I followed a thread on here and got the seatbelt out of a 90s corolla (I think) from the pick-n-pull.
it was $12, Perfect OEM color match (even aged to match), all OEM stitching, and I gave the retractor spring an extra turn on reassembly so it retracts better (as was suggested in that thread).

My passenger belt didn't have the same issue of missing 1/4 of it at the shoulder, so I just took it off the retractor, pressure washed it, and put it back in. Pressure washing makes it look new. (just don't get close with the pressure washer, I had a 15 degree fan on a little electric unit and kept it a foot away)

Unfortunately that was probably 7 years ago so I don't recall the exact thread.

jht3 said:
@Pascoscout how'd the belts come out? mechanism cleaned out while they replaced the webbing?

@desmocruiser, @Shumi90 how'd the belts come out?
Click to expand...

Belts came out great. Color is not perfect but close enough. It looks like they cleaned everything. They function like they are new.
1997 FJZ80

Update: got my belts back today. day 8 if you're counting. I'm in VA, they are in GA. Pretty fast as the weekend got in the way.

The Grey is a very close match. While the style of webbing is a little different as compared to the 3rd row belts I didn't send in, they are close enough for me. Stock 3rd row on left, rebuilt 2nd row on right. I recall someone said SafetyRestore re-attaches the factory labels? Well MyAirBags doesn't go that far. They did replace the stop buttons at $2.49/ea. 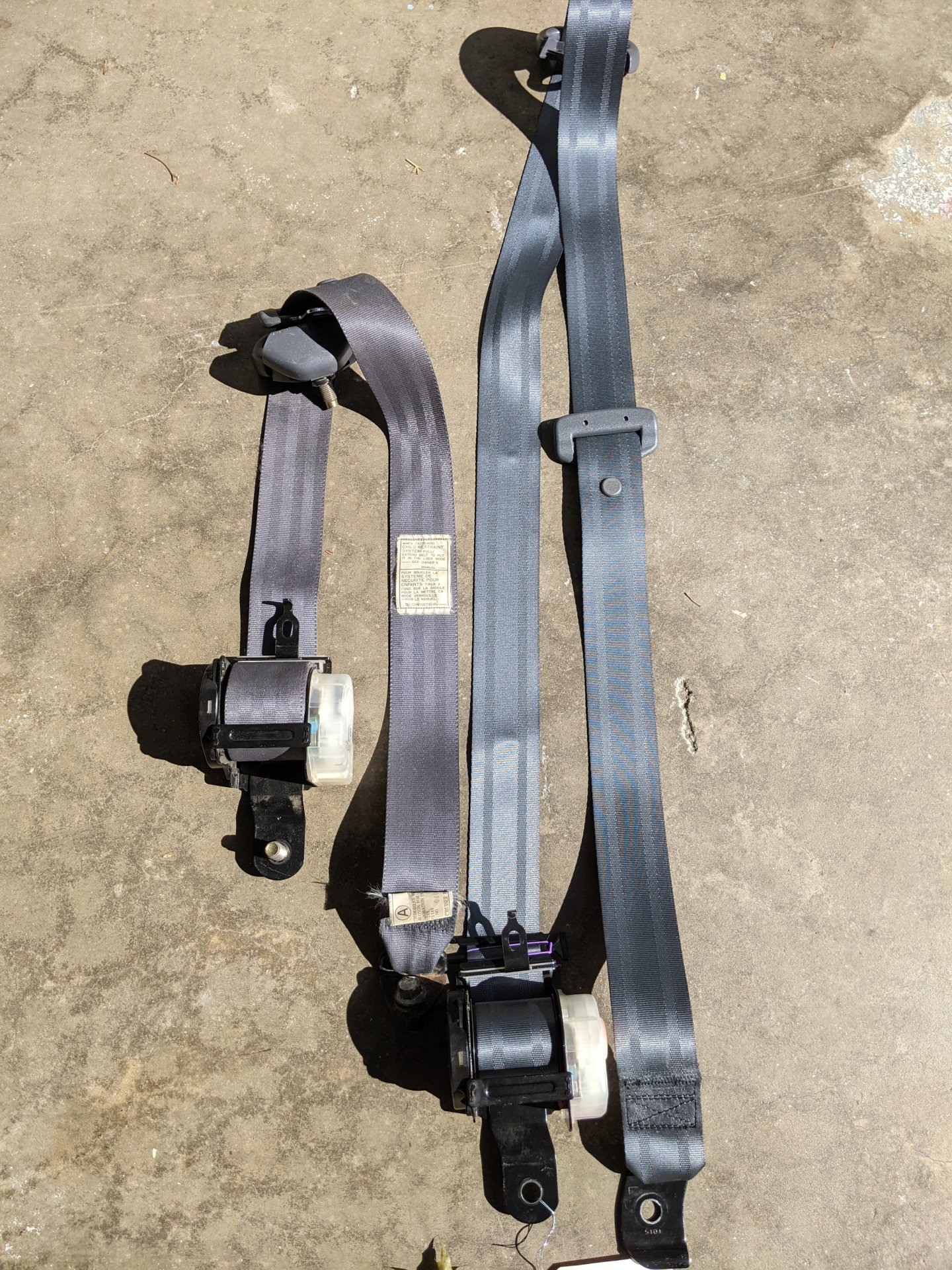 Now the bad. I thought something looked off with the front passenger belt, but when I went to bolt it in I was completely flabbergasted. It won't fit into the B-pillar recess. Without contacting me, they cut off the lower mount point and grafted it to some other tensioner assembly. There is no chance it will ever fit. The left and right front belts used to look identical, except the lower mounting point was black on one side and gold on the other. 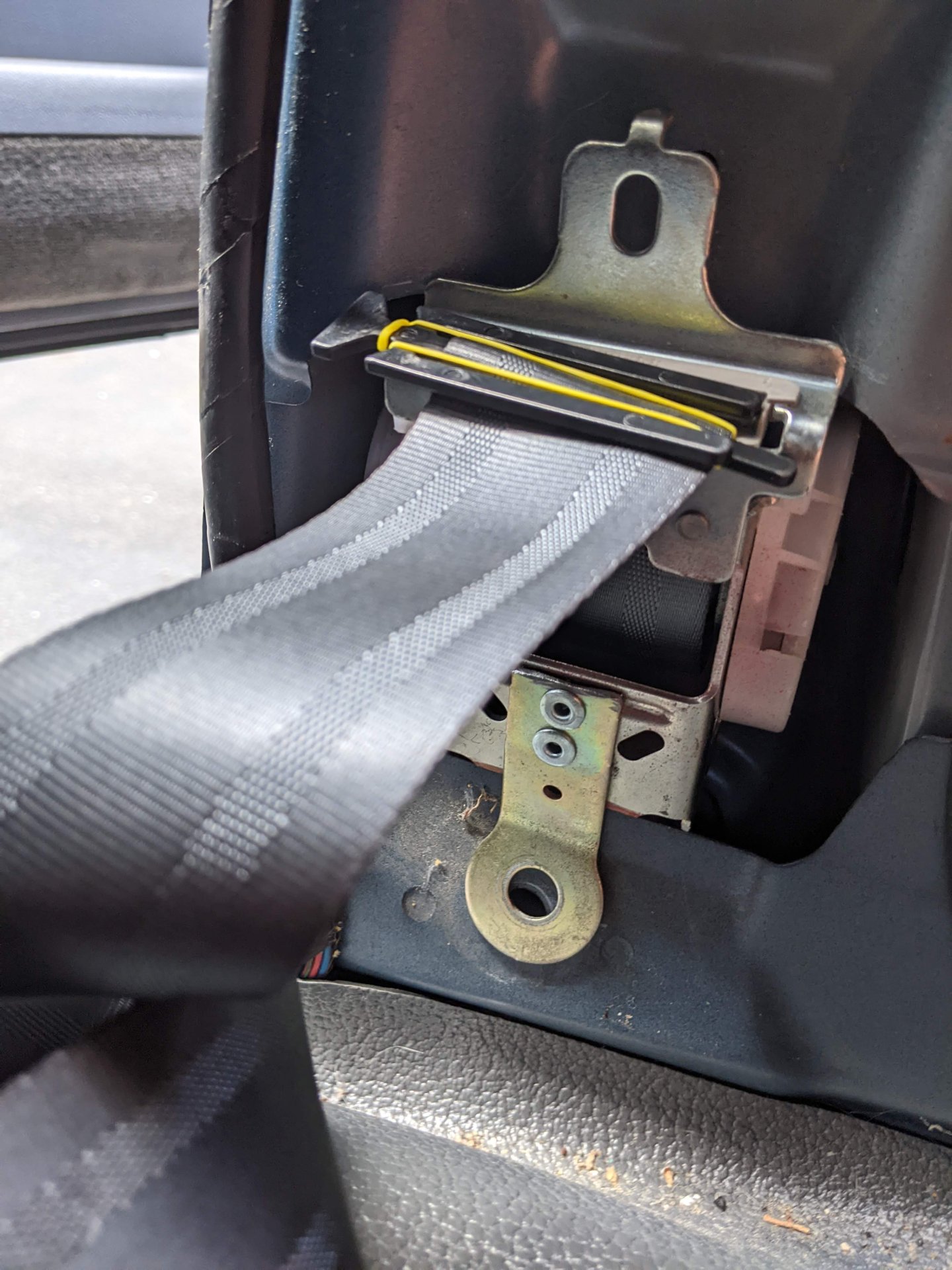 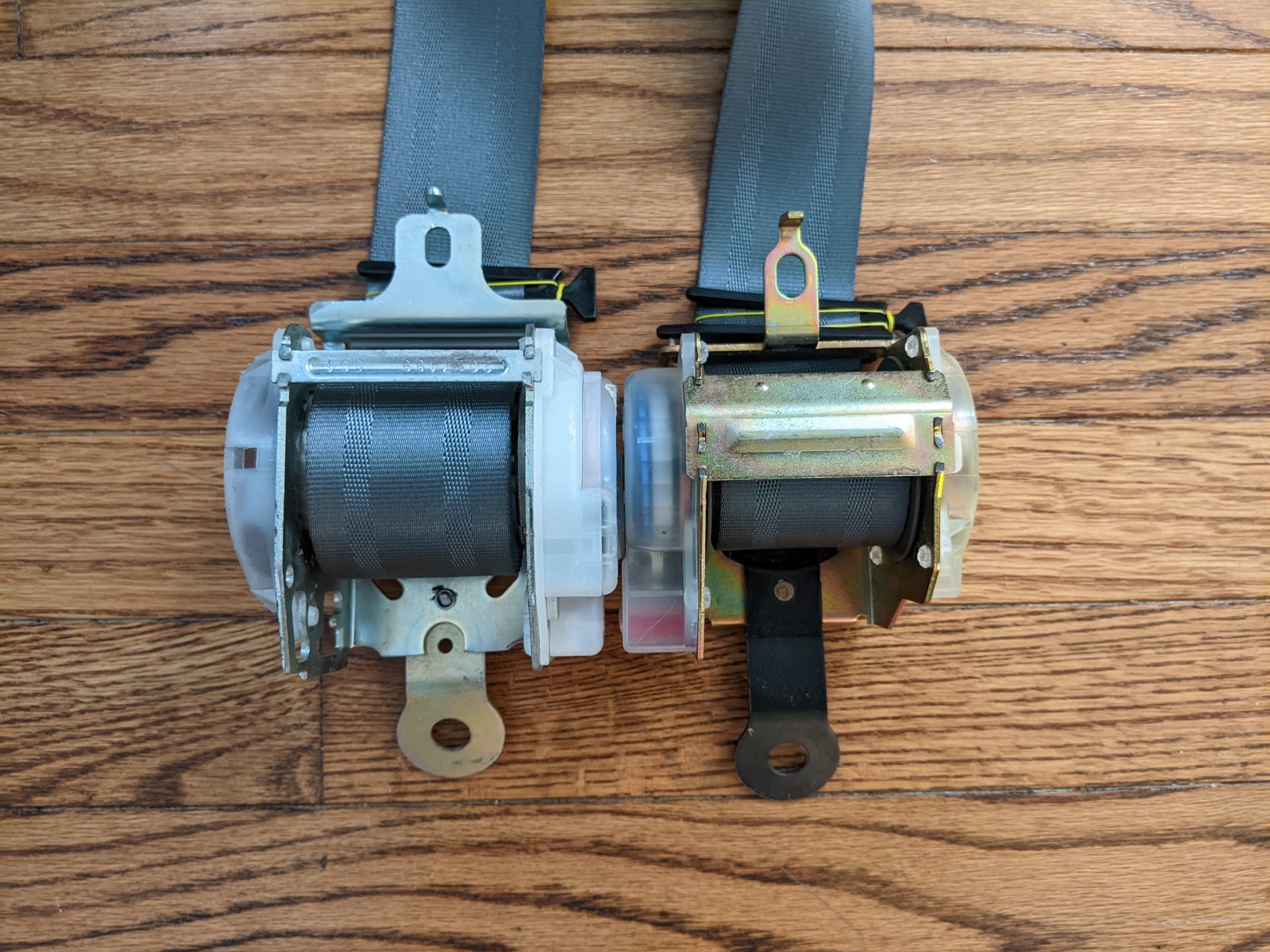 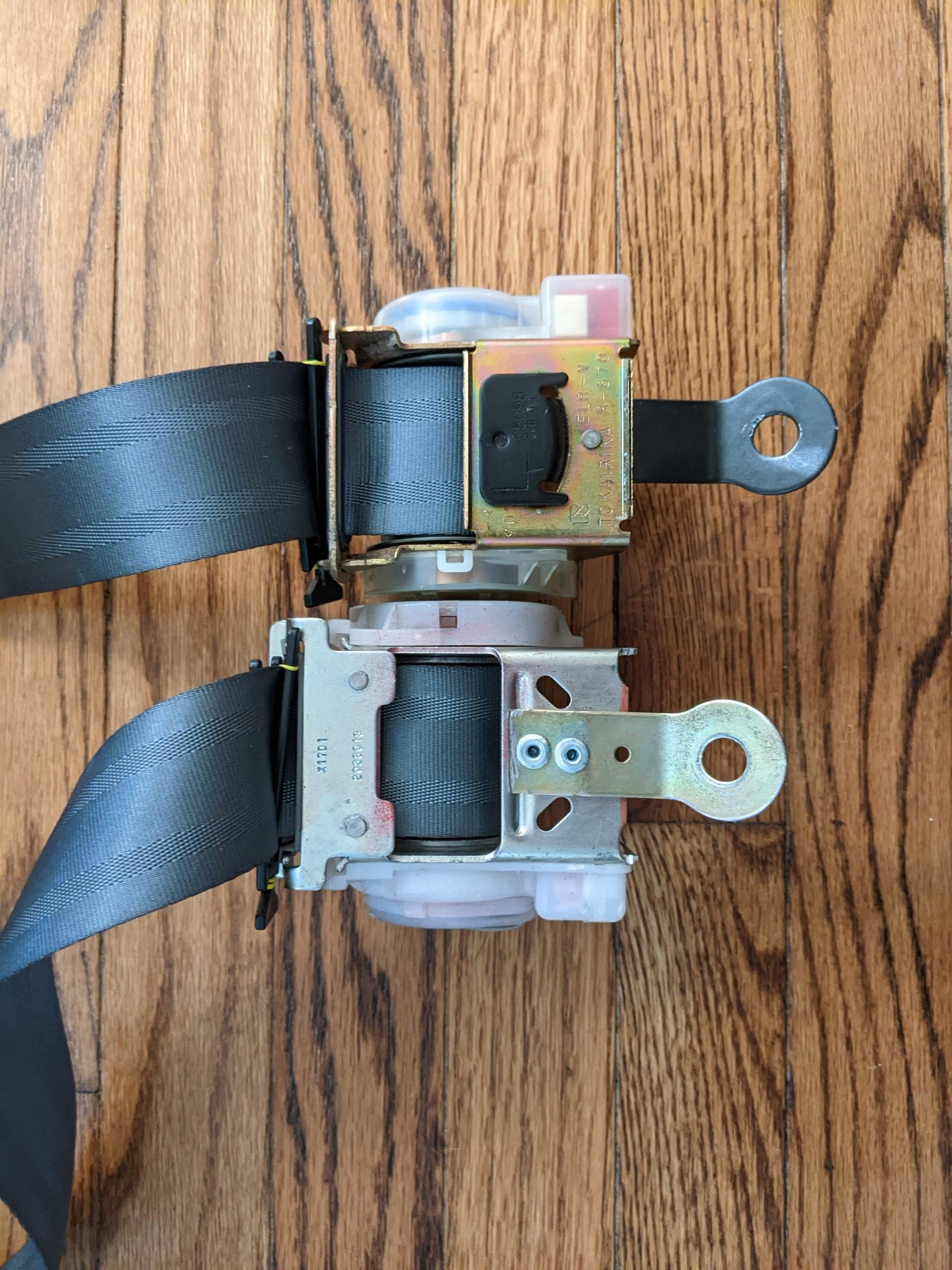 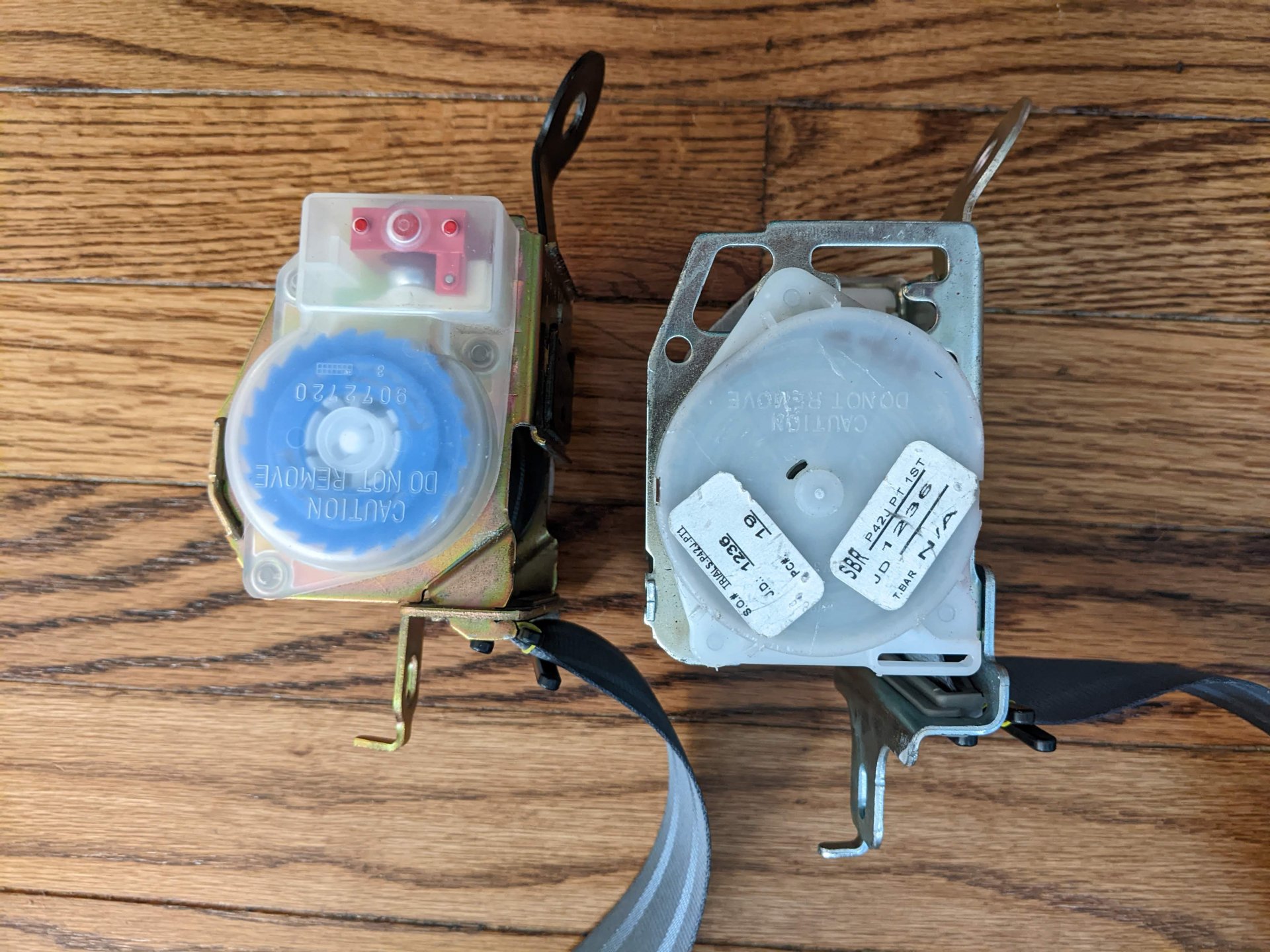 Of course they stop answering phones at 5pm, but I left them an email. Not sure HOW they will remedy this situation. Would have been nice to get a txt, call, or email about this belt before they took it upon themselves to "fix" it. They were VERY communicative otherwise, with updates all along the process.

9/1 update: Talked to the tech, and he apologized for not calling me before attempting his repair. he says the pass side retractor mechanismn was actually broken internally (gears and such) and beyond repair with parts he had available. i would have preferred they refund me for that belt and ship it back as-is with three new belts. but here we are. his solution was to use a retractor that was close enough, and rivet on the lower ear from my housing. his measurements were close, but unlike horse shoes and hand grenades, precision matters here. the housing is still too big in spots and won't fit inside the recess. he says he'll work w/ me to make this right, including me sending back this belt and attempting to repair the internals of my retractor he still has. but not sure how THAT will work seeing he cut off my mounting ear. i think the better solution is to source a used belt and send that back, so he can swap over the new web, etc. now on the hunt for a good used pass side retractor...could not care less about the belt or anything else. anyone?
Last edited: Sep 1, 2022
1995 FZJ80
1995 4Runner

UPDATE: on a hunch, i dug through a couple zip lock bags full of misc screws and bolts i got from the prior owner. what do you know. the missing spacers and washers!

Follow up question, I think I'm missing bolt spacers at the lower mounting points. Lost by a prior owner? I have one bolt, one thin plastic washer, and one thick split washer. I'm guessing this spacer and second split washer are unavailable without buying a whole new belt, which only the drivers side is available.

Found a pic of a new belt in the classifieds and circled the parts in question: 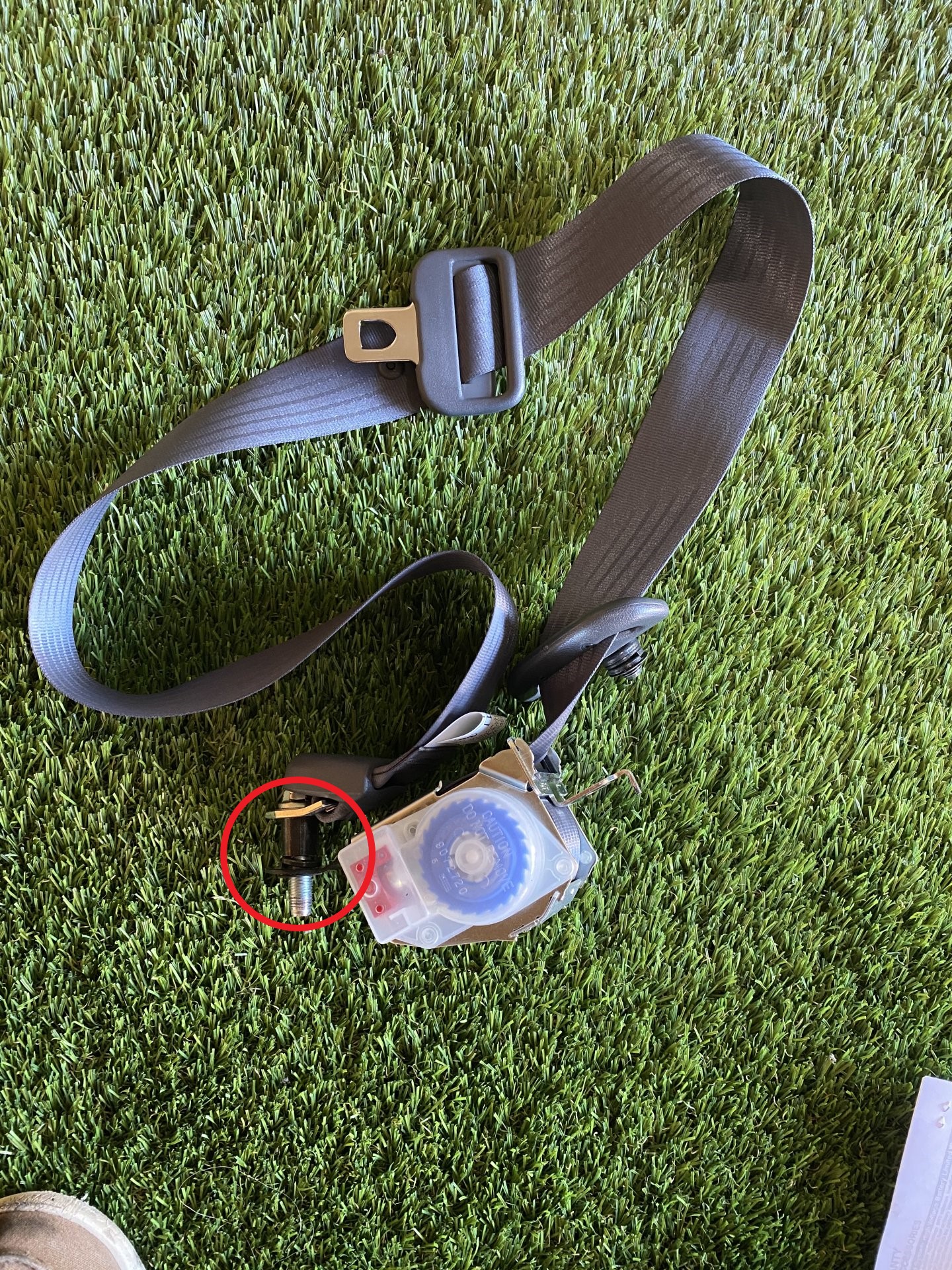