I've searched the archives and can't find the info i'm looking for.

I did find lots of info on 4speed clutch alternitives to the $300 clutch kit from AA.

I'm lookin for an alternitive clutch/pressure plate combo to use inplace of the 300 buck AA set up.

I also need to know what kind of throw out bearing i will need to use. I know that the 4 speeds re use the LC T/B but have no idea on 3 speeds

I believe any old Chevy p-plate and clutch will work with a three speed.

I could well be wrong, but I'm pretty sure the correct answer is either in the wiki or the old tech links.

i wouldn't trust wiki for beer trivia....but mud tech...i'd put some cash on that!

anyone with real time experience would be great. I want to hit up carquest on my way home and order my parts.

In my first FJ40 (30 years ago) I used the Downey adapter and the stock Chevy pressure plate (diaphram type) and disk in my 3-speed/SBC conversion. the spline count is the same but the is a few 1000ths difference (smaller) in the spline width, but it never affected the performance. If I recall, you also need to change out the pilot bushing to accept the FJ40 input shaft.

cool, any idea what year/vehicle clutch set up you were using and do i use a 40 pilot or do i need to source it from AA?


did you reuse the 3 speed throw out bearng?

My 74 came with a factory 4 speed and a 3 finger type clutch (standard for 3 speed). This leads me to believe that the clutch would be the same for both transmissions.

For my 350 conversion to Toyota 4 speed, I followed Downey's Instructions and used a "standard 11 inch low diaphragm type clutch". Many parts guys had trouble with this... I ended up bringing in a Toyota diaphragm type clutch, and asking for a Chevy one like it. They matched me up with a 11" low diaphragm LUK clutch that was used in a host of Chev vehicles in the early 1970s.

I also used a stock Chev pilot bearing. This combination has been working well for 15 years... Even behind a 300 hp motor and with a 17 year old kid learning to drive stick on it.


i have the 360 downey bellhousing

any idea how i have to mod the push rod coming out of the slave to fit the downey clutch fork?

i'm assuming i have to cut it...or is there a special push rod i have to use?

While the Chevy 10 spline disc will fit on the Toyota input shaft, technically the cut of the splines is different. Chevy splines are square, Toyota are tapered. There is a risk of slop or premature wear. Some of us, have a Toyota disc hub mated with Chevy disc material. That way there is no slop or wear on the input shaft.

There are also many who run the Chevy disc hubs without any issue so it's your call.

I didn't have to cut my push rod - it adjusted up just fine although I've seen some posts where people have had to make modifications.


i have the 360 downey bellhousing

any idea how i have to mod the push rod coming out of the slave to fit the downey clutch fork?

i'm assuming i have to cut it...or is there a special push rod i have to use?
Click to expand...

I'm thinking i might need a thicker push rod that is adjustable.

Will my yota disk work with any low profile chevy pressure plate?

It's a newer clutch and in great shape

and what year GM vehicles had this low profile plate?

i also looked up the luke 04-072 IIFC and it looked like a standard clutch, not low profile at all!!!

Lots of people use the Chevy clutch disc on the Toyota input. Years and years of lots and lots of people and in the real world it causes no problems.

The "Three speed" and the 'Four speed flywheels, and pressure plates are completely different. The clutch disc is the same. The forks, throwout bearing and fork pivot are different too.


But... WHY would you even bother to do the work to install a smallblock in front of a Cruiser THREE SPEED transmission?????

In complete seriousness you could not pay me to do that combination. You are better off to leave the rig sitting until you can do it right and put a 4 speed in there.

That three speed is worth a few cents or maybe a buck or two as scrap. That is the only value it has IMHO.

the rig is my DD...blew up the day after i traded.

got a great deal on the 3 to SBC adapter and SBC motors are a dime a dozen.

Not to mention i have 2 3 speed trannys on hand.

Can't leave the rig on blocks!!!

Eventually i'll throw in a 700r4 but until then i need my vehicle.

I thank you for the input but i really need to know what chevy vehicles had a low profile pressure plate and 10 spline disk.

Here is a post with vehicles with low profile clutches

that is the part number for a 12 inch clutch


NikP said:
Here is a post with vehicles with low profile clutches 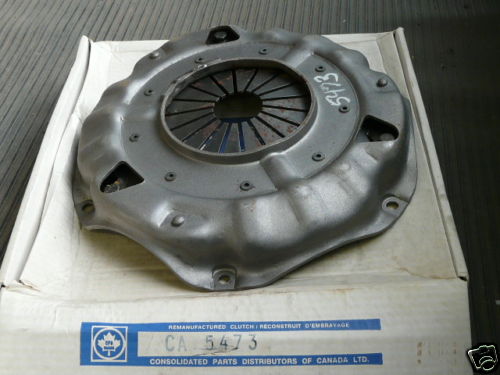 Why not combine that flat GM 11" pressure plate with a stock LC clutch disk? The 275mm LC clutch works out to 10.8" and has the correct tapered splines in the hub?
I don't own one and haven't put one together (V8 LC) but thats the approach I would try

IIRC I used a centerforce clutch setup in my swap on my 71.

to get the proper clutch/pressure plate/pilot bearing combo ask for a clutch for a 1968 checker marathon.

11" short throw disk.
You must log in or register to reply here.

R
Toyota PTO clutch lever broken: anyone have a spare