Well, I got a surprise while doing a routine rear axle service on a FZJ80. Out of curiousity while the axle shafts were out I ran one of those telescoping pick-up magnets into the axle housing via the spindles not expecting to find anything. The right/short side had essentially no debris but the long side (where the breather vent is located) had quite a few flakes/particles of rust.

The differential drain plug magnet also had more than the usual amount of magnetic dust or "beard" along with some small flakes of rust that crumbled easily (see photos). Ran a couple different magnetic wands in and out a couple dozen times and followed that by flushing the axle tubes with a couple quarts each of kerosene and saw that more rusty flakes/debris were washed out into the collection pan.

Since I've owned this 80 it was never driven into deep water however I did find that the rear axle breather valve was stuck open so every time the axle housing cooled off after a drive it likely sucked in the humid air of this region.

So planning to send out a sample of the used gear oil to Blackstone Laboratories for analysis but it does not look milky and doesn't layer out after sitting overnight. I'll do some more flushing, might run 2" cylindrical brush into the axle housing via the spindles to knock off any remaining loose flakes, flush again, etc,etc.

Some people might want to pull the diff carrier or even drop the axle housing all together and pressure wash the inside of the axle, maybe treat the inner surfaces with a phosphoric acid product (with diff removed) to kill/stop any rust. But I'm thinking between the flushing, brushing and some extra magnets to grab any loose rust particles along with a new functioning breather I might get away with watchful waiting for now.

The main point of all this is to remind people to check your axle breathers, particularly the rear which is harder to get to than the front so easier to ignore. It can be accessed by removing the left rear wheel (after jacking up the vehicle, installing jack stands---) and reaching/leaning in on the front side of the axle. FWIW

This is what came out with the first few passes with the magnet. Probably got that amount on the magnet 4-5 times from multiple passes in and out. 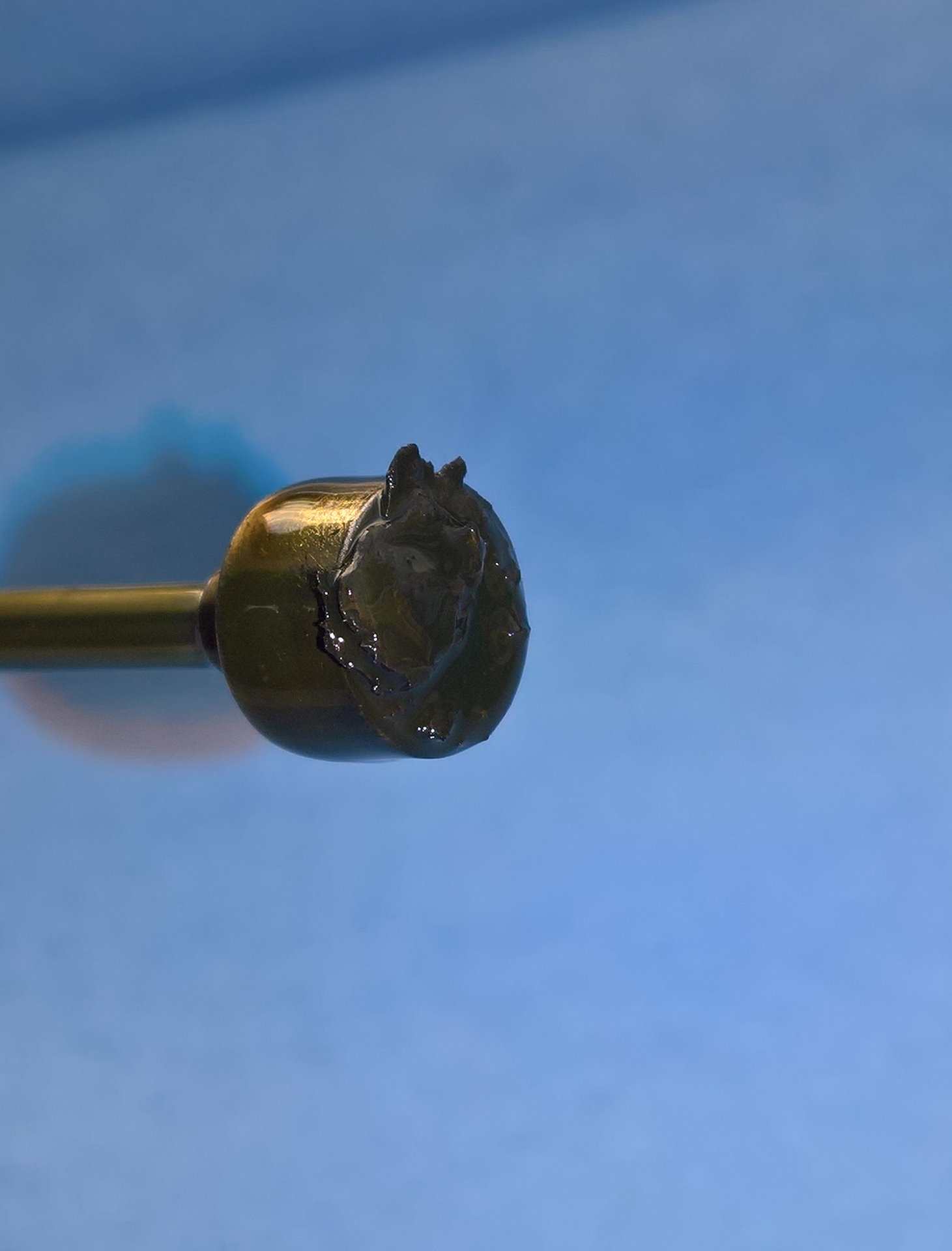 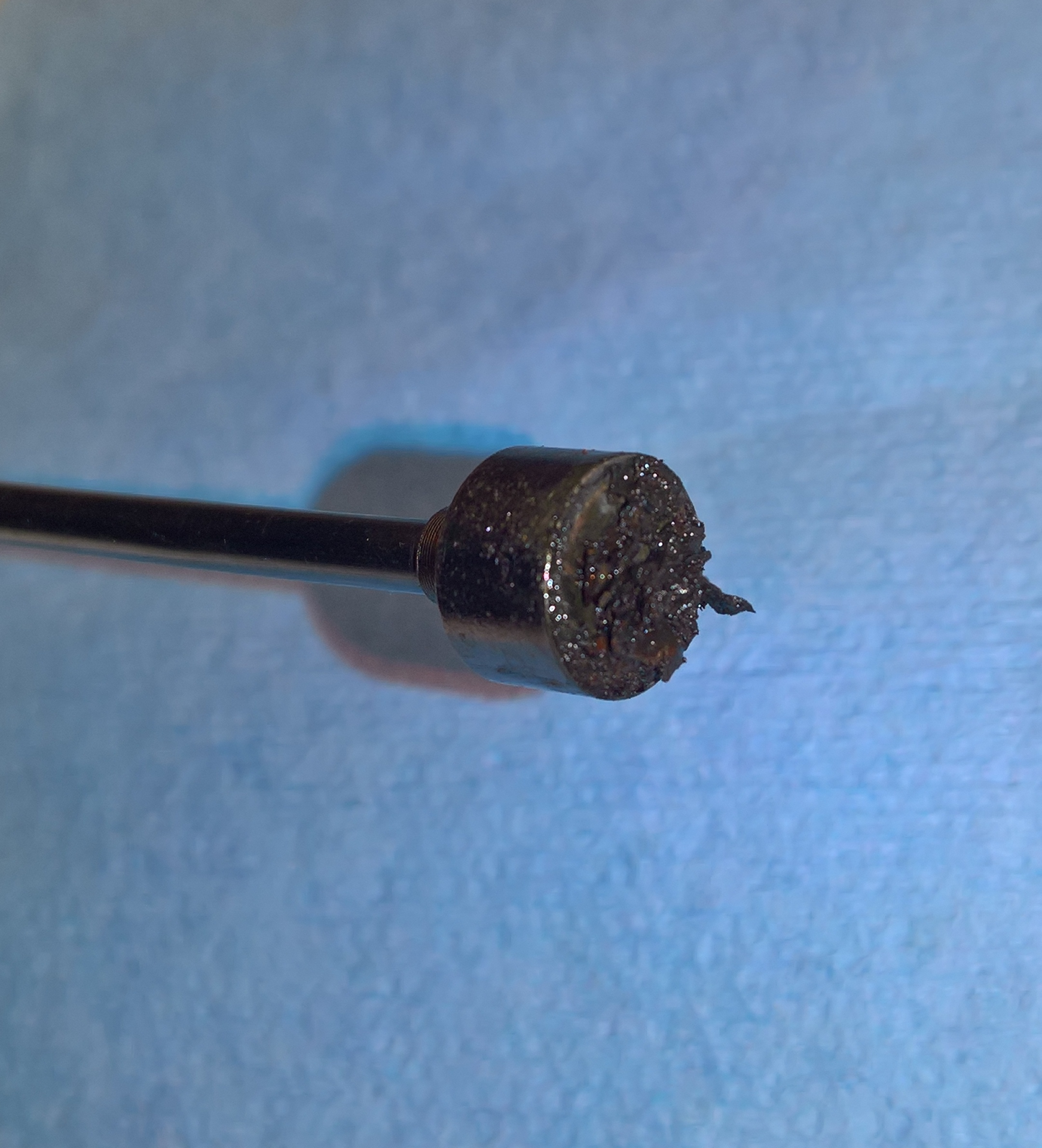 This shows the larger magnetic pick-up tool with a stronger neodymium magnet added for more power but most of the junk had already been cleaned out by the smaller magnet (what could be picked up with a magnet at least) before I tried this one. 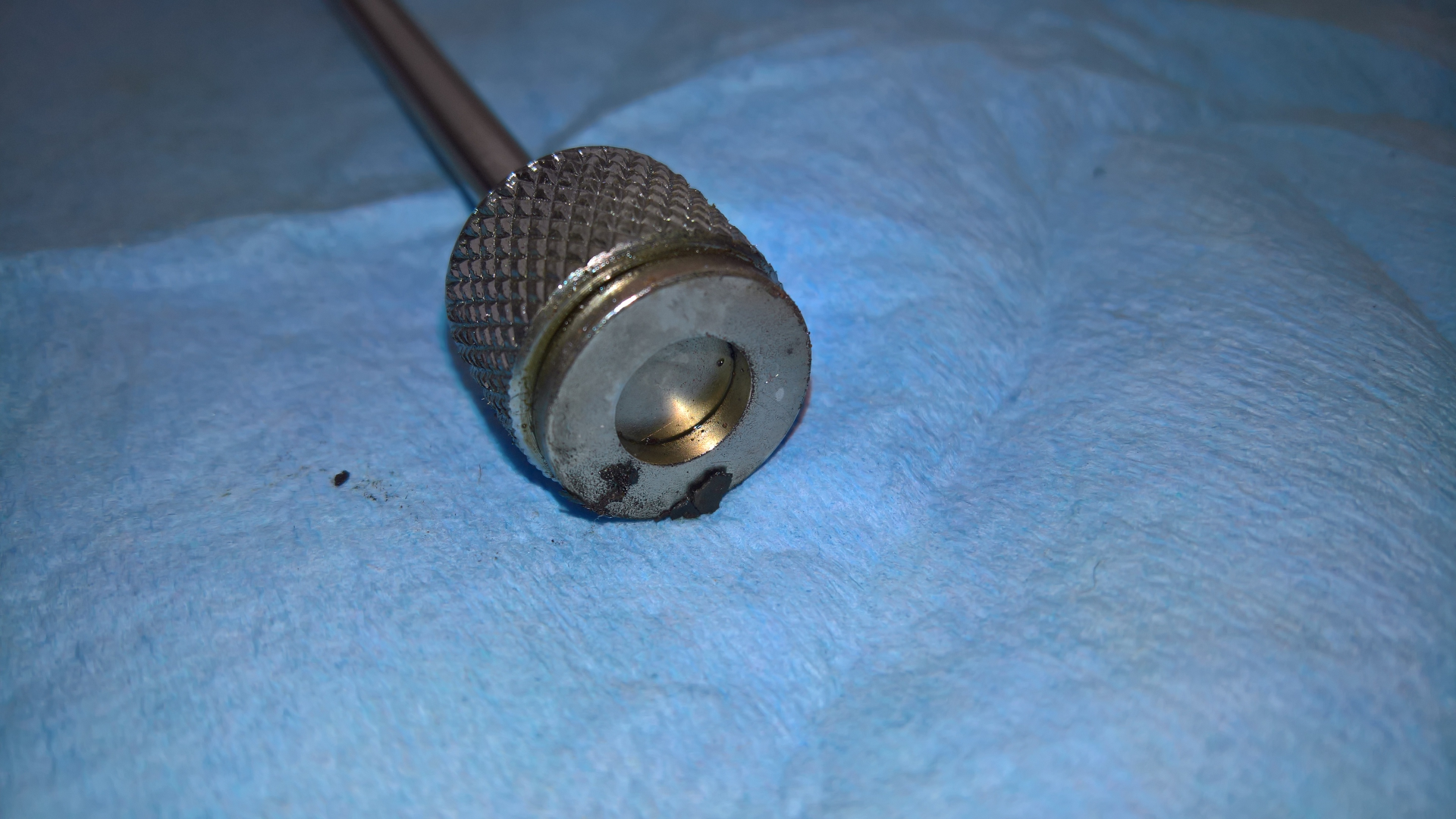 This is the drain plug which was partially/gently washed off with solvent to better show the debris before it was touched, most of which turned to mush when wiped off. The black color is due to a Moly gear oil additive.
Cllick photo twice to magnify 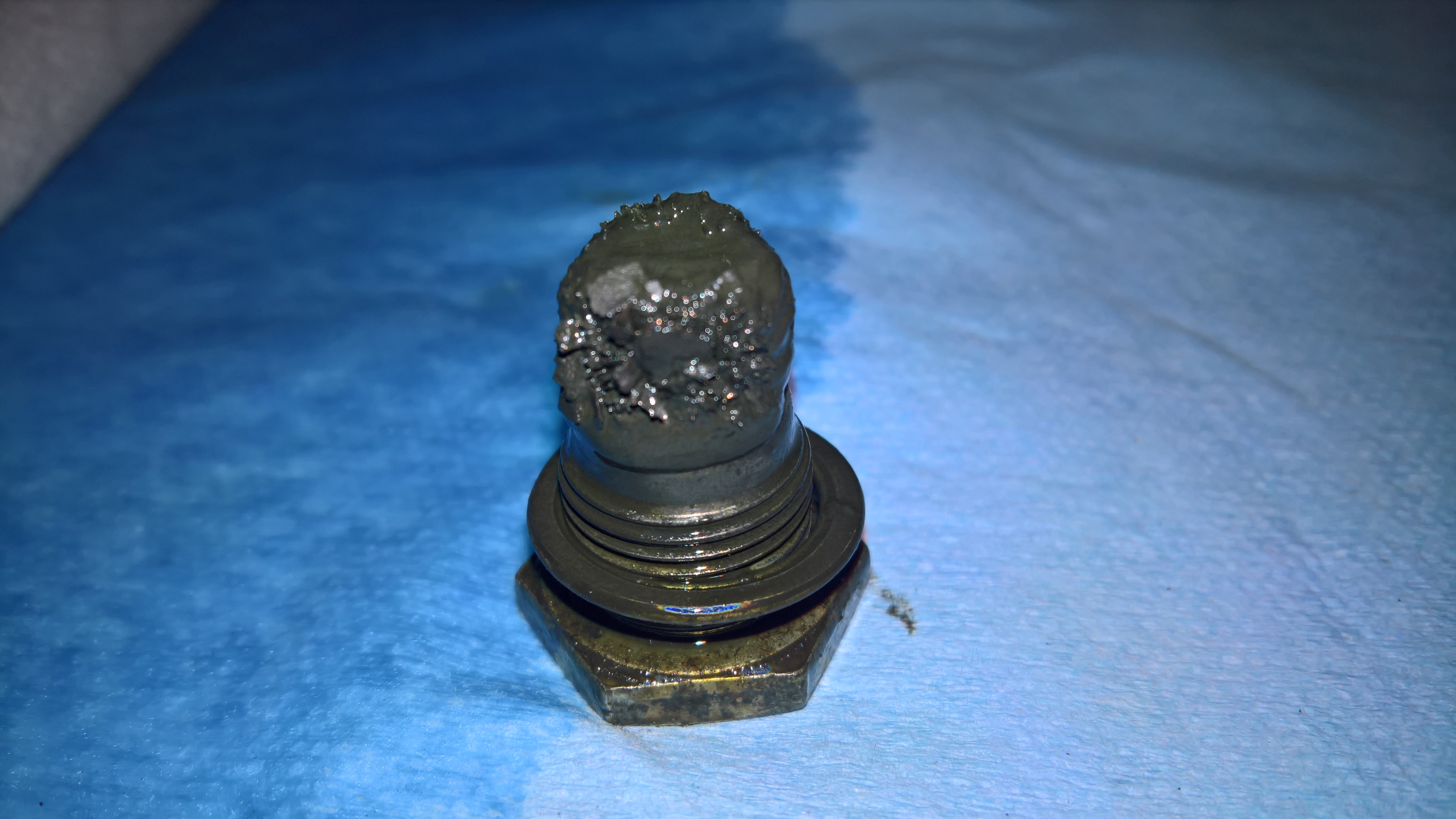 This is looking in through the left side spindle tube. Click twice to magnify for more detail. You can barely make out what looks like dark ?rusty patches on the upper aspect/roof of the housing. 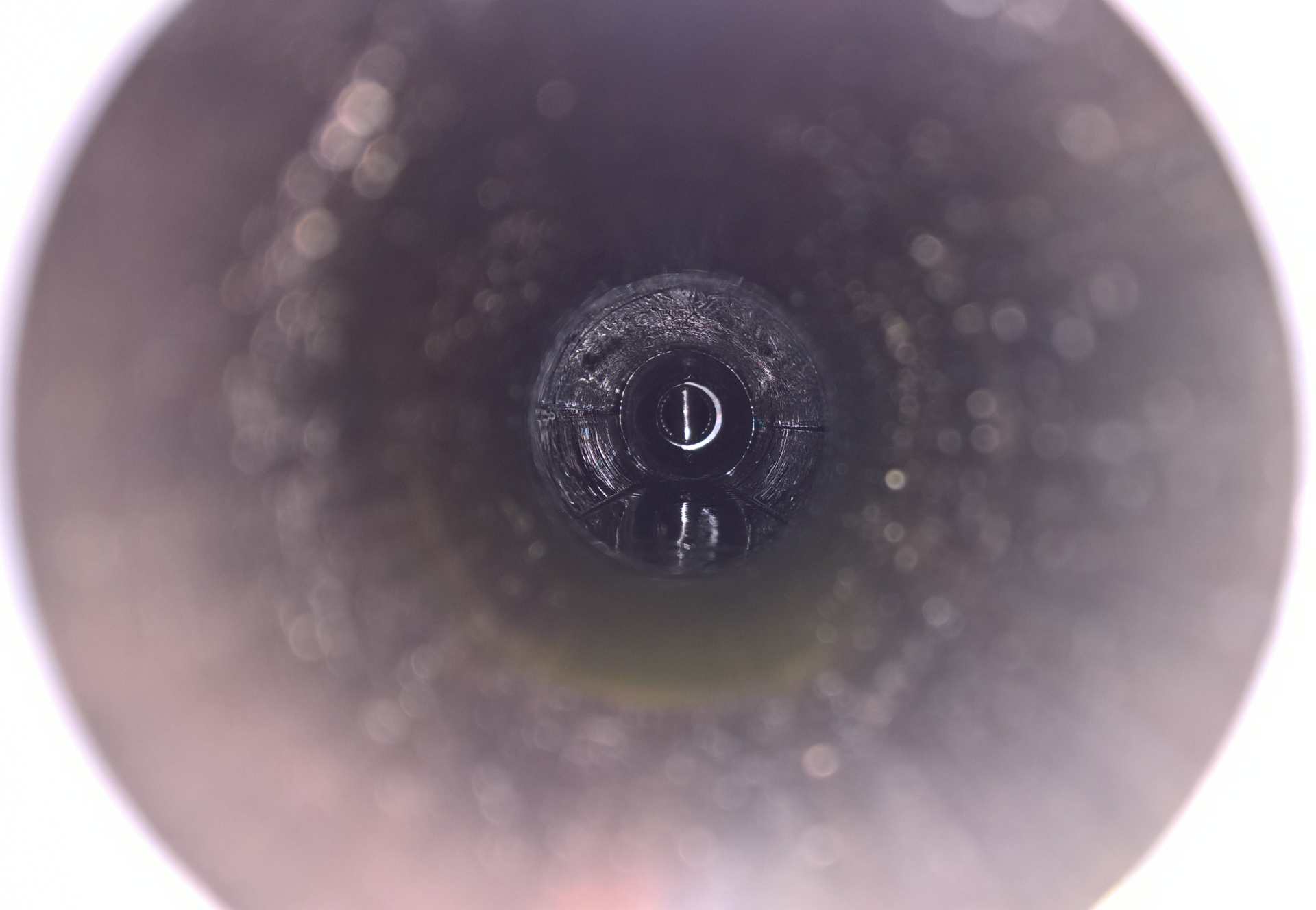 First shows the rear axle breather (wetness due to penetrating oil sprayed on bracket mounting bolt from both the front and from inside the crossmember). Photo taken from left rear wheel well looking in and rearward, tire removed, vehicle up on jack stands under the frame. (Also found a missing hole cover seen in the background) 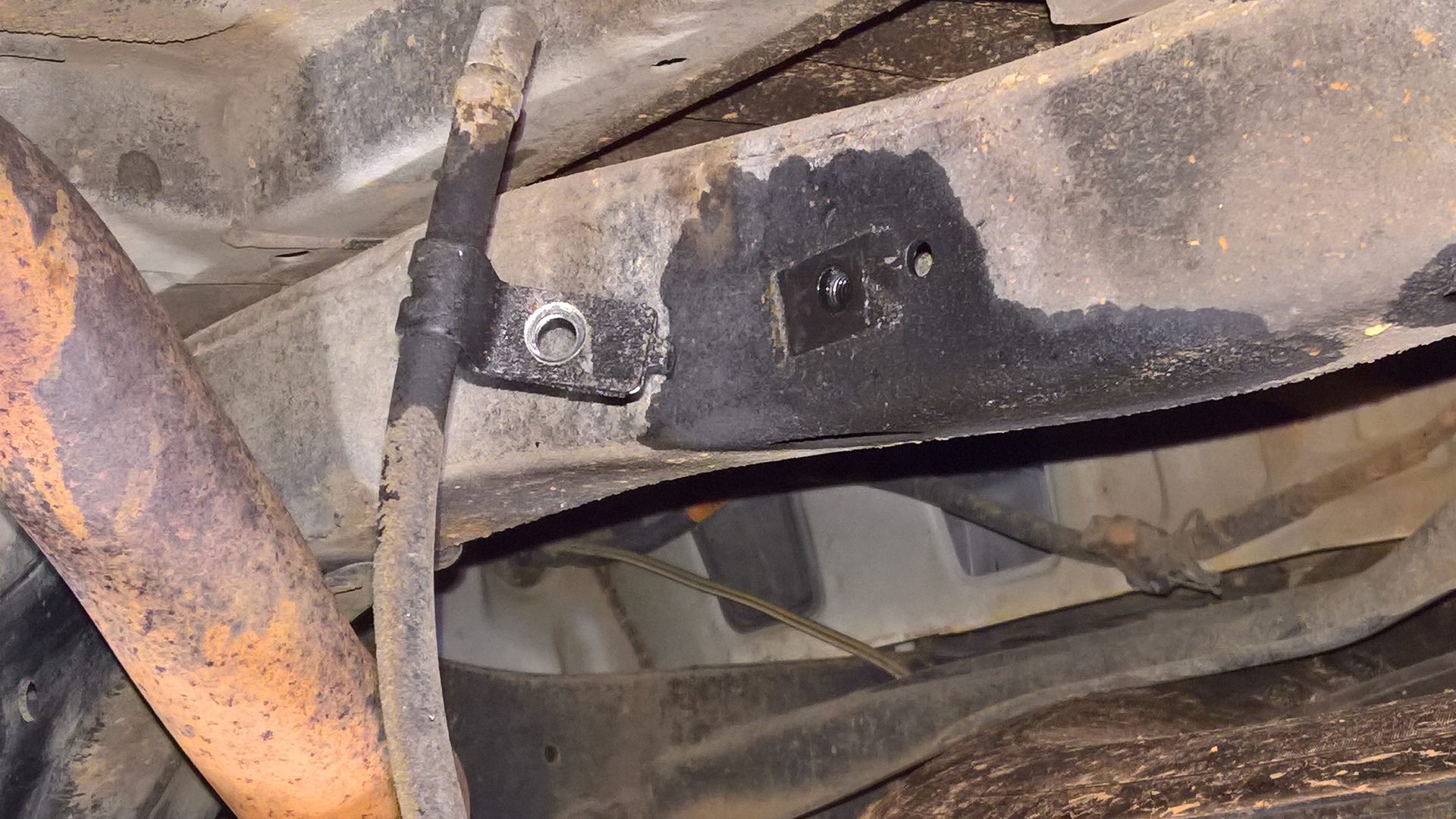 The original axle breather after being dismantled and cleaned up. When first opened the spring and rubber puck were both found stuck on the inside top of the cap (ie: full open): 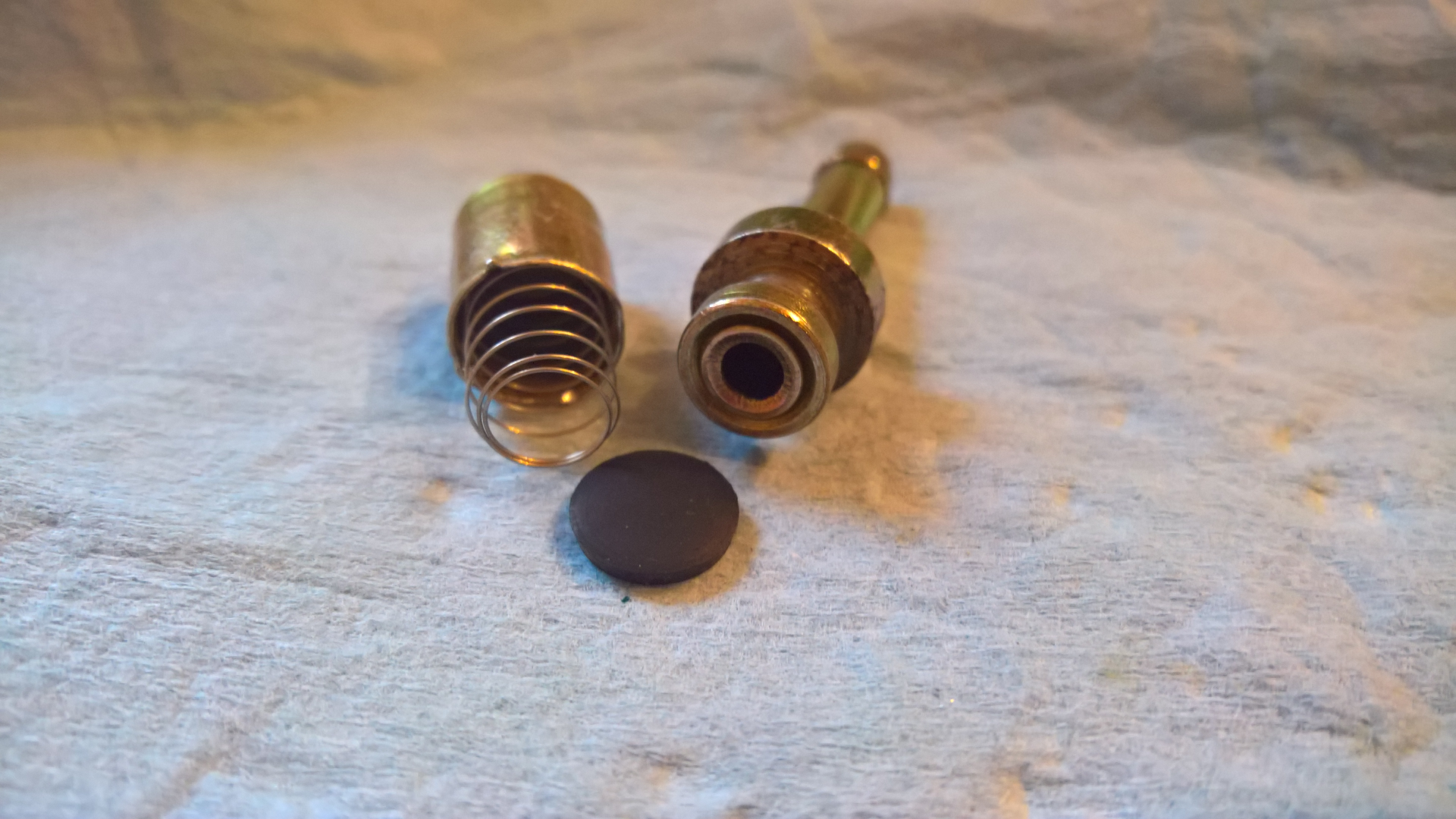 Photo taken while kerosene flush was pouring out of the differential drain hole. Note the flakes and particles of rust (double click photos to magnify): 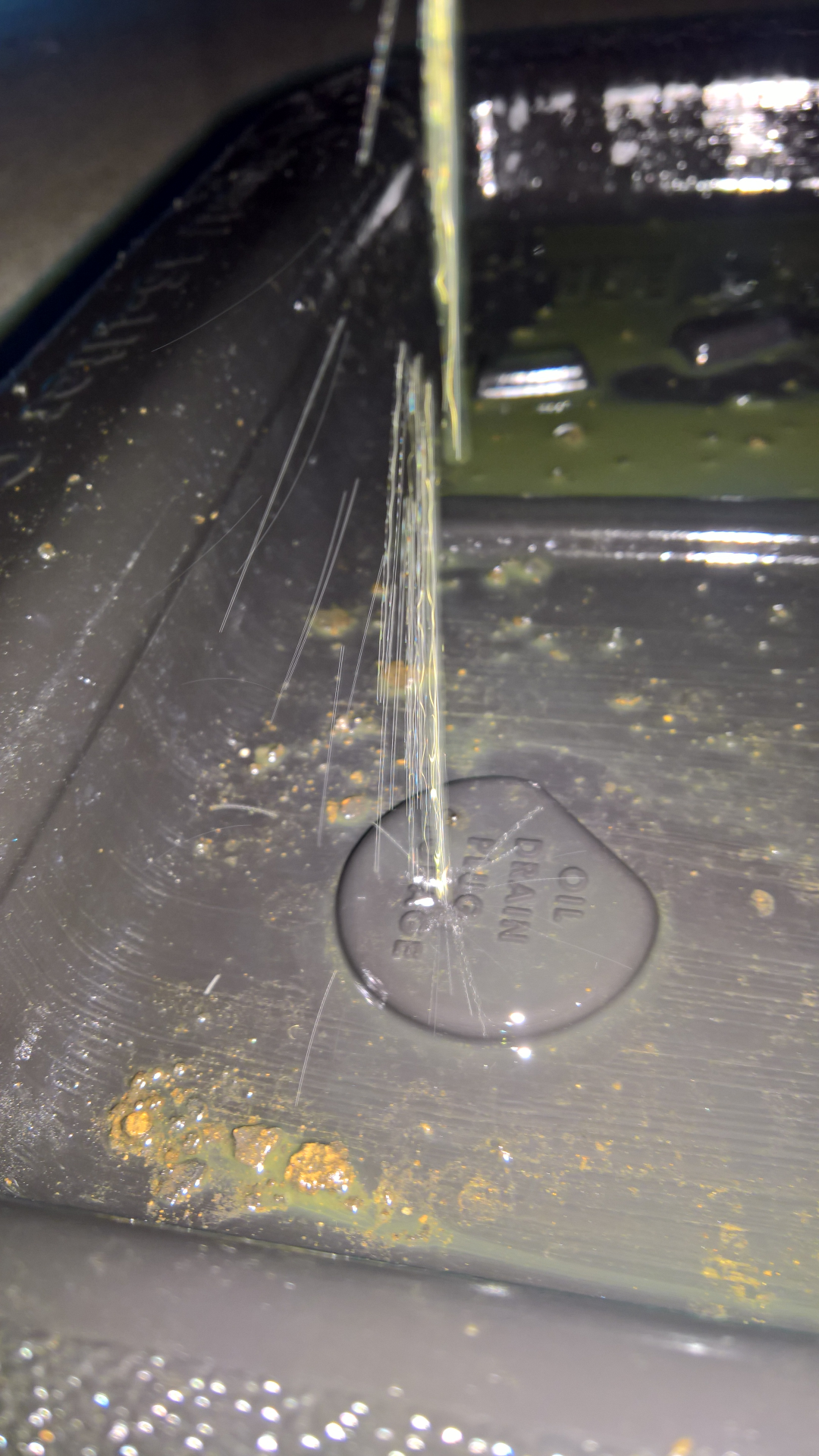 Another photo (a bit out of focus) of the drain pan during the kerosene flush but it gives an idea how much rusty debris was still inside the axle housing/diff even after using the magnets in and out a few dozen times: 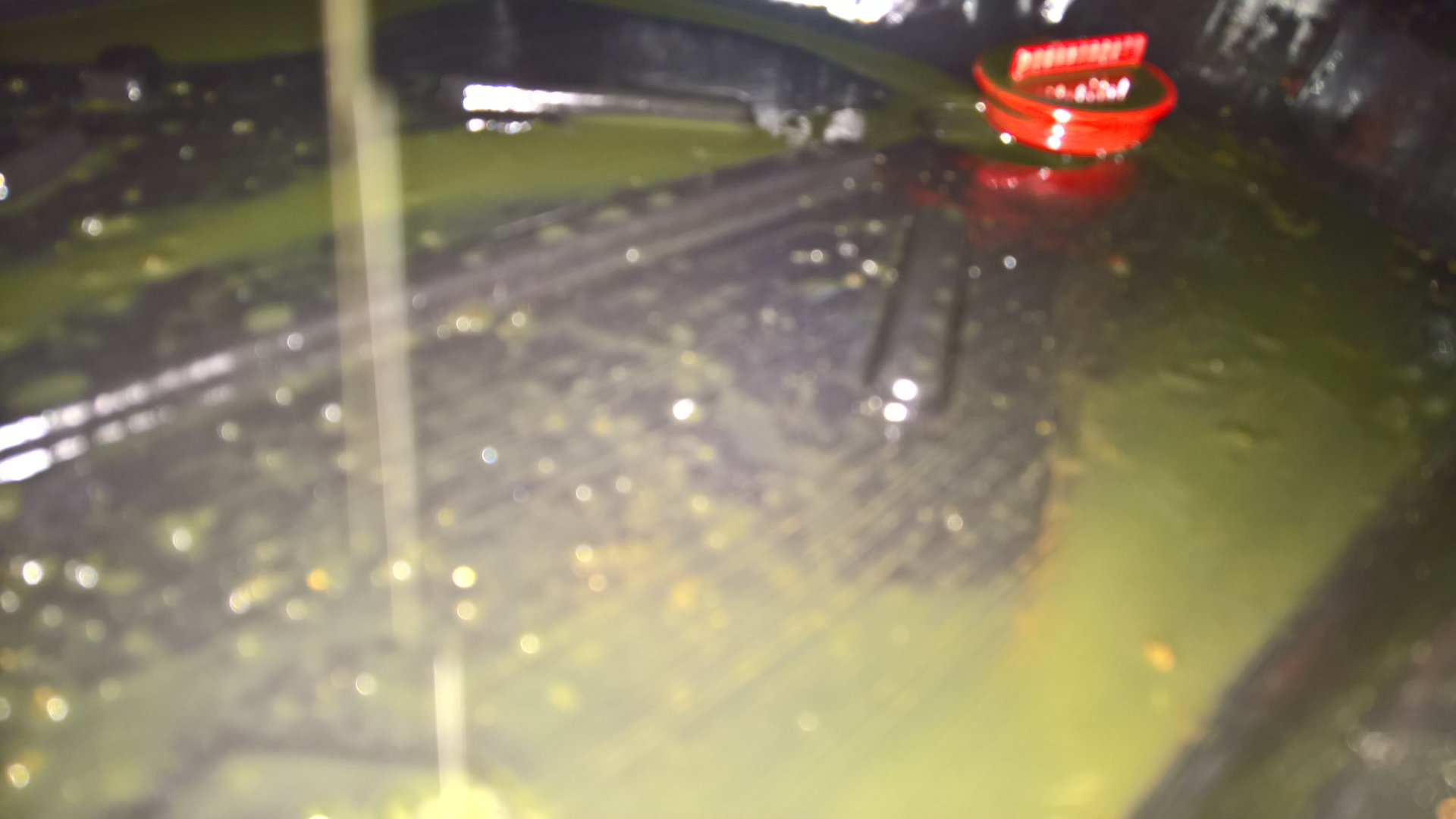 This view shows how the kerosene was introduced into the axle housing via the spindle tube(s). Some kerosene wanted to run out of the tubes, I just held a rag tightly against the flexible funnel thingy and the spindle.

After the flush I sprayed some WD 40 penetrating oil into the axle housing from both ends and plan to do some more cleaning/flushing with solvents and kerosene until the flush comes out clean. 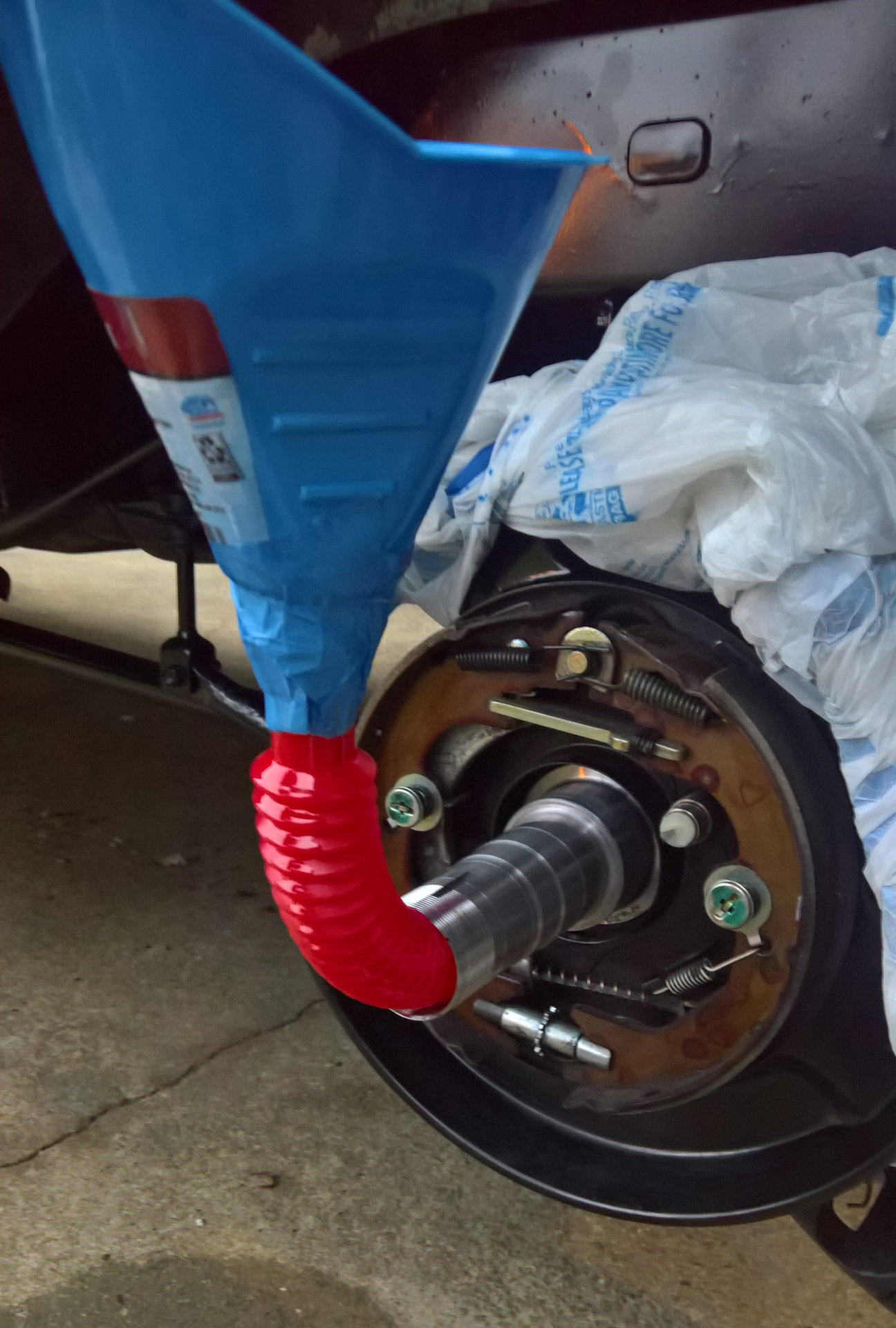 It's actually not uncommon for air spaces in drivetrain components to have some rust/vapor driven corrosion due to condensation and air exchange. I would not go wild on further cleaning (phospates, etc) as I worry it may affect what really matters - the bearings. The roof of the diffs doesn't get splashed and coated with oil like the engine's crankcase (another relatively large airspace with oil), so it would be susceptible. One thing you might consider while messing with the vent is to pry it off and put a chunk of fuel line up and into the space near the tail lamp with a cheap lawnmower fuel filter held on the tip with a zip tie. This raises it considerably and avoids the "sucking in" effect such as when you back in a boat trailer and immerse the rear diff. Overall, nothing here to worry about at all. Extra points for anal retentiveness with the magnets, however!!
Buy Head Gasket DVD for you OR for your mechanic HERE

Some axles have excessive rust...didn't end up using this one as it turned out to be bent also. But supports the statement that rust on the top happens from not getting splashed. 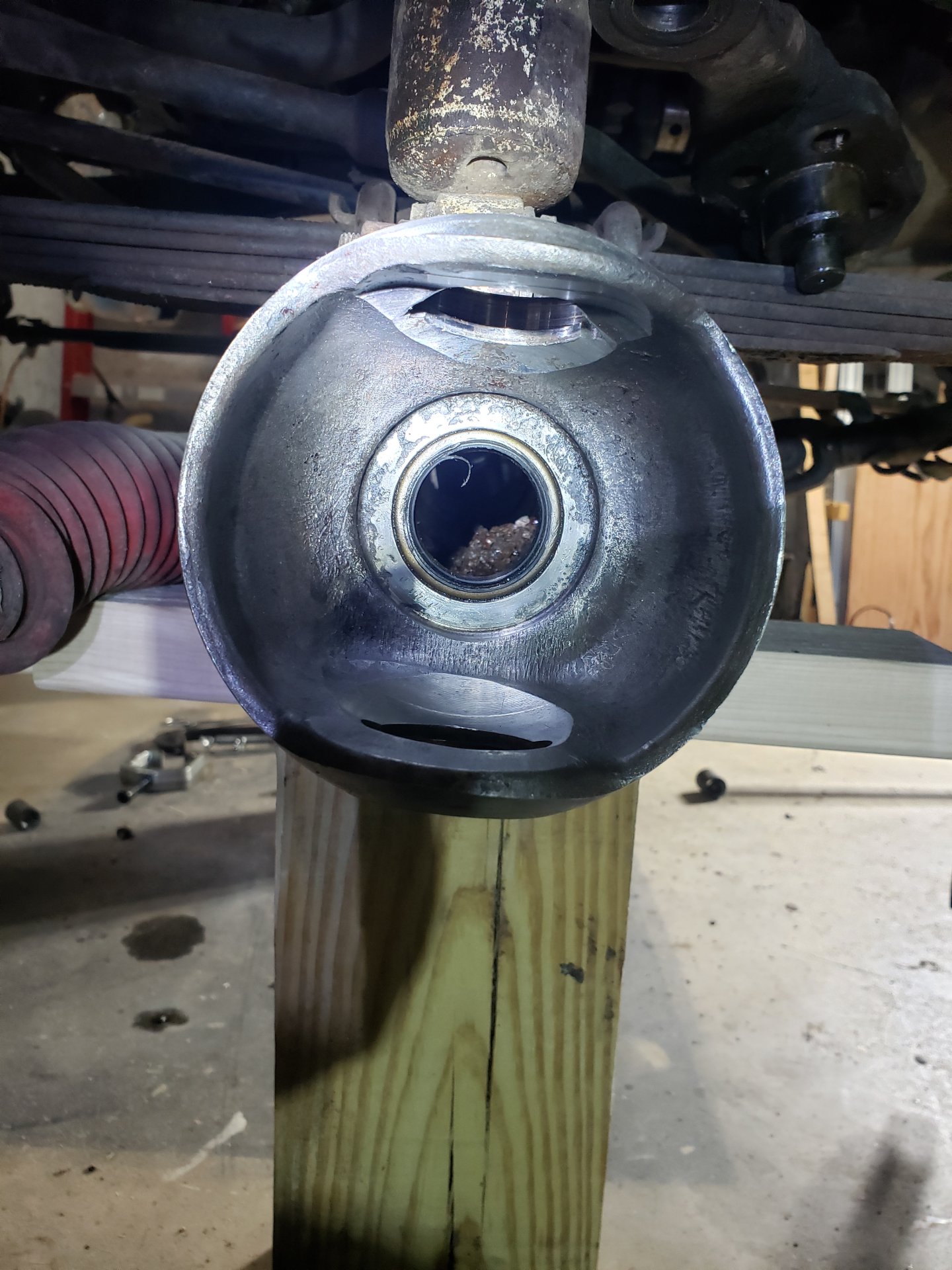 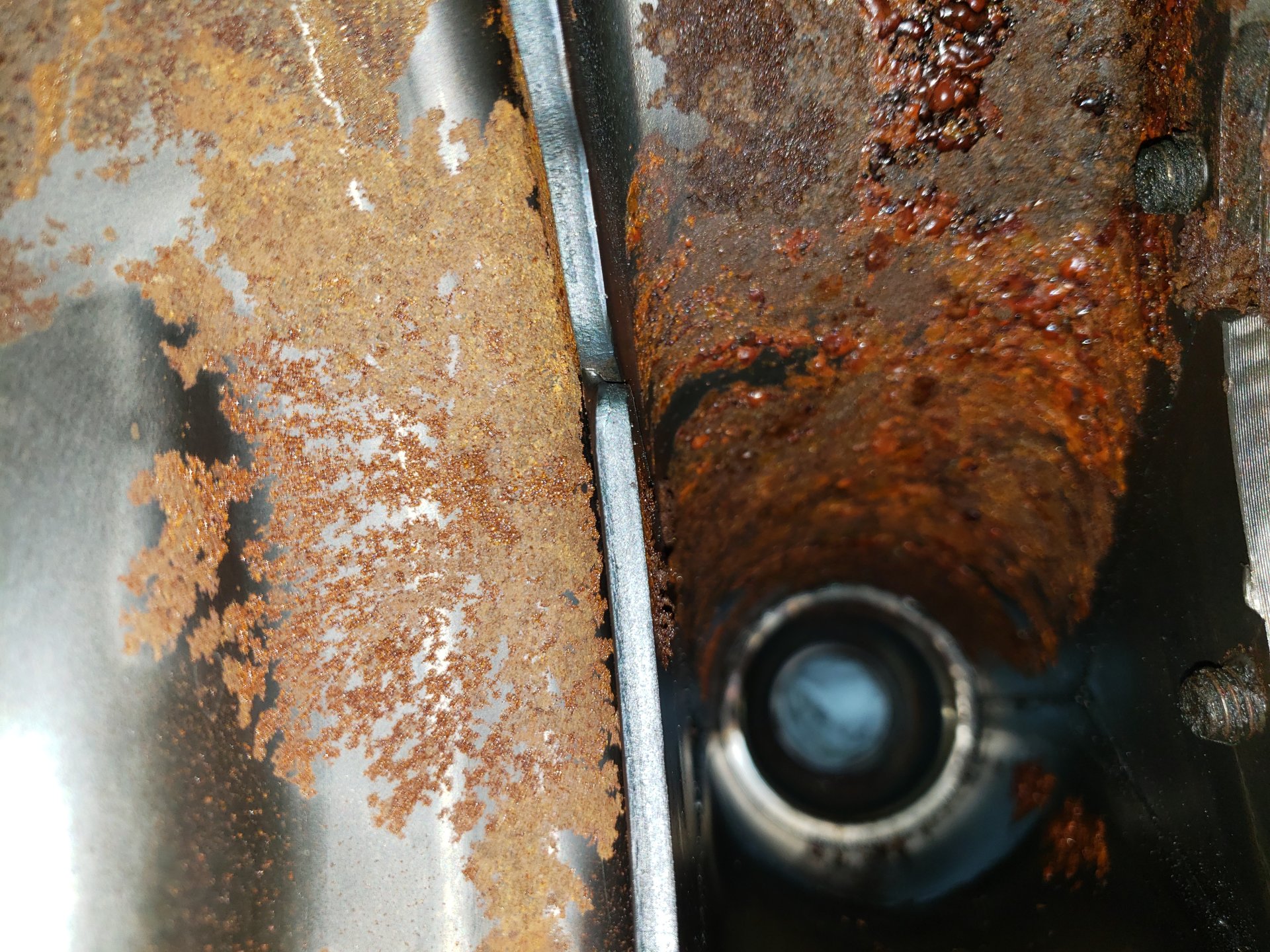 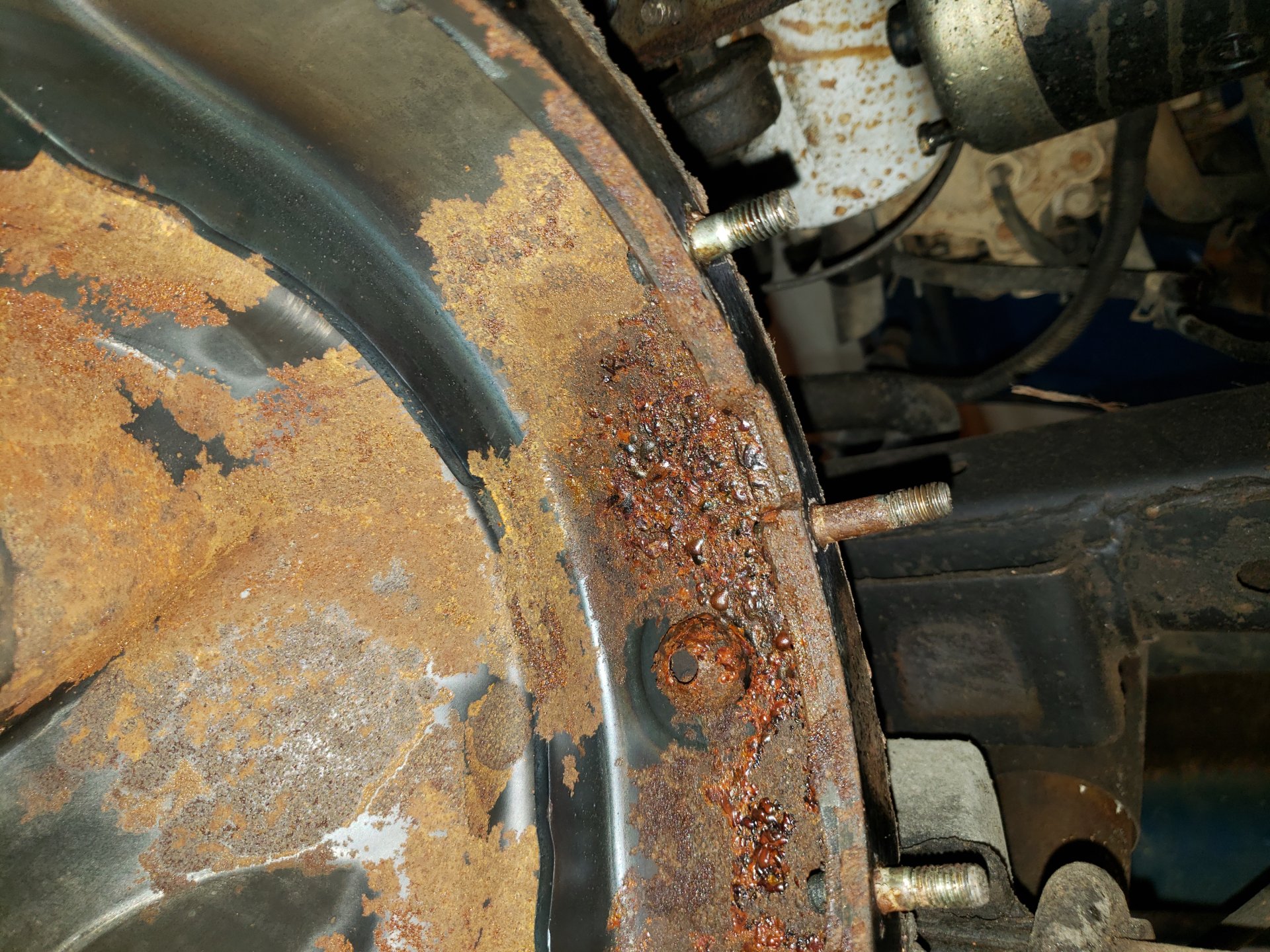 That looks bad; was it sitting out in the weather, water contamination in the gear oil, or just a humid environment??

I know it sat a long time, had to have had at least one side in standing water for a while at least. I cleaned it all up and then noticed it was bent so went with a different housing. It also had some surface rust and some of it was in the breather which needed cleaning out. Would nice nice If there was a way to fling the oil around more.
96 LX450: 2.5" Dobinsons, 1FZ-FE, K294, A343F.
01 Taco:Rear Locked(Stock), TRD, 5VZ-FE, R150F. (Sold)
79 Pickup RN37 4x4 4speed (Disassembled Current project build)
06 Tundra DC 4X4.

If you're worried about the moisture in the air, I'd personally extend your rear diff breather into the rear left quarter panel. Nice and dry back there, and you've now got an extended diff breather. Two birds with one stone.

Driving the truck to get it to full operating temp also boils off any moisture in the axle housings. Doing this also creates some oil vapor that can coat the inner surfaces of the housing.

"Drive it a lot more"

This particular 80 is the one I use for trips over ~100 miles and long trips out of State but it has sat in the past sometimes for weeks or even months at a time when I've traveled (flying) for work far away. All this has reminded me to check another 80 that hasn't had the gear oil changed in at least a few years (but also has never been dunked/driven into deep water) and that one has sat more in the past than the 80 I'm working on now.

Will post up the Blackstone Report once it's completed.

"I'd personally extend your rear diff breather into the rear left quarter panel."