My friend's 1992 LC has a busted AC condenser; it is so hot now in Israel.

Toyota doesn't have this ( USA, Japan and UAE)

All canceled my order.

Looks like the Toyota/Denso original (88460-60060) has been discontinued as I’m sure you know by now. Several sites I checked show stk, but who knows for sure.

Let the future tell the truth, and evaluate each one according to his work and accomplishments. The present is theirs; the future, for which I have really worked, is mine. N. Tesla

canman said:
Looks like the Toyota/Denso original (88460-60060) has been discontinued as I’m sure you know by now. Several sites I checked show stk, but who knows for sure.

I put a UAC parallel flow condenser into my '94. The quality of the mounting brackets is *way* worse than OEM, but it functions great.

If I were doing it over again, I might do the extra work required to adapt a Vintage Air Monster Condenser:

I went to a local ac shop today to inquire about setting up the lines going to the rear. He is charging $195 per line. One high pressure and one low pressure so 2 lines he said. So right around $400 plus refrigerant. He advised to use a plug and play condenser vs one that needs new lines. Based...

Desert Dino said:
My friend's 1992 LC has a busted AC condenser; it is so hot now in Israel.

Toyota doesn't have this ( USA, Japan and UAE)

All canceled my order.

I went thru the same run around looking for a 477-0122 so much I see that number in my sleep, haha. Ended up going with Toyota Genuine as I couldn’t find any other option. Wasn’t super expensive but definitely more cash than the Denso “out of stock with no eta“ unit. Actually now says the Denso 477-0122 is discontinued. 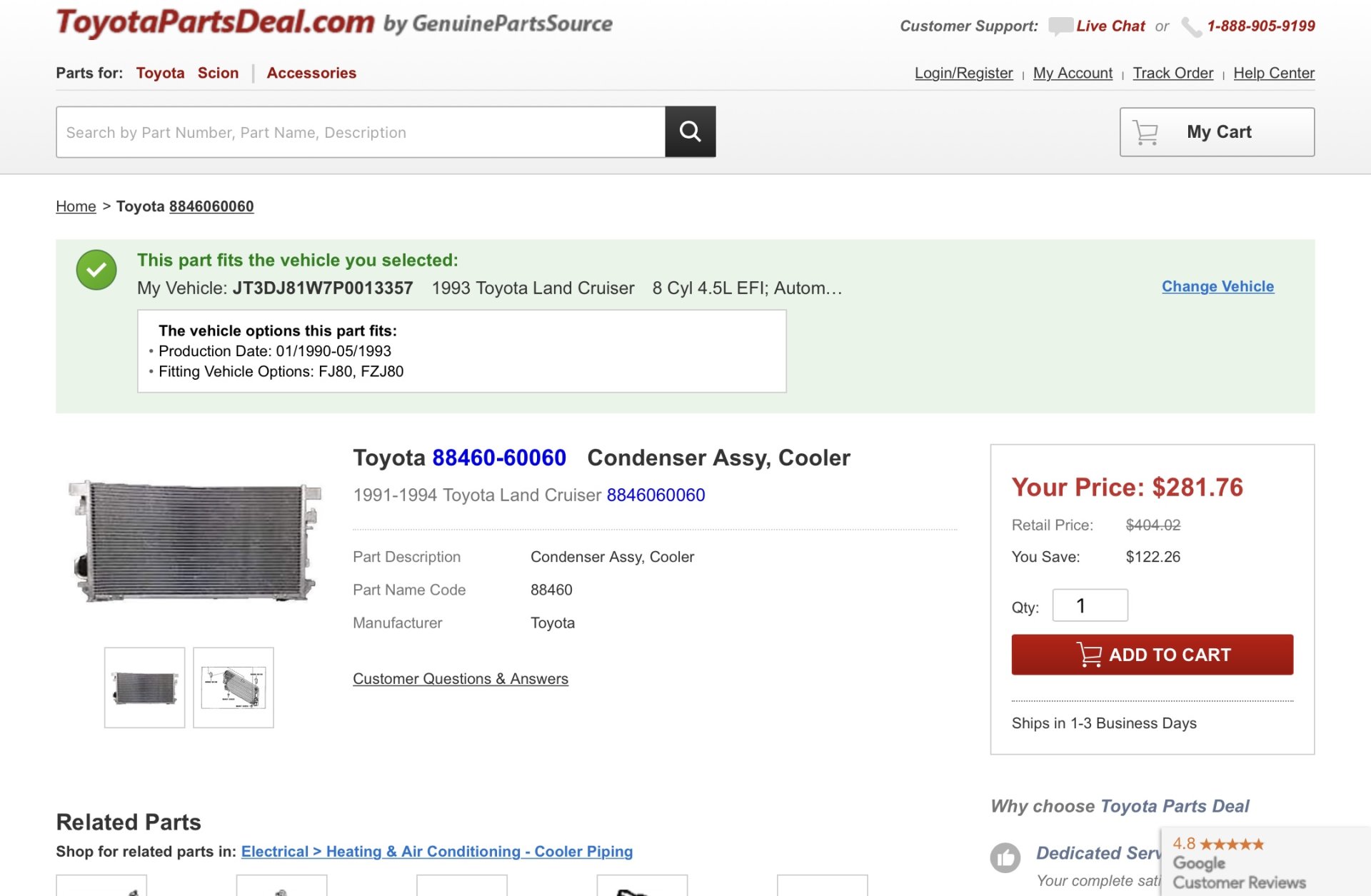 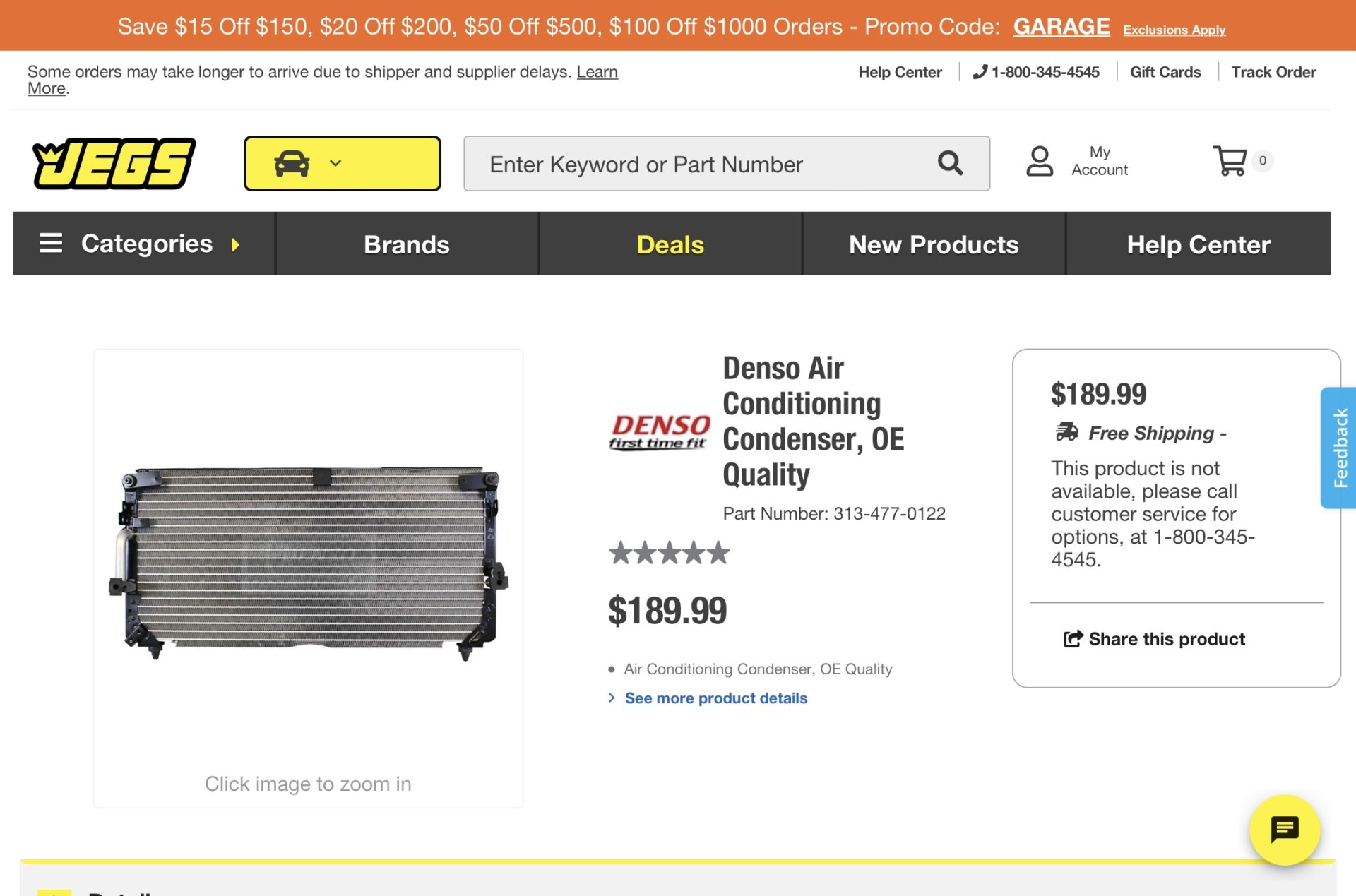 @Shoredreamer I tried to order from toyotapartsdeal from the same link it was discontinued. this is new stock.
Tried to order Denso 477-0122 from Amazon and got a refund.
Ordered and 477-0122 from JEGS on eBay for 110$ and got a refund, now they sell it for 189$
Because of Covid19, there was no supply for a long time.
Denso made new production in China ( the old production was in Taiwan and Japan) it arrived now to USA. and now all suppliers are restocking.
Denso Taiwan and Japan productions had under 477-0554 a few variants 477-0554AA, 4477-0554AB, 477-0554AC, and 477-0554AD the same and parallel to Toyota part numbers I don't know what are the differences.
The China production fits all the years.
I won't be surprised the new Toyota stock is made by Denso in China
Last edited: Sep 10, 2022
Build Thread - my Enola Gay FZJ80 1994:
Build Thread - my Enola Gay FZJ80 1994
You must log in or register to reply here.

Replacing AC condenser, from the back?