This truck represents an long evolution of vehicles based on my stage in life and what I perceive as my needs . I got my first FJ-40 at the ripe age of 18 from a barn in Batavia, NY with 48K miles but rusted right up to the roof. Since that time I've had another 40, two mini's, a 2nd gen 4Runner, and a 60. I honestly thought the 60 was the final "family" vehicle for me but it just had too many concessions for the "modern" world I'm forced to live/work/play in. I had honestly written off newer LC's as mall poser rides with no guts or capabilities. I was actively searching for a D-110. Then I went for a trail run with two well built-up 80's in the winter of 2000 in CO. I immediatley ate some crow and started hawking the web for the "one". I found this one on eBay as one that didn't meet reserve. I emailed the guy and we started the dance. I got if in March of 2001 for $20K with 73K miles on it. This is what it looked like when I got it. The guy, the only owner, had no idea what the locker dial was and had never even put it in low range - another real estate agent.... 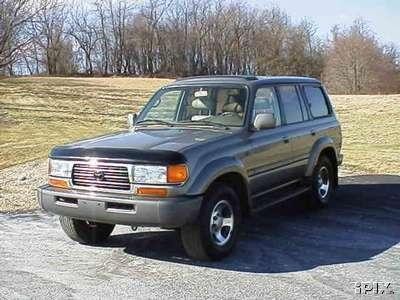 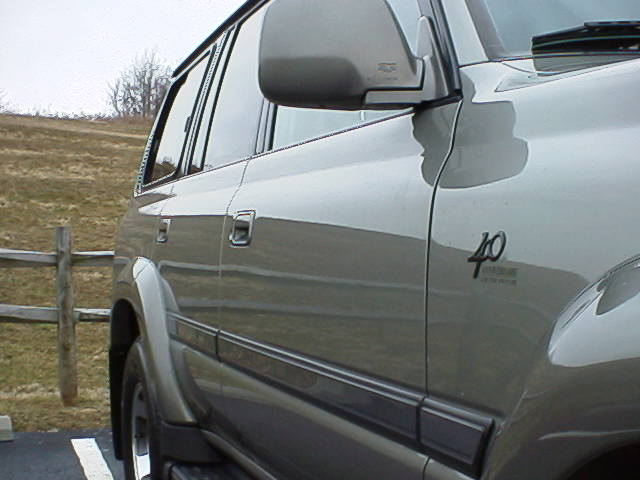 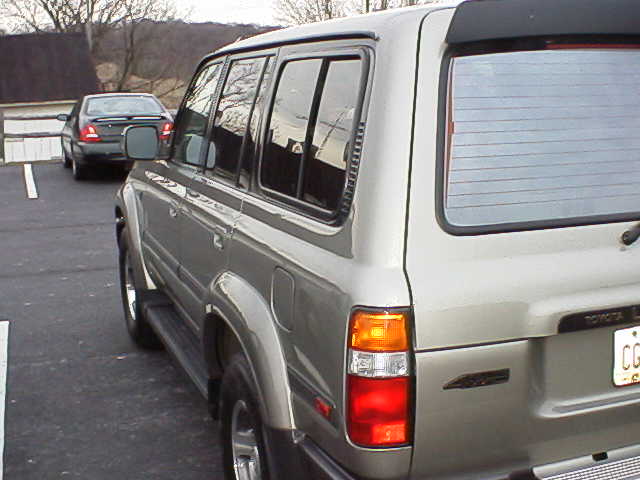 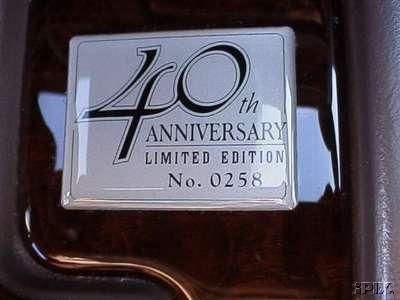 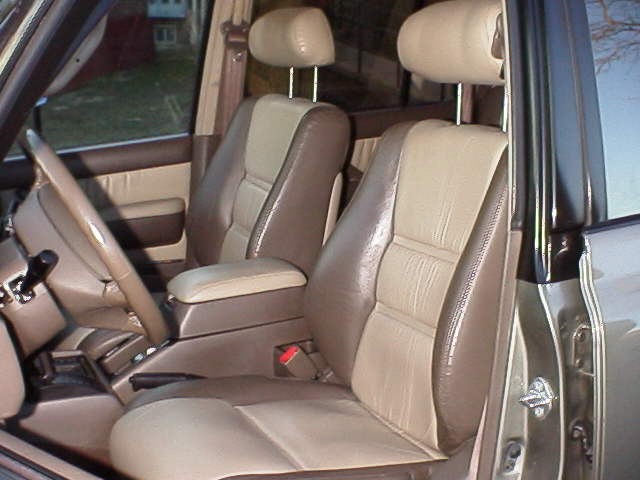 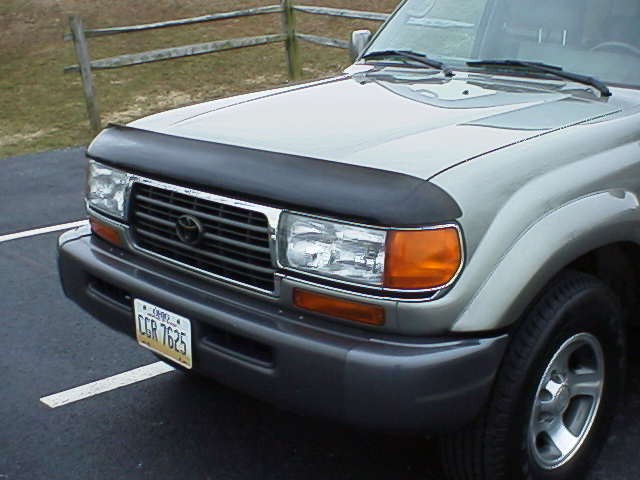 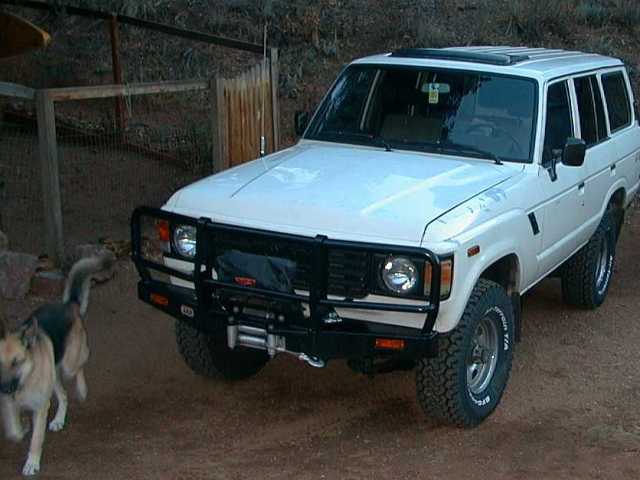 The deal with my wife was, "No mods that take away from the esthetics of the vehicle, no big lift, no big tires, no bull bar and no weird rear bumper that sticks the spare back there or some stupid ladder to nowhere." So I started where there was wiggle.

Since I got the truck in March 2001 with no idea of the condition of the front axle that was first. I did a complete rebuild from the inner axle seals out with all new bearings and new rotors. Relocated the breathers for the diffs, tranny and xfer case all routed to one breather under the hood.

Nov 2001 "Christmas" TRD special on the s/c. Followed George Scolaro's instructions and had it in over a casual weekend. Added the dual batter trays, a new radiator, and a washer bottle relocation kit (George Scolaro's using the Corolla tank) while I had it torn apart. This was with about 90K miles on it.

I also added the complete set of George's LED's. All four doors, overheads and maplights. They have been completely awesome.

I had the fuel injectors pulled with just over 100K miles and sent to RC Engineering. One day turnaround and they made a huge difference.

Other general stuff I did around this time was rebuild the starter, put in a new fluid coupling on the fan, all new belts, new distributor cap, rotor, new plug wires, new fuel filter, new rear rotors and pads and flushed the brake fluid and went to synthetic.

Also started "armoring" the interior. I put Husky floor mats in front, middle and rear. Put a Tough Duck cover in the rear under the Husky mat. Got a set of rear seat Wet Okole covers and a nice set of custom lambswool front seat covers. 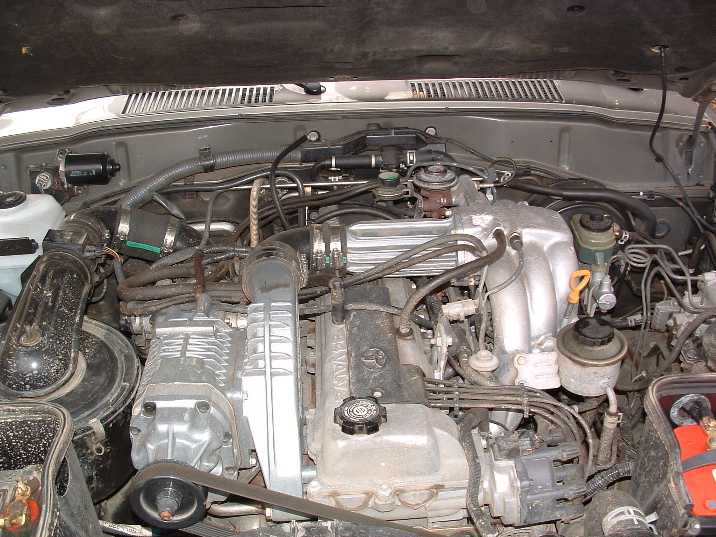 hurryup and post current pics Mike!
It looks fantastic, you're such a tease. hehe
L

Ya Mike tell us more.

I got a set of OME 850/863 springs and N73/N74 shocks and the steering stabilizer next and installed those with the BFG AT's in 285/75R16. This is a great set up and I almost miss how versatile the truck was with this simple, affordable change. The slightly bigger tires were more than offset by the s/c power and the truck was a blast. At some point I realized I needed the CDL around this time and began to get acquainted with Slee's offerings. Oh, what an evil place...

This is about the time that I began to have a serious failing of memory about the agreement I had made with my wife...

I went up to Surf-n-Turf in 2003 and got a set of Hanna sliders installed and then right before the Feb 2004 Death Valley trip managed to "import" and install a full OEM sub-tank system.

Note important spousal law: I am still taller than vehicle. 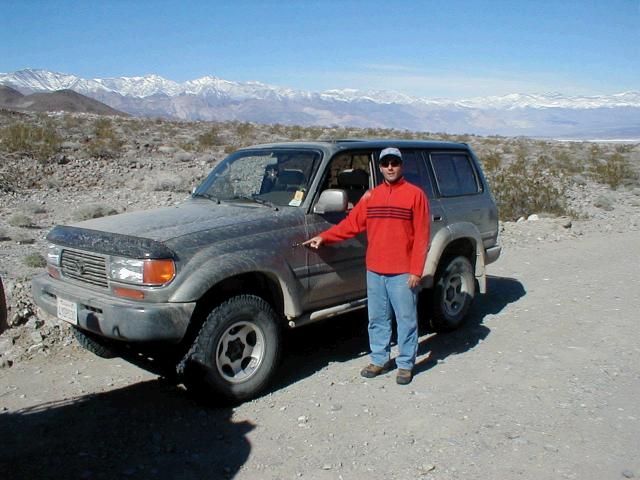 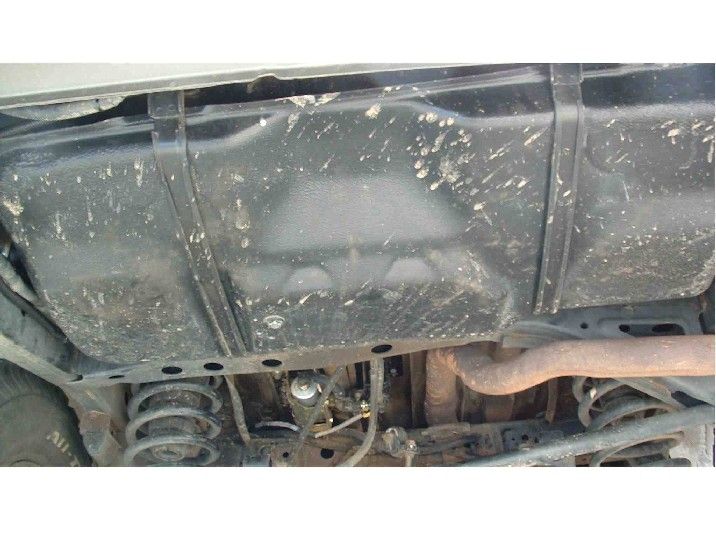 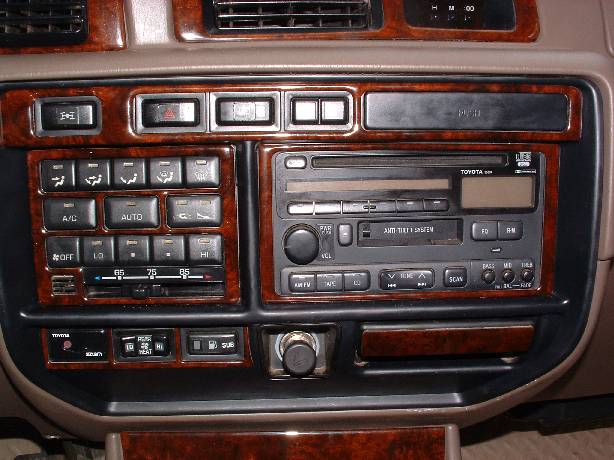 My first, and so far only, "major" issue I've had with the truck is this oil leak that resulted from the upper oil pan arch and crank pulley seal failing. This was so close to the time Dan had his oil galley plug fail I was really bracing for some major headache. I ended up having a dealership do it since it happened on Dec 28th and had it back Jan 2 and have had no issues since. 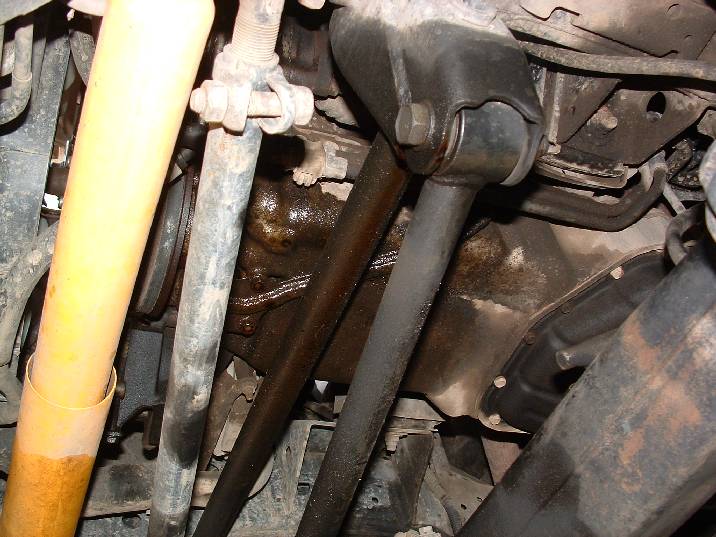 Gorgeous. You really did well on your purchase price for buying it in '01, also!! They were still in the upper 20's for a good deal.

Did that pan arch leak enough to leave drops on the floor, or just wet things in the photo??

How much did the dealer charge you to fix that leak? I have the same problem ...

Thanks, yeah, he had set his reserve at $21K and no one bit. I offered him $20K, which was really more than I could afford but knew if he took it I was getting a good deal. Lucky for me he was in a hurry since the dealership had low-balled him on the trade-in and he had just bought a new Lexus LX470.

The pan arch and crank pulley leaked really badly. That shot was not doing it justice. I lost over a quart in a 40 mile trip. They also replaced the oil pump cover gasket too. I think it was $900 out the door (I can check) but if you can believe it, back in those days they "honored" a Land Cruiser discount. That'll pretty much just generate a glazed look nowadays...

I added a set of David Q.'s 1.5" front spring spacers and 25-mm of OME trim packers in the rear to ensure I could run 35's with minimal issues. I also added a set of David's rear lower control arms that are longer than stock and 0.25" DOM tubing. They are very nice and George has a nice writeup on these (http://george4wd.taskled.com/suspension.html).

And this is as good as time as any to outright thank George for all his help and his wonderful website that turned me on to so many cool mods for these trucks. Cheers, George, wherever you may be.

For wheels/tires, I took advantage of the feeble SoCal-bling mindset and got a set of stock 17" Sequoia/Tundra alloys and some BFG AT 315/70R17 take-offs from the Hummer H2's. This is still my general pupose set. I got some 1.5" aluminum spacers to place them where they needed to be.

For the trail I got a set of Michelin XZL 9.0R16 tires on the stock alloys. These are true 36.5" diam. tires and were maxing out what I had in terms of suspension.

Oh yeah, I put a snorkle on too since I had a sneaking suspicion that I needed more air... 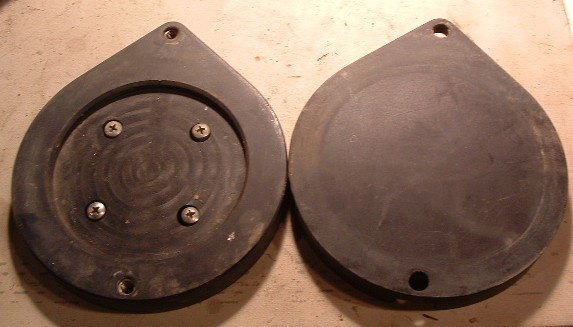 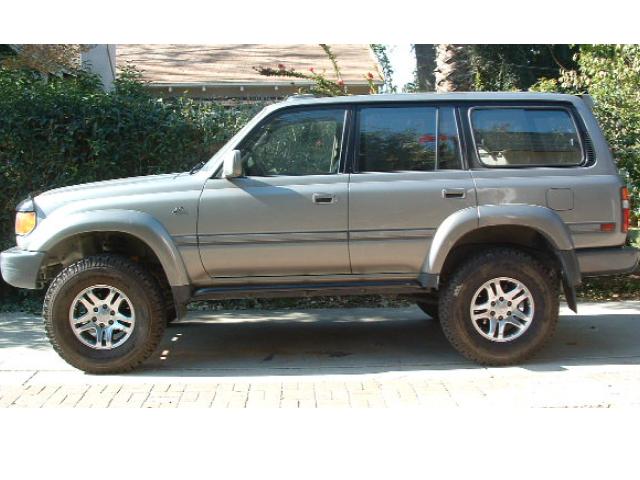 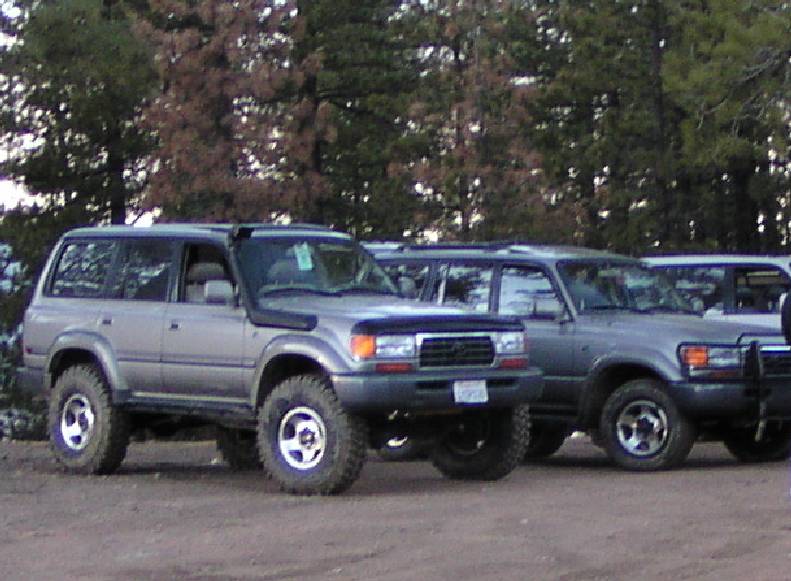 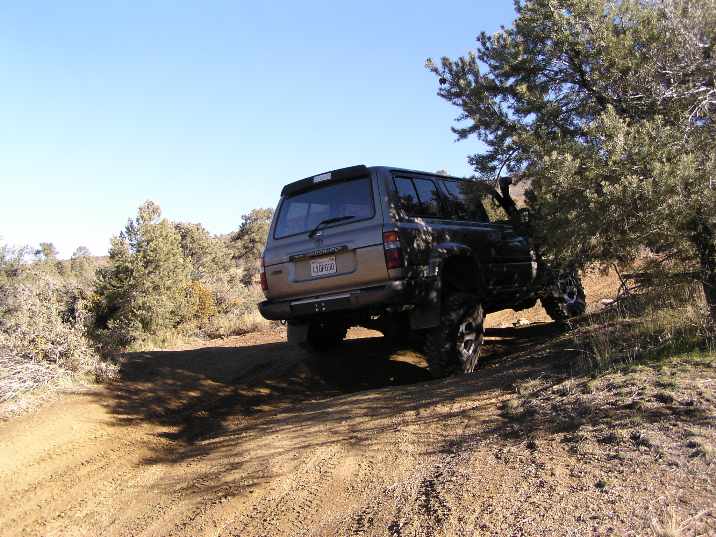 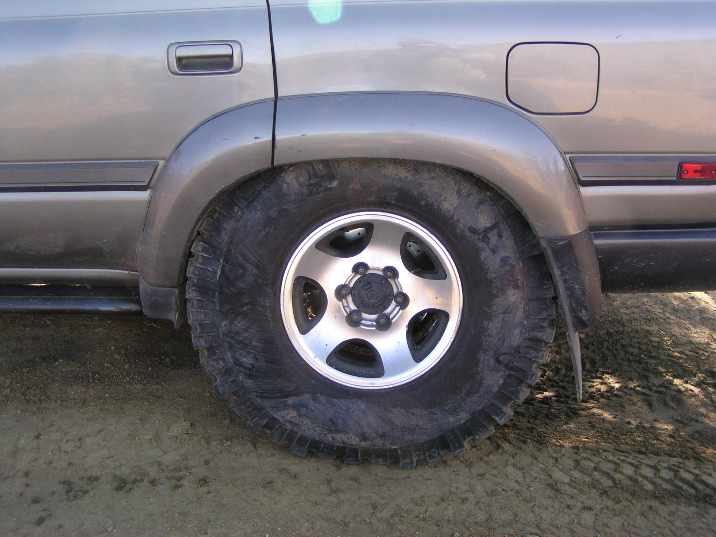 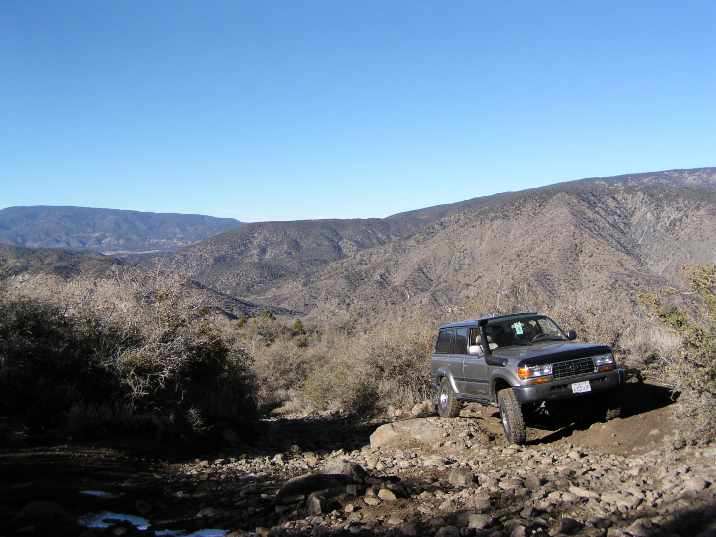 and then I get this email... 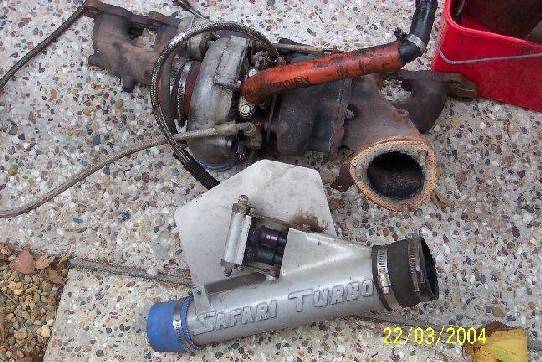 So out came the s/c and it now resides happily in Big_Moose's ride.

I knew this was going to be a huge pain the butt to do in my driveway between Jan and the Death Valley trip (late Feb/early Mar) but I had no idea. 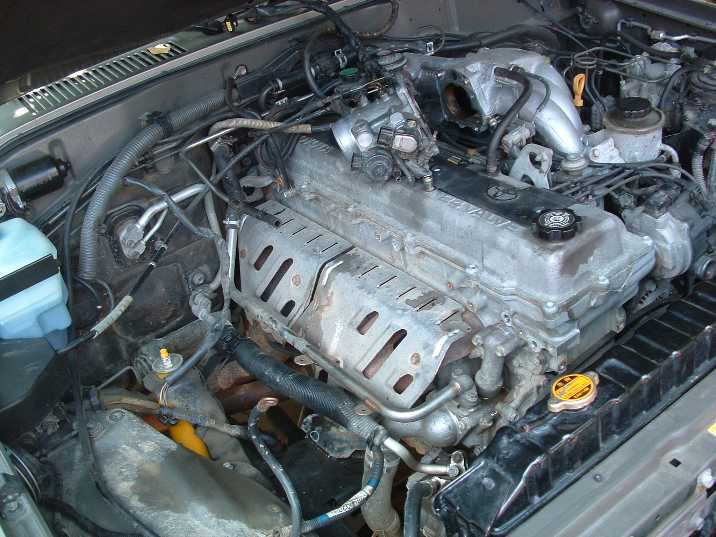 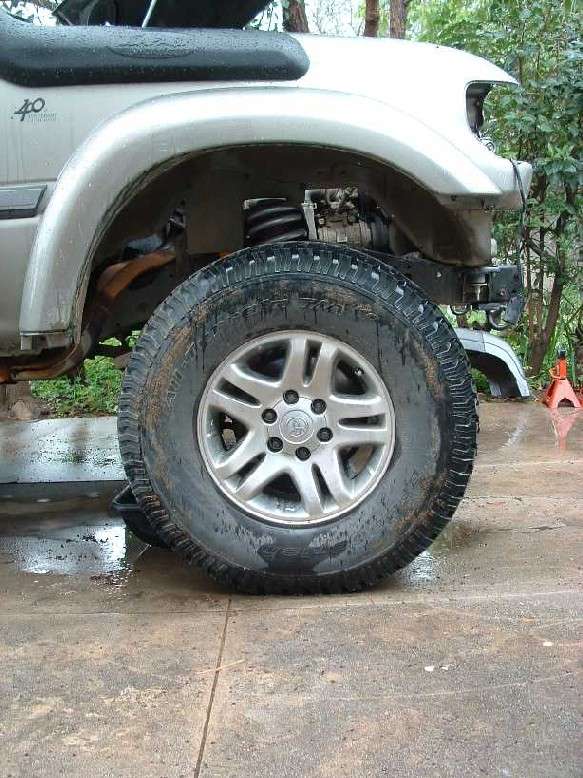 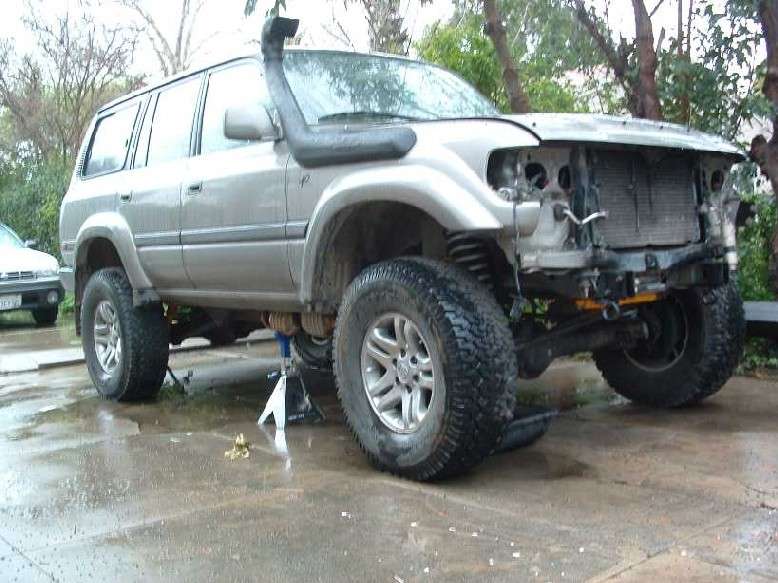 Then cobbling the turbo and plumbing for the intercooler in there. I did not get the replacement transmission oil cooler so I sourced a Mazda RX-7 oil cooler that fit neatly in between the frame rails just below the intercooler. 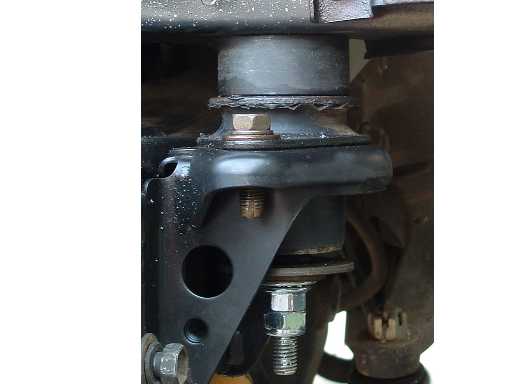 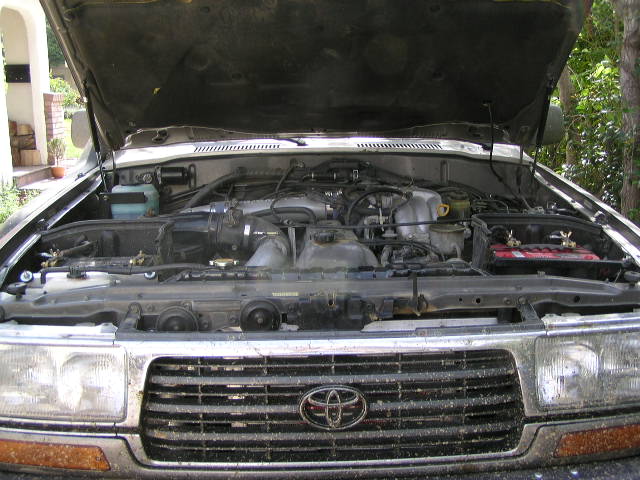 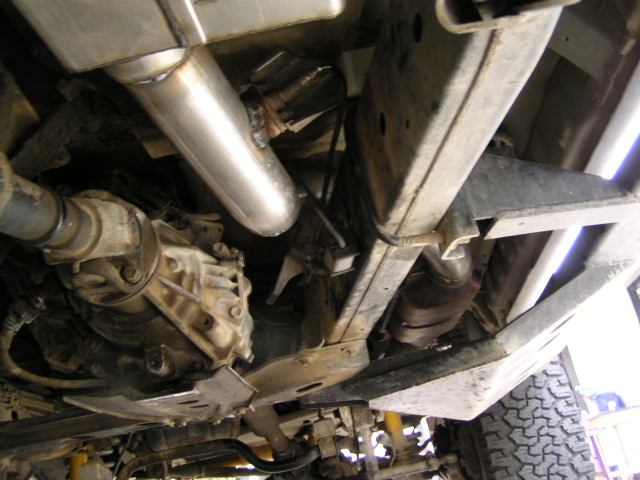 And while I was at it

I knew that my stock front control arms with the OME caster correction bushings were no match Christo's big springs.

First I did Bjowett's IFS camber mod idea and then eventually added OME caster correction bushings to the rear to effectively lengthen the arm.

This did not ride that badly with the caster dialed to the lowest setting. 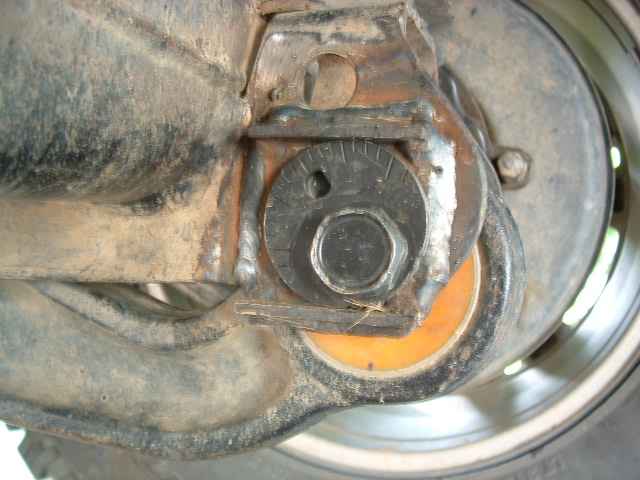 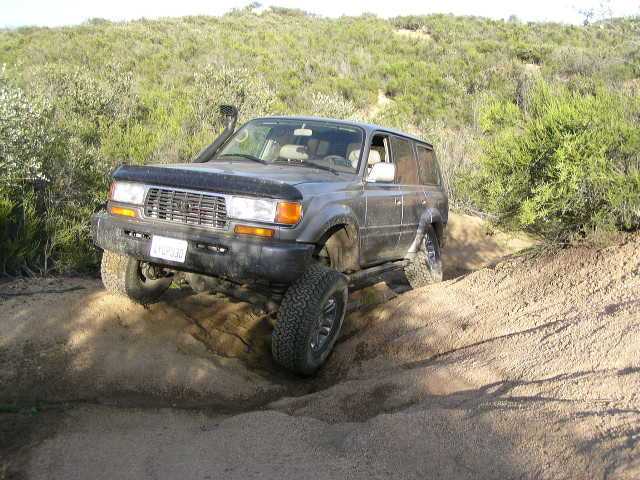 What additional modification were necessary with the 1" body lift?

Phil, I dropped the radiator down 1" in its existing brackets - it just allows you that much - and drilled two new holes for the top bolts in the apron. That was it. For the two rear-most mounts I had to flip the bolts. I actually debated whether that could actually have any serious structural consequences but thought better of it

I have all the specs for the stuff if you want, just pm me. Roger was really nice to deal with and so much more affordable than getting it from AUS.
You must log in or register to reply here.