I figured i'd make a thread for anyone else who considered the idea of routing their roof rack wiring through the rear window cabin pressure venting. I searched and searched and looked through tons of pictures and threads and didnt find anyone who had done this and documented it. I used to have my wiring run through the rear hatch gap with some insulated braided wire but it looked like complete trash. Since ive only seen people run wiring through the snorkel or drilling a hole in the roof, im sure other people considered the rear vents a viable choice and might get some inspiriation. I just finished running the wires but have yet to complete the circuits due to a bad storm so please excuse the grainy rain photo.

Any recommendations or criticism is welcomed, but before hand know i'm aware the chance of catching the wires on a branch and i am looking at options for some hemisphere plastic conduit shields or something of the sort which can be adhered to the portion between the gutter and the louvre plastic.


Firstly i removed the interior pillar cover and the interior plastic panel to get to the 8mm bolt and the plastic clips holding on the louvre. you'll need a deep well 8mm for this. Notice the s***ty existing wiring i had. 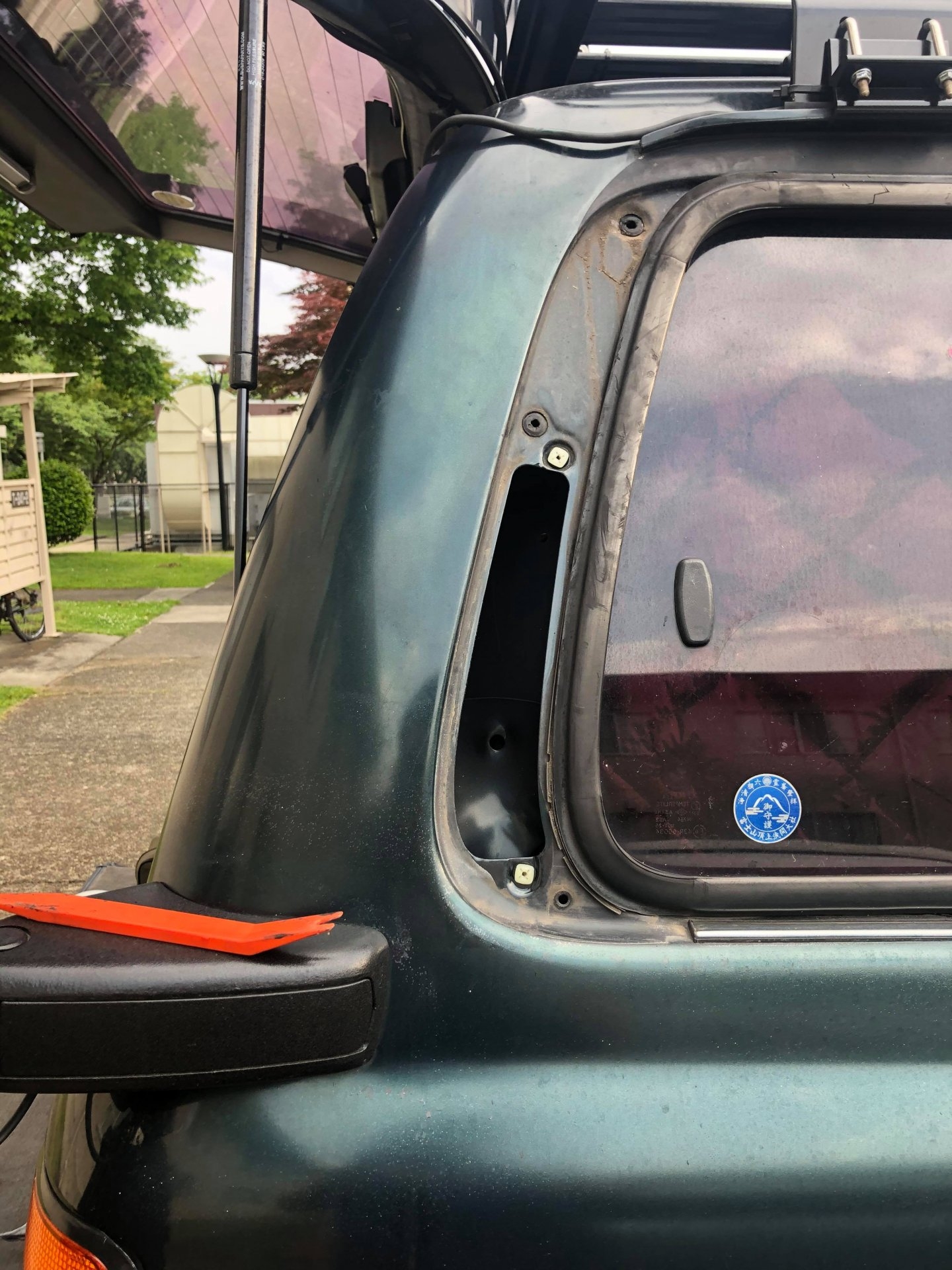 You have to remove the actual cabin pressure vent by 2 screws and it squeezes out. Its malleable plastic so it takes some persuading but itll be fine. 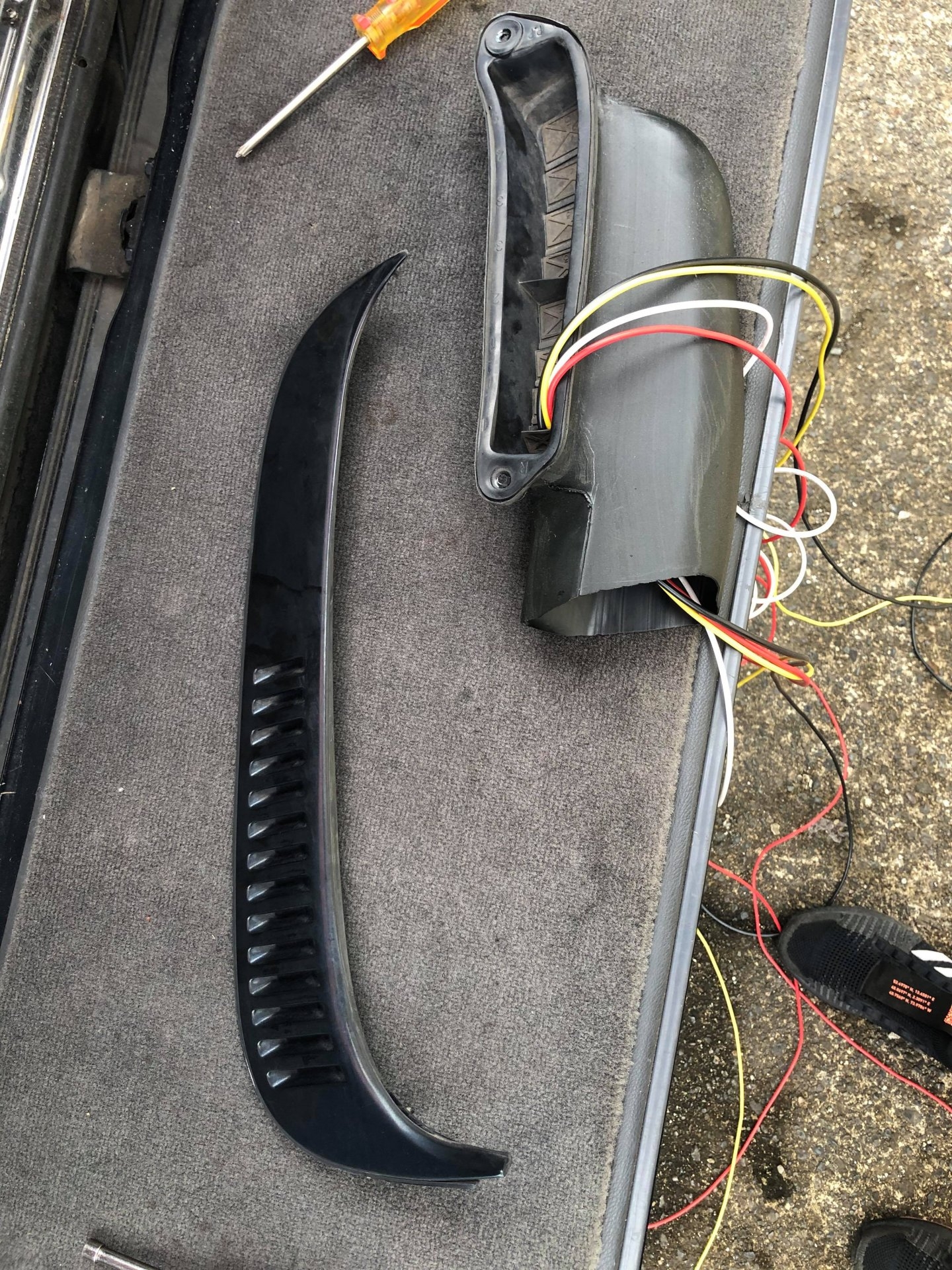 I chose to route the wires at the uppermost flap, which i think would be best in case any water did travel in it would drip down past the other vents and not roll in. either way, if it did, the vent has no water escape at the bottom, only the top. It also may help with being snagged outside the vehicle because the wires are binding a little when snaked in, who knows... 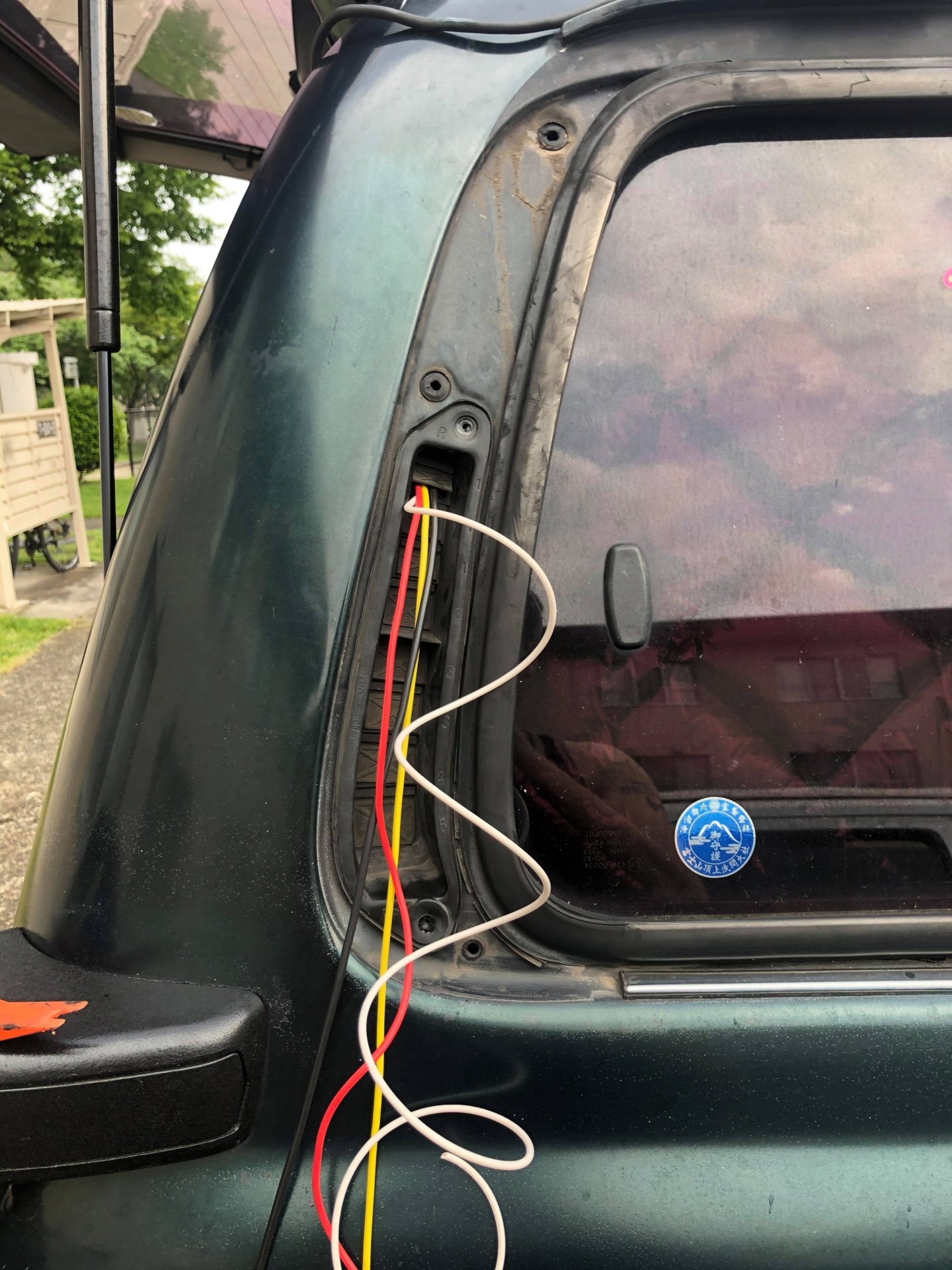 with the wires fed in theyll need to travel up inside the cabin as the inside of the vent faces up, then run the wires downward to where ever you want to ground or run power from. once they're fed in above some of the structure bracing theyre super easy to find on the inside. For my plans, the yellow and white wire are going to be extras in case i decide to run lights on the front of my basket. I have a high mount reverse light in the rear which ill re tap into the existing reverse lights. Theyre all LED so im not worried about drawing too much amps. (note: once you get some extra reverse lights you'll never want to back up in the dark without them. probably my favorite mod) 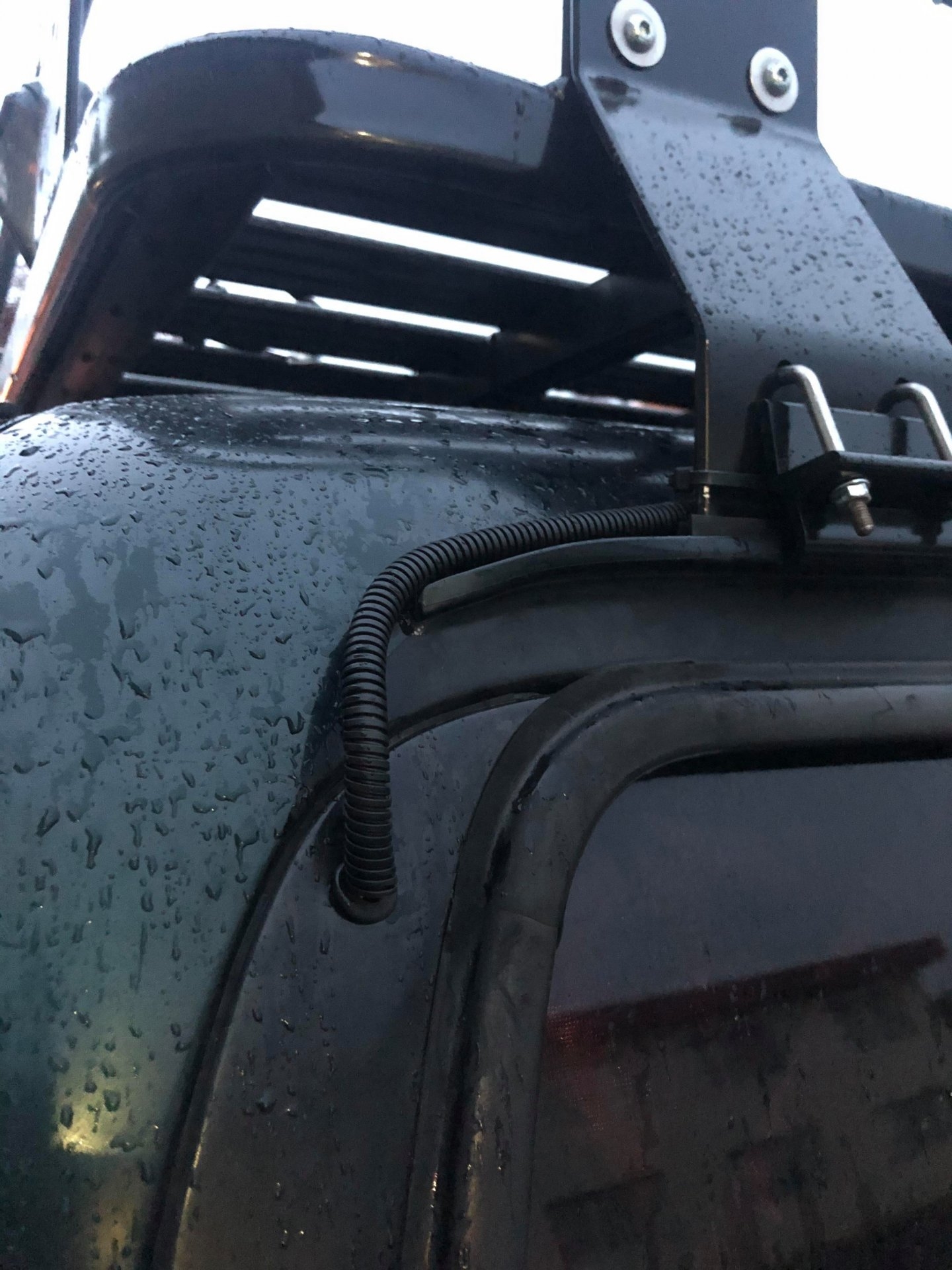 I drilled a couple holes in the louvre and cleaned it up with a dremel with a die grinder tip to try and get it to seal as best as possible. at this point i was cut short due to weather so the gromet sits just shy of perfect with the upward tension on the wire, ill use a little bit of FIPG or silicon i have lying around to get a better seal and touch up the end with some electrical tape 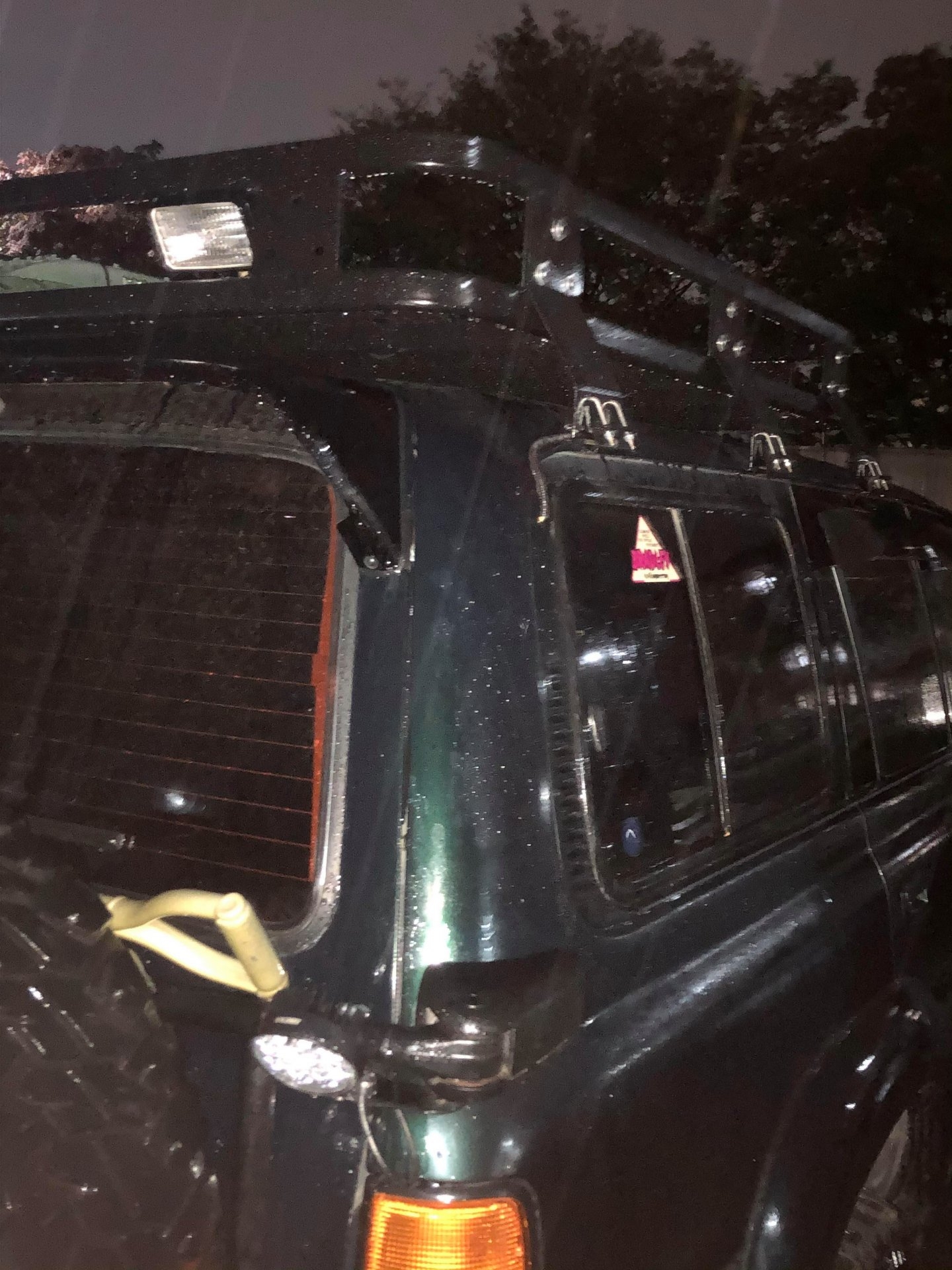 This is how its sitting now as a bad storm halted my progress. If anyone knows any good choices of conduit covers or anything to get the wire more pressed against the body let me know. Id really appreciate some suggestions. In Japan we have a really s***ty selection of hardware and electrical supplies . Ideally i wanted a 90° CAN plug but the more i looked the more i realized it would sit 1/2" off the body and that would definitely get snagged easy.


I hope this gives people some ideas to solve the issue of clean wiring to the roof. Personally i thought ruining a 60$ louvre was a better choice than compromising the snorkels air tightness by running wires inside the airbox, and the thought of ugly wires running along the outside of the snorkel was just as bad as wires jammed in the hatch IMHO. Maybe someone can do it better or pass on suggestions. Thank you
Last edited: May 1, 2021

Looks good and clean, I like it. The only problem I could foresee would be catching the wires on a tree branch. But this honestly is an issue with any method of roof rack wire routing. I would secure the wiring to the gutter clamp with a heavy duty large zip tie and call it a day.
You must log in or register to reply here.

How to make rear windows work with tube doors?

Hood vents vs snorkel for a supercharged 80
2 3