First off, I'd like to say I couldn't have done this without Rudi's help. Ever patient and knowledgeable, Rudi was tireless in offering countless suggestions, tips, tricks and of course wiring diagrammes. Thanks Rudi!

Now, onto the business. I'd already bought new headlight terminals off ebay, cheap good and ceramic...can't get better than that! And they came with 14 GA wire already attached...more than what's needed on a typical 24v headlight setup. 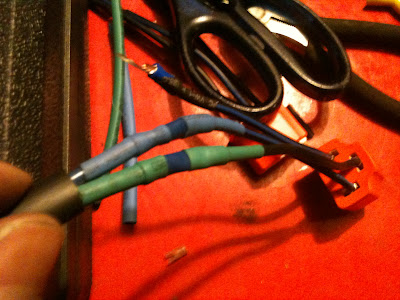 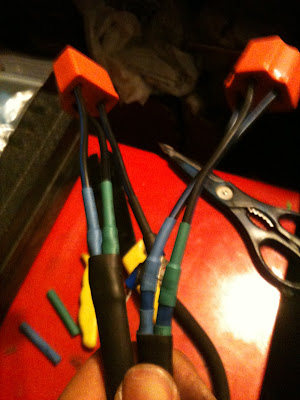 I used crimped connectors all around and colour-coded heatshrink...Green for low beams and blue for high beams. The ground (or common) was a ring terminal that would be screwed into the Cruiser body near the headlight. 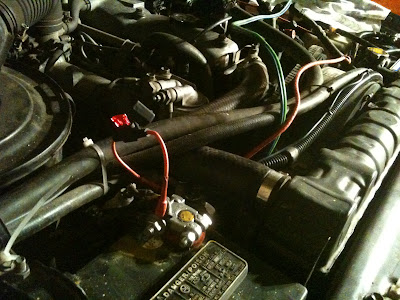 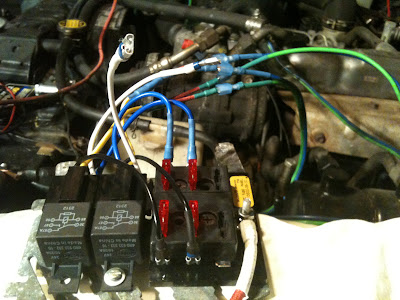 A 10A inline fuse protected the whole fusebox/relay box. Well actually, truth be told, I had intended to fit everything into an old Mercedes relay box that I had. Well it all fit ONTO the plate, but I couldn't close it up after. Ah well, another project for another day.

Now the meat and potatoes...Rudi's diagramme: 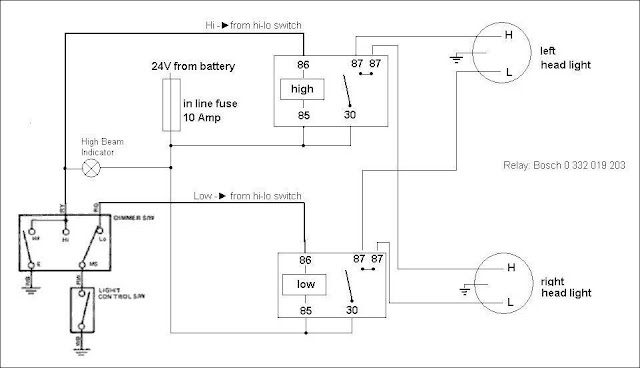 I then removed the huge dimmer relay and got the measurements below. 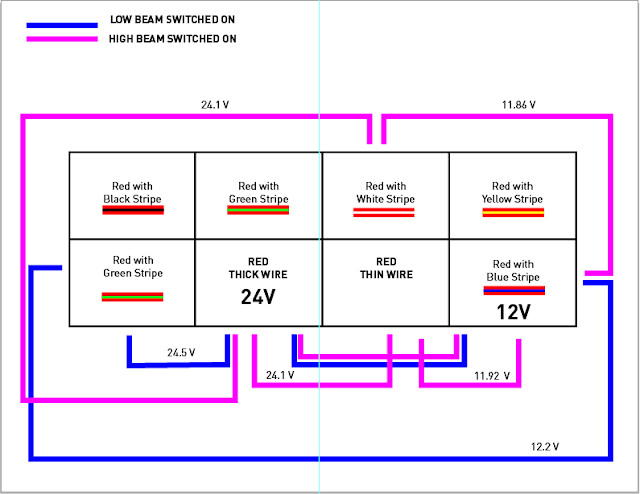 It seemed fairly straightforward. Implementation though was another thing. Everything from the headlights to the new fusebox was pretty straightforward. Basically, I had low beam relay and a high beam relay.The trick was in getting the right signal from the switches. I thought I could just throw away the huge dimmer relay that's located under the kick panel and hook it up this way: 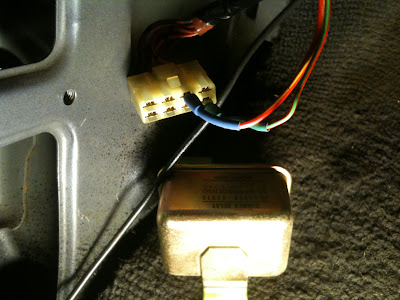 Only problem was, if you switched the lights on and off quickly, they would stop working!

On Rudi's suggestion I started rooting around a little more and found a whole bunch of relays that were STILL clicking each time I switched the lights on and off. I removed these TWO. 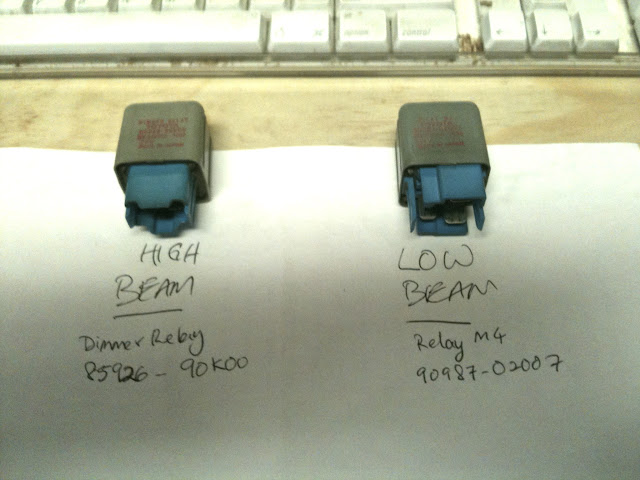 After that, I connected the Low Beam trigger that went to terminal 86 of the low beam relay to one of the slots that showed 24v grounded when the low beams were switched on and my problems were solved!

The high beams were fine in the lower dimmer relay spot and even the high beam indicated in the dashboard would light up. The only thing I couldn't figure out was how to switch off the low beams when the high beams came on. So now, I have the rather happy problem of having both highs and lows come on when the high beams are switched on. Rudi had a solution of course, to use the existing wiring, but only as a trigger for the relays. But that would mean keeping the centre tap.

The upside is also no more extra stuff dangling from the batteries. I haven't yet removed the fusible links on left and right batteries yet, but I'll be doing it soon. I'll probably leave them hanging like I did the existing headlight terminals and seal them good. I noticed slight sparking when I was removing them from the battery terminals early on in the experimental stage. I suspect there's always a slight draw with the centre tap. Why else would they be sparking with nothing switched on?

Anyway, all that is moot for me now. No more centre tap makes me happy!!

And with 24v headlamps, I can run higher wattages at lower amp draws! IF you have a stock Cndn HJ60, I highly recommend this mod!

Compliments! Good write up and a very nice and clean install job.
We had to solve a bunch of wiring problems because it seems that nobody has a wiring diagram for a 24V Canadian Market HJ60. All FSM diagrams available are for 12V Cruisers.

For those of you who are interested in the problems we had to deal with...... send me a PM.

Thanks Rudi. All the trouble is worth it. I have a much simplified 24v headlight system (imagine, got rid of 3 relays) and hopefully, my batteries will last longer without the centre tap.

Cool info Mark. I have to ask, how long a life did you get from the batterys? i've got 4 years out of some excides but rotate em every oil change so twice a year maybe.

The Cruiser is still pretty new to me...so I can't really tell you. However, I believe the little mod I've done with extend the life of my batteries significantly. I guess only time will tell. FWIW, the batteries I have in my Cruiser now are pretty old as they came off a Dodge truck that couldn't start with those batteries. They were Group 27s which my buddy gave to me cos they were the right size.
O

My bad if this has already been asked in a different thread, but what system did the hj61 rhd have? 24v headlights? If so, could a person not acquire the relays etc. From a non Canadian truck and swap the parts in?

Just revisiting this thread. Like @olandevo asks, could someone not grab the wiring from an HJ61 and swap it to replace the centre tap wiring on the CDN spec HJ60?

Right now, I don't have a problem with the center tap, but I might be interested in swapping it out one day if it does become problematic.
O

georgebj60 said:
Just revisiting this thread. Like @olandevo asks, could someone not grab the wiring from an HJ61 and swap it to replace the centre tap wiring on the CDN spec HJ60?

Right now, I don't have a problem with the center tap, but I might be interested in swapping it out one day if it does become problematic.
Click to expand...


Am at a point now where I have no power to my headlights, I'd rather not do a f#&* ton of rewiring and just have working headlights. I've swapped out all the relays with working ones and am now about to start cutting open wiring harnesses looking for a busted wire. I literally have zero volts at either headlight. Fuses are solid and I've swapped the steering column on/off to no avail. Not sure what happened. Been off the road for a year getting body work done, sparked her back up one day and zero headlights