I'm trying to remove the rear axle races on my 65 FJ-40. I've tried beating them off with a cold chisel, but it doesn't budge. Any other ideas?

Inner or outer? The inner race is machined as part of the axle, so there is nothing to remove. The outer race is just pressed in to the housing.

Score it almost through with a die grinder, then break it.

Oh yeah, if that's the original Koyo bearing post up the number, just wondering if the FJ25 is the same.
B

This guy is definately pressed on, so it must be the outer. The part number is R1398 (hope that helps). I'll try the grinder trick. Thanks!

Do you just happen to have the 3rd member out for other maintenance? If so you can run a long pipe all the way through from the other side and pop it out.

That's the number I've got (last digit could be B) looks like I can use an available bearing.

The outer bearing (with rollers) should stay in the housing, you can take it out with a slide hammer, or if you've pulled the differential drive it out from the opposite side with a long pipe.

The inner race stays on the axle shaft, almost like a sleeve pressed onto the shaft. I believe the manual says you should heat it to install, could try that for removal rather than cutting it.

BernieB said:
I'm trying to remove the rear axle races on my 65 FJ-40. I've tried beating them off with a cold chisel, but it doesn't budge. Any other ideas?
Click to expand...

You are talking about the rear axle bearing race that was pressed on all semi-float Land Cruiser rear axle shafts until 08/73 correct? The early trucks had a two-piece race and roller assembly. The later rear axles had a one piece bearing and the rollers ride directly on the axle shaft.

FYI- Later axles can be used in early bearings.

As has been suggested, try and cut almost through it with a dremel wheel, and strike the split that you have created with the chisle. It should pop apart, and then fall off.

I have done it this way, and also used a torch. 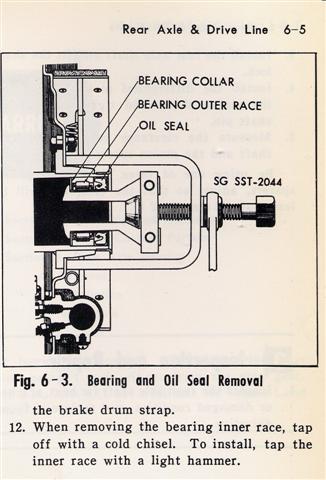 Since I know nothing, I figure, go to the source. Mr. Toyoda knows best. Like here, where I see how much gear oil to put into the differential. 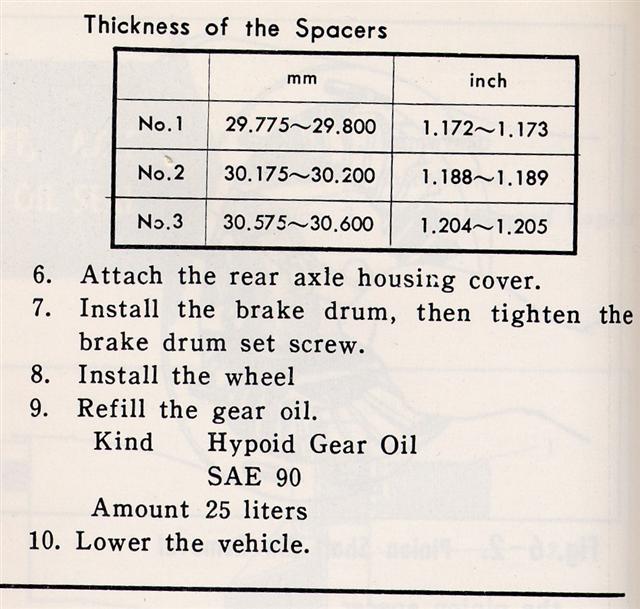 The EZ way to get the outer race out (if you don't have the special puller tool) is to just weld stringer beads on the inside of the race with any welding rod. When it cools, the metal shrinks and the race will just fall out.

Welding also works for removing the inner race, but the shrinkage works against you. For the inner race you just weld a spot on one place of the race until it is red hot and then quench the metal rapidly in water. Then you just smack the weld with a hammer and the race will shatter like glass.


A slide hammer doesn't get much cheaper than this.

IDave said:
Since I know nothing, I figure, go to the source. Mr. Toyoda knows best. Like here, where I see how much gear oil to put into the differential.
Click to expand...

Thanks for all the info. I'm not worried about the inner race. I'm going to put all new bearings/stuff on the chunk so I'm going to pull it. I think I'll try grinding a groove in the race and chiseling it off. The Haynes manual says to knock it off with a cold chisel, then tap the new one on with a drift. Do I need to heat it up or can I use the drift?
You must log in or register to reply here.
Share:
Facebook Twitter Reddit Pinterest Tumblr WhatsApp Email Link