Found this interesting article today on axial turbines and how they compare to tradition radial designs;

So just how do you go about improving a turbocharger’s transient response while maintaining very high reliability and low cost? It’s evident that more than just a material change is required. We already know that lighter is better to improve transient response. In addition to mass, rotational inertia is affected by geometry; the closer the mass to the axis of rotation, the lower the inertia and the faster things will spin up.

A few other concepts related to improving a turbo’s transient response include compressor to turbine wheel matching, turbine efficiency, and Blade Speed Ratio (U/Co). U is the blade tip speed and Co (called C naught) is basically the speed of the gas flow into the turbine wheel. Co is also known as the spouting velocity and is defined as that velocity which has a kinetic energy equal to the isentropic enthalpy drop from turbine inlet stagnation pressure to the final exhaust pressure; so for our purposes, it is basically the velocity of the gas into the turbine wheel. For the commonly used radial flow turbine wheel in turbochargers, a ratio of approximately 0.7 is ideal for maximum efficiency. So we know mass, inertia, wheel matching, turbine efficiency, and Blade Speed Ratio all factor into transient response. Garrett went back to basics, reanalyzed the problem, and developed a completely new concept for a turbocharger. The concept pairs an axial flow turbine wheel to a dual-sided compressor wheel to create a turbocharger called DualBoost™ for Gasoline. 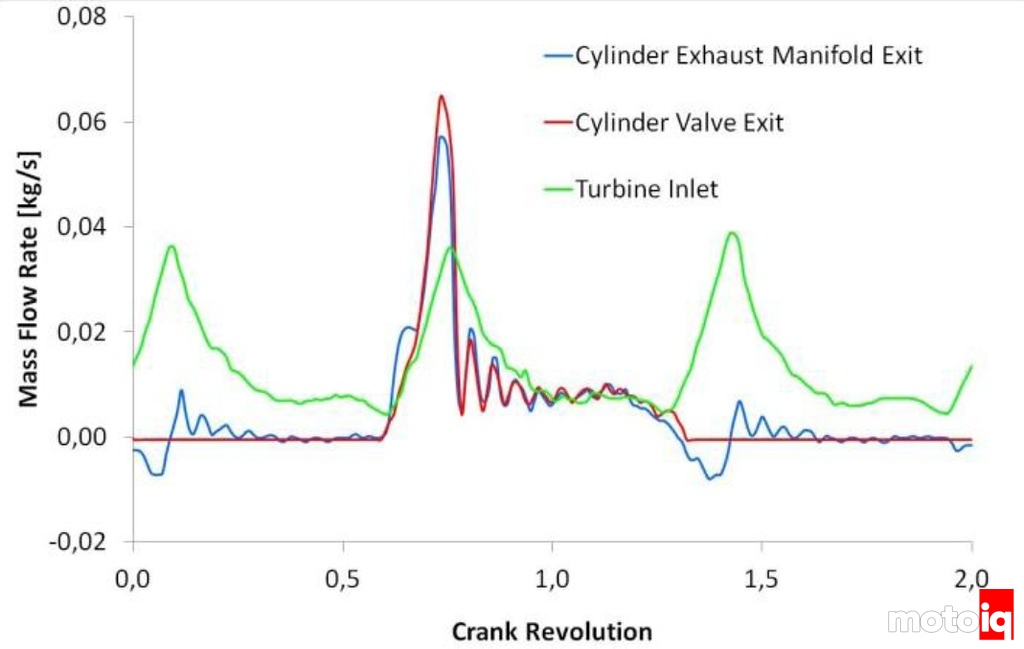 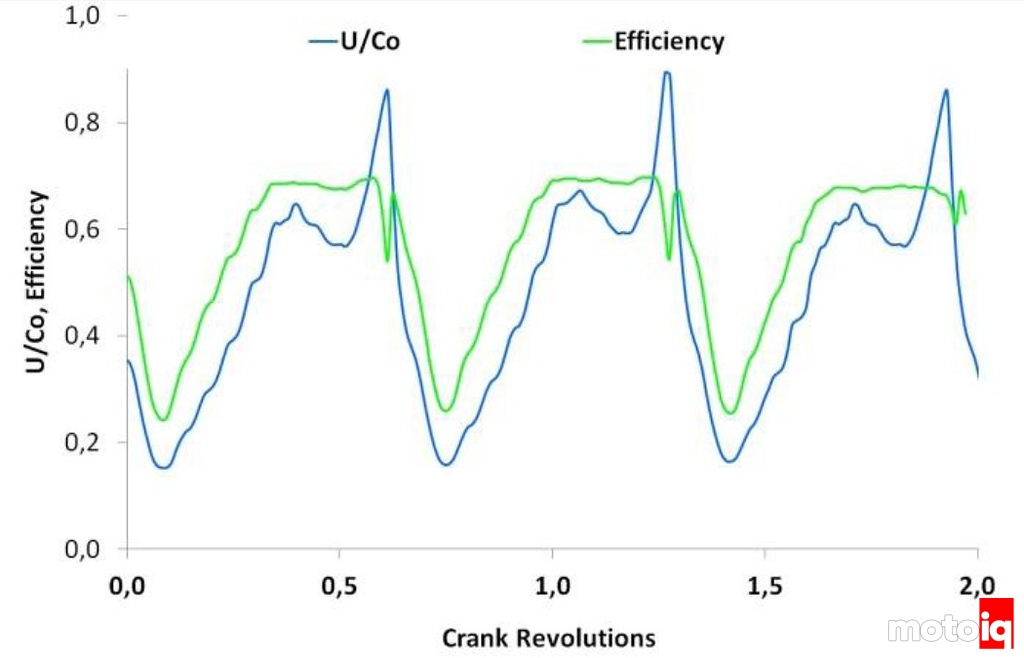 Clearly turbine efficiency is a function of U/Co. Radial turbine wheels typically have a maximum efficiency at a U/Co of 0.7. 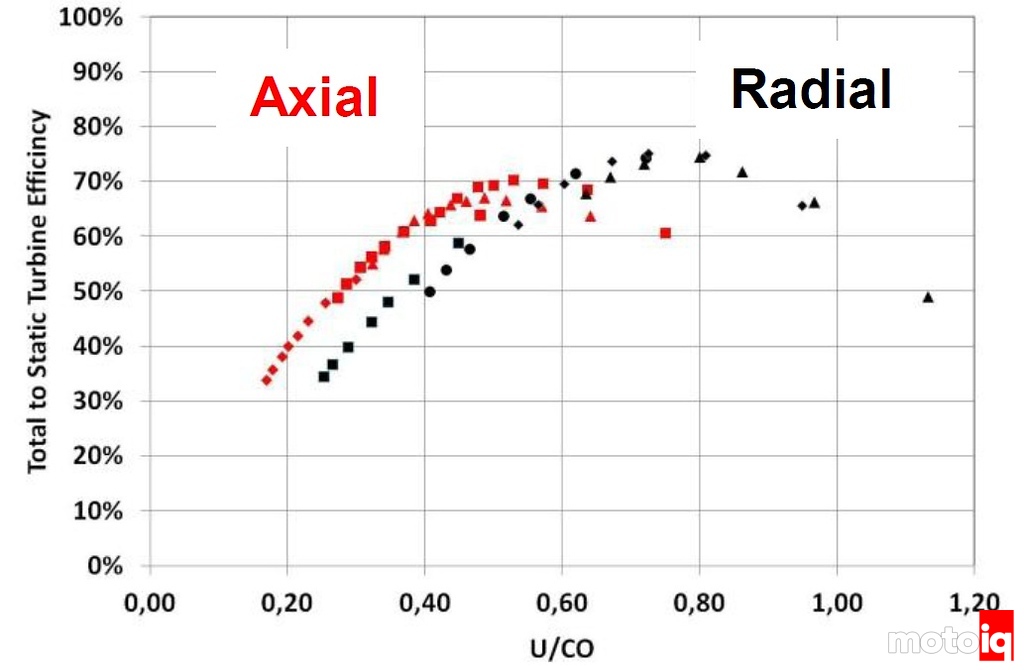 This graph shows the axial turbine’s superior efficiency versus a radial turbine at lower U/Co values. As previously mentioned, a U/Co value as low as 0.2 occurs at the beginning of an exhaust pulse. At U/Co=0.3, the turbine axial turbine wheel efficiency over a radial is about 55% versus 41%. That’s about a 34% advantage in converting exhaust energy into mechanical work to spin up the turbo faster. The axial wheel has better turbine efficiency everywhere below U/Co=0.6. This covers most of the range of U/Co the turbine wheel sees during an exhaust pulse. Therefore, the axial wheel will convert more of the energy from the exhaust flow into mechanical work than a radial wheel would. 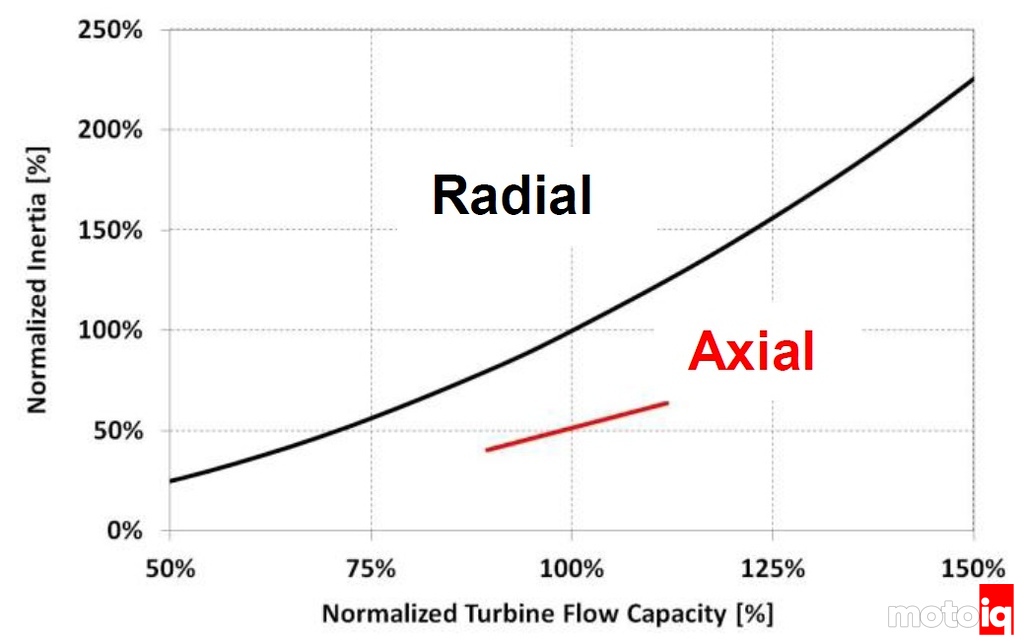 The other major advantage of the axial turbine wheel over a radial wheel comes from geometry. A smaller diameter axial wheel can flow as much as a larger radial flow wheel. Being smaller diameter, the mass is closer to the centerline greatly reducing inertia. Remember that rotational inertia increases to the square of the distance that the mass is from the centerline, so moving the mass inward is especially important. An axial flow turbine wheel has half the rotational inertia of an equal flowing radial turbine wheel.

Now tell us what that means in layman's terms?
K

I think 90% of people would prefer the driving characteristics from a axial or axial biased turbine wheel (certain companies call them mixed flow turbines "MFT") with the extra turbine drive you get low down which also enables you to run a much leaner AFR and still maintain good spool speed which most people look for these days. There is a trade of though and at higher shaft speeds you fall out of the optimum efficiency earlier meaning you'll need more EMP to keep driving the comp wheel compared to a radial which really comes on song at this point.
Last edited: Feb 14, 2020

I'm not familiar with the dual boost. After a quick google search, the pictures make it hard to see that it uses axial turbines. Is it axial turbine with radial compressor? Does Garrett have any pictures that could help me visualize how air flows parallel to the shaft rather than across it?
K

Can't find any pictures of the turbine itself but there a bit more of an idea of how the exhaust gas flows axially in this video.

KiwiDingo said:
Can't find any pictures of the turbine itself but there a bit more of an idea of how the exhaust gas flows axially in this video.

I can see it from the picture now... basically moves the turbine down stream a bit. Cool idea!
K

Lumpskie said:
I can see it from the picture now... basically moves the turbine down stream a bit. Cool idea!
Click to expand...

Yeah pretty much but also the profile of the turbine wheel changes and the inducer no longer needs to be much larger than the exducer like you see on radial designs. It's very cool indeed and it'll start becoming more and more common soon.
You must log in or register to reply here.
Share:
Facebook Twitter Reddit Pinterest Tumblr WhatsApp Email Link