so the history behind the unit.
a few months back i was building up a PZJ75 and i was looking for a R151 to swap into the unit, a couple calls to the local suppliers and no luck in finding one so i bought a parts rig. it was UGLY in the pics and the desription report so the plans were to sell the body and keep the drivetrain.
the truck finally arrives and the block that gave me a ride to pick the truck up from the train yard tells me it runs good (sqealing belt) but it was ugly. the rear doors have been repainted, the engine, body and interior looks like it has never been cleaned since the day the rig was bought new. i wish i would have taken some "fresh off the train shots" but i didn't.
i wanted the serial numbers to be registered if i wanted to build the frame into something else so i sent the truck in for the out of province and it passed with out a hickup... humm, maybe this unit isn't so bad after all. my buddy tells me to get the unit cleaned before stripping... yea why not. and it comes back real nice. not perfect by any stretch but real nice... hummm, my mind starts to wander, i do have a set of 35s and it could use a set of springs 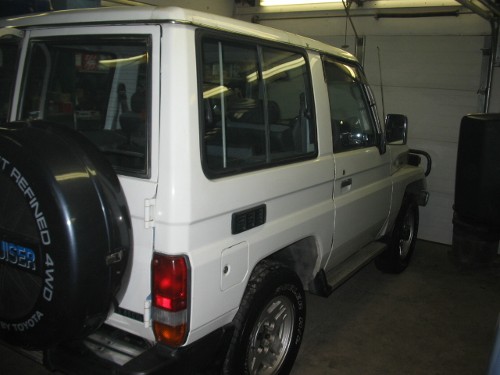 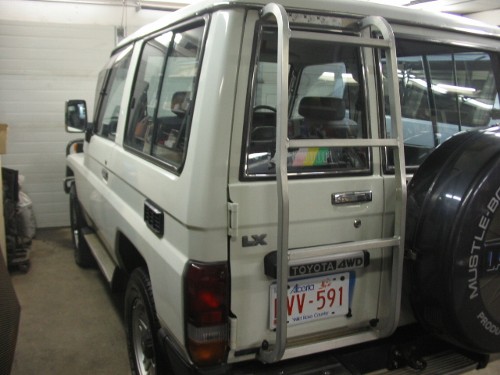 hummm, my mind starts to wander, i do have a set of 35s and it could use a set of springs which is an easy install. so a call to Bruce at PDP and a set of springs are picked up and the fun begins.
now normally a spring swap on a JDM cruiser takes about 2 hours but this one gave us a fight for our money. i mentioned to Rob that i thinks someone did a steering wheel swap to this truck cause it was just like working on a CDM BJ70 rather than a JDM. of course i had lent my tanks to a friend and the buggers were empty when we went to use them. i only had help for 4 hours and most of that time was spent getting the tanks to and from the suppliers. once we had the tanks the springs litterally fell out of the truck. now i am not sure what was the idea behind this but both rear springs had the milatarty wraps cut off, i have no idea why.
the front spring pack had the centering pin busted off so when the shock plate was removed the spring fell apart, all in all it is a good thing we were changing them out.
i removed 2 leafs per side on the rear spring packs since i find the stock 70 series to ride rougher than i like and this mod makes for a nice ride. the frotns i left alone but i think i will either run longer shackels or drop the bump stops since the tires rub on the front. 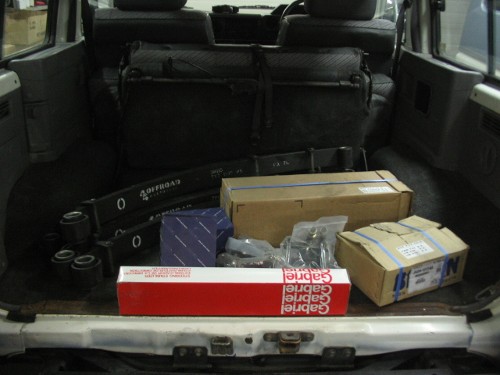 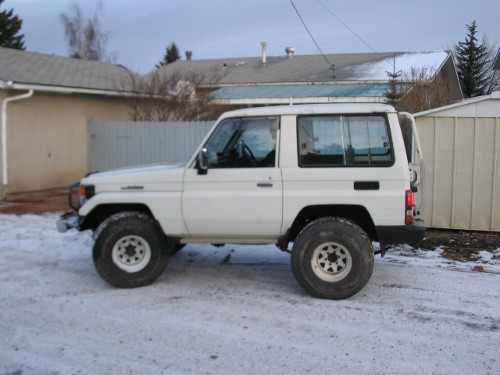 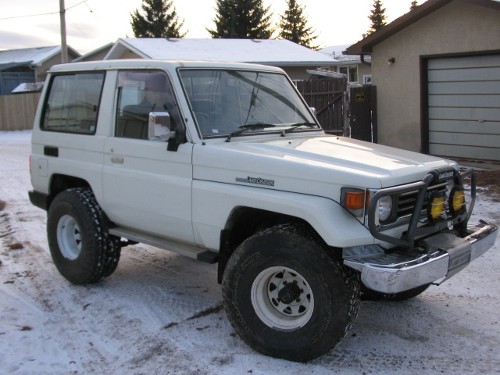 once i got the suspension under and the "new" tires installed the little girl really started to grow on me. now i have never liked the rear seats in the 70 series 2 doors. they have squat for leg room and are a PITA to get into and out of. i had a set of 1971 FJ40 seats kicking around from a project i did a few years back. these were already recovered and in excellent shape waiting for a new project so here it was. 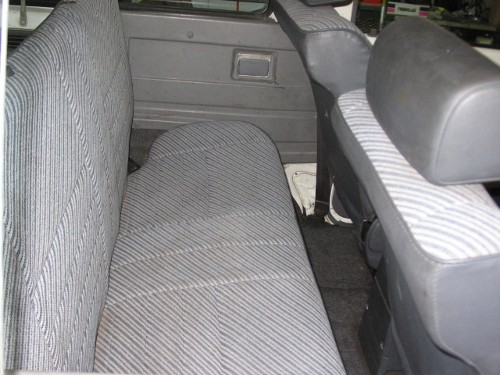 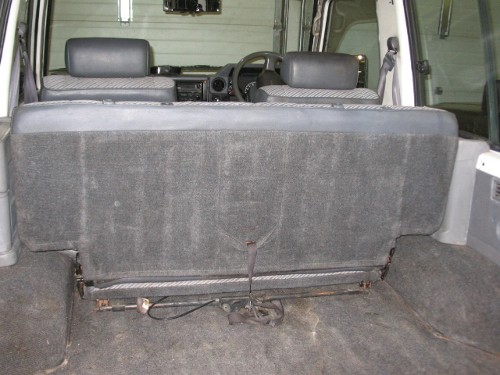 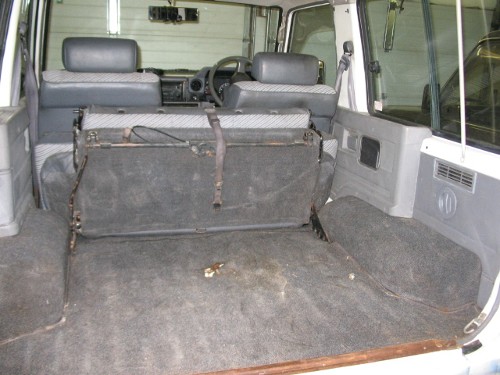 after removing the rear seat and the plastic trim along the sides the back really opened up. 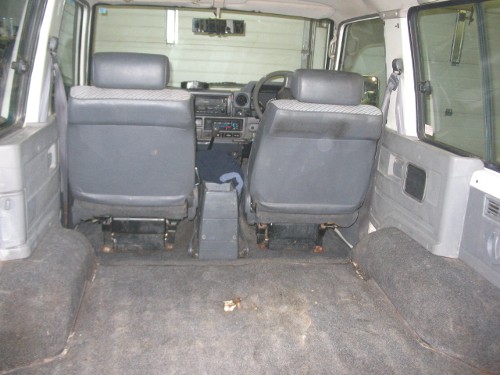 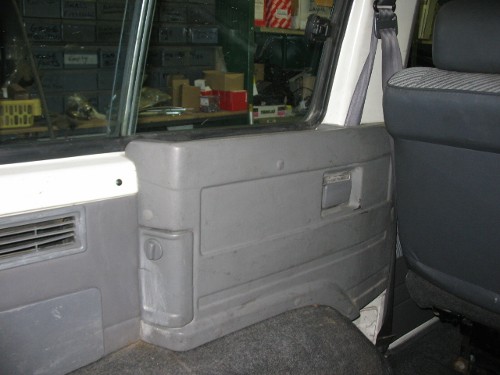 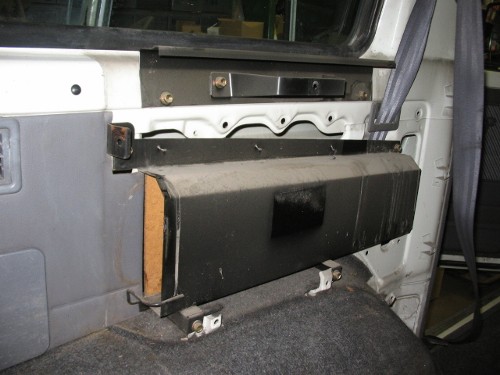 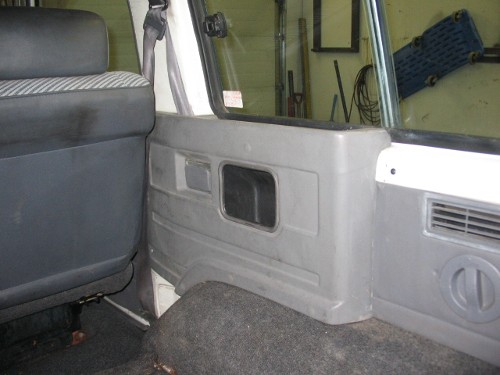 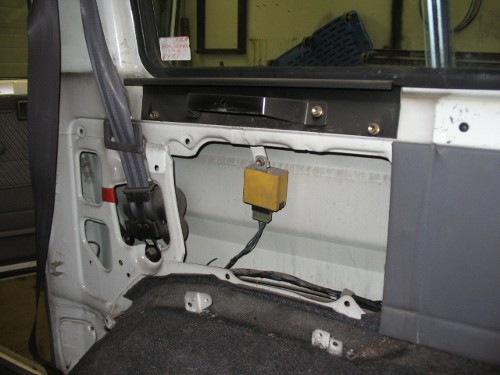 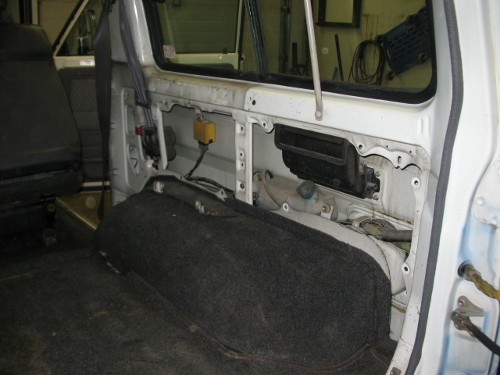 so for a rough test fit i set the "new" seats into place. the legs that i modified for the original application worked perfect for this one.
pnce i have the aluminium panels cut and installed then the seats will be properly mounted up. this will make for much easier entering and exiting the rear plus it give room for 4 people in the back. when folded up then there will be no loss of storage space.
more pics to come as the project moves along.
i want the 4.56 out of the PZJ75 and so i will seap a set of 4.11s intot he 75 and then see if i still need to put a 5 spd into it, if so then the R141 will be swapped into this rig and the R151 will then reside in the 75.

oh well, it is all in the name of fun. strange how JDM parts rigs end up as road use...

cheers and thansk for following along... 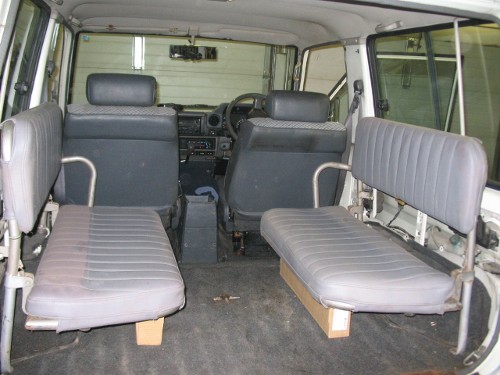 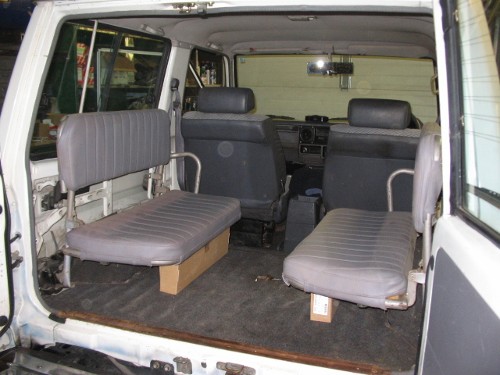 for sale? how much?
thanks
gerry

Gerry,
it was to be a parts truck so that thought never crossed my mind, i guess it would come down to how much i do to it by the time i am done.
shoot me an email and let's discuss it.
wayne@crushersrule.com
cheers

those seats look great in there wayne. sharp looking rig.

thanks Ige,
the truck is much better than i expected. and those seats are a perfect length for a standard 70 model...
cheers
S

Hey your HZJ75 tires and wheel went on it. Sharp.

Should be fun rig to wheel.
8

Did your mom ever tell you if you haven't anything nice to say then just shut the fawk up???? PLEEZZ...do us all a favor and go play in some heavy traffic

Brett,
thanks but everyone is entitled to their opinon, i expected some to like it and some not to. i did this for ease of entry/exit and for a bit more usuable space on the floor when the seats are up but mostly because i wanted to.

as for the snide side of the comment, i just figure some guys popped out the wrong hole and have a crappy outlook on life from then on.

crushers said:
after removing the rear seat and the plastic trim along the sides the back really opened up.
Click to expand...


What's supposed to go in that big black box on the LHS ?
I've never seen that mouldings style before

actually Michael's BJ70 rag top had the same trim pieces in it. i "think" the tool bag was to reside in there. i found this one in behind the black box.

an update.
i bought 3/16" aluminum for the side panels so i could bolt the seats right to the panel and have them secure. 1/16th for the rear doors since they are just decorative only. 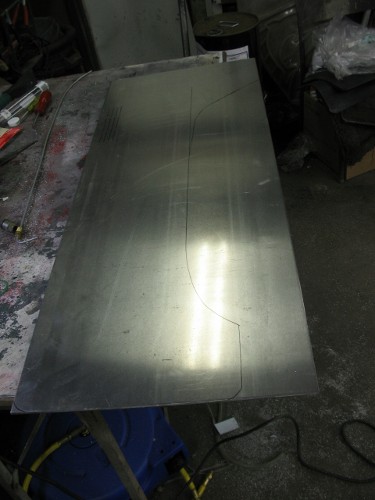 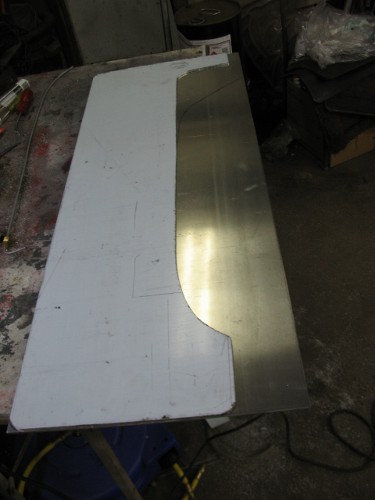 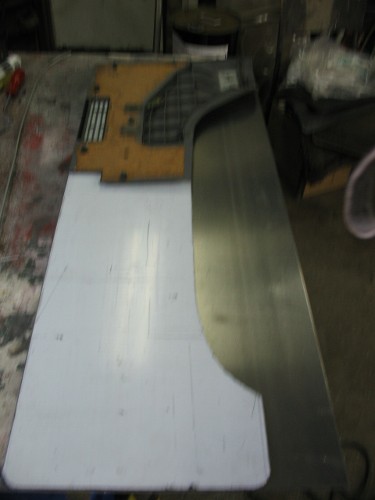 the panel can be taken back off and trimmed to fit the Jake under the problem is with the seat installed you can not get to it anyway so i opted to close the area up tight.
the fit was pretty darn good and even with the protective wrap on the interior is now looking cleaner. 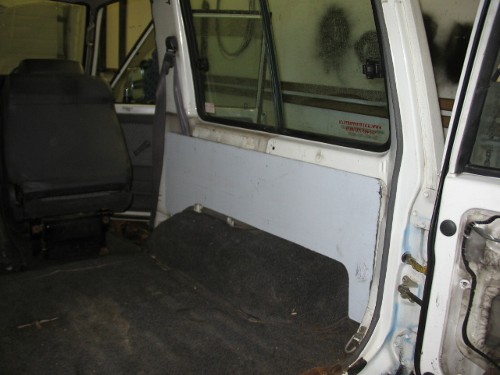 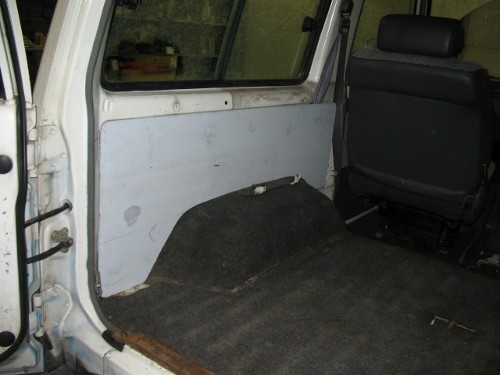 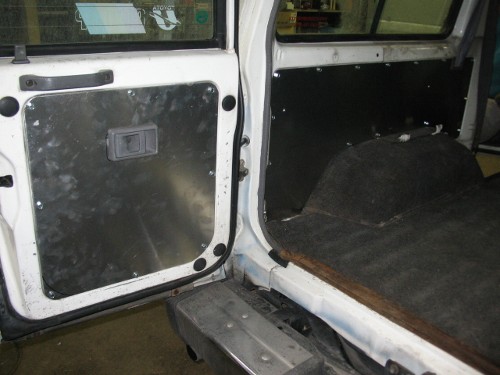 with the panels installed the seats go in. lots of room between the seats when vertical and room for 4 in the back.
i need to finish off the arm rests to the floor or wheelwell and then it is done...
thanks for following along
cheers 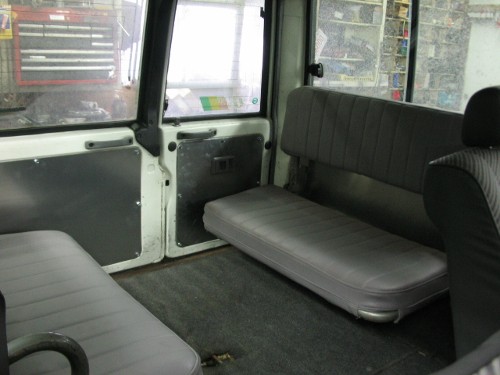 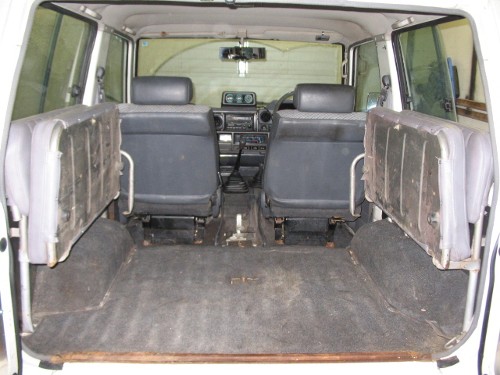 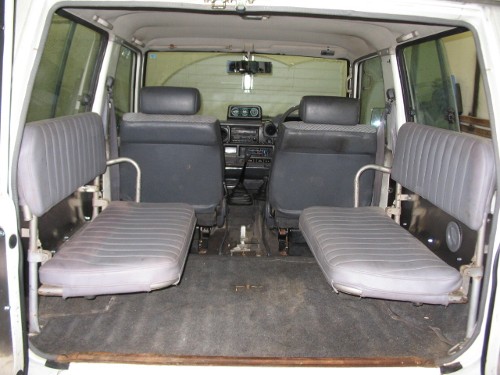