Ive been looking for an old Landcruiser for a long time. My college roomate got me hooked and since then i've been casaully looking for an old FJ40 or FJ55. Well in January I found one in the classifieds here on MUD and about a week later it was mine. 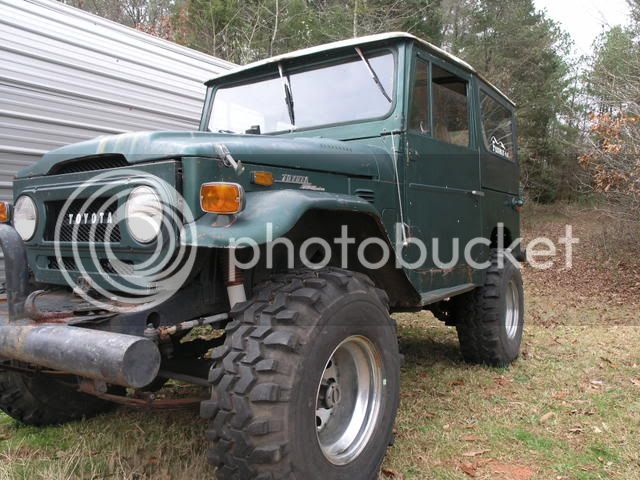 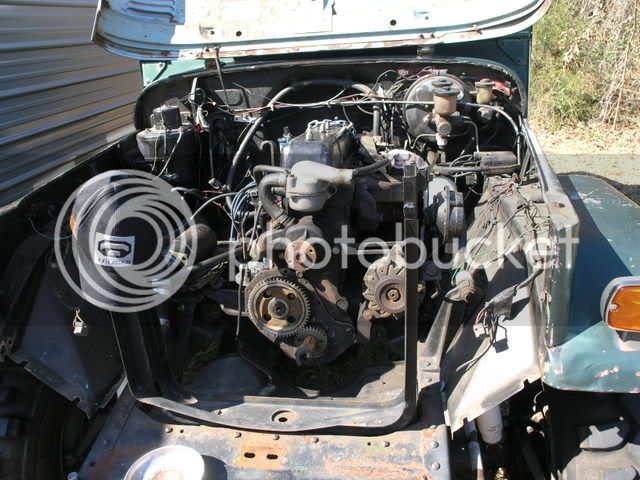 The PO had rebuilt the engine and then had kinda run out of time and money and stuff to get it all put back together. The engine was completely reassembled but was just sitting loose in the engine bay when i got it and the tranny was hanging in a ratchet strap sling.

It took me and my dad dang near a whole afternoon to get the engine mounted and the tranny stabbed in. The 3-speed clutch setup with the 3 arms fought us the entire time. But we at last had success. But not before breaking the chain on the engine hoist. The motor fell about 8 or 10 inches into the engine bay. SCARY. But it didnt hurt anything except putting a dent in the oil filter. 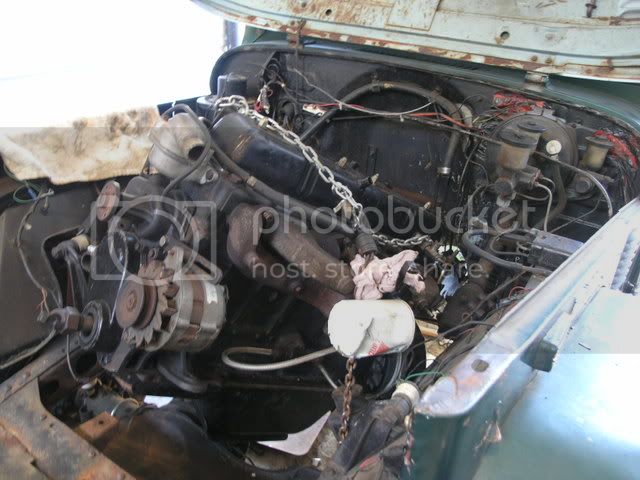 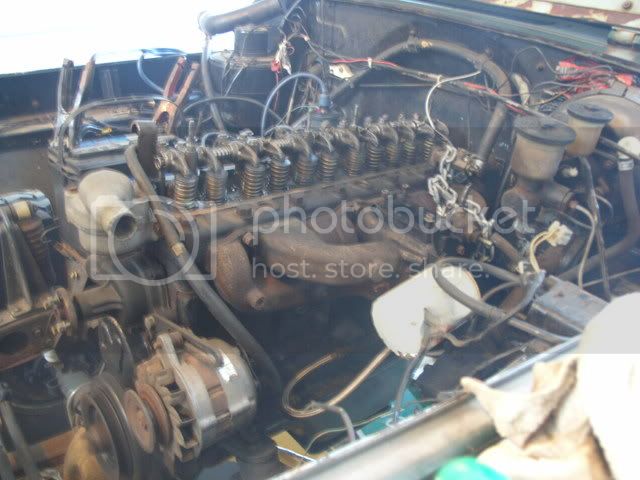 The next time I worked on it the objectve was to make it make noise. The timing was all jacked up. It came with a high-dollar Mallory distributor which looks nothing like the toyota one so there was no way to know if you were stabbing at the right angle. So we just put it in and lined up the timing mark on the flywheel and then from there figured out which contact the rotor button was aimed at and then made that terminal #1 cylinder. Then we dribbled a little gas into the intake and turned the key. After a couple tries we got it to rumble to life for a couple seconds. Hooray it runs! There is hope. 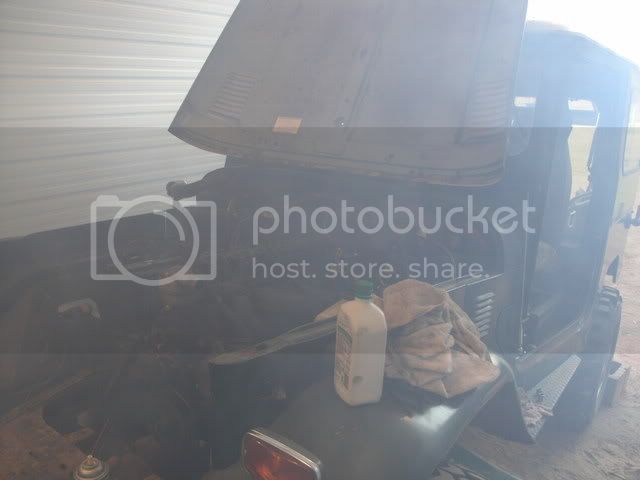 Then we tackled the carb. It is a big holley 2bbl that came with this messy sandwich of adapter plates, gaskets, and silicone to make it mate up to the intake. Took about 10 tries to get all the layers in the right order and orientation to make it fit. But once we did and hooked up the fuel line to it it fired right up and even idled. Checked oil pressure and made sure the valve train was getting oil and stuff and it was. I think its getting a Rochester Monojet in the not-so-distant future. 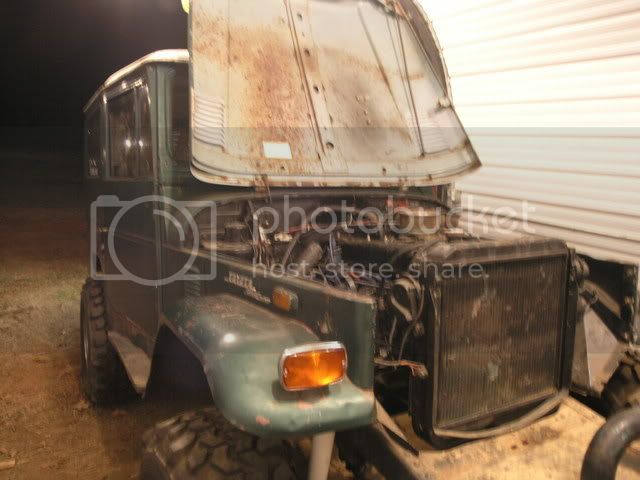 Now its little stuff. Water jacket and radiator and doors and dust covers. The windows still had the original felts and the cranks were completely stripped. So i got new cranks and felts from SOR. They were pretty easy to install. But the windows are so hard to move now. Is that typical for new felts or is there something I dont know?

I also have a '72' with new felts and stuff from SOR and they were difficult to roll up and down but i sprayed a little bit of silicone in the felt channels and kept the windows rolled up for a long time until they got 'molded' in....not so bad now.

Right On !!!!! keep posting nothing like seeing a Cruiser coming back to Life

That 40 was just a few miles from me. I hope you get her running well.

eventhough said:
That 40 was just a few miles from me. I hope you get her running well.
Click to expand...

its still not far... its sitting at my dads shop in Abbeville.

throwout bearing woes now. i moved it around the yard yesterday and then the clutch went goofy. Something down there is FUBAR'd now, the clutch pedal feels like a brake pedal.

I just replaced my pilot bearing and clutch - it was an easy job.

Call Rick Arflin @ Ralph Hayes Toyota (info in my sig line). They are in Anderson and will give you 25% off all parts. Tell Rick Steve Springs told ya to call.

Pull the tranny/tcase, pull clutch, pop out pilot bearing while you are in there and replace (I have a 'custom' puller you can use), pop in new throwout bearing - replace clutch if it looks bad - bolt everything back up and you are good to go!

There is an Upstate Cruisers meeting Satruday in Mauldin if you want to come. Shoot me a PM.

yea i've already had the tranny out once. Its got the 3-speed clutch which is the first clutch ive encountered that didnt have all the little radial springs. There was some debate as to which direction to orient the TO bearing during assembly round #1 since all of that stuff was in a box in the back and we had to figure out how it all went together. One side of the the bearing is flat and the other has a small step it it. which face faces the engine and which face faces the tranny? My book is unclear at best. it seems like the stepped face is supposed to contact the clutch springs but what do i know?
Last edited: Mar 5, 2009

well after dropping the tranny, the TO bearing is definitely shot. But i had another surprise. Sleeve on the front of the transmission that the input shaft came out of was broken...hooray...how do you break one of thems?

I need some TO bearing orientation advise before i put all this junk back together. which face of the bearing rides on the radial arms?

I got a Rochester 1bbl carb the other day for FREE from a fellow my dad works with who restores old Chevys. He had one just sitting in a box in his shop. ill probably give it a once through and a cleaning to make sure all the gaskets and stuff are intact. It looks like its in really good shape, we'll see what it does. That holley ive got on there is a mess and has 2 bad fuel leaks when its not running

Congratulations on your project. I know what you mean about getting everything lined up to get the tranny back in, it can be a pain. If you can't find that piece that is broke on yours I've got the 3pd out of my 71 you can have the part just for the cost of the shipping. Good Luck

thanks thornton. sor had a used one and its already on the way.

got all my clutch stuff straightened out i think.
at this rate i'm gonna be a pro at pulling the tranny in and out before long.

i confirmed that i had oil pressure and stuff and was able to drive around the yard a bit.
You must log in or register to reply here.