New cruiser owner and new to mechanics, but a diligent studier. (Don't assume I know anything, but I'm ready to learn.) New to mud but have found it a valuable resource; so thanks, all, for your expertise. 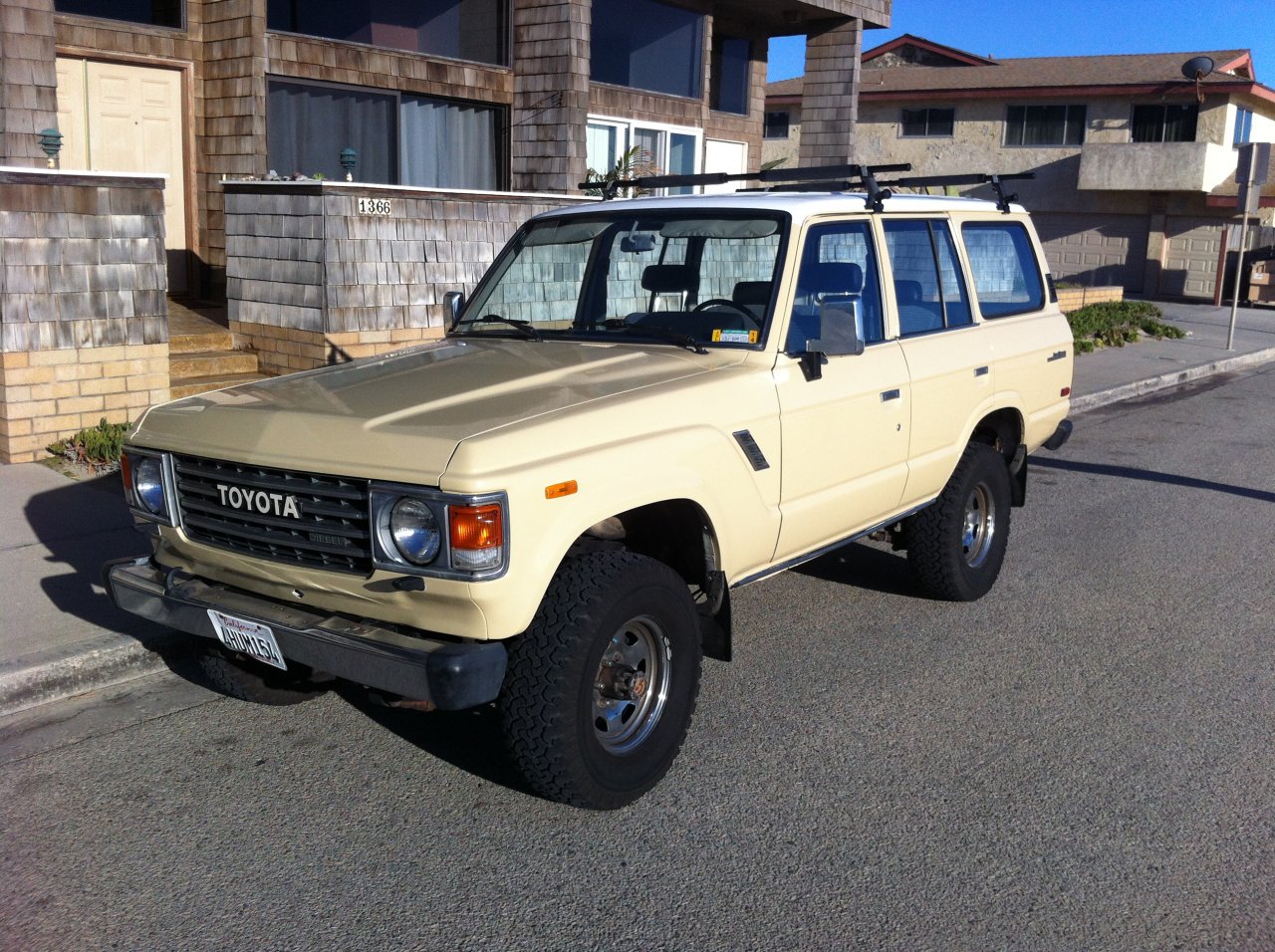 The backstory: I'm the third owner of this '85 FJ60 which got an '88 3B conversion from the first owner. Second owner added a veg system which never worked well, so it was disconnected.

Besides a few seemingly minor...quirks...the truck has run great for me. But there is some funny business in the fuel system: someone (the veg people?) added an electric fuel pump and in-line fuel filter between the out-port of the factory fuel filter and the fuel pump. According to the diagram in my engine manual, the fuel line has also been re-routed. It now enters the factory fuel filter first, then out that through the newer electric pump, then through the newer filter, then into the right side of the feed pump, then out that directly into the injection pump. I also noticed a while back that there was no priming pump, so I ordered one and put it on today, but the truck came to me with a plug where the primer should be.

The questions:
Should I be concerned about the funky fuel line routing? Should I/Can I restore it to the original?
Why would someone add a pump and filter? Can I remove them? There is a large bubble of air visible in the filter which I'm pretty sure is getting in at its connection with the fuel line.

Your input is much appreciated; thanks! 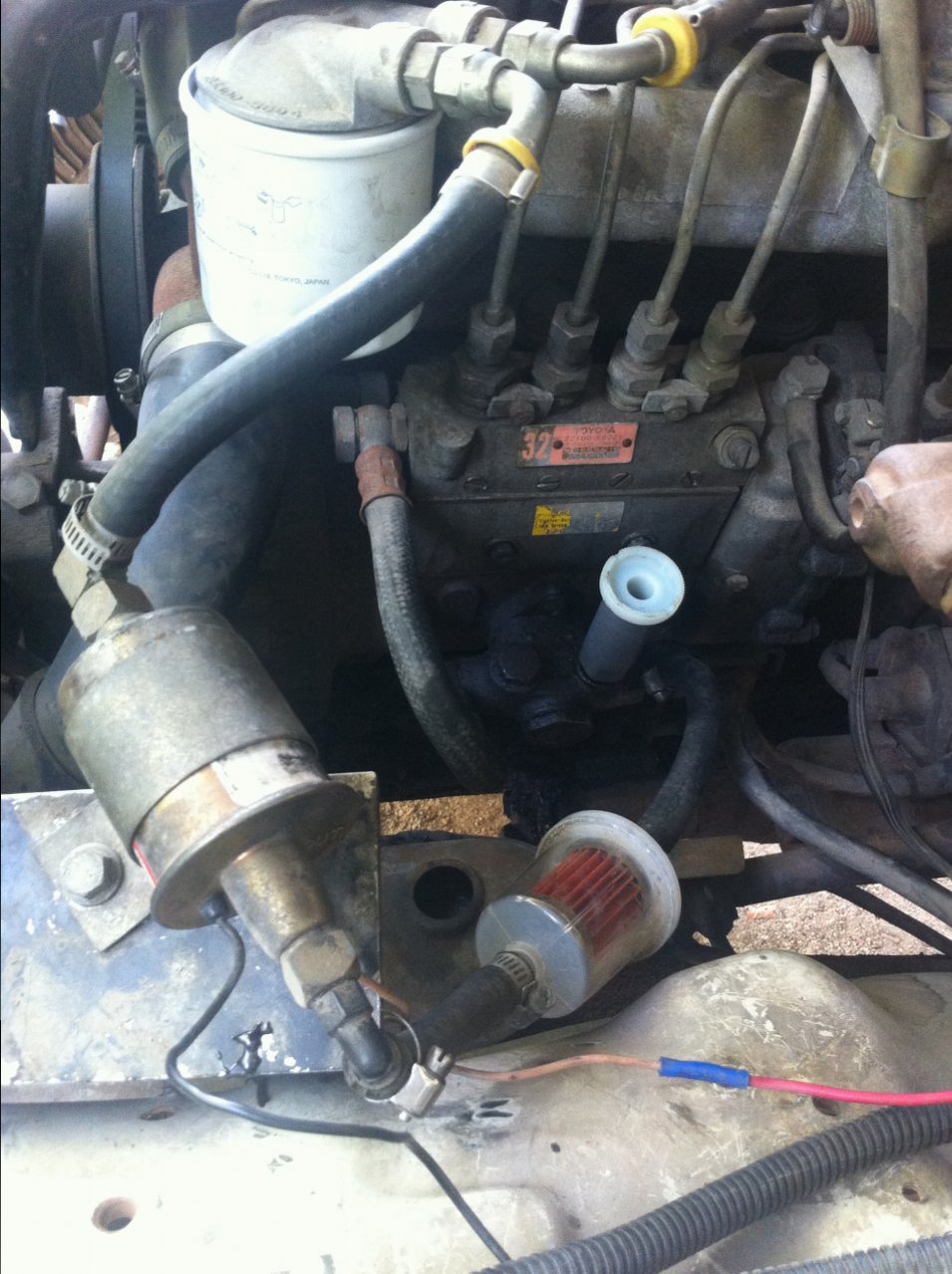 Welcome to the forum!
Maybe those extra inline filters were because of the bio fuel. Certainly the stock filters does an excellent job. Were it me, I would take out those 2 extra inline filters….but I am wondering if you have a sediment filter that came stock on the diesel Cruisers. They were mounted between the tank and the engine, under the passenger side frame as I recall. You might consider adding if you do not have one.
D

Thanks, Estancio. Maybe the viscosity of the veg oil required a booster pump and the extra filter. I'd rather restore it to the original routing, and remove the extra pump and filter–simplicity, right?

(I do have a sedimenter.)

Yes ,restoring it back to stock is the best thing you can do.
M

I agree restoring to stock would be a great way to go, especially if you are getting air into the system somewhere due to the mods. Besides seeing the bubble, are you noticing any symptoms of air entering your fuel system? If you keep it the way it came to you, I am guessing that the added electric pump is doing the work of the primer pump and adding one would therefore be of no benefit.

And like others again, I think the fuel routing should go back to normal (putting that decent OEM filter as last thing in the fuel line before your injection pump).

With that modified setup you have there, any crud that happened to drop in when you fitted the primer would have gone unhindered straight into your injection pump!

As for fitting a sedimenter, in your location I doubt that's necessary... (My BJ40 was never ever fitted with one.)

A sedimenter is important if you're likely to receive dodgy fuel (mainly fuel contaminated with water) or if you live in a climate where condensation regularly forms inside your fuel tank.

That factory fuel filter (unlike the silly inline petrol one) acts as a sedimenter anyway because of the way it is designed.