I've read through every FAQ, tech link and done numerous searches, followed all of the previous suggestions and my problem still exists:

I have a 1974 FJ40 that had drum brakes. I bought a set of axles that had been converted to SOA with disc brakes on the front using mini-truck parts on an older style axle housing. I think it is an older axle because it uses the 9mm brake line fittings at the T-block and calipers.

I converted the rear axle to disc using a JTO kit and I installed a new JTO's disc master cylinder at the same time.

The brakes work great. But after driving a few miles and making a few stops you can feel them start to drag. This will get worse with a few more stops to the point that the vehicle cannot move. The only way to move the vehicle is to release the line pressure by removing a small plug on the bottom front of the MC. You will get a few drips (maybe a tsp of fluid) then the brakes will release and everything will be fine for a few more miles/stops until it eventually locks up again.

I have adjusted the pedal rod under the dash so far that if I go any further the brake lights stay on all of the time. I can see the pedal move a good 1/4 inch or more before the black plunger on the brake booster starts to move. The pedal has a good, strong return spring on it.

I pulled the MC and removed the rod from the booster that has the adjustment nut on it, and I tightened the nut down as far as it will go. It tightened down a good 3-4 full turns.

I have included a picture of my MC. As you can see, there are no large nuts where the brake lines attach so as far as I know this unit does not have a residual valve in it. I have circled the plug that you take out at the bottom front to release the pressure. It looks like there is a line coming from it but there isn't. I have even taken the front and rear lines off at the T blocks to see if there are residual valves in the T-blocks, and there doesn't appear to be any.

I THINK its the front brakes that are locking. I installed a proportioning valve today and adjusted it so minimum pressure was going to the rears and maximum to the fronts. Setup that way, the brakes will start to drag and then lock completely quicker than before, so I think putting the extra pressure to the front makes the problem happen quicker. But to be clear, the brakes were dragging and locking up before I installed the proportioning valve.

Is there a residual valve in this MC I am not aware of? If so, how do I get it out? Do I need to take the rod out of the booster and cut it even shorter? I am at the point of putting my old 2 reservoir MC back on. I did pull both of the residual valves on it, but its in pretty sad shape. I would much rather figure out what is going on with this new MC? Any ideas?
Last edited: Apr 11, 2009 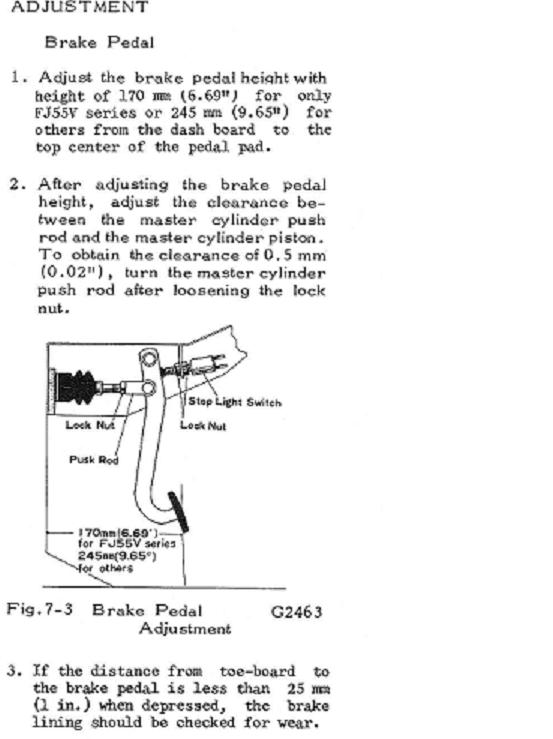 But you are right hard to find on a search! 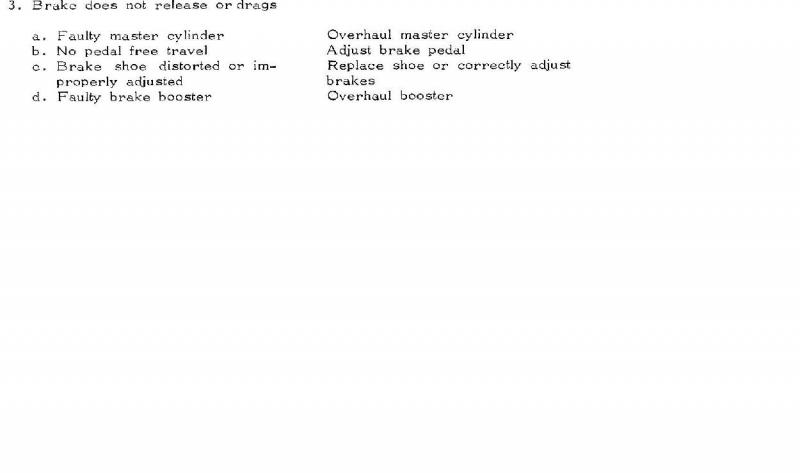 4 pages of posting then he added some washers to space his MC out further and adjusted the rod---through the wringer on this one!

If you have a positive feeling about the rod adjustments being correct, the only possible cause would be line restriction or a faulty master. Have you checked for a pinched metal or collapsed rubber line?

with a diferent MC you may have to trim the rod into the booster to compensate
Last edited: Feb 22, 2009

Hell! drive it around till it starts to lock up. Go around and feel each brake and report back as to which is the hottest. That will help narrow down the problem area.

I'm not seeing a proportioning valve in the pic. Where might that be located?

Thats my question too. Unless there is a real small residual valve stuffed up in the bore where that plug is on the bottom front of the MC, I have no idea where it could be.

As I said, I have adjusted the rod under the dash to the point the pedal moves a fair amount before the large black plunger for the brake booster even begins to move.

I'm pretty certain it is the fronts that are locking up. I like the idea of getting the brakes to lock up then loosening the MC from the booster. If they release, we know its still related to rod length. If they dont then there has to be a residual in the circuit somewhere. If nothing else I can stick the old MC back on. If it doesnt lock up then we know it has to be in the MC.

I have checked the hard line from MC to frame mount. I have a stainless steel flex line from that point to the T-Block. All looks to be OK.

I believe it's possible to have the actuator rod from the booster to the MC too short, as well as too long. Too long and the MC piston will not return fully when the brakes are released. When it is short, I think it can fall out of position in the concave pocket in the MC piston and occasionally prevent the piston from returning fully, keeping pressure on your brakes. I think you need to carefully measure the length of rod needed (difficult, I know, because you have to measure the two different parts and allow for the overlap) and then adjust the rod just a hair under that measurement.

There is a procedure in the manual, but it calls for a SST. You'll have to improvise.

MtnTrucker said:
I'm pretty certain it is the fronts that are locking up.
Click to expand...

pretty certain don't cut it! you need to know for sure if you want to get this thing fixed. Do the feel test, whats hot and whats not.

I am guessing you need to:

- either shorten the booster rod

- or space the master cylinder out from the booster.

I had to space my master cylinder away from my booster to get things to work correctly, make a spacer or use some thick nuts laying around. I went the nut route and it worked out fine. I would reccomend throwing some nuts in between your booster and master, if it solves the problem, your rod is too long and you need to do one of the above.

- either shorten the booster rod

- or space the master cylinder out from the booster.

I had to space my master cylinder away from my booster to get things to work correctly, make a spacer or use some thick nuts laying around. I went the nut route and it worked out fine. I would reccomend throwing some nuts in between your booster and master, if it solves the problem, your rod is too long and you need to do one of the above.

We only need the one that works! No offense,--- just jokin;p

When I did the mini-truck booster swap I had to CUT the rod about 1/4" to get the adjustment anywhere near close.

My vote is the master to booster rod still needs attention.


Coolerman said:
When I did the mini-truck booster swap I had to CUT the rod about 1/4" to get the adjustment anywhere near close.

My vote is the master to booster rod still needs attention.
Click to expand...

I think Coolerman wins the prize - I went out and drove around till I felt the brakes start to drag, then headed for the barn. By the time I got to the house I had to put it in low range to get it in the garage. I took the 4 nuts off that hold the MC to the booster and as the last nut came off the brakes released, I know this because it started rolling since I had forgot to set the E-brake

So I pulled the rod out of the brake booster and stuck it in my old MC that was chucked up in the vise. From the flange face where it bolts to the booster to the tip of the rod was 2.75". I stuck it in the new MC and took the same measurement and it was 3.00"!! Aha, with the new MC it was a full 1/4" longer and this was AFTER I had tightened the adjuster nut all of the way down!

Cutting the backside of the rod off would do no good since it just slides on the brake booster rod. So I unscrewed the adjuster bolt all the way and you can see the threads are recessed and start at least a 1/4" down from the tip of the rod. So I ground that end down a full 1/4" and discovered you also have to shorten the adjuster bolt at least the same amount or slightly more to get it to screw all the way down.

Now when I put the re-worked bolt in the new MC, it measures 2.75" from the flange face to rod tip, same as with the old MC. This is a simple procedure and easy to do since the rod comes out of the booster. It only took a few minutes to fix and I thought this was better than spacing the MC out from the booster. My booster studs were so short that if I put 1/4" of spacer in I would have only gotten a few threads on the nuts. That didnt look safe plus it would let crud into the booster.

You may want to add this measuring of the rod from the flange face between old and new MC's to the FAQ's and recommend you always check that measurement when changing MC's. If you can shorten the rod enough with the adjuster you're OK but if not you need to shorten it up.

I haven't done a test drive yet but I'm 99.9% certain this will fix it. Why didn't I think of this before

MtnTrucker said:
You may want to add this measuring of the rod from the flange face between old and new MC's to the FAQ's and recommend you always check that measurement when changing MC's. If you can shorten the rod enough with the adjuster you're OK but if not you need to shorten it up.

I haven't done a test drive yet but I'm 99.9% certain this will fix it. Why didn't I think of this before

I do not know why either, as it is discussed in many threads in the Frequently Asked Questions list specifically concerning brakes dragging or activating after driving for a bit...

Glad you figured it out.

Correct me if I'm wrong, but I've read every FAQ and post on this topic. It may talk about adjusting the rod length but it doesn't talk about how to measure to determine the proper length nor how to shorten the rod if you cant shorten it enough by adjusting the bolt all the way in.

fresh ideas? like what: driving the cruiser around with locked up brakes and feeling stuff? genius.....
You must log in or register to reply here.

A
Spacer needed for a early oil filter