poor low idle, up and down idle at times, idle solenoid help (1 Viewer)

I am currently putting new vacuum lines on all ports where needed ( 3mm?) I wired my idle solenoid to the coil (+) and grounded other wire on the replacement idle solenoid I ordered from cool cruisers. I have eliminated smog controls as my smog pump was not working anyway. Is the emission control computer needed with this shortcut hook up? I have capped all other former vacuum connections that were not needed. Can't get good low idle to set exact timing, and after heating up and running good, it revs up and down when restarted hot at idle until I drive it awhile. I will be checking my brake booster because when engine stalls I loose hydraulic braking also. (I assume due to vacuum loss?) The braking problem is temporary but dangerous. I don't think I need the computer at all anymore. Thanks for any help you can give me. The carb has also been rebuilt about 100 miles ago.
Sort by date Sort by votes

On my '75, I'm desmogged, but I'm running the original carb, desmogged. The Vacuum Switching Valve is partly controlled by the computer in a stock set-up. On this early 2F carb, a smog setup might have an effect on the Power Valve in the carb. That vacuum line is now hooked up to the manifold, and basically, it could be thought of as essentially off anyways. Low, or no vacuum activates the power valve (on) in this, and other, carbs.

Regarding the idle cut solenoid, it should stall the engine entirely if it looses power, so it sounds like it is, at least partly, working correctly.

Sounds like a vacuum problem? Could be that the float needle valve isn't correct either? I wouldn't be surprised if corrosion in the distributor is allowing for shaky timing. Did you use compressed air on the various circuits during the rebuild? I've seen throttle linkage adjustments that behave like what you are describing.

I have three different idle cut solenoids, two are machined the same, one has a different profile for its o-ring groove. Out of the four o-rings for the solenoid, I also observed measurable differences as well. So, I kinda am lost with respect to standards regarding the original carbs. You might want to verify that the carb has a decent electrical ground to the engine block.
Upvote 0 Downvote

I am running original carb, newly rebuilt. also the idle solenoid is new and running on constant "on" since I bypassed the emission computer that I don't think a 75 has. I really feel I have a vac leak and I just need to keep on looking. thanks for you input
Upvote 0 Downvote

One of the best investments you can make is a good vacuum gauge(autometer)--MUD had a diagnostic for vac readings back in 2013--did you use Pinhead's video when you rebuilt the carb?--excellent reference! 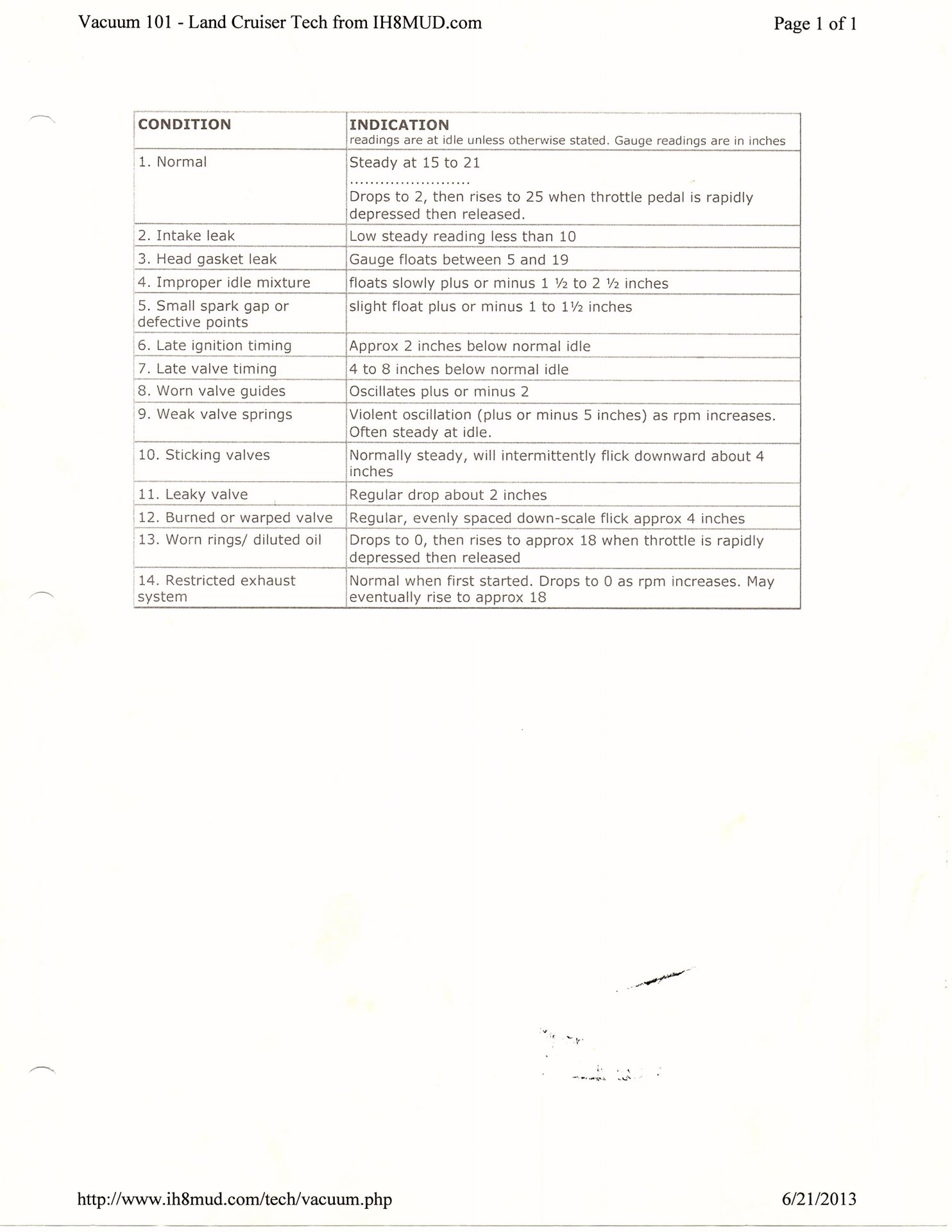 Thanks, I'm sure this will come in handy. My carb was rebuilt by a shop in NJ.
Upvote 0 Downvote

Beckley said:
Thanks, I'm sure this will come in handy. My carb was rebuilt by a shop in NJ.
Click to expand...

where would you hook up vac gauge. I have never used one. (real amateur) but I,m good at following information....thanks
Upvote 0 Downvote

Beckley said:
where would you hook up vac gauge.
Click to expand...

I just went through this to discover my manifold leak. You want manifold vacuum, not ported vacuum. If you have an adapter on your vac gauge (most come with) then hook to the brake booster hose as long as you are sure this is good, or brake booster fitting with a new hose. Alternatively you can use the fitting on the carb insulator.
Upvote 0 Downvote

Chestcutter said:
I just went through this to discover my manifold leak. You want manifold vacuum, not ported vacuum. If you have an adapter on your vac gauge (most come with) then hook to the brake booster hose as long as you are sure this is good, or brake booster fitting with a new hose. Alternatively you can use the fitting on the carb insulator.
Click to expand...

thanks
Upvote 0 Downvote
You must log in or register to reply here.

Idle issues - Advice on tracking the problem down