Hi Everyone!
I've just purchased a 1969 FJ40 from a good friend who also referred me to this site. The truck is not running/has a bad engine and has been sitting for 10 years. So...I have a 1970 Pontiac 455 V8 sitting around that I'd like to put into this rig. Can this be done? Thanks for any help! -Tom

Yes, anything can be done, as long as you have enough money

Yes, it can be done. The editor of Peterson's 4Wheel & Off-Road has a 455 in his WWII jeep (a Ford GPW) with a SM420 transmission. So, if you can find the bell housing that will mate a SM420 to Pontiac 455, then it can be adapted to the Toyota T-case. Others have put big block Chevys and big block Fords in the FJ40. It will just take a bit of work to get it done. Good luck.
Kevin

damn man i thought my buddies 428 was big in his le mans, that thing is gonna be ridiculously torquey ... it can be done... theres alot of room in the engine compartment of the fj40, theres a guy in the 60's tech whos done the 502 big block and i honestly think that the 40 and 60 have a comparable sized engine compartment. for what its worth the only limitations in the project is your skill...

One other thing that I forgot. If you use an aluminum manifold on that engine, it will weigh less than an all cast iron small block Chevy. GM has a group of engines that use what is called, IIRC, investment cast blocks. These are the BOP (Buick, Olds, Pontiac) 455 and Cadilac 472 and 500. All of these engines in stock trim weigh slightly more that the SBC. If you use an aluminum manifold they weigh less than the SBC and if you add aluminum heads, well you get the idea. And yes, there is a cruiser out there with a Cady 500 in it. I saw an article on it in a 4x4 magazine.

The BOP 400 big block might also be in this group, but I'm certain if it is part of this group of engines.
Kevin

if you have the stock 3 speed all you need is an olds or pontiac standard shift bellhousing and the 3 speed spacer to make it bolt up. use the gto flywheel with gm clutch parts. you will need a rear crossmember and have to make motor mounts i used a truck radiator but maybey a toyota 4 core would work not sure .mine was a 455 super duty with a tripower on it ran it for several years then went to 501 caddy uses the same bell housing not any harder than puting in a chevy except its faster good luck
all sold except 69 fst ,have been replaced with 6x6 military trucks and a couple bobbers.

Pontiac engines make great offroad torque and is a fairly easy swap.
I have run a Pontiac 350 for years and next week I'm swaping the 350 for a balanced 455 that I just finished building last week.
I have run the 350 along side several 350 SB Chevy Cruisers and none of them have been able to lug down like my Pontiac 350 can. It will still pull, down to 400 RPM before it dies because of the longer stroke and longer rod make for more torque.
The Engine in stock form is heavier than a small block chevy but lighter than a big block but will make up for the weight with the torque.

All you will need is a BOP bell housing and you can bolt up a SM420. The clutch fork may have to be shortened, mine did and its on the drivers side along with the starter.
You will also need an angled oil filter mount if you have a straight one on the engine now to get clearance from the frame
They lend themselfs well to home made engine mounts but don't work very good with headers. I have always had to use the stock exhaust manifolds because the width of the heads places them just inside of the frame and not enough room for the shorties.
I was able to make my own mount and mount a York compressor
The 350 worked well with the stock cruiser radiator but last fall when I started building the 455 I also installed an aluminun 2 core 26X19 figuring the 455 will take a little more.
The only negitive is you will not be able to buy bolt on parts for the Pontiac swap you will have to build everything but in my opinion that is the not so bad.
72 FJ40, 455 Pontiac, SM420, Orion t-case, PS, Disc BK's, GM tilt column, ARB's, York air, Painless Wiring, Autometer Phantom Guages, Custom 4 speaker cd player w/ sub, Heated & Power bucket seats, 36/14.5 TSL's. Union Pacific Train horn

gto and olds use the same bolt pattern as chevy you can use the chevy kit to put in the pontiac except motor mounts. hooking up carb and gauges is same as any gm. basicly it will bolt up to the stock tranny t case if you go to the sm 420 then your into a whole new ball game need more adapters and a lot more money. on the 3 speed you can switch front and rear d shafts for engine position also pilot bearing is the same good luck
all sold except 69 fst ,have been replaced with 6x6 military trucks and a couple bobbers.

Once you get a BOP belhousing then you will be able to bolt up a "gm" tranny like a SM420 or 465, you may even be able to use an nv4500, I'm not sure if the GM trannys changed bolt paterns in the later years.


Pic of the 455 ready for the swap
Specs
455 bored 40 over decked and line bored
Crank turned and balanced
Foraged flattop pistons and rebuilt rods with ARP bolts also balanced
Later model 6x 400 heads to give me 9.25 to one compression
Aluminum Rollor rockers
Gear drive
Ram Air III cam (rated for 360 horses in the 400) tried not to get to wild here still wanted the stump pulling low RPM torque 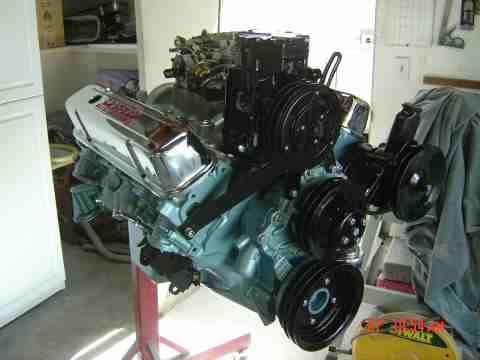 IIRC the NV4500 has a different bolt pattern for bolting up to the bell housing.
Kevin

Ahh, finally an engine swap I can really dig! I grew up in a Pontiac family where tri-power and super duty went along with pass the potatoes and meatloaf!!
There's nothing like the torque of a poncho powered car!
Now I'm thinking of pulling that poncho out from under the work bench and finding a new donor truck!!!
1978 (mostly) FJ-40, lift, 2F, bigger tires and custom swiss cheese body panels to reduce weight!
Various other toys 87 4runner, Motorcycles Ducati and Triumphs with an old Mach III in the mix.

426 was a typo seems like nobody asked this poor guy what tranny he was running all anyone did is say if you do this and this and this for general use there is nothing wrong with the stock tranny it will hold up to a lot of street racing good luck
all sold except 69 fst ,have been replaced with 6x6 military trucks and a couple bobbers.

Might I suggest fully boxing in your frame and adding 1/4 inch crossmembers where ever possible. With that much torque you are going to twist the holyshoe out of your frame.

pontiota said:
..... Ram Air III cam (rated for 360 horses in the 400) tried not to get to wild here still wanted the stump pulling low RPM torque
Click to expand...


If you want more bottom end torque, have you thought about advancing the cam two or four degrees?

It's a good tradeoff. If I have to change the waterpump out on my 350, I'm going to advance the cam on it.

One caveat - if you have a high lift cam and high compression pistons (popups or flat tops with small valve eyebrows), and especially with oversize valves, you need to check for piston clearance. I have yet to see a mild to medium cam in a stock or mildly warmed engine that had clearance issues, though.
Today's Zombie Apocalypse Threat Level is MODERATE.

shelfboy1
Not trying to bust your balls just tring to keeping the facts straight
Brian in Oregan
I thought long and hard about which cam to use and I also considered advancing when I finaly relized I'll have more torque than I can use with the cam set straight up Due to 455 cubic inches. Actually the cam I'm using is a stock grind and lends itself well to pump gas due to the late intake close (bleeds off some of the cylinder pressure at low rpm's) and I'll be running 9.25 compression on a large bore with Iron heads. I was a little worried that I would not be able to burn 87 from the pump and advancing the cam would make it worse.
Steve
72 FJ40, 455 Pontiac, SM420, Orion t-case, PS, Disc BK's, GM tilt column, ARB's, York air, Painless Wiring, Autometer Phantom Guages, Custom 4 speaker cd player w/ sub, Heated & Power bucket seats, 36/14.5 TSL's. Union Pacific Train horn
F


Maybe it's a BOP 350?
72 Fj40, lots of mods, nothing original-big fan of Mud.
Sorry if I am slow getting things in the mail, it's just this stinking job keeps holding me back.

shelfboy1 said:
gto and olds use the same bolt pattern as chevy you can use the chevy kit to put in the pontiac except motor mounts.
Click to expand...

The Chevrolet bell housing is independent of all other GM cars up to the mid 80's when GM made the "corporate" 350 (Chevy). Pontiac, Oldsmobile, Buick and Cadillac share the same bell housing pattern from mid 60's to mid 80's.

Here is a universal GM bell housing to mate to a TH-350 if you want to go the auto route.


"I would remind you that extremism in the defense of liberty is no vice. Let me remind you also that moderation in the pursuit of justice is no virtue."
Barry Goldwater
You must log in or register to reply here.