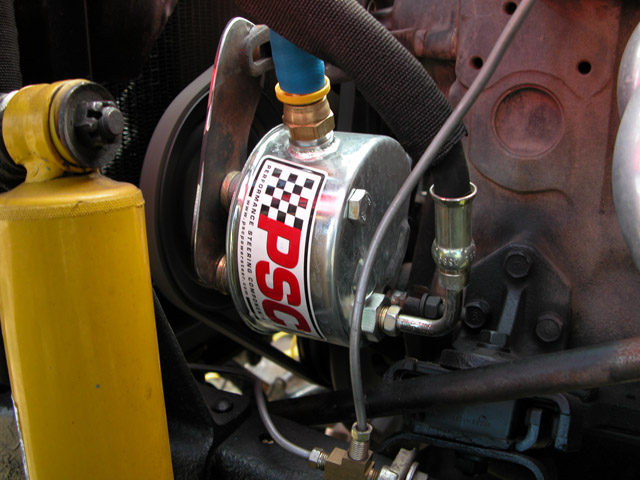 "Poseur," what kind of PS pump is that in the pic?? A Saginaw pump with a remote reservoir? A high-output Saginaw pump??

It is a high output pump from PSC....I put it on when I changed out all the AGR JUNK that was on the truck for less than two years...There steering gear took a poop, and wanted to run a larger res. so I went with the PSC goodies, and they have been working great ever since! Tom at PSC has a customer for life. 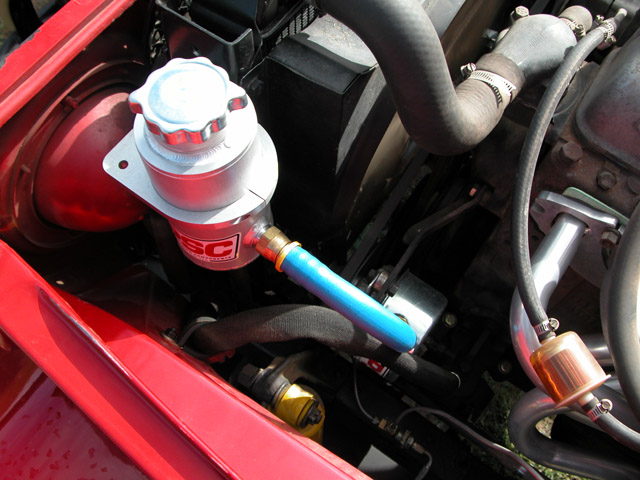 That`s a nice set up.

Here are a few pictures of where I'm at with my PS conversion. Uses a 2F smog pump and 2F alt. bracket for the alternator. I had to grind a little out of the inside of the smog bracket so the pump bolt holes would line up with the smog pump holes.

Its extremely solid they way it sits right now - I can't budge it. I just need to finish a few things up on it.
Last edited: Dec 2, 2005

Thank you for the artwork Toad!

That helps this crap SOOO much!

There is not a “through bolt” on this Saginaw pump assemblie. The stock smog bracket was drilled out to fit a 3/8" bolt, and the radius of the front part of the pump mount casting was ground out square so that the pump would line up easier, and the casting would not interfere with the reservoir housing. The spacers you talk about are used on the front, and not the rear. The rear part of the mount was cut at the top so that you could install a stud in the rear part of the pump housing and simply drop it through the bracket.

You will need a nut on the stud to seal the can or reservoir housing, as there is a seal between the pump body and the can at that point, just like the other spot more towards the top of the reservoir, that just has a bolt holding the can on.

I just made a piece of 3/16” flat steel have the bolt pattern similar to the front of the pump housing, and attached that adjusting bracket to the pump. You will need some thicker washers to space the steel off the front of the pump due to irregularities in the casting that will not allow this piece to sit flush, not that big of a deal really. I just welded a nut to it so that you could use it for the belt tensioner. The adjuster arm, I have learned is a 73-smog pump adjusting arm that was used when the smog pump was on the other side of the F engine. I am sure that you can find something to work for that.

cruiserhead said:
That`s a nice set up.
Click to expand...

It has worked great, and I would not think of using anyone elses components.

It has worked great, and I would not think of using anyone elses components.
Click to expand...

That makes me feel a lot better about my choice, not that I didn't feel good before, just haven't field tested my PSC set up yet.

I used a different mounting method. 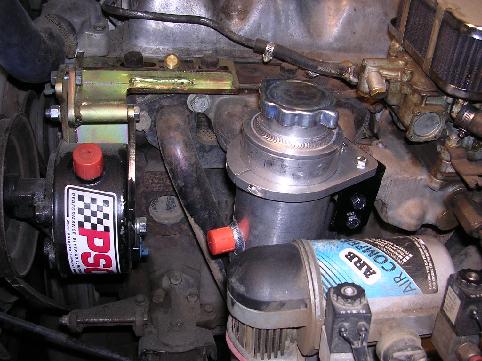 Is that the MAF bracket?


What is supporting your res?

4Plus I think, I got it from Rocky Mountian Outfitters? I'll check and let you know.
I built the mount for the res. to fit the OEM air cleaner mounting holes in the Intake manifold, click on the thumbnail.

Thanks for the write-up Poser. That clarifies a lot. I have been wrestling with how to get around the cast shape of the smog pump mount. "[A]nd the radius of the front part of the pump mount casting was ground out square so that the pump would line up easier, and the casting would not interfere with the reservoir housing."

I'll either correct my "art" or delete it so as not to confuse.

Cothran, thanks for the links. This is probably more like what I'll end up with given what's on hand here. I like the smart way you retained belt tension adjustability, though I still have the adj. bracket for my smog pump and will try to use it. 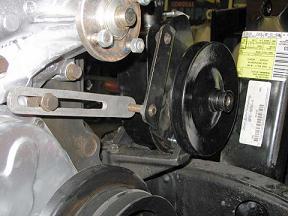 Poser said:
Is that the MAF bracket?

4Plus bracket purchased from Man-A-Fre.

aren't you supposed to mount the reservoir outlet higher than the inlet in the pump so you won't have an overflow problem? ( the same principle applies to radiators, the radiator cap has to be higher than the thermostat housing , so no air pockets get trapped in the engine ).