Finally sprayed some primer on my patches.

This heat is not conducive to either bondo work or painting...was able to spread one pass of thin bondo each morning before work for the last couple of weeks. Sanded after work, then repeat the next morning. Last Saturday I hung a tarp up between my truck and the garage and got some shade, that gave me another hour of working time before it was too hot to for the bondo. Above about 80 deg. F. and the stuff would set up in about 10 seconds. 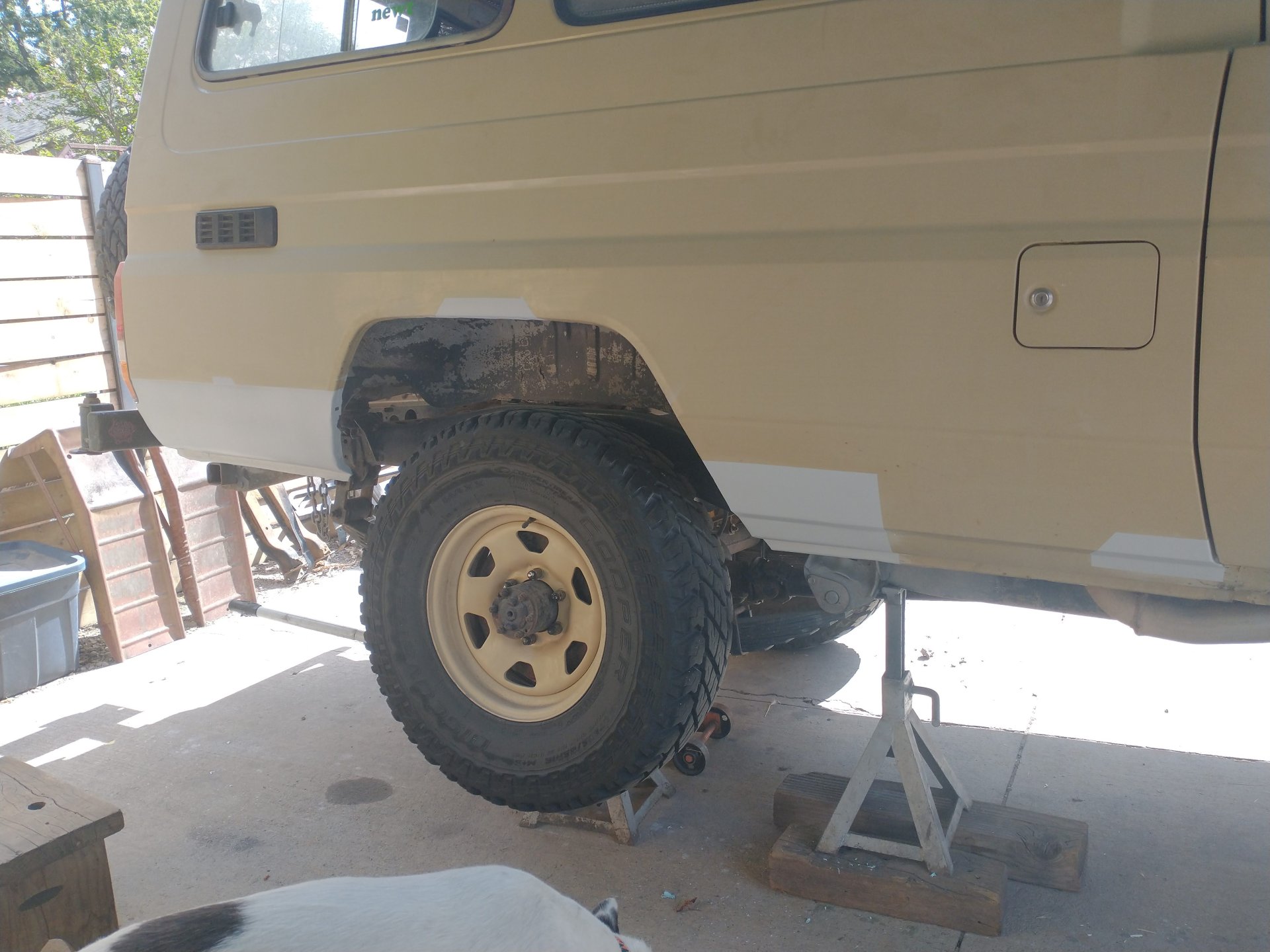 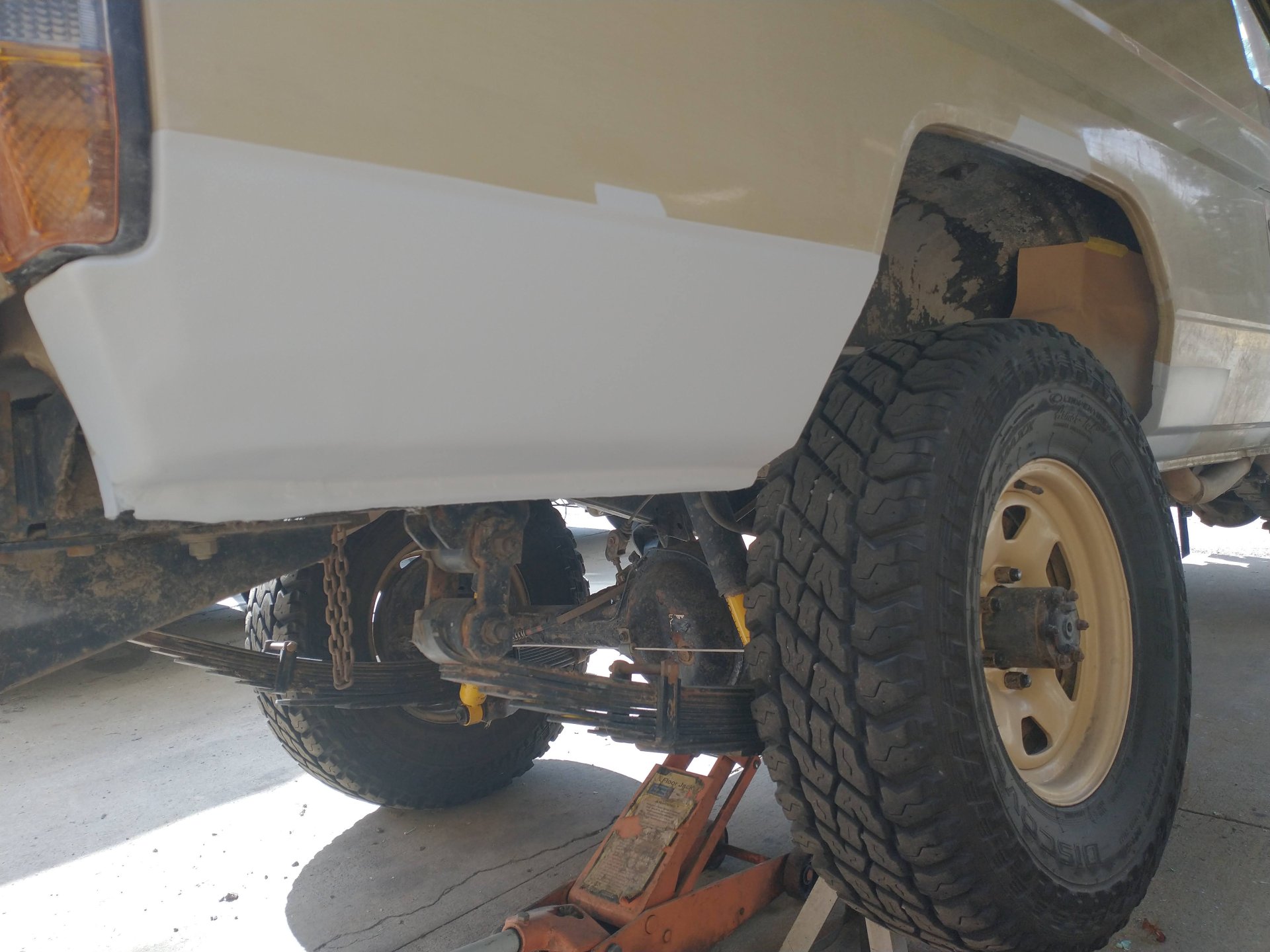 Didn't do as good a job on this side. I used the wrong tip on the borrowed spray gun and didn't have any thinner for the paint. It looks like I spackled/spray textured it if you look close. I'll be sanding and re-doing it, but wanted to get a coat on before this weekend as we're going camping the next couple weekends and I want to take this. 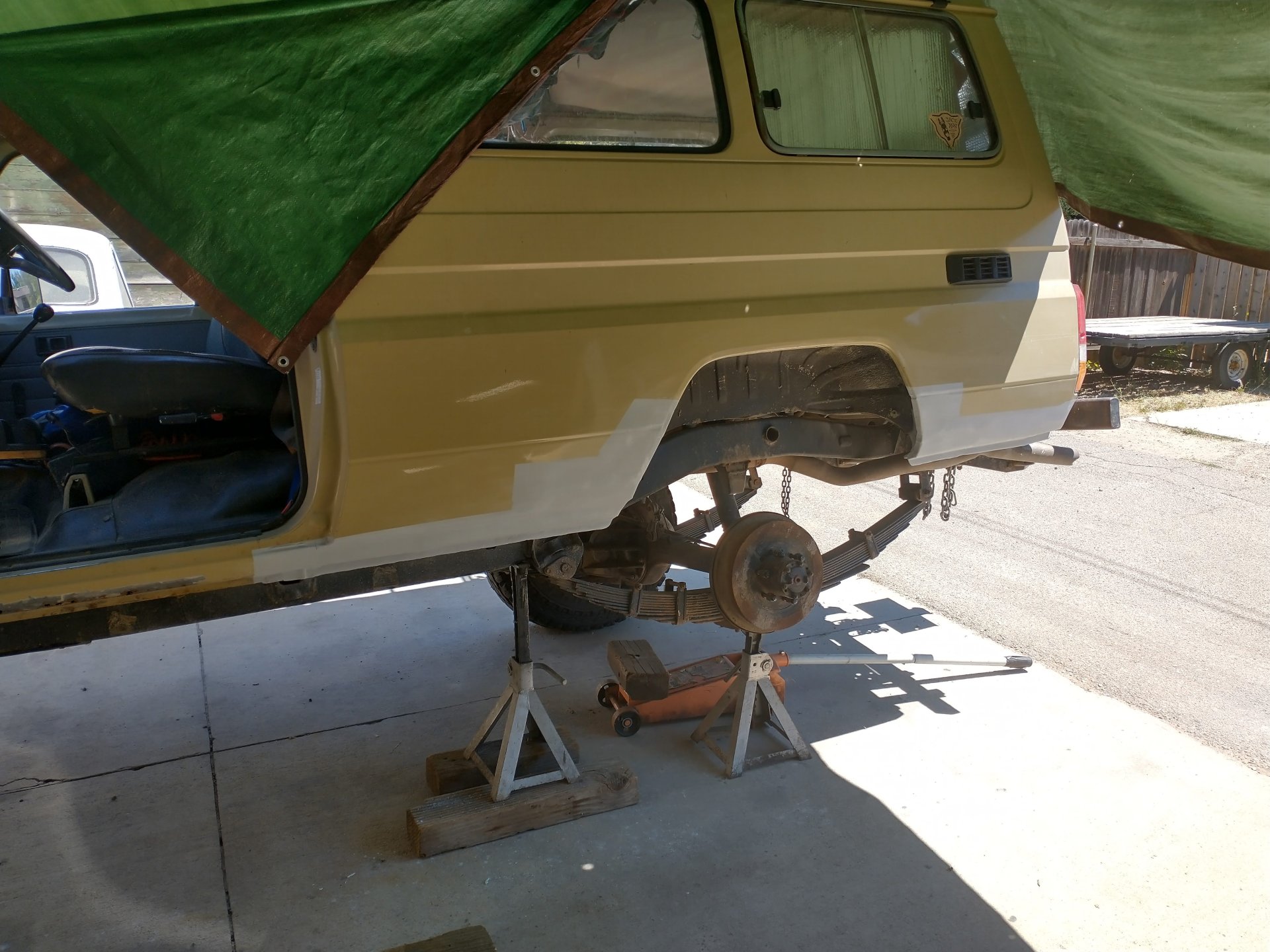 Pulled my injectors last night. Sending them off for service today. Used a two-jaw puller and a small section of 1/2x1/2 angle to get them out. Last one, closest tot he fire wall, was a bugger and I couldn't get the puller to work, so resorted to using a cats-paw nail puller and pried it out. 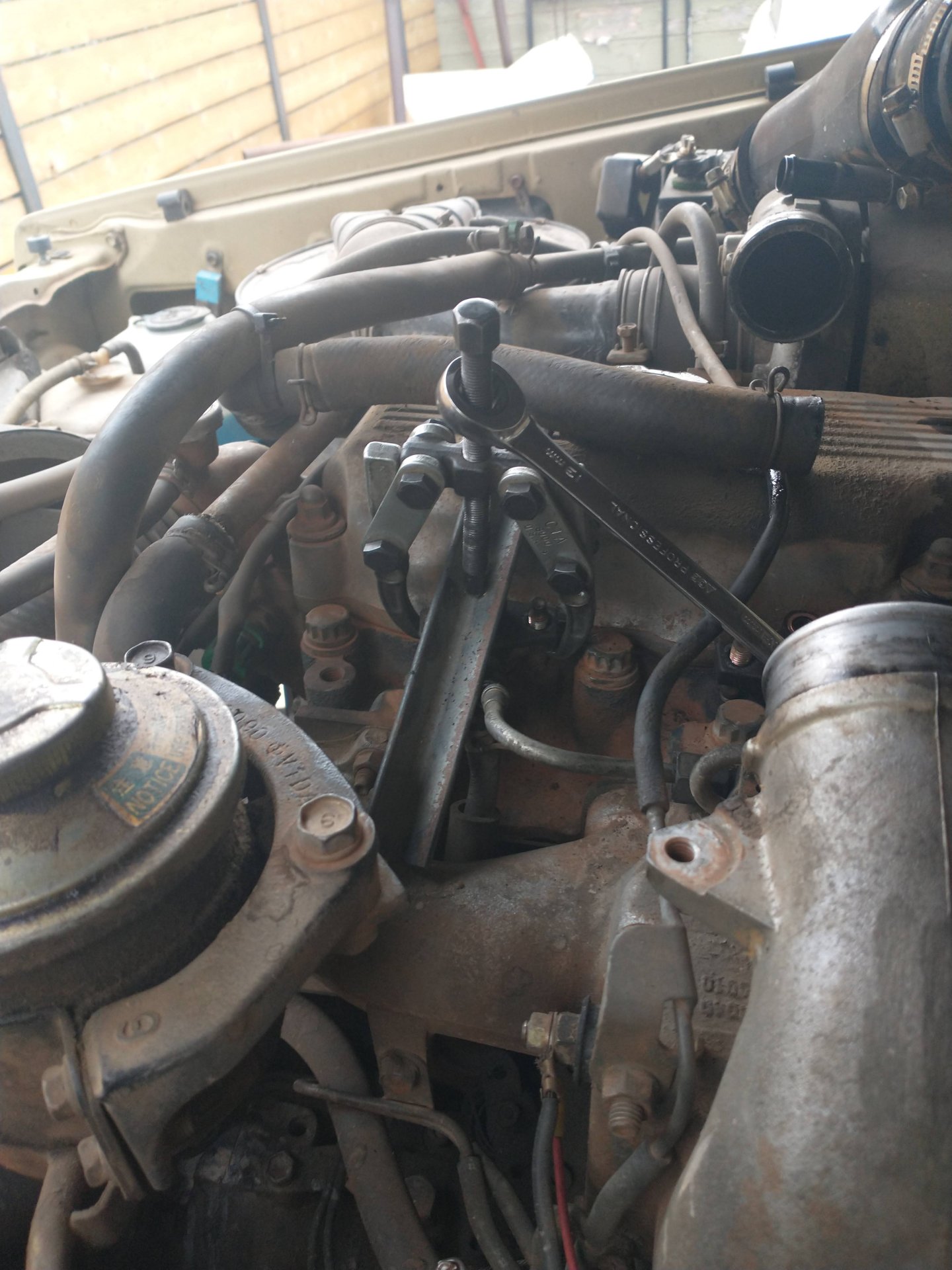 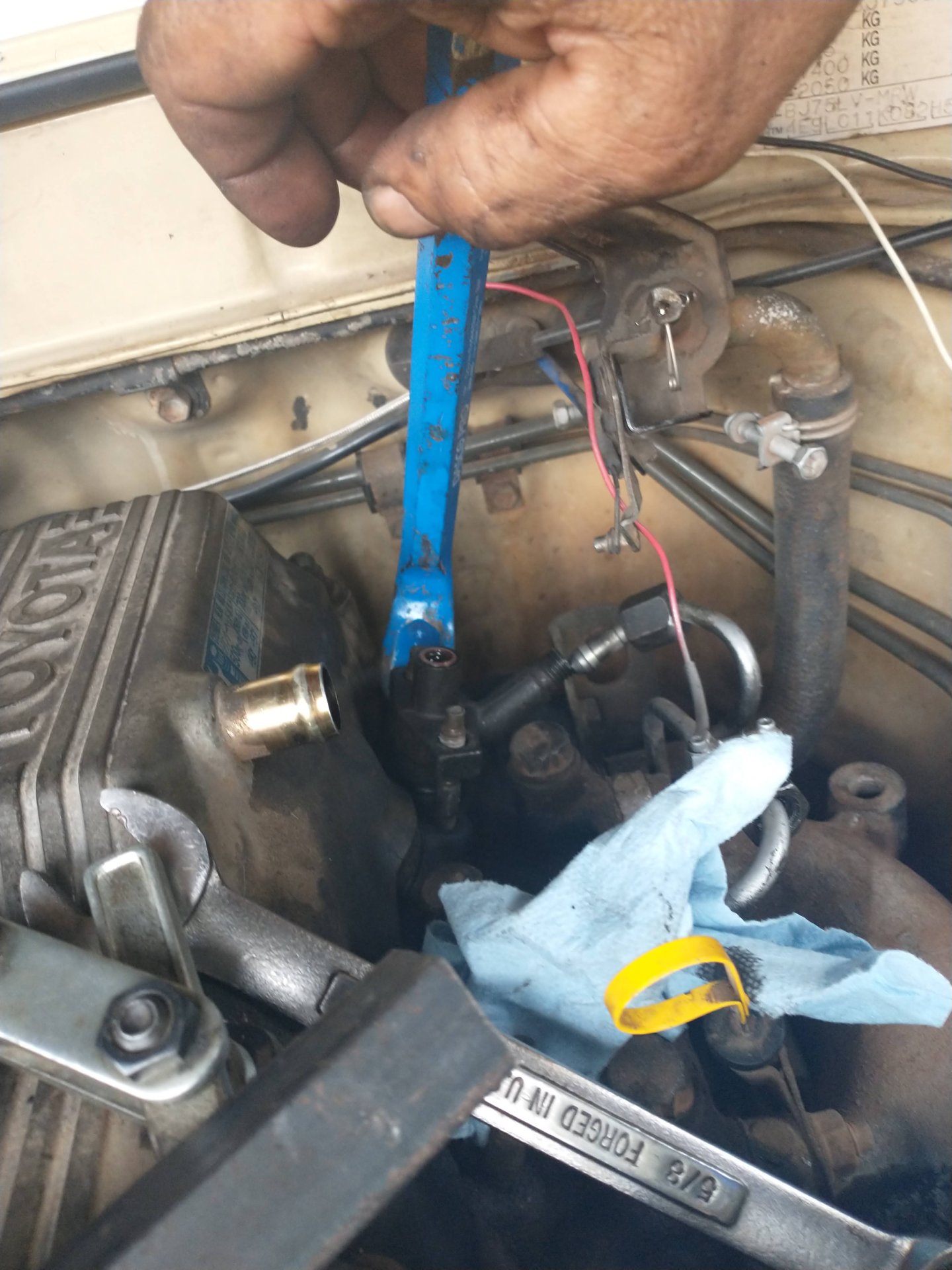 Just a fair (fare?) warning... those of us that live in BC understand that it secretly mean Bring Cash!

That said, there are some great smaller shops that do great work and are still reasonable... Hopefully this is one of them!!
2002 HZJ76 Build Thread

Shipping was stupid ($90 usd), I thought I messed something up, but the FedEx office said, nope, actually pretty cheap compared to most international shipments...

Cut out the rusty section of my driver's rocker last week. 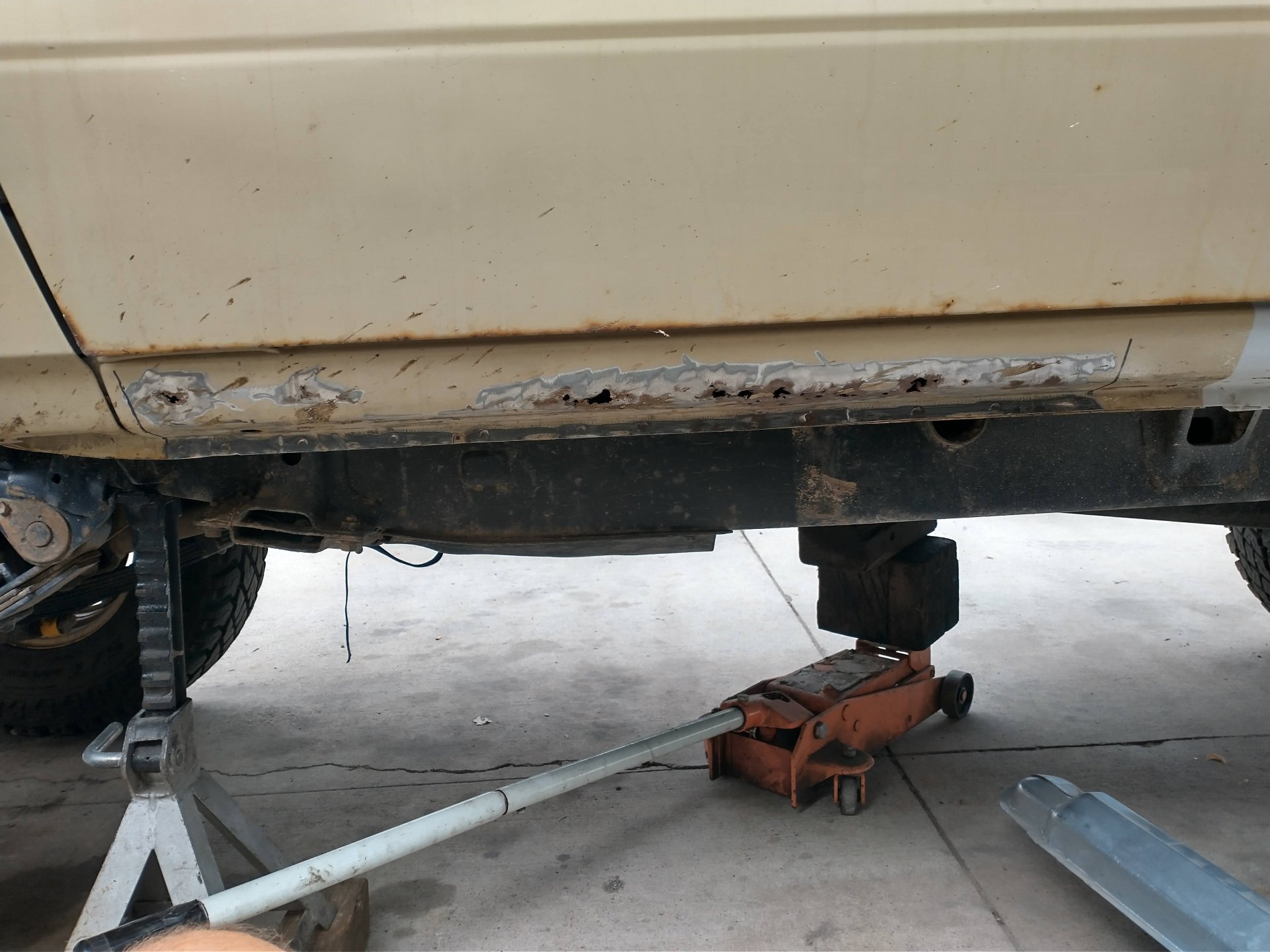 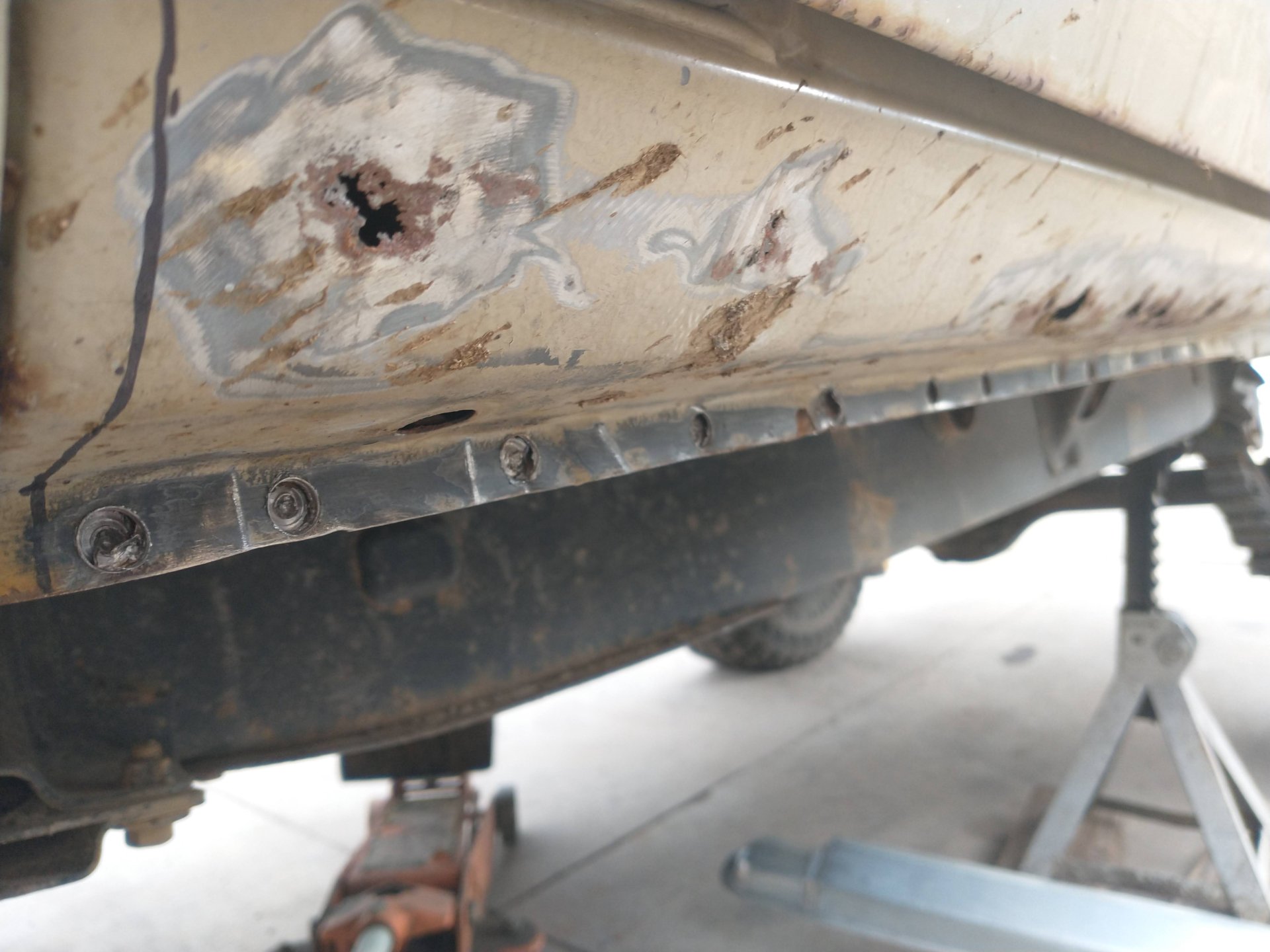 Amazingly, the inner panel wasn't completely gone like the other parts I cut into this summer. 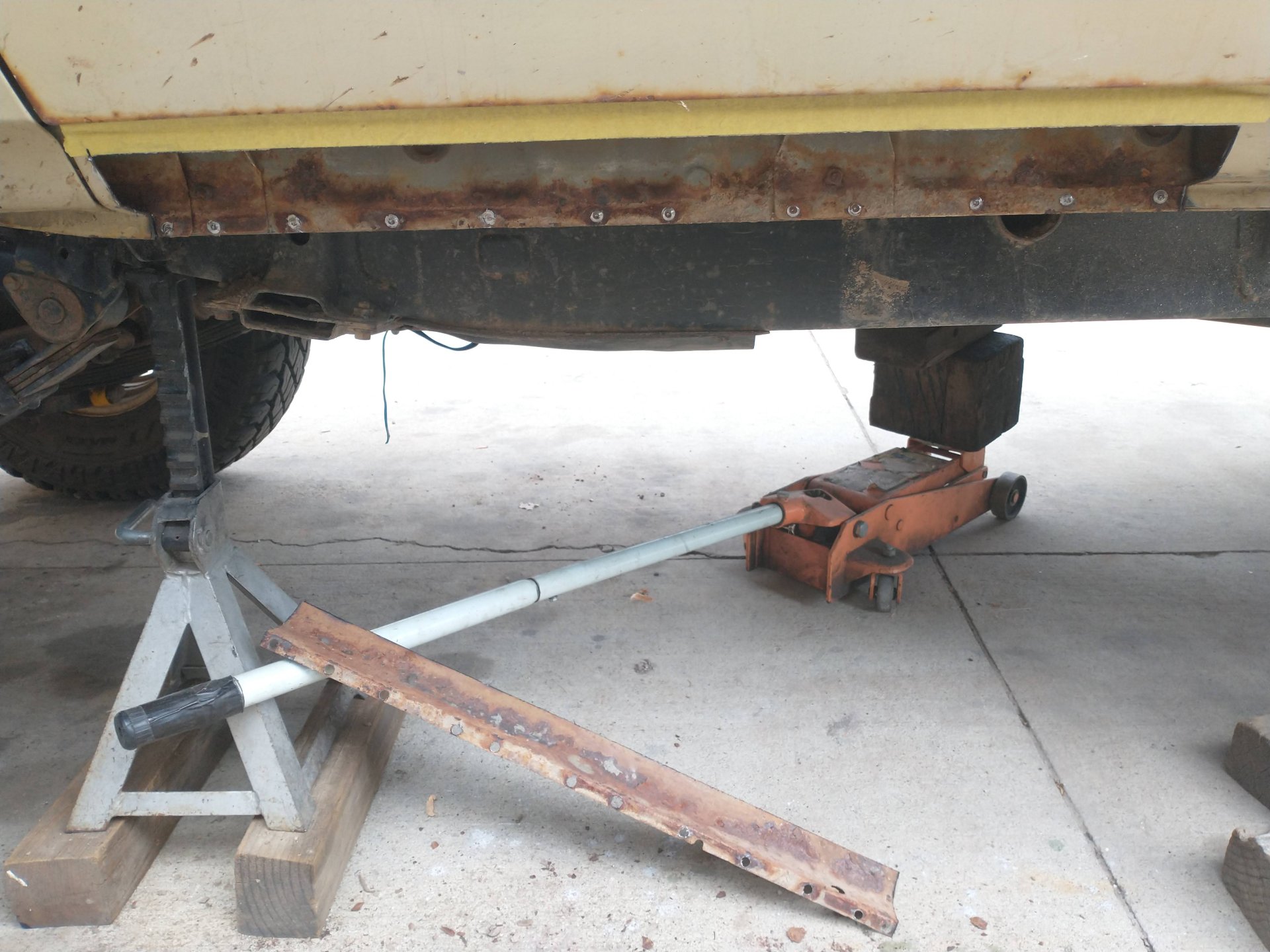 Treated the inner panel with Naval Jelly, sanded, blasted and painted with POR-15, no pics of that.

Used the old piece and sectioned the new rocker and tacked it in...didn't realize that it was galvanized, so there was a bit of spattering and my welds look like s***, but it'll hold. 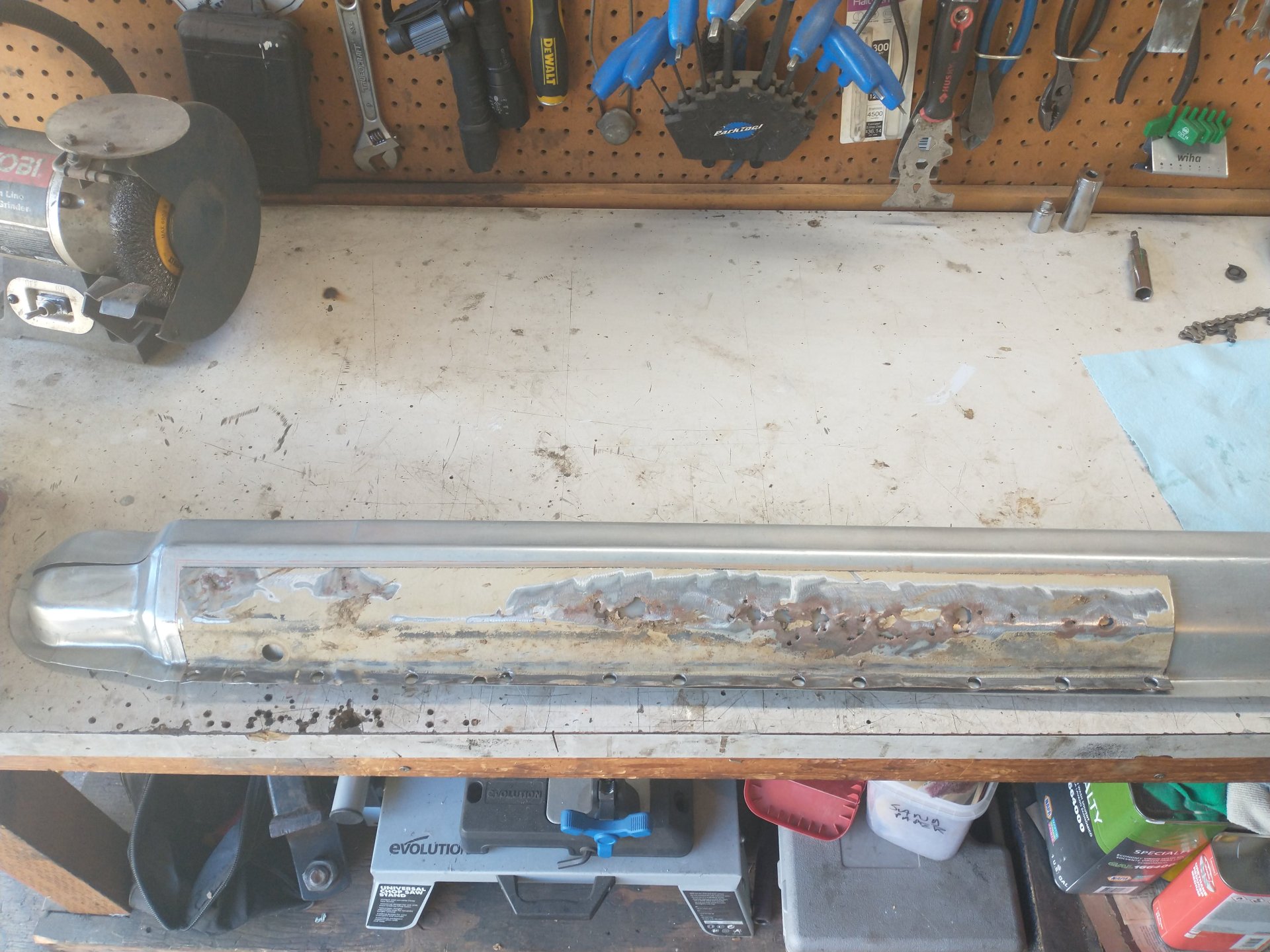 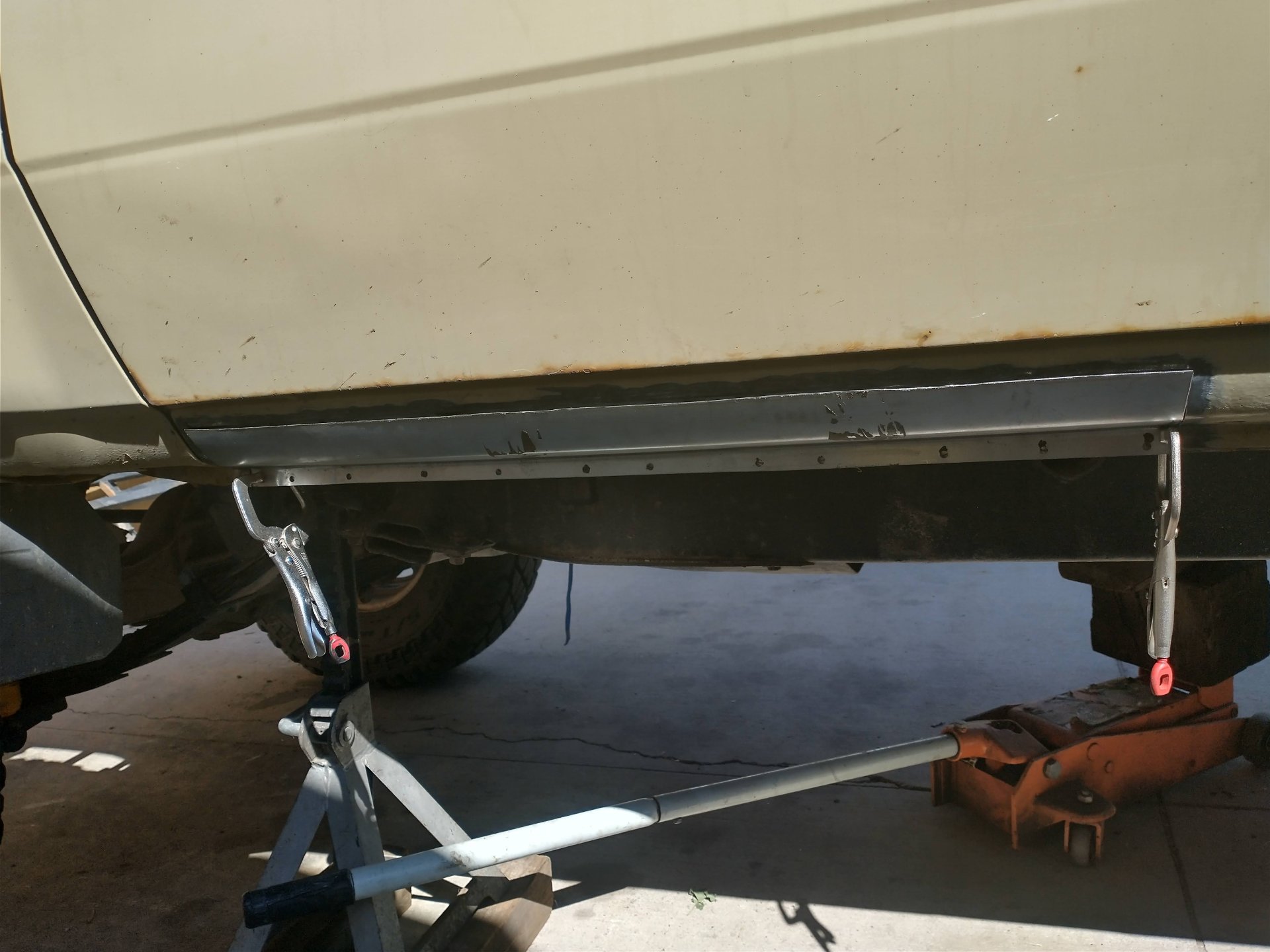 This was the side that I spray-textured with the two-part epoxy before I figured out the right tip to use and got some thinner. So, I sanded the sections that I'd primed before and spent an hour masking, luckily my neighbors read the Times and have a recycle bin fold of masking material... 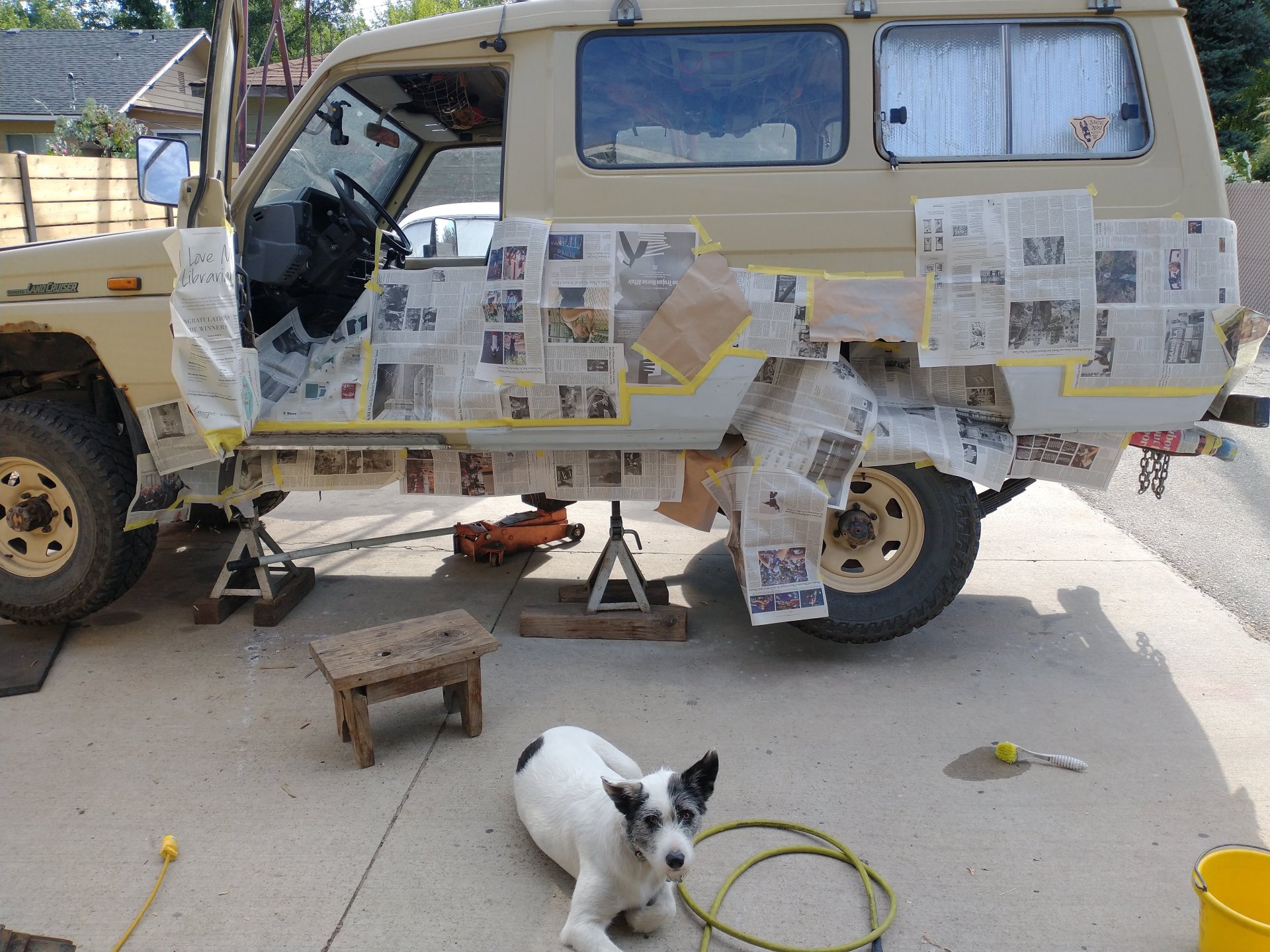 Primed the bare metal, re-primed my previous work, then did a skim-coat of bondo and primed again. 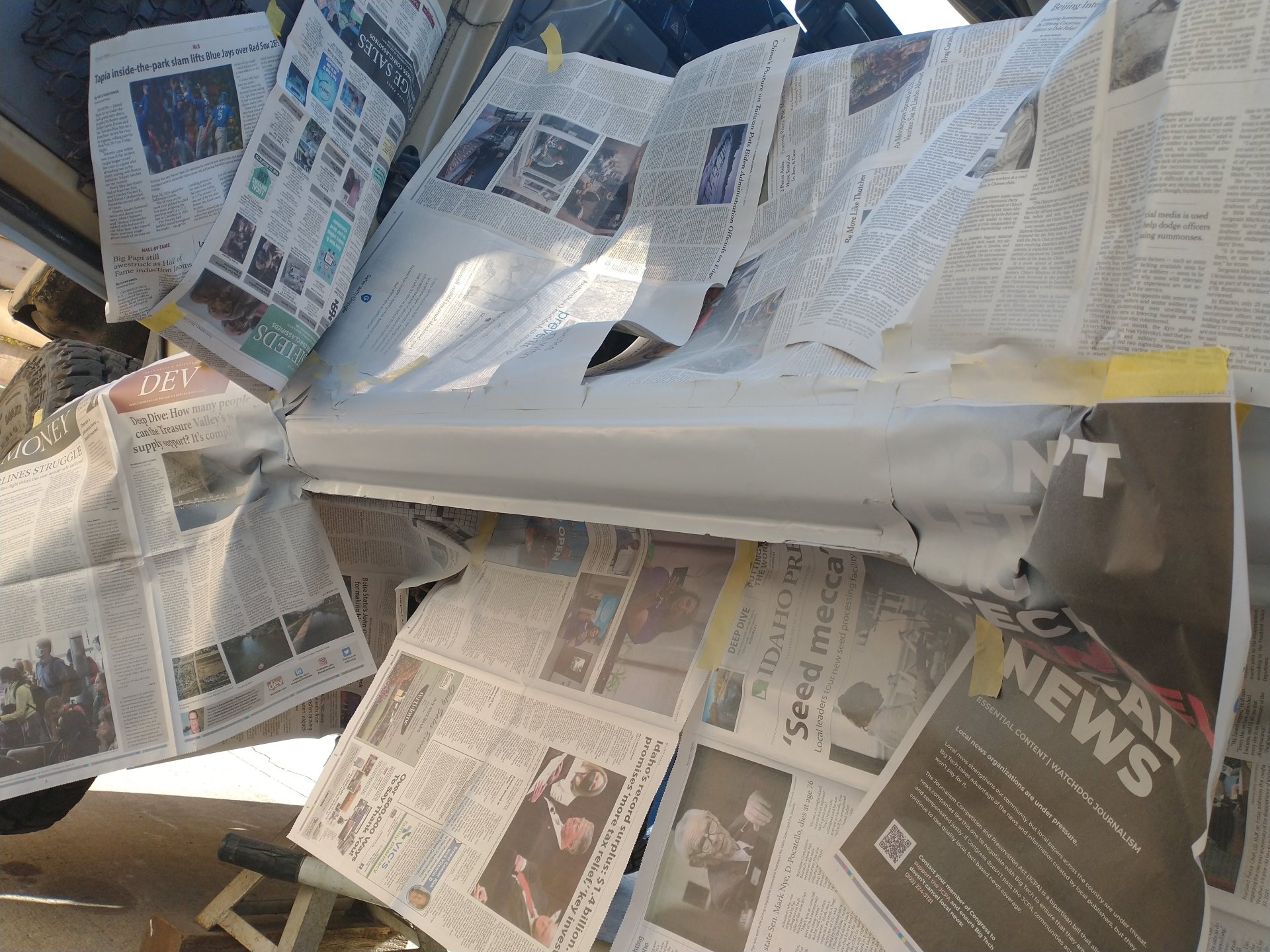 I need to do a better job of masking the frame...the gun blows the paper off. 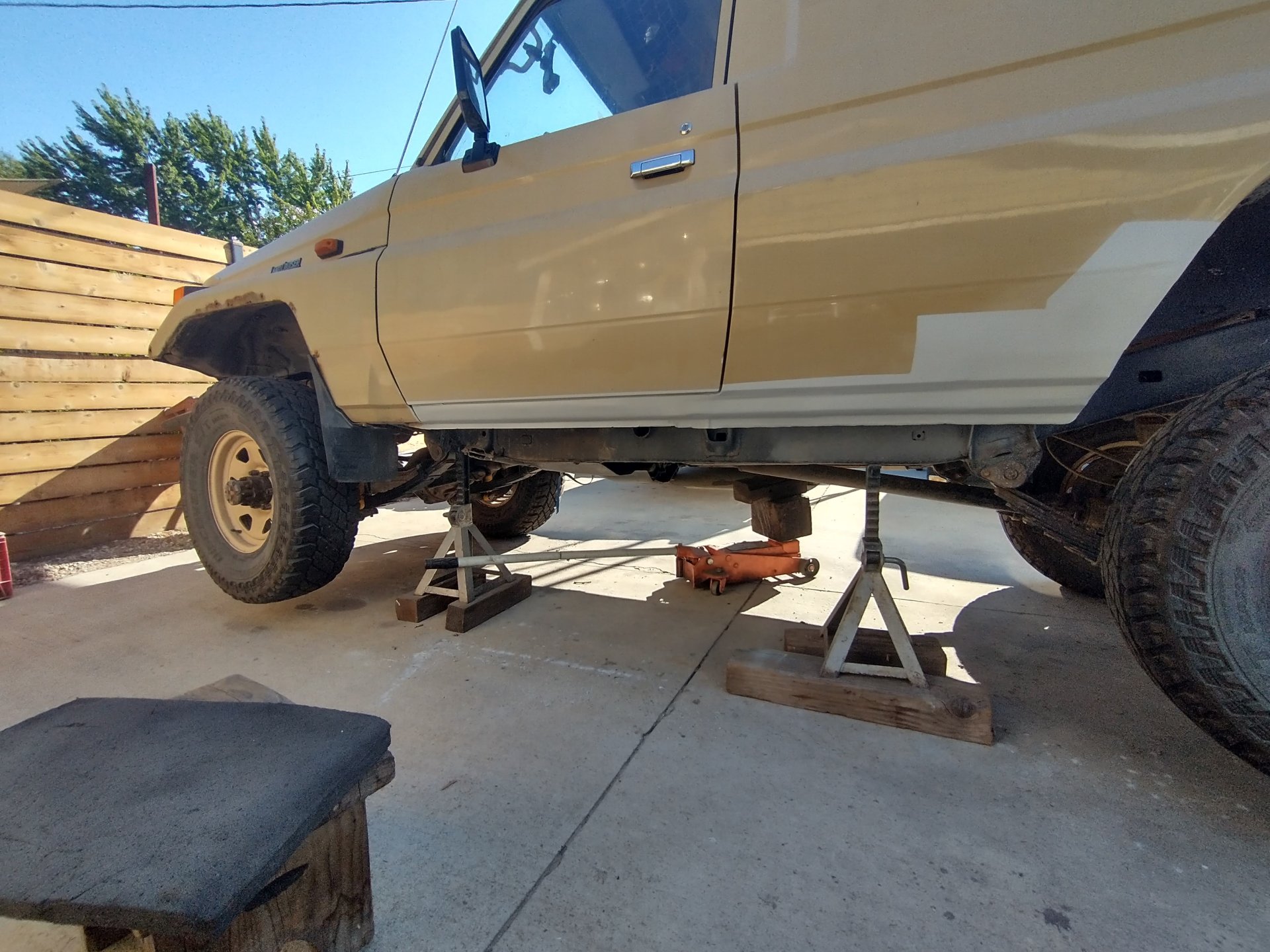 Ordered some nozzle seats and gaskets, along with crush washers, awaiting my rebuilt nozzles to get back from their BC spa retreat. Also got a new hood prop-rod grommet.

Old one was in two pieces. 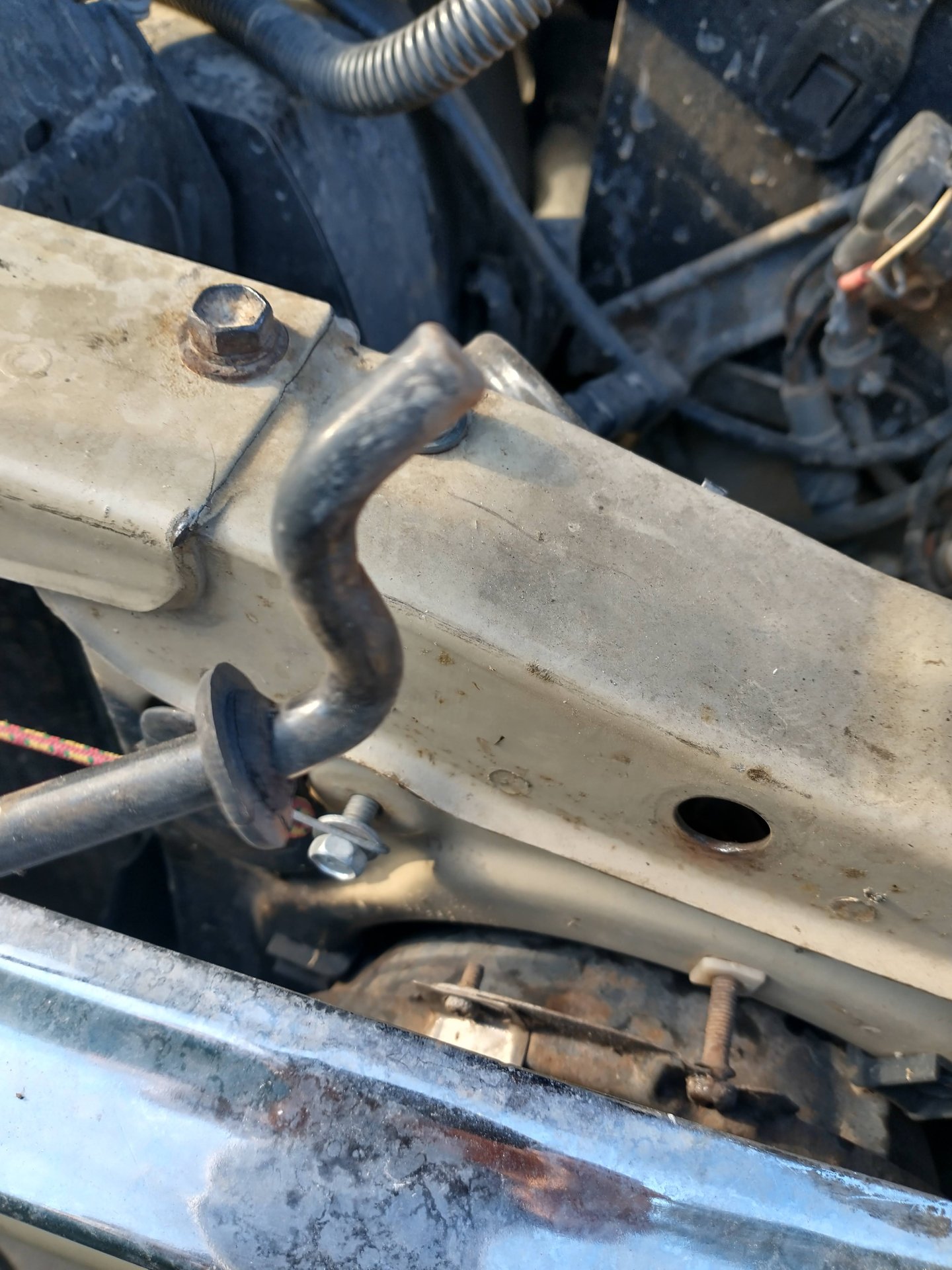 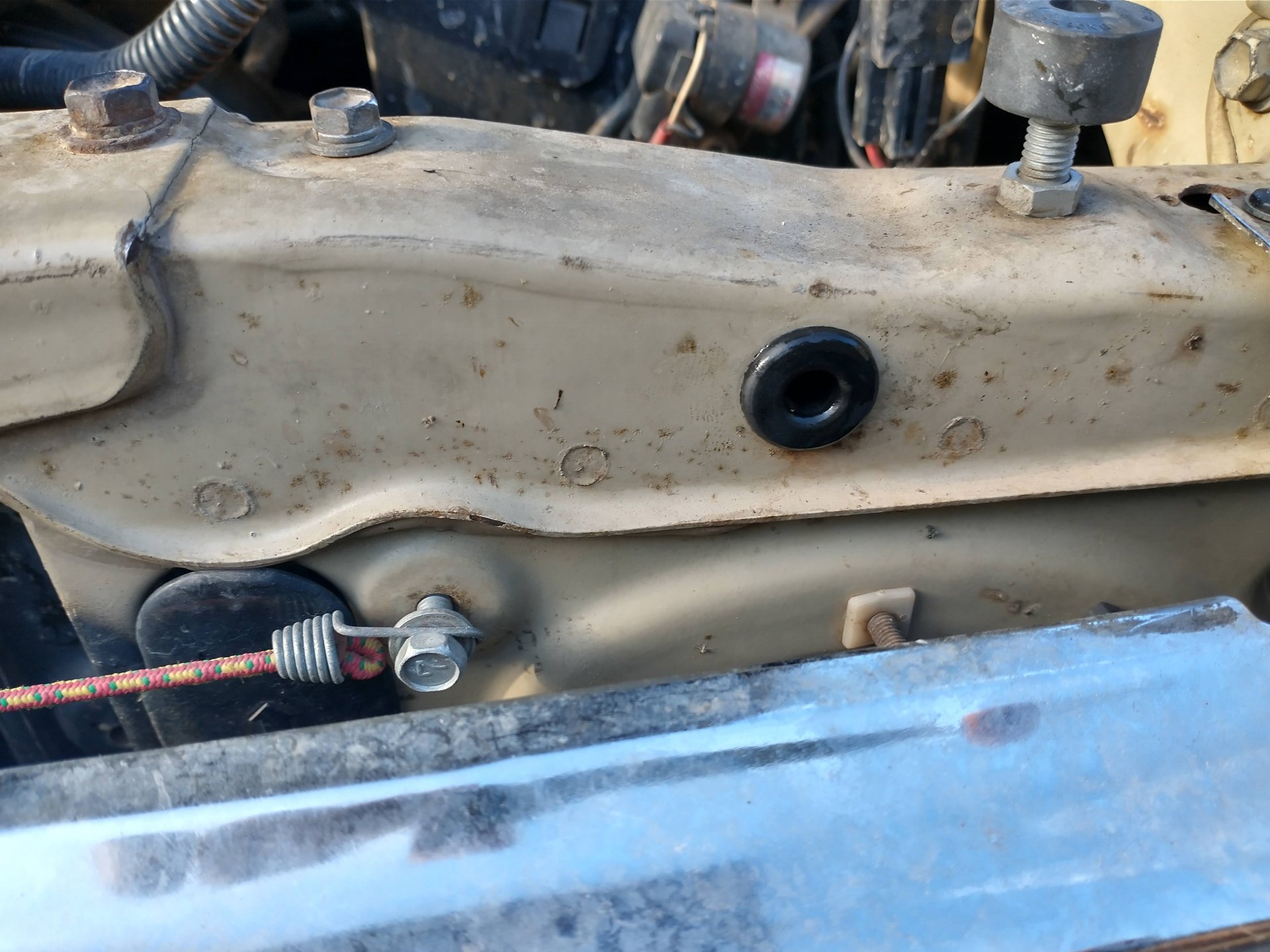 Got my injectors back. New 1HD-T nozzles were cheaper than the 14B-T and had the same spray angle, one more hole, smaller holes, should have better atomization. 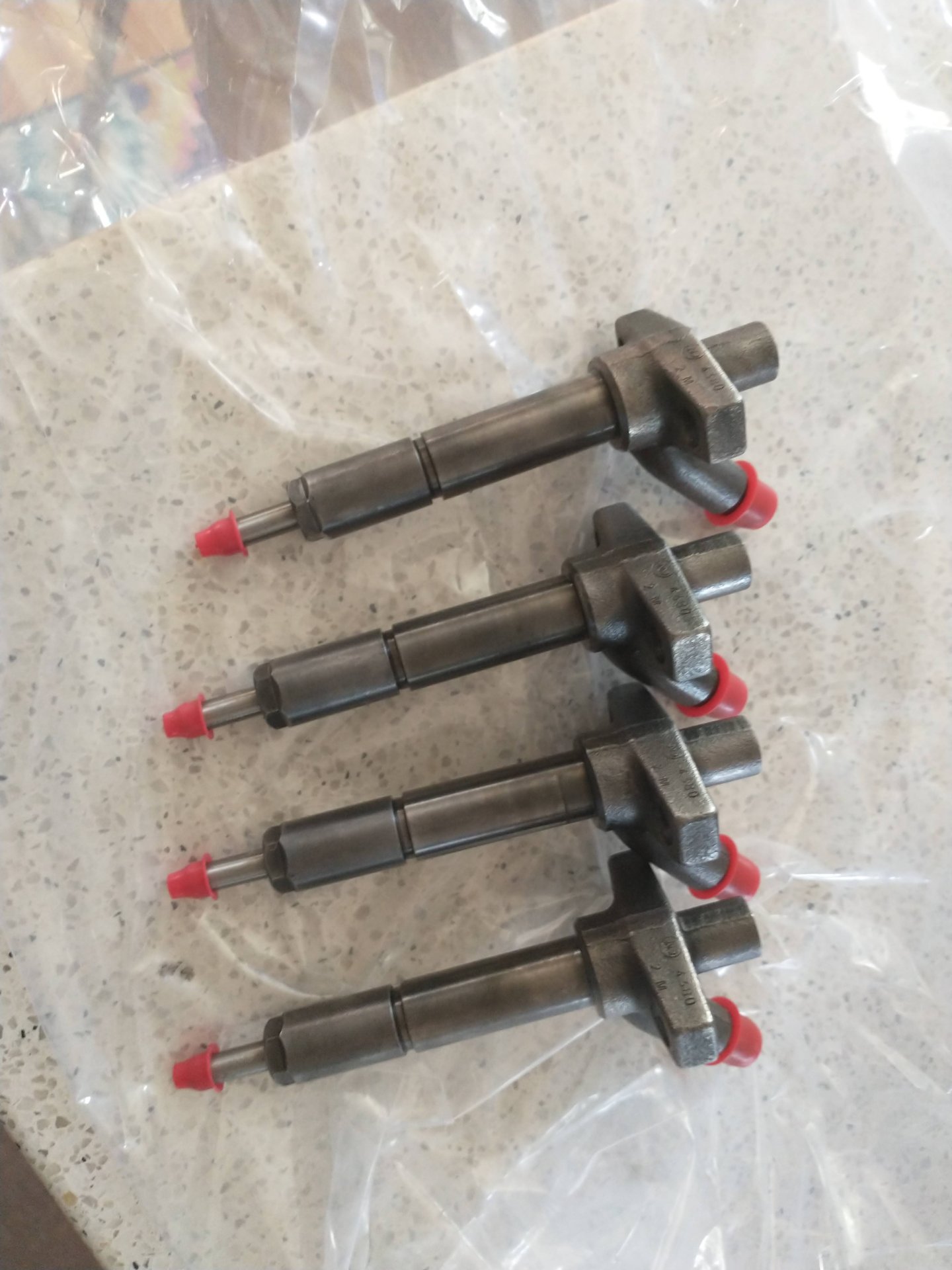 Decided to finally change out my valve guide seals as I'd ordered them a while back and had most the stuff off the engine to get the valve cover off. Used amaurer's post from 2008 for reference. I'd loaned my compression adapter out last year and after many months of badgering the person I loaned it to, it finally came back to me a few weeks ago. Process went fairly smooth, once I figured out the valve spring compression tool. 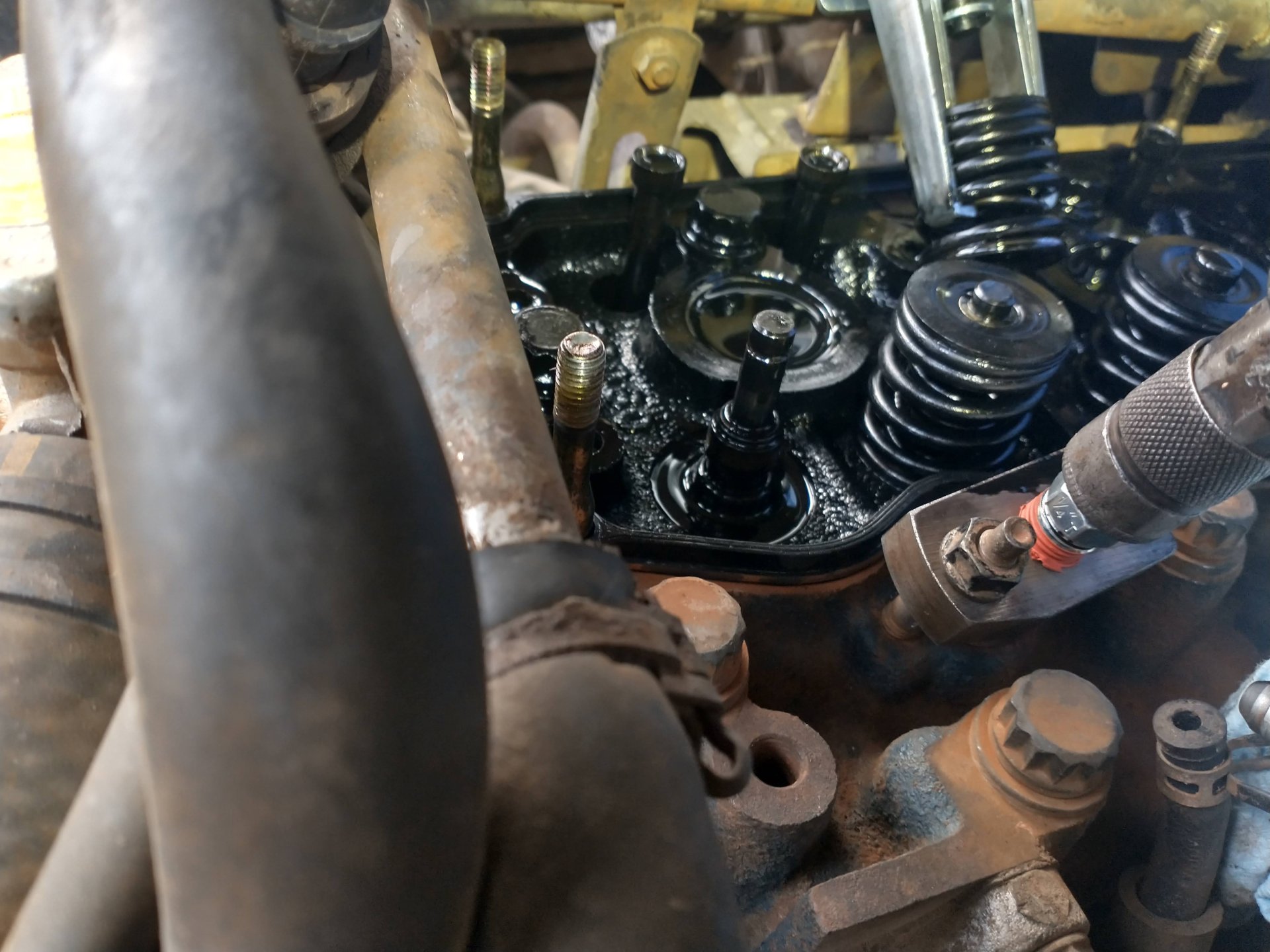 New Seal part number, a couple of the old seals were 'glued' to the head, and all were hard as a rock. Hope this helps my blue smoke on descending and decelerating under compression. 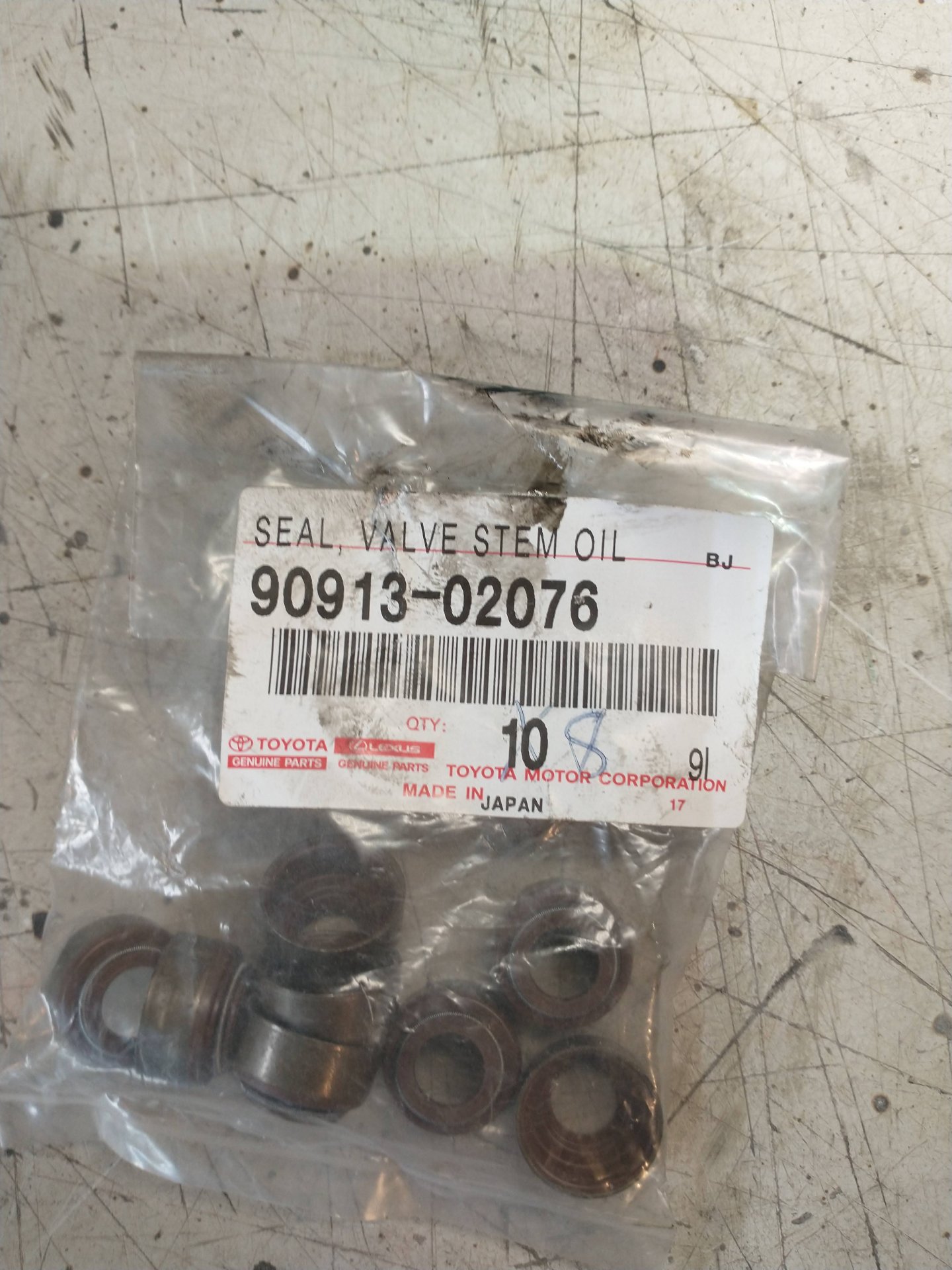 Last one, whole process, including valve adjustment, only took a couple hours and part of that was installing the rebuilt injectors, bleeding lines, getting engine up to temp, and valve adjustment. 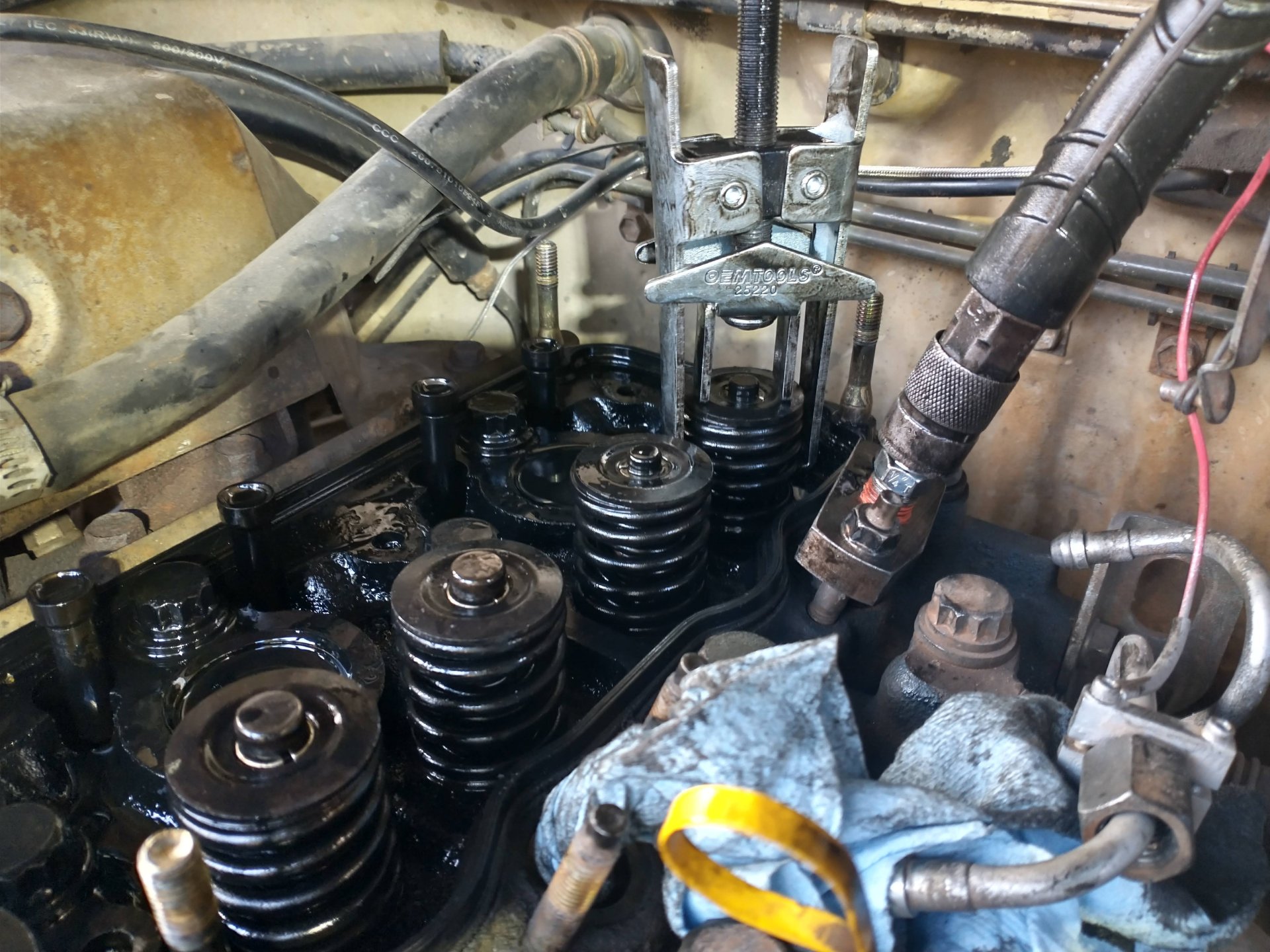 Looks like I never documented the last (for now) of my rust repair and the painting of all my patches...

Passenger's side door was where I drew the line. 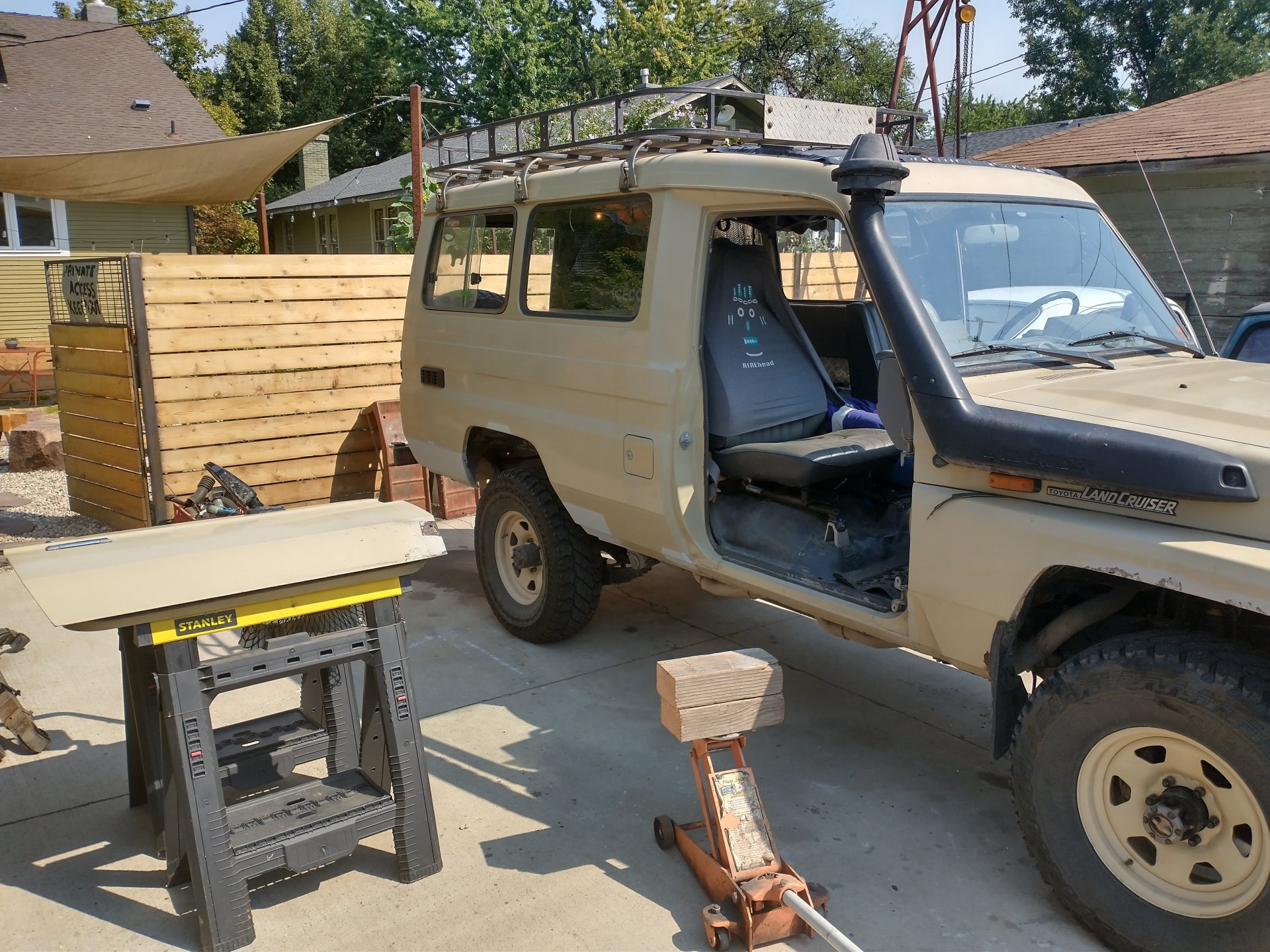 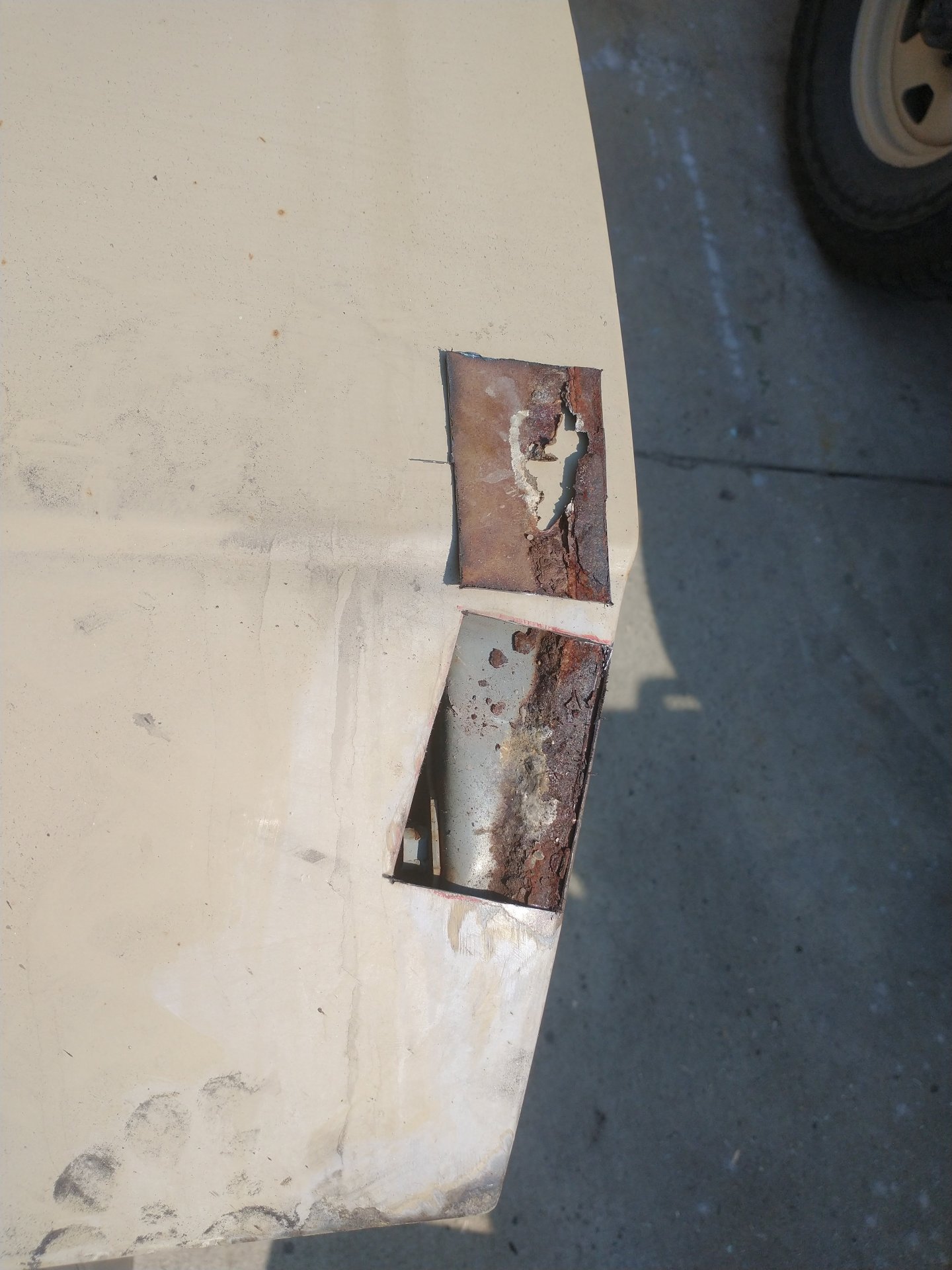 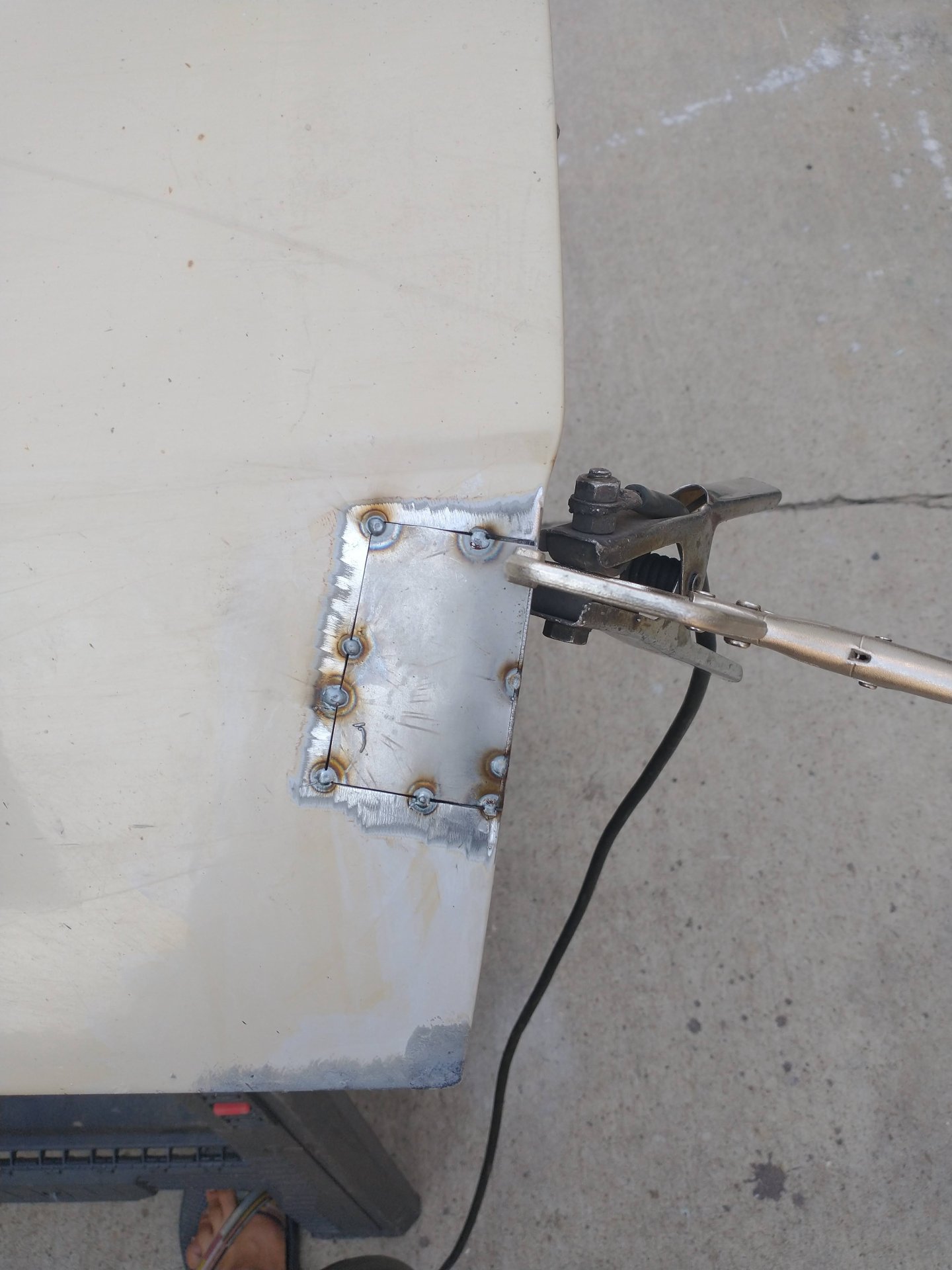 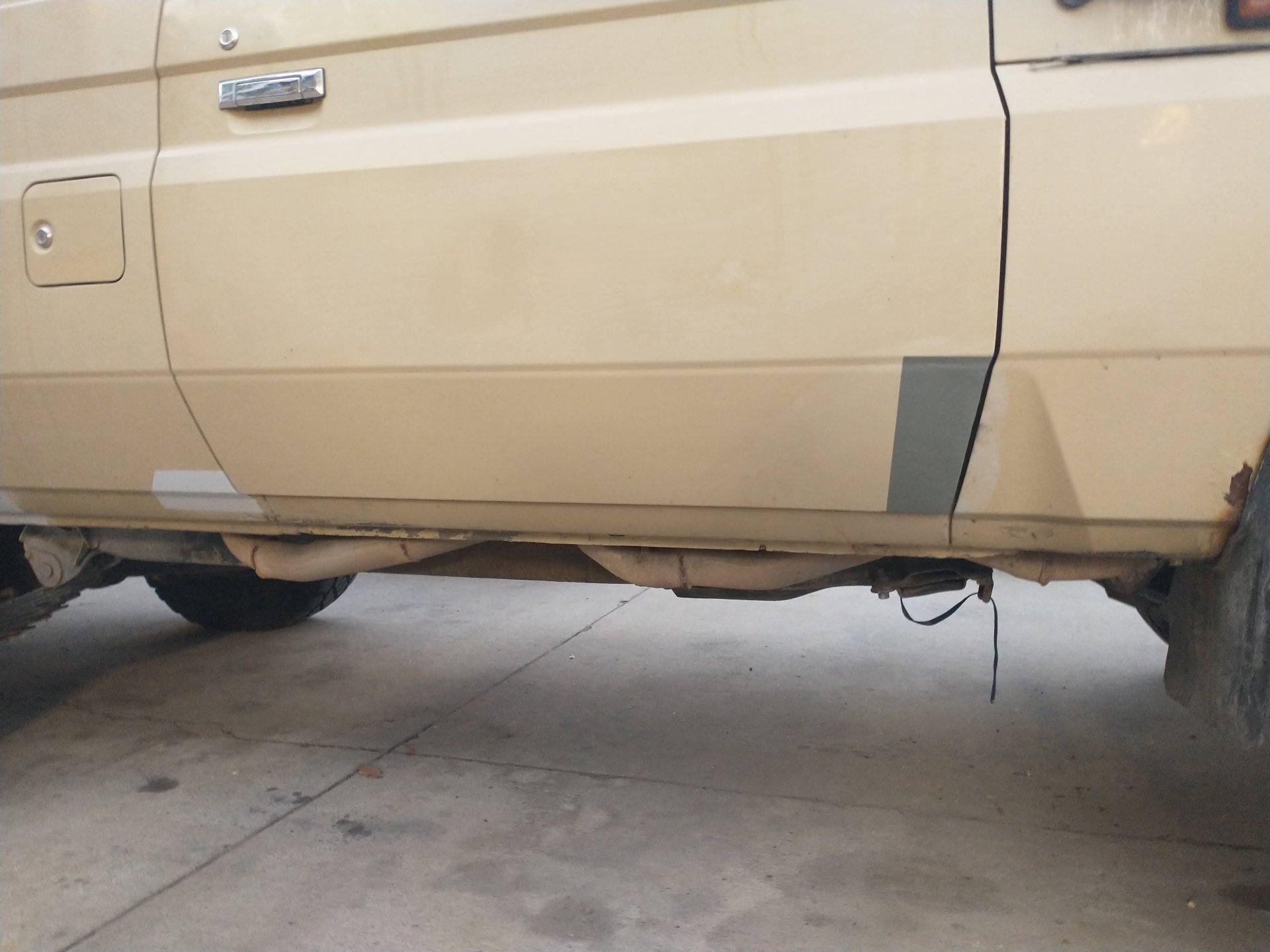 Luckily my neighbors get about 3-papers a day, and I can scavenger masking material out of their recycling...masking is s a PIA, I still managed to paint one of my leaf springs. 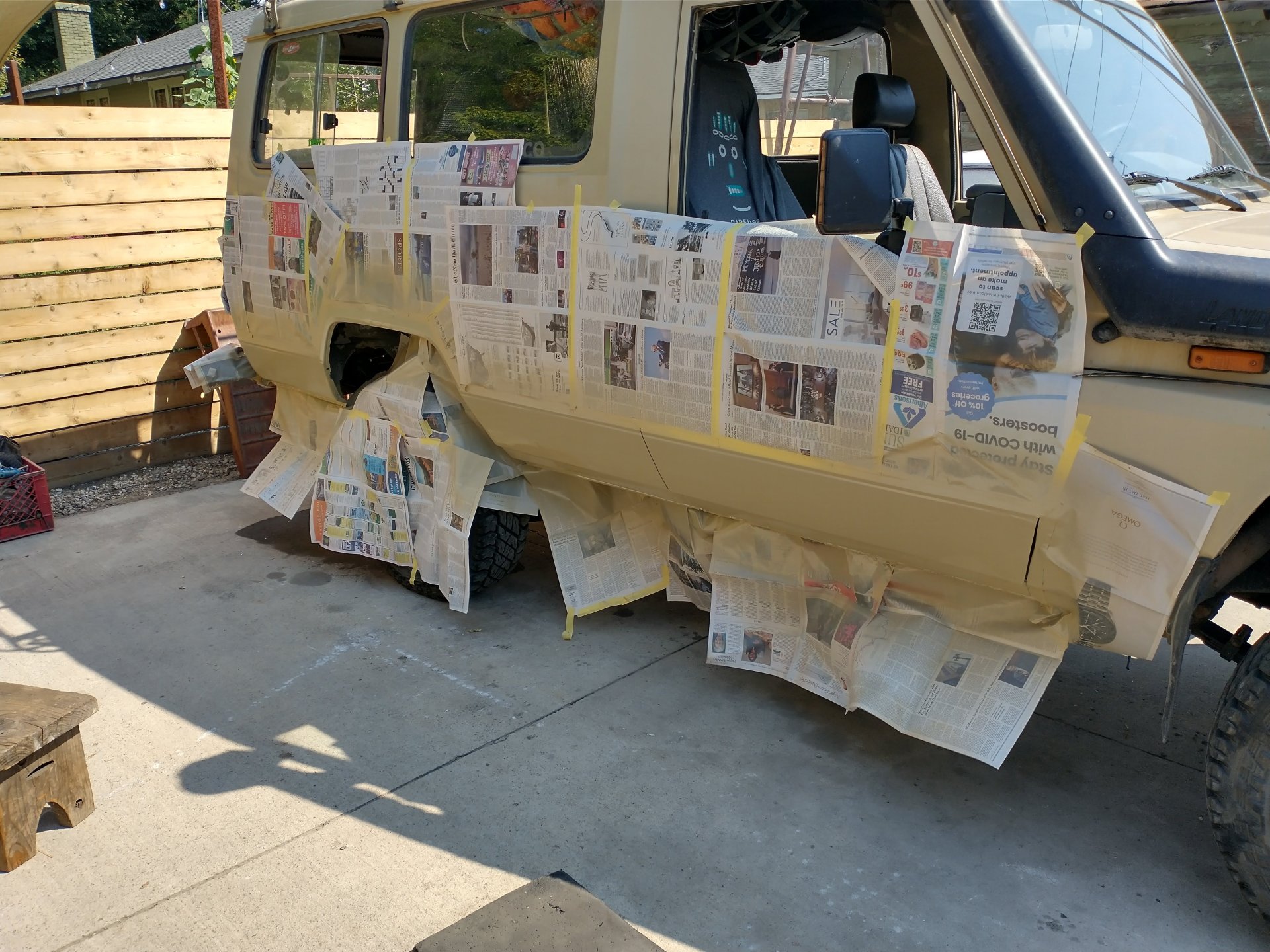 Took my fuel door and the paint code, 4E9, to National Coatings & Supplies and had them mix up a quart of single stage urathane paint. Match was spot on. 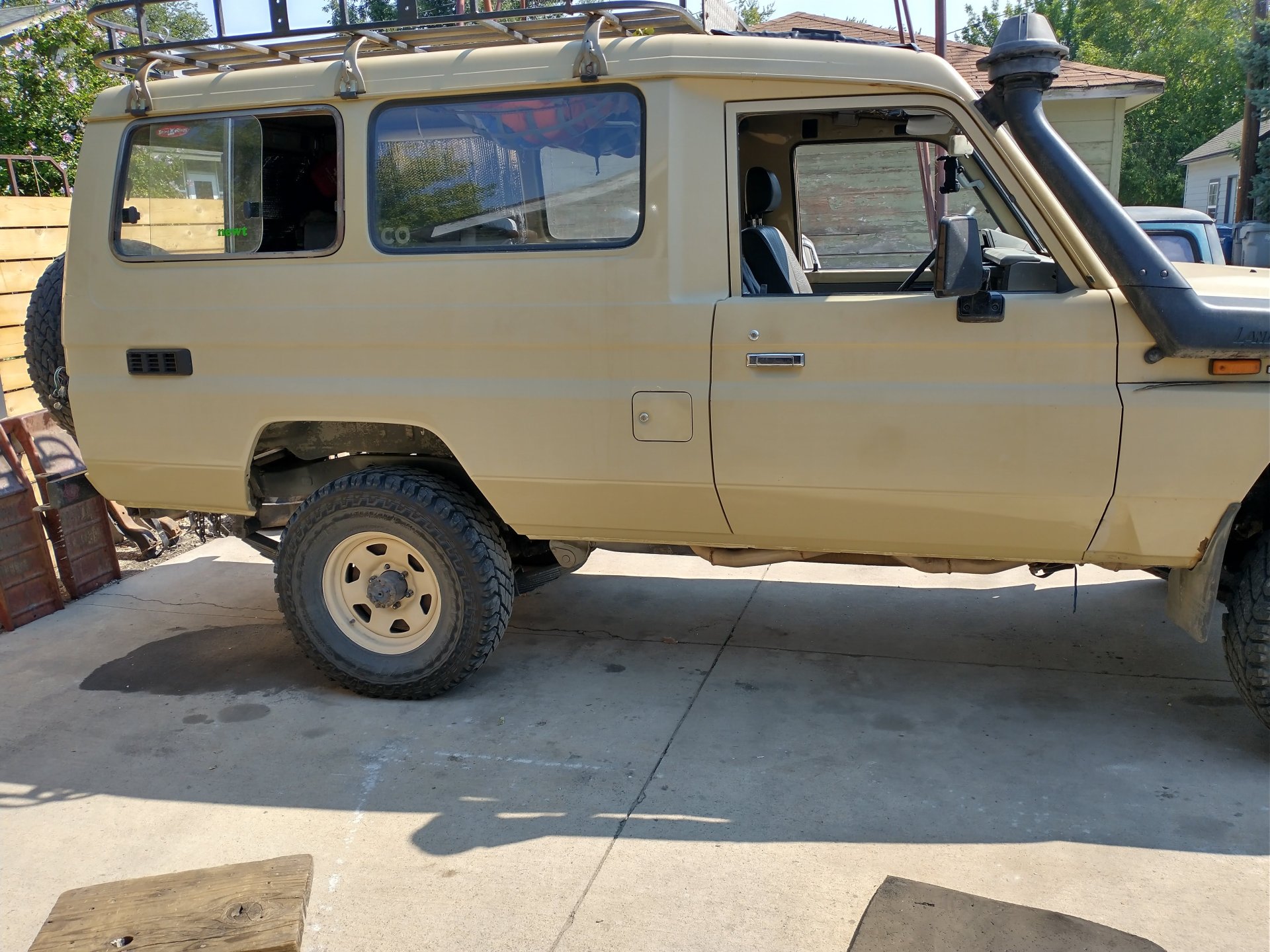 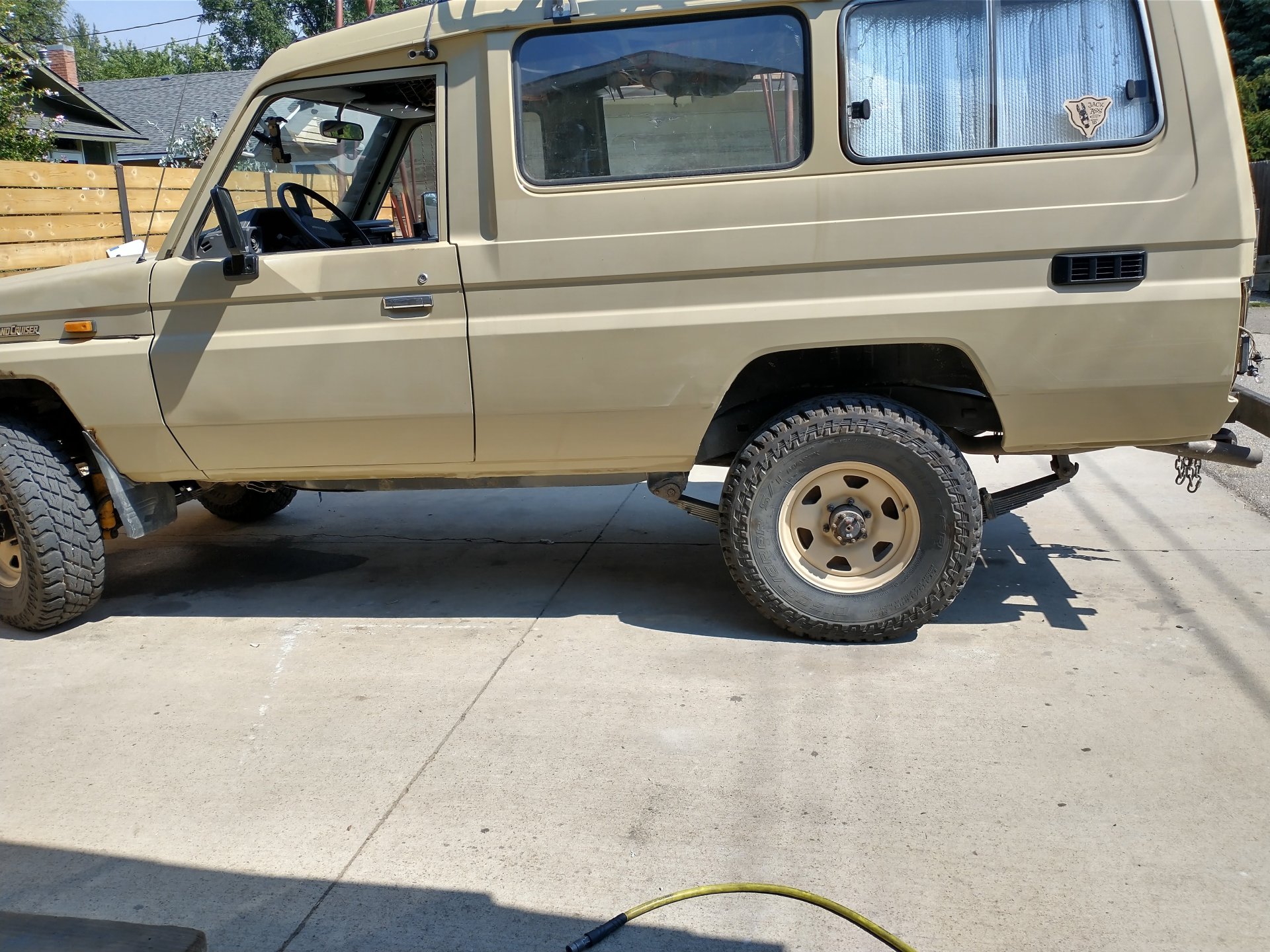 After my injectors were replaced, truck is much quieter and smoother, but seems a bit lacking in power. Advice from the shop that did the injectors, was to check my timing.

This engine is a PIA to access the injection pump. I found a post and video here on mud and asked the local cruiser group if anyone had a VE pump timing tool and Ian (SNLC) offered me his.

Had to remove my external coolant heater lines and fuel supply line to get the tool installed. I just clamped off the lines with vice grips so I didn't lose any coolant or much fuel.

Also figured out if I got up on the radiator to turn the crank, I could see the gage dial at the same time. Initial timing check, the pump was at .94, a bit retarded. 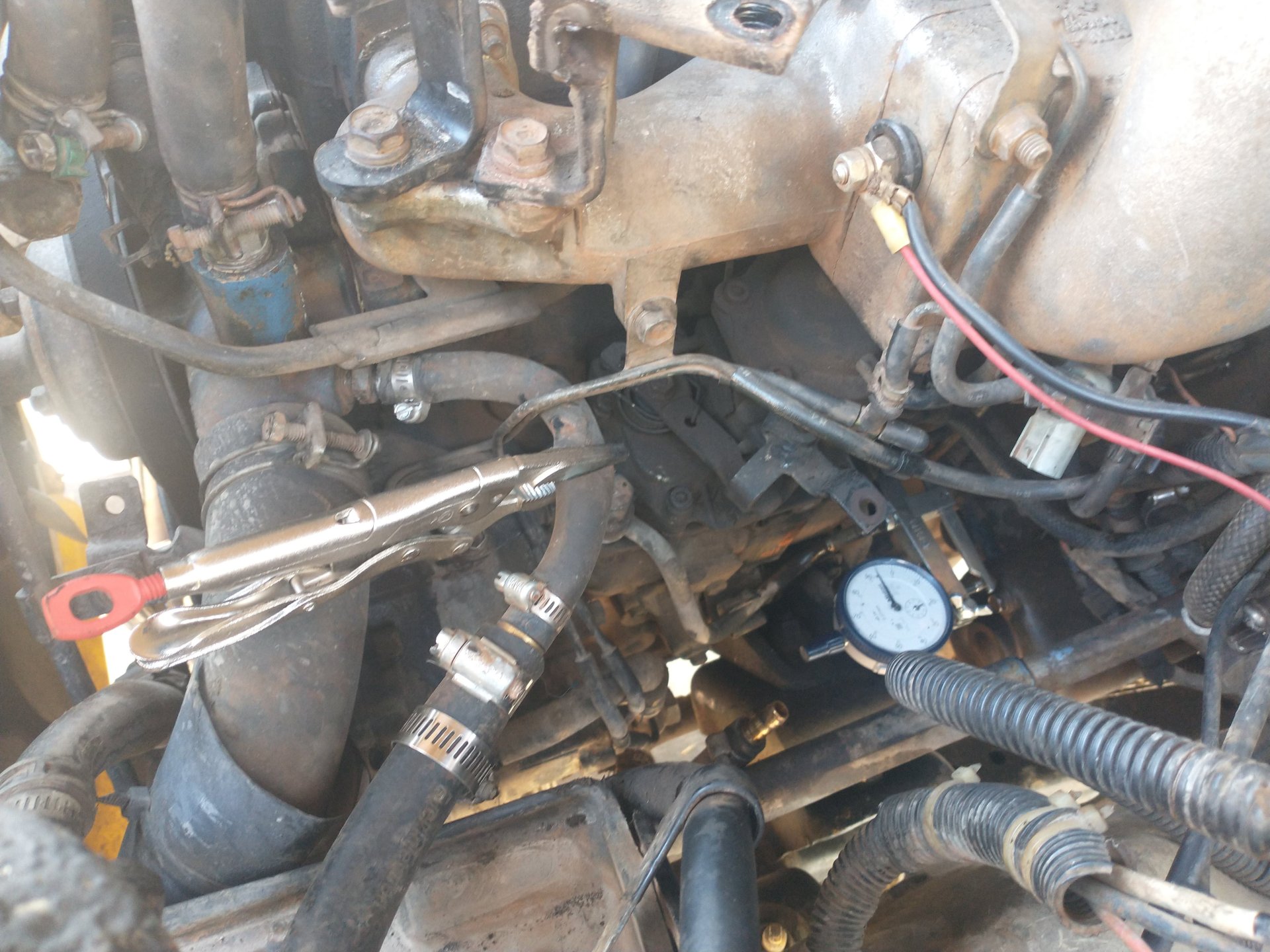 Ended up have to modify a 12 mm wrench to get to the one bolt, Ian loaned me a SST wrench that works on a 1HD-T pump, but it was too long to fit in my engine bay. 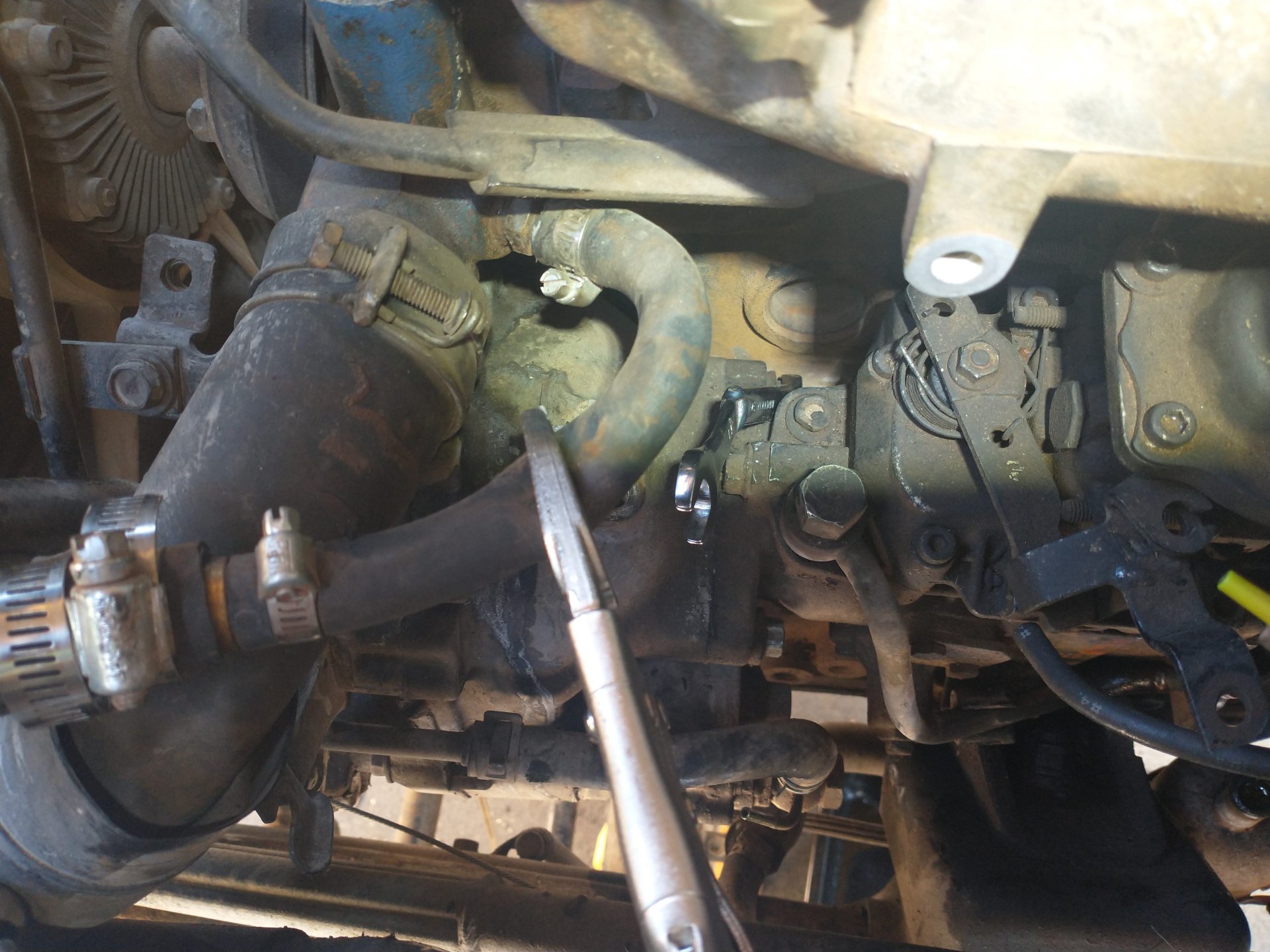 I pulled my power steering reservoir off it's mount, removed my battery, and battery tray (loosened up and slid it forward) and the hardline vacuum mess that are mostly capped off (ended up removing these lines permanently) and was able to access the front bolts holding the pump. Was able to get to the two rear bolts (using an inspection mirror to find one) with just an extension. The second rear bolt is directly under the timing port. Had to remove the timing tool to get at it. Started to remove injection lines, but noticed the pump would move with them on, so I left them tight. Not sure how in the hell I was going to get them off anyway.

Installed the timing tool again and advanced the pump to 1.2

Returned Ian's tool and a six pack and scavenged a piece of 4mm vacuum line (90999-92004 for future reference) and removed/rerouted some vacuum lines as most were capped and I don't even know what this one device is for, maybe something to do with the power steering and/or A/C? 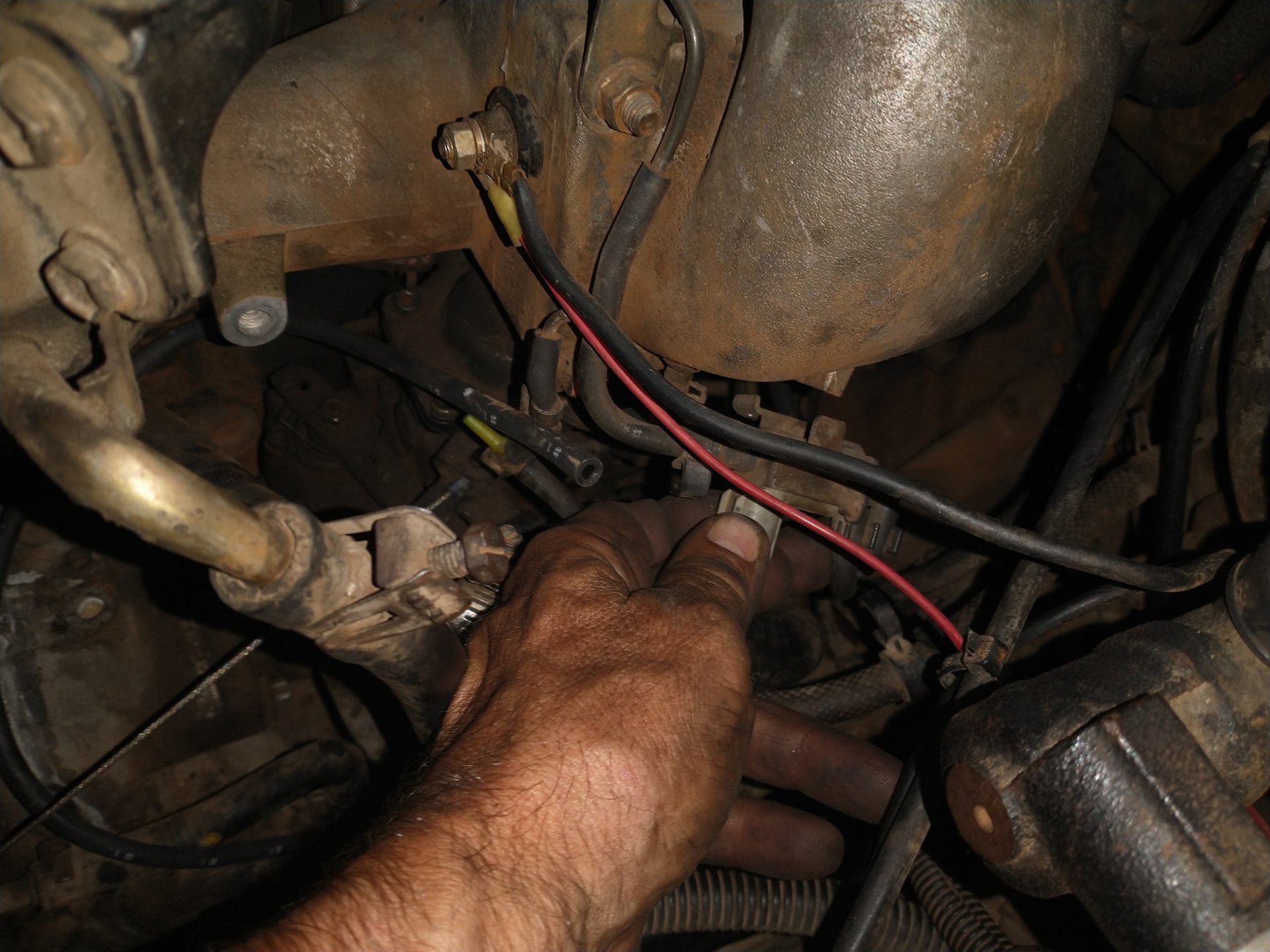 It's gone now, along with the hard lines that interfered with getting to the front injection pump bolts.

I thought about trying to pull the boost compensator cap and look inside there, but figured I'd just change one thing at a time...and I'm afraid the intake will have to come off to get to the 'top' right bolt. If I'd had it off before, I may be able to get it off with out pulling the intake, but as hard as the one screw was to loosen, I'd end up stripping an allen head trying to blindly get at that one. Maybe its accessible if I pull the intake grid heater, not sure.

Think If I go so far as to pull the intake, I'll just pull the whole pump and get it serviced. This dynamic timing advance spacer was also recommended. So may have to look to see how hard it is to get that installed. Looks interesting in the dyno testing video on the site.

good work on the patches.

I took my first trip down the jarbidge and Bruneu earlier this year. Incredible river canyons with some excellent camp spots.

I've yet to float the Jarbidge. Just hiked into it in a couple spots. Did you raft or kayak it? What kind of flow did you have? Good weather?

Think TITO will take a hiatus this year as my wife has to work the Friday after T-day.

I've yet to float the Jarbidge. Just hiked into it in a couple spots. Did you raft or kayak it? What kind of flow did you have? Good weather?

Think TITO will take a hiatus this year as my wife has to work the Friday after T-day.

As long as you bring enough wood, wall tents are toasty warm.
Click to expand...


Kayaked it with hard shells.
Our flow was lower than low, but we had to all commit to a week since It was a bachelor party trip. 40-50 CFS on the Jarbidge and 400-500 on the Bruneau.

Missed good flows by a week or two :/

Weather oscillated from sunny to overcast for most of the trip, except a mean storm blew in one night and it rained hard for 4 hours straight.

Great country to have a landcruiser in…
1984 BJ60
You must log in or register to reply here.