Greetings all. We want to use this thread to document the build and refresh of our 1991 FJ73. So this thread will detail much of the work that has gone into our beloved Pre and Post Pandemic Project.
To start things off I'll tell about how we came to purchase this beauty.
In 2019 our family decided to pack up our home and belongings and take a year long trip to Colombia, yes, South America. While there our plan was to visit family, travel all around Colombia and other South American countries, unwind from the daily grind here in the US, and gain a new perspective. The plan involved buying a local vehicle that we would use for the year. We didn't want anything fancy that would draw to much attention, something that would fit our family of 5, and it needed to travel the rough roads and terrain of the land of coffee. What better vehicle than a Land Cruiser! So the hunt was on. I had my eyes set on a few differnet ones, mostly 80 series and few different 70 series. After lots of searching, kicking tires, and paying plenty of toll road fees to go look and drive the potentials we finally found our gem... a 2008 Daihatsu Terios. Far from a Land Cruiser, but once you look at the details not too far away at all. It has a longitudinal engine, manual trans, AWD, IFS, solid rear axle, and center locking diff. Doesn't sound too far off from Toyota's local offering of a 120 Series Land Cruiser Prado or a 100 or 200 series Land Cruiser, does it? What's even more interesting is the model code designation for it is J210. So I called it my mini 200 series. I'll digress no more.
The little Terios was wonderful on fuel and very capable in the mud and dirt. What it lacked was sufficient suspension. Any amount of weight put in the thing would make the rear sag and the suspension cry over every "hueco" or pothole. Anyone that knows South America knows all about the potholes.
TIme went on and I was still hunting for just the right Cruiser to buy but nothing fitting was within range of acquiring so we kind of put the dream to rest. Satisfied with what we had.
Not long after giving up this interesting thing occured. Something called COVID-19. It was a crazy time living in Colombia during this. So many interesting things occuring amidst the police enforced almost total lockdowns. Those are stories for another forum but it leads us into the part of actually getting our FJ73.
So after all the waiting and disappointment of other vehicles not meeting our standards I came across one that wasn't too far from our location and showed well in photos. The problem was travel between departments was not allowed, no travel even out of our city. After some paperwork and lots of persistence with the authorities we got papers that allowed us to travel between two departments.
The day came for us to go see her. Naturally, when we arrived it didn't show as well as the photos had shown as some time had passed and the owner had been on several off-roading adventures. But this is exactly what I wanted, a 70 that had been owned by an enthusisast, someone that lovd her. We had good discussion with the owner, he shared tons of photos and videos of all the fun he had with her before and we came to know that he was the local civil engineer and was serious about good maintenance and using only Toyota and 555 parts. After lengthy discussion and coffee with the owner and his local mechanic we decided it was going to be ours!
Hooray!

This first picture is the one that drew us in made us fall in love with her.
More photos and stories soon! 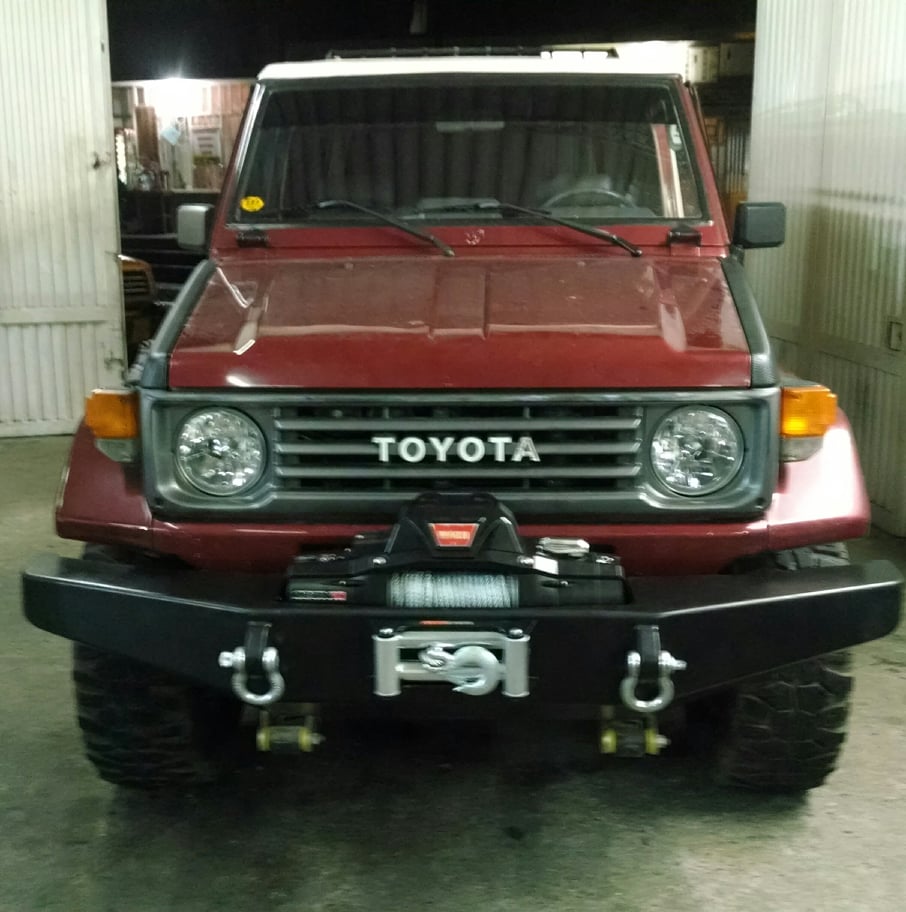 Great story. Send more pics when you get the chance.
You must log in or register to reply here.