I've tried searching in the 60 forum, but not coming up with much...

1) Two sets of shackles. One is slightly longer and the plate is thicker. The other pair is shorter with a thinner plate. Which go in the front and which in the rear?

3) Shackles are installed with the anti-inverison bolt facing toward the axle, correct? Short side of the shackle up? (I'm looking at this as my guide: https://forum.ih8mud.com/60-series-...ut-anti-inversion-shackles-3.html#post2125595)

5) The suspension was purchased with out any washers or nuts included [that sounds funny...]. Do I use washers under all nuts? Split? Any suggestions on what grade/material I should get from the hardware store? Was planning to use grade 8 stainless.

6) What kind of grease do I need to use for the shackles? Also plan to grese the leaves. Do I use the same grease?

You will probably get the best response by asking ARB USA themselves. Short shackle does go to the front.

I would just use grade 8 zinc coated bolts. I cant remember the grease name got a text to the man who knows all things greasy. (Burl). I did not use the grease between my springs I used a Teflon dry spray lubricant. don't know if its better or not just thought it would not collect dirt between the springs. all the rest looks good.
2x on the call ARB

Called ARB who were most helpful. For the record, answers were...

1) Short shackles go in front.
2) Zerks face out.
3) Short side up, inversion bolt facing axle.
4) Doesn't matter which side the '+' or '-' springs go on. Place rear springs side by side, and whichever is taller install on DS. In my case, they are the same height...
5) He didn't have any specs for hardware, but said grade 8 should be fine. He sent me a handy engineer drawing for all the hardware req'd on the shackles including torque values. It calls for split ring washers, but not under every nut. the drawing indicates where they're needed and where they're not needed.
6) "Whatever's in your grease gun". He generally uses moly wheel bearing grease. He did not recommend greasing the springs unless they were already greased and squeeking. He said the grease will attract dirt causing more squeeks and results in the need to constantly regrease the pack.

i'm starting tomorrow night. I'll try and remember to get some before measurements...

topherbecker said:
i'm starting tomorrow night. I'll try and remember to get some before measurements...
Click to expand...

I'd be glad to come by and lend and extra hand if you want.
T

I'd be glad to come by and lend and extra hand if you want.
Click to expand...

topherbecker said:
.
4) Doesn't matter which side the '+' or '-' springs go on. Place rear springs side by side, and whichever is taller install on DS. In my case, they are the same height...
6) "Whatever's in your grease gun". He generally uses moly wheel bearing grease. He did not recommend greasing the springs unless they were already greased and squeeking. He said the grease will attract dirt causing more squeeks and results in the need to constantly regrease the pack.

I have always seen that the + was on the drivers side. Thats how I did my 60 anyway. and I would grease the shackles to start with then if it squeaks grease the springs. If yours is like mine I had a squeak coming from the main bushing on the springs. but went away with a little bit of driving.
T

I got the rear installed last night in my driveway. One of the lower shock mount washer/bolts was buggered up enough that it couldn't be reused. Other than that it went really well. All the pins came out with minimal coaxing - didn't even think about using heat, used just a 2 and 8 or 10 # sledge. The rest of the hardware came off easily with a 2' breaker.

After hanging both ends of the DS spring pack, we had quite a bit of trouble getting it to line up with the spring retainer/spring seat. This was the only point in the install where there was any swearing - I consider that a monumental success. Anyway, I had read that it was easiest to do one side at a time (with ubolts loose on the opposite side), but our experience was that it was best to pull both springs. This allows you to position the axle without too much difficulty - the DS especially was easy to maneuver and would be my recommendation for installing first. Definitely remove that zerk on the rear driveshaft too; you'll be hard pressed to move the PS of the axle into place with the zerk installed.

I failed to measure before installing the rear, but i'm sitting REALLY tall right now. Probably 4" above my old springs which still had some arch to them. I think I measured close to 38" from ground to fender at center of wheel well, and it's sitting on 235's! My shackle angle in the rear isn't that great, almost vertical, pointing in towards the axle just a tad. Hopefully this won't affect ride too much since I have no desire to move spring hangers.

Start on the front Thursday. It looks kind of hilarious right now with the huge rake to the front - like some old hot rod, but not as fast.
T

I know everyone likes pictures. Shackle angle is pretty steep. It rides okay though - a little bouncy. I'm only running a sway bar in the rear right now.

Pics 1 and 2: tearing down the front. all that crap on the driveway was from taking a sawzall to the tail pipe.
Pic 3: OME installed with 235's 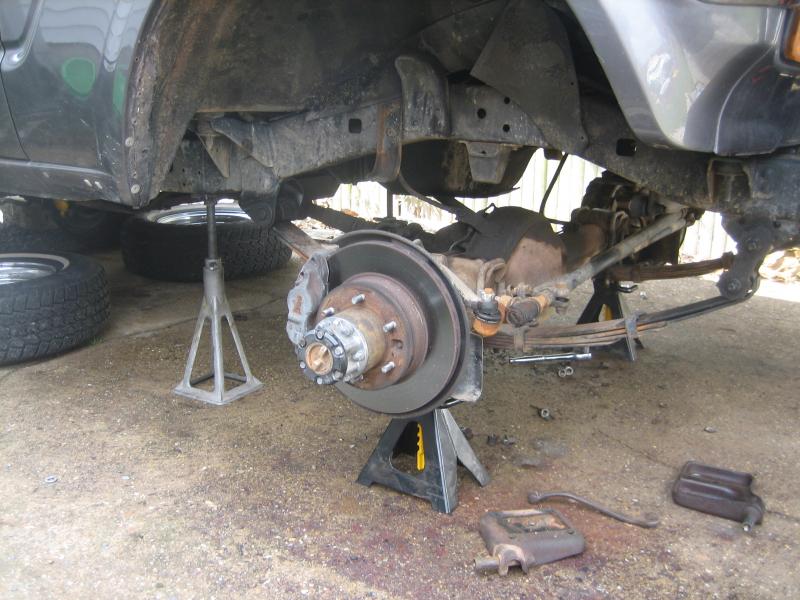 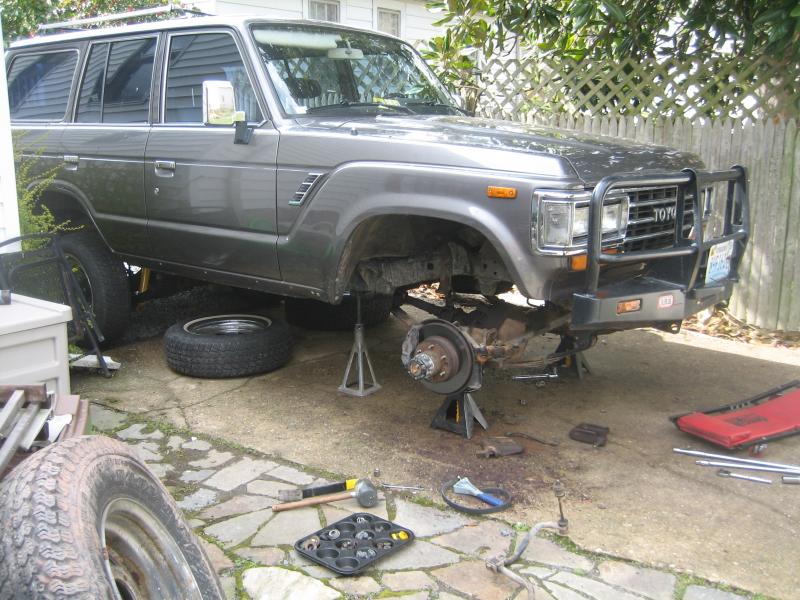 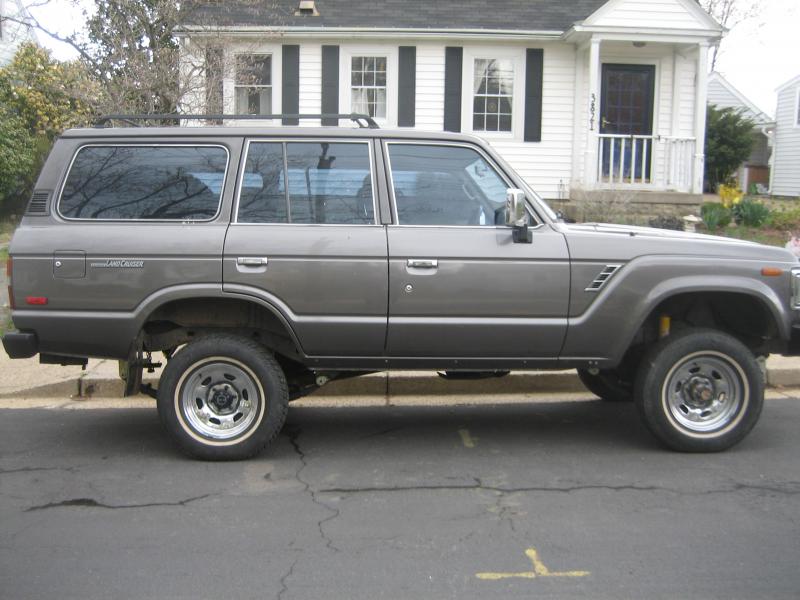 Tires are inflated to 35 psi (according to the guy who mounted them - i haven't verified). You can see I'm getting pretty poor contact with the road. Hopefully airing them down a little will help with that, although it will hurt my already crappy mileage. Anyone have some wider wheels they want to sell me? 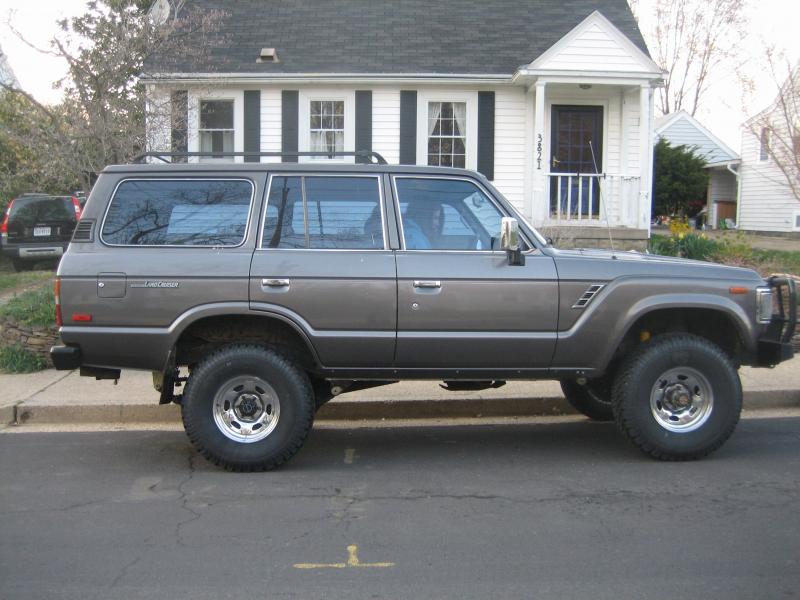 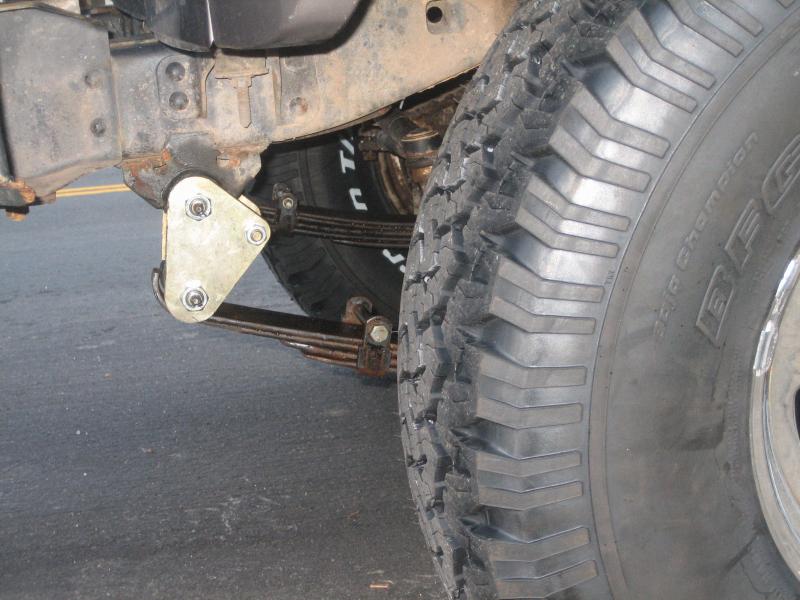 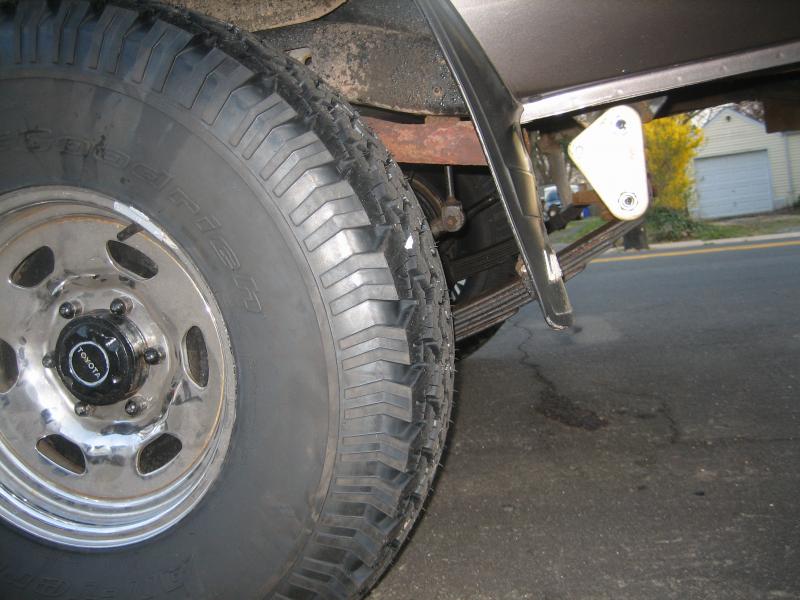 Looks good to me, i have seen a lot worse shackle angle. Let me know if you are getting new wheels, i might have a need for the stockers.
T

Only thing not installed is the steering stabilizer. The one I have on there has TRE-like attachments on the ends - cone shaped metal that presses into the tie rod. I'm not sure how to mount the OME stabilizer since it doesn't have these fittings on the ends. Need to look that up...
R

looks great. not quite the "stock family cruiser" anymore you claimed you wanted

rollrover said:
looks great. not quite the "stock family cruiser" anymore you claimed you wanted
Click to expand...

I have no rebuttal.

It's still the family cruiser!

The off road family! You know what they say the family that wheels together stays togeather.

Chris
You must log in or register to reply here.