Hello everyone,
This is my obligatory first post thread!

Some background: I have never in my life owned a truck of any sort much less an SUV, and have been driving wagons and hatchbacks pretty much my entire life. I have also built a few Japanese sports cars (mainly Mazdas) so I am sort of familiar with my way around 80's and 90's cars. I have recently "finished" my latest Mazda car, and have been enamored by the idea of owning a LC in the last few years. A few reasons for this is 1) I wanted to be able to tow the other car (weighs in at 2600lbs) to events, 2) I wanted to have something that had the same cargo room as a large wagon, and 3) be able to take camping trips to unknown (to me at least) parts of the USA with minimal issues.

All that said, I narrowed down my choice to the 100 series, or more specifically, the LX 470. I wanted the plush and comfy creature comforts so that driving would be more pleasurable for both my wife and I as we travel across the USA in search of finding beauty in nature. Originally, I wanted an 03-05 LX, but after searching for the last 2-3 months, these typically cost much more than their 98-02 counterparts for the same mileage. I then started looking at the older models and after looking at a fair amount of LX's, I came across a 98 in Georgia on CL. Luckily for me, it had only been posted for a mere 20 minutes before I called the owner. I confirmed with him a few things, ran a carfax, looked up the service history on drivers.lexus.com, and purchased a one way plane ticket from Texas to Georgia for the next day.

The PO had owned the car since 2005 with 58k miles on it, and the car now had near 220k. The timing belt had been changed at 165k and most everything of importance still worked. AHC performed like it should, no weird squeaks, sounds, rattling from the LX, and it drove fine from my test drive. I offered him a fair price and he accepted. Here it is the first night I bought it getting gas (of course it was empty) in Georgia: 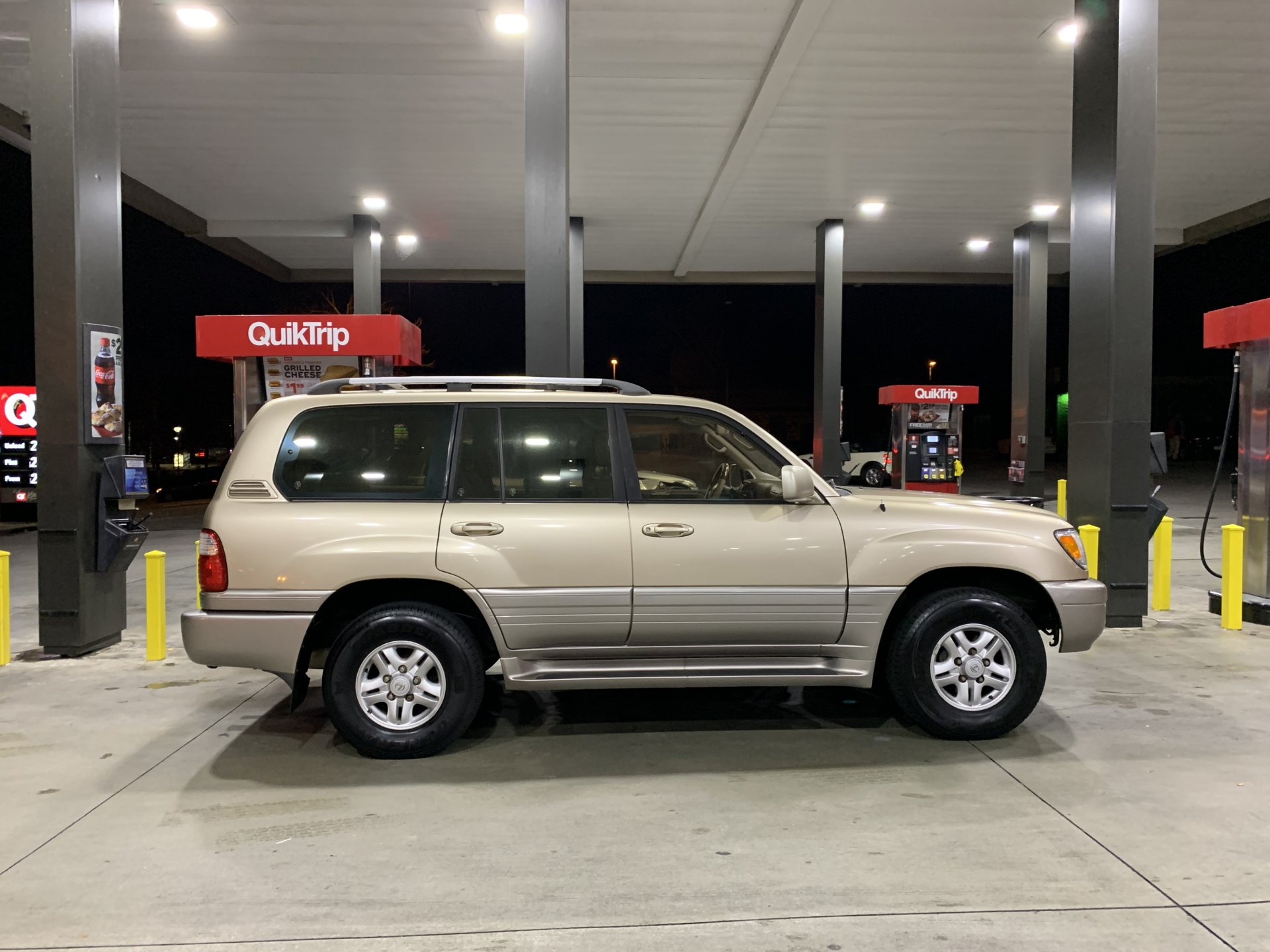 I had the chance to become acquainted with the LX on the 800 mile journey back home and as soon as I got back, I began to really go over all it mechanically and look for any warning signs I've read about here on these forums. The first order of business was to replace the infamous heater tees and related hoses as the only thing that was of concern for my trip from Georgia was the pink residue left over on the existing heater tees

Thankfully they held up for this one trip but once the new hoses and tees came in from an online toyota dealership, I changed them out that same day. Good thing I did too, as the one heater tee I was worried about easily collapsed as soon as I grabbed it. 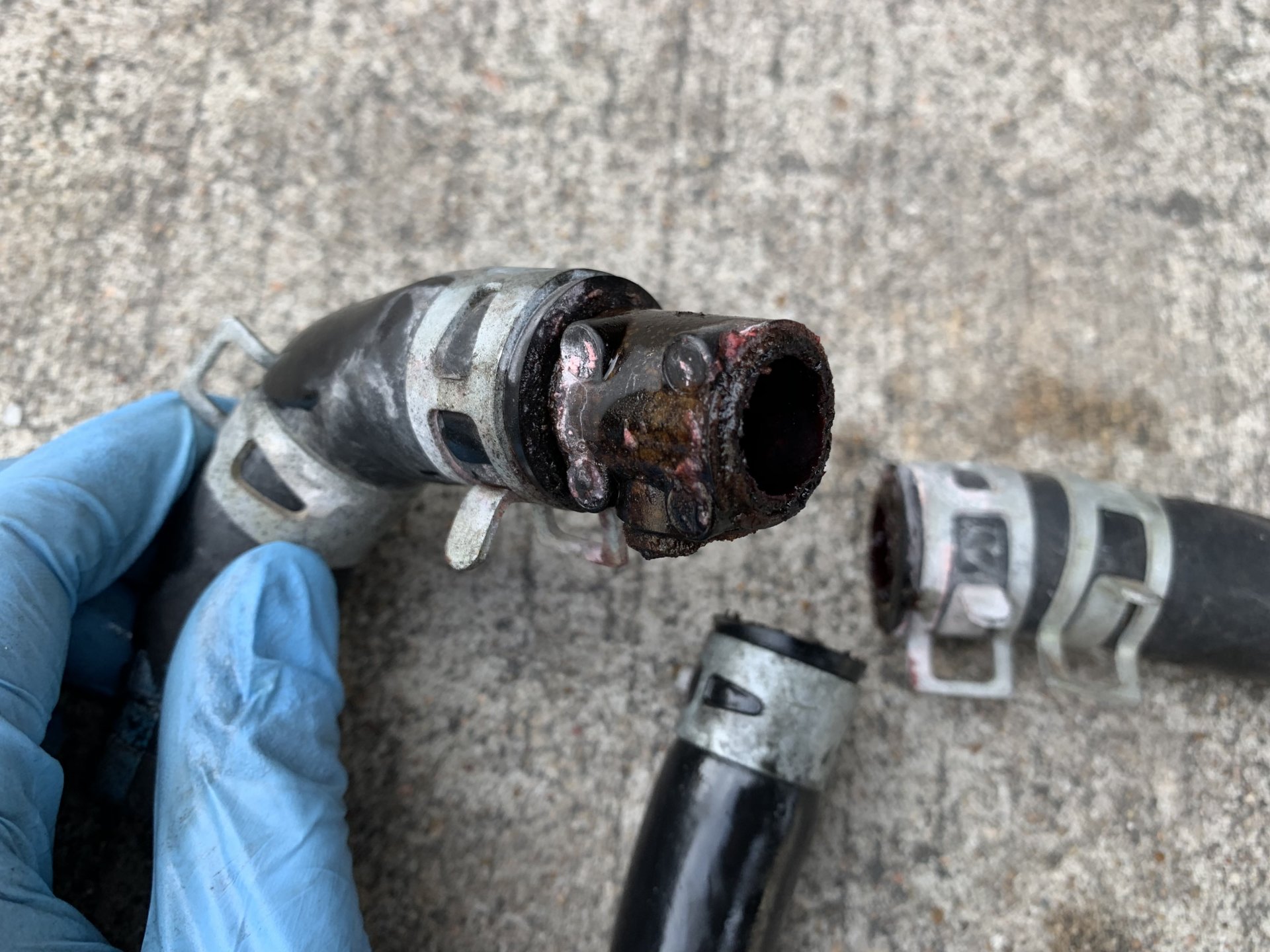 After that, I felt much better, but I also flushed and replaced the fluids, changed all of the existing filters (which were in bad shape), fuel, air, cabin, and had a few other friends more familiar with 100's look over the truck. After driving it everyday for a week after, I figured before I started researching on parts I wanted to make the LX more off road capable, I wanted to see how it handled in stock form, tires and all. So I removed the running boards in preparation for a small outing at Hidden Falls Adventure park in Marble Falls, TX, just west of Austin.

I went this past Sunday with a friend in his 80 series LX as I had no idea what to expect during this outing, and soon I found myself laughing out loud at some of the most amazing things this 100 could do in stock form. Here are few pics of sunday: 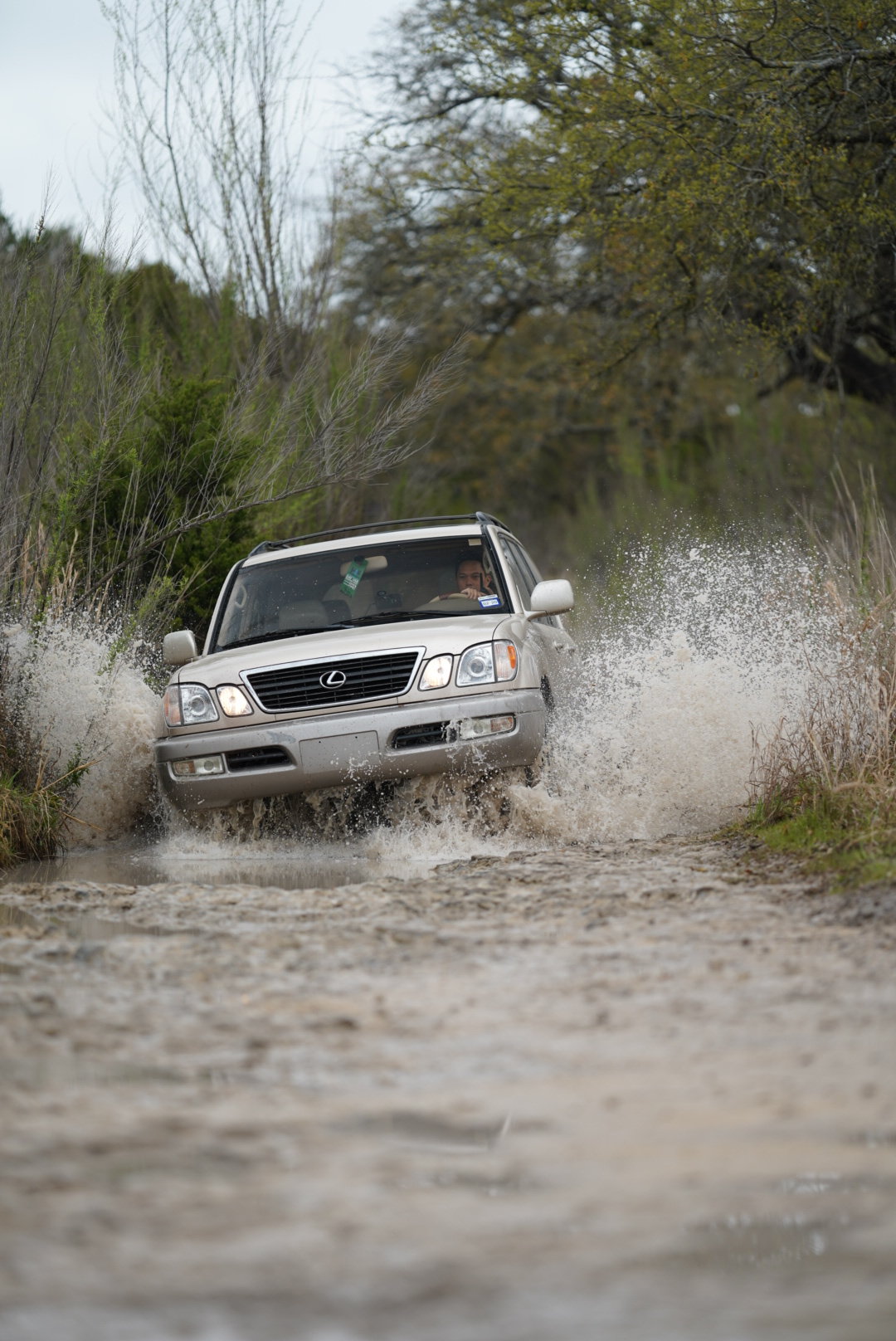 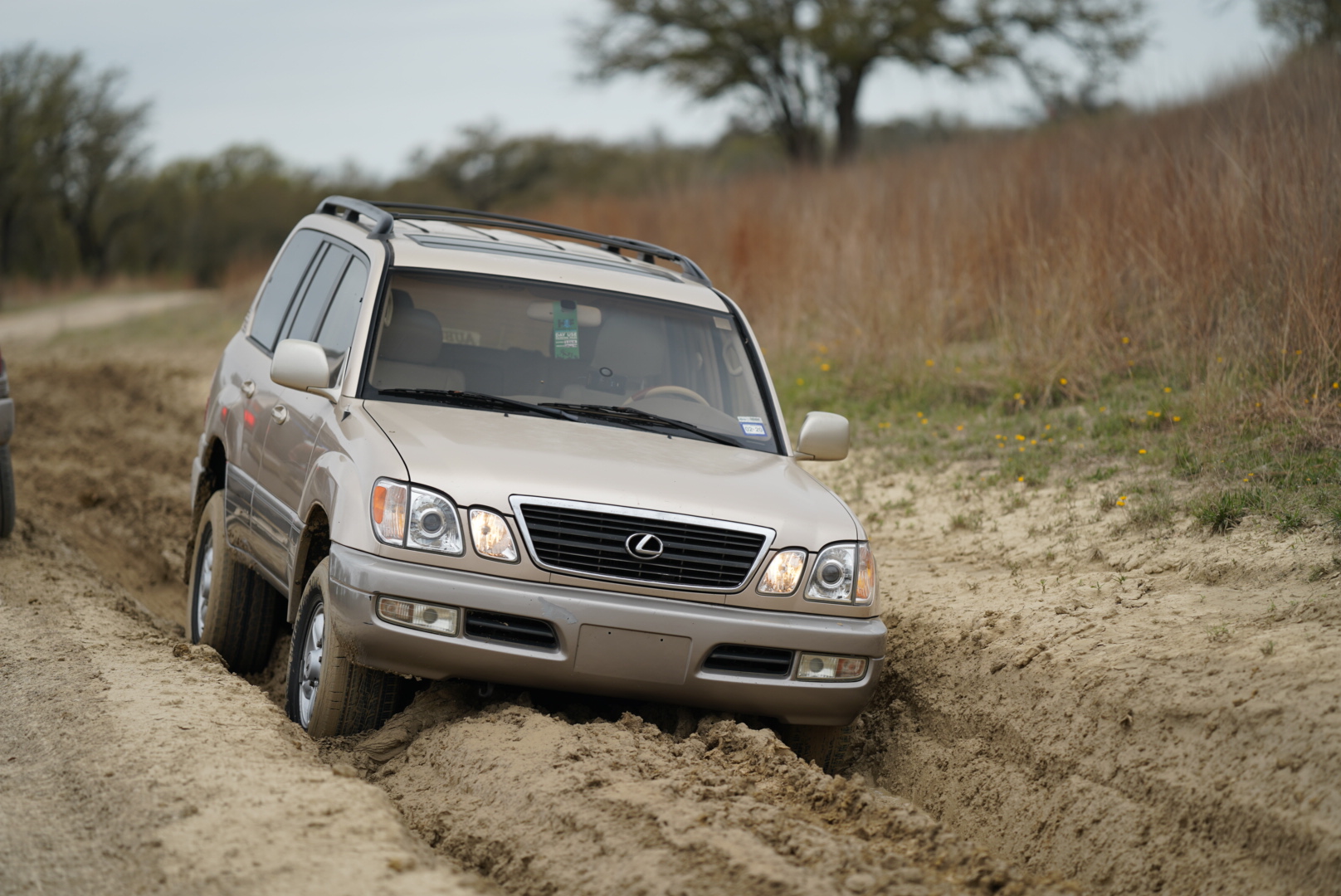 I had a blast and will definitely be making more and more trips like this in addition to camping trips to become better familiar with the 100 series and look forward to upgrading a few things to truly make it a more capable adventuremobile.

Shot of the day: (taken from a video screen grab from my buddy on his iPhone) 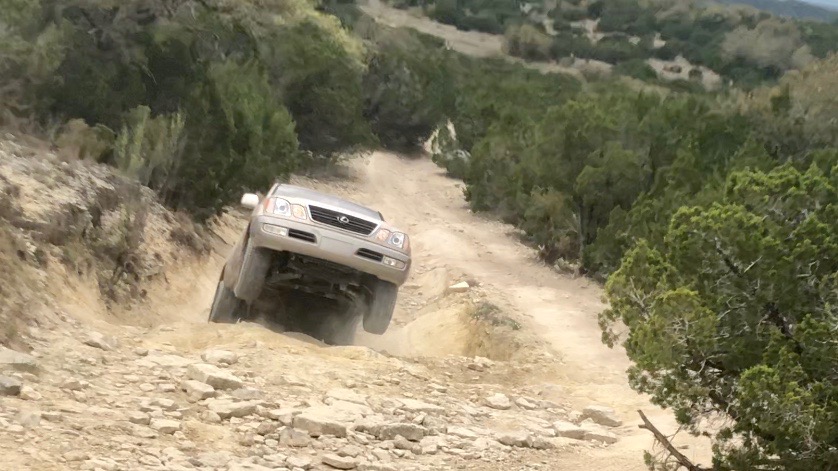 Welcome to mud! There are some thread's here on mud about protecting the front diff during tire lift on the 98-99 models.

Haha that was not my intention but it is definitely a cool photo for a first timer like me. I don’t plan to hop up like that ever again!

trdcorolla said:
Welcome to mud! There are some thread's here on mud about protecting the front diff during tire lift on the 98-99 models.
Click to expand...

Thank you! Yes a front skid plate is definitely on the list of things to get for me as the factory piece was missing from this one
T

I didn't notice your missing front skid, haha. That's a good excuse to get a aftermarket skid. I was referring to some here say the 98/98 2 pinion front diff is more prone to failure than the 2000+ 4 pinion front diffs. A few 4 pinion front diffs here blew so take that as you wish. Post #8 in 100 Series Front Diff Failure - Random Chat has more info.

Welcome! My hundy has another twin in Texas! 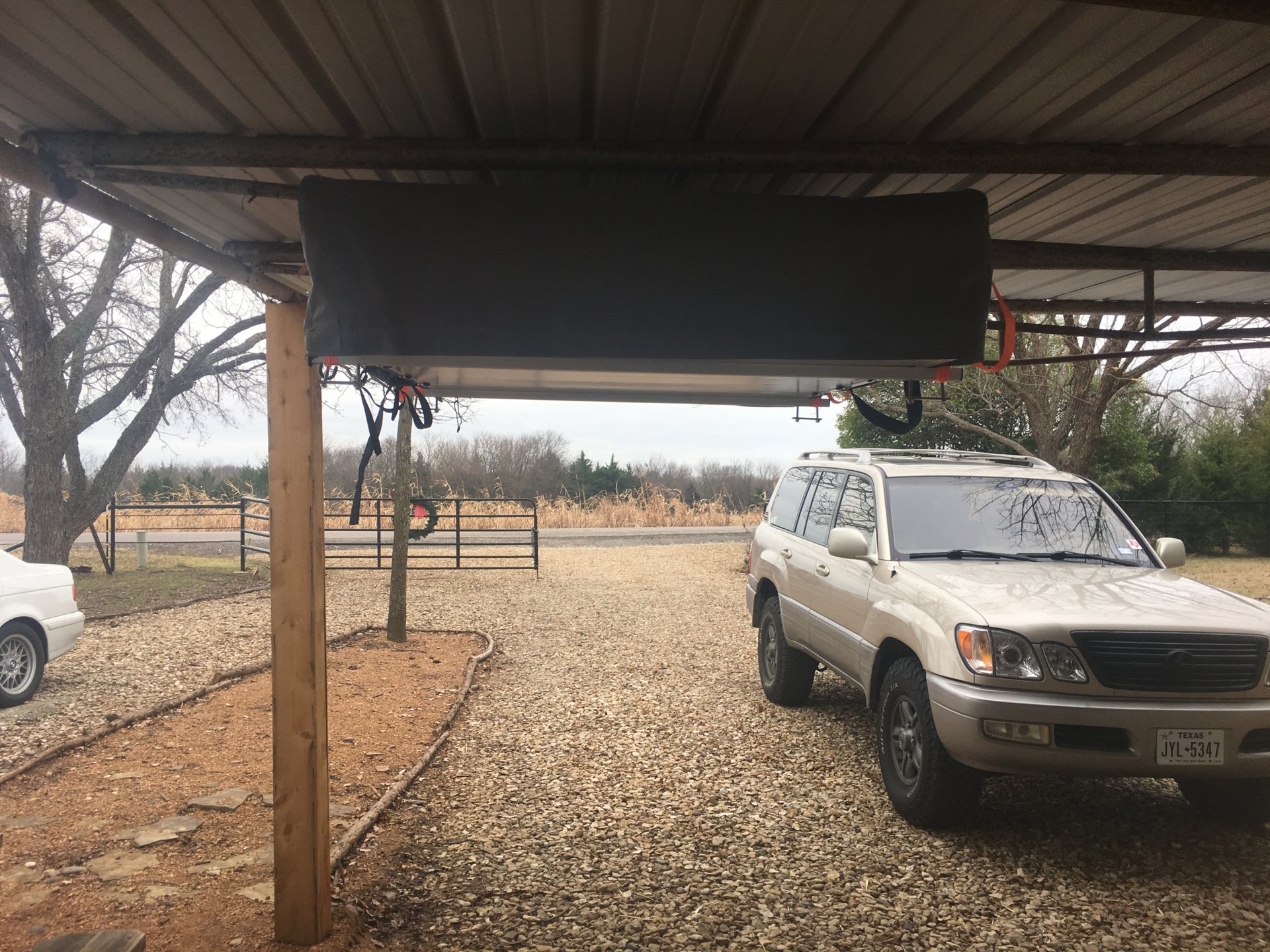 Thanks to all mud members.