I have done a ton of research on Land Cruisers and although I was initially looking for an 80 series, there just aren't that many available here in Florida. Really, for me the 100 is a better vehicle. I have a boat to tow and the V8 and 4.30 gears take care of that.

The reasons I pulled the trigger on this particular vehicle is that it had everything I was looking for. Or more specifically stuff I didn't want. I didn't want the horrible gold emblems and fake wood interior. This truck has neither of those. It has a locker and rear air.

Well, I pulled off the running boards and threw some flaps on the front. Then I had some 285 BFG AT's installed. I installed a new antenna stalk. I fixed the cup holder door and threw in some new floor mats. I also put some new Toyota shocks on. They were only $24 each. I also did the 7-pin mod. That's the deal for the boat ramp by the way.

I also started to baseline the maintenance. I did a gear lube change, wheel bearing repack. Serp belt, air cleaner, etc.. I will be doing the T Belt pretty soon too.


I did have a small problem intially. When I removed the resonator to change the serp belt I noticed that one of the emissions nipples that sends vacuum to the charcoal canister was broken. I glued it back on but unfortunately it threw a code P0442 I think. Anyway I got under the hood and determined that I glued the hole shut, so the emission system had ho vacuum to purge with. I shaved the old nipple off and tapped a hole for a brass nipple. Reset the code and it hasn't been back in two months.

Future mods include painting the cladding body color and painting the bumpers a darker grey metallic color. The Taupe color is ugly.

I just wanted to say thanks to all the folks that have posted on here. I have scored a bunch of good info off this board.

Here's a pic of the truck. 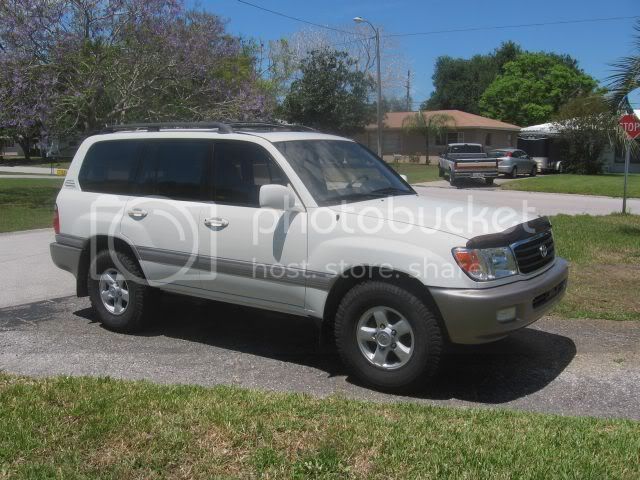 hello there my sister lives in tampa bay and i often go down there for vaca there is a nice trail out towards lakewand or soething i have it in my truck went there when i had my old 99 lx no cruisers mostly jeeps and pickups next time im there i will send ya a email good luck with your truck
You must log in or register to reply here.