I just bought a 1988 landcruiser and im wandering about some particular's on it. Its all stock and runs good. Is this a fj60 or fj62 since its a 1988 model? I am wanting a lift and which one is the best for the money? Im used to owning fj40's and any info on this would be great...thanks

You have a FJ62, if it has 4 beautiful square headlights it's a 62.
Before you start asking about lifts, I'd use the search tool. Go advanced search and narrow your query to 60 series wagons. That should keep you busy for a couple of hours, been years of discussions about lifts

Read away and finally decide to contact Kurt at Cruiser Outfitters and get the OME heavy/heavy.

Front Range 4x4 said:
Read away and finally decide to contact Kurt at Cruiser Outfitters and get the OME heavy/heavy.
Click to expand...


Exactly. Don't over think this.

what about just doing a shackle lift to fit 33's?

You have a FJ62, if it has 4 HIDEOUS square headlights it's a 62.
Before you start asking about lifts, I'd use the search tool. Go advanced search and narrow your query to 60 series wagons. That should keep you busy for a couple of hours, been years of discussions about lifts
Click to expand...

Front Range 4x4 said:
Read away and finally decide to contact Kurt at Cruiser Outfitters and get the OME heavy/heavy.
Click to expand...

thanks guys ill check it all out...

Shackle lifts look and perform badly on an FJ62. You will also wonder about add-a-leafs or "helper" springs. Those work for some people. Some have tried having the springs reformed, that doesn't seem to last very long. Most do a suspension lift and ARB is the most popular. Lot's of guys do a spring over. So, you've got several options. Depends on your objectives, the size of your wallet, and your skillz. Lots of info here on MUD about all those options. Have fun with your decision.

Alcan is another option for lifts but they have a hit and miss reputation. I have a 5" Alcan lift that fits 35" tires but I bought mine used and knew that the lift worked. There are other people here that have horror stories about the springs completely sagging out during the middle of a trip. OME seems the most popular. If you only want to fit 33s then OME (made by ARB) is propably the way to go. If you want to fit 35s or 37s, the SOA (Spring Over Axle) conversion is probably the best way to go. I like the Alcan 5" lift because it gives me enough lift for 35s but it also retains enough lifting force to carry a heavy wagon stock full of expedition gear. But I will probably eventually go SOA. Who knows.

Chad brings up a good point about Alcans. I thought mine were great. I know of one guy that had a bad Alcan experience, but generally you hear good things.

I have since gone SOA.

You should look at all of this as a work in progress. Do a known quantity now(OME-heavy), then in a couple of years sell those and do something else. I went through 3 different SUA suspensions in my FJ40 before doing a spring over. The best there by far was the 4 inch Alcan.

It's more of a process than a one time build. That's just the nature of it. Since that's the case, 2-3 years from now when you are ready to try something new, the OMEs will be the easiest to sell.

Welcome to the madness.


I hear that square is the new round.

if it is all original:
it was made in 1988, the year is now 2010....that be 22 years if i'm not mistaken.
that's a long time for leaf springs on a fairly heavy "car". and one that had relatively soft springs from the get go.
any band aid "lift" is going to handle poorly at best, nor is it not going to look any better. longer shackles now are just a plain bad idea.
the best thing you can do is new stuff, not just springs but the bushings and shocks as well/ expensive? yes! but there little elsewhere where the money is so wisely spent.
i'm not going to go in to who's best and who is not regarding springs and or kits.
L

hondatech81 said:
what about just doing a shackle lift to fit 33's?
Click to expand...


A lot depends on what you want to do.

The stock 62 suspension will handle 33X9.50's without rubbing. If you like that size (many do) you're set.

The low buck lift is add-a-leafs (long only, short suck) + mild shackle lift. You will gain 1.5" or so. You could also add a body lift for another cheap inch. You could probably run 33X12.50's on this setup...but each truck is a bit different (due to age/use of stock springs).

The reason everybody jumps to suggesting OME is that nearly everybody ends up there eventually. It is a great solution for most people most of the time.

There is so much info on here about lifts...read up, then post specific questions.

Also, strongly suggest you read the ROTMs...that will give you a sense of how people use their cruisers, and what they've done to make them work.

Though, if you want to run 35s or larger, skip all of the lift kits and go straight to SOA. You'll spend around the same amount of money as you would on a proper lift, so it skips the 'proper lift' middle step. Put the rest of the cash in something cool, like a nice set of bumpers, etc.

Course, this is coming from a guy that tried to be cheap. Shackle lift + Add a leafs. I don't think it runs horribly (just barely stiffer than the sagging stock suspension I replaced, and I have room to spare with new 33x12.50s), but then again I've never ridden in an SOA or OME-equipped cruiser, either. All things considered I spent probably half as much money doing it the cheap way as I would have by getting something like an OME lift. Ah well, lessons learned (somebody mentioned process....).

Just throw another option on the fire, parabolic springs from Heystee, aka HST, provided me with a big lift with a smoother ride than leaf springs can offer. Way adequate for 33s. I could probably tuck 35s in there if i wanted.

Last I heard he was waiting for more orders to do another production run, but if you're not in an immediate hurry, it may be something to look into. 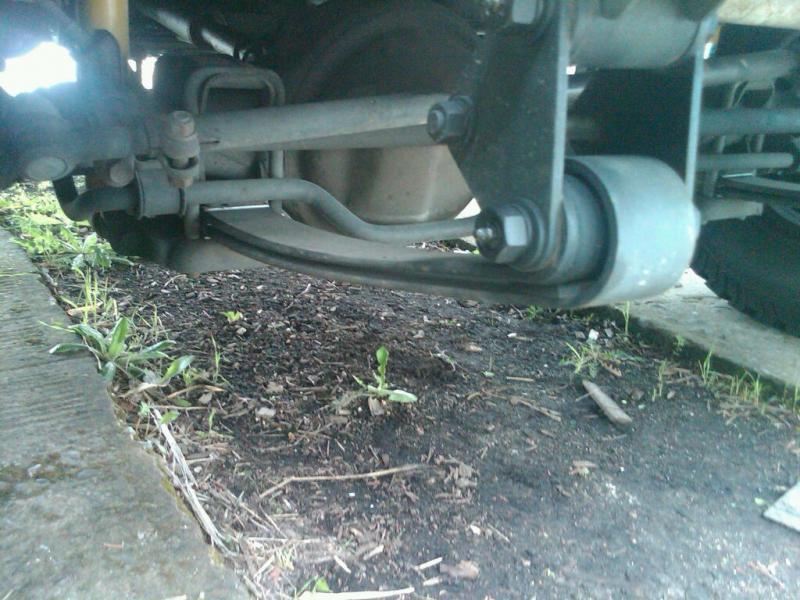 Just skip all the intermediate steps and go SOA. The ride is nice and you can fit 35s or 37s. Or buy a used lift so when you want to go bigger you can sell the lift for something close to what you paid for it. If you are addicted, then you will eventually want to go SOA. It just seems to happen that way.

Unless you have hip problems or something, getting in and out of an SOA '60 isn't that hard. Might be a bit of a challenge for little kids. I have a stepping stool my kids use to get in and out of my '60. My son doesn't use it any more but my daughter still likes to use it. I don't think she needs it any more either but she just likes the idea of it, I guess.
You must log in or register to reply here.

FJ 60 Clutch "While you're in there" items