Background: Last year I was able to purchase a 1972 FJ40. The same FJ40 I first learned to drive on as a teenager. It was my grandfather's ranch vehicle and it was abused / neglected for the past 30 years. Never been washed and serviced maybe a handful of times. While out in the field tending to some fences, the radiator fan broke and became unbalanced causing the water pump to break off the block. Gnarly damage and luckily nobody got hurt. The Blue Bucket, (FJ40) was towed back to the house with a backhoe (ranch stuff) so we are sure the engine didn't overheat. 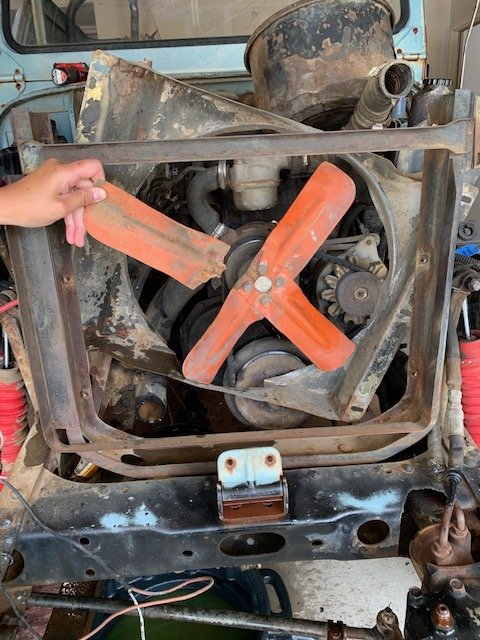 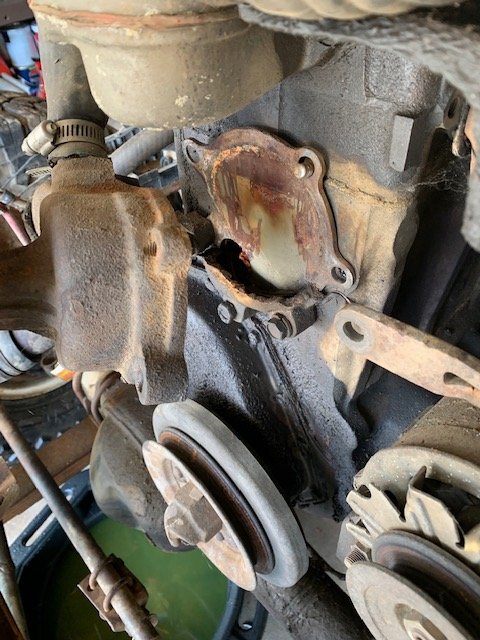 What I was hoping to do is a full restoration. We towed the FJ down from Northern California to the Northern San Diego area. First time in a garage since the 80’s. Wife and I have been taking the thing apart as best we can so we can see how much rust damage is on the frame. There is a lot of mud caked on that looks like it has protected a lot of the underside of the frame. However, we have plenty of rust to repair. 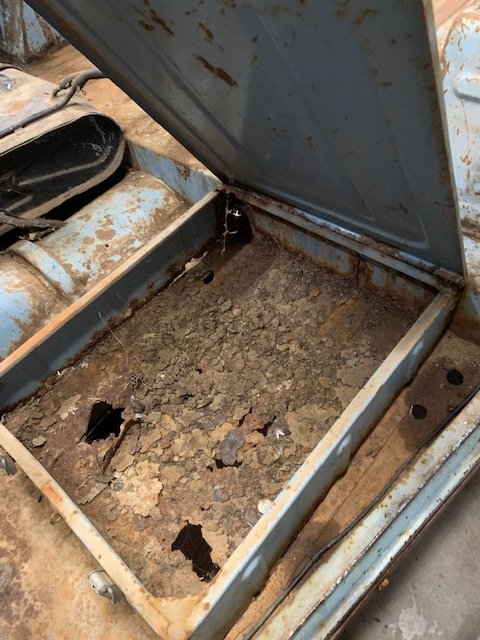 About ready to pull the tub off the frame and get down to business. My plan was to work the restoration from the ground up. Before I commit to any big purchases I would love to get some advice.

One big thing I would love to do is drive the Blue Bucket back to the ranch and show my grandfather the FJ again. It's about 600miles north on i5 (70mph) using the 3 speed. I know these FJ’s are not intended to go fast, but is there an option to change gearing or transmission to get some better highway speeds? Make driving anywhere out of San Diego a little easier. I figure that I should invest and work on these items now while the body is off.

Things I am hoping to start with, please let me know if there are resources I should look into and or avoid.


Apologies if these items have already been discussed as I am sure they have over the years. I’ll keep doing searches in the forums too. 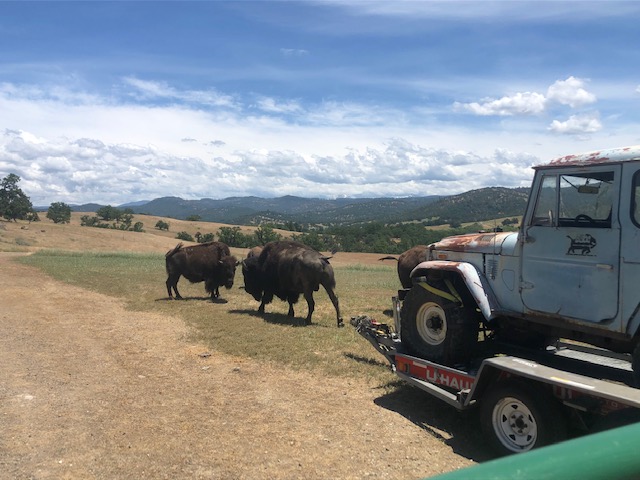 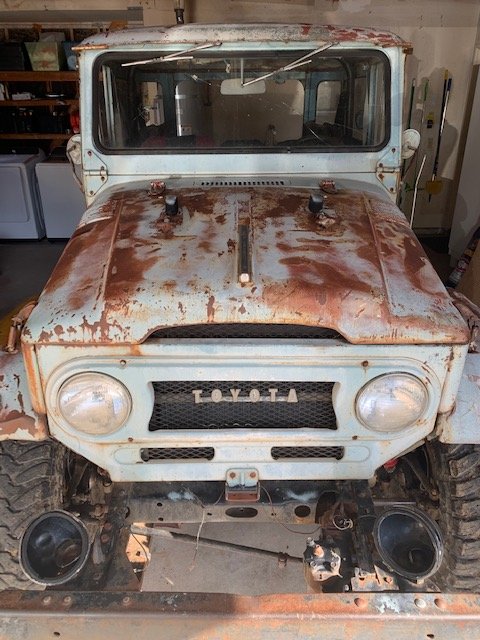 Welcome to the Mad Todd!
Save your family's beauty!
Cheers!

Focus on the mechanicals and get it running as it is. Once it is sorted out mechanically then start body repairs.

Welcome and so cool you're keeping the 40 in the family. Please keep that great patina and bull logo!

Love that top first pic. Can we get closer shot of the logo on the door? Love the story also that just makes the ownership/rebuild that much more special.
Congrats again!!

Your question about speed comes up often. I left Kodiak AK in 1976 in a 1969 FJ40 loaded down and 19 foot Tipi poles on the top rack. Speed wasn’t important on the Alcan, as it was all dirt road. But I chose to stay in Canada because the speed limit was 70 or better up there as compared to the states where it was still only 55 mph. I never thought about it being a three speed transmission. Had 15” rims with 8 ply tires on and just drove. You could increase wheel and tire size and get more revolutions per gear. Just a thought.

Welcome tambo.
Since you say you are taking the body off the frame it doesn't matter which you do first - body or mechanical restoration.
The body work will probably take longer to complete and while it's off, the frame and running gear will be a pleasure to work on.
On my oldie it was obvious I needed to rebuild the rear diff. Just check the driveshaft for excess play. Parts are available.

I just finished rebuilding my F engine and can give you some ideas as can many more experienced Mudders.

If you ask me I'd rebuild what you have, including the brakes and transmission if needed. Then drive it 'stock' and decide if you want to 'improve' it.

That looks like a nice rig to restore with a good history behind it. The water pump doesn’t look like a big deal to fix.

I’d keep it original and appreciate it for what it is. Resist the urge to make it what it’s not. It’ll never keep up with modern day traffic, nor would you want it to. Fix it up and drive the back roads up to grandpa’s house.

Hey Tambo, Welcome to MUD. Great backstory, your grandpa had great taste in a ranch truck. Lucky you.
I have a 12/69 FJ40 that I have spent the last 6 years slowly bringing back to be a regular driver on the road and sometimes on the trail.
You mentioned 70mph. If you want to do that your F will not live very long even if you rebuild it. I went on a trip of about 400 miles at 65 or so and blew a piston thru the side of my engine.
The things I like that I did was, go to what is called a "dumbed down 2F". You use a 2F long block and install your F components, intake, exhaust, carb, breather, and get the benefit of a better oiling engine and it still can look original.
Upgrade to 31 inch tires. I rebuilt the brakes, wheel cylinders, soft lines, new master and slave cylinder. They stop just fine. I checked and resealed the tranny and transfer and redid the front knuckles.
Go through your wire harness and get it all working and rewound.
Resist the urge to go down the rat hole. My son and I have a 72 that we went so deep that we are never going to crawl out.

I've read numerous complaints about those metal fans breaking on here. (I replaced mine with a plastic fan because I had one available.) A new water pump and radiator, and should be back to running. Is there some other compelling reason to rebuild the motor?

Three speeds and four speeds both have the same 1:1 high end gearing. I believe the 5 speed (hf55?) has an overdrive (taller than 1:1). It won't be cheap, and you'll want to research other's conversions to see how involved it is (I think it's slightly longer and the frame gets in the way of the parking brake).

The different transmissions have different spine sizes on the output shaft, and this usually determines what transfer case you'll use. The 3 speed case has a lower low range gear, but it reputed to be weaker (apparently got strong as years went buy, 1972 should be fine). If you pickup a used transmission to swap, try and get the xfer case with it.

But, these thing usually last a long long time.... transmissions, transfer cases, axles, etc... If you're not mud bogging or rock crawling, they are likely going to last, maybe some new seals and gaskets and a good cleaning.

It looks like the steering has been modified with a saginaw steering box. This is common on FJ40s. But, it requires cutting a hole through the front cross member for the steering shaft and then welding a new plate to the frame for the steering box. I can see the hole cut through the cross member in your picture and it looks like there was no effort to reinforce the cross member to compensate for the decreased strength (usually welding in a tube). And would suggest having an expert look at how the box is mounted, not being on the ranch anymore, the danger of that falling apart has a bit more risk.

And I would swap at least the front brakes to disks. The drum brakes are quite capable of stopping if properly adjusted... Disks just work, at least as well, as long as there are pads and working hydraulics.

Before worrying about it's performance on the freeway you'll probably want to consider how to install air condition.

San Diego doesn't need air conditioning in a 40. The top NEVER has to be on! Get it mechanically solid when stock., drive and see.
I'm relatively new to the 40 game and already learning to enjoy drum brakes again and the very slow "acceleration" of my B motor.

And by all means KEEP THE PATiNA! especially since it was acquired in the service of your grandfathers farm.

greenbeast said:
Love that top first pic. Can we get closer shot of the logo on the door? Love the story also that just makes the ownership/rebuild that much more special.
Congrats again!!
Click to expand...

Here is a closer shot of the sticker on the door. "BISON Healthy never tasted so good"

Grandfather raised and sold bison on the ranch. The buffalo all recognized the sound the the FJ and knew it meant food was coming. He usually some kind of feed with him and they would come close to great him, like dogs looking for a treat. It was an awesome thing to see. 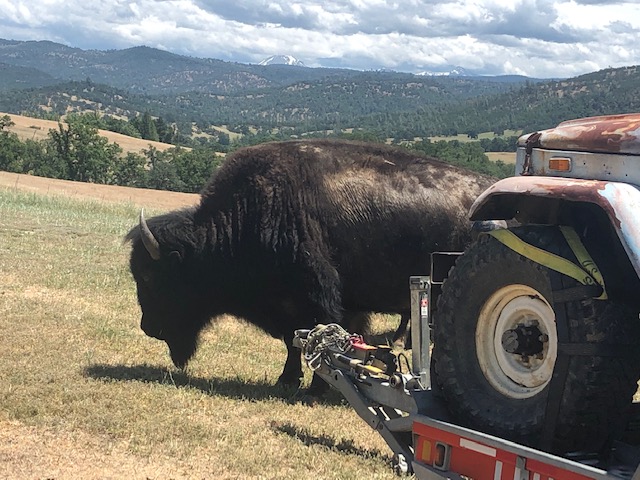 I also like Bison, been eating it for years. Welcome to all that is mudness and keep the pictures and the story coming, we are ALL suckers for 40 pics!!!
You must log in or register to reply here.

L
9 year resto -mod and finaly on the road
2

Preparing to restore my 72 fj40

Mar 8, 2021
rainingagain
R
6
Narrow Fender Flares for FJ40 and Best Options to Restore Fenders That Have Been Cut
2