Toyota Trail Riders is hosting a TLCA Sanctioned event January 19th through the 22nd called the Lone Star Toyota Jamboree. This also will be held at Barnwell Mountain (Gilmer), and we will be heavily promoting it (including magazine advertising in Toyota Trails and 4WD Toyota Owners Magazine).

We chose those dates specifically so as not to interfere with LSLC’s Round-up at Katemcy in March. This event will be a fundraiser for Texas Motorized Trail Coalition, and we very much would hope to have LSLC’s support.

The proceeds go to an organization that operates BMRA and is seeking to acquire additional wheeling properties in Texas- thus benefiting everyone concerned. Also, the event will be covered in a multi-page spread in 4WDTO magazine, which should generate positive publicity for everyone concerned.


Below is an outline of some of the events scheduled for the Jamboree:

A “Time Trial” trail run utilizing staggered starts, winner has best time through a trail.
A "Trust Your Spotter" blind folded run (another timed event) will be very short.
A “Powder Puff” run, so the wives/GF’s who don't ever get to wheel have the opportunity to compete on a light trail.
The “Lone Star Jamboree Challenge” will be the highlight of the competition. A timed event as well, this will be a crowd pleaser as vehicles attempt to conquer Scorpion’s Pass.

Of course there will be the obligatory raffle, fine Texas BBQ and Plenty of Shiner as well.

What this thread needs is a visual aid.

I don't know who does their graphic design stuff, but it's always kick ass.

One piece of trash is in.

Sounds like Smith is in. He's trying to convince me to go. I'm so lame I can't even get to Windrock this weekend though. Will there be an ammo box full of sweaty stripper cash waiting for me?

Location
Valley of the Heroes

I'll have to be in on this one I think. Better start saving the pennies since it will be 2 trips in a weeks time.

Reckon we'll be there again ... be nice if some other folks show up this time.

im going to try my best to make it!

We apprecaite the support, and signup is now live!

The Toyota Trail Riders are proud to announce that Driver Registration is now open for the Lone Star Toyota Jamboree! (Passenger registrations will be at the gate)

The event will be held at the Barnwell Mountain Recreation Area in Gilmer, TX from January 19th – 22nd.

In order for this to be as successful and fun as it can be we are asking for Driver Registration now. This will enable us to better solicit sponsorships and prizes as well as plan for the event and the meal.

If you encounter any problems please let us know.
registration@lonestartoyotajamboree.com

If you have questions or want to keep up with current information, you can visit us here: http://www.toyotatrailriders.com/forum/forumdisplay.php?f=41

TTR will have a keg of Shiner at Old Camp Friday night....

JasonH said:
I don't know who does their graphic design stuff, but it's always kick ass.
Click to expand...

Thanks! That would be me. Hope to see you all there, its going to be a great event.

tx_maverick said:
Thanks! That would be me. Hope to see you all there, its going to be a great event.
Click to expand...

Hey, I clean up pretty good! Just haven't had occasion to recently, that's all...

Our ad in 4WD Toyota Owners 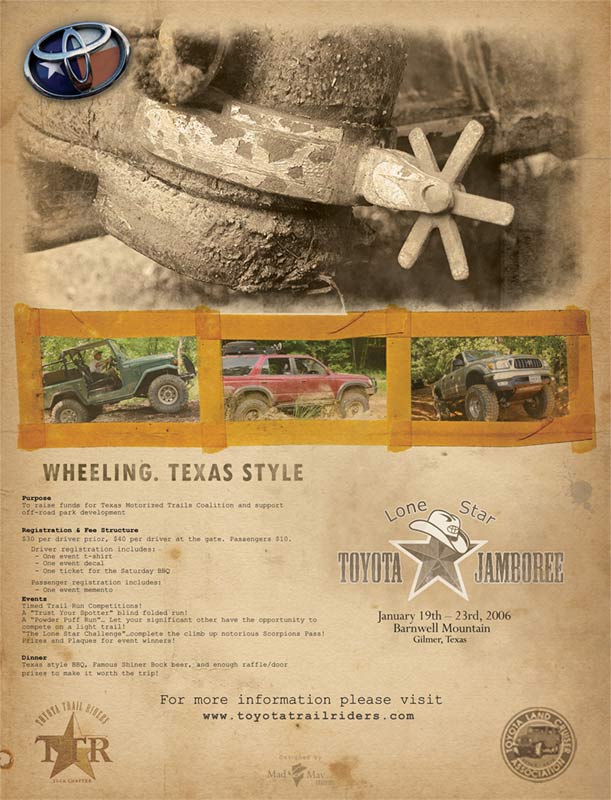