I would like to meet with people who own
BJ70s in Newbrunswick Canada area.
V

New motor for an old toyota

Has anyone considered sticking 5M GE from a Supra into an FJ40. I have some
info about that,but I would like some feed back.
Any info would be appreciated. I might even consider powering it like the Toy truck in the pic below.
Vic 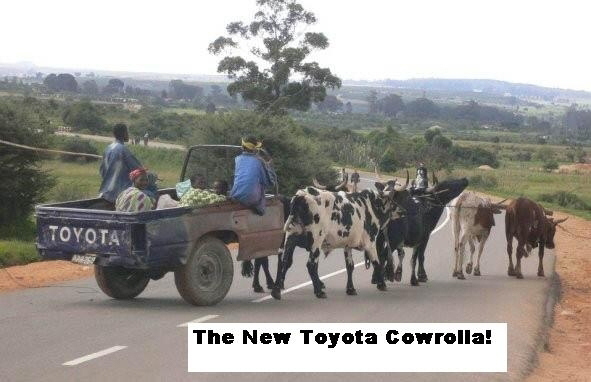 Last edited: Mar 30, 2007
I would like to meet with people who own
BJ70s in Newbrunswick Canada area.

Your picture does not load.
http://www.rockcrawler.com/forum/

The roll bar just puts it over the top. Too darned funny.
http://www.rockcrawler.com/forum/

would the 5M GE be powerful enough to push such a heavy truck?

If anyone is interested i have an 87 supra with a strong running motor, harness, also got the trans but it's gonna need a rebuild. It's all still in the car.

That Cowrolla driver needs to pick a lane!

Looks like his front end Cowster may be bad causing squirly steering??

And he needs some longer rear shackles to level the stance.

If you want an answer to a technical qustion, don't paste a funny picture into your post - especially if it's a pretty good one!

This has become a thread fo CHAT

No reason not have some laughter and ask a quetion.

Anyway from the info I gathered.
The 5M bolts to the older Toy truck trany, but the bellhousings from a supra trany is needed due to the starter being in the driver side on the 5M. Also 5M produces over 150torque.I figure that should be enough for the fj40.
This fj40 is somthing I am playing around with, I was thinking to put somthing into that is easy to replace locally. I am in Canada, (eastern ) . Not much parts for the original FJ drive train. So I am thinking of going with a whole drive train including axles from an 84 Toy pickup ( these parts I already have and easy to get around hear). Then I use The supra motor not22re for the power.
This like I said still in the early stage so I just thought I would ask.
Meantime a friend sent me that pic , I laughed so hard when I finally realized the (COWROLLA) , so I thought to share it with you and hope to make someone else laugh.
I grow up in North Africa for the first half of my life, and it wouldn't
surprise me if they did something like that.
But I think originally that truck box was towed by a farm tractor.
Anyway thanks


Vic
I would like to meet with people who own
BJ70s in Newbrunswick Canada area.
C

To answer your question, I have been considering this same swap. I have a 5MGE in a Cressida.

There was someone on Pirate 2 or 3 years ago looking into the same swap. Dont know whatever became of it. try a search for "5MGE" on the Landcruiser board.
If yer not a paying member there, do a Google for "5MGE Pirate4x4.com"

Most of the answers you get will probably be that it wont work, only because the 5MGE was not meant as a truck motor.
Comparing HP and torque numbers to an F or 2F, theres no reason I can see why it wouldnt work, other than the 5M might be a higher revving motor, so you might not get the HP and torque out of the 5M on the low end.

As to the bellhousing, just use the bell from the 5M with a W-series trans. I think you might have to switch the clutch slave to the opposite side, (I cant remember for sure which side it on on the 5M), which would mean running new hardlines.

Other than that, and making ne motor mounts, I cant see why the 5M wouldnt work.

I think someone finally figured out a cheap way to flat tow a toyota.
http://www.rockcrawler.com/forum/
V

Thanks Cracker,
I will most likely keep the lc front axle and use a centered rear axle, even though I would like to keep the rear axles too. I want to use trans and transfer and a rear from an 84 toyota truck. I have few of these axles and all the parts I need. This fj will be a daily driver and I am not really concerned so much about offroad use. I think with the 5m motor and a 5sp and
and 4.1 gear ratio It would be a good daily driver.
Thanks again..
Vic
I would like to meet with people who own
BJ70s in Newbrunswick Canada area.
8

Eastern Canada eh!, you wouldn't happen to be the Vic with the Pizza Shop in Sussex, New Brunswick?

Someone makes a centered rear axle housing that uses the LC 3rd and minitruck axles/brakes. I cant remember who it was...Someone in oregon, I think.

I have one myself I bought years ago, but havent used.

Also, one 3rd member for a spare to use front or back.

Robert. Yes that is me .How is new found land. You are lucky you have a diesel.
I am always wondering do you have the only one there?
Here is my email vicmasoud@hotmail.com
Thanks Cracker. I tried puting some stuff together using a 22r just to see how things look. I think it has to SOA setup . I think I will use the V6 rear also that was a good point. As much as I hate the rear brakes on those trucks.
Vic
I would like to meet with people who own
BJ70s in Newbrunswick Canada area.

I know a thing or two about the 5M-GE swap!

If you have any questions, please feel free to drop me a line!

I actually still have all of the stuff from my swap even though the truck is long gone - including the standalone wiring harness. Someone on here is currently thinking of buying it, but if that does not work out my stuff is fair game!

Something interesting is that the Supra has an external to the tank fuel pump that you can probably even retain the stock fuel tank!

Here is a link to my original swap -
http://www.4x4wire.com/toyota/tech/supra/

Andy
My 40 Build
My Taco Build
The family hauler
My '80s Trucks
Proud member of the Keystone Cruisers!

Man I didn't think I would get this much info,Keep it coming.
Andy , Actually I read your swap about 8 months ago, and that was where I came up with the idea to swap it into the fj40. Thank you very much that was great.
As far as buying parts, I am going to look for a whole car locally, because of the shipping cost. I have seen few in the local papers. As long as the motor runs I can do my swap with it and get everything working. Then if the motor is not that good I will look for buying a low millage one . Thank you all for your inputs, I am going to save all the info. If there is anymore, just keep it coming.
If you hapen to visit the side of the country. Newbrunswick Canada, drop by for a nice pizza pie. That will be my treat.
I see a lot of people from the USA visiting, we have very nice places to visit here, Robert would know. And some good trails too.
Vic
I would like to meet with people who own
BJ70s in Newbrunswick Canada area.
You must log in or register to reply here.

New Toyota belt is too big
2

Why are there turn buckles on motor mounts and where can I purchase new rubber mounts for motor mounts?