I am a newbie to this forum so please be gentle. My 86 FZJ80 LC threw the dreaded P0402 code – excess EGR flow. Went through the forum to glean wisdom and checked all the obvious suspects: VSV, EGR modulator, EGR valve all check out. All new hoses and vacuums present where they are supposed to be. EGR Temperature sensor has correct impedance at room temperature (have not checked at elevated temperature yet). No observable leaks at cat gasket but unsure how to test that thoroughly?

My understanding from the forum is that the VSV controls the release of vacuum generated by the modulator to regulate the opening of the EGR valve. When activated the VSV is closed, vacuum is retained, and the VSV opens the EGR valve to recirculate exhaust gases. When open (not-activated) vacuum is vented closing the EGR valve. The ECM controls VSV activation based upon inputs from the EGR temperature sensor and TPS. There are two wires to the VSV – white/blue and red/yellow which (I believe) come directly from the ECU. According to an earlier post there is power going to the VSV valve through the yellow/red wire at all times and activation is though a ground signal from the ECM though the Blue/white wire.

My P0402 means that the EGR is being opened at inappropriate times (idle when cold or at full throttle). I find that at idle, when cold, I have 12V across the VSV terminal indicating activation promoting EGR flow, which is not what I expected under those conditions making me suspect a problem with the wiring harness. I tested the voltage and impedance at the VSV connector located by the TPS with the ignition on and with the engine off and also running and got the following values: Yellow/Red – 12.2 – 14.6 V(engine running) Blue/white – ground to earth. I then unplugged the harness from the ECU and found that both Yellow/Red AND Blue/white were grounded?
This implies I have an open ground to earth to the VSV on the blue/white wire at all times, which I would not expect if the ECU controls activation by periodic grounding. A permanently closed VSV would explain my P0402 code.

Unfortunately I don’t have and FSM or a wiring diagram for the engine harness. Could someone quickly unplug their VSV lead at the connector by the throttle body and see if the Blue/white is meant to be grounded with ignition off and on when at idle cold. Also does anyone know why I would have white/yellow grounded when the ECU is disconnected? I am very confused. Any help would be much appreciated.
Last edited: Oct 6, 2019
T

Can anyone help? I don't want to cut my loom until I am sure that the EGR VSV wire is not meant to be earthed. The 4 pin connector (FZ1) is on the top of the manifold in front of the Throttle Position Sensor so is visible and easily accessible. This connector feeds the EGR VSV and the Fuel Pressure VSV and is fed by 4 wires - two Yellow/red and a Blue/white and Blue/red. I need someone to check if the Blue/white wire on the harness side (female connector - the opposite of the one being probed in the picture below) is grounded (mine is and I think it is an internal short). Should take no more than a couple of minutes if someone has the time. Thanks in advance. 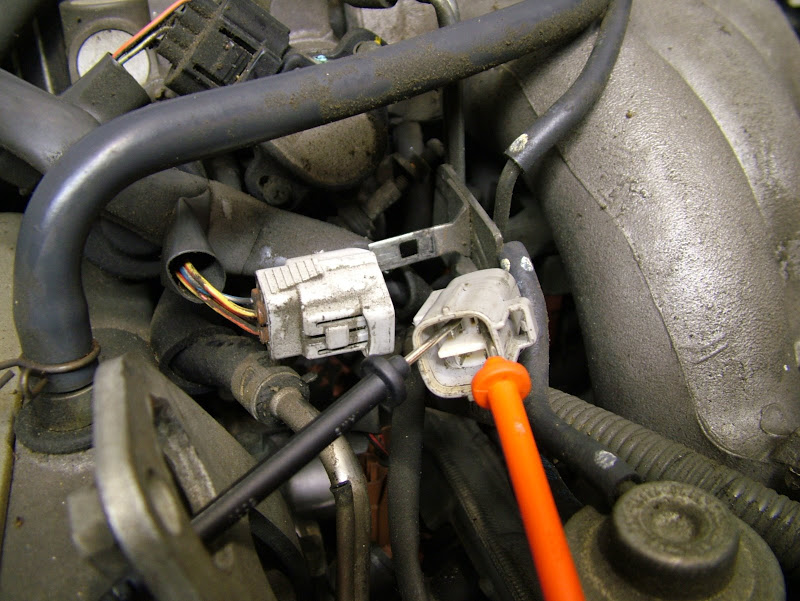 You may be confusing two different forms of grounding. You're thinking grounding to the frame I think, for a return path to the battery.

What I think is going on with the VSV is that when the wire to the ECU becomes grounded, it allows the VSV to function. Most electronic circuits are controlled by grounding the circuit, which the ECU does as needed. You may be able to get power measured on the VSV output if you ground it to the frame, but that's not the same thing as the ECU grounding it, which will explain your readings but doesn't indicate that the VSV circuit is compromised.

I'd be patient here until someone with more expertise in this area than I have can comment. Don't start cutting anything IMO just yet.
T

Greentruck -thanks for the reply - much appreciated. Yes I am grounding to the chassis in this test. What I don't understand is why I have ground on the EGR VSV Blue/white wire under all conditions even when the connector is removed from the ECU. This would imply that the ECU does not control activation by grounding. Conversely, the blue/red wire going to the Fuel Pressure VSV in the same connector is not grounded - which I assume is the correct condition if it is controlled by grounding from the ECU. I would expect both VSV's to be controlled in the same manner.

Here is the FSM on the testing

EWD for the VSVs 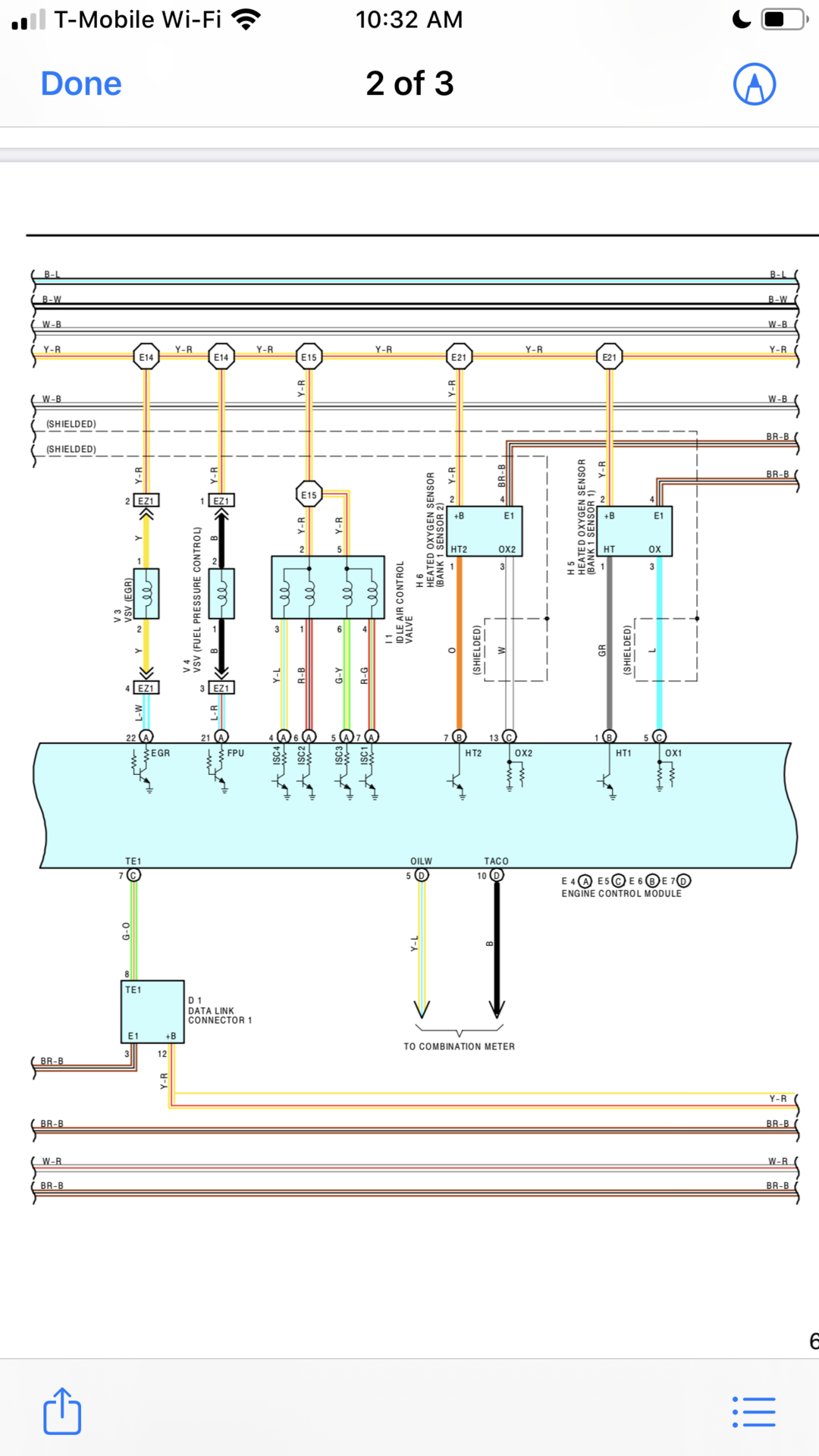 Hi NLXTACY - thanks for taking the time to send me the FSM test procedure and the wiring diagram. I went through the FSM tests as shown and everything checked out. The VSV, EGR, modulator all operated correctly. That is when I started looking at the wiring inputs. What I think is the problem is the wiring going to the VSV is shorted and earthed internally somehow, activating the VSV under all conditions, throwing the P0402 code. According to the wiring diagram you sent me the Blue/white wiring goes directly to the ECU without any splices. Consequently, when the connector is removed from the ECU the wire should not be earthed. - which mine is? That is why I was hoping someone could quickly confirm that it should not be earthed on their rig. Thanks again for the info.

TLCneeded said:
SNIP...(per NLXTACY) Consequently, when the connector is removed from the ECU the wire should not be earthed. - which mine is? That is why I was hoping someone could quickly confirm that it should not be earthed on their rig. Thanks again for the info.
Click to expand...


Very helpful from NLXTACY as always. Here you need to do more checking. Is the other end grounded by it's connection? But if you take it loose, then you can check if it appears grounded from that end, just the wire that is. Because if it's no longer grounded at the other end, then it's not a compromised wire, but something else in the system.

To do that, you'd need to trace the other end through which may involve taking connectors loose that one need be very cautious with on a two-decade old vehicle. In the process, visually inspect and you may find the issue that way without needing to take things apart. If that doesn't solve, then it may be a bad connector, which you'll need to check as you go.

However, I suspect the wiring is OK unless it takes the path over the back of the valve cover near the firewall, where the heat is known to cook the EGR, etc wiring IIRC as the first most obvious place to look for physical compromise as you trace the diagrams.
T

Hi Greentruck - I have continuity in the VSV EGR wire from the ECU end to the VSV connector FZ1 - so there is no break. However I also get continuity with the chassis ground when I test from either end (ECU or Connector side). That doesn't seem right.

The wiring loom is all original and runs from the ECU through the firewall, along the firewall, under the heater valve and then does a 90 close to the EGR and runs beneath the throttle body along the fuel rail to emerge the other side by the VSV connector. I looked for signs of heat damage (externally) and it seemed OK - although it may be bad inside.
T

PROBLEM SOLVED: Took the throttle body off and saw where the loom had been chafing. It was underneath and hidden - very cryptic. Only one short - as predicted - the Blue/White wire going to the EGR VSV. Will run a new wire from the ECU connector which should solve the problem. So to add to the list of things to check if you find you have a P0402 - make sure your VSV is not permanently ON when ignition is on due to a wiring short. Thanks to Greentruck and NLXTACY for their help.

Glad to hear. Sorry I’ve been knee deep in my own projects

You were a great help - the wiring diagram you sent solved it! Until then I was not sure if it was a straight wire run from the ECM to the VSV. This is an awesome forum. Best wishes for your projects.
You must log in or register to reply here.