I'm new and wanted to say hello. My name is Kevin Sluder and I live in Houston, Tx. Looking forward to exploring the vast collection of Cruiser knowledge here. I restored a 1978 FJ40 in the mid 90's. Purchased it here in Houston but it was from Louisianna originally. LOTS of rust in the rear and all the usual places. One of my best friends( in cruiser heaven now) was a body man and helped with all the difficult metal work and painting. We worked for 6 months repairing rust damage on some weeknights and most weekends in that period. I was working full time and going to the University of Houston at night. Not married then of course! but lost a couple of girlfriends during the first phase of restoration HAHA!

This cruiser was all original and had the hardtop. The original 2F ran well and did not smoke. I put a rebuilt carb on it and had to resurface the manifolds to get them to seal on the block but overall it was in good shape. The Transmission and T-case were professionally overhauled by Off-Road unlimited here in Houston.

Enjoyed my baby for several years and had to sell in 2003 due to job loss. Cruiser fever has set in again and I'm looking to get another project going. I'd like to get another '78 because of my familiarty and documentation that I have from the first project.
Been looking on the net and locally and have found a few. It will probably be about six months before I'm ready to lay down some cash, but thought it would be fun to see whats out there. Id prefer something original and unmolested but I'd really like to keep the metal work to a minimum. Oh, I forgot to mention that I had the frame and body tub, hood, fenders, etc. acid dipped and stripped to bare metal. Had this done in 1993 and passed by the facility that did this recently and they were still there! Contact me if you would like the ph number. I can't tell you how nice it was to do the metal repair work starting with a clean slate. Anyway, The undercarriage was completely cleaned and primed and painted. Lookin' forward to getting another one underway. 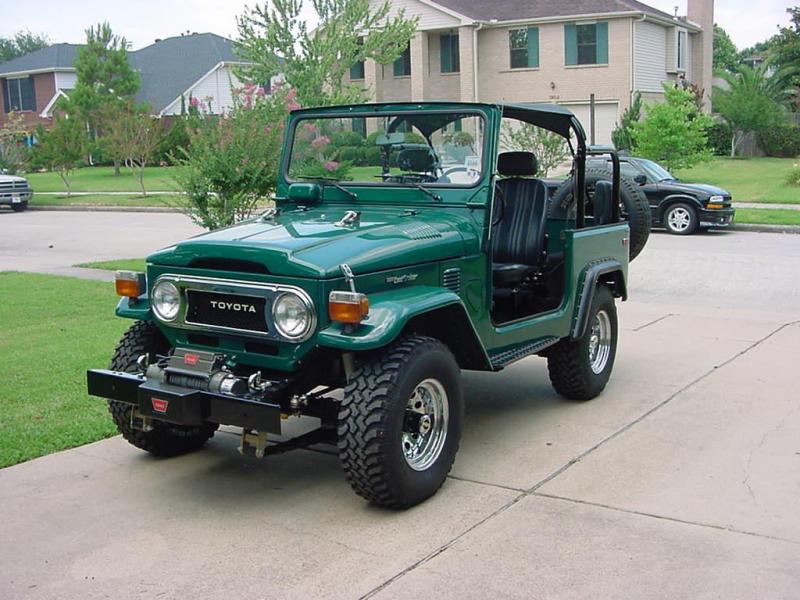 im in north houston, it looks like you can help me more than i can help you, but i have a 75 im re-building right now. frame is sitting on the trailer. body needs about $1200 in rust repair, just picked up a 86 2f a couple weeks ago in dallas, im putting in it. picked up a rust free top and ambulance doors about 3 or 4 weeks ago in downtown from a fellow member.

your old rig looks sweet and very well built, mine right now is about that same color.

That is a sweet ride. I wish you luck in finding another one to bring back to life...

Hello there and welcome to the Mud

(official welcome salute). I love the looks of your old '78 - some debate that this is the best year of cruiser. I had one the same color and same year.....it was my dad's "baby" and he let me drive it when I turned 16 (big mistake). I promptly drove it way too fast out on a dirt road and rolled it. Ooops.....

Take your time finding a new rig to work on.....the economy is forcing a lot of people to sell their vehicles and prices are getting pretty good on some of them. You should be able to find a good, rust-free 40 for a good price. Be patient....


Be sure to use the FAQ section. There is a ton of usefull stuff in there that people have taken the time to post up.

Cruisers are very similar for a lot of years.... I wouldn't worry about getting a 78. If I were to do it again I'd get a 76 or newer with disc brakes or possibly a diesel for its fuel economy. 79ish started having OE power steering which could be nice.

Welcome to Mud. I hope you find what your looking for. Your former Cruiser looks awesome.

heres a good one for ya classifieds - craigslist

Nice
You must log in or register to reply here.