Hello Everyone! I've been perusing around here for some time, and finally feel like a part of the 'club'. Santa (my wife) bought me a sled for Christmas. She's a 1990 Land Cruiser FJ62 that we are lovingly naming Bertha. We've been on the hunt for an FJ60/62 for a long time, but wanted to find just the right one... She popped up on Autotrader, and after inquiring, we were lucky to get the call from the seller (who lived 13 minutes from our house...).

The good news: she's in good shape. The previous owner had her for about four years, and within the last year, he did some extensive work to the engine and put in a new transmission. She runs well. He also had a thorough inspection through ACC Garage in Atlanta and there's a healthy list of stuff to do. Not that any is an absolute need to get her on the road, but things that we'll eventually tackle. I'm planning on going down and reviewing the list with the team and work out prioritization.

There are a few things that I'm going to get done ASAP, mostly around safety so that I can start bumming around town:
She also needs a serious cleaning inside and out. I'll start tackling that here shortly.

After that, there are a few rust spots/paint gouges that I need to address. I am a HUGE fan of the two tone paint and will keep it. I'm not looking for Bertha to be showroom quality, but I do want her to look as clean as possible.

Needless to say, my wife and I are over the moon excited. This should be a great adventure for our family.

Here is the official 'Before' photo tour: 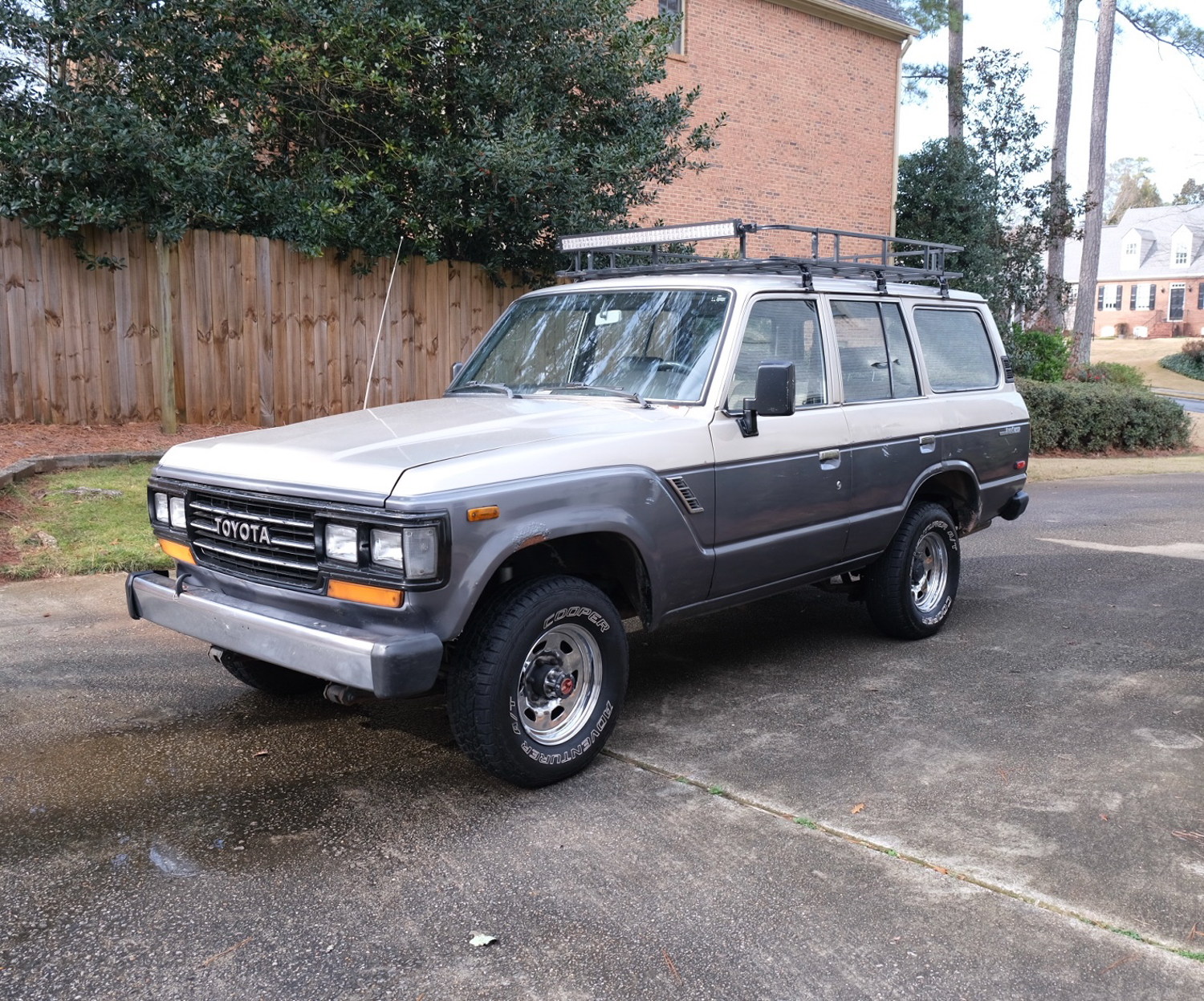 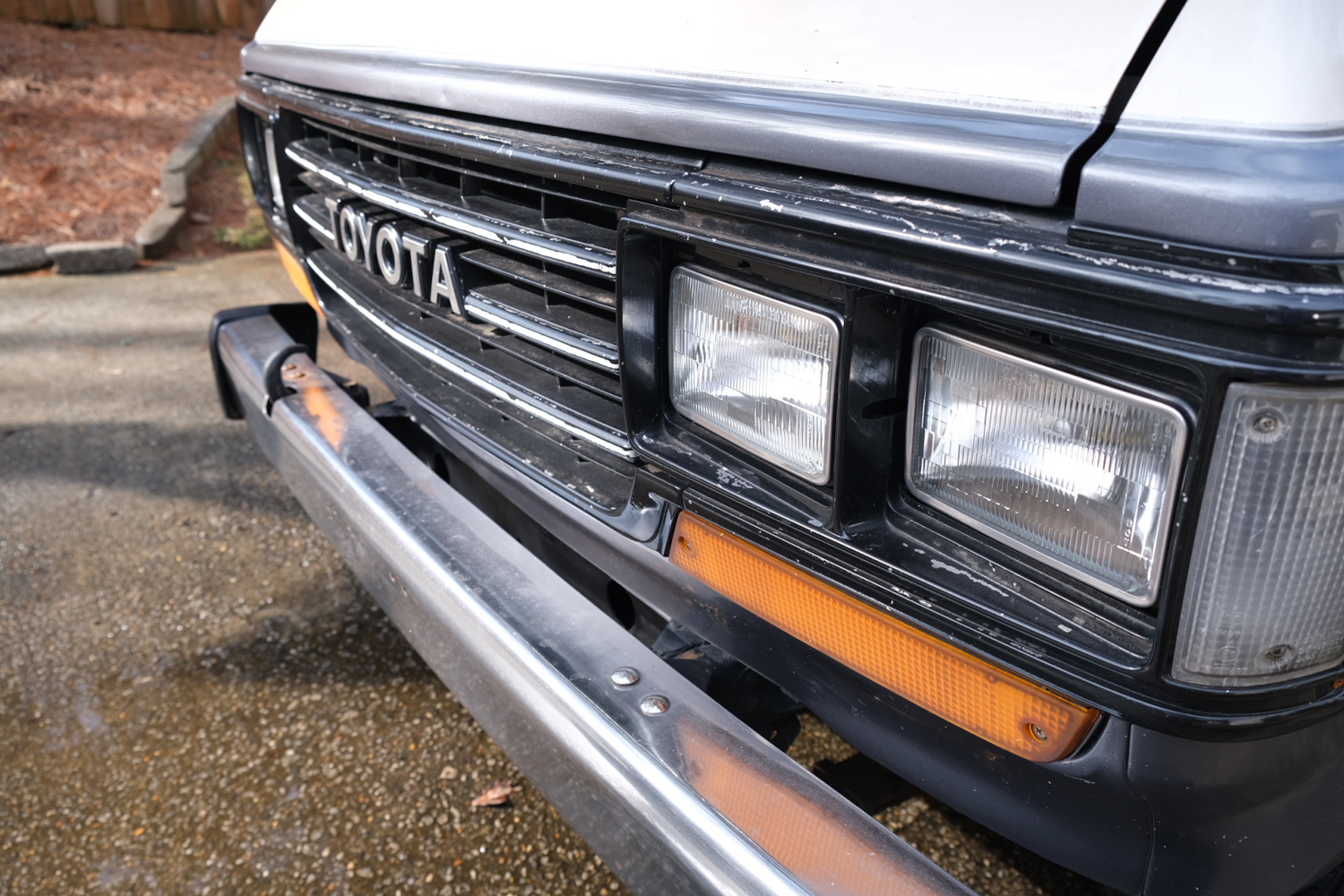 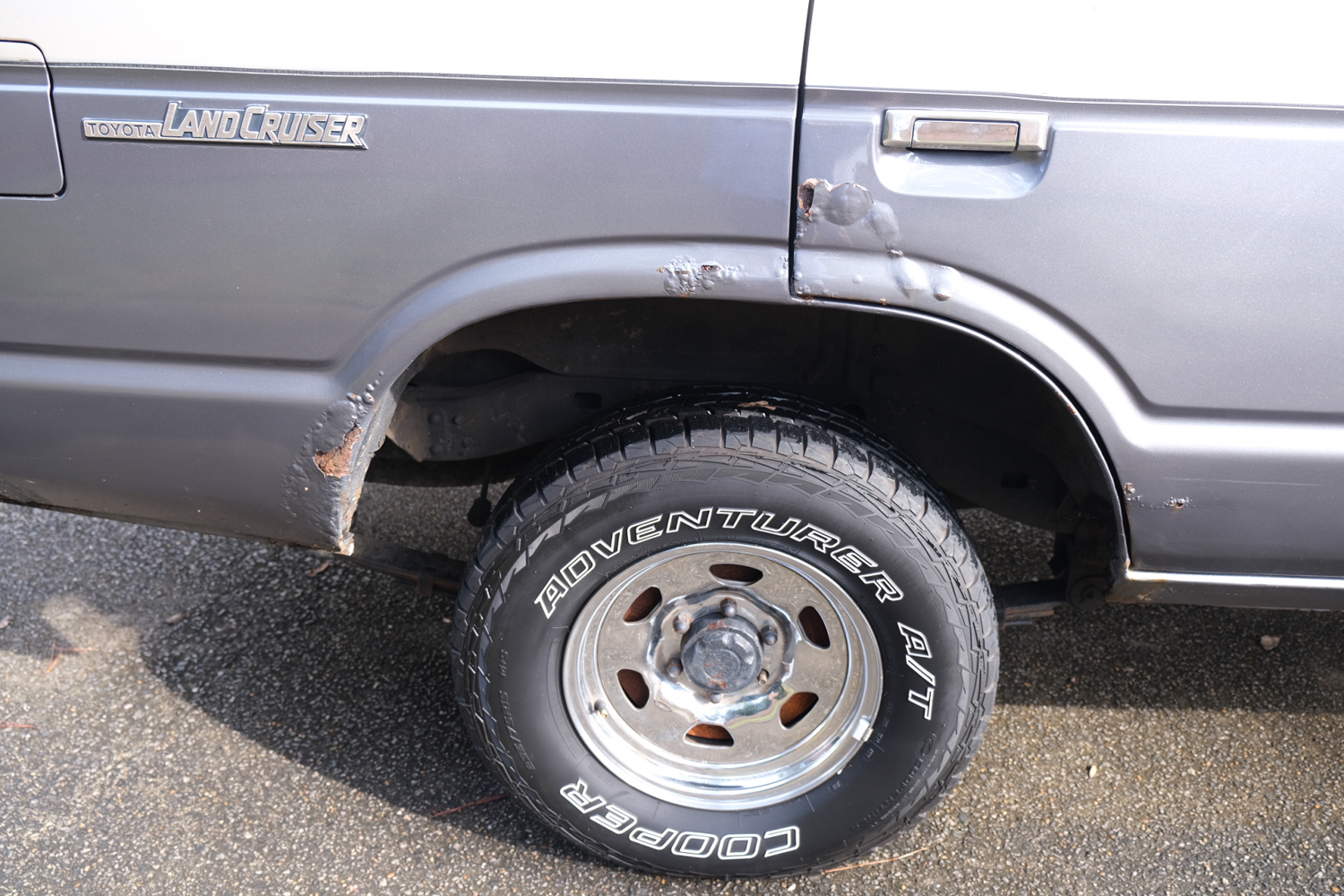 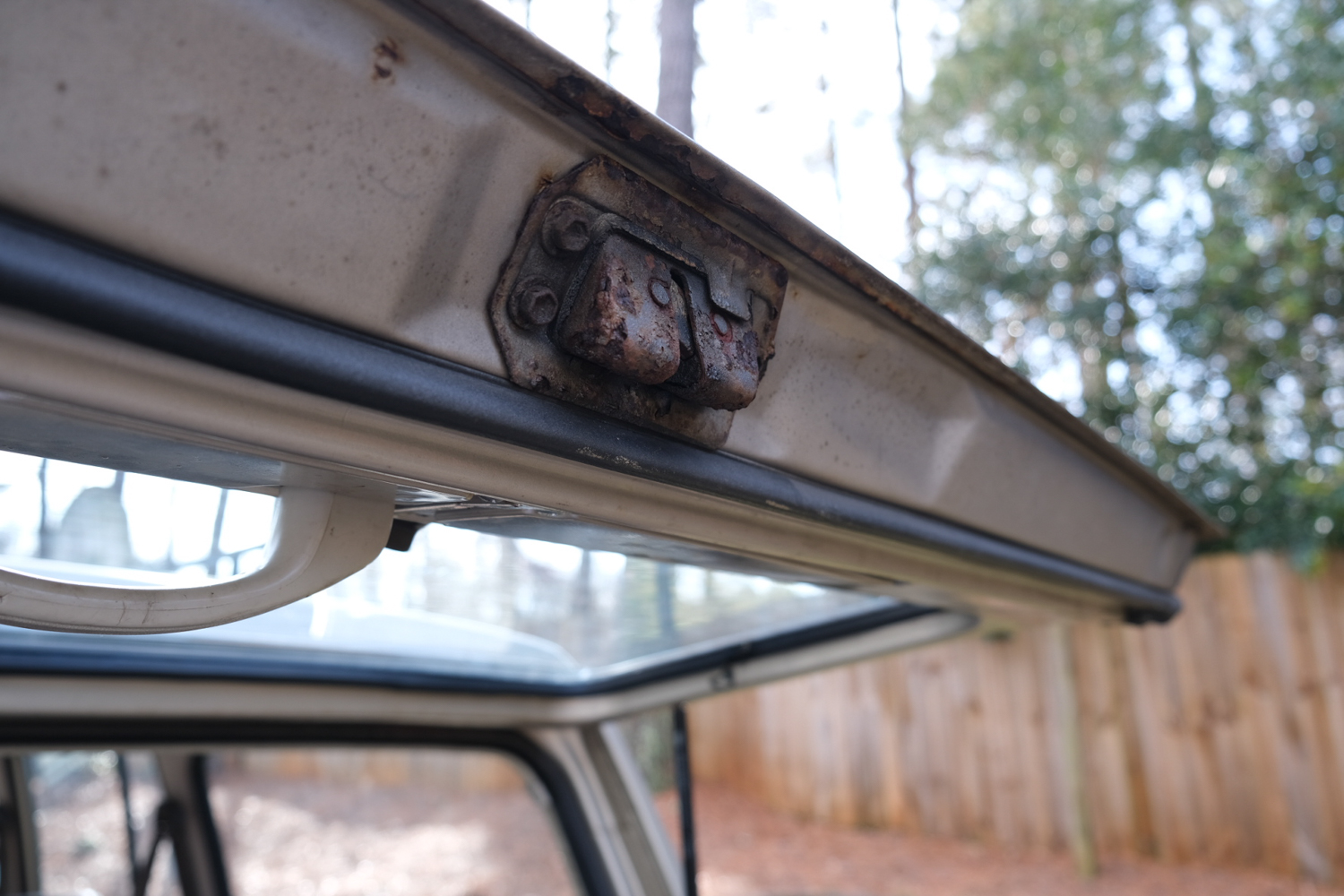 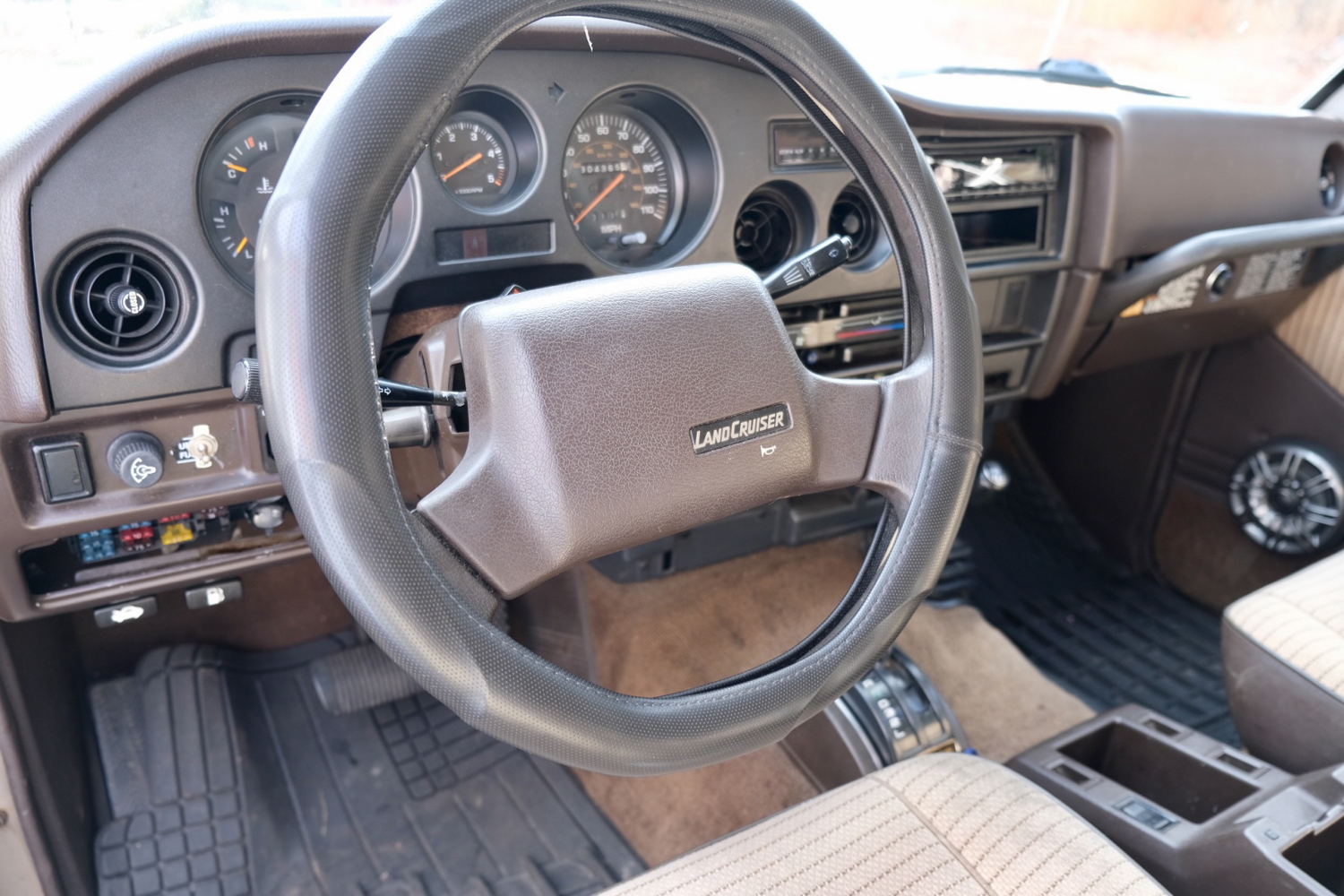 Congrats! I Santa’d myself into a 1989 (and a 1988 donor truck) the week before Christmas too. I feel like they’re special needs children when troubleshooting electrical gremlins but so worth the time.

Sweet rig! You and your family are going to have many good adventures. My four year old loves wrenching and working on the cruiser with me. Our LC is pretty new to us and has been a game changer already.
K

hello bertha, oh n you too jr. welcome aboard this crazy train rockin' down the rails through the nite. let me be the 1st to give the official welcome

you will find a wealth of info in here, just gotta mine for it

Welcome to the rusty FJ62 club!

Not to alarm you, but someone's done some previous work on the fender. The wheel arch has been enlarged, perhaps to delete some rust (see the areas I've circled). Hopefully the repair has been done well, but at any rate I noticed that it does not look stock so I thought I'd point it out. 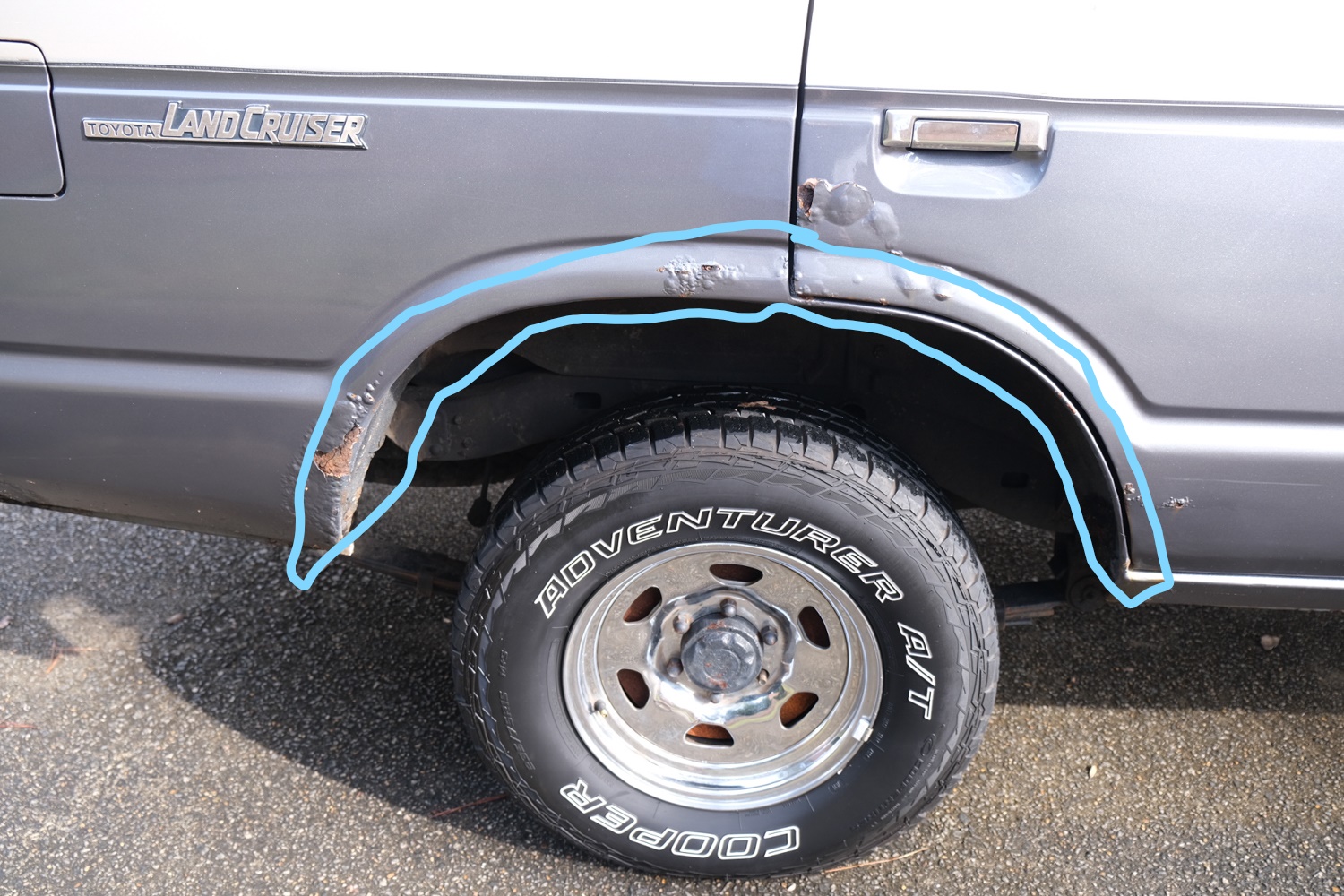 Not to alarm you, but someone's done some previous work on the fender. The wheel arch has been enlarged, perhaps to delete some rust (see the areas I've circled). Hopefully the repair has been done well, but at any rate I noticed that it does not look stock so I thought I'd point it out.

Yeah, I figured. I’m going to have the rust taken care of in a month or so at a (very) reputable shop. Thanks for the look!

I thought I'd share an update. Lots of good stuff happening with the old girl.

1. Tailgate Lock: I fixed it. Took some elbow grease, a wire brush, and some WD40 but we are in business.
2. Exhaust: The previous owner's advice was to 'get the muffler looked at'. I found a GREAT shop near me and brought it up. Everything was original up to the manifold and essentially rotted out. CO2 was leaking into the cabin, which made an immediate fix a no brainer. I had the exhaust system replaced, and am very happy with the results. She's much quieter, I'm getting better gas mileage, and it feels like she has a little more power, especially in lower gears.
2. Door Locks/Interior Lighting/Headlight Upgrade (Systems): I've been calling around to a lot of local places, and most of them don't want the work, much less give me an estimate. Turns out the previous owner had a full analysis done on her back in 2018 by ACC. I have the paperwork and decided to give them a call. I spoke to Jennifer for 45 minutes, and it was a fantastic conversation. I fully understand why ACC has the reputation they do. Anyway, most of the work I need to be done was identified by ACC back in '18. Heading to see them in February to have the door locks replaced, the interior lighting upgraded, as well as the headlights changed out to Hella H4s. We're going to go ahead and do the AC/Heating since it's kaput as well, and I'd like to have it completed before it gets too hot here in Georgia.
3. Rust: I'm in the process of getting quotes for the bodywork. The first appointment is tomorrow with a local shop that I vetted for ~30 minutes. They do a lot of work on older SUVs - they just did a Wagoneer that looks fantastic. I'll report back, Atlanta folks. Got a few others I'm lining up as well. Looking to get this done in the next couple of months.

Other:
- Ordered the Dome/Cargo light LED conversion kit from Old Iron. Got a new dome lens cover from Cruiser Corps. Going to work on that this weekend.
- Ordered a new steering wheel cover from Wheelskins. Looking forward to this...should be much more comfortable vs. what's on there now.
- Need to order new front speakers. I know the depth is an issue, so options are limited. I will attempt to install these once they come in.

Otherwise, we've been enjoying her quite a bit! Super fun to drive and the kids love riding around in her. I've been so appreciative of the help from everyone here. It's such a great community... The adventure begins!

Welcome to the community. I’m pretty new here also, and as you know, there’s more knowledge here about our rigs than anyplace.

the more you’re willing to take on yourself will definitely make this journey less expensive and potentially more enjoyable.

I’ve learned a ton here, have taken on projects I’d never imagined and have come out the other side enjoying my 60 more than I’d ever thought.

will be curious To hear back the diagnosis on your AC and Heat situation. Hard to imagine there weren’t some earlier attempted fixes for AC given your climate.

best of luck. I’d talk to @ToyotaMatt about the LED headlight conversion. Worth investigating

Time for an update. Been a couple busy months for Bertha, as we are getting her road-ready and cleaned up. Here's what we've done since the January update:

I took her to her first spa day at ACC Garage, and had the following done:
- New AC compressor and intake
- Got all the door locks replaced
- New LED headlights
- Tried to straighten the steering wheel, but it's still a little slanted (we're going to work on it next time I bring it in)

They replaced all the interior/gauge lighting, but it turns out the switch is bad. No biggie - most of the bulbs were burnt out. ACC was able to find a new switch, and we'll replace it next time I bring it in.

Before my visit to ACC, I found an oil leak, so I had them diagnose. Turns out it's a bad side cover gasket. They've found the part, which is super cheap, but the labor is high since it's a maze to get to it. Also, I spoke to them about my sound system/Bluetooth/etc. ACC offers a full restoration where they replace the head unit, all the speaker wire and components, insulate behind the speakers, and use brackets that allow for better/deeper speakers in the front doors (not depth limited) and cargo area (6x9 speakers vs. 6.5" round speakers). We'll have a couple of mics installed for hands-free Bluetooth and it should be fantastic sound quality. Add in the dimmer switch installation. We're working on getting this scheduled now.

ACC gave her a good report card as far as the engine and the frame. I think I have a guy that's going to take care of the rust, but I haven't gotten on his schedule yet...anyone have a good rust guy in the ATL area?

- New Battery. Didn't realize how weak the old one was...
- Installed the Dome/Cargo LED light from Old Iron. Man what a difference. Worth every penny.
- Installed the steering wheel cover from Wheelskins. It took about an hour to install, but it is great. If anyone is looking to add one, my advice is to pull the string TIGHT. The tighter the better. Mine essentially has no give. Tight as a drum. Here's a picture: 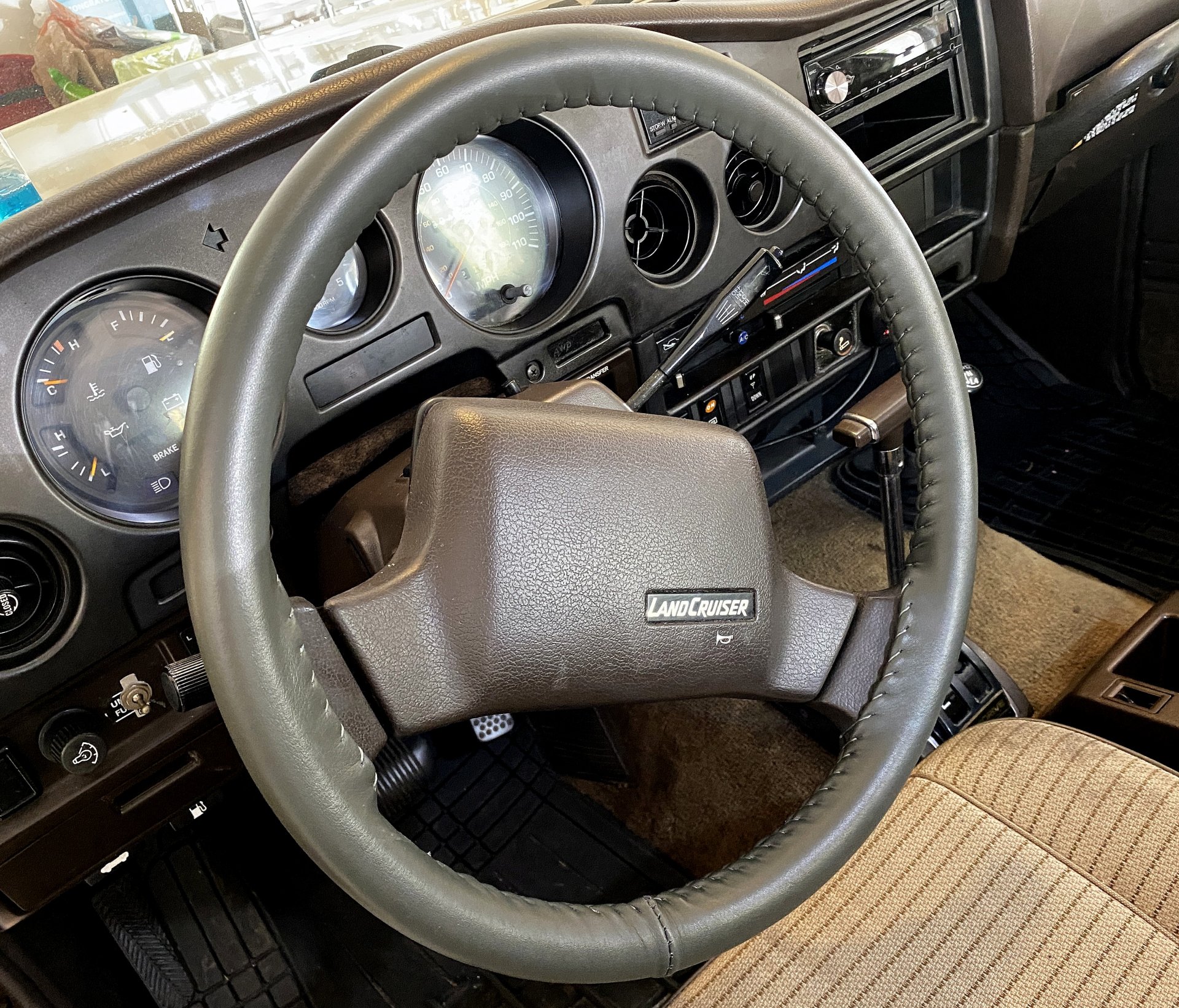 Lastly, I did a pseudo restoration of my console top. Thanks to some nice folks here, they pointed me in the right direction to clean the top and paint it with SEM vinyl paint. Here are the before images: 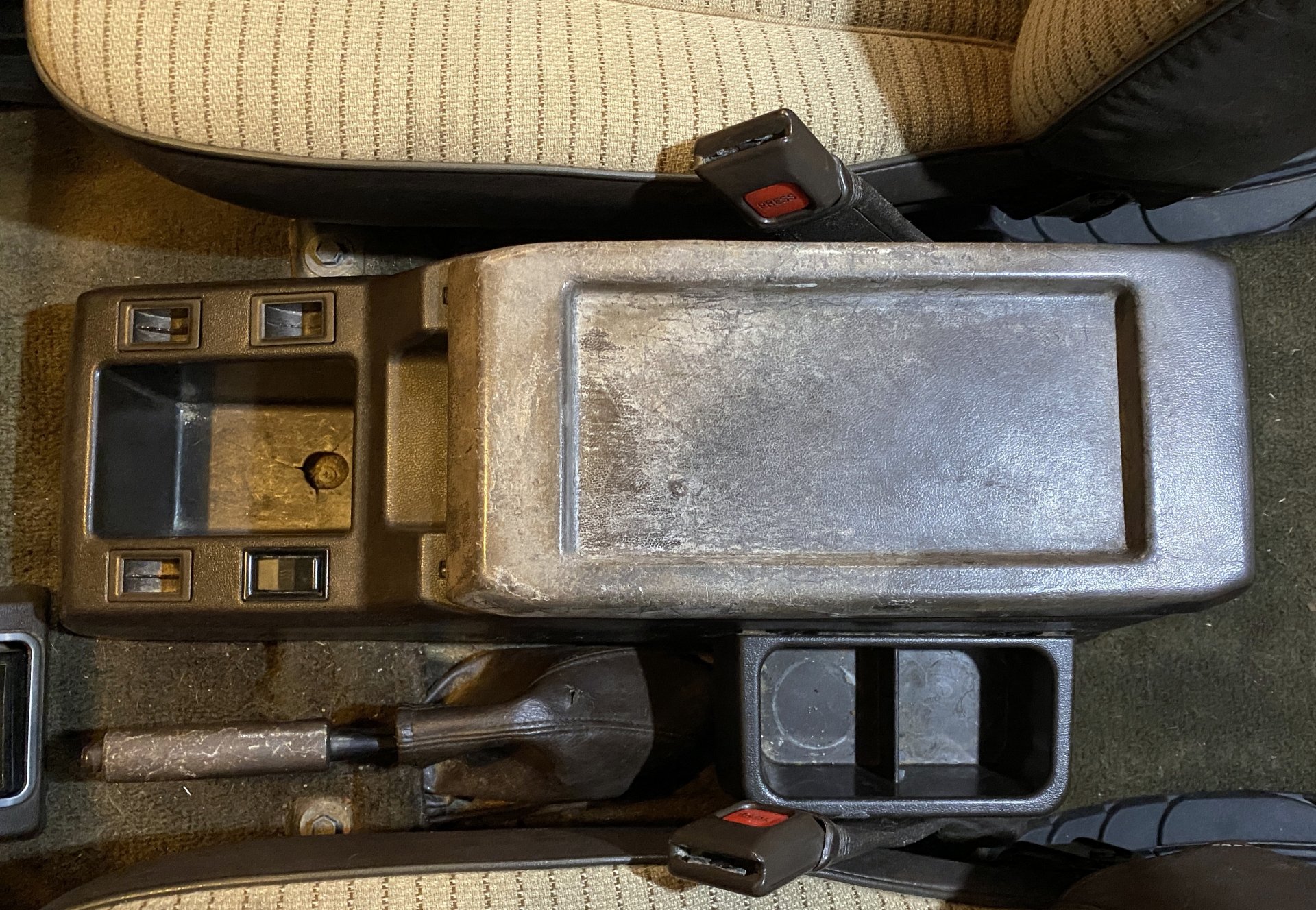 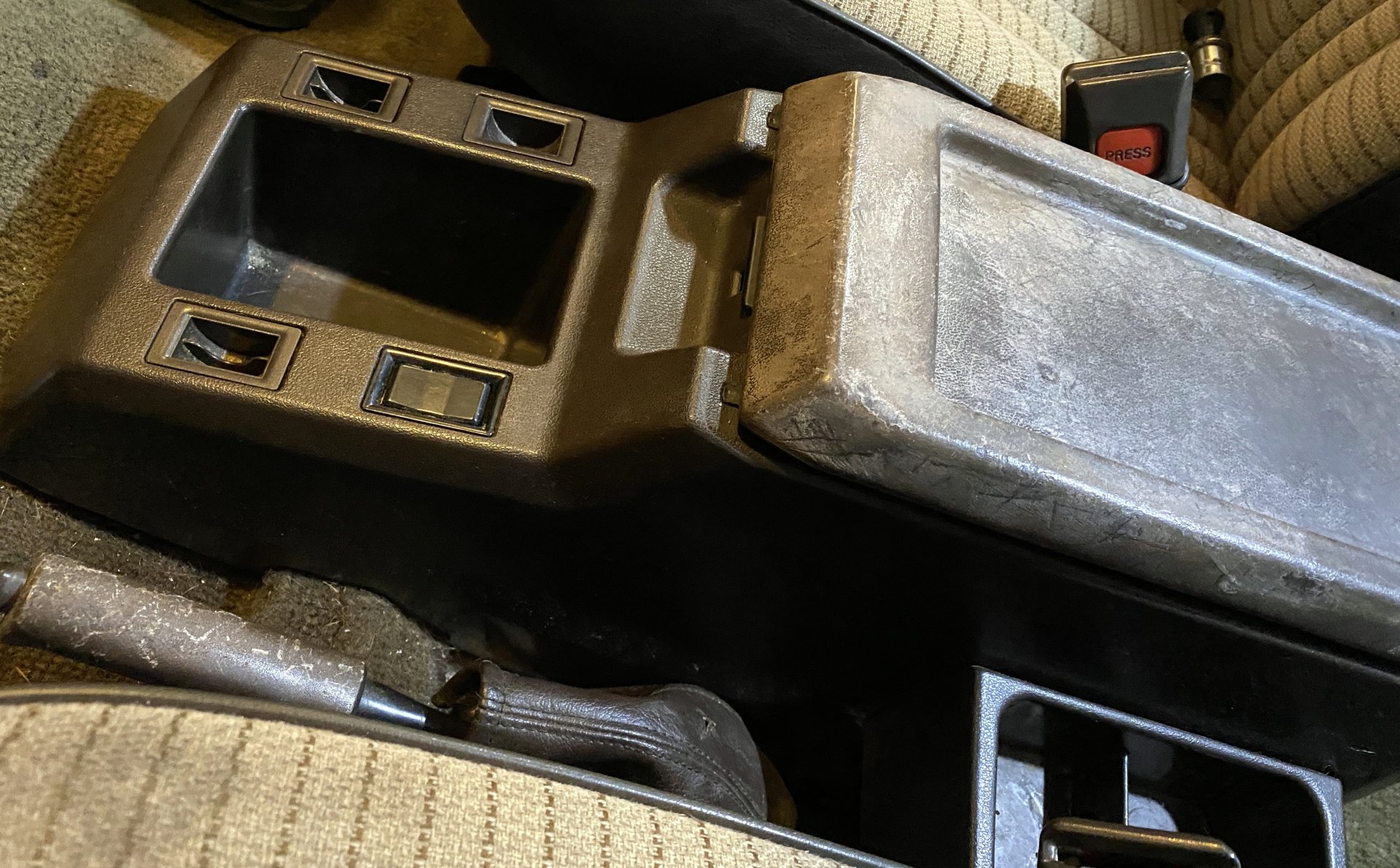 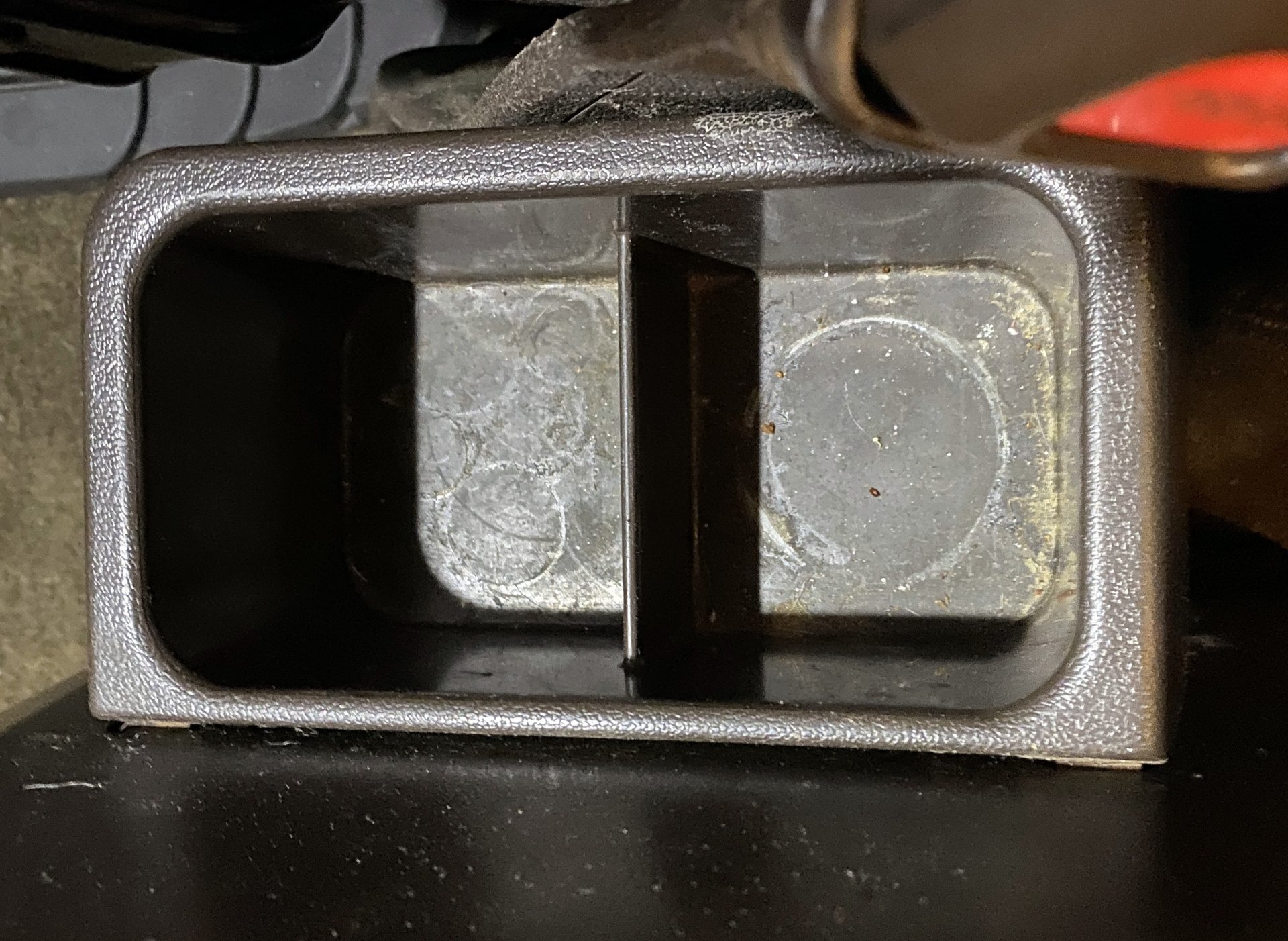 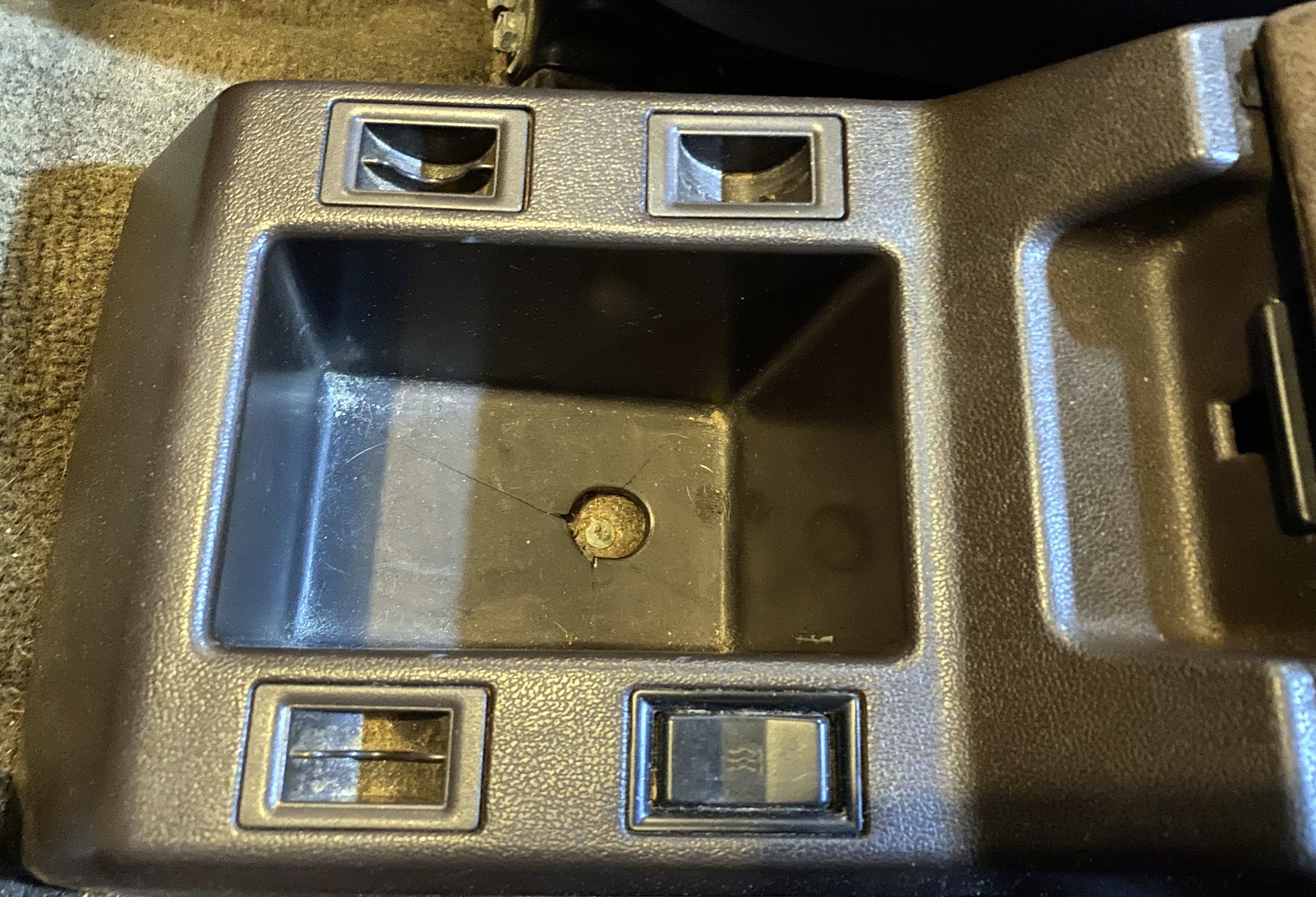 Generally speaking, the console was really dirty/dingy. I used some Krud cutter on the console top and a TON of elbow grease. After I scrubbed it as much as was effective, I used some fine-grit sandpaper to get it to a good place to paint. I did three coats of paint, and probably could have done a couple more, but I like the matte look. In addition, I cleaned the hell out of the console itself. I used the Krud Cutter, then used an interior restoration cream...the plastic really soaked it up, so I did a couple of coats. It probably would have been easier to remove it and clean it, but oh well. It really looks great.

Lastly, I ordered a couple sheets of silicone to line the bottoms of the cup holders and the console. Very cheap on Amazon: 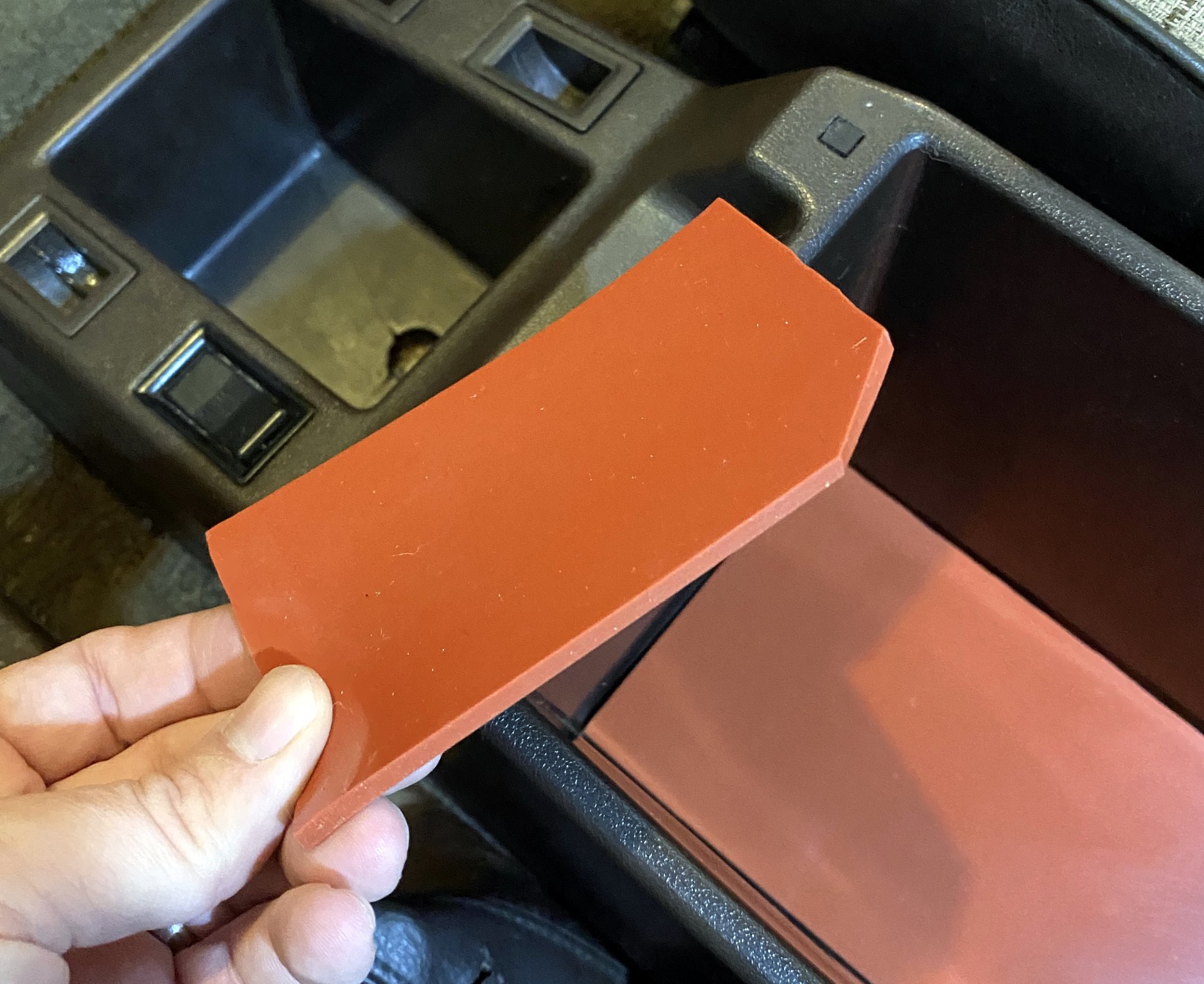 Here are the 'after' pics of the completed console. You'll see that the paint is maybe a half shade lighter than the rest of the console...I'm fine with it: 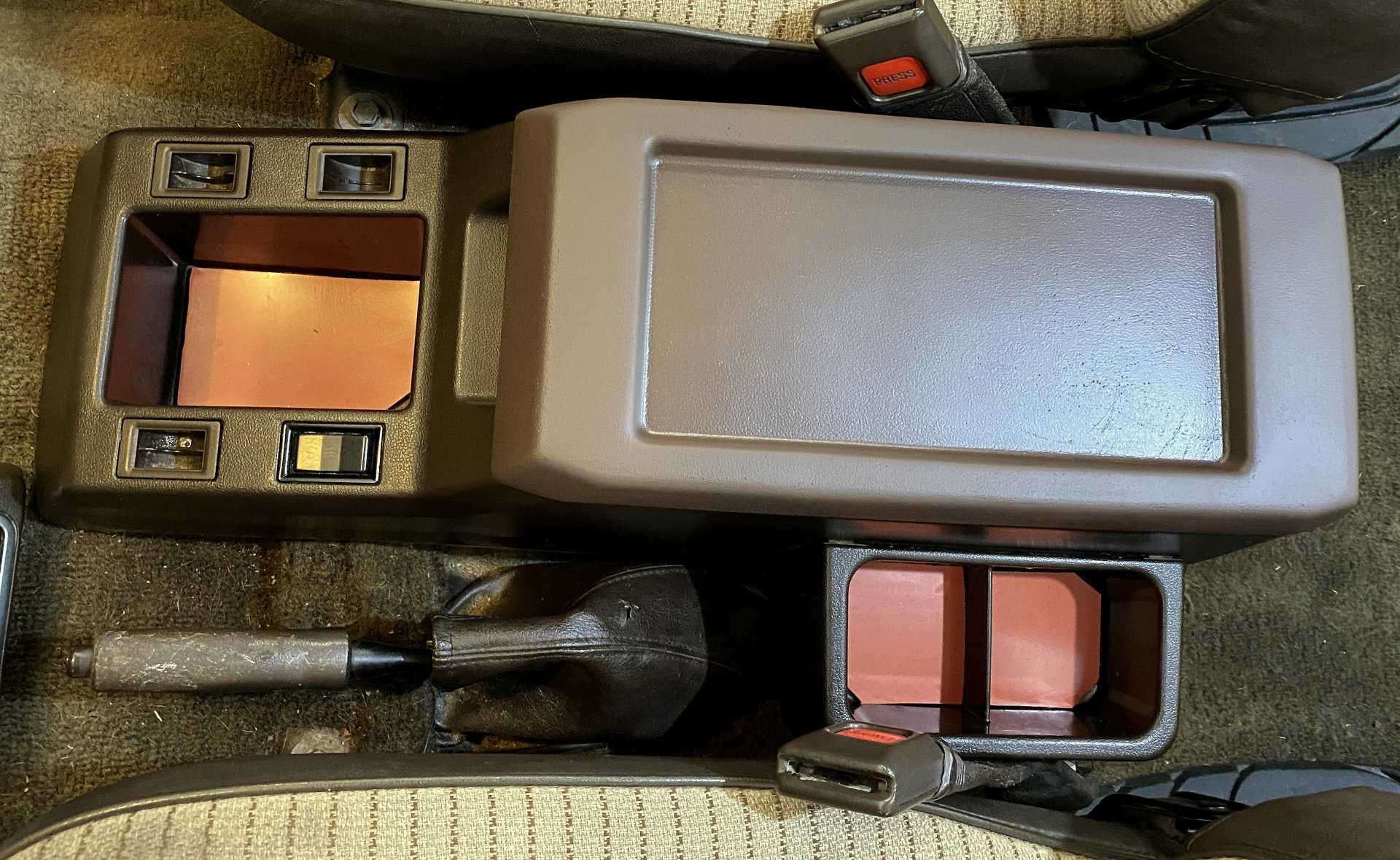 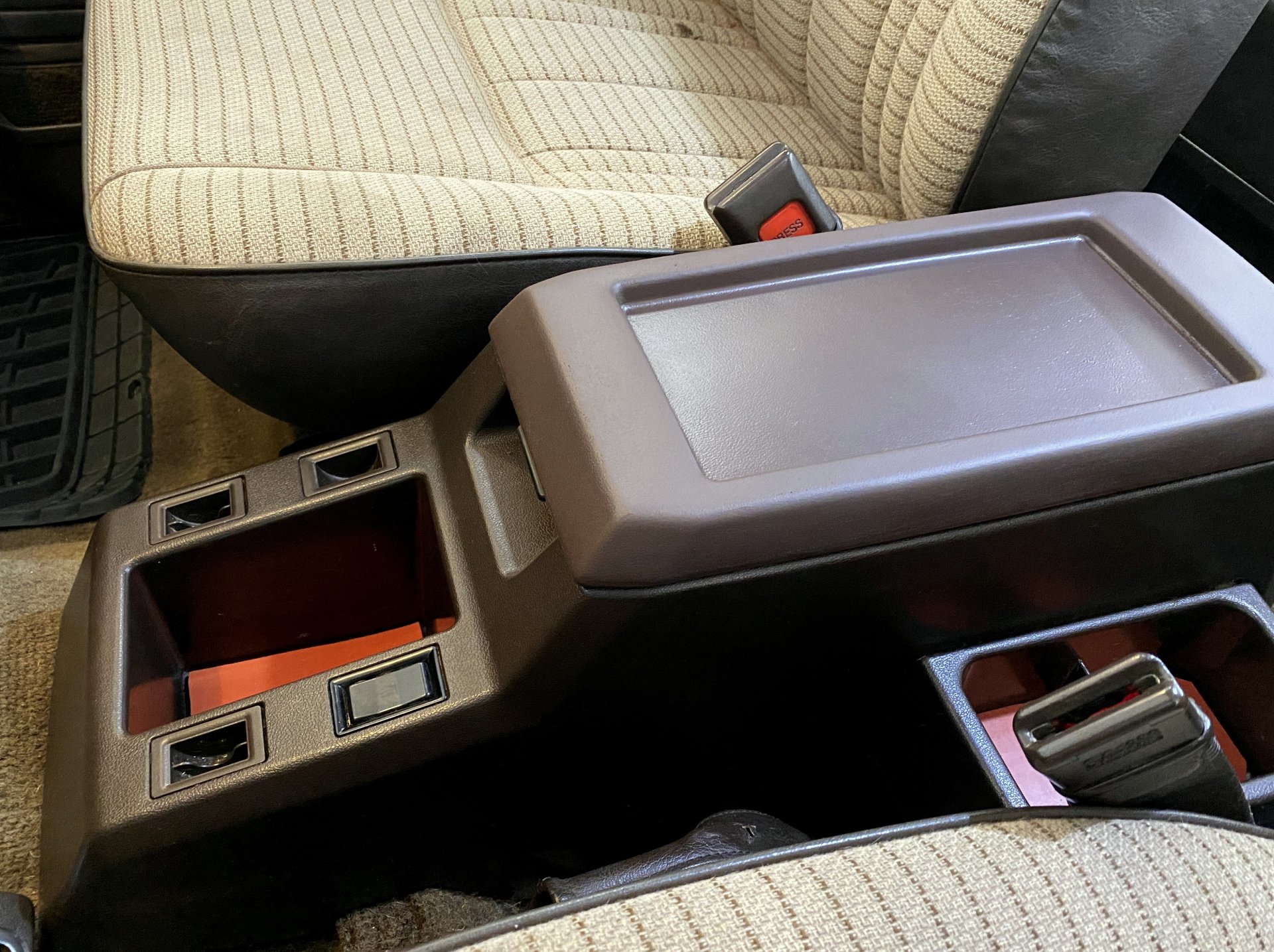 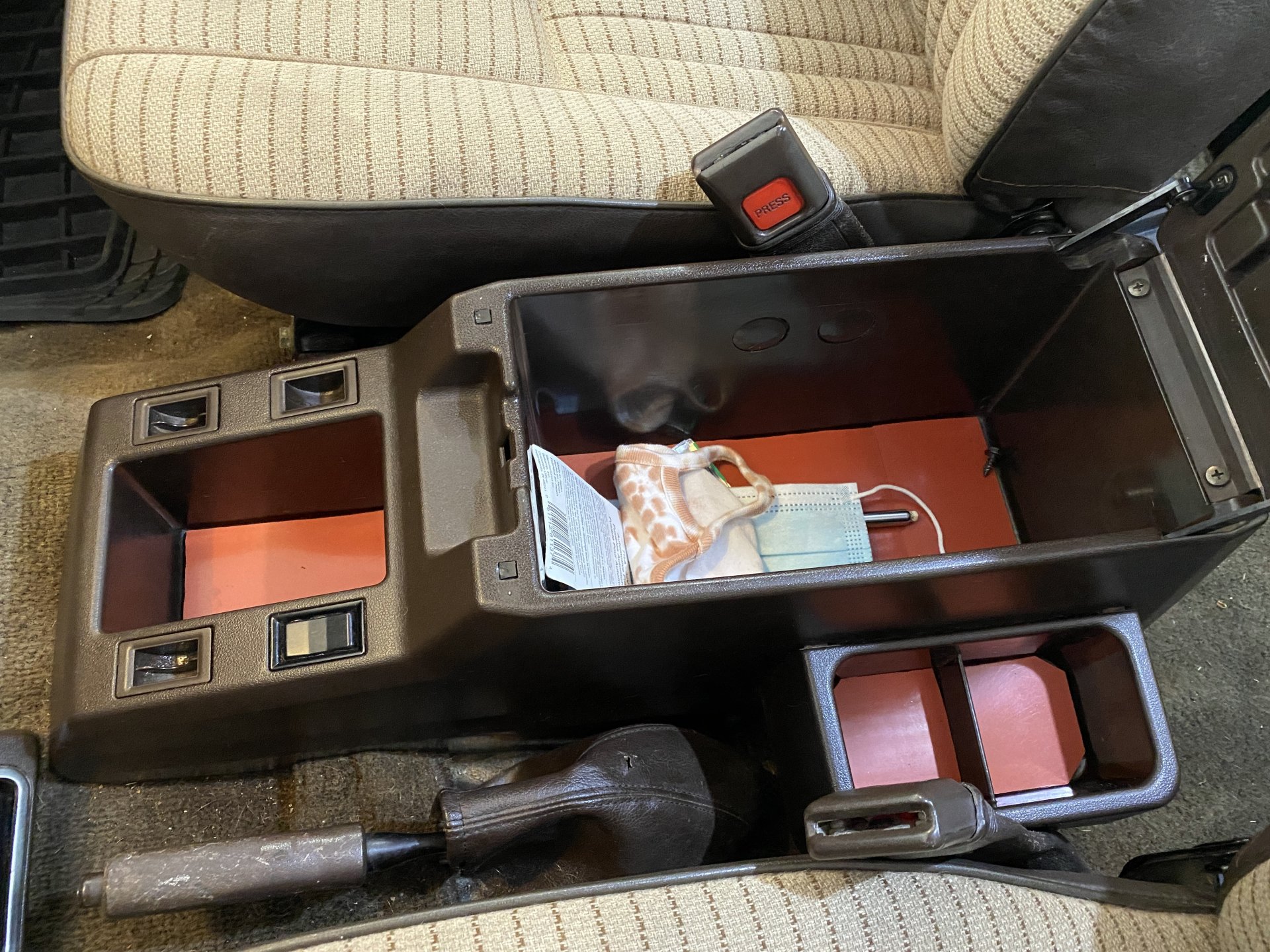 I'm planning on doing the rest of the interior this weekend - including the emergency brake handle, and giving her a serious vacuuming.

You can change the angle of the steering wheel either by adjusting the length of the relay rod (can turn into a lengthy and painful process) OR you can pull off the horn pad, get a 19mm wrench on the nut that holds the steering wheel on, disconnect one ground wire, yank the wheel off (might need a puller if it's really stuck on there). Then reinstall the wheel so that it's straight. Should take all of 5 minutes.

jrs002 said:
I'm planning on doing the rest of the interior this weekend - including the emergency brake handle,
Click to expand...

Did you restore that e-brake handle and have tips you want to share?

WoodnotRust said:
Did you restore that e-brake handle and have tips you want to share?
Click to expand...

Not yet - but I will. And I'll share what I did...
You must log in or register to reply here.