So my brother just bought his first truck about a week ago. He Loves my 40 but wanted something a little more for expedition's....so not a 40 series. We chose this 1990 62 that has been for sale for awhile, it has some issues but we picked it up for pretty cheap. The first thing we did was strip the whole inside and cleaned it. We both took this week off to start working on it. So yesterday we built the rear storage box which came out sweet for $60 bucks worth of material. Today we worked on the rear bumper....
Here are some pics

I thought i took more pics of the box while we built it but i guess i didnt. The back of the box is open where ill eventually put drawers if i dont like having it just open. The front of the box near the back seat has a lid and a nice size compartment to put recovery gear, etc. If any one want more pics of it i can take them. 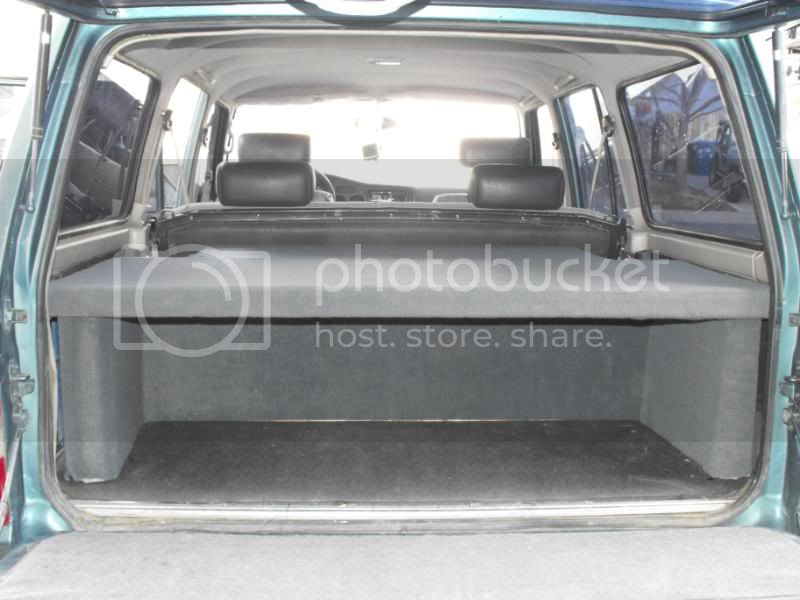 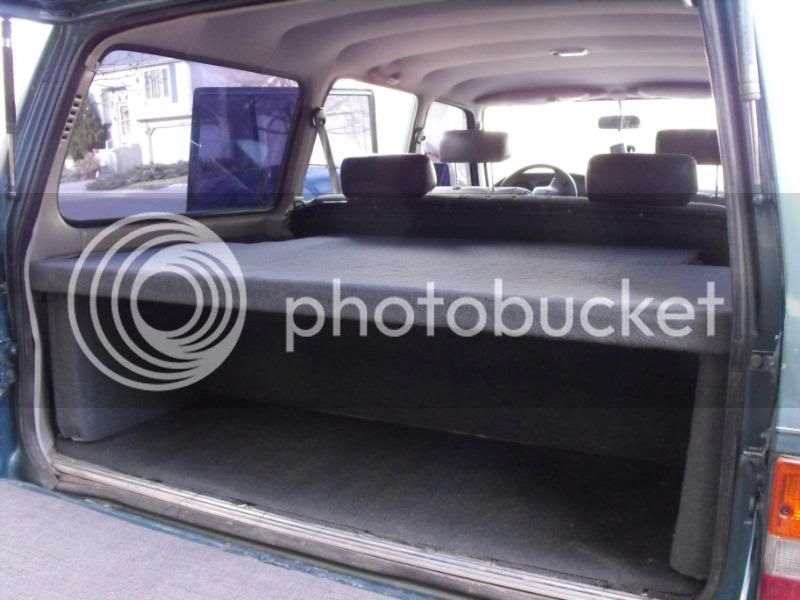 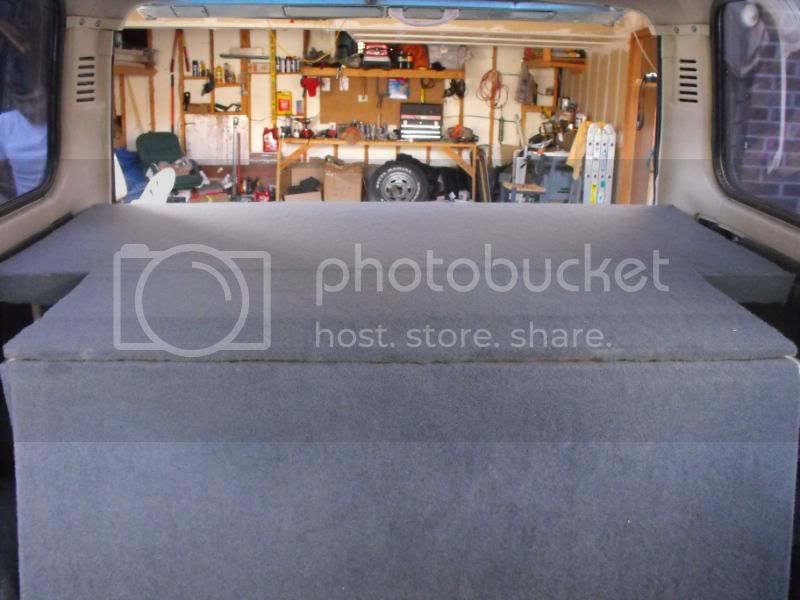 Next is the bumper which we did today here is a picture of how it came when we got it. 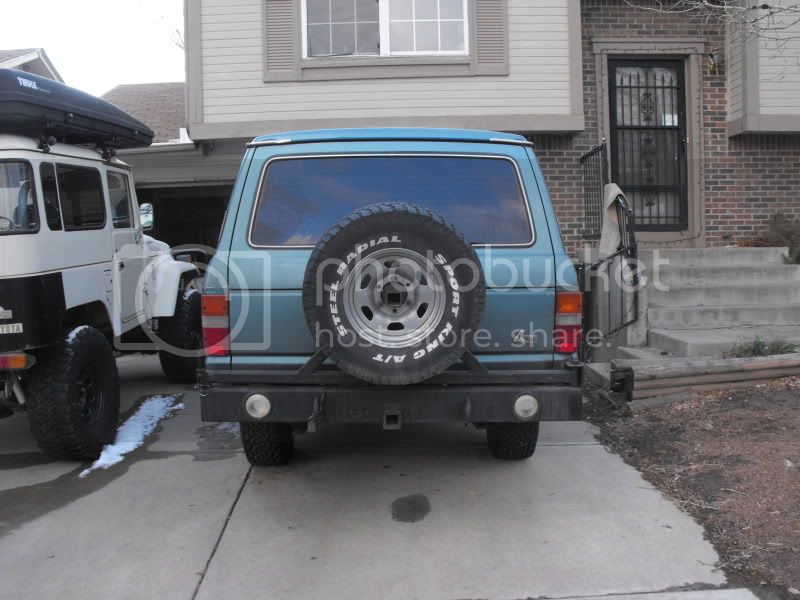 First thing we did was cut the corners 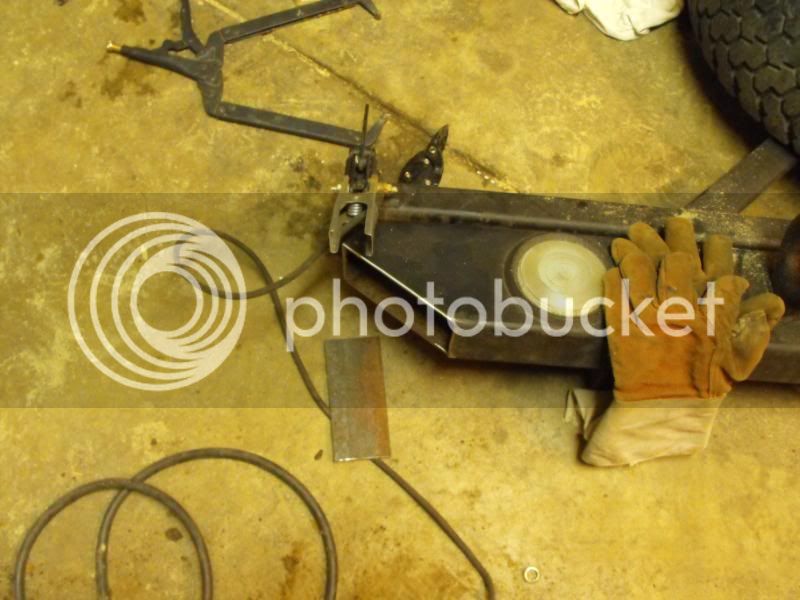 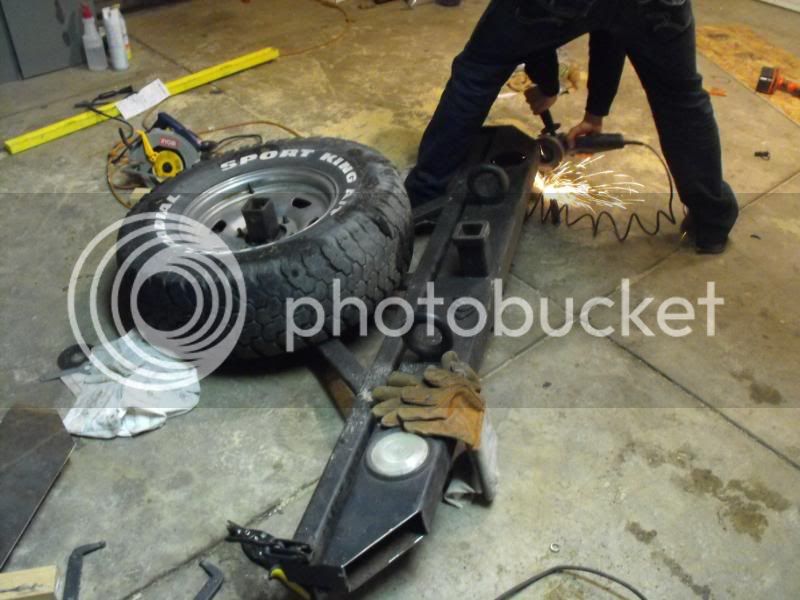 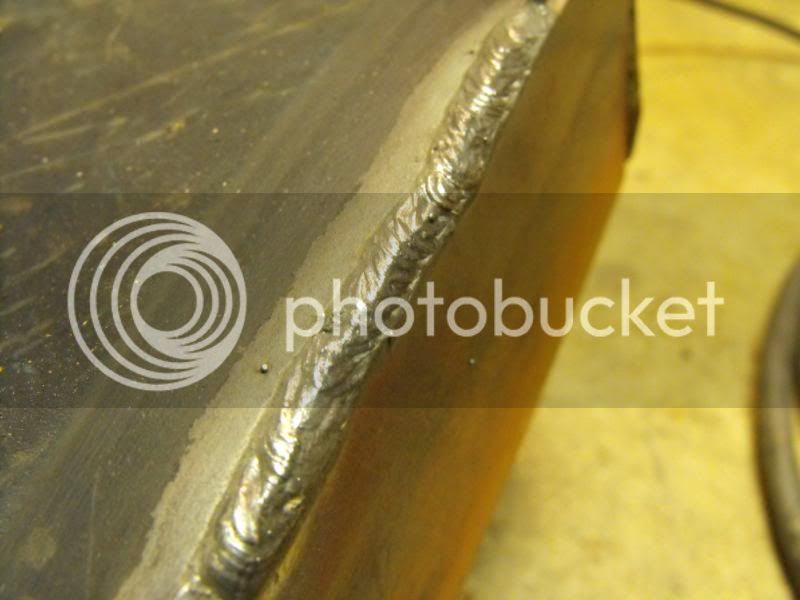 After we ground those down we cut the tire carrier off 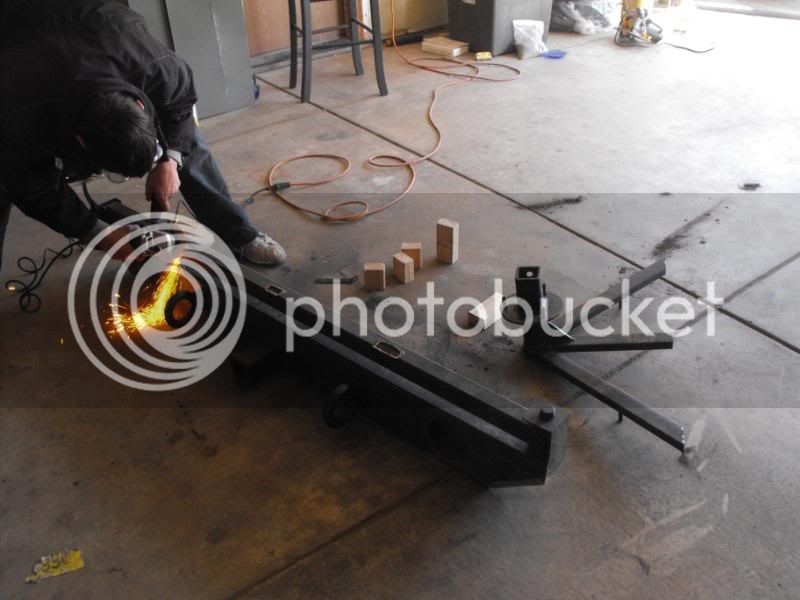 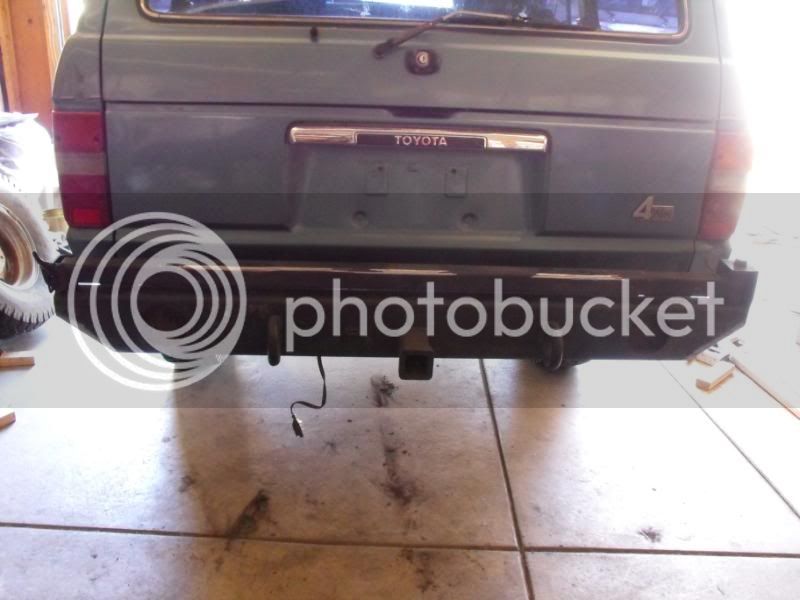 And then we welded it back on all the way to the right so that we can put a basket on the left side. 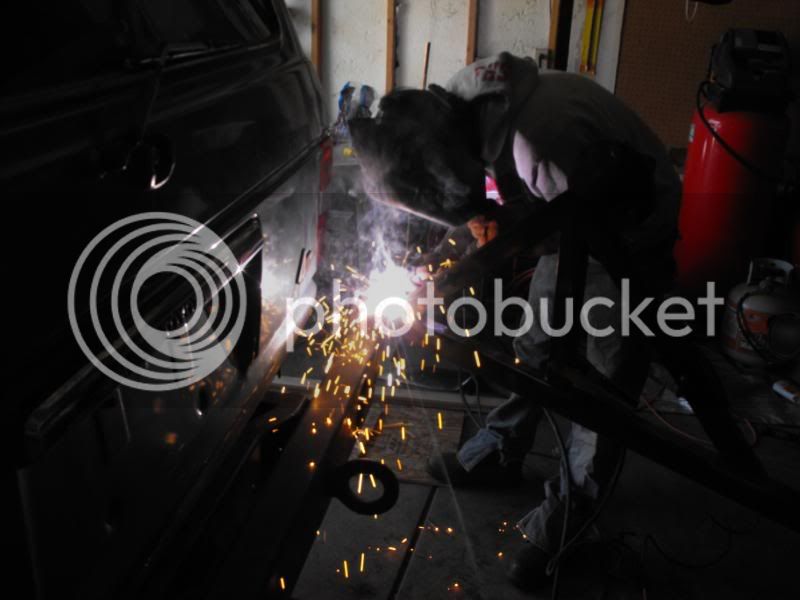 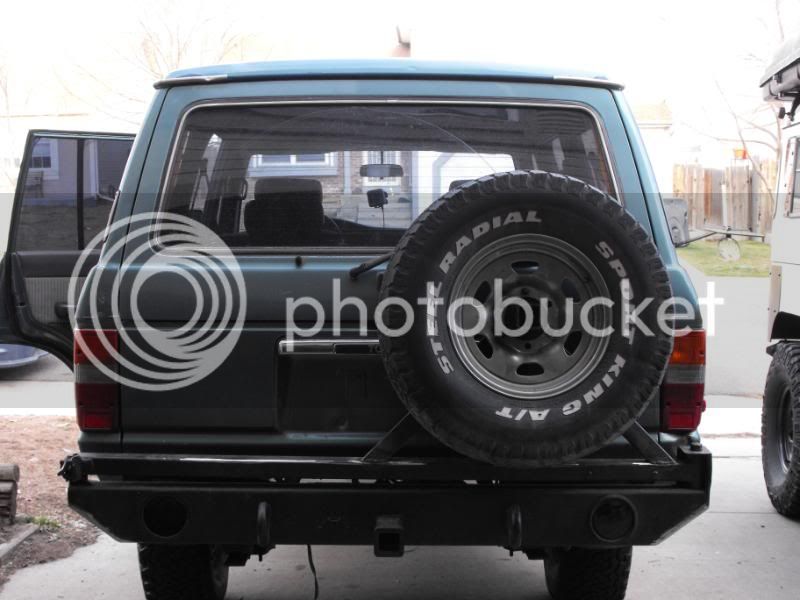 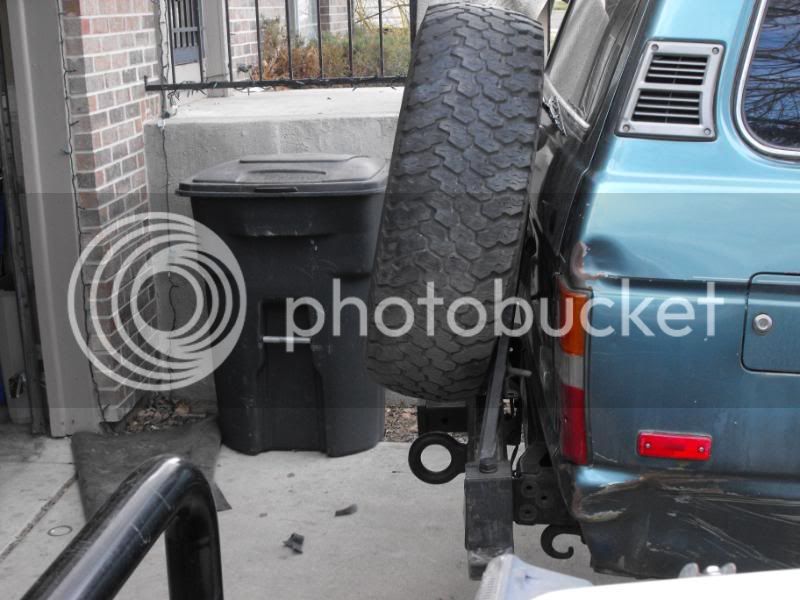 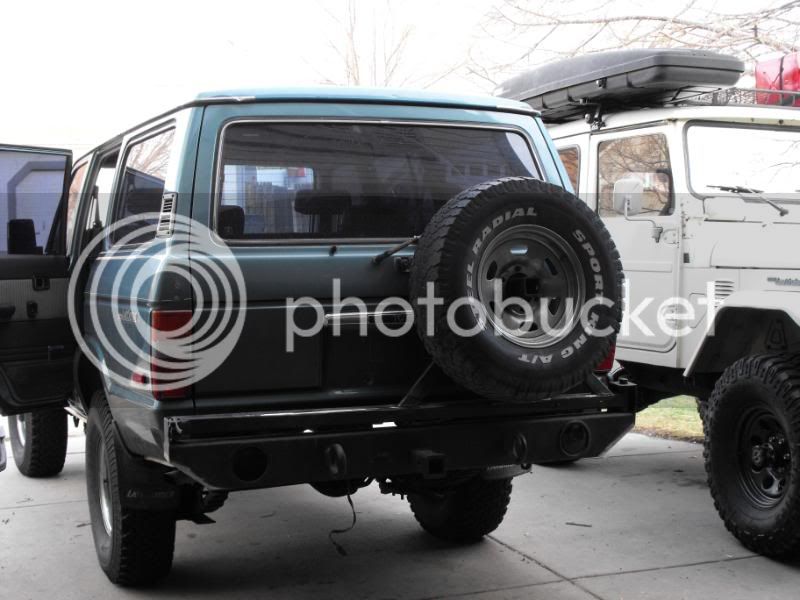 Its still not done but its getting there.

First off, nice work on the box. Plenty big for storage. Second, Your rebuild of the bumper looks much better. Good job!

I love seeing people's ideas for storage systems, more to mull over in planning mine.

Good job fixing up that ugly duckling of a bumper

Great 62 - props on the box and bumper. I picked up a 62 last month and am working on a design for a storage box specific for adventure racing – good photos.

Boulder Cruiser what size is the main tube? 2x6? I like the lights in the bumper. If you have more specs on it would be great.

This is what I want to make. Nice work

Nice bumper fix. sounds like a fun week off for sure!
1987 fj60 mostly stock

Thanks guys!
Here are some more pics of the box. 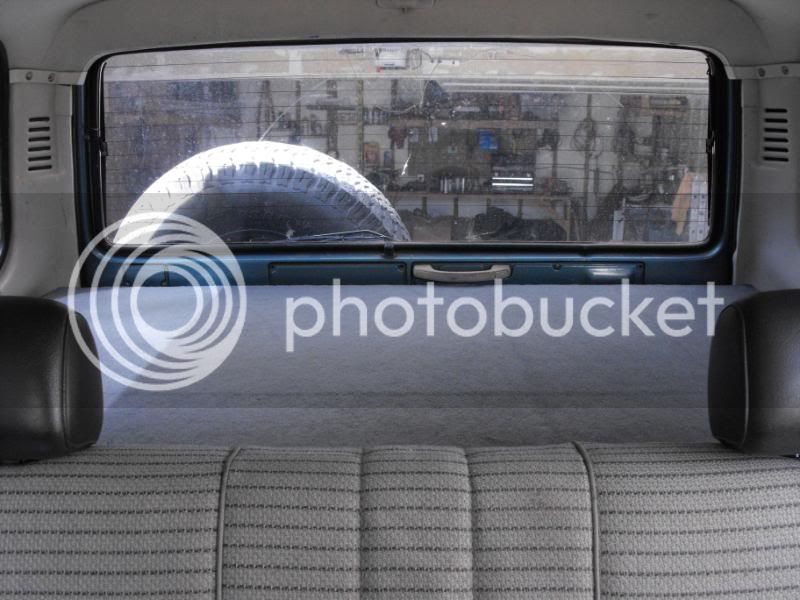 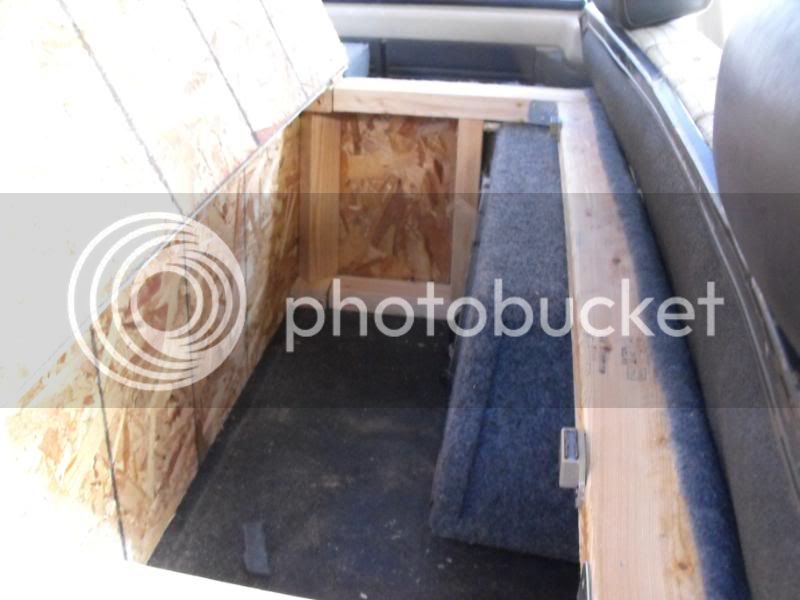 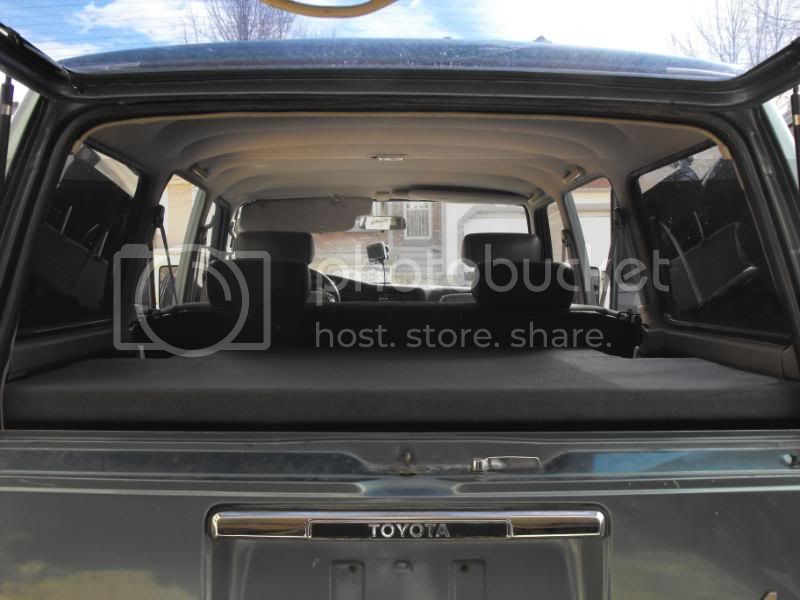 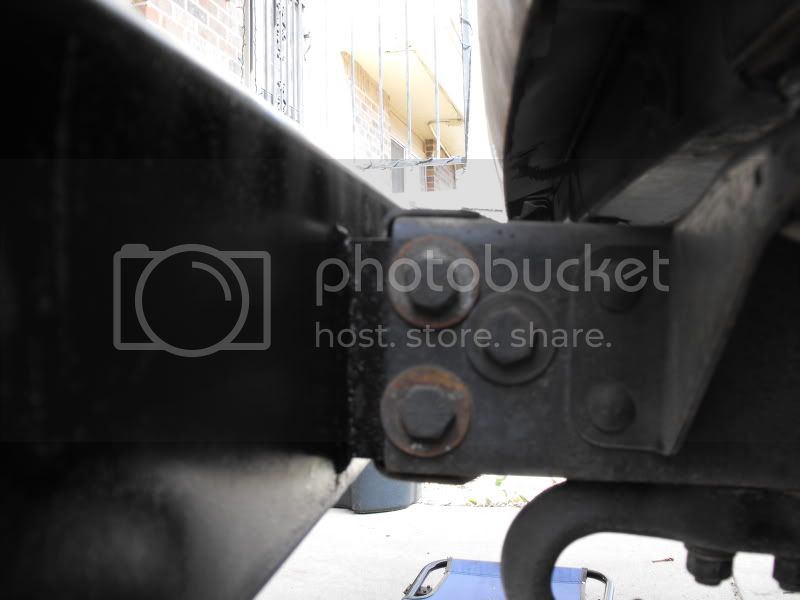 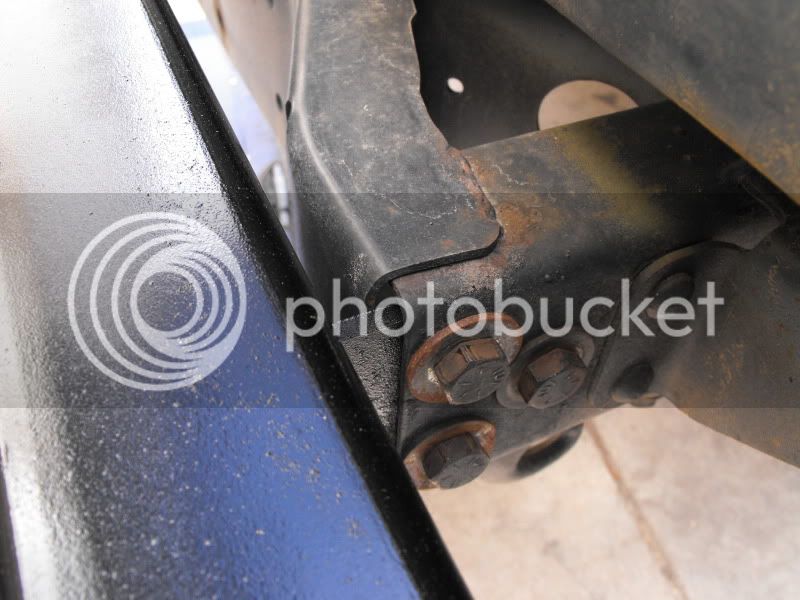 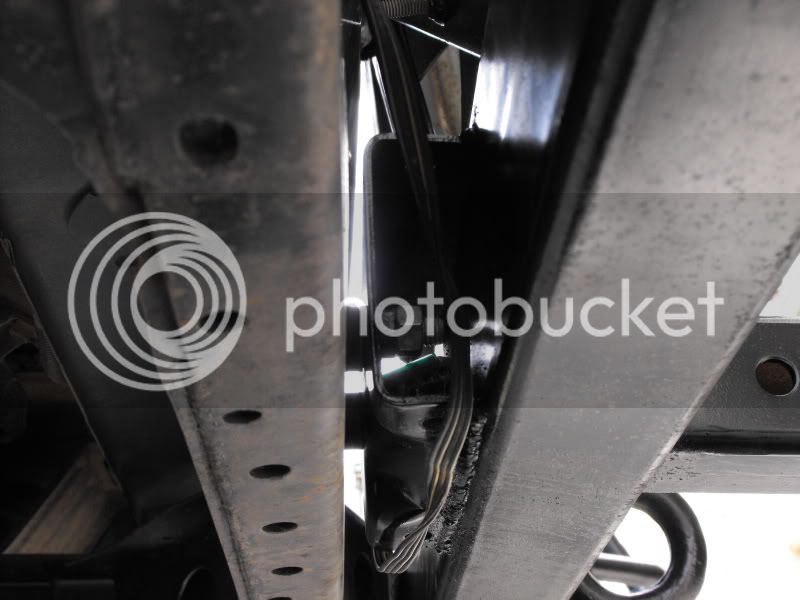 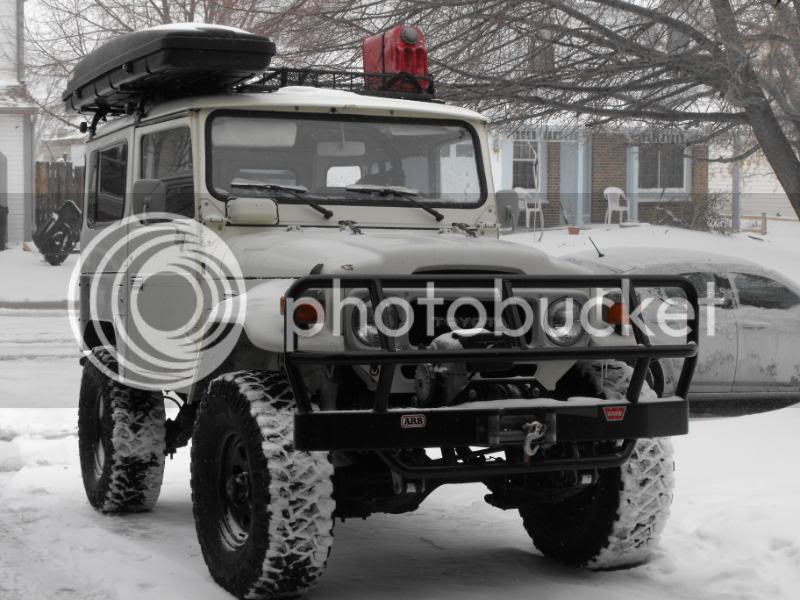 Good work ,I like the off set on the tire. Mike
Mike Hanson

ElliotB Yea we should meet up and at least go hit some trails.

Yesterday we decided to go up and see if we could find some snow, this was my brothers first time so we went to an easier trail. It was a blast and the 62 did great. On the way back we spotted a F350 stuck in a mud pit and we ended up winching him out. 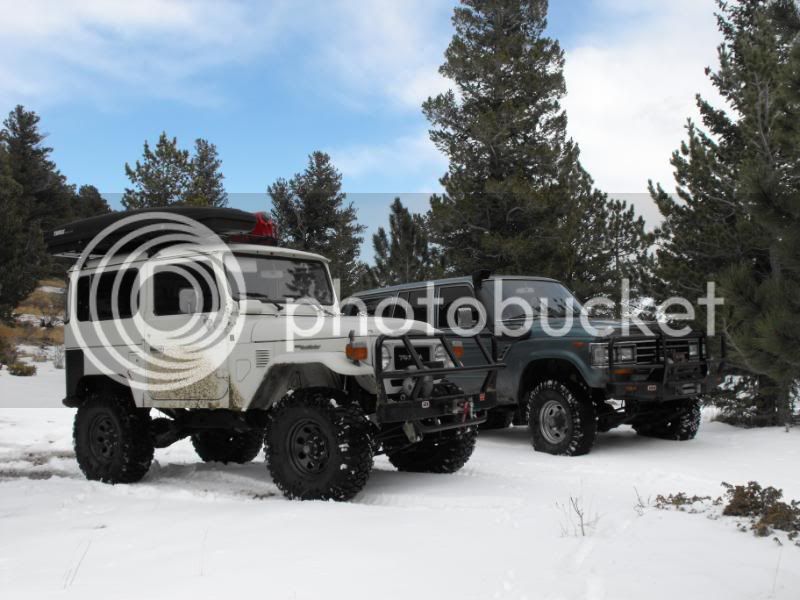 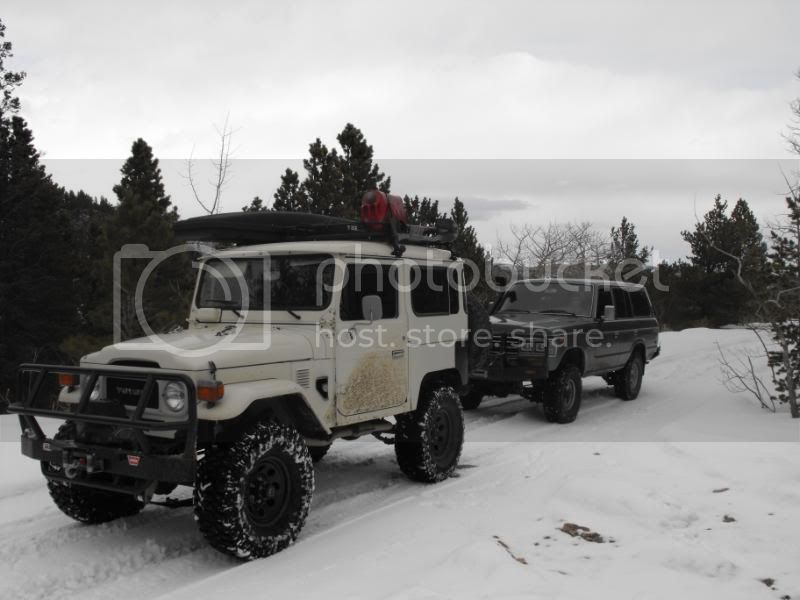 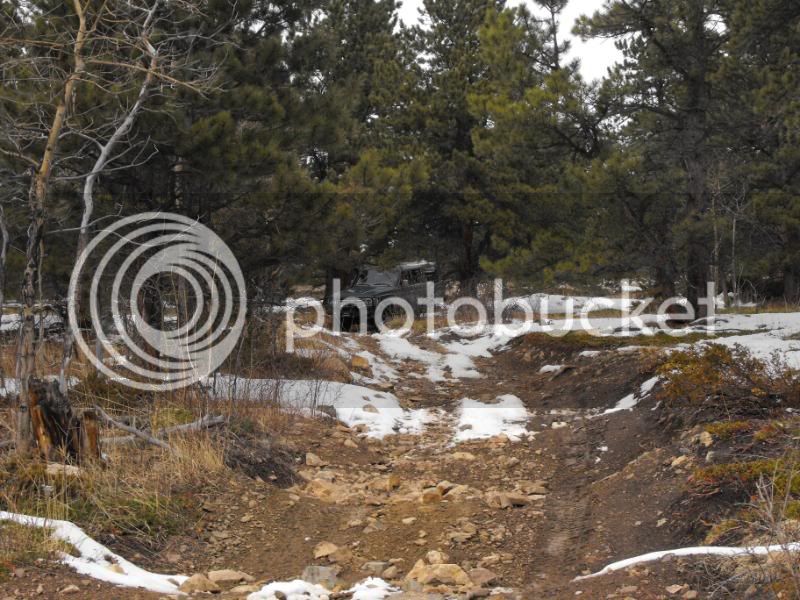 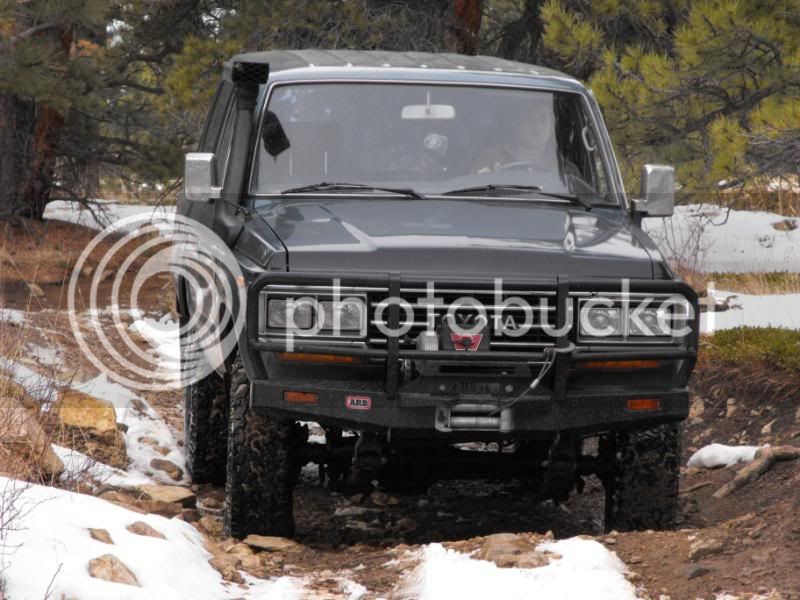 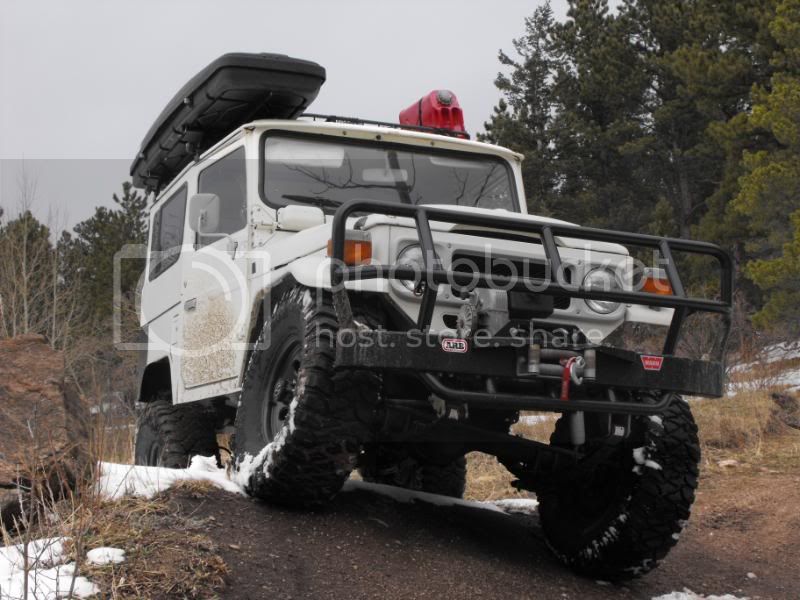 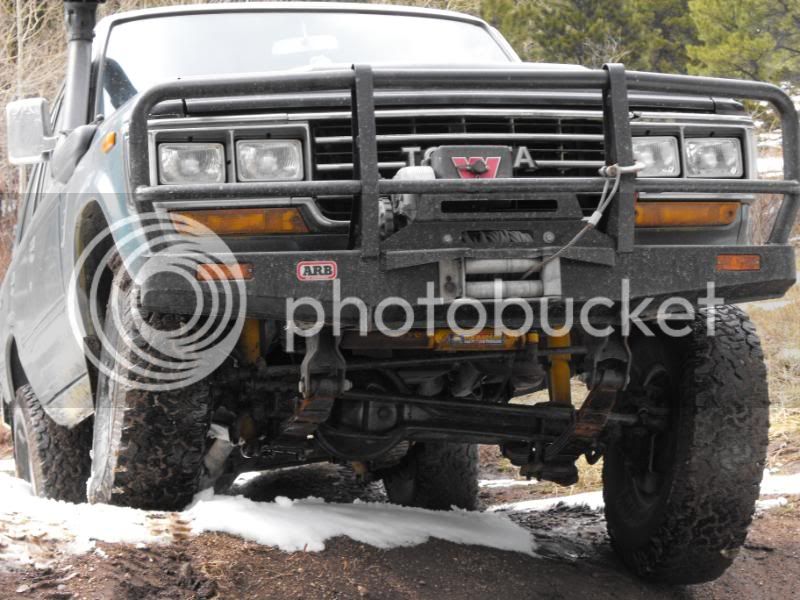 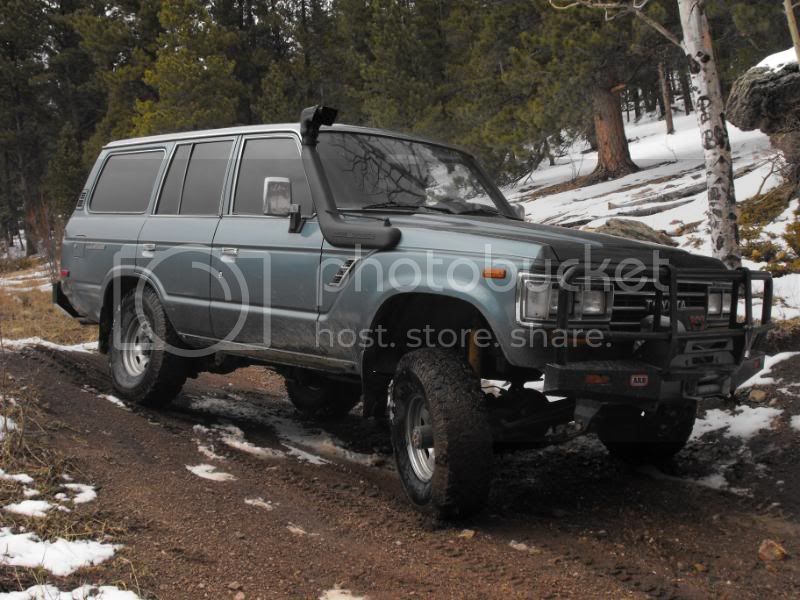 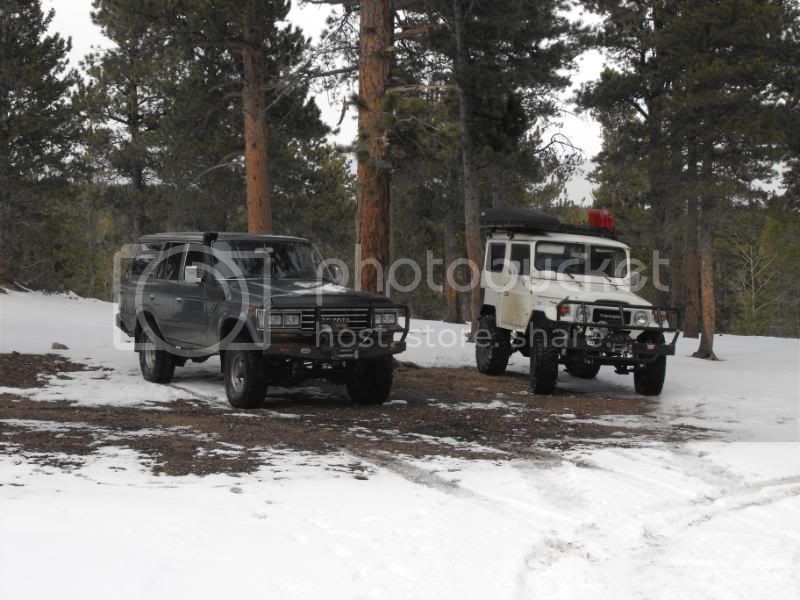 any recovery pics? my boss is a ford guy and ide love to be able to rub it in his face
84 60 33 pizza cutters 5SPD. Rooth
Ah god bless the good Mr Browning and his ma duce By far the most enjoyable infantry weapon to unleash it's fury upon the battle field Happiness truly is the warmth given of from a smoking M2 like a ray of sunshine on your face durring a spring day. import silvia
M

I built that 40 in one crazy week, let me know if anyone wants more pics. My wife is still pissed you tinted the windows on her old 40. LOL! Good luck with the 62 build. 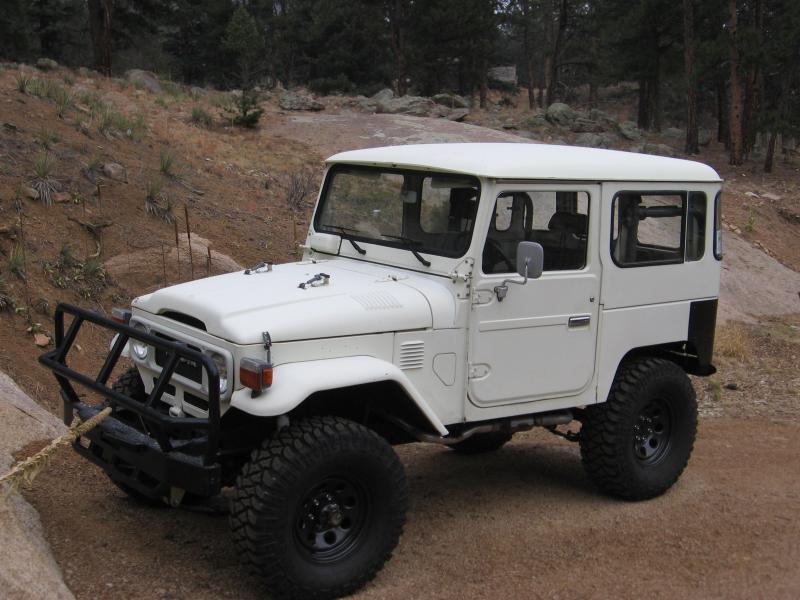 askeyey We bought the carpet at checkers its almost like carpet that would be on a sub box, sprayed it and the wood with 3M spray glue. Its on there pretty good.

How did the 8274 do pulling the fullsized truck out of a mud hole? Wish I would have been there for that, sounds like a blast. I bet you could go find some snow up there now.

Boulder Cruiser said:
We chose this 1990 62 that has been for sale for awhile, it has some issues but we picked it up for pretty cheap.
Click to expand...

I've seen that 62 on Denver's CL on & off over the last year or so. Don't know if it ever changed hands or if the same guy kept relisting it...

I thought it had some great add-ons already with the OME, ARB, snorkle, (aux tank & locker?) etc. I see the crunched rear quarter panel (who cares?) but I'm just curious as to what other issues it has? Just wondering if I should be kicking myself for not getting it... Curious too what it finally sold for if you don't mind me asking.
.
'89 FJ62 ~ it's nice

Motoloco
The first thing we tried was to winch him but he was good and stuck and im alot lighter than him so i was being dragged through the mud instead. So i grabbed a strap and we hooked it to the front bumper and pulled him out with a little force.

sls019
I like them, they've been really good in the snow. I havent driven it in the rain but when the roads are wet they do fine but im not speeding around either.
They're 315/75/16 and i think the wheel is 10" wide

Meatdawg
Thanks! Im sure ill have alot more.

kcowyo
Yea the cruiser was for sale by the original owner last year. Then Matt (the person i bought it from) bought it Not knowing the #1 cylinder had really low compression. He had the head rebuilt, put a new dizzy in and a few other things. It runs great now. We bought it for $3800 which may be a bit high but my brother was in a hurry to get a truck (Hes leaving for collage). As far as current issues the front hubs need to be repacked and it needs new brake pads. Other than that its great truck, the quarter panels will be cut so most of the dent will be gone. It came with a bunch of extra parts and $20K in Receipts. All in all im happy with it, its a good start.

The rims on the 40 are 16x8 with a 4" BS. The tires suck in packed snow but rock in deep stuff, typical MT. Did a little wheeling in our new 62 today but forgot the camera. Will bring it next time!
You must log in or register to reply here.