***As of this update. All spoken for parts are paid for and shipped.

How I do things to avoid confusion:
To "call dibs" or get in line, POST IN THIS THREAD FIRST with the # of the item(s) you want, then send me a PM. I will base first come first served interest on the order you post up in this thread. I think we can all agree it is annoying to go into a part-out post or multiple-parts-for-sale post and everything you ask for was sold. Sorry sold. That was sold. No longer available. So-and-so is ahead of you, he called my cell, Etc…
I’ll mark things “Pending Payment” if they are spoken for, and “sold” when payment is made, and “sold/shipped” when…. You guessed it—when it ships.

Shipping: I’m down to ship any of this stuff. You pay actual shipping costs (+ actual cost of any special supplies I might need to ship an item). Shipping from 84403 or 84102 area code. I can ship whatever method you ask, but I usually default to USPS flat rate boxes because they are easiest. I can get dimensions and weights, but I won't price shop for you. I tend to ship on Fridays, sometimes faster, I'll message you if it's longer.

Payment: Once we've settled on a price and cost to ship. I’ll PM you my PayPal info. You can send it “friends and family” if you trust me. If not, check “goods and services” and I’ll take responsibility for the PayPal fees so you’re protected should I turn out to be a loser. I also have Venmo and Square Cash apps. They are less protected, but faster/easier. (I figure if one of us doesn’t keep up the bargain we will end up in the “Beware of mudder ______” section. Should be enough motivation to stay honest. Also we have to live with ourselves.)

Pricing: I’ve bought (and searched for) a ton of parts in the last 5 years, but I’m no expert. Feel free to let me know in the comments or via PM if I’m too high on a price. I’m not trying to get rich, just cleaning out the garage. And if I’m way too low on something, keep your damn mouth shut. Don’t ruin a good deal for another mudder. LOL. Don't like a price— shoot me an offer. Don't forget to "dibs" it in the thread first.

Better pics: If you want more/better/specific pics of anything let me know.

Vintage of parts: I’m doing my best with what God has given me. Be aware I was wrong at least one time in the past. It could happen again at any moment.
Last edited: Jun 8, 2019

1. $35— Cruiser Corps Window Regulator Passenger side. ’74 and earlier. New in Packaging ($42.92 on Cruiser Corps website). I think I accidentally double ordered this when item 2 (below) showed up and didn’t match the driver’s side. I’m honestly a little confused why I have it. Guess I’m getting old. 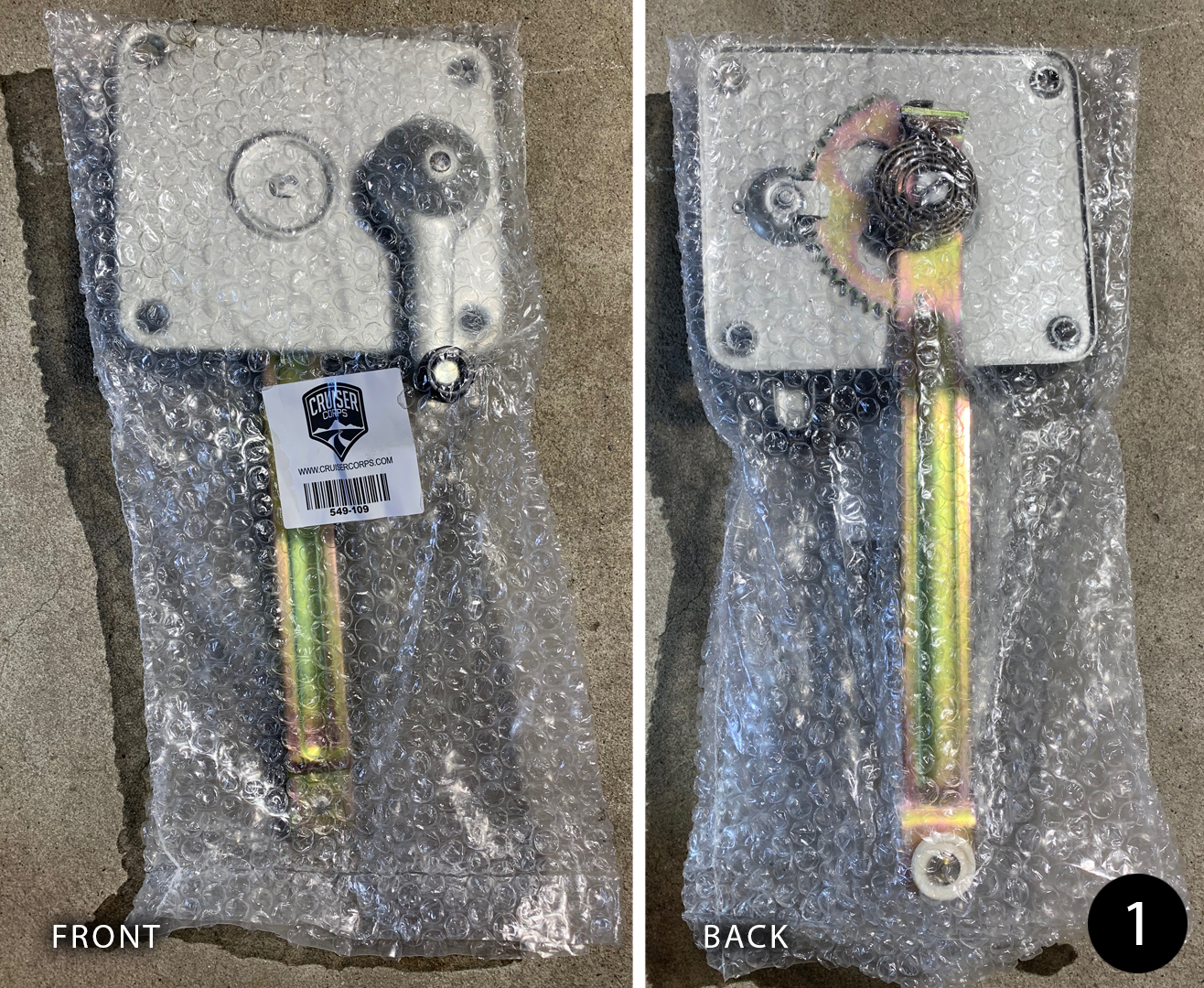 2. $30— Cruiser Corps Window Regulator Passenger side. ’74 and earlier. New, only removed from packaging ($42.92 on Cruiser Corps website). Note: the powder coat on this has a slightly more gold tint to it than item #1. I bought this one originally with the driver’s side as a set. I was SO sad when the color didn’t match. I’m feeling better now though, thanks for asking. 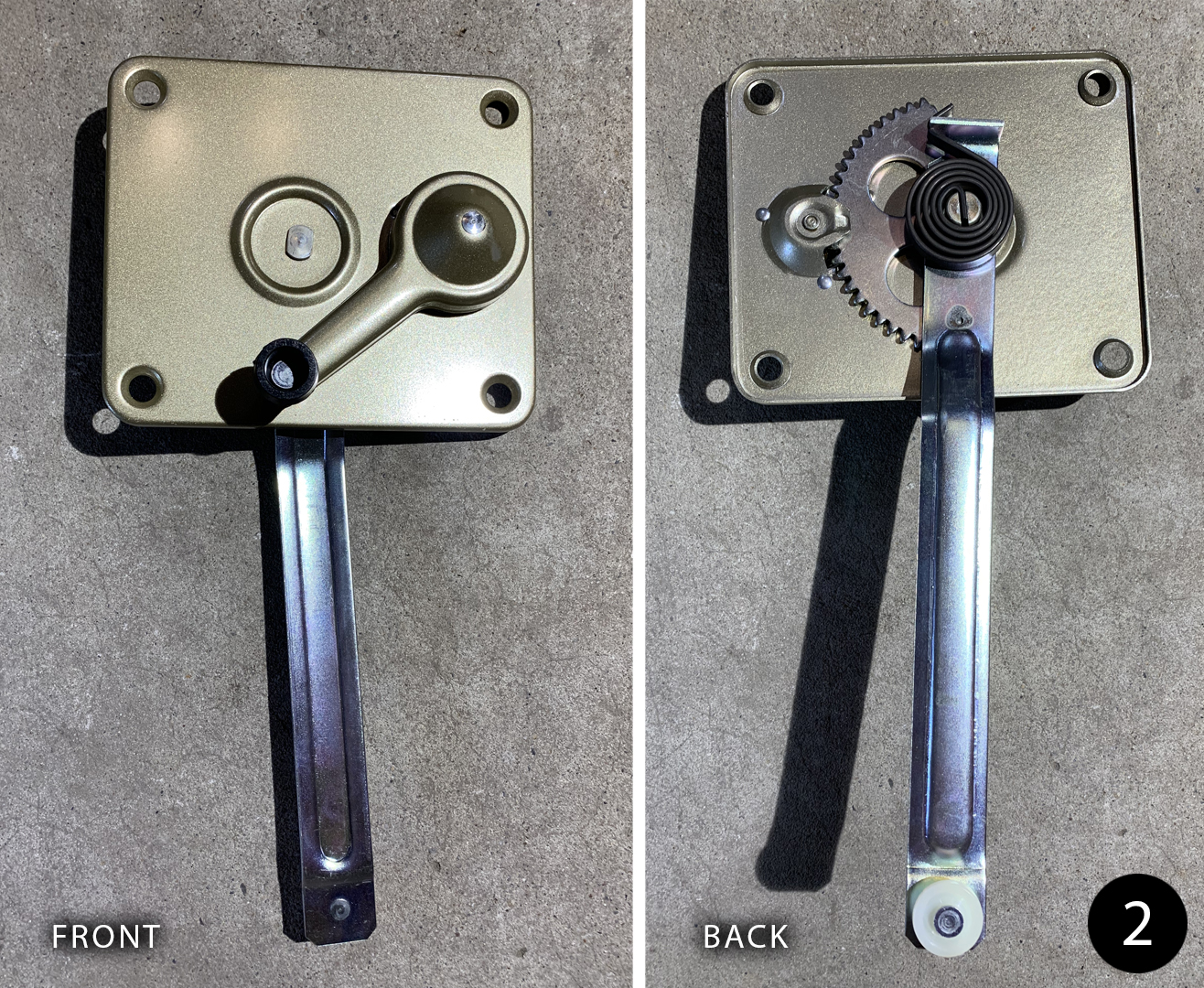 3. $50— OEM Roll Bar pads. No rips or cracks. I would say excellent original condition. I bought all new pads from FJ40Dash.com. They sell all 4 in a set, and the FJ40Dash units have a slightly different texture. I care more that they match than that they remain OEM (Honestly, would more than like 5 of you be able to tell the difference?) so these are for sale. Cheapest I found them was ~$60-$70 . 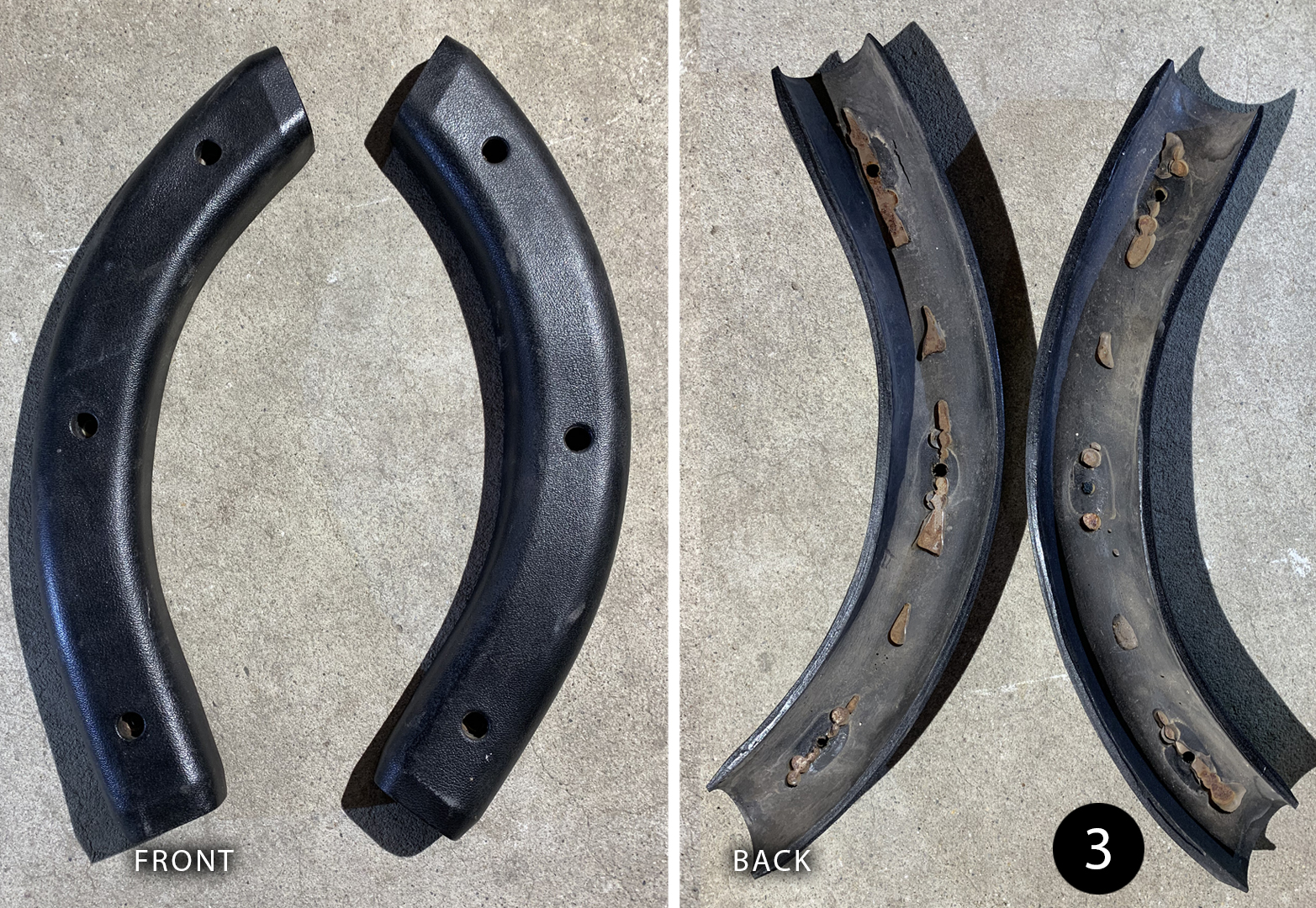 4. $150 for both— ’75 and later windshield hinges. OEM. These are basically perfect. Epoxy primed and painted in single stage, Limco Premium -nebula green. They open freely and easily like they are new. These are not correct for a ’74 or earlier (ask me how I knowJ). Again, I don’t like to over-sell things. I’m not exaggerating when I say how good and smooth opening these are. I’m not going to do my normal “lower price than I can find” on these. I believe them to be in superior condition to anything else I’ve personally seen. The earlier set I ended up using is a far cry from these. (Ebay is consistently getting ~$75 per hinge in whatever condition. Specter wants $95 each for used) 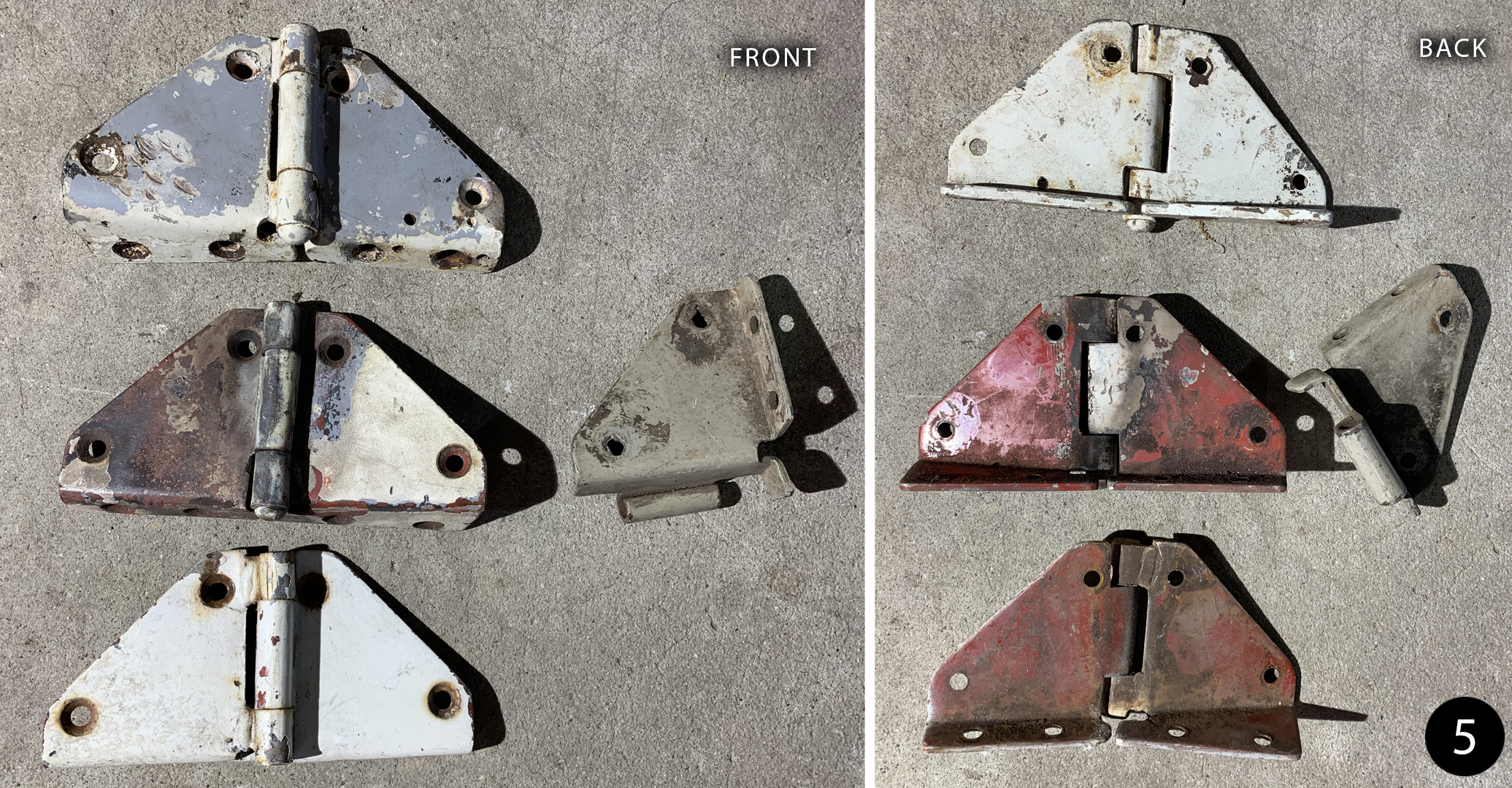 6. SOLD/Shipped $20— OEM Windshield to cowl weather stripping. I think I undersold this on my previous for sale thread. There is some cracking of the rubber, but only on the ends and would not affect function. It is still soft and pliable and I actually regret that I bought a new one. It has some overspray paint on it. (City Racer Repro is $120 --- OEM is ~$270) 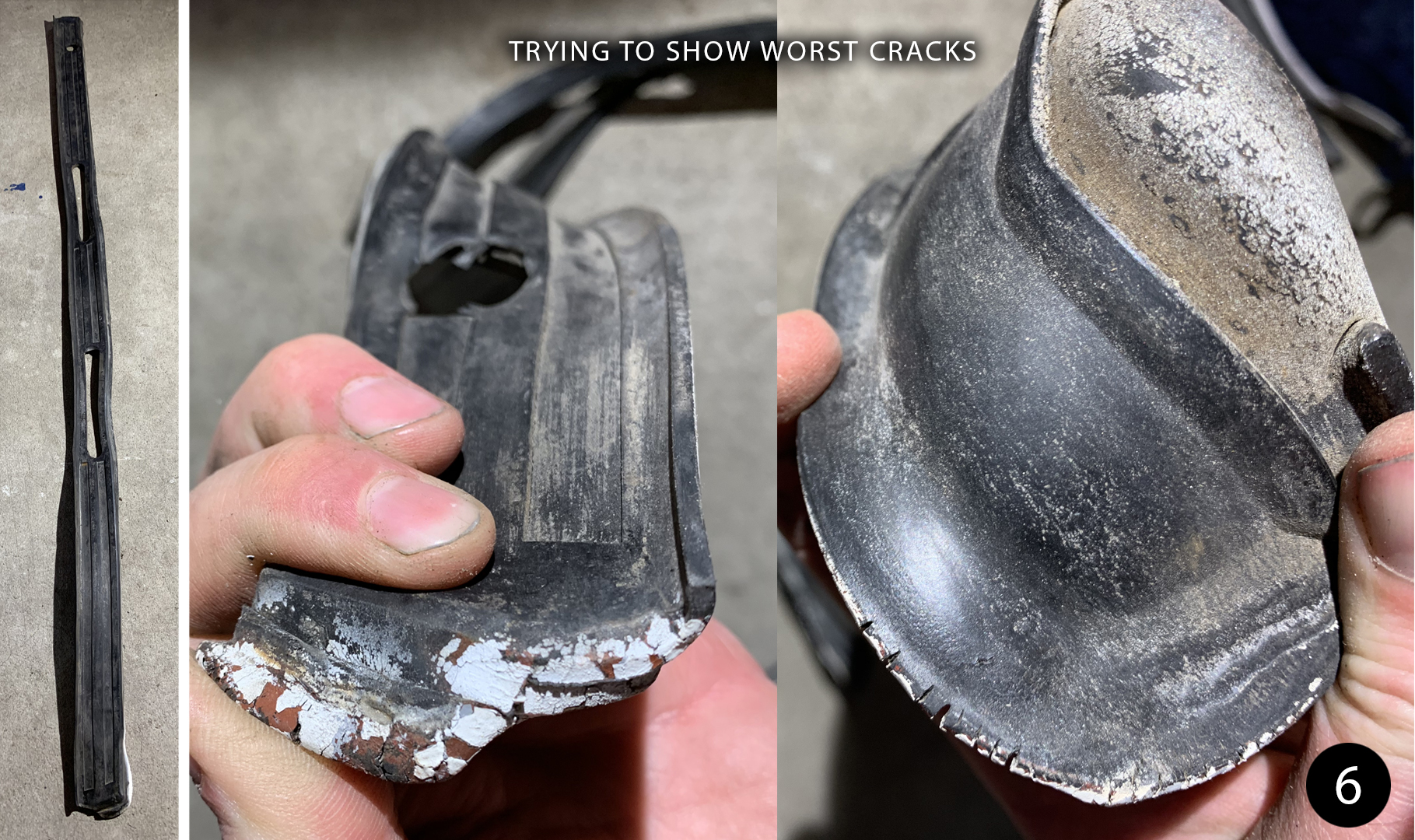 7. SOLD/Shipped $50 (all 4)— Door hinges OEM (x4). I believe these fit all years. I started stripping one. One has surface rust on the bottom. I was going to use these on my ½ doors but talked myself into quik hinges instead. 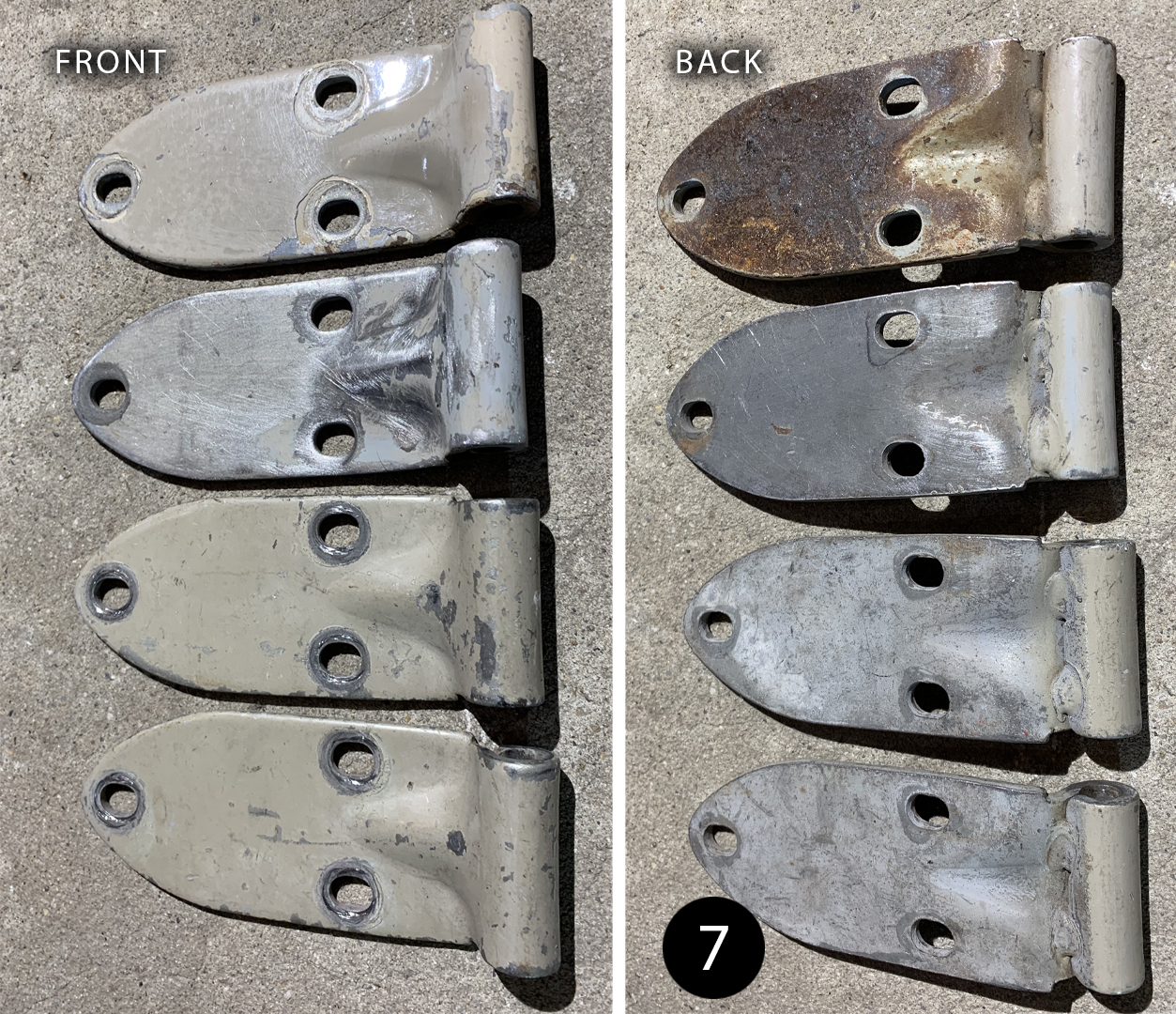 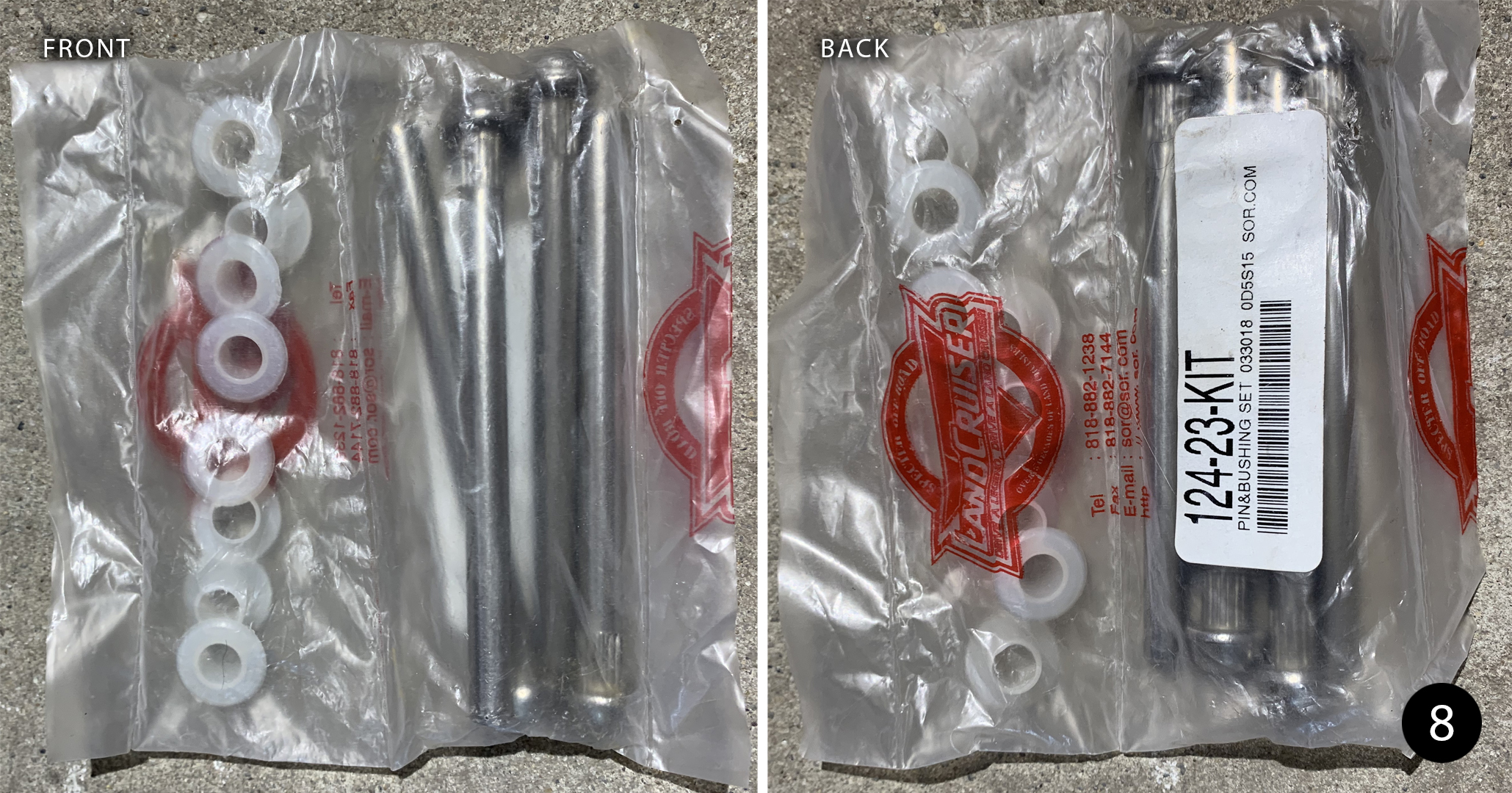 9. SOLD/Shipped $15 for both— Side mirrors. Aftermarket. Convex.wide-angle. New, never installed. They are a little different color plastic even though they came together (I think from CCOT if I remember right) CCOT sells them for $15 each. 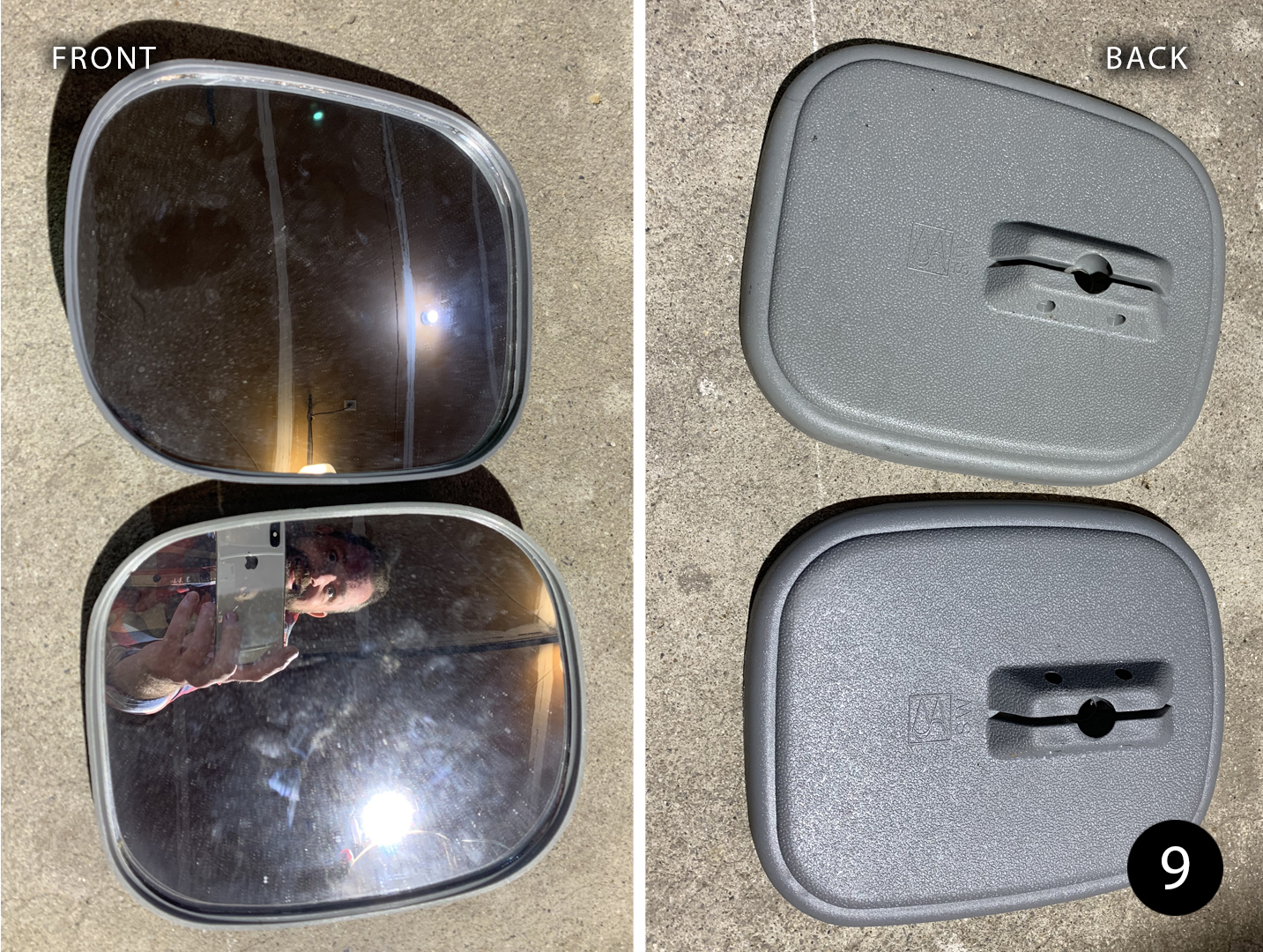 10. $10— Springs and plastic ends from inside rear hatch struts. I did the gas strut mod. My hatch now lifts all the way up on it's own, but I still hit my head on the inside handle.

11. SOLD/Shipped $20— Cruiser Corps jump seat straps ’73-‘78. New. I Installed them, but quickly removed/unused. I learned my jump seats are ’79+. They came in the truck so I had assumed they were original. I had to re-buy the longer straps. (I bought these at Cruiser Corps for $26). 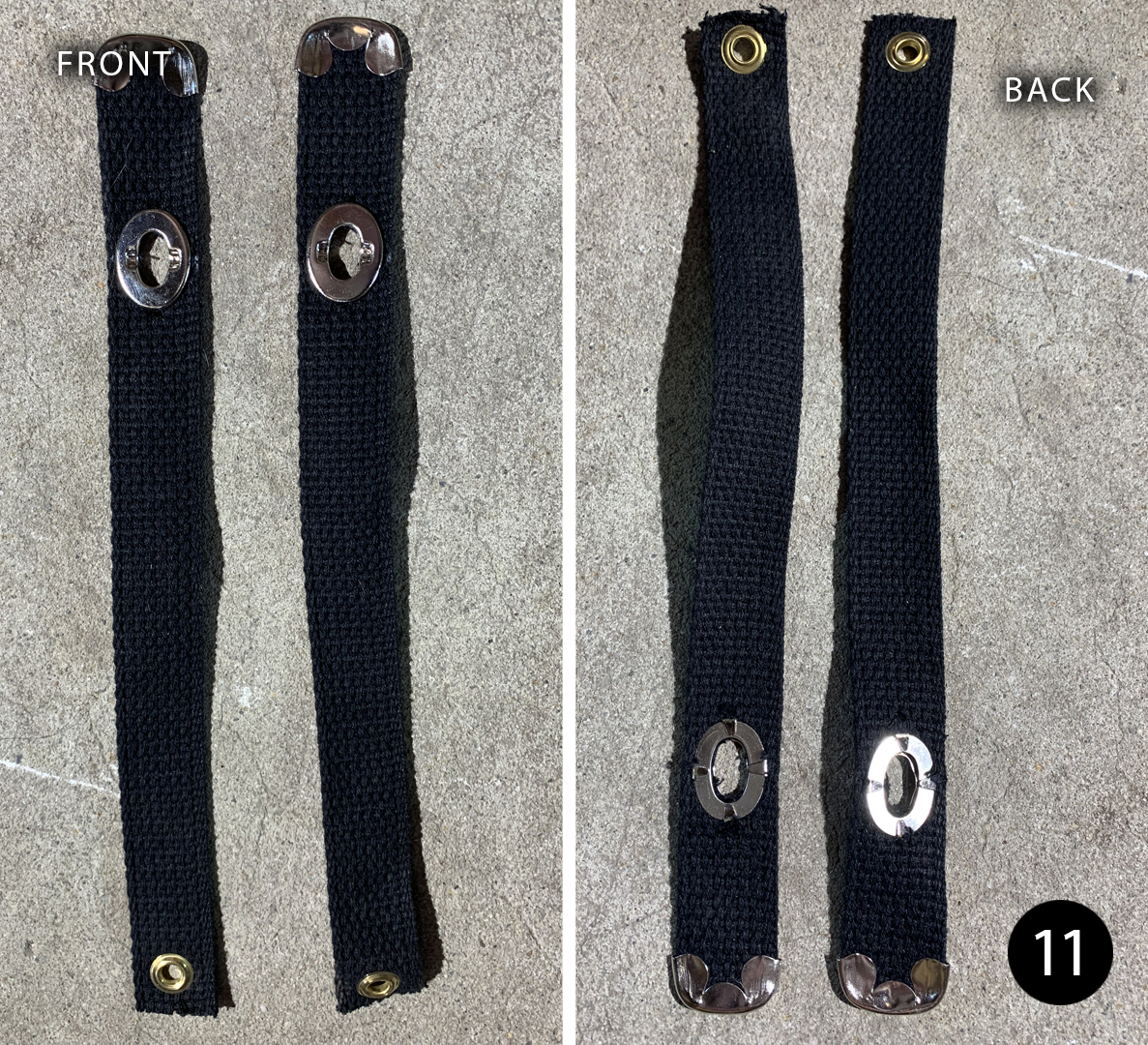 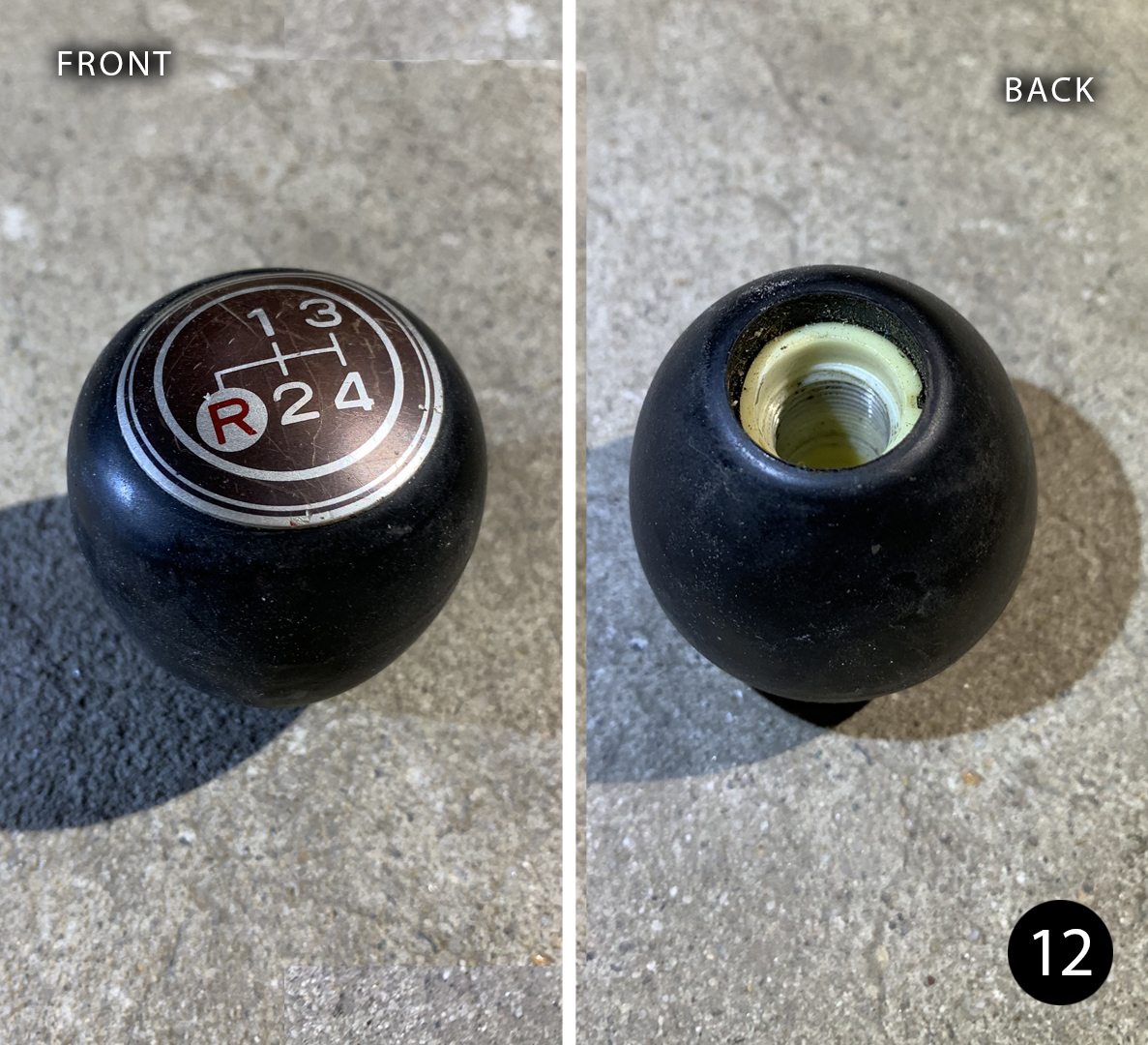 13. SOLD/Shipped $4.00 (for all 4) — Specter door bushings. New in package. Bought these when I was planning to restore my windshield hinges. I ended up finding some that didn’t need as much love as the ones I have listed in this for sale thread somewhere. ($1.30 each on Specter) 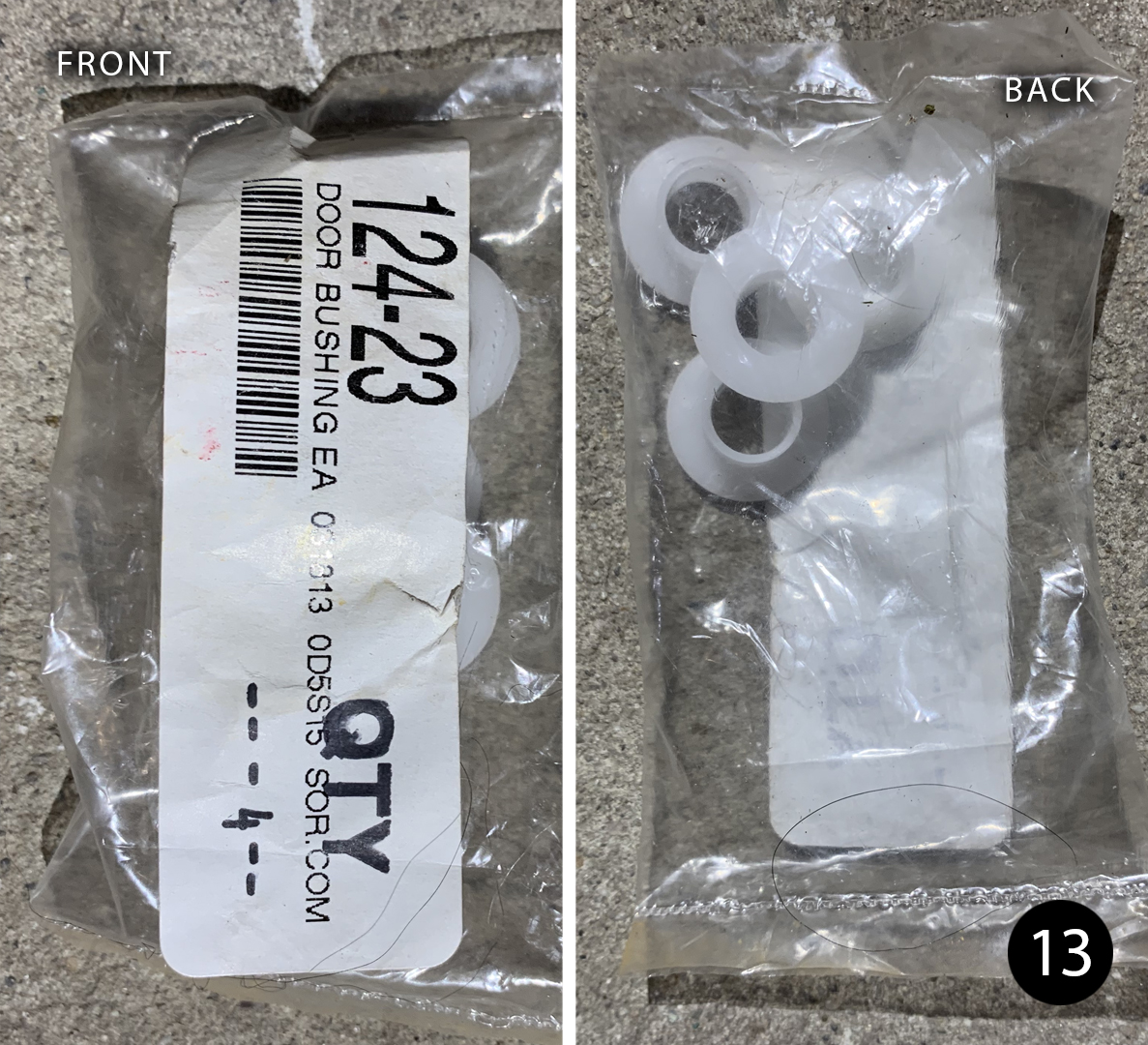 14. $50— Radio delete plate. Brand new. Put it in for a few weeks at the garage. I found an OEM a.m. radio I could stomach paying for instead. (These are $58 from the guy that makes them). I don’t have the bag he put it in, but I can put it in a Ziploc for you, to keep it fresh during shipping. 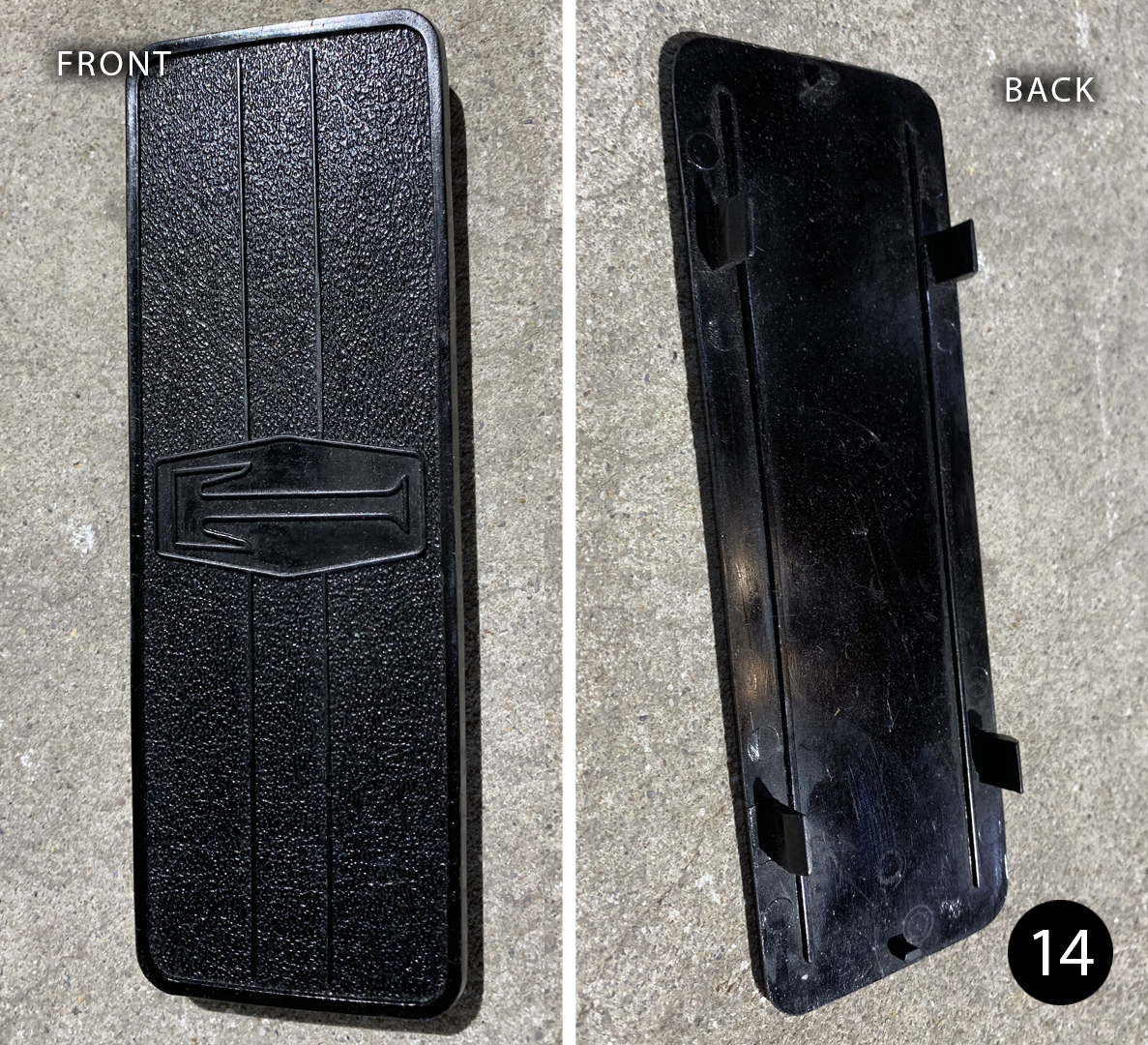 15.SOLD/Shipped $3— Door paddle lock knob and set screw. I don’t believe this to be off of a “keyless entry” unit. 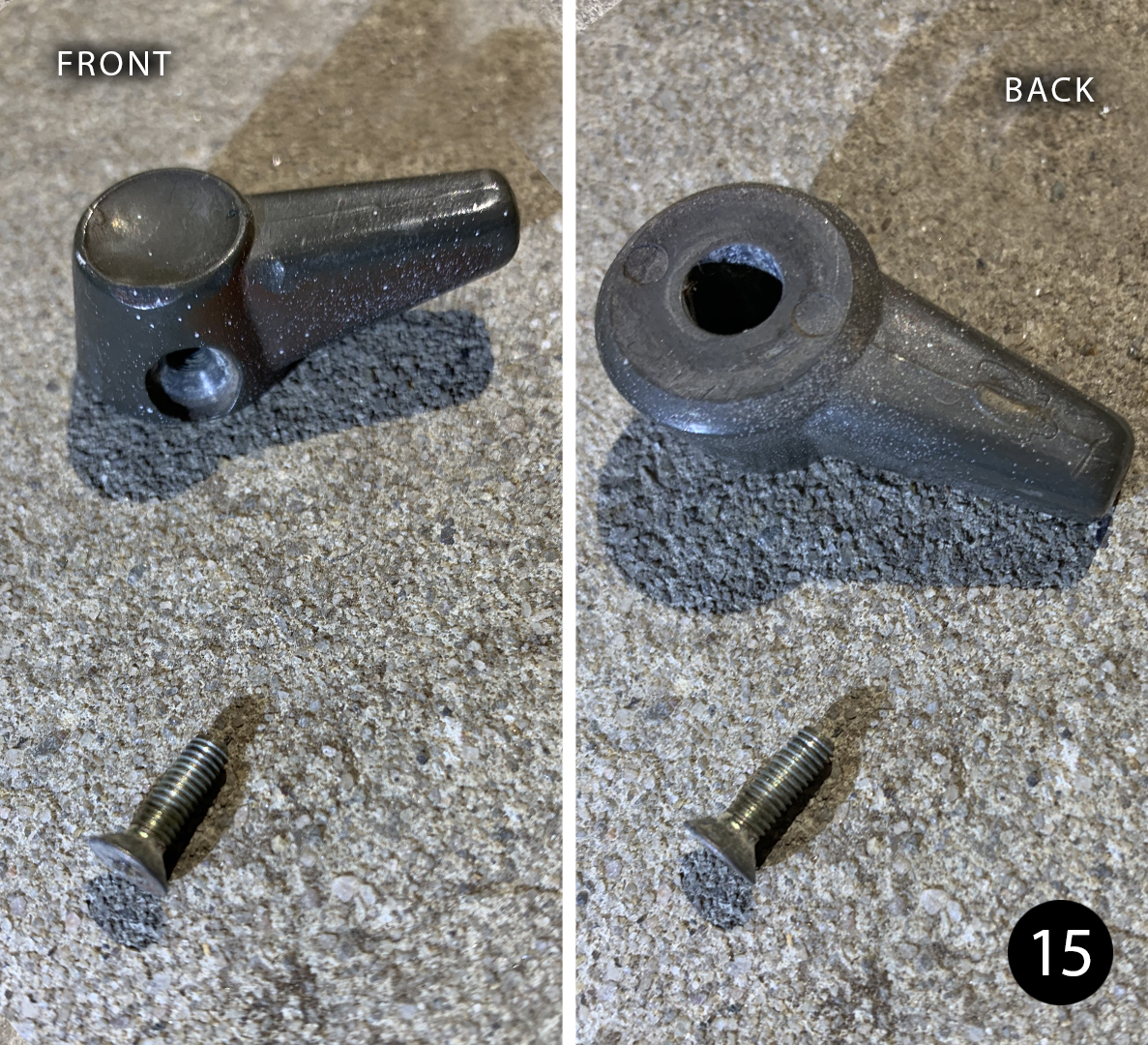 16. $5— Misc. door paddle parts. “Is there anything special about these?” you ask. I’m not saying that these were hand assembled by a semi-retired Samurai warrior that was working part time at the Toyota factory for a little extra income to supplement his pension checks. But I’m not saying it wasn’t either. I guess we'll never know. 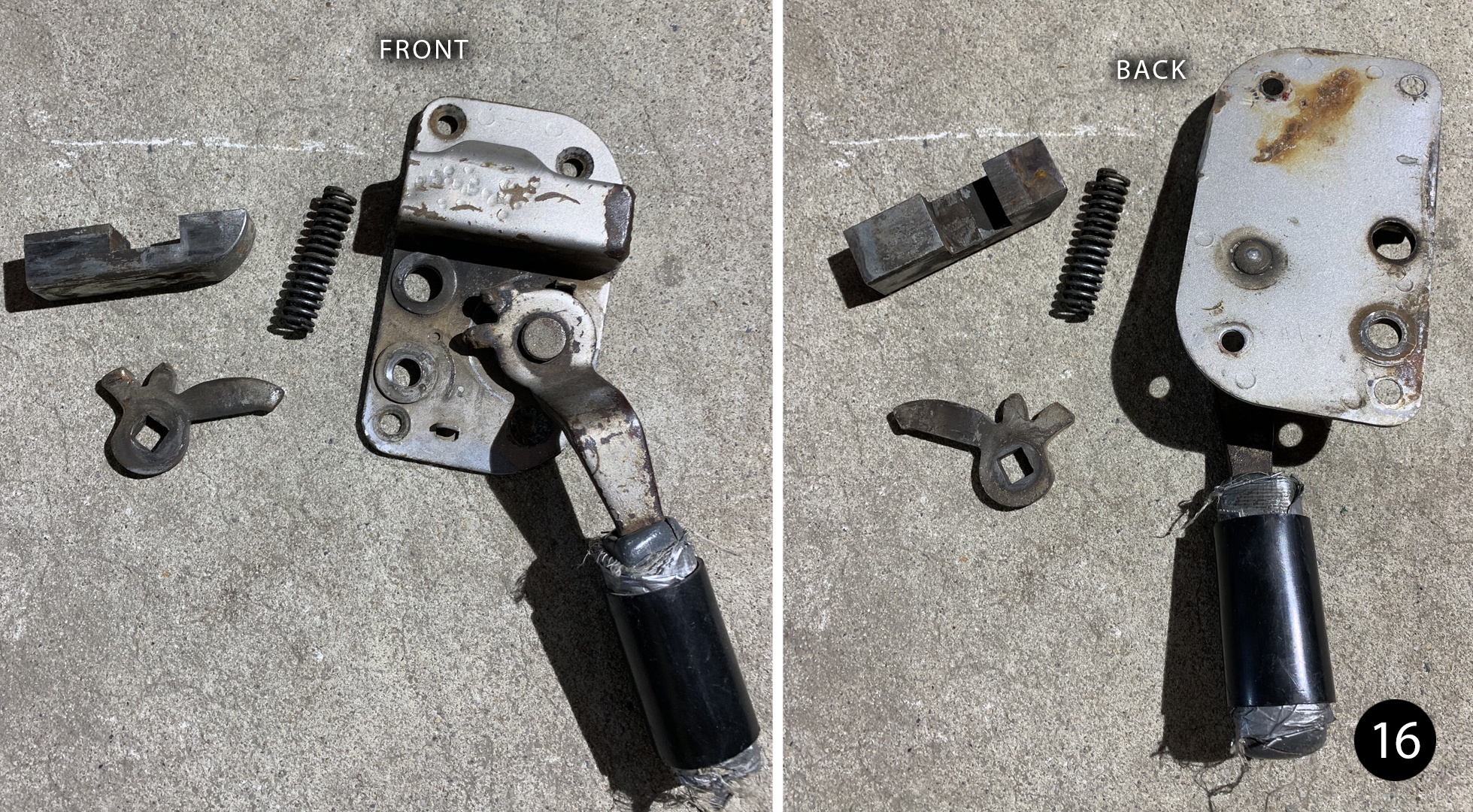 17. SOLD/Shipped $25— Bumper gussets. OEM with that aggressive “I play in the rocks” look. A little straighter than Freddie Mercury, but just barely. A few smacks on an anvil should have these tidied up. These are $33 each new from CCOT. 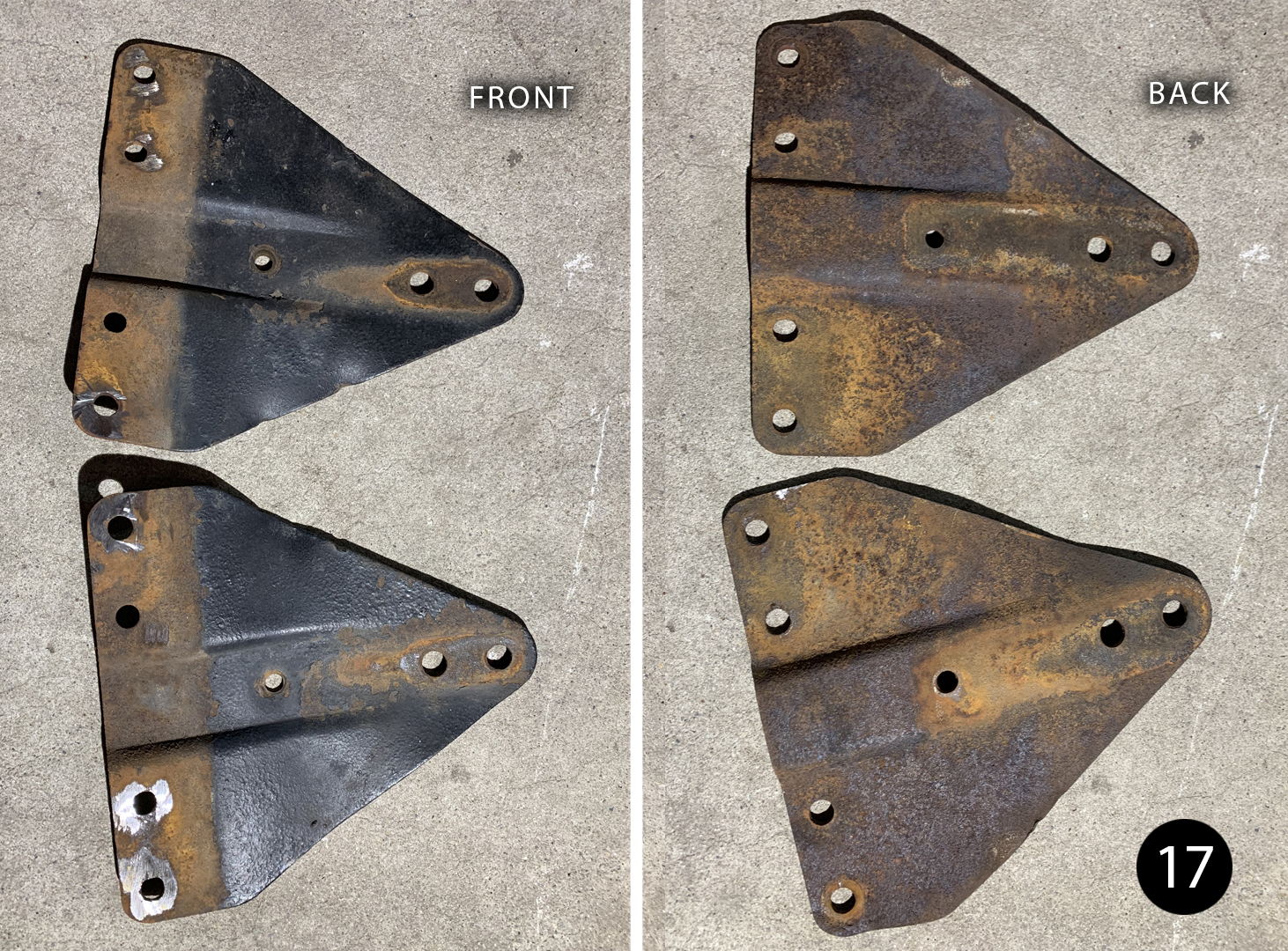 18. $50— CruiserBrothers/Valley Hybrids 1F/2F Power Steering pump mount. Installed on block but never finished installing the pump. Changed to a different bracket because of some clearance issues. I did use some of the bolts that came in the kit, but they weren’t anything you can’t find anyplace that sells metric. ($80 new from Cruiser Outfitters.) 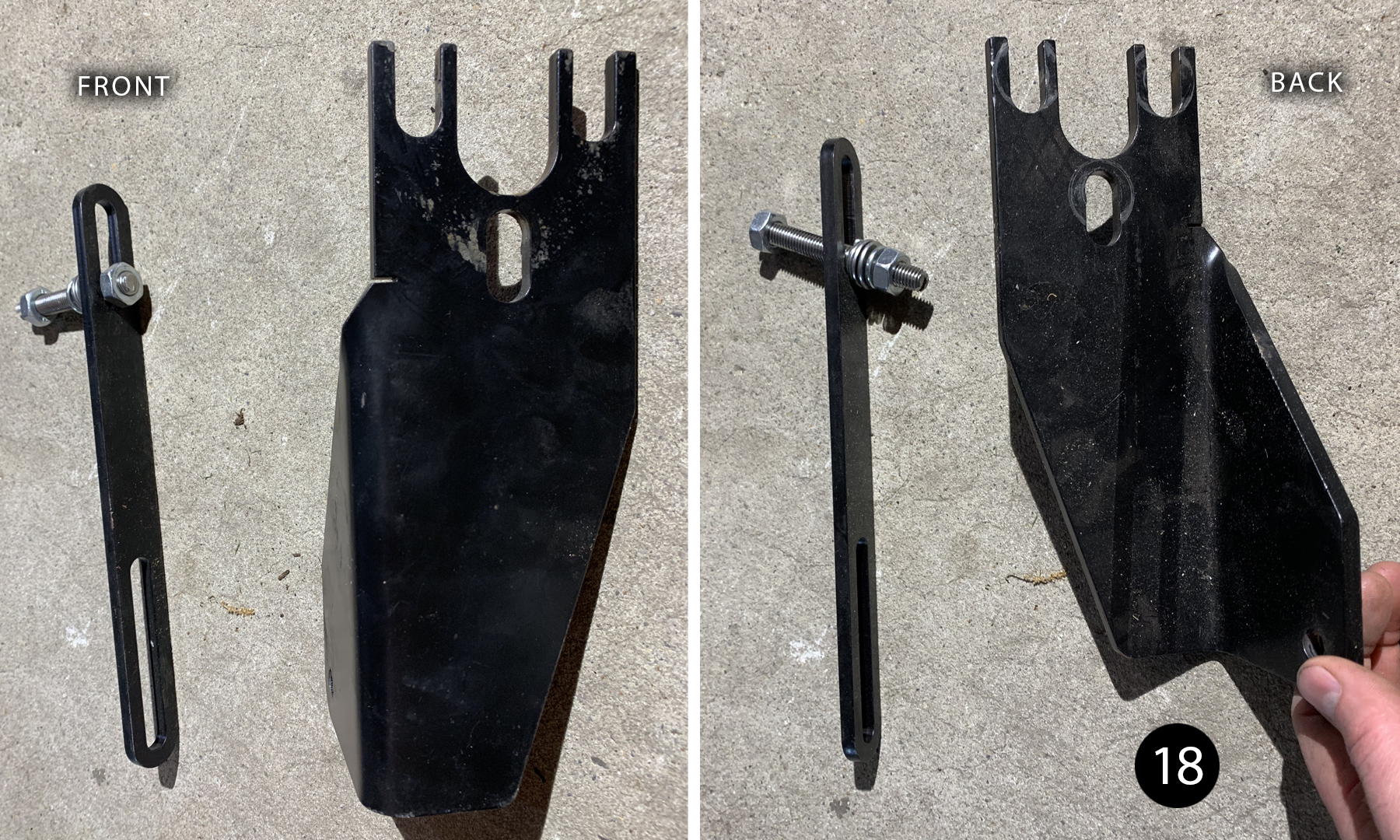 19. $50— Rear hatch and glass. I’m gonna’ be honest with you. It’s rough. Is it redeemable? Yes. Is it worth redeeming? Only YOU can decide. This hatch was installed on my truck when I bought it and functioned as expected (including the pot metal handle that everyone breaks, but then again… I expected it to be broken) Glass is good and comes with free, pre-installed, Specter Off-road sticker. Might be vintage? Maybe Marv even put it there himself, blessing whatever rig it is installed on with increased MPGs*
Shipping the complete hatch is going to be at least $60 or so depending on your distance. At least that’s what I paid to have a hatch in a little better shape shipped from CO to UT. If this doesn’t sell I’ll probably put the glass in my basement for a backup, or install it to see if my fuel economy increases.

*Fine print: Based on the fiberglass mesh repairs to the bottom lip, I don’t think the spirit of Marv gives two S#*&s about this hatch. 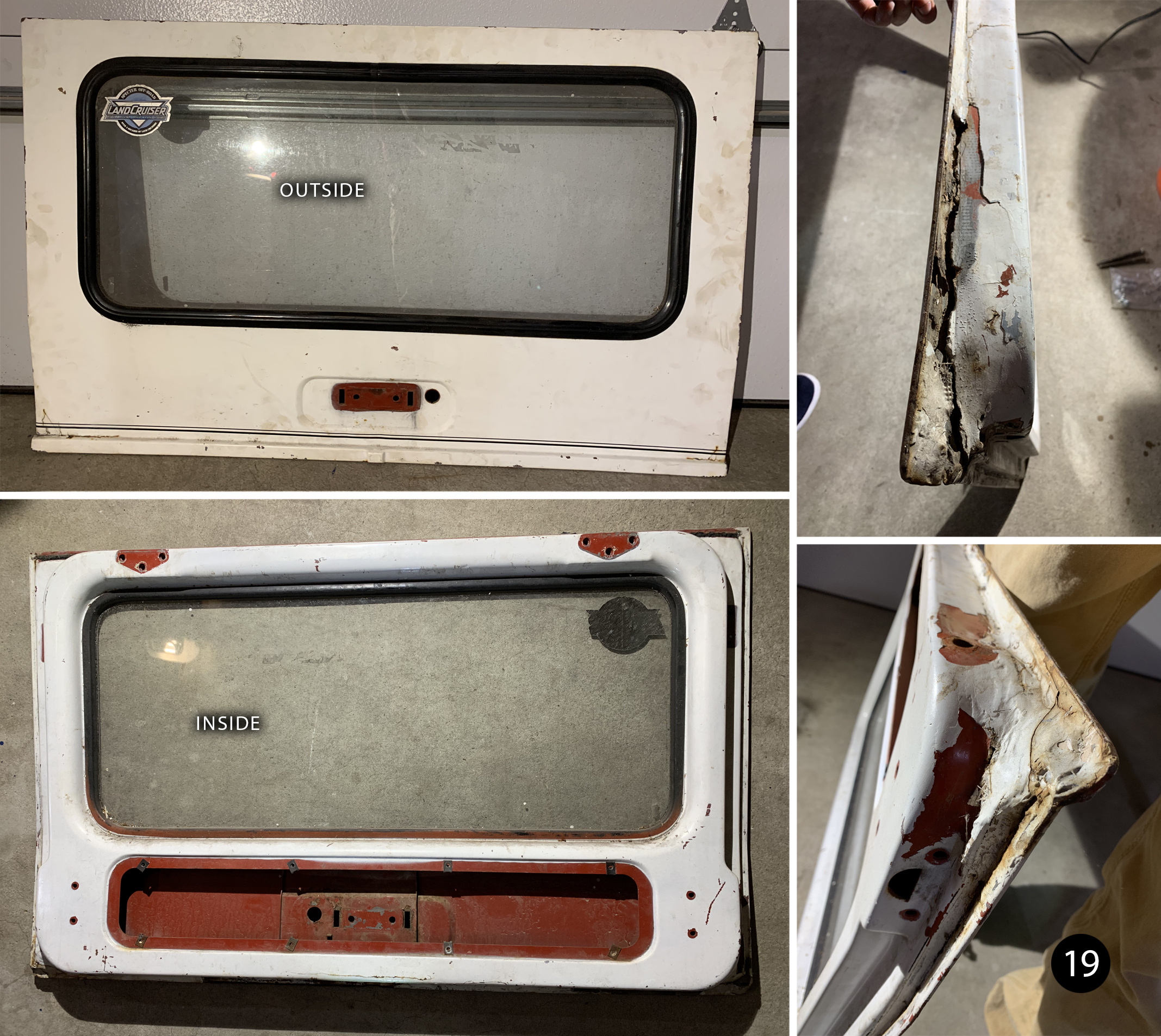 20. $100— Barn door hinges. All 4 work. 3 swing in the wind, the other one needs a pinky push to move. ’74 and earlier. The cruiser gods blessed me with a tailgate and hardware, so I sold my barn doors and don’t need these. 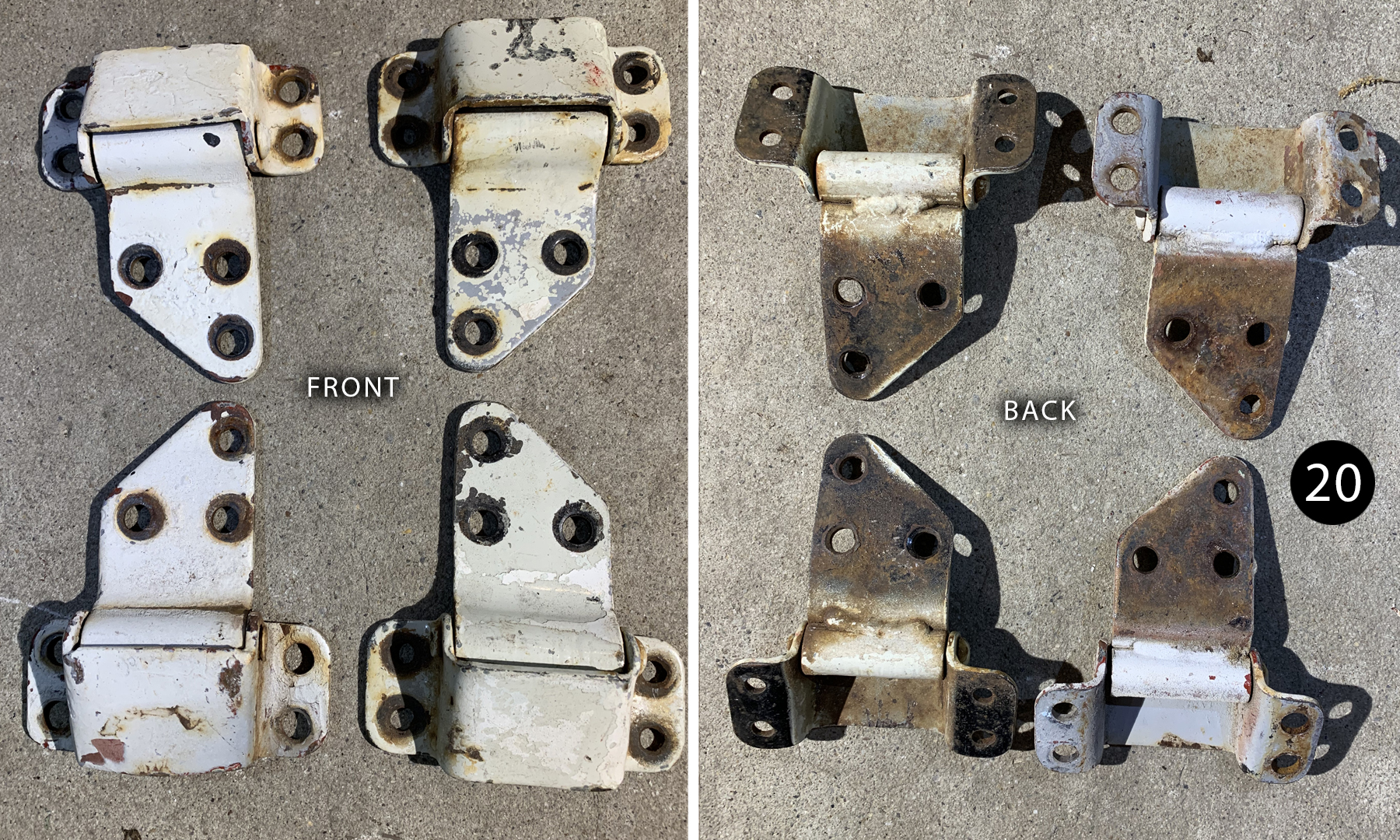 21. $10— Ashtray housing. Her age might have her a bit wrinkly but a little face paint and she should shine right up for a night on the town. Surface rust/chrome peeling. I was going to cut off the recess and install a front plate for extra switches. After the work and money I put into the rest of the dash, only an OEM ashtray would do. Thanks again @RAGINGMATT – I’ll admit a little sticker shock when I first got my bill, but honestly, it went away instantly when I received my knobs, I keep glancing at them in the dash and thinking they are new. Everyone check out his new website too. VintageTEqParts.com I’m VERY impressed, he put it all together himself with no web development training). My switches will have to live elsewhere. (The only thing I see similar is a “buy it now” on Ebay for $15+ $9.50 shipping) 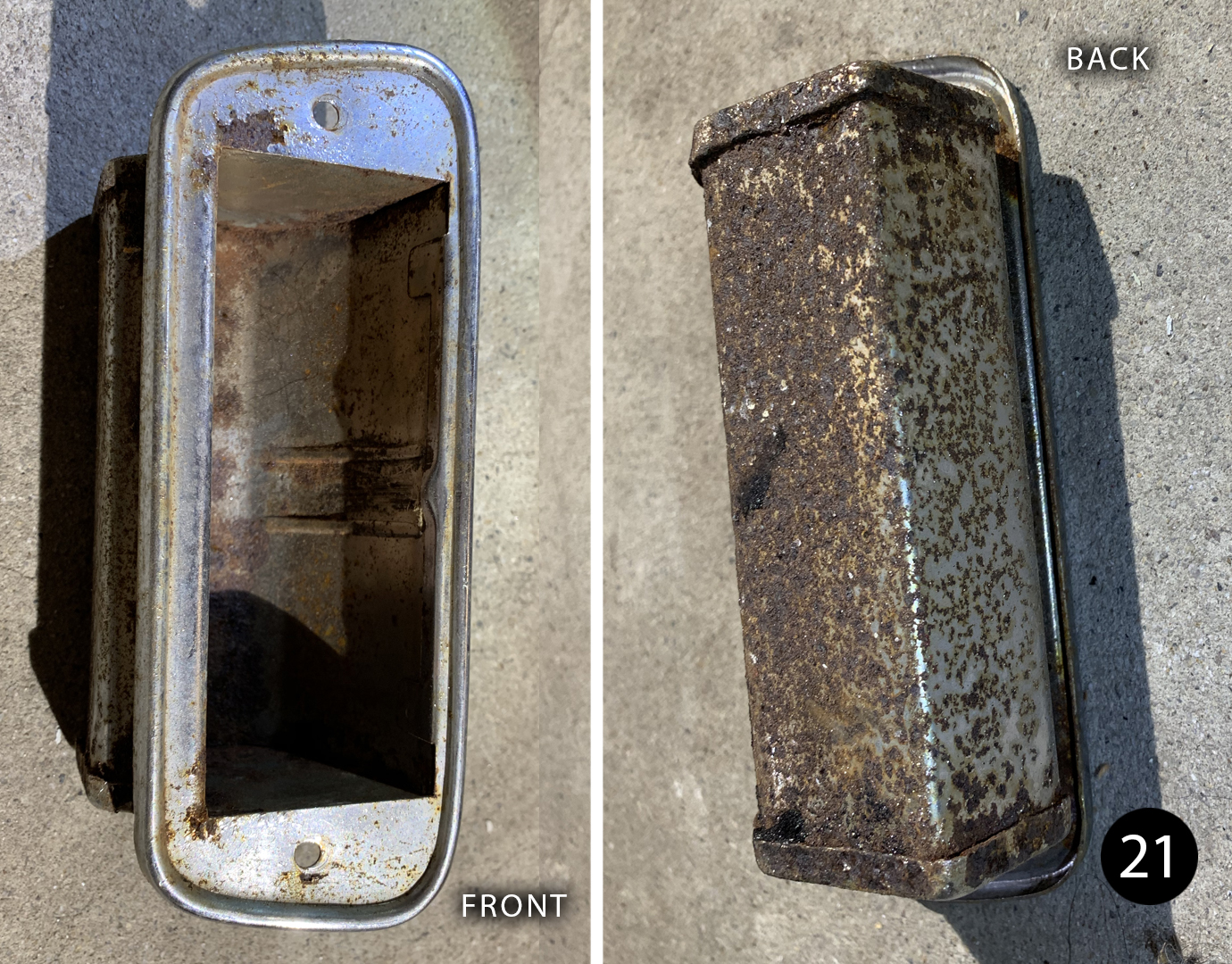 22. $5— Mixed breed cigarette lighter. If it were a dog it would be “designer” and they would call it a “cancer-poo” or something. The empty OEM 12v socket came in my truck. I bought the aftermarket plug on Amazon. Never wired up. I’ve gone a different direction. 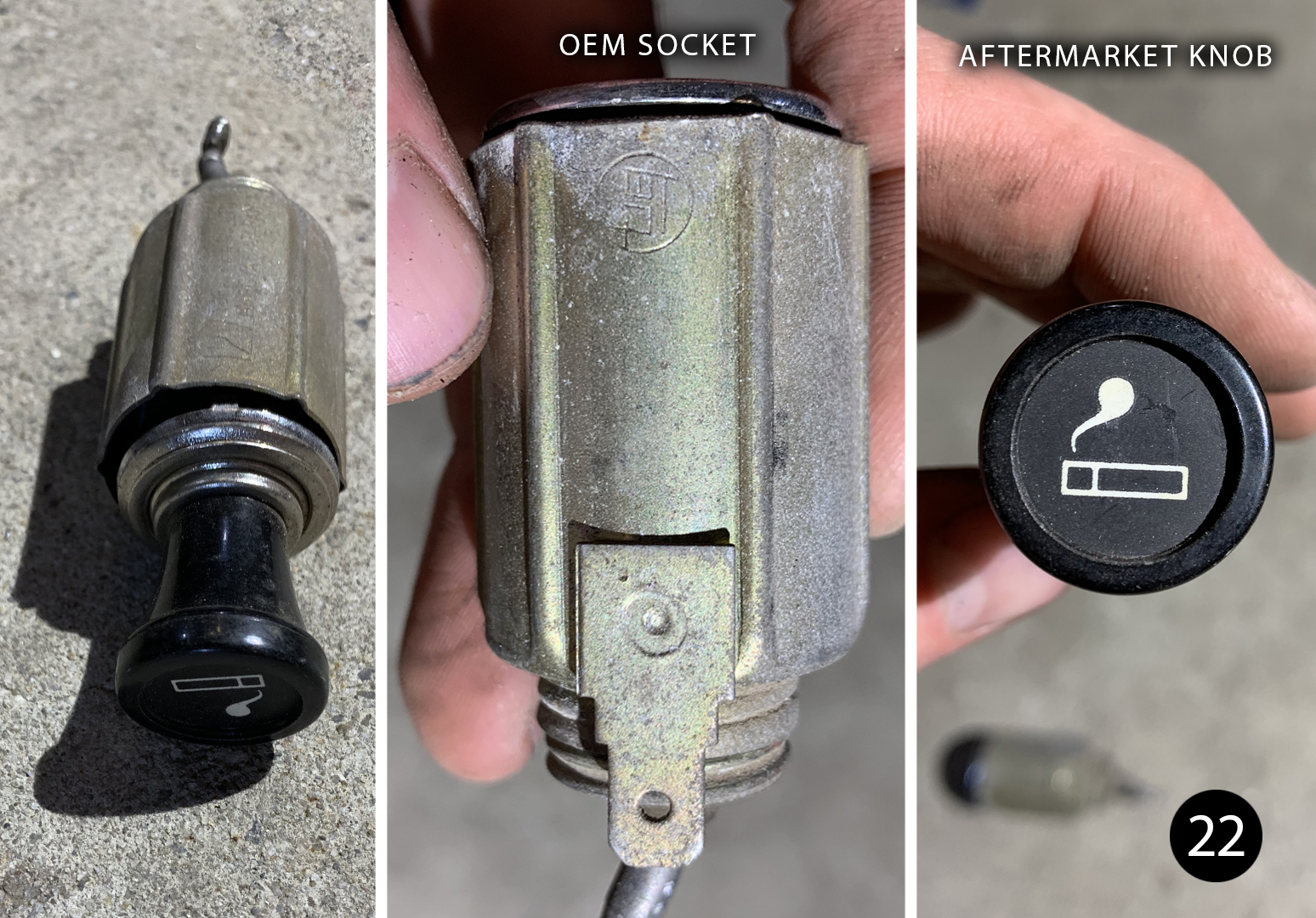 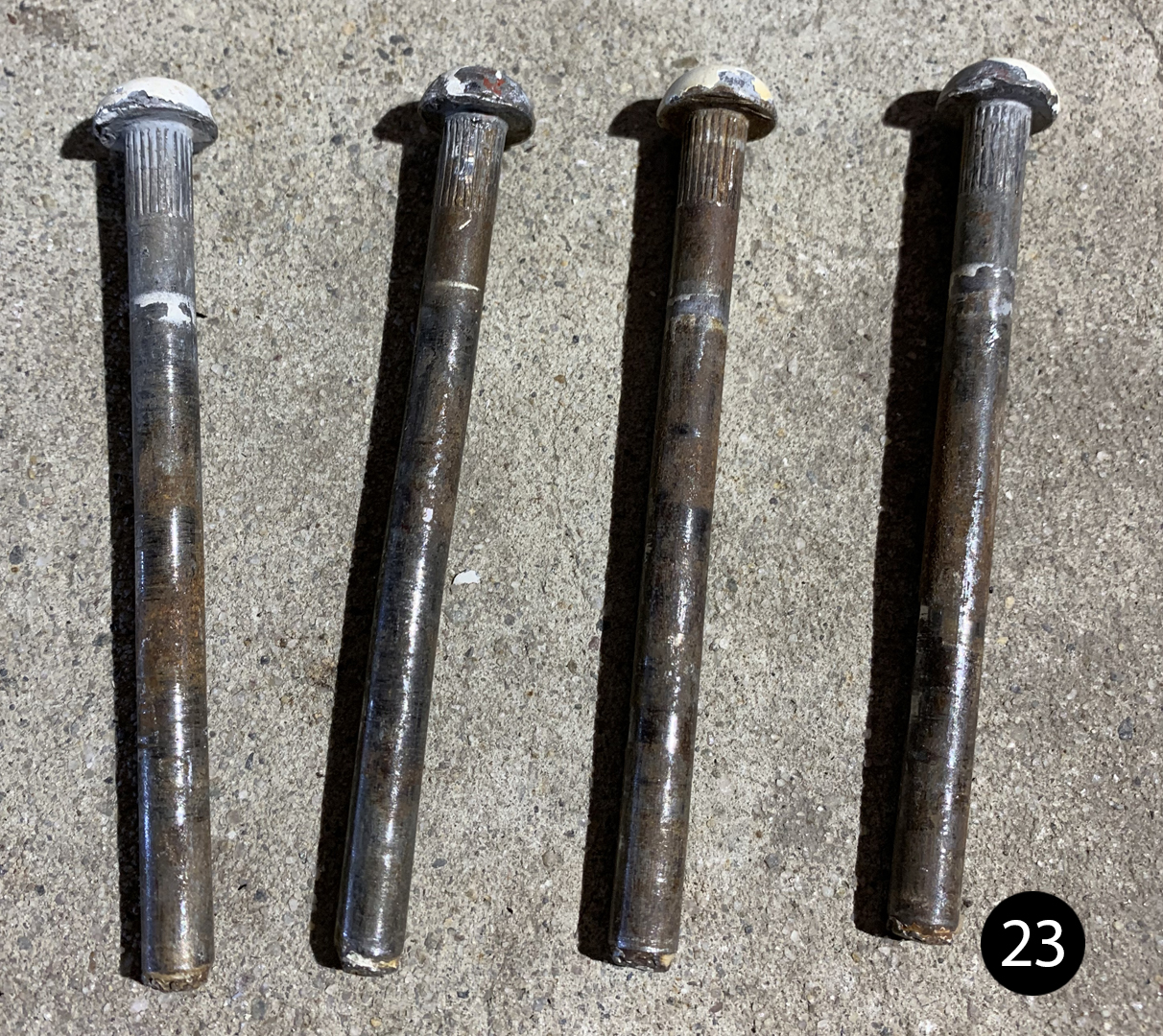 24. $5 (for all 3)—Mirror mounting balls. For some reason I had 2 mirror heads for sale, but 3 balls. Better too many balls than too few I always say. 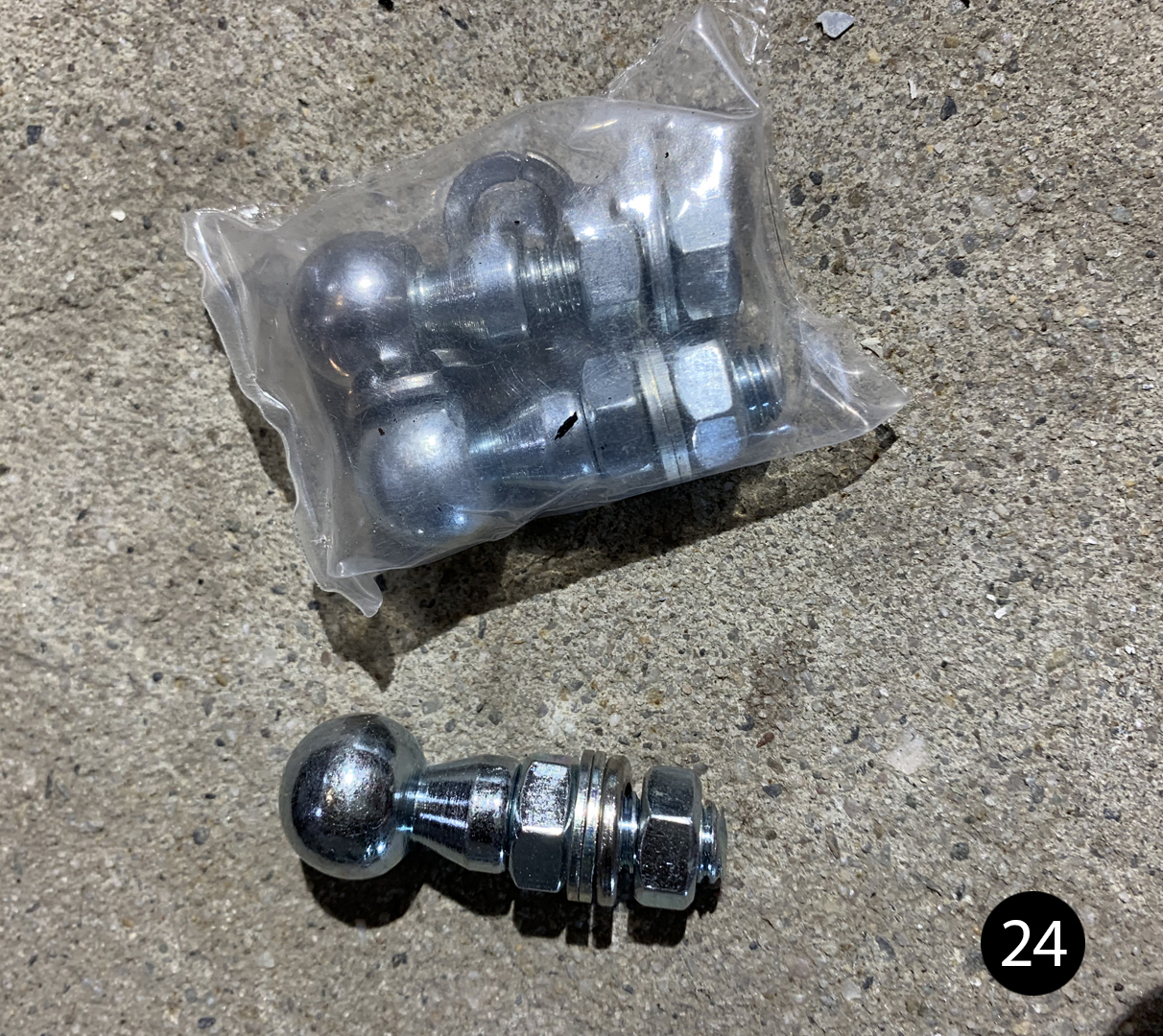 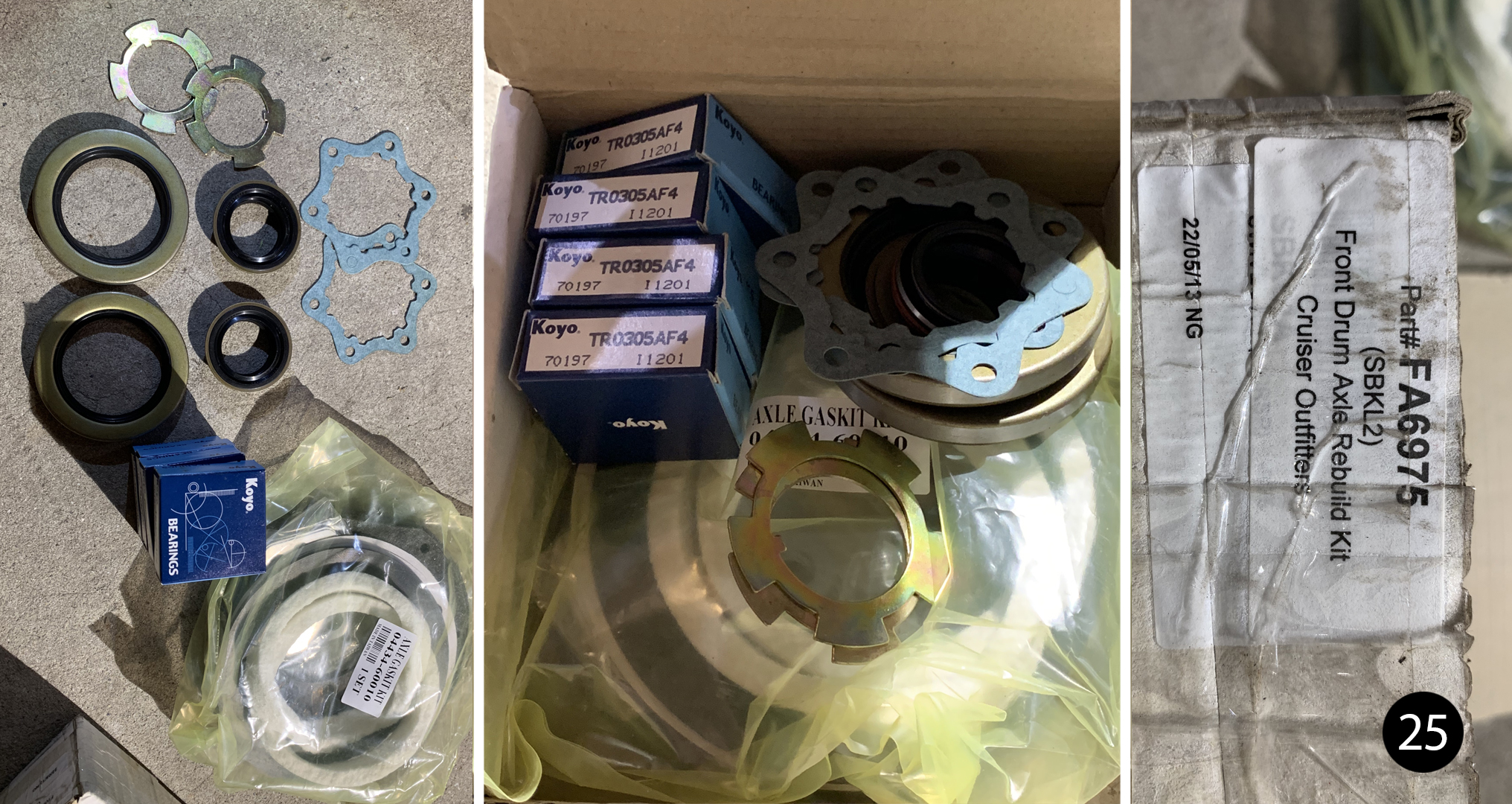 26. $15— Emission control unit. This was sitting under the cowl. Alone and neglected. I imagined it as a character from Toy Story. It can’t be happy under there, forgotten. The cheapest comparable unit I can find is also from a ’74 on eBay for $25+ shipping. 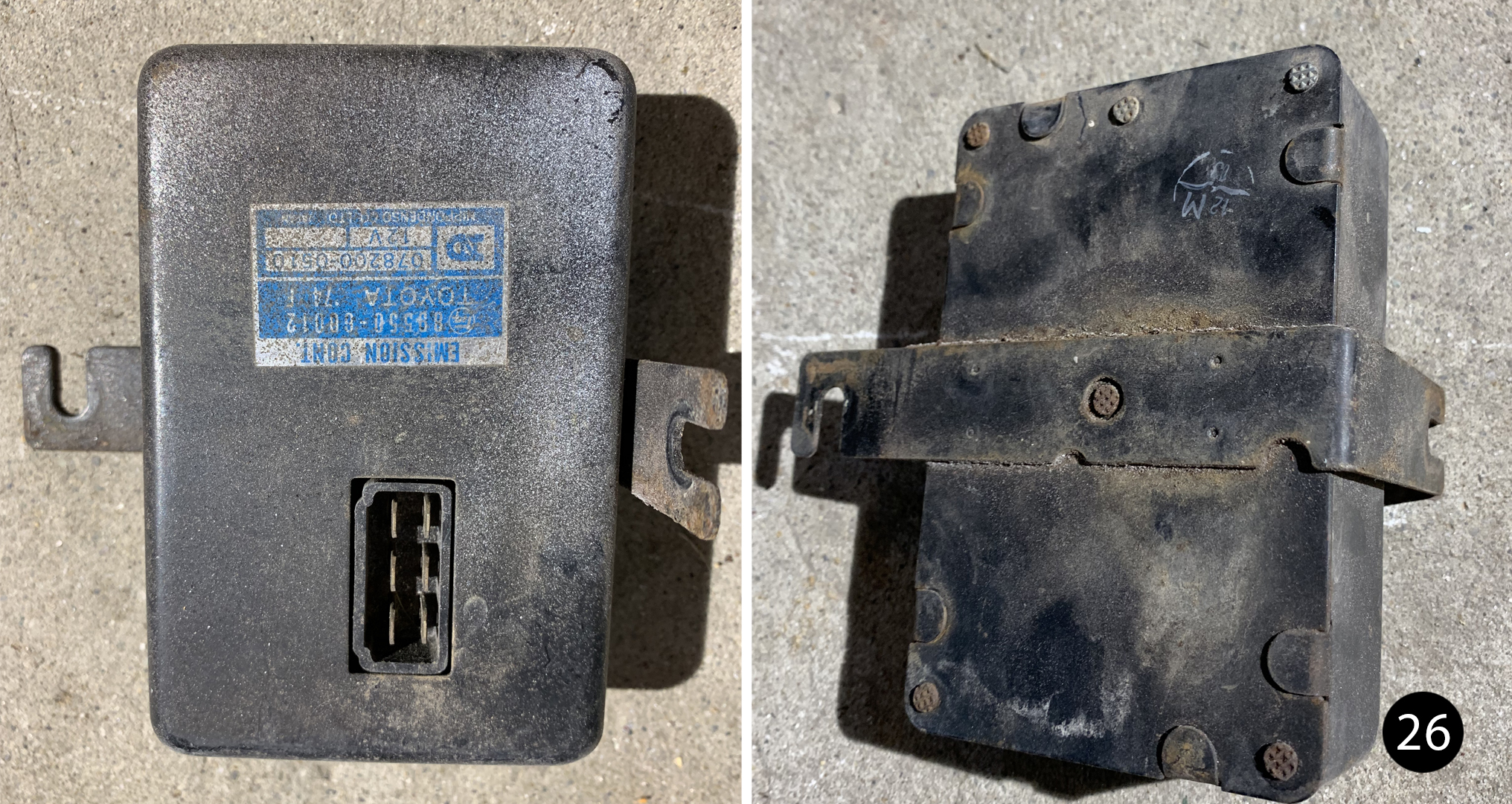 I would like to buy #15: lock knob w/set screw if you can stick it in a cheap envelope.

Will wait to hear back from you.

any updates on #15 ?
You must log in or register to reply here.