I would like to share my experience with Toyota at Overland Expo East and I think most of you will appreciate it.

I volunteered to work a tent (Geyser, look it up) at OEX East to get a free ticket in, but still had a lot of free time to enjoy myself. So Saturday I was driving around charging up my batteries and looking at rigs when I came across this really nice looking 60 series (1st pic) and I stop my truck to get out and to take a look and chat with the owner, a guy who turned out to be named Mac McKenzie. So while I'm briefly chatting with Mac this second guy comes up and says "hey we're leaving in five minutes to hit the trail." I ask him if they are going to do some wheelin' locally and he says "yeah you wanna come along?" Of course I say sure and he indroduces himself as Bob walks away to do some last minute stuff. Mac looks at me and says " Do you know who that is? That's the senior project manager for Toyota Development in Michigan."

So I think that pretty cool and eventually several other guys come over and introduce themselves (Mike, Sheldon, and a dozen more) and we take off for the trail. While we are out there I realize all of these guys know each other and I ask Sheldon "who here doesn't work for Toyota," he looks around and says "Just you." Now I'm starting to realize I'm out on the trail with 15 Toyota engineers and project managers and other assorted genius types who are now starting to push me to do more and more stuff with my truck. Mike takes his 79 Series over a particularly tough little climb (2nd pic) and gets out and looks at me and says "You're gonna try that too right?"

I'm having a blast (obviously), they are having a good time watching me play with the toys they all helped design (I don't know if any of them actually had anything to do with the 100 Series). and 5 hours later, after It's all done I'm talking to Mike and he says "hey you wanna come back to our camp and eat dinner and drink beer with us?"

Come to find out Mike is Mike Sweers and Bob is Bob Kupina, some people here might know these names, they knew several people from the forums here like Kurt from @cruiseroutfit and @woody.

Well these guys are salt of the Earth man, they spent the whole night drinking beer and answering all my dumb questions about AHC, DSC, ATRAC, they gave me a koozie that says "I suck at overlanding," (4th pic with Sheldon), and then around midnight Bob says "why don't you show us everything you have done to you rig?" SO I spent about an hour going over all the mods to my truck and getting constructive feedback on things to look out for and maintenance to keep up, generally having a great time. Some time after midnight having spent the last 12 hours in a daze I head off to park my truck and go to sleep.

And that's my Overland Expo East Toyota story. Final pic is the aftermath. 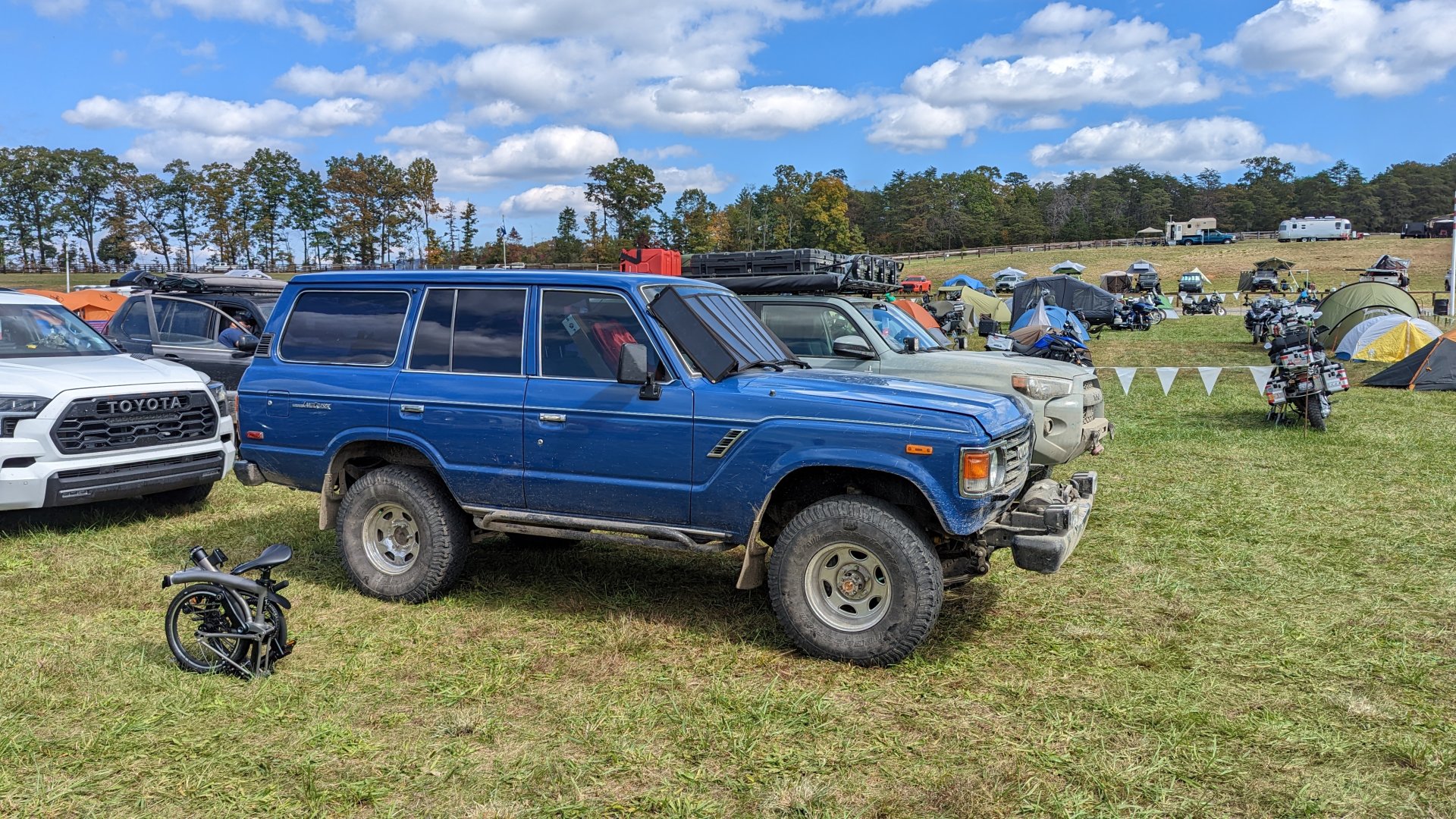 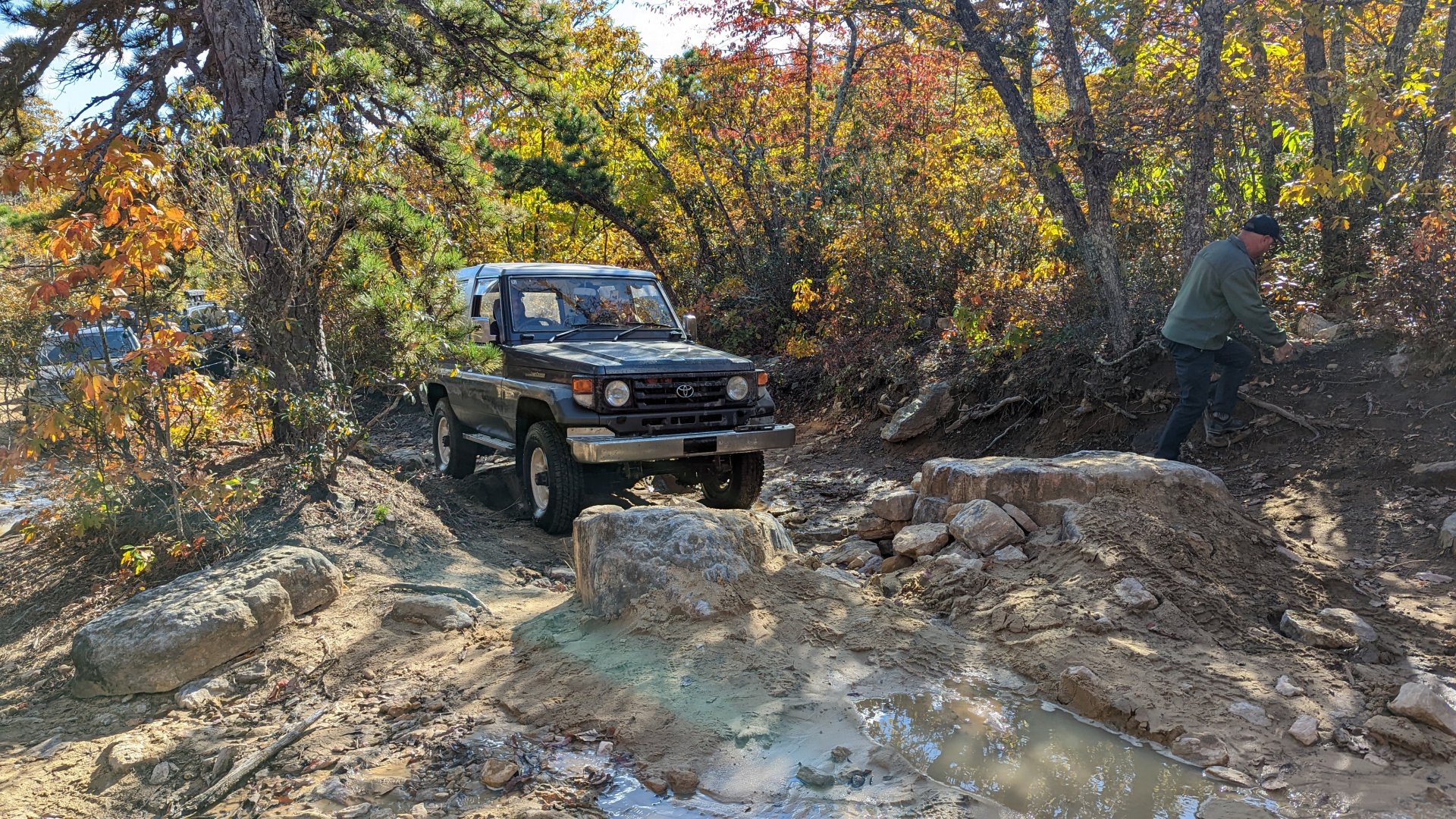 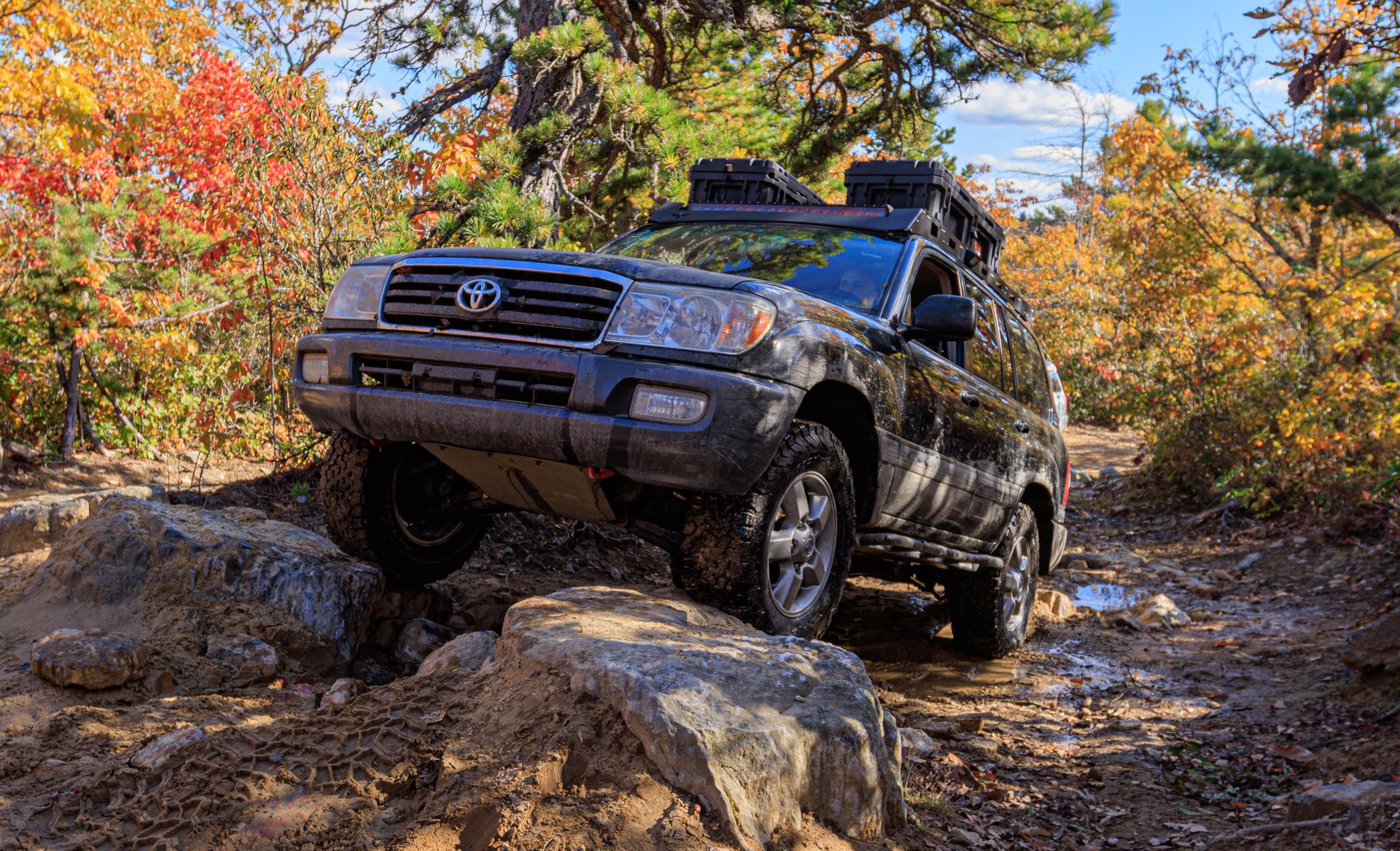 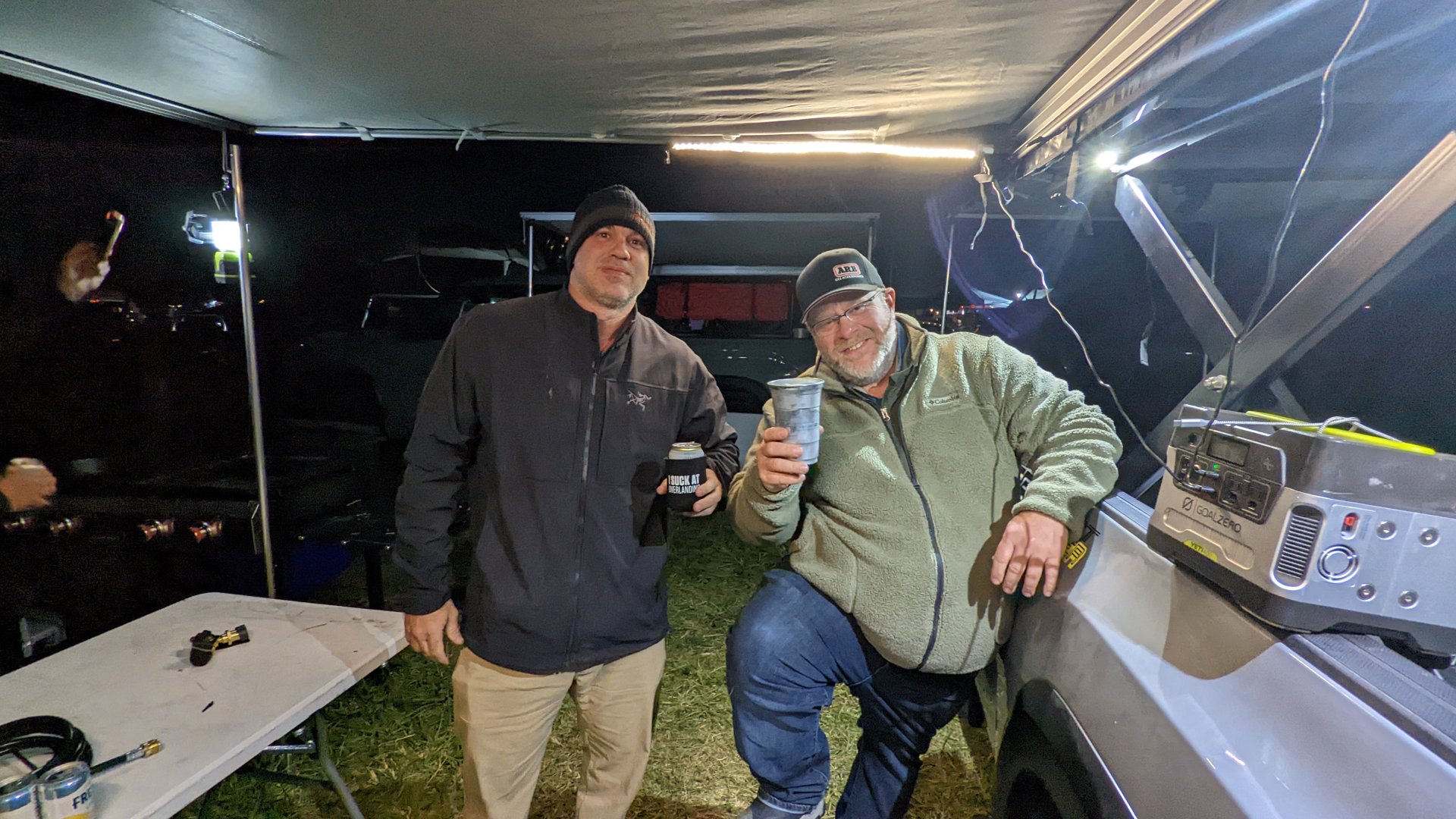 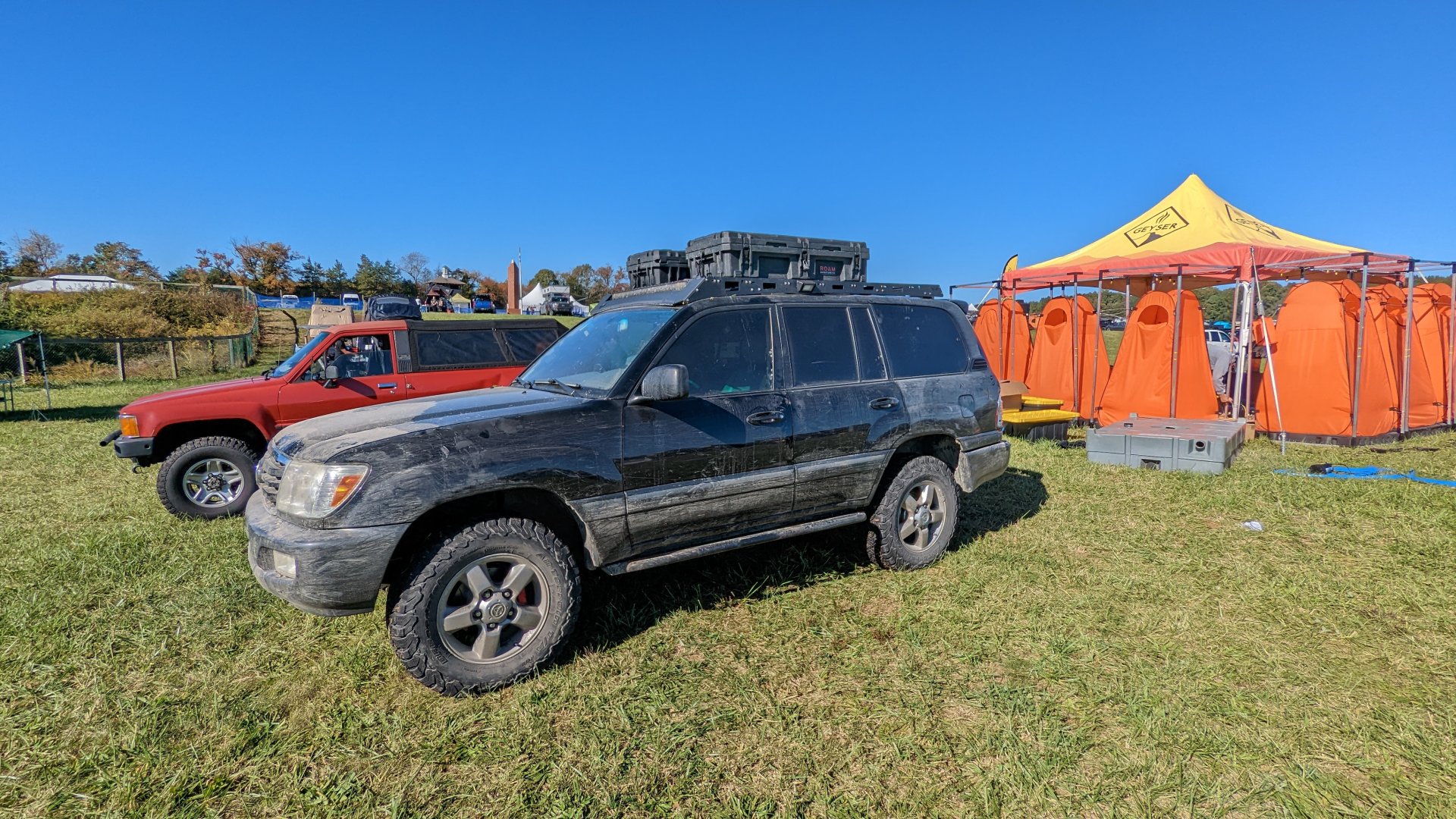 Funny stuff. Those are great guys and I've enjoyed some great days on the trails with them too 😎 Glad you were able to meet them!

Fwiw they cover the US platforms, Tundra, Tacoma, Sequoia. Why they don't do the Land Cruiser, they are absolutely enthusiasts and great community members within Toyota.
Kurt Williams - TLCA - U4WDA - Tread Lightly! - Wasatch Cruisers
Cruiser Outfitters
Your trusted source for OME-ARB-AA-AISIN-Dobinsons-555 - Since 1992
ORDER 24/7 @ CRUISERTEQ.COM
ExpeditionUtah - A lifelong project of exploring Utah
info@cruiseroutfitters.com

The Toyota group is always a great time and super supportive. Can't beat luck like that

Man I should have asked! But I did get their emails and maybe a couple perks I'm gonna keep to myself.
2006 Black UZJ100 LC

TreatSmash said:
Man I should have asked! But I did get their emails and maybe a couple perks I'm gonna keep to myself.
Click to expand...