ToyotaMatt said:
i in no way mean any dis-respect to be klear , you have done a excellent job outlining the step by steps in the first posts of this thread


the the metallurgy of Toyota locks , keys , and internal parts tumblers , springs , cylinder cores and bores is different then the same era Detroit big 3 had ,

After Robert and the DENSO and Nippon family's had a TIFF , you can call it , all 3 split and there simply called DENSO now , BOSCH is BOSCH and

the NIPPON's are lost to pages of history ?


TORKAIRIKA , still was TORKIRIKA during most of the 91-97 80 series production , but scooped up by BOSCH and now goes by TORKIA only under the watch full eyes of BIG brother bosch

in the 1990's TOKAIRIKA used ALL steel tumblers and a Pot metal cast main lock cylinder , and a magnesium core or bore , part that rotates , our friends key is binding in and stuck bad from what he discusses above ?

i admit i had to and wanted to , dust off lock and key 101T student training manuals , because , in my 30+ years since T-TEN i have never crossed paths

with a person trying to fashion there own Toyota key with a hand file ? this is new and unique and different ....


and after he added the additional tech and facts , or as i might put it lightly , fessed up and came clean on the story of how this key became randomly stuck to


i sat back and sipped a ROLLING ROCK , and indeed ponder the next move here ?

i can openly admit , i don't know SH#T about self fashioning any Toyota key , but now i have decided to help the person , get un-stuck because that's the right thing


if anyone thinks its all HAHA HA toyotamatt blew the dust off his T-TEN bourse books , photos or it dont exist rules apply 100% is fair


- when he wakes up i am going top offer @VonArnim a face time , to see closer if my snap ring idea will work ? if not he can mail me the lock stuck key inside and

all take a solid crack at removing key carefully and making his ign. - lock a quick as possible tuen around for him , there will be NO service fees involved here for him

i hope i explained the graphite use in a toyota well enough for you to understand ?

Well not really, other than steel, pot metal and magnesium.

The only thing that gets my attention there is the magnesium. The metal properties may influence usage. Now I will read more.

I'm all for helping if possible. I'm guessing the pins have hung up on a worn area and he needs to jiggle, bump, and rotate at just the right combination to get it out.

I think percussive maintenance is in order.

BILT4ME said:
Well not really, other than steel, pot metal and magnesium.

The only thing that gets my attention there is the magnesium. The metal properties may influence usage. Now I will read more.

I'm all for helping if possible. I'm guessing the pins have hung up on a worn area and he needs to jiggle, bump, and rotate at just the right combination to get it out.

I think percussive maintenance is in order.

your part of this TEAM here , and the very knowledgeable THREAD Starter in my opinion , hands down


- think of it this way , fellow member @VonArnim , found your thread you created on a similar topic , but not exact one , and posted reaching out for advise and

assistance because he is litterley stuck and can't proceed forward ?


that in itself in a good result of this thread at it's core , not that he is stuck , but that he found a place to refer to and post his TECH and issues in a group participation


we all are rooting for the key to become un-stuck at least i am 100% , i never asked if this was his daily driver , and if he has only on vehicle to get back and forth to

work or skool ? its really not my business to ask all that personal smack , but if so , it must be very frustrating to be stuck without a running vehicle right now ?


so , different well intended view points and contributing thoughts are what a good positive discussion on locks and keys on the 80 series are all about ,

and we have a chance collectively to help out a fellow member real time live get un-stuck , that's the real deal and a serious matter hands down to take serious

Well I don’t like to leave cliffhangers in threads so I wanted to post an update. No matter how much jiggle/twist/shake/push/pulling I did on this key, it was not coming out of the lock cylinder. I got a pm from @ToyotaMatt that said he may be able to help. He gave me his private number and I FaceTimed him. @ToyotaMatt gave me some ideas on how to try to get the key out, as well as confirmed to me that my cylinder appeared to be the original oem cylinder. We talked for about 25 min or so and he said if I couldn’t get it out he would help getting a replacement.

After messing with this thing for another hour or so I had enough and decided I was going to take the cylinder apart myself. Just to be clear @ToyotaMatt did not suggest this, It was my decision to drill the rivets out of the cylinder and drill out the top pin on my own. At this point I figured I would need to buy a new cylinder anyway. Below is a pic of the two side rivets I slowly drilled out. After that, I drilled, very slowly the top pin out (2nd pic).

After that I was able to gently pry off the front of the cylinder cap. The core then slides out. Mine was very gummy. I could tell some of the pins were sticking in place (3rd pic). After I got it apart I could push on the pins and release the key. I cleaned the entire thing with brake cleaner and an old toothbrush and made sure all the gunk was out. 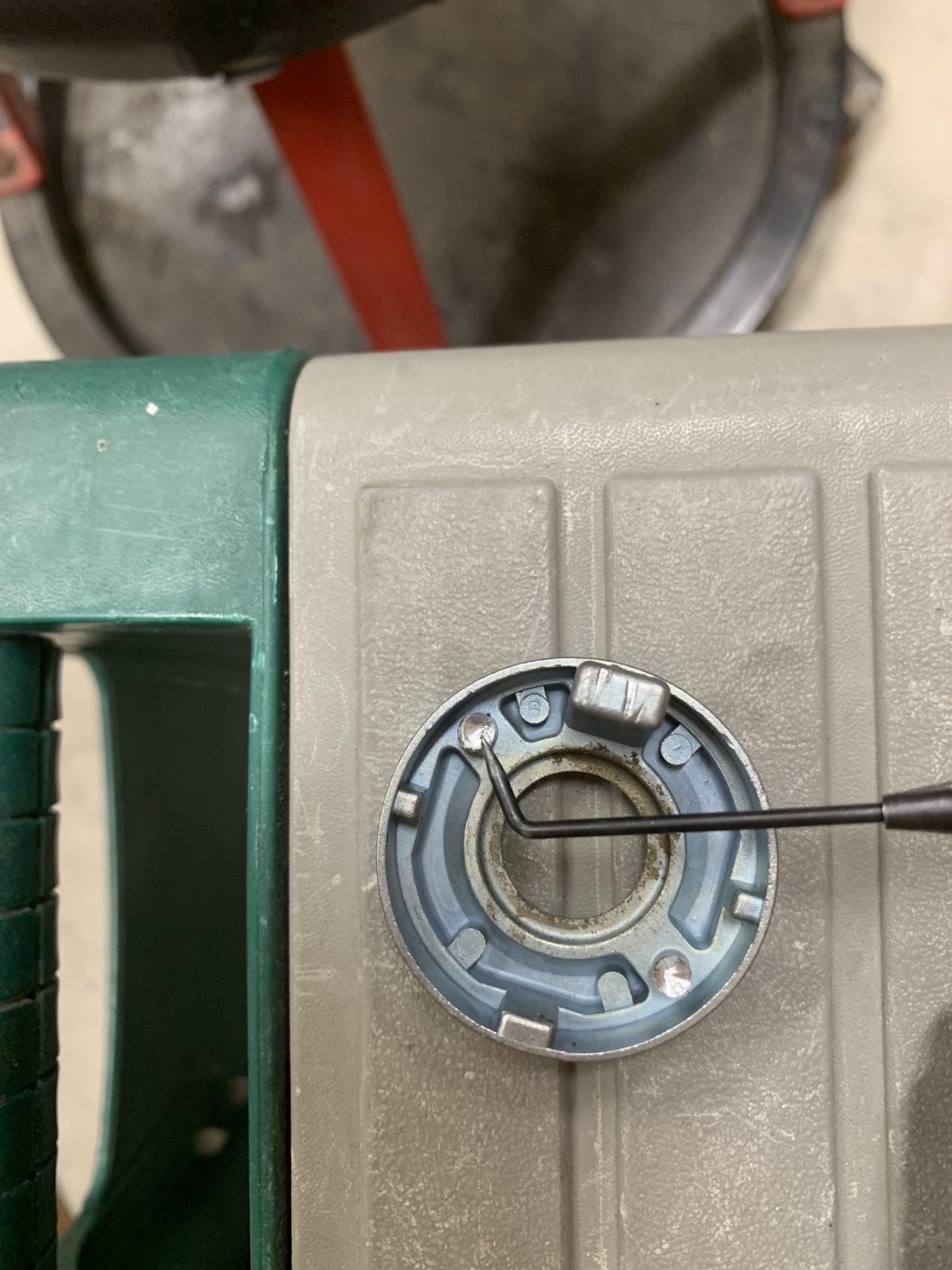 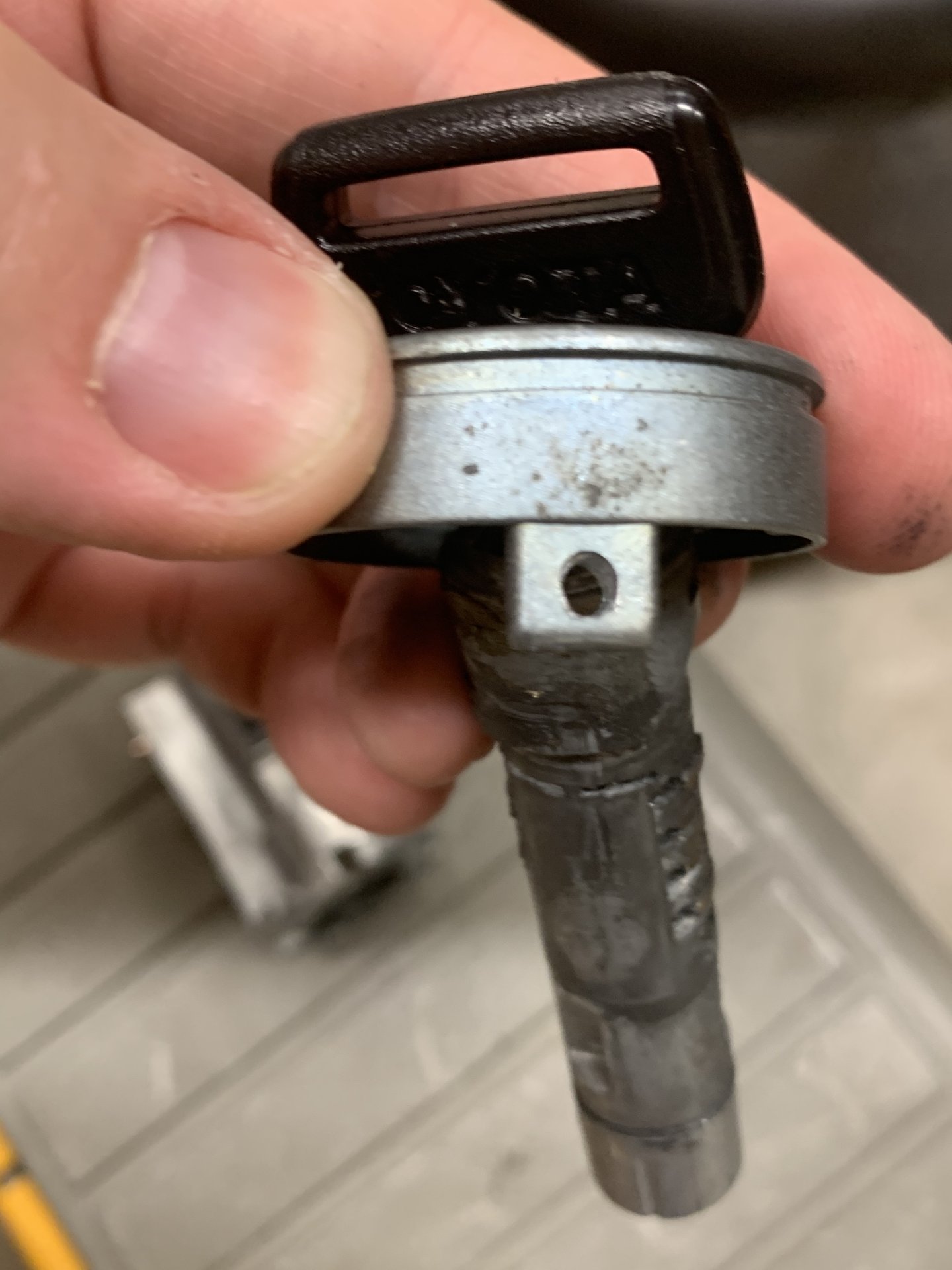 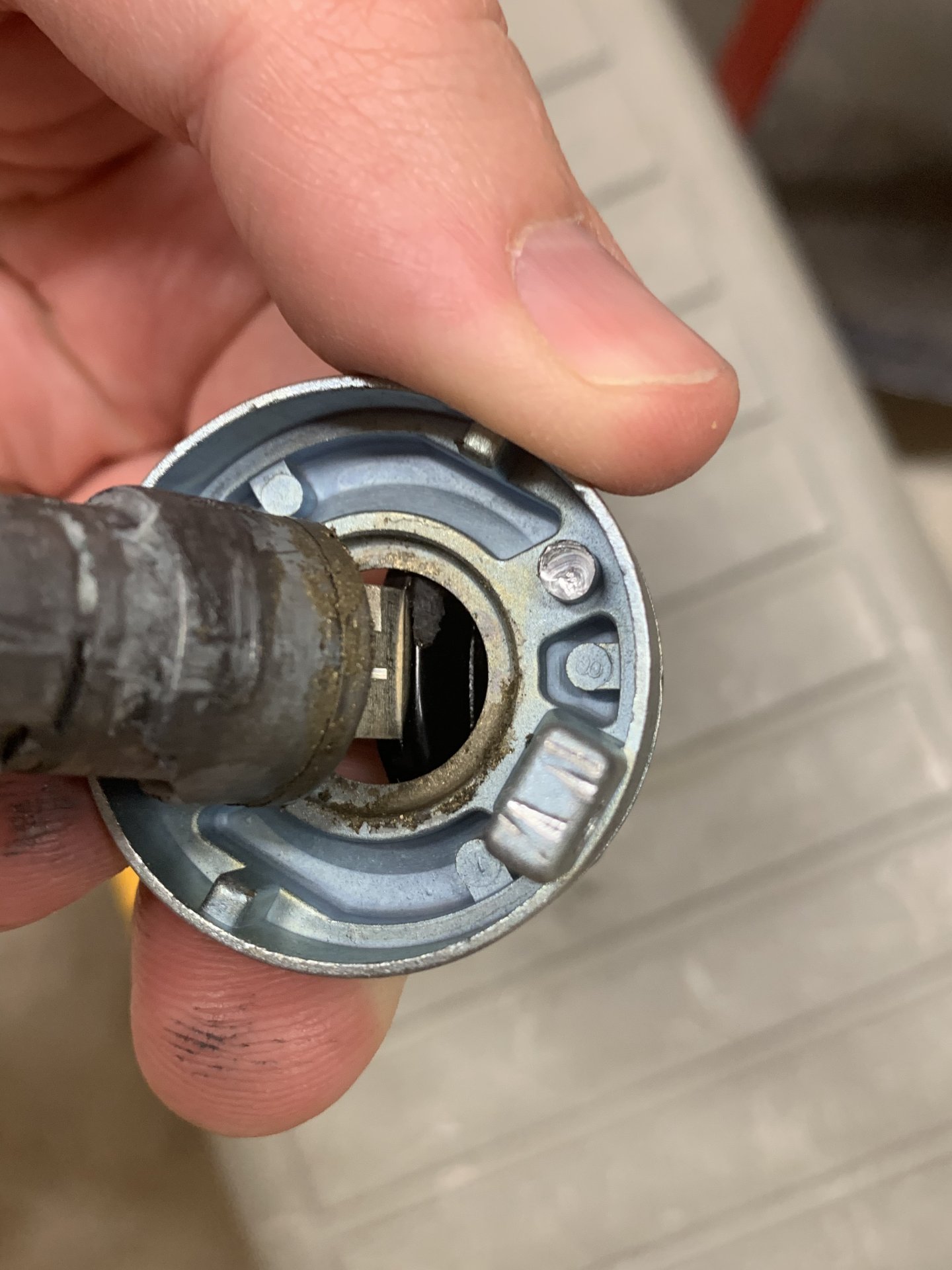 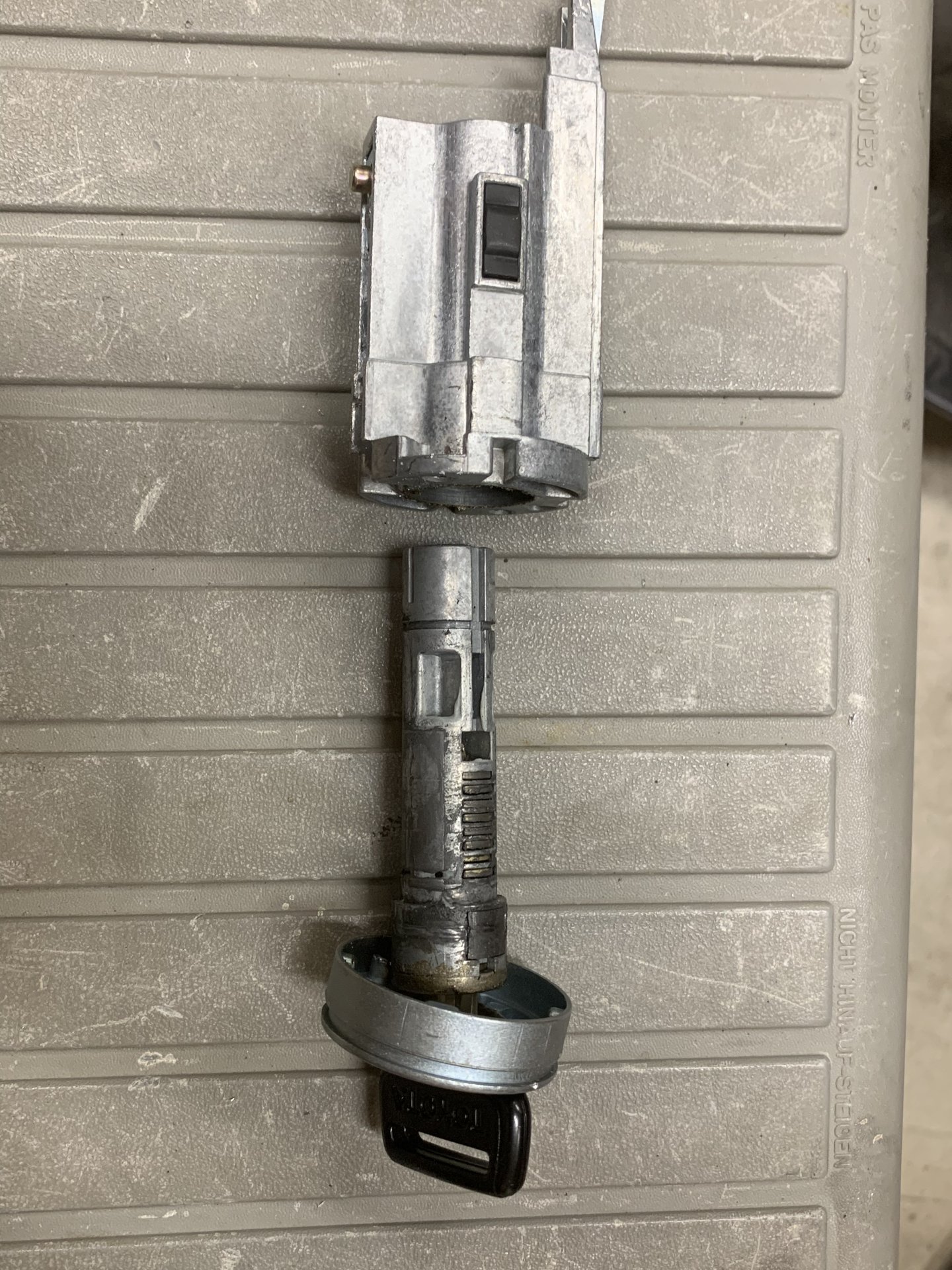 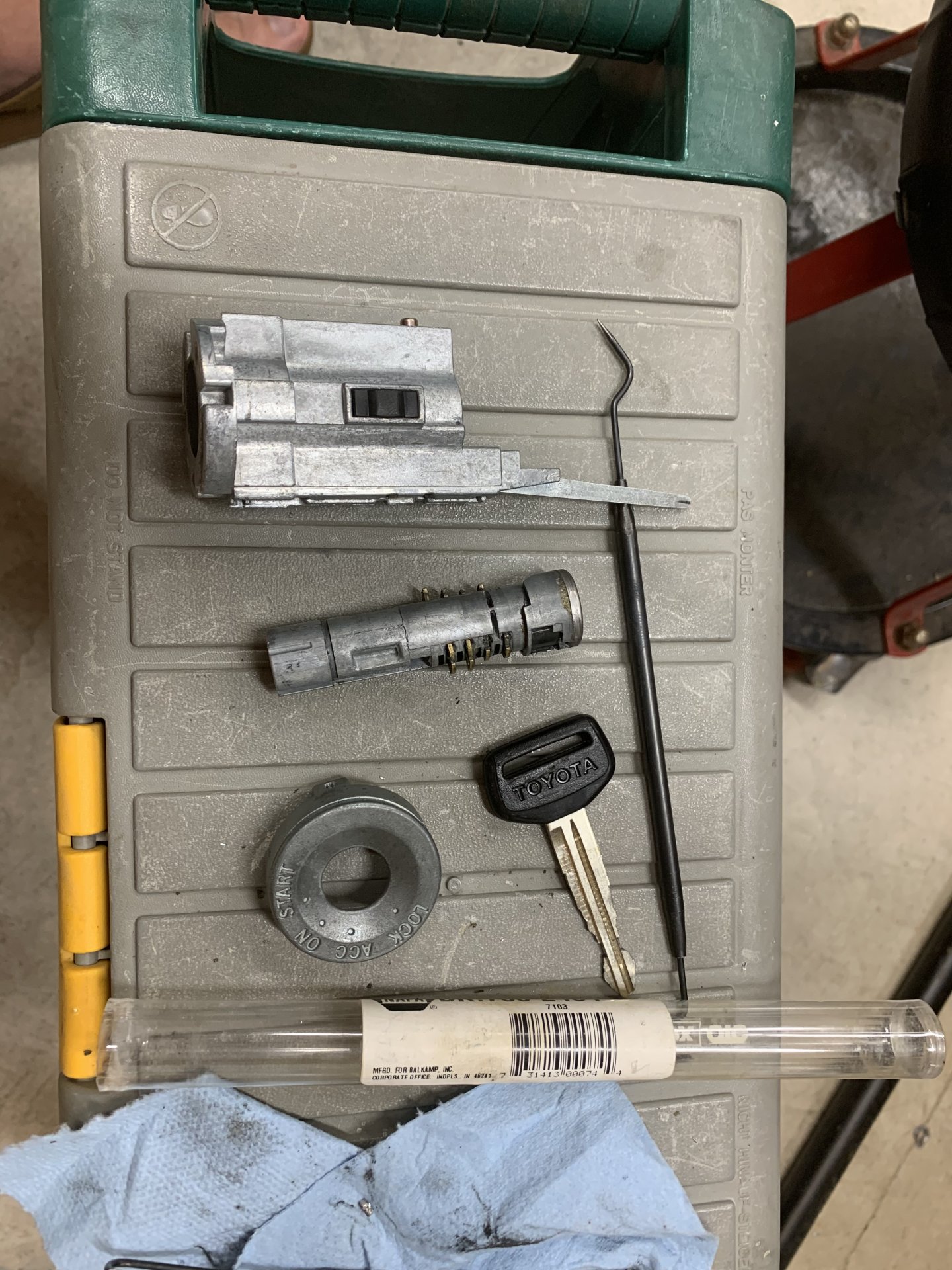 After cleaning this thing, I had a dilemma, how was I going to get it back together? These cylinders were never made to be taken apart. I decided that since the cap on the front was pretty tight, I would mix up some JB Weld and glue it back together. This seems to have worked well. I let it cure for 24hr before touching it. Here is what it looked like reassembled. I sprayed a lot of wd40 in the cylinder and my original trace copy key was working again. It wasn’t smooth but worked with some jiggles. Now I still needed better keys that truly matched the cylinder code. I was skeptical that someone could have rekeyed the entire car.

After calling multiple dealers around me to get a key made, one said they had a blank and maybe could cut it. I had to go in person to get the original key code from Toyota (which is a W series code). That dealer said they have new key code cutting machines that don’t handle the old codes anymore. Then I called @ToyotaMatt.

@ToyotaMatt was able to cut a key with his Nippon Denso OEM SST computerized code cutting machine. He provided me with this beautiful zinc plated Code cut key. Rumor has it that I may have the first “gold” key to an 80 series. Anyway the key works perfectly. No jiggling, no dragging as I turn it. It’s perfect.

A big shout out to @ToyotaMatt for talking with me on the phone and providing a service the dealer couldn’t. 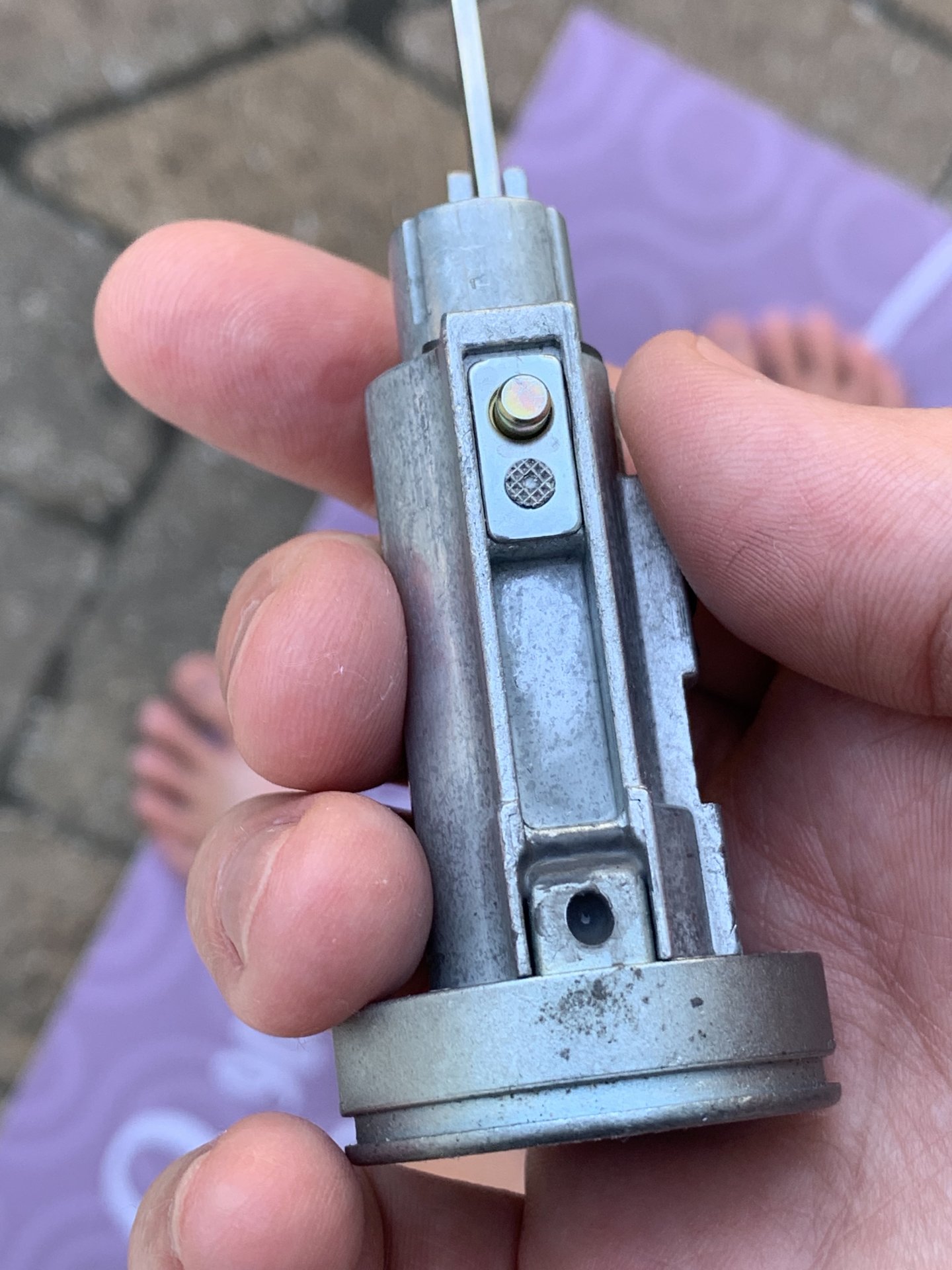 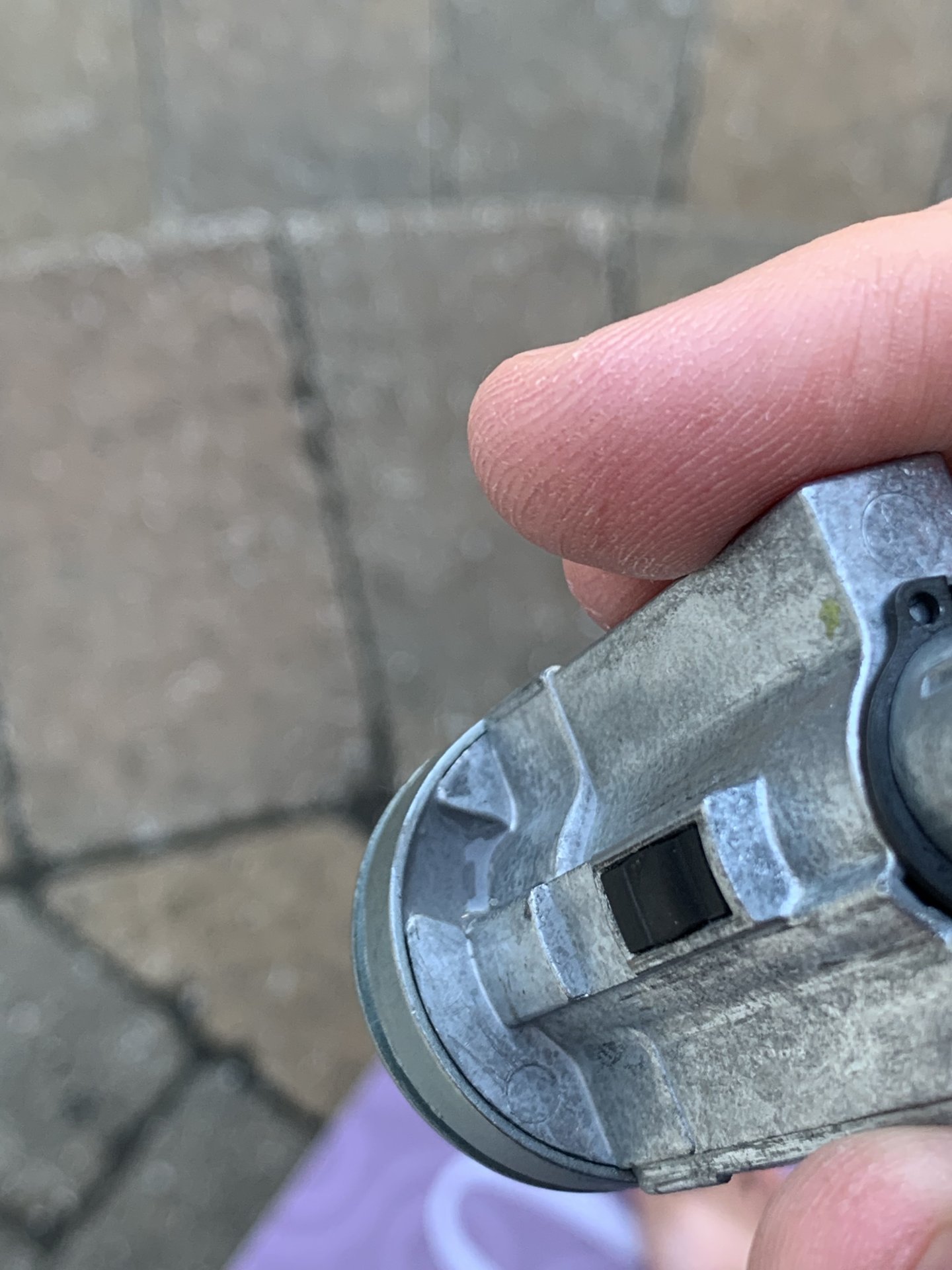 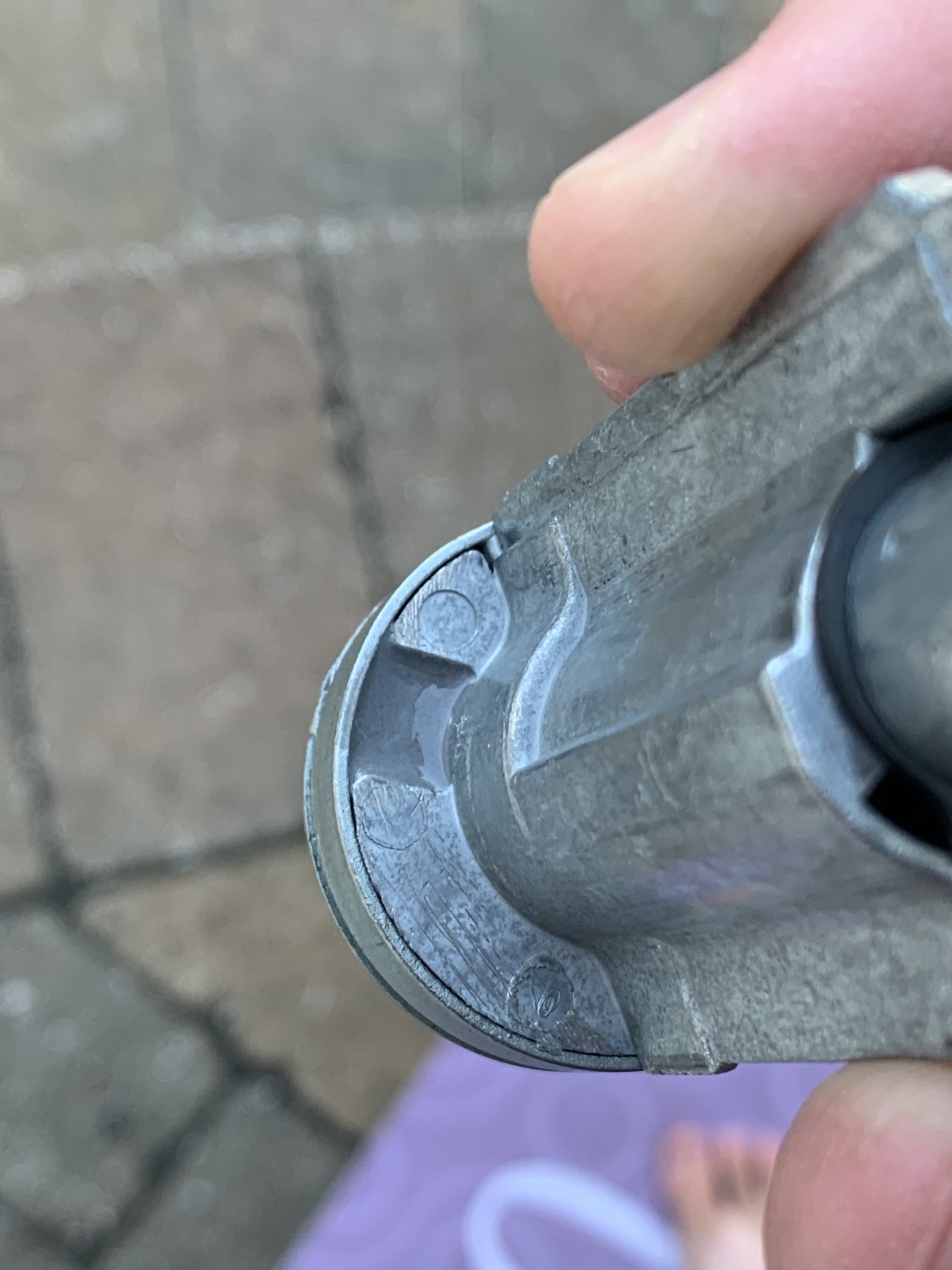 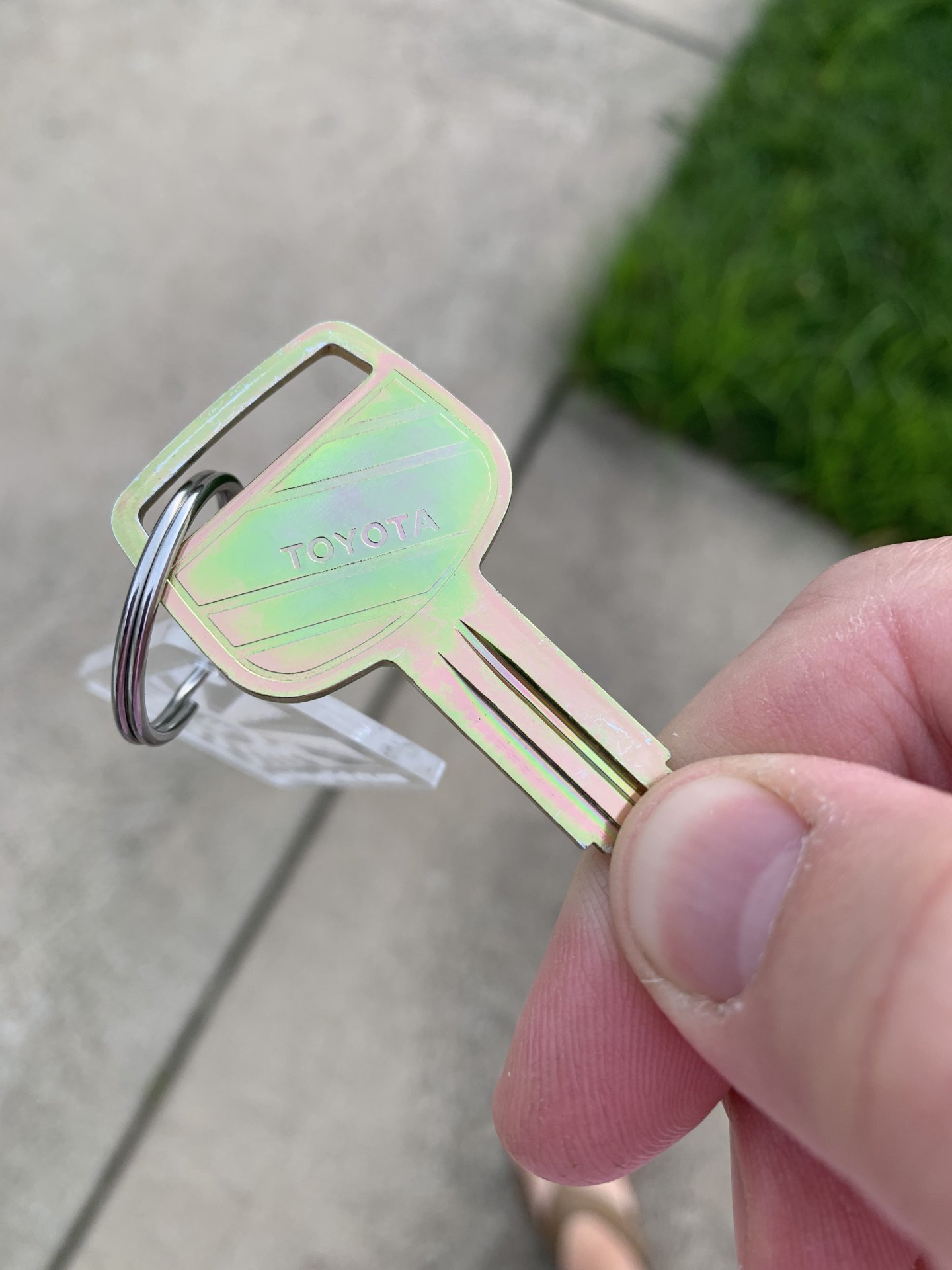 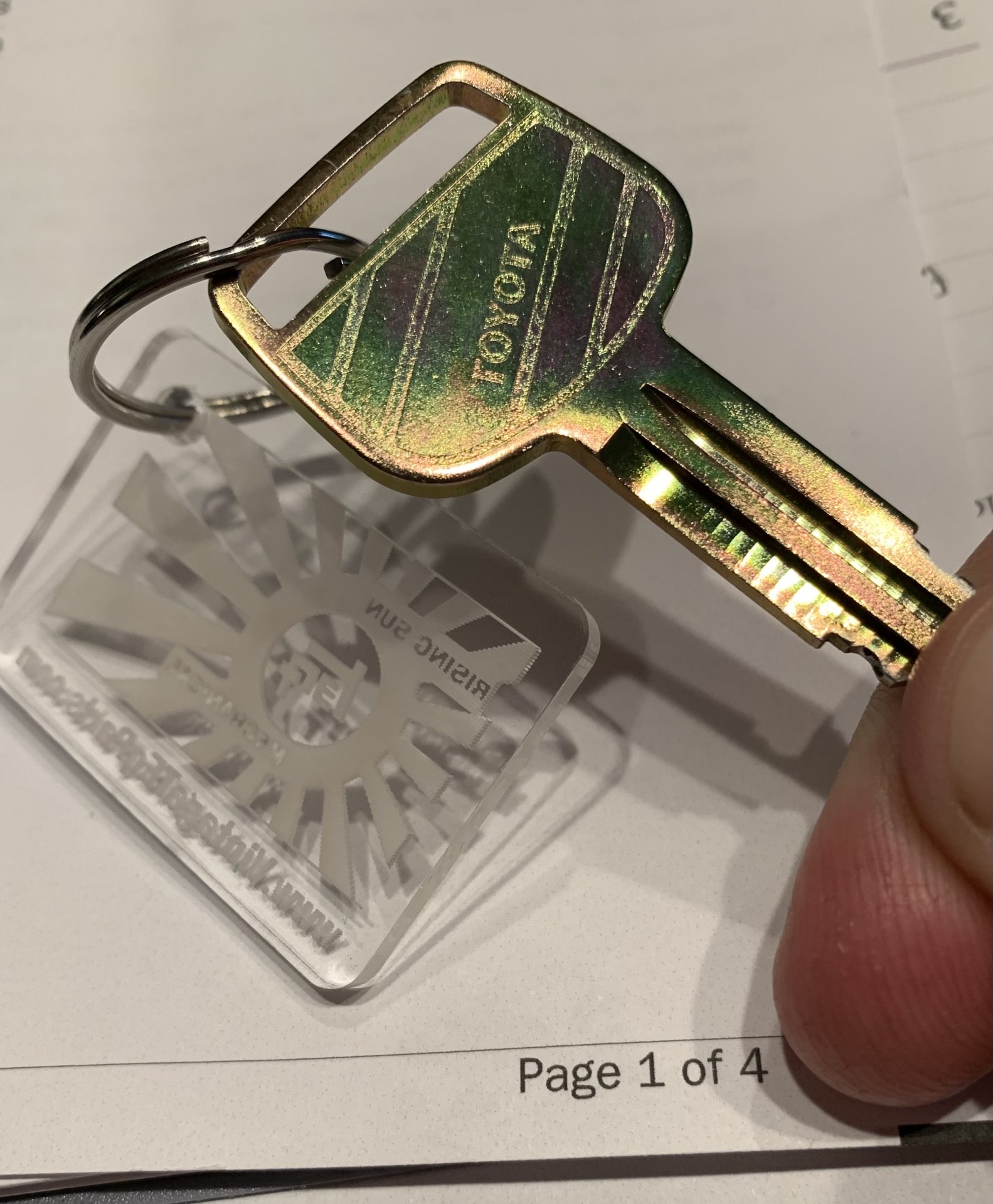