I'm seeking opinions, general advice and guidance. I took my time doing research but because of my circumstances I needed a car sooner than later, so I had a mechanic come and look at this one with me (private sale), who told me mechanically it was in really good shape. I bought it, but I'm still wondering if there's anything I should be looking out for.

I just don't KNOW all there is to know about it. This "automatic height control," is that generally a desirable feature or something that is actually a minus to a more experience buyer? This car self-levels for me at EVERY stoplight. It's actually hilarious. Besides the timing belt and water pump, should I keep an eye out for other things? Does anyone know of someone more experience in these vehicles in the greater new york area?

I was half-considering making the trip down to VA to have this thing overhauled/serviced at OTRAMM. Thoughts on this?

The good:
- Low(er) mileage
- serviced very frequently
- the mechanic who came with me to inspect the car saw no leaks, no mechanical issues and no problem areas - he mentioned the suspension would eventually need to be replaced if it were this old
- no lights on the dash
- all the bells and whistles work
- third row seats were never used
- 2nd row seats in 8/10 condition

What needs fixing:
- the previous owner said the timing belt was recently done, but he didn't seem to know for certain
- air conditioner works but is not ice cold
- needs new wipers
- needs a new double din radio (owner took his with him because of all his saved contacts)
- sun roof seems to have a very small leak (or maybe I didn't understand the closing mechanism and didn't close it all the way before it rained)

Cosmetic stuff:
- 3 golf ball sized dings on the body
- rear bumper needs to be realigned
- a 6"x6" (roughly) area on the hood where the clear coat is starting to fade
- the rubber trim on the exterior where the windows recede into the body is cracking
- needs new upholstery for the two front seats
- middle console needs to be reupholstered as well
- steering wheel woodgrain is cracking
- passenger side wood trim has lost all its varnish
- needs a lil' detailing, TLC

The car was leased by the dealer for 3 years, 36K miles, and then bought by its previous owner, from whom I just purchased. He continued to have the car serviced at the dealership for the next 17 yrs. The Carfax show that the oil was changed every 5K, religiously. One small accident in June of this year, as you can see the rear bumper is slightly unhinged. There are dings, there are scratches, there is cosmetic wear but nothing eye-grabbing. There is strangely very minimal rust on the bottom of this vehicle. I will get around to rust pics.

The car was sold originally and driven primarily in Long Island, in NY. The roads are....disgraceful lol.

It was never taken off road, but I do consider NYC roads a version of off-roading - a patchwork that kind of equates to driving over moderately rocky terrain. You'll hit a swath of completely f**ked road while traveling at 50-60 on the highway.

The story is that I really needed something to get me and my partner to and from work everyday. She is more susceptible to the virus and we are avoiding the train. We also sometimes have to travel for work throughout the tristate. Also have to transport lots of film production equipment weekly so I needed something with cargo space. So I'd been doing research and I was dead set on a 3rd generation 4runner, thinking an LC was out of reach, but I kept it in my back pocket and this one I luckily found after refreshing my craigslist search.

I'm a New Yorker, born and raised. My (separated) parents each had respective vehicles, my father an '03 Honda Pilot and my mother, if you can believe it, a Scion xB and then ANOTHER Scion xB (at least it's Toyota, haha), until last year when she switched over to Subaru. The Pilot also had its transmission fail after 17 yrs. They took care of their cars as much as they could without a garage or place to store them for the winter. Frequent oil changes and service, but there's no telling what the weather in this part of the country can put a car through. I've been driving these for about 6 years now, and the time came to purchase one for myself. I've been doing my research, using this forum, youtube, family and friends, anyone I know with a car, my Lexus/Toyota zealot uncle, etc. I don't have a garage or a place to really "work" on my car. Still trying to find a trustworthy business, as it tends to be hit or miss over here. 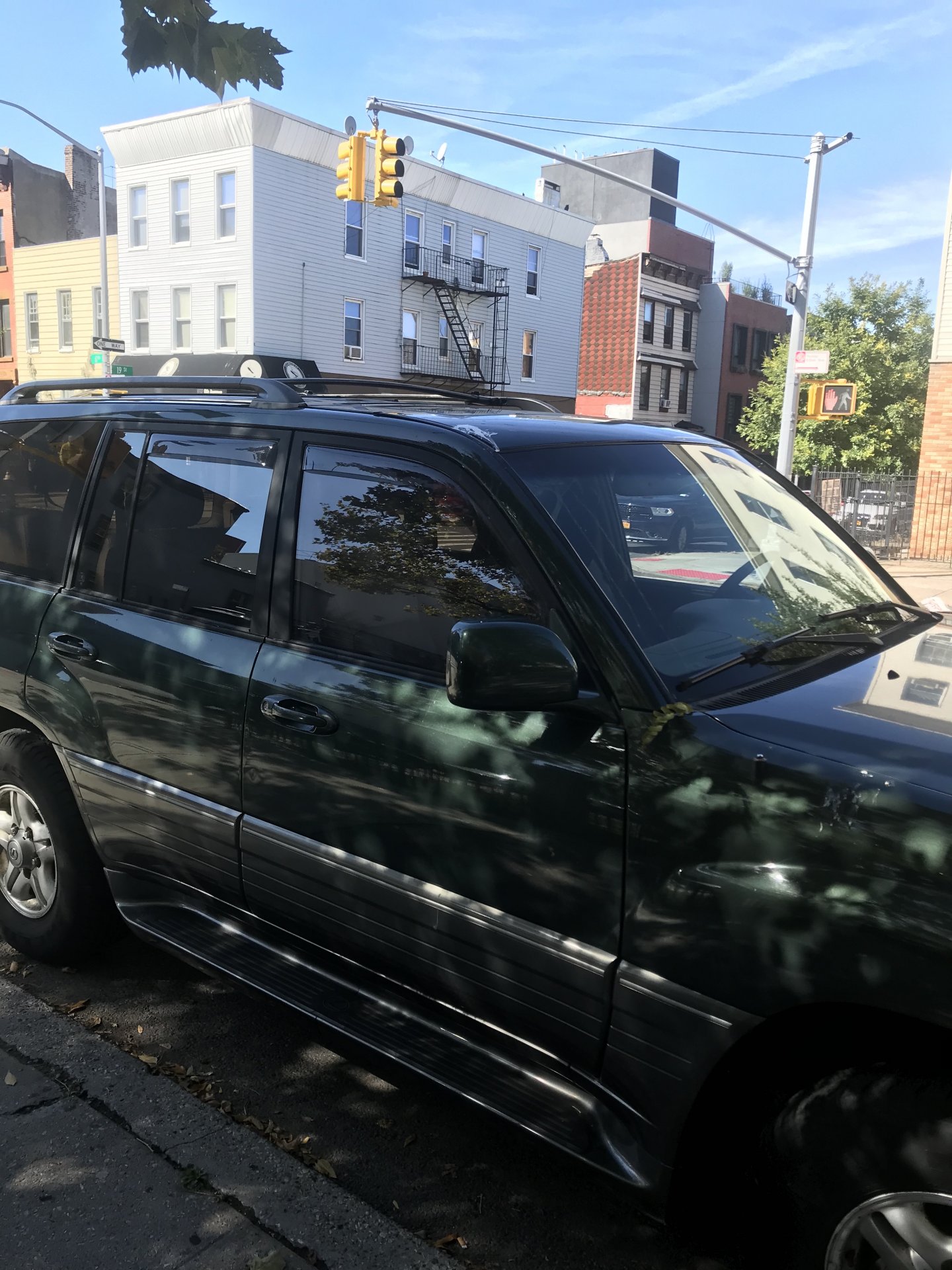 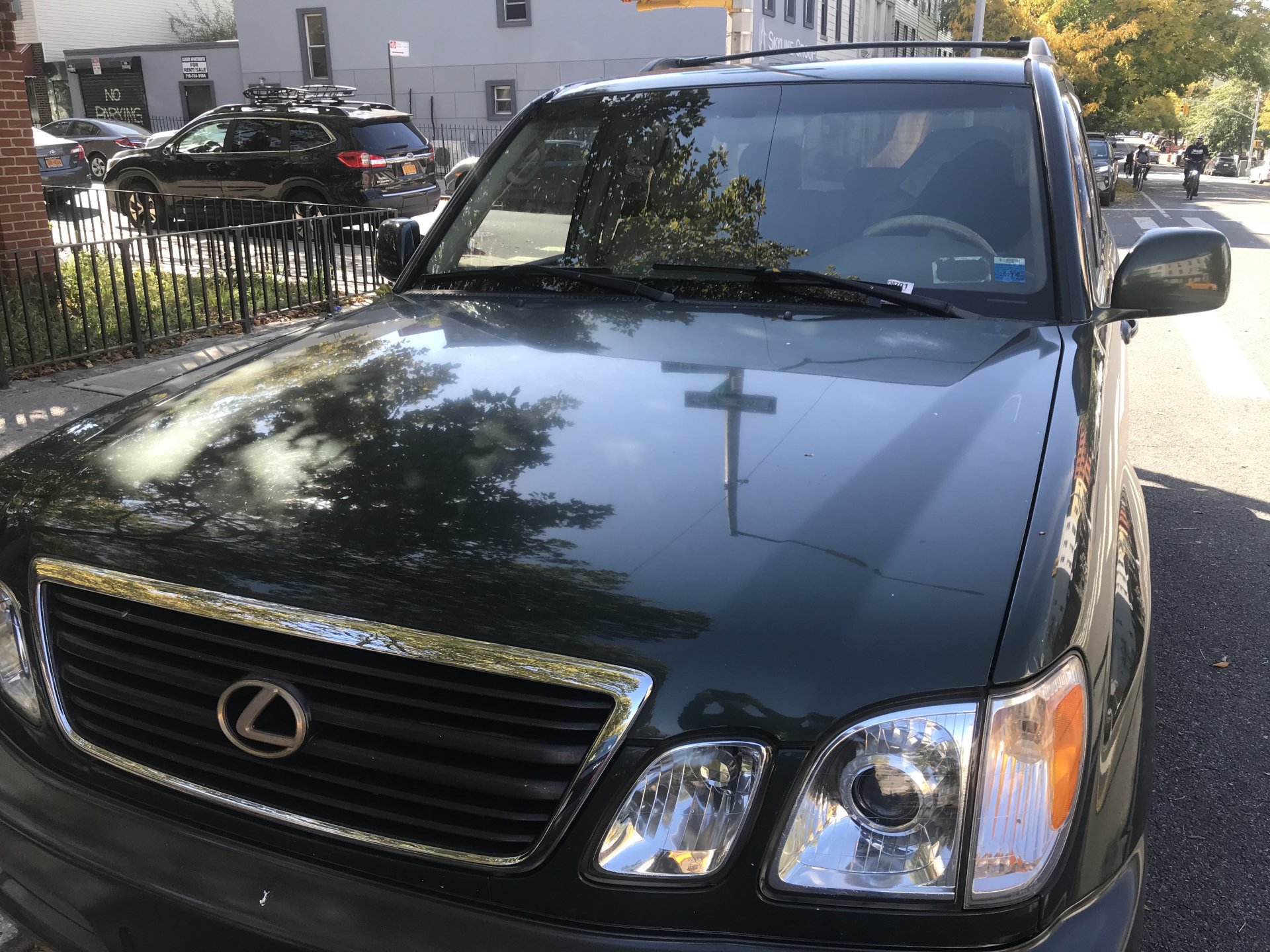 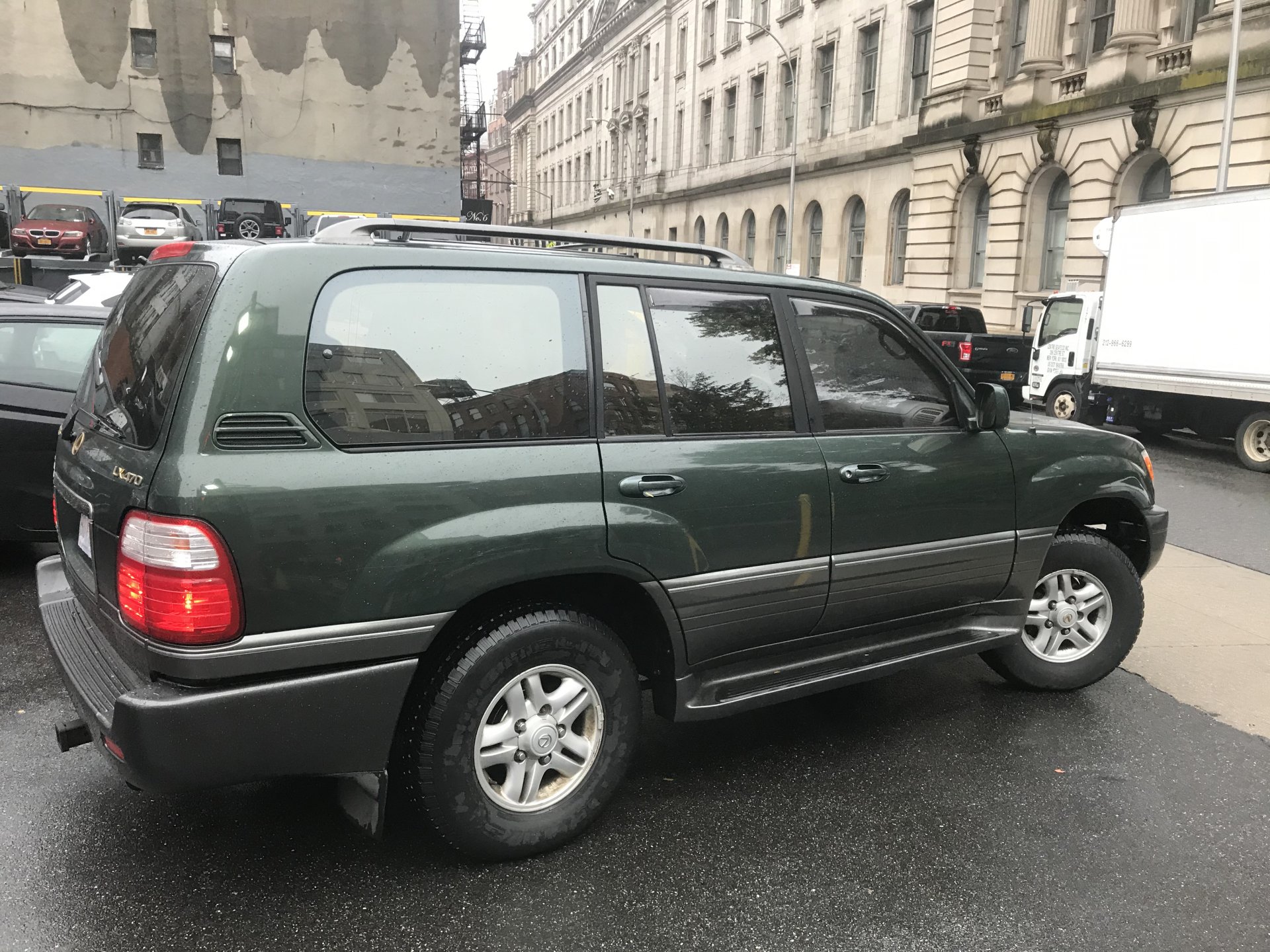 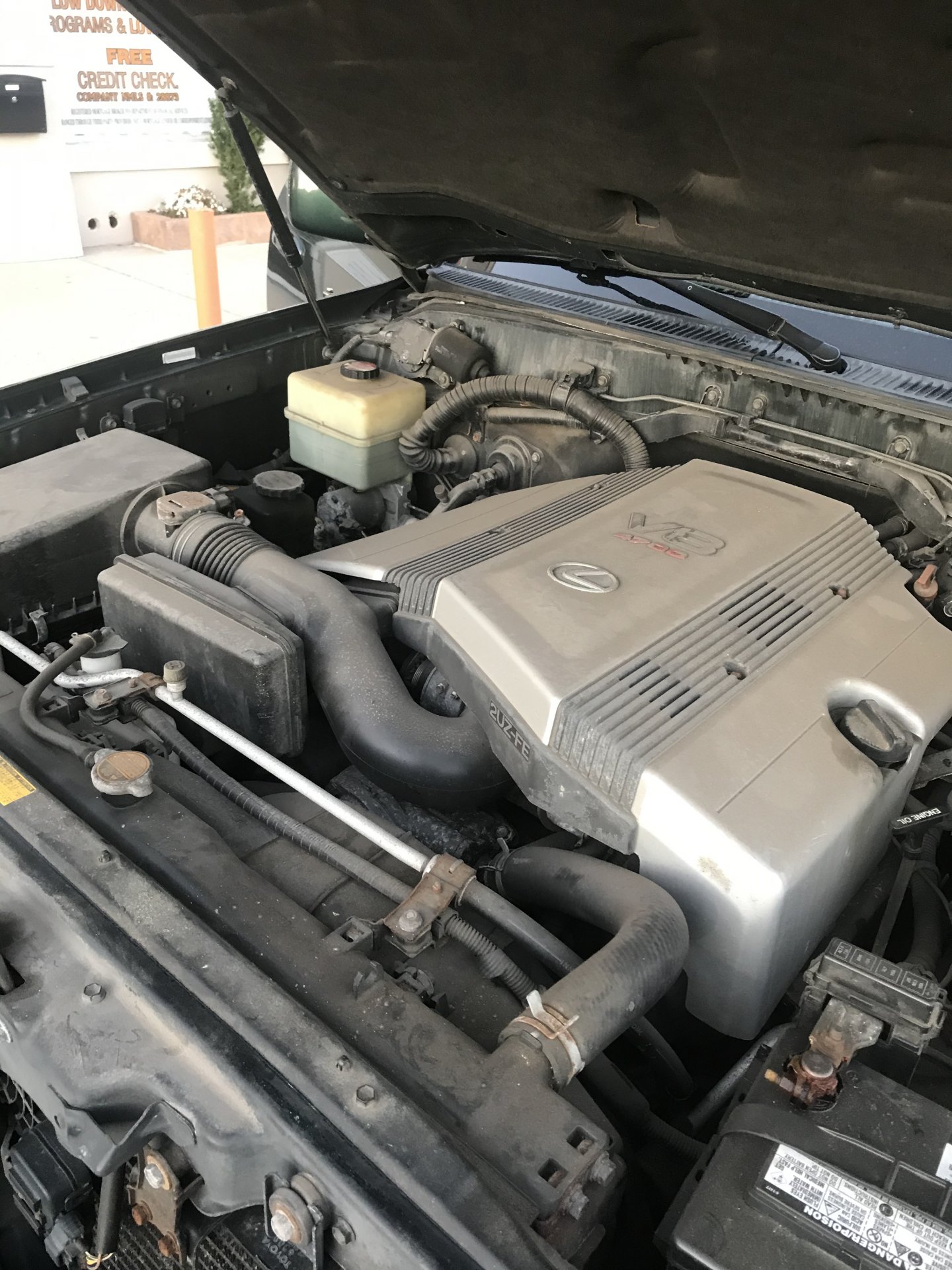 Congratulations. Welcome aboard. You are probably new to this website so there are some basic things that you need to know.

There are plenty of postings that make suggestions on maintenance items to look for. I would do that before asking open ended questions about your rig.

Also I would recommend to find a Land Cruiser specialist mechanic in your area and pay them $150-$200 to go through the rig for you since there are so many little items that general mechanics don’t know about at a dealership or charge you big time for.

There’s so much information on this message board you won’t have a hard time finding the recommendations.

Welcome aboard, sounds like you found a decent deal.
A lot of your questions can be answered by using the search function.

Congratulations. My second son just received the same model for his first ride. You're doing well. Love your assessment of NY roads. I'd plan on the replacing the timing belt (if you can't verify its replacement date), but I would take issue with your mechanic's assessment of the suspension, "just due to its age"; he doesn't sound like he knows much about Land Cruisers.

BTW, the AHC is nice (I love it) and is nearly bulletproof.

Drive it and enjoy.
You must log in or register to reply here.

T
When is high mileage, HIGH mileage, is too high? For a first time buy....

R
Help.. I killed my engine after pressure wash
2 3