I just can't seem to keep from just staying a mite confused!

I have read all I can find (and what's a boatload of stuff) about fans for supercharged (S/C'd) 80s. Concerns about cooling and clearance dominate the discussion. Concerns about fans getting into the radiator core are also widespread.

I selected the "3.0 Dan-Fan" based on the excellent research done by CDan some time ago. Also suggested was trimming the bottom of the shroud to give just a bit more clearance for the fan blades... if I'm measuring correctly, the arc of the spinning fan blades actually drops under the bottom of the radiator core (therefore, the need for 'trimming' the shroud).

Now, here's where I get perplexed: The lower flange (where the bottom tank joins the core) of the radiator (early or late radiator doesn't matter... 'tis all the same), sits proud of the core by a half-inch or so. This leaves only a similar half-inch of clearance between the "Dan-Fan" and the radiator lower flange.

So, wouldn't any fan flex (or whatever disaster could happen) cause the fan blades to strike the lower flange well before they would hit the core? If this is the case, it would seem to make sense that any radiator core damage from "blade strike" would be more like colleteral damage from the carnage - and flying sharp bits) caused by the blades hitting the lower flange.

Does any of this make sense? 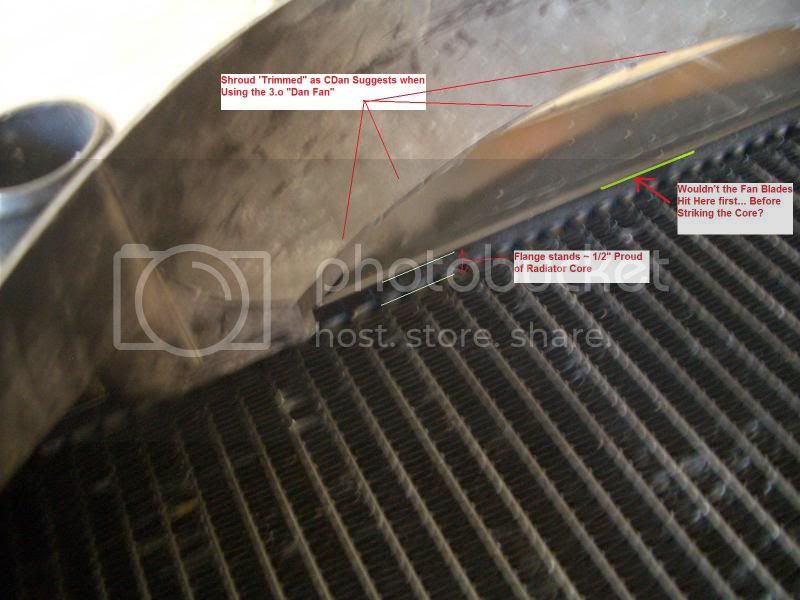 Agree, the 3FE fan shows great promise. The one Inkpot's rig works very well, spacing looks great and it's the first S/C rig that I have played with that actually moves a respectable amount of air.

I have "Dan's Fan" in my S/C 80, installed after trimming the shroud as was recommended. Been running it for about 6 years with no issues.

smokethedog said:
I have "Dan's Fan" in my S/C 80, installed after trimming the shroud as was recommended. Been running it for about 6 years with no issues.
Click to expand...

Tools R Us said:
Agree, the 3FE fan shows great promise. The one Inkpot's rig works very well, spacing looks great and it's the first S/C rig that I have played with that actually moves a respectable amount of air.
Click to expand...

I am contemplating getting Dan's fan, but I am still using the fan that came with my SC. I just bought it a few months ago and while the temps have increased slightly, I am still running 186-194s around town. On the freeway, usually sits around 188-190 depending on the speed. Do the new(er) SC have a different fan or is my cooling system just working well?

Howdy! I understand the question, but I don't have an answer as I have never used, or seen, a Dan Fan setup. When I bought my rig, it had the TRD ring fan on it. I switched out to the 3FE fan as it is larger diameter and sits closer to the engine than the ring fan. I have also changed my original stock clutch to a new blue one with 24000 CST oil. Thanks to Tools, my original (eaton) now has about 15000 CST in it, so I will be replacing it back on in the near future to see if that combo will be better than what I have now. I will post up results when I get that done in the next few weeks. I can report that the 3FE fan with the S/C fan spacer still on top of the water pump pulley, does move more air than the original setup. I can also report that it fits well in the shroud and requires no trimming. And, I can report that I was having a little too much fun playing in traffic the other night, and I had it way past 5000 rpm before I remembered that I had it locked down in first gear. Didn't exactly chirp the tires when I popped it up into second gear, but it didn't have any fan blade to radiator core contact due to blade flex. Didn't really mean to do that, but I think it is safe up to 5500 rpm. John
Last edited: Aug 14, 2010
You must log in or register to reply here.