We missed you and Wendy at CM. It was weird not having both of you there. But we got over it and had a great time anyway!

Thanks for sharing the link to the other Moab pics. I'm sure we will get some up here soon. Mine are still in the camera and I'm trying to re-adjust to the real world and get caught up on stuff.

I think it's safe to say that everyone had a great time. Wednesday was VERY windy driving up, but we made it OK. I followed Jon in his 4Runner and Mike was about an hour behind in his 80, but that gave the two of them a chance to try ham radio experiments for most of the trip up there. They talked via simplex and through most of the repeaters along the way - I'm sure you'll hear more details from them.

David Lawrence was also there with George from Los Alamos. We saw them for dinners and socializing, but I didn't run any trails with them. I also spotted at least one picture of David's 40 in the other picture link.

Thursday was a cold, windy day for wheeling, but I still had fun on Behind the Rocks. There were eleven trucks signed up, but only five showed up! There were two 40s, two 80s, and a mini-truck with a tube bed. I became the tail gunner on the trip and got a CM staff t-shirt to prove it. It's a challenging but fun trail. I forget where Mike and Jon were that day.

Friday was a much warmer day - started out cool, but warmed up nicely, without nearly as much wind. That was Moab Rim day for me. Another fun trail, but a little too much "off camber along the cliff edge" for me. But the scenery was fantastic. A much bigger group - 14 rigs total. We had 40's, a 4Runner, several 80s, and FJ Cruisers. I think Mike and Jon were on Steel Bender.

Saturday was a beautiful day on Metal Masher. Jon and Ann were in his 4Runner, and Vince rode with me (he had showed up Friday evening). Unfortunately, Mike missed wheeling on Saturday because of an eye irritation (contact lens issues). Metal Masher was a blast. We had about 8 trucks - a couple 40s, my 80, an LX 450, Jon's 4Runner, and a 60 series. After Behind the Rocks and Moab Rim, Metal Masher was a nice relaxing trail. We came across a J**p in the middle of the trail with a broken pitman arm, but luckily he had a mobile welder (driving a J**p, he probably needed one), so they were in the process of repairs. We were able to squeeze by and go along on our way. Our leader that day was Treeroot (Mike), who designed the logo for the back of the CM08 t-shirt. It's an FJ-25 with a reflection of an FJ Cruiser in the windshield. The theme was celebrating 50 years of the Land Cruiser - pretty cool shirt.

Dan and Sarah were there in both Cruisers - his and hers. She's got the Maul Cruiser now - it shows up in a few of the pictures in the other thread you referred to above. Also, we had a visit from Ali, Onur, and some of their friends from Chicago and elsewhere. They went on a cross-country tour including Canyon de Chelly and some Utah scenery. They ran Golden Spike on Friday to avoid the crowds (CM doesn't run it on Friday - too long a trail for dinner/raffle day) - all except for Onur, who was having some mechanical issues.

That's probably enough text for now. I know you really want some pictures! We'll see some soon, I'm sure.

Another fun Cruise Moab - I can't wait to get back!

Thanks for the update Evan - I was thinking about Moab the whole time you guys were gone. I almost blasted up there in the Corolla Thursday night hoping to find someone to ride shotgun with Friday and Saturday... Looks like you guys had a lot of fun. I'm looking forward to Columbus Day up there later this year. Maybe we can get some pics together and show them on the 17th at your place! Now that we have a location to upload them, maybe somebody could put them all together into a slideshow and we could link to that one file...

I took some pictures on Metal Masher but I still need to down load from camera.

It was fun as always with great weather to boot.

I've got tons of pics but not from Moab unfortunately. We did only one trail, Golden Spike so that's not very interesting. But, the pics from Canyon de Chelly and Bulter Wash ruins are worth looking through.
~Ali~

A few pics from Cliffhanger on Friday.

This was the last item on my camera before it broke. The driver was John Elliot (sp?) on Steel Bender Thursday. He was taking an alternate line down. Romer was spotting. Video is 12mb.

how did your camera break?

I tested my camera against the weight of an 80 series and the camera failed
http://forum.ih8mud.com/mud-bay-miscellaneous-items/430900-niner-air-9-complete.html#post6047351No Cruisers, just bikes

Google Earth tracks up at:
http://bushrat.hdcruisers.org/cruisemoab08.kml

Ok I am not the most computer savvy individual, but I cannot open in GE. Am I the only one?

i am the smartest dummy ever!

Ok now that i figured it out, I am sure I am the only one who had trouble

I couldn't quite decide if I wanted to resurrect a past thread on the subject, or just add here. As we know, Rising Sun required a CB for this event. HAM was optional, but encouraged.

I thought I would relay my experience with radio communications at CM. It started on Wednesday when Evan and I were working our way to Moab. Mike was about an hour behind us, and using several repeaters I was able to communicate with Mike off and on depending on terrain and distance. There was a repeater about half way between Shiprock and Gallup that worked very well. This was a previously unknown repeater to both of us, and Mike was given the frequency while talking to another fella. This gave us communication until Evan and I arrived in Cortez. This repeater was not in my repeater book.

The repeater in Cortez was not very good. Nuff said. We talked for awhile on simplex.

The repeater in Monticello worked great. Mike was 24 road miles south of us, and we both were in rolling country. We did pretty well, especially when one of us was on a crest and not in a valley.

During CM I had HAMs on the runs the first two days. The last day I was the only HAM in the group.

First day was Steel Bender and I recall Mike, Romer and myself were on HAM. I don't recall using the HAM much. My radio was set for dual-watch, meaning I was set to the trail frequency and scanning the repeater in Moab. I had no traffic on the Moab repeater.

Day two was Cliffhanger. Again I was on dual-watch, but this time I was on the trail frequency and scanning the CM base 146.460mz. I talked with Ash at one point while he was on Golden Spike. I can't remember, but I also might have talked with Mike. At the end of the day we had a vehicle break down and we had to tow the truck out. This made us real late for dinner. Both Bill Morgan (Red Chili) and I tried to get out with the 2m. We were not successful until we hit the main road. We were able to talk to CM base simplex once we climbed out of the canyon.
1969 FJ40L aka TOROTE: 3FE stroker (aka 2FE), H55F, SOA/SR, 35" MT/R, 3:1TC, 4WDB. Suffering from pre-sellers remorse.
1985 4Runner RN60LV aka BUSHRAT: lifted, locked, 32" training wheels, R151F with dual 23-spline TCs. Future RZN60LV.
2012 Venza LE AWD AGV15L, 1AR-FE. With bike rack. My old-man car.
I've seen many people go to the desert. They never come back the same. It's best to just stay away ... and leave more room for me.

bonfire said:
Ok now that i figured it out, I am sure I am the only one who had trouble

A couple of Evan in Mirror Gulch. 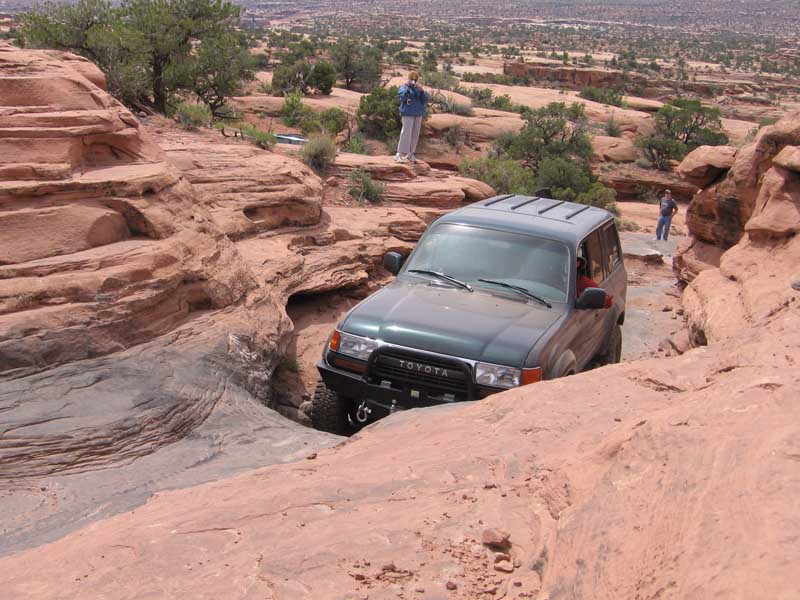 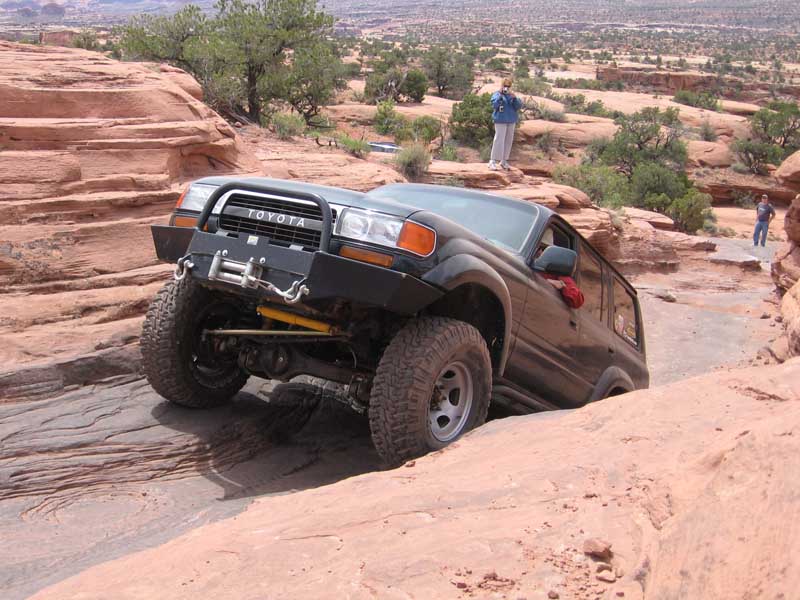 Location
back in the land of enchantment

I think I took nearly 40 this year. Up from 9 last year. I'm waiting for pics of me on the Rim, then I'll send some to one of you starry guys to post up.
David

. I guess I will have to retake them on the October trip.

Can someone tell me the secret to climbing Body Snatcher obstacle in the Golden spike trail? I don't recall it being this tough few years back. What gives?
~Ali~

alia176 said:
Can someone tell me the secret to climbing Body Snatcher obstacle in the Golden spike trail? I don't recall it being this tough few years back. What gives?
Click to expand...