By mistake I bought some of Mobil's extented life oil. So it's been in the truck for 13,000 miles now. I've added 3 more quarts since I put it in and left the filter there during the whole time.

I just ordered a kit from blackstone. About how long before I get this kit. With next weeks schedule I'll probably knock off 1 of the remaining 2 thousand miles I have left before the oil change.

I'm planning of posting the results and if anyone wants to disect my filter let me know.

Bet your oil will show just fine. I'd consider extending out that far myself with one change - fresh oil filter halfway. Generally, a bit over a week for the first kit to arrive. If you get impatient, they suggest getting your hands on the smallest water bottles you can find (they're about 2" diameter, hold like a pint?) and print the sample data sheet off their website. These little bottles are tough enough to get through the mail, and the sheet ensures you give them the info they need. A half bottle full will suffice for the sample.

you are going the full 15K? nerves of steel. dont think I gould go that long without a bypass filter, will be interestign to see, at that milage please get a TBN, only $10 more.


I have a filter cutter, if you want send it my way and I will open it up.

I haven't really been paying attention to the Mobil 1 posts because I can't bring myself to spend the money on the oil.

I've been changing my oil (Valvoline dino Maxlife) every 3 or 4,000 miles. How often would you change your oil if you used a plain ol' (decent quality) dino oil?

I would not go past 5k with guality dino, 3k with cheap stuff. there is some debate as to witch of those two catagorys Valvoline products are in.

My short reads in bobistheoilguy.com lead me to believe that the plain ol' Valvoline is bottom of the barrel cheap stuff, while the Maxlife is a high quality dino with good properties. I've been happy with the consumption, pressure, and appearance of the oil so far.

Sorry for the thread hijack.

Got my analysis back today. Seems I have 0 antifreeze in my coolant. And the oil is about in the same shape as some having only 4700 miles on it.

When I get home and have access to acrobat I'll try and post up the whole report. Basically this extended life stuff works! And at 45k a year will save me some cash.

Becasue of the on set of cold weather I had to change it out early at 14,800 miles.

I have been using synthetic oil for years and I only change it once a year and the filter at 6 mounts.My jeep has 260,000 and still going strong.

Location
on the right coast

I used this 10W30 Mobil Extended oil in my 4skinner and did not go fast 7000 miles due to the oil is getting black and thick. I installed OEM air filter but the looks dirty after 7000 miles so I decided to drain and fill with fresh M1.

I have run M1 and K&N oil filters in my wife's '99 Dodge Grand Caravan since 6,000 miles (we are the original owners) and I couldn't bring myself to let it ride to much past 3k to change it even though it is supposed to be good to 5k. I did switch to the Extended Life M1 last oil change and I was going to change it at 7.5K but with your findings, I may let it go till 10K. (75,000 total miles).

Here is a scan of my report. It says something about the VIS being a little high. Can someone explain this. 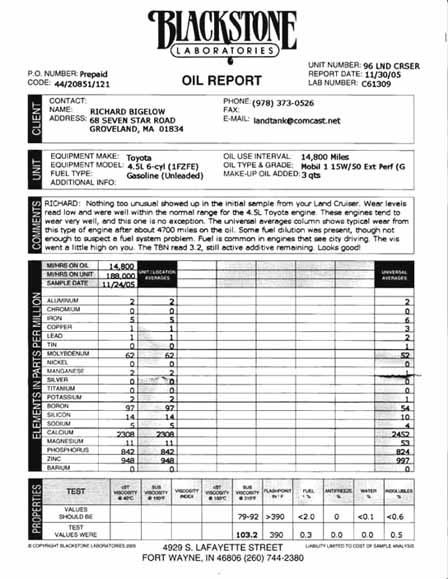 Viscosity, I assume. Thickening with age??

Viscosity = resistance to flow. The higher the number, the thicker, the slower it flows...
Your 15W50, pretty thick in the first place, seems to be slightly above the high end.

Did you use to quiet noises? Reduce blowby or burning?

As we all know, the mfr expects something along the lines of 5W30 to be used...

I would imagine bobistheoilguy.com could splain better...

WOW, neat report, those wear metal #'s would look great @ 5K miles but this is 14.8K a long haul and still great, I don’t know why blackstone squawked the fuel, 0.3% is next to nothing looks in line with my 5K reports.

Even though I am in the "thick camp" I would normally say 50 wt is to thick for the north east except for summer, even M1 50 wt witch is thinner than others, but apparently the 4.5L is just fine with it and even seams to like it all the way into early winter. Makes the EPA mandated “5w-30 recommended” look like BS,,,,, Again,

IIRC you do a lot of extended trips? That may explain it, thin oil is handy during warm up in cold weather, if you spend a lot of time at temperature with fewer warm ups then the thick stuff has its place.

Looking that the viscosity did not drop over time shows that this oil is shear stable, good to know

Could I talk you into posting this over at BITOG in the UOA section?

Would like to see what someone besides this arm chair oil geek have to saw about the viscosity increase.
Last edited: Dec 4, 2005

Oh BTW Rick if you are going to run oil this long you should put some consideration into a bypass oil filter, I have a “Oil Guard” that takes retail elements, you leave them in for as long as the oil or longer (have not got around to installing yet) you can also get housings that use toilet paper as the element, making them cheap, usually those are changed ever few K miles.

Stay away from the Amsoil dual remote, the Amsoil standalone bypass is OK

maybe I missed it, how long(months wise) was it in the engine. 15k is about 1 year for me, wonder how that would affect the M1 EP

It was in for maybe 4.5 months. I bought the stuff by mistake in one of my PepBoy coupon raids. Because the Aus market specs 15w 50 for summer I thought that I'd try it. I did leave it in a little long as the last day it got down to about 20* and the engine knocked like crazy when it started up. I changed the oil that day.

RT, I still have that oil filter that was on for the whole 14,800 miles if you want to tear into it and see if a bypass is really needed.
C

Great report. Once again it shows that the 80 motor is easy on oil and can comfortably tolorate 10K+ changes with a good synth. I don't see any need for a bypass filter here.

Raventai. I am wondering if we are seeing oxidative thickning occuring even though the additive package is not fully depleted. Would be a good question for Molekule and those guys on BITOG.

Landtank, not to hijack but... I remember you having the injectors cleaned.
How has the gas mileage been?

If you dont have a bypass oil filter in your loop you MUST change the standard oil filter every 3000 miles. The oil can go much longer, but the filter will clog and go into bypass mode and your engine wont be getting any filtration!!!

I dont know when that would happen, but eventually it will.
You must log in or register to reply here.

oil pan arch seal inspection (am i in the right quadrant)?