LSVP is frozen to it's mount... need ideas for getting it off it's bracket. (SOLVED) (1 Viewer)

I am changing my LSVP, or attempting to. The current one is leaking and while not catastrophic, its annoying.
New LSVP is in hand.
Attempted to remove the leaking unit and it's stuck to the mount (or the mount bolts via rust).
I have backed up the bracket mount with a tire iron prying against a frame member while whacking the studs with a 2# brass hammer. Stud threads protected with their nuts run on flush to ends; and no joy, the bolts don't move.
Using a 2ft pry bar I have tried prying it off, down, side ways, up (its fully up it its stock setting) and this thing will not move. The little mushroom cap at the top that rides in the groove disintegrated, but that's it.

Its been hosed down in PB Blaster for a week anticipating this bit of maintenance. I hosed it down good before giving up for the night.

In desperation, I'm thinking of using the guts out of the new one to rebuild it. But that's a $150 oops if it goes poorly.

Can't you unfold the bracket from the frame and then mess with it on the bench? I can't remember how I did mine but I remember it was stubborn. Maybe just buy a new bracket.

FMS says to pull the whole bloody mess and work on it at the bench.
What they don't tell you is the top two screws are guarded by the fuel tank, and while not impossible to remove, they might just as well be.
I figured, incorrectly, that it would be a easy based on peeps cautioning that its easy to loosen up and reposition it for lifts.
Grrr

In your situation I’ve used a sawzall with a fine tooth blade to cut the mushroom ends off the U bolt by holding the blade against the side of the bracket.

another thing I've done is to cut the front bend in the bracket so I can remove the rear section and deal with removing the LSPV on the bench. Then just weld the bracket back together once reinstalled.

sawzall, cut the bracket off and get a new one or make one from some sheet metal

That's a viable option. I'll order a new U bolt, nuts and washers too. Might as well.

I have found Aerokroil to work well. I was able to heat a wrench (I think 10mm) with a torch and bend it so I could access the top two bolts near the fuel tank. I was not fond of the wrench.

Cutting the bracket doesn't bother me much. I can weld it back together.
Is there a threaded cap I can screw down over the flare fitting to keep from hemoraging all my brake fluid while fighting the LSVP off vehical?

Looks like a two piece solution. Need a union and a plug.

Sawz-All to the rescue.
Disconnected and plugged the two input lines to keep them safe, took off the sway-bar bracket to get it out of the way and knocked the back of the bolts off with a sawz-all. Loosened, but left the upper line attached to catch it. 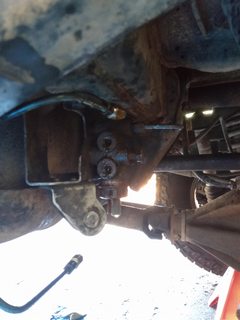 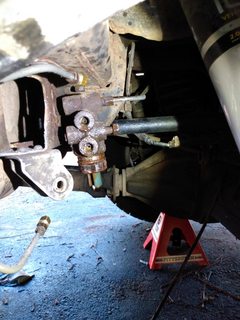 New one is on, master cylinder changed (it was leaking too), lines bled, ABS exercised; and I've got a happy truck again.

I smothered the new bolts in Never-seez before putting it on. Just like Frank's, "Put that $h!t on everything!".
Maybe this one will come off when it dies in 20 years. LOL
You must log in or register to reply here.

Where does the PHH pipe mount to the engine?

Don't you hate it when your intake leaks oil? I know I do. *SOLVED*

Alas, I think it is time to sell my 80. Looking for a bit of advice.