Long time forum searching and on my third fj80/lx450, everyone has been it's own puzzle. The 1997 LX450 I purchased recently has been an interesting one to say the least.

I went and replaced both knock sensors and the front knock sensors wiring harness after finding they had done the typical shear off at the plug game. Truck was kicking p0325 and p0330, as well as showing the upstream o2 sensor as showing p0135. Codes for the knock sensors seemed to abate, so I went ahead and replaced the upstream o2 sensor but after checking the resistance on the sensor i had been shipped a faulty sensor (or had wiring issues) as I went and replaced several poorly placed butt splices. After rewiring I did a resistance test from the sensor harness to the computer harness as well as checked both o2 sensors again. Here's what I got:

What I got from this is now in the live data on my obd2 reader, I see outputs from both o2 sensors where I did not before. So that was good. However, I'm now kicking the upstream code and both knock sensor codes.

Here's the thought/question:
Logical next step from what I could decipher is to replace the ect and thermostat as that may be causing an issue (at least from some other posts I read). Does that seem reasonable?
I haven't seen any temp above 174 on the live data stream. I don't know if this is normal.

Check the resistance from the knock sensor harness to the ecu? This could be another phantom wiring problem, which could totally be related to the egr back of the block heat issues I was seeing.

I also realize that it could be the ecu but thus far I've consistently been replacing failed parts but the codes persist.

Few side notes one that could be related but didn't seem as bad as described by others, is the harness by the egr seemed melted a bit but none of the exposed wires seemed damaged. I went ahead and insulated that for now.

The Bimetal Vacuum valve near the rear knock sensor had one of the nipples knocked off so a hose is loose there. Part is on the order but I'm working through the above unless they could be related. (part number 2582013020)
- according to this post, #15 Another Knock Sensor Thread - https://forum.ih8mud.com/threads/another-knock-sensor-thread.880525/ this might actually be my problem.

Heater/defroster system in the vehicle have stopped functioning though again this may be another unrelated problem (likely) or related to temperature controls. I don't know but thought it was worth putting everything out there.
Last edited: Jan 31, 2021

After many more hours searching the forums here and more debugging the solution was found and turned out to be a three (possibly four) pronged problem including: a roasted and toasted wiring harness from the knock sensors, it runs by a spot in the engine bay that gets pretty warm and can over time melt and short out (this was some information I found on the forums), the original knock sensors had there connectors broken (another common problem), the new "oem" sensors were incorrect tripping off the CEL, and possible problem with the vsv valve in the same area was busted so I went ahead and fixed the one that was there (while the replacement is on its way in the mail).

First step was checking the continuity of the new wiring harness that I made and passed through the fire wall, all checked out good measuring (0.9 ohms on a resistance check that had 0.7 ohms before hooking up to harness, so the delta was 0.2 ohms from the knock sensor connector to the ecm). This was highlighted above. 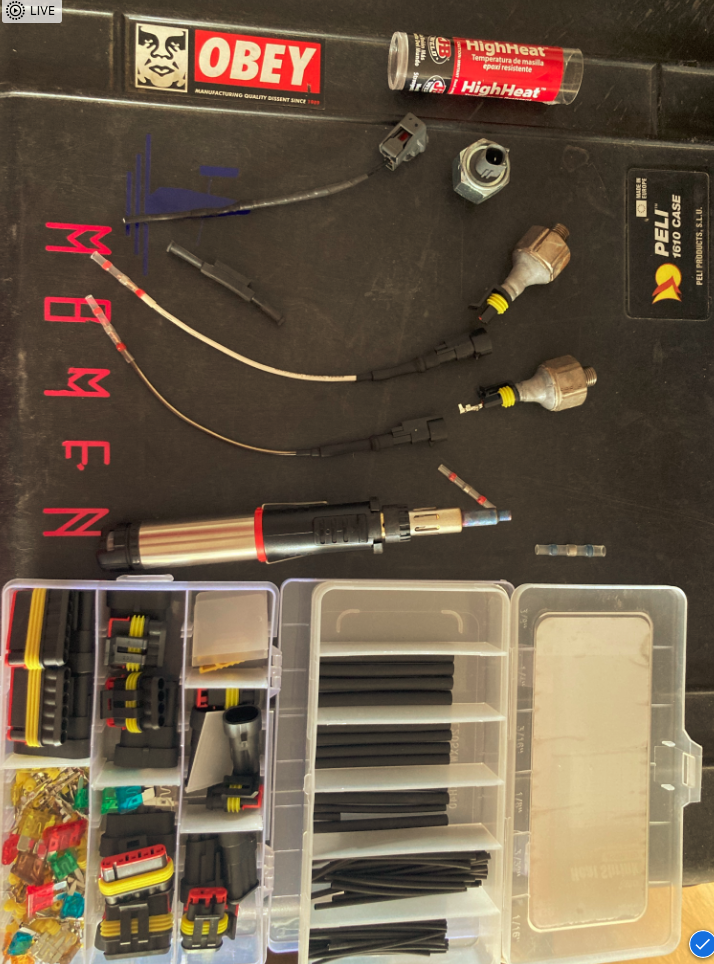 Heres a photo of the knock sensors with the connectors in place, I made sure that they would fit in the 27mm (1 1/6'') socket without interfering too much. 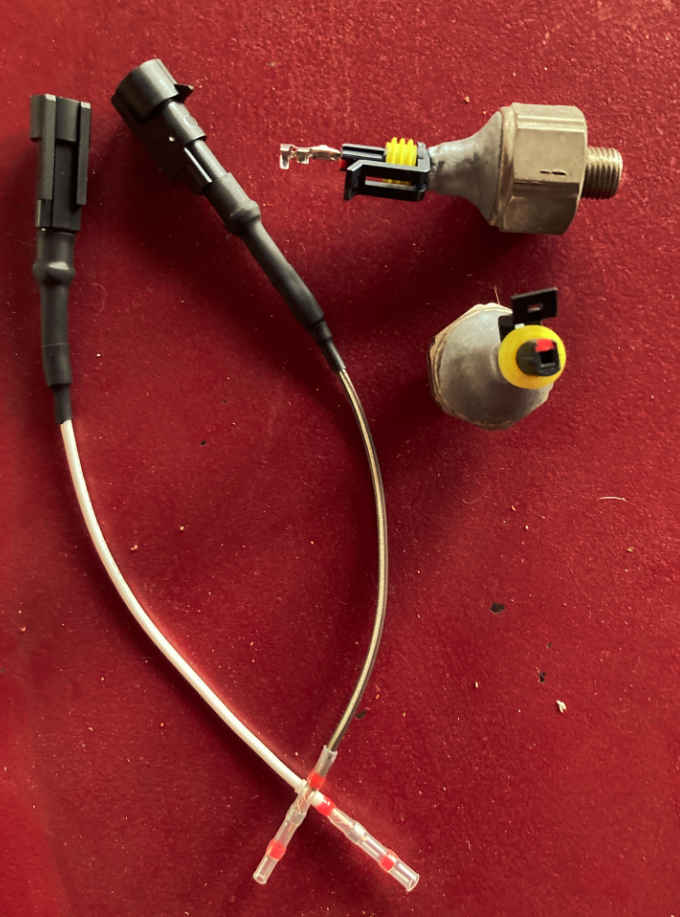 The wiring harness all put together, heat shrink/soldered, and strain relieved. 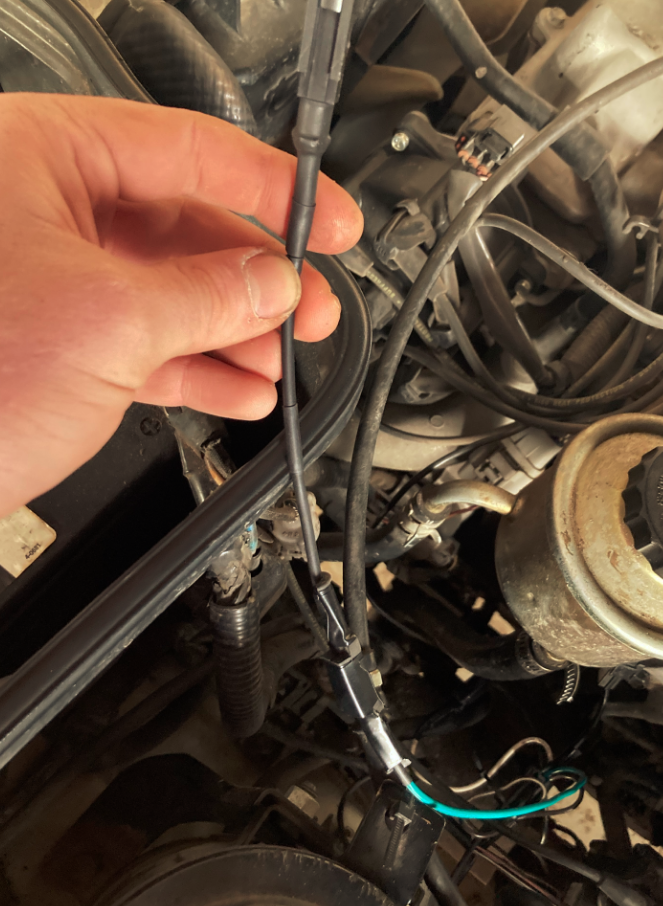 After all that the quick drive out and back seems to have fixed the CEL. There was a doomed spot on my drive out to the highway were every time without fail the CEL would come on (this happened at 50% engine load and around 1900 rpm, which elsewhere on the forums has mentioned is where the knock sensors begin reading).
Last edited: Feb 24, 2021

Some other handy images that I used in debugging (for reference this vehicle is a 1997 LX450.
Checking the VSV (Though this graphic was more helpful in locating the little bugger, as one of the nipples was busted). 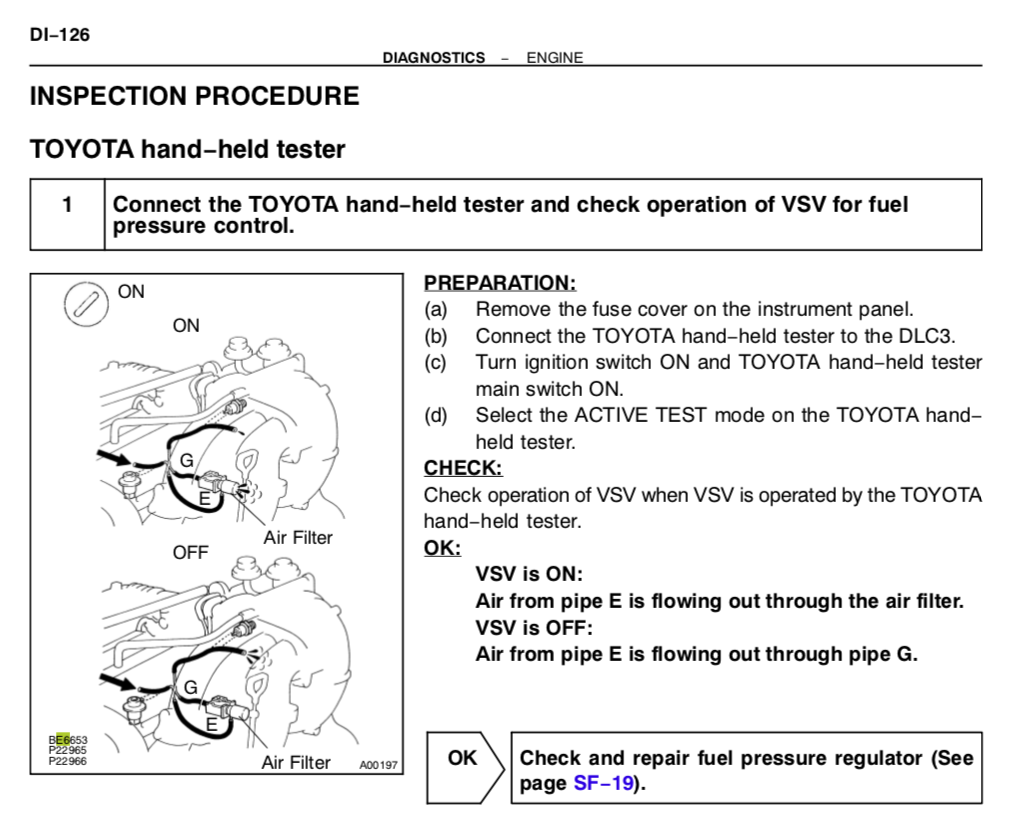 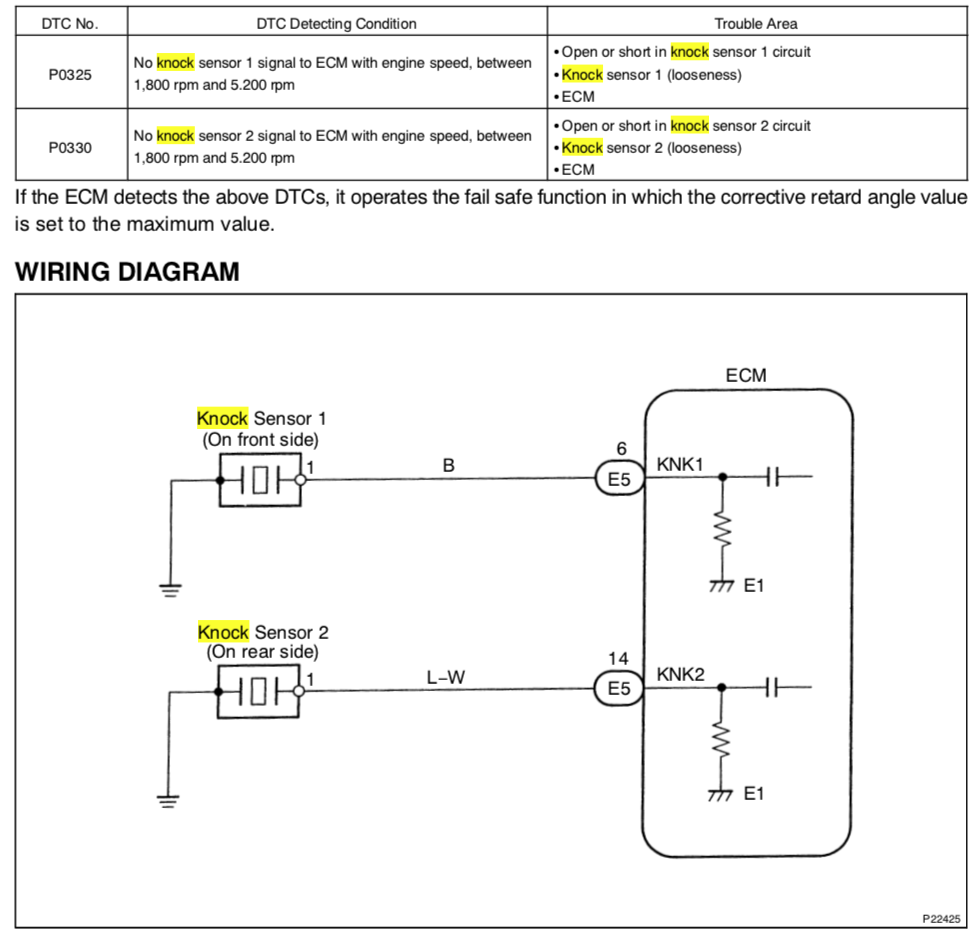 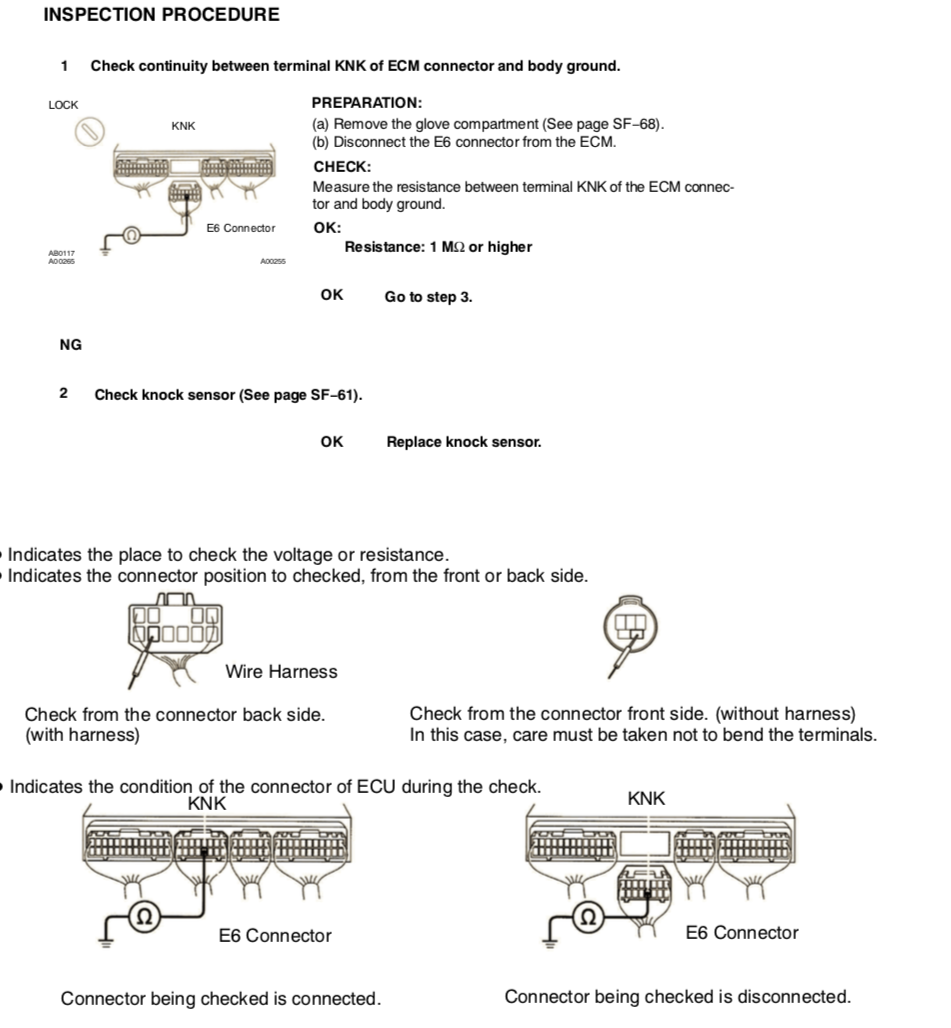 I’m glad you were able to remove your issue. I bet it feels good! I’m envious of your troubleshooting skills; I’m learning as I go and getting edumacated via YouTube.

Waiting on my OEM knock sensors to show up. If I still get a CEL, I'm going to "try" and follow your steps. Thanks for posting this.

FMC80 said:
I’m glad you were able to remove your issue. I bet it feels good! I’m envious of your troubleshooting skills; I’m learning as I go and getting edumacated via YouTube
Click to expand...

I'll say the forums here are top notch, and definitely worth getting the fsm for you 1994. There's some links floating around if you search. Definitely felt good to get the light off while driving. Spent a while debugging. Turns out the p0125 CEL was from the po's wiring, there was a part in the o2 sensor wiring harness that had a bunch of poorly done splices.


jsix321 said:
Waiting on my OEM knock sensors to show up. If I still get a CEL, I'm going to "try" and follow your steps. Thanks for posting this.
Click to expand...

I was glad to have fixed the knock sensors when it was all said and done, there is also a resistance check you can do with the knock sensor to see if it's failed (though I assume most have the broken connector).

These are the connectors. Not a terrible thing to have on hand as well, next time I'm at the junkyard I'm going to grab a few spare toyota connectors just because.

Quick update. P0325 came back on after filling the tank with 85 octane, cold weather, and high altitude were all I could factor in. The low octane fuel being my first suspect. I went ahead and put in 91, no cel in 50 miles so that may be the issue. Not sure if cold weather has anything to do with it, but I've run lower octane fuel in my 1996 with no issues, but did read elsewhere that this could be an issue.

Update. Knock sensor 1 and 2 codes returned, cleared them, then knock sensor code 1 came back on. The higher octane fuel seemed to have an effect for a time, but didn't totally fix the problem. After some more research and look at the live data outputs from the air intake temp I noticed that the readings were not quite accurate given the air temperature outside. I had cleaned the MAF out a while back around when I began debugging the entirety of the knock sensor system errors. When cleaning the MAF I believe there was some dust that got captured in the connector itself which led to faulty readings for air intake temperature. From what I can gather this can lead to a whole load of problems with the system running properly.

To highlight quickly what was done thus far to try to finally remedy the knock sensor codes:
- Spliced new wiring harness after discontinuity/short was found between the knock sensor harness and the ecm. This was caused by melting around the back of the block or the harness having some damage from the egr exhaust melting the harness at the back of the engine bay.
- Repaired the two knock sensors.
- Repaired the harness to the O2 sensors.
- Cleaned the connector to the MAF with the Oreilly Brand Brake Cleaner which is essentially just acetone and a propellant (it's unchlorinated). I also applied dielectric grease to the connector.

Following the cleaning of the MAF sensor I pulled the efi fuse for a minute then took it for a spin. Seems to be better thus far, quick drive with lower octane fuel and the knock sensor did not trip up immediately. I'll keep the updates going until the problem is solved.

I need some input if anyone has it. The CEL kicked on at a different point during the drive today. As I mentioned above, this morning I had a suspicion that the MAF could be reading erroneously, as the temp reading seemed higher than the temperatures I had been experiencing. After cleaning this seemed to be fine as far as the live data readout on my obd2 scanner.

The car had been running fine, drove to the store no light, drove to autozone no light, after about 20 minutes of driving afterwards the CEL came on when I reached around 50mph. I pulled into the gas station, cleared the light, pulled the efi, and as I pulled out it turned on immediately as I revved it. I'm trying to avoid the 113$ for a new oem sensor (last go around I bought aftermarket), but this seems like it could be the next step...

Questions:
Does the operating temperature of the vehicle at the ect do anything as far as regulating fuel input?
- In that, I believe I need to replace the thermostat valve as the engine temp rarely if ever gets above 174F on the live readout.

If I replace one knock sensor, do I need to replace both?

Thanks for any input.

Last one, after some more research I'm going to see about replacing the fuel pump before anything else. The vehicle has 250k on the odometer and it probably wouldn't hurt to swap in a new pump, on top of which I did some research and the newer resonant based knock sensors can hit the frequency for knocking when the engine is starved for fuel. My thought being that the fuel pump could be going out, but I'm kind at a bit of a lose. For where to debug next and am getting to the just throw the cheapest part at it first.
You must log in or register to reply here.