Located in So Cal, looking at a 1996 fj80. 147000 miles, cleanest interior you can imagine. Never been offroaded. it is black with tan interior. Has the brush bar deal on the front and on tail lights. Runs really well, no leaks. taking it to a mechanic tomorrow for a check. What should I have him check on? What are the known problems for that year (if any), at this many miles, what should i be looking for?

I drove it tonight and it seemed to run great (after being in the 60 I felt as if I was in a whole new world-talk about plush. . .) The only thing that I questioned was that there was a little bit of a whirling sound (not grinding, just kind of winding up) when I would first accellerate. Any idea's?

thanks for the help!
tjg

The following should turn up a few threads. I'd throw some suggestions your way, but I'm sure I'd leave something important out. 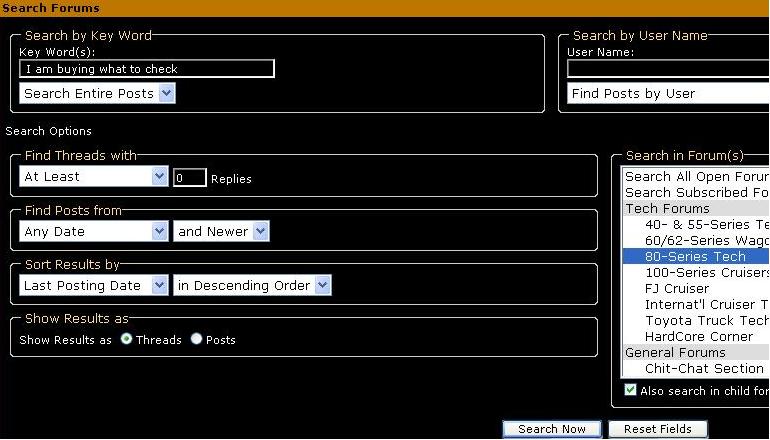 That "whirling" is common on our 80s, it seems (some call it buzzing). Someone here knows what causes it...I'd only be guessing. Maybe it is the fuel pump going into warp drive.

gillti said:
...The only thing that I questioned was that there was a little bit of a whirling sound (not grinding, just kind of winding up) when I would first accellerate. Any idea's?

do you hear the sound even when in Park or Neutral? If so, it could be non-OEM belts. Toothed belts make a whirling/turbine sound when the engine is revved.

only heard it when accelerating. Didn't sound too bad, I might have been hyper-sensitive because I was checking it out for purchase.
tjg

I doubt you'll find much wrong with that rig. Can you get service records or receipts for work done? Maybe the maintenance info is stamped in the owner's manual -- I know mine was stampe with 15k, 30k, etc. info. -- which was nice to have.

Did you find enough threads to give you a list of things to check?

If this 80 has been taken to a legit shop, the VIN # should be trackable on CarFax. Plus, just in case you should be able to find out if it's ever been wrecked.

I ran the carfax on mine when I bought it 5 years ago or so just to make sure. I lucked out and bought a 80 that had been maintained at the Toyota dealership consistently, all shop visits were on the carfax report. That I know of. Besides, I bought my 80 at the Toyota place.

I will say buying a newer Cruiser is less expensive at Carmax than at a Toyota dealership, I've noticed around a $7,000.00 difference between Toyota and Carmax on comprable 100 series. Plus the Cruisers at Carmax for the same model years also typically had 20-30K less miles on them than those at Toyota which were several thousand dollars more.

I've bought one 4x4 Tacoma from a small used dealership several years ago and will not be going that route again.

The whinning or buzzing sound you're hearing is typical in an 80. Mine has always done it while accelerating. It does sound like the Cruiser is trying to jump into "light speed".

If anything I'd be sure to crawl around underneath, look for rust, oil leaks and a knuckle gasket rebuild. Also check the parking brake out, folks have a bad tendency of driving with them engaged. You may also want to buy a OBD scanner and check if any codes are there that might have been turned off, when these codes are erased it can take 90 miles or so before they reappear. Be prepared to probably have to replace the EGR VSV.
You must log in or register to reply here.

R
looking for inputs on tires
2 3