Some may consider this post a bit of heresy.

I have an 04 LC100 that is in great shape. There are times it feels a bit too big. Fuel economy is not great, but I love the vehicle. It has been a third car and has seen about 5K miles in the past year. It looks like it might become a daily driver. While I love the vehicle, I'm not sure it's practical as a daily driver for me and my briefcase and a few hand tools.

For those of you who have already moved from LC100 to the 4Runner, what have been your observations.

I'm considering a Trail or Limited. I do have a trailer that we take from Phoenix to Flagstaff several times per year. It weighs 3,000# loaded. The climb is from 1000 above sea level to 7,300 feet above sea level.

I'm curious of this inquiry as well.

I use a 2010 Trail Edition as a daily driver (although I'm not from a LC background) but I hear what you're saying about weight, size, and MPG's. I have about 118K, and when not towing I get around 18mpg (with stock tires, Revo II's LT's) and towing my smaller trailer (about 2500#) I get 14-15 mpg. I tow around the NE, which has it's share of hills, but don't really consider it power starved. I couldn't speak about towing at 7300 ft.

It's extremely capable and surefooted, and although I have modded it a bit (full length roof rack, ARB front bumper and winch, dual batteries, airbags, 3" light and UCA's, drawer system) I'm still extremely happy with the truck, and still love getting in it everyday. 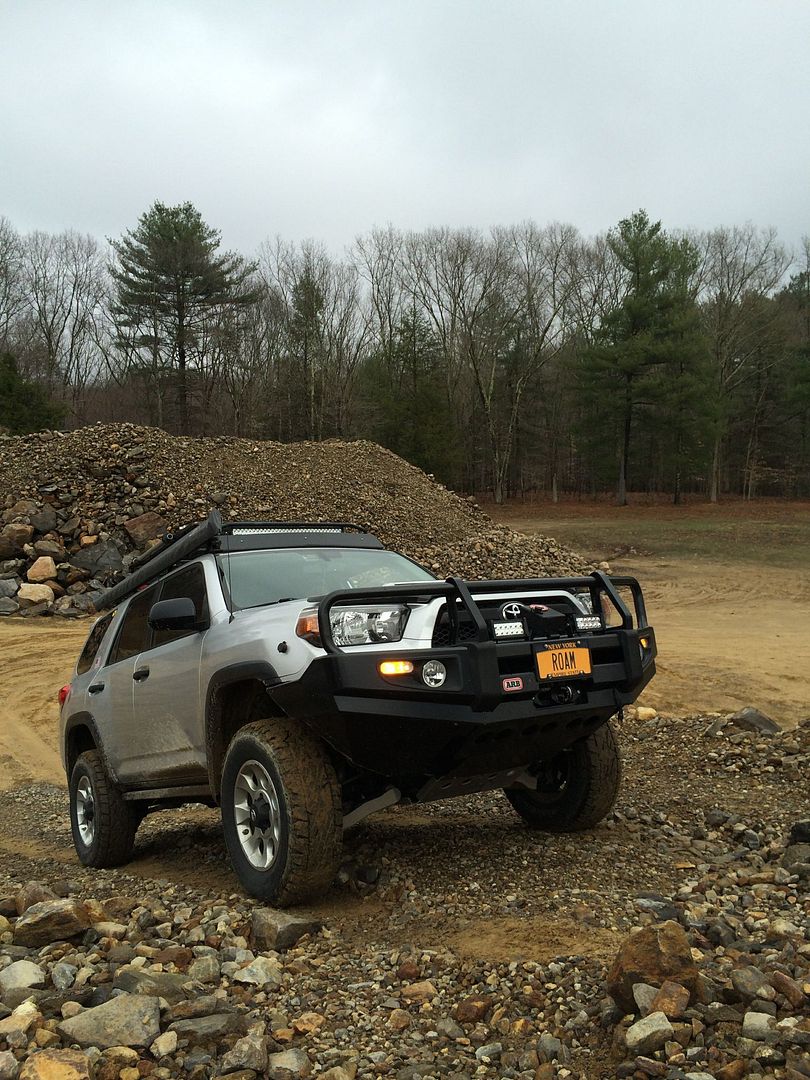 Probably the most notable migration of this kind would be Paul May.

Hopefully I'm not reviving too old of a thread, but I just got myself a 2013 4Runner Trail and thought I'd chime in. I've been driving a 100-series (LX470) for the past few years and I got the 4Runner to replace it. I havent sold the 100 yet, but that's in the works. I should start by aknowledging that both have been impressive vehicles and its a bummer that I cant keep both.

I've been very happy so far with the transition, but it has not been without a drawback or two. I really enjoy the newer amenities and goodies I get in the 4Runner and I've been quite happy with on and off-road performance though I havent spent as much time off pavement as I'd like. Cargo space is limited compared to the 100, but not by a ton. My dog seems to like the 4runner more: I kinda dig the tailgate on the 100, but the pup loves the power rear window on the 4runner. Both have power, but both also bog down a bit in the wrong gear/rpm range. Both are comparable noise-wise, with my LX coming in maybe a hair quieter. I like the cloth trail interior more than my leather 100, but thats for dog protections reasons.

A-TRAC and a locker are nice bonuses on the 4Runner Trail and the kid in me likes the crawl control and traction dials in the overhead console despite the fact that I'll likely never use them. For someone new to wheeling, I'm sure they'd be very helpful. I'm sure they'll prove useful at some point, but they light-up red at night and serve the purpose of putting a smile on my face regardless.

Regarding the Limited vs Trail discussion; that'll be a tough one. My wife liked the Limited more because it was shinier, but I had my heart set on a Trail. I didnt want leather, but I wanted the tech and offroad goodies. I also really didnt want color-matched bumpers and trim. Also, if you absolutely need third row seating, the Trail won't be an option for you as it was not offered. I have the tray system in the back of mine and though I thought it was kind of hokey when I first got it, it's been slowly saving my lower back one costco run at a time since... I'm a big fan now.

When I bought my Tacoma in 2007 I went for the TRD offroad to get a locker and to avoid the TRD Sport's hood scoop. The 4runner trail now only comes with a similar hood scoop. Though I think it looks cool on the 4runner, I really dislike seeing it from the cabin. Trail hood also tends to shake a fair bit as many did not come with the insulative liner that came standard on the Limited models. This is a quick and cheap fix from Toyota, but something to be mindful of. It was common when I had my Tacoma for TRD Sport owners to trade hoods with TRD offroad owners who wanted to play musical hood-scoops, maybe I'll trade mine out some time down the line.

The Trail wheels are another potential concern: though I dont plan to keep mine longer than this current set of tires lasts. When I got mine it had a bit of a shudder at high speed. I got it in to my local trusted tire shop to find that the tires were way out of balance. They were able to get them very close to balanced, but explained that balancing issues tend to be common on my specific wheels because the hub opening tends to be quite large which requires a cone be used on the balancing machine. The large cone they use to make it fit tends to leave some play which can cause lingering balancing issues. This isnt a huge problem, but worth mentioning in case you run into similar issues.

I'd like to make an argument for the 4runners gas mileage, but that would be a poor comparison to make because my 100 is lifted on big rubber. That being said, I expect after lifting the 4runner and stuffing some 33's under it I'll still be getting a handful of mpg higher than what I get with my 100. On stock-sized rubber the 4runner will pull 21 mpg on the freeway with a light foot! Even if that drops to 17 after tires, I'll still be saving $ on my long road trips.

Finally, it should be noted that the biggest trade-off in the switch has simplybeen the feel of the vehicle. My new-to-me 4runner feels like a grown-up version of my Tacoma, which I like. However, as much as I enjoy it, I am abundantly aware that I'm not driving a 100-series. The 100-series, if only by a pubic hair, drives heavier. I always felt like my 100 was a tank and I just dont get as much of that feeling with my 4runner. I'm adapting to the sportier feel and I'm growing to like it, but the transition has not been without some occasional melancholy.
1986 Porsche 944T Race Car - 310hp, Bilstein Escort Cup, Momo, 2700lbs wet
1987 Land Rover 90 2.5TD - In-Process ground-up nut and bolt Restoration
2004 GX470 - Radflo 2.5's, IVD Coils, SPC Uppers, MT F/R Bumpers, Engo, PFran
2013 4Runner Trail - Stock

Update. Not as happy as I'd like to be with the 4Runner. It's a great truck, but it's not a 100 and I'm struggling. It's sportier, but I miss the 100's tank-like feeling. Time to think about selling the 4Runner.

I would be interested to hear others options or long term comparison on the ride between the 2, I long for the newer amenities and lower mileage but at the same time the ride comfort of my 06 LX is soooo good that we are even thinking of taking it on an upcoming trip over my wife's 2015 Nx200t
Scott
Currently cruiserless

We have both, the 4runner feels a lot more car like driving than the 100. For a more nimble daily driver the 4runner wins. But for a more solid feeling ride that you can fold down the seats and haul plywood with, the 100 wins. Long trips on the 4runner are decent but the seats lack good support and you find yourself doing the butt check shuffle to stay comfortable after 5-6 hours of driving. The 100 is like sitting on the couch for road trips but gets worse gas mileage. 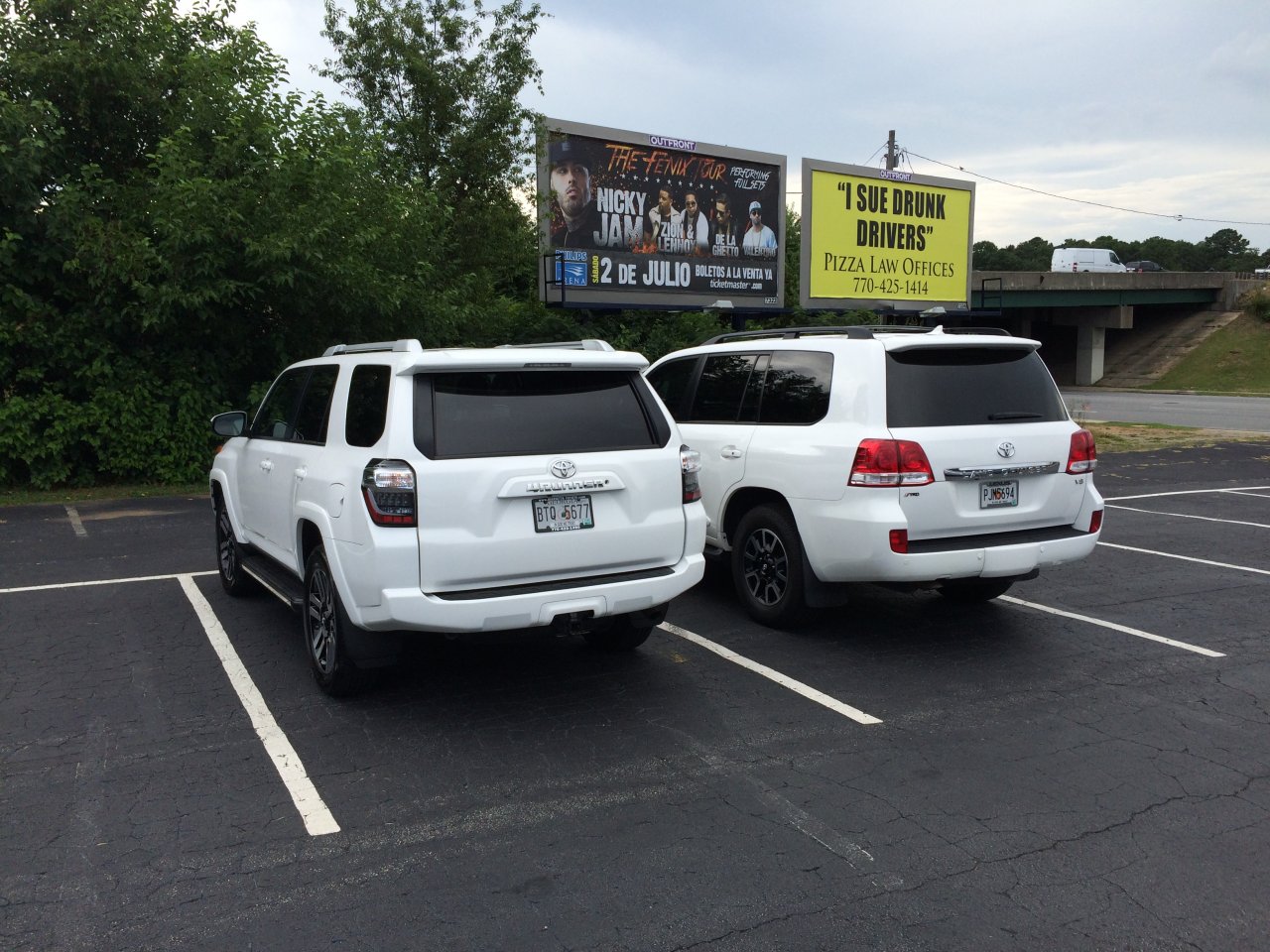 I bet the 200 is better, just cost prohibitive for most
Scott
Currently cruiserless 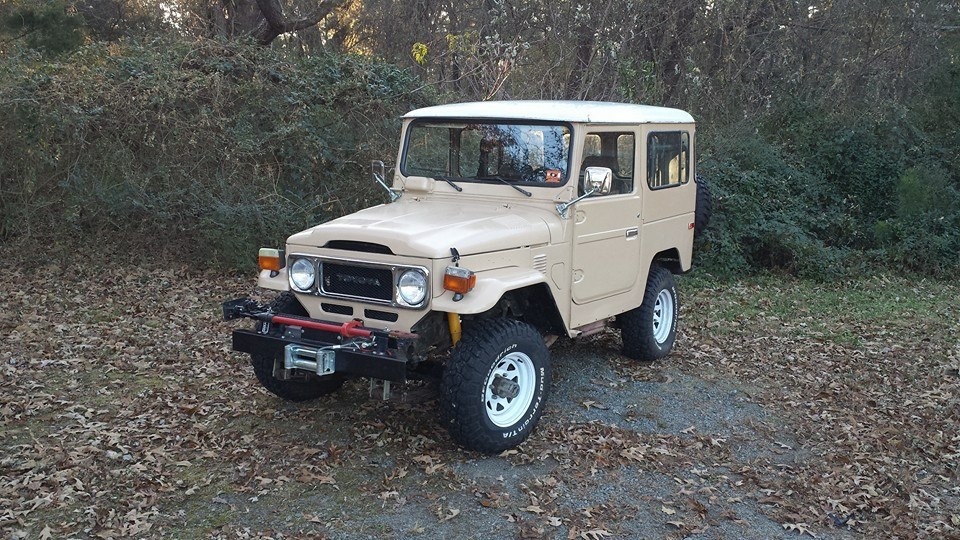 The 100 is one of the finest vehicles on the planet. Mine is low mile (150K) and tight as new. The seats. Man. Most comfy ever.

I'm really enjoying this truck. It's smaller than my 100 series; but not by much. For me, it's the perfect daily driver and travel rig so far. Driving it is more nimble than the 100 series, and just as comfortable. I had heard people say the TRD/Bilstein suspension was too soft, but I think it rides just like my other Cruisers with OME heavy springs/firm shocks. Firm but not jarring by any means. Suspension handles rocks, sand, and washboard with ease. Steering is precise, with no obvious under or over steer; although I'm sure in 2WD I could drift the rear if I wished. The Terra Grapplers, which are Standard Load rated, have held up fine, even being aired down; showing no slices or chunks out of the sidewalls or tread.

I'm particularly excited about fuel range. My cruiser used to get 10-11 mpg in town, 14ish on the highway. I'm not too concerned about fuel prices, but the ability to travel farther without fuel worries is what I really like. The Runner is getting 17 in town, 22 on the highway. A huge improvement in range (almost 400 miles a tank as compared to 250 in the Cruiser).

Crawl control, while being noisy (brakes are chattering) and atrac work really well. The rear locker/front atrac is best of all worlds, in my opinion. Great traction and no loss of steering control.

It's got about 300 miles of dirt on it so far, and the size is an advantage on tight Arizona trails; although in my case the dark color is going to take some extra care. I do like the fact that it's low key...all the goodies aren't very obvious. I think this will be a definite advantage for my Mexico travels.

Heated windshield and seats are a must for Flagstaff winters, and the interior has been easy to clean from the 10 year old typical kiddo stuff.

I don't miss anything from my Cruiser. Only issue I've had is the non-matching spare tire from the factory, which was an easy fix...just ran $400 or so for a new tire and wheel.


Funny you posted this...just left that site. Great ppl for the most part, great info to be had...the moderator, not so much.

devildog92 said:
Funny you posted this...just left that site. Great ppl for the most part, great info to be had...the moderator, not so much.
Click to expand...