I'd previously started another build thread for a different FJ60 (Kaori). That truck was decent in terms of having all of its parts and was running and driving, but the body was too far gone for my goals. I debated long and hard about keeping her as a parts truck, but since I don't have a place to store a half taken apart truck, I decided that it was best to sell her as-is and start with a different truck.

About a year ago, I was doing my weekly craigslist search for land cruiser parts when I stumbled upon an FJ60 project truck with a perfectly straight and rest free body. 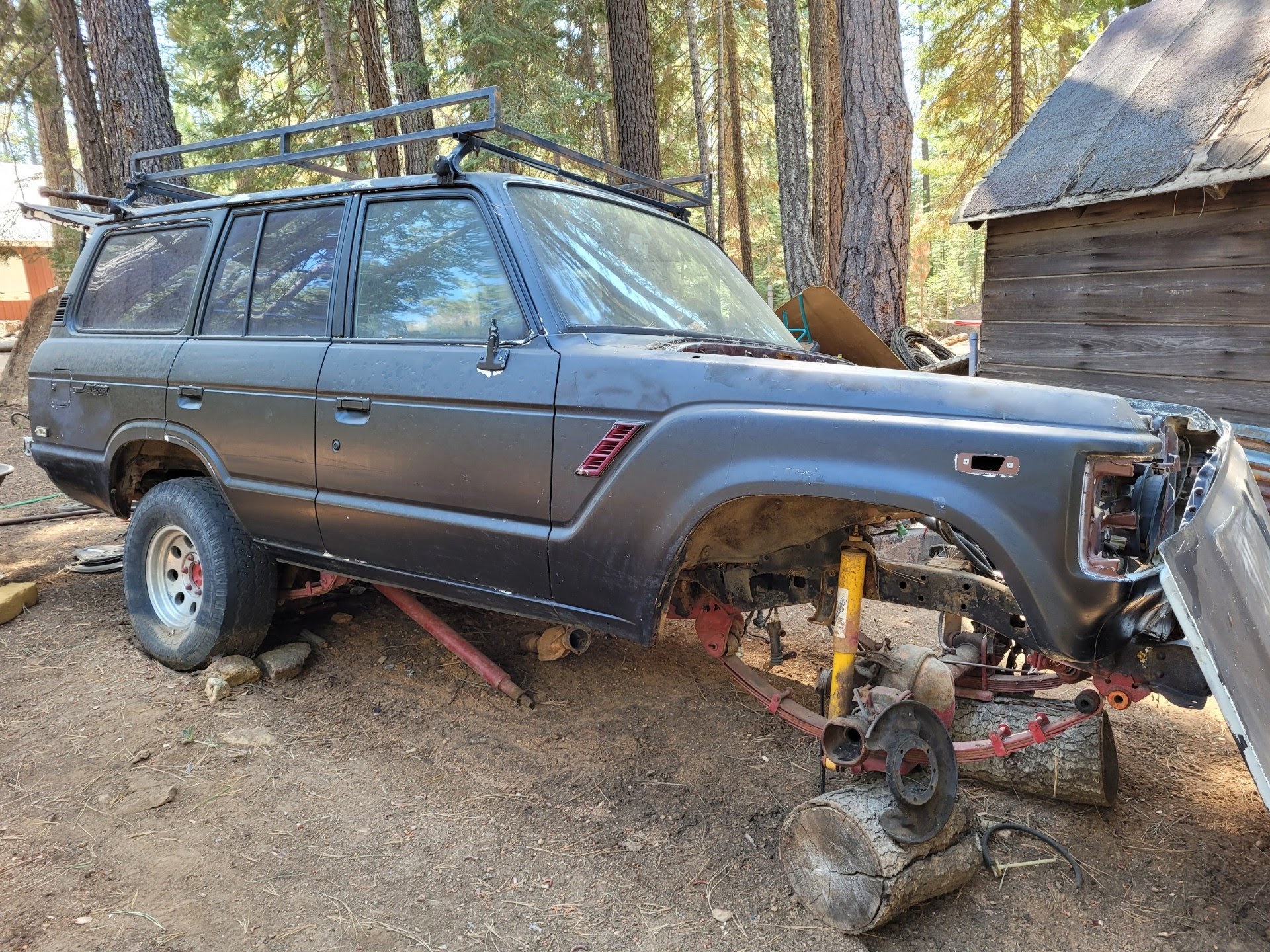 Enter Kaede. She is an 83 that when I found her was missing a drivetrain, front axle, and various other parts. She was high in the Northern California mountains just outside of Nevada City (well outside of cell phone and internet coverage, miles back on a dirt road between the trees).

I devised a plan to go pick her up, with a rented F250, a homemade tow bar, some chains/binders, a couple new wheels, and a set of magnet lights...and my dog, of course. 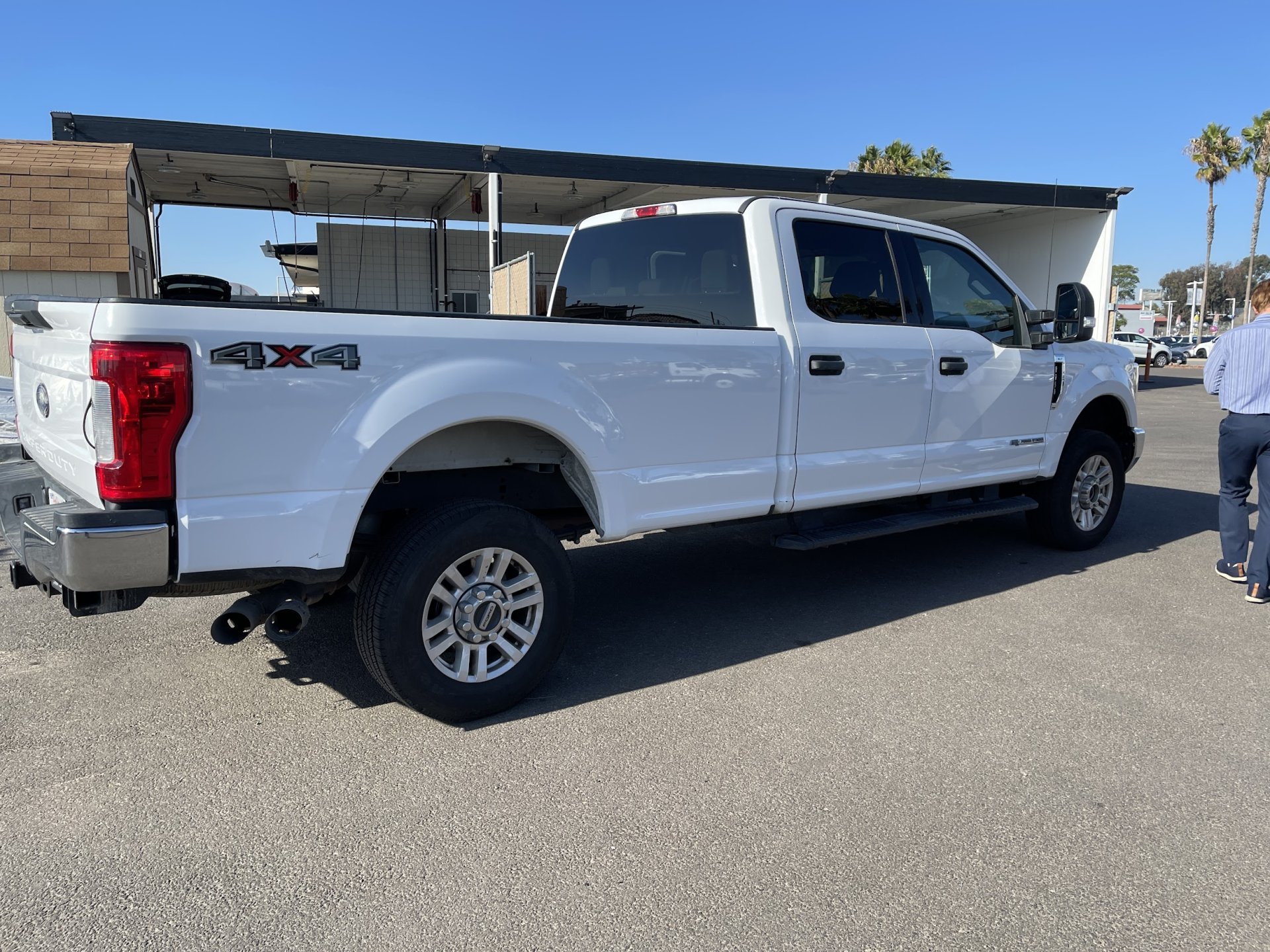 I left San Diego on a Friday evening, stopping in Sacramento for the night. Figuring that I would be able to get to the sellers house early in the AM, I would be hooked up and on the road by noon on Saturday, hopefully making it back to San Diego by Saturday evening.

Well of course the truck took the better part of 3 hours to get hooked up. Kaede was buried between a few trees and getting her configured properly for tow was non-trivial for a one man band. Eventually I got the new wheels on her, the connections straightened out, and all of the tools/parts loaded up. 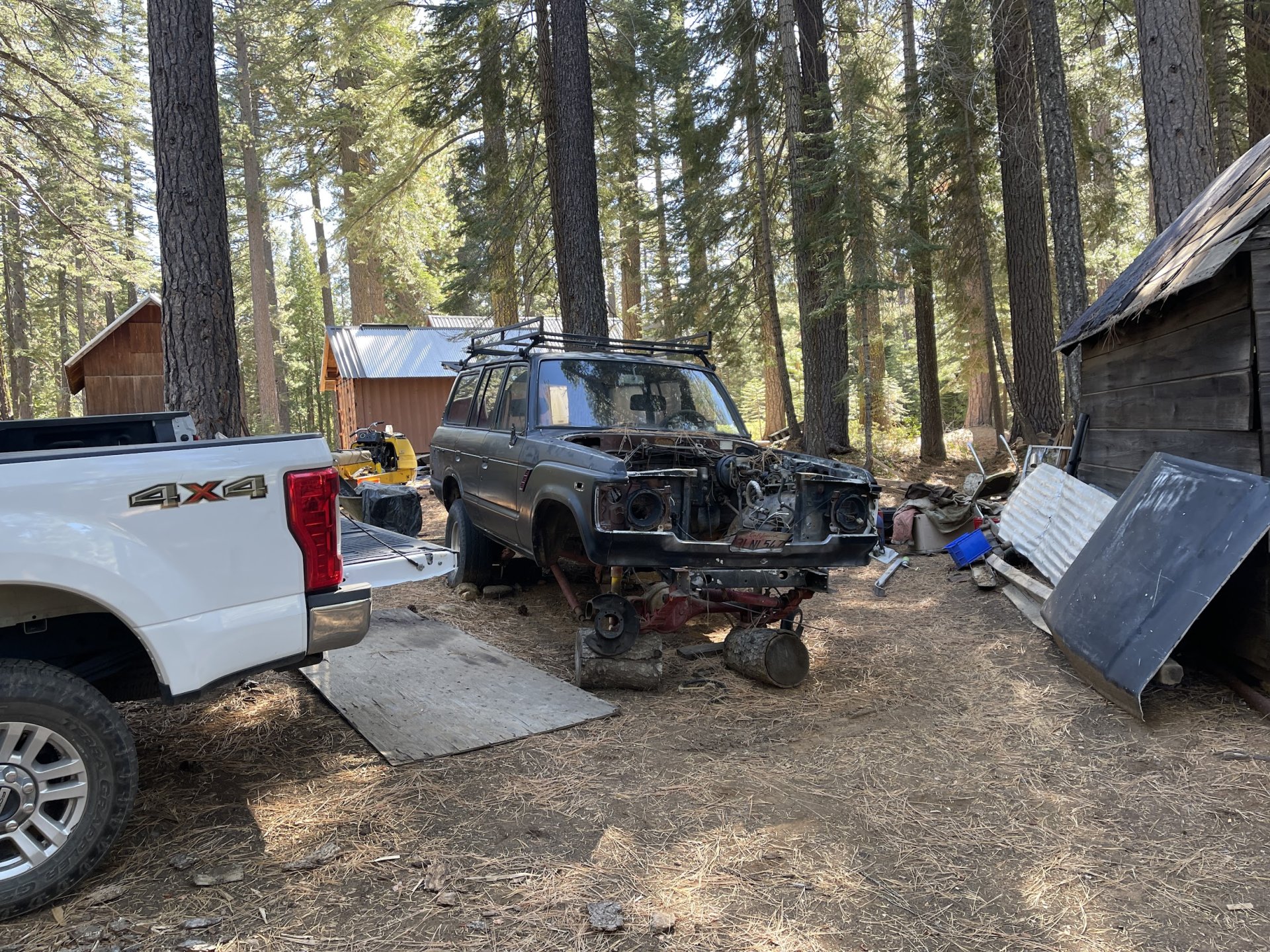 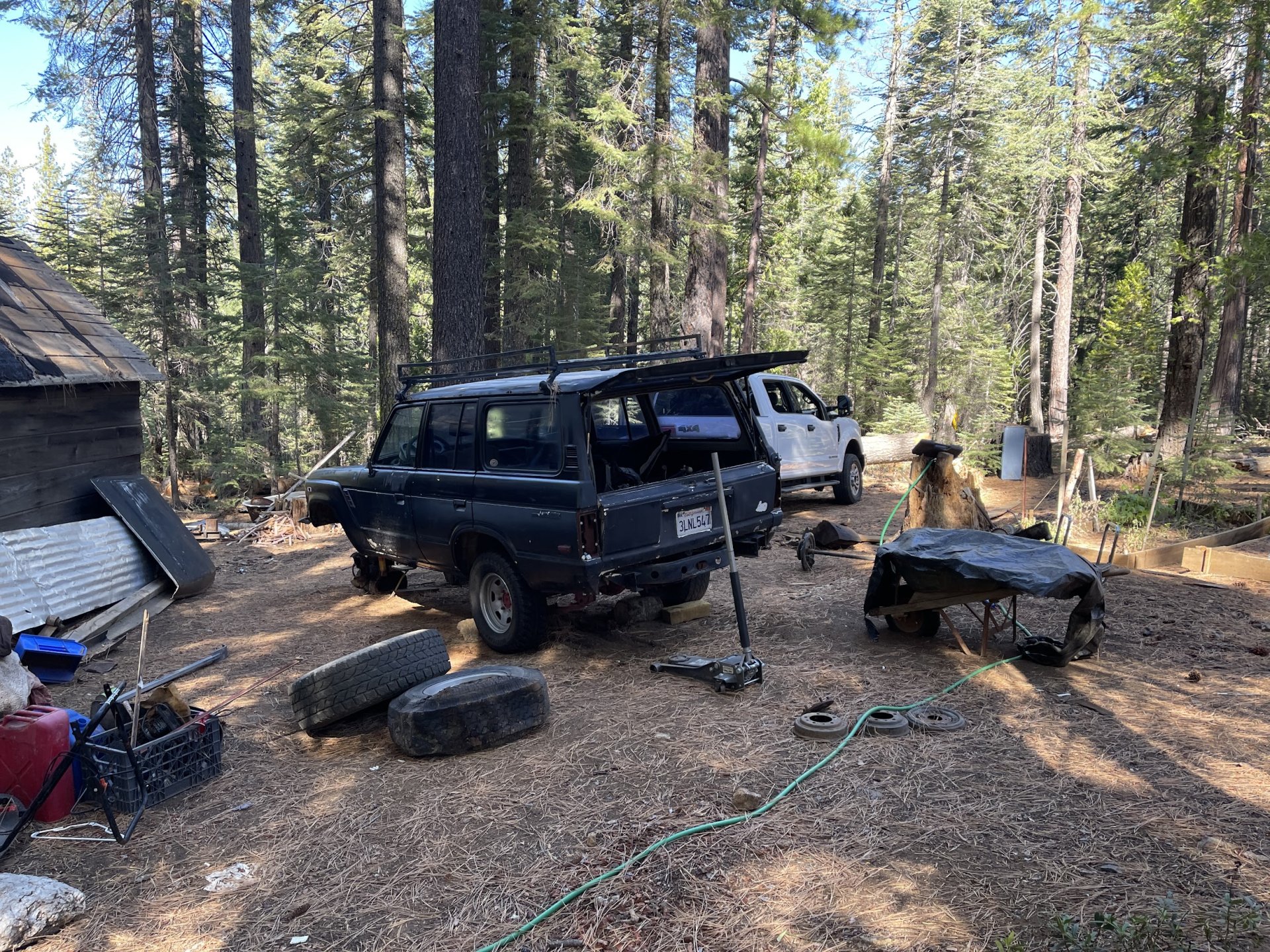 A few hours late, sure, but I was free at last...or so I though. As I towed Kaede out of the trees, I realized that her right rear tire was dragging and not turning...Oh boy. Immediately thought of a seized bearing or something that I otherwise wasn't prepared to handle.

After taking the wheel off and banging on the brake drum for a bit, it was evident that the brake shoes were stuck to the drum from sitting for so long. I hammered and pried for hours trying to get her loose to no avail. I knew I needed heat.

So I asked the seller if he had any kind of torch. He thought about it for a bit, and said "Yeah, I got this old welding thing in trade a few years ago, if that's what you're looking for." In one of his barns down the hill and around the corner was a full oxy acetylene torch setup. I was excited as that was the exact tool that I needed, but anxious if the lines were still good and the bottles held gas. Hesitantly I turned the regulators on, and was happy to find both tanks full and the torch operable.

After lugging the torch up the hill to where the Landcruiser was stopped, I caught my breath and started heating. While I heated the brake drum the seller hammered on it, and tried prying back and forth. Eventually we got it to move about 60 degrees back and forth. It still wasn't turning all the way around, but I figured it was enough momentum to get it going.

I put the wheel back on, lowered her back to the ground, and rocked her back and forth with the truck. Eventually I was able to get the brakes free and the wheel rolling smooth.

I reloaded my tools back in the truck, put my dog back in the back seat (she had had a blast running through the woods and swimming in a local pond during all of this), and set out for the road. The sun was almost setting and I had a long drive ahead of me. 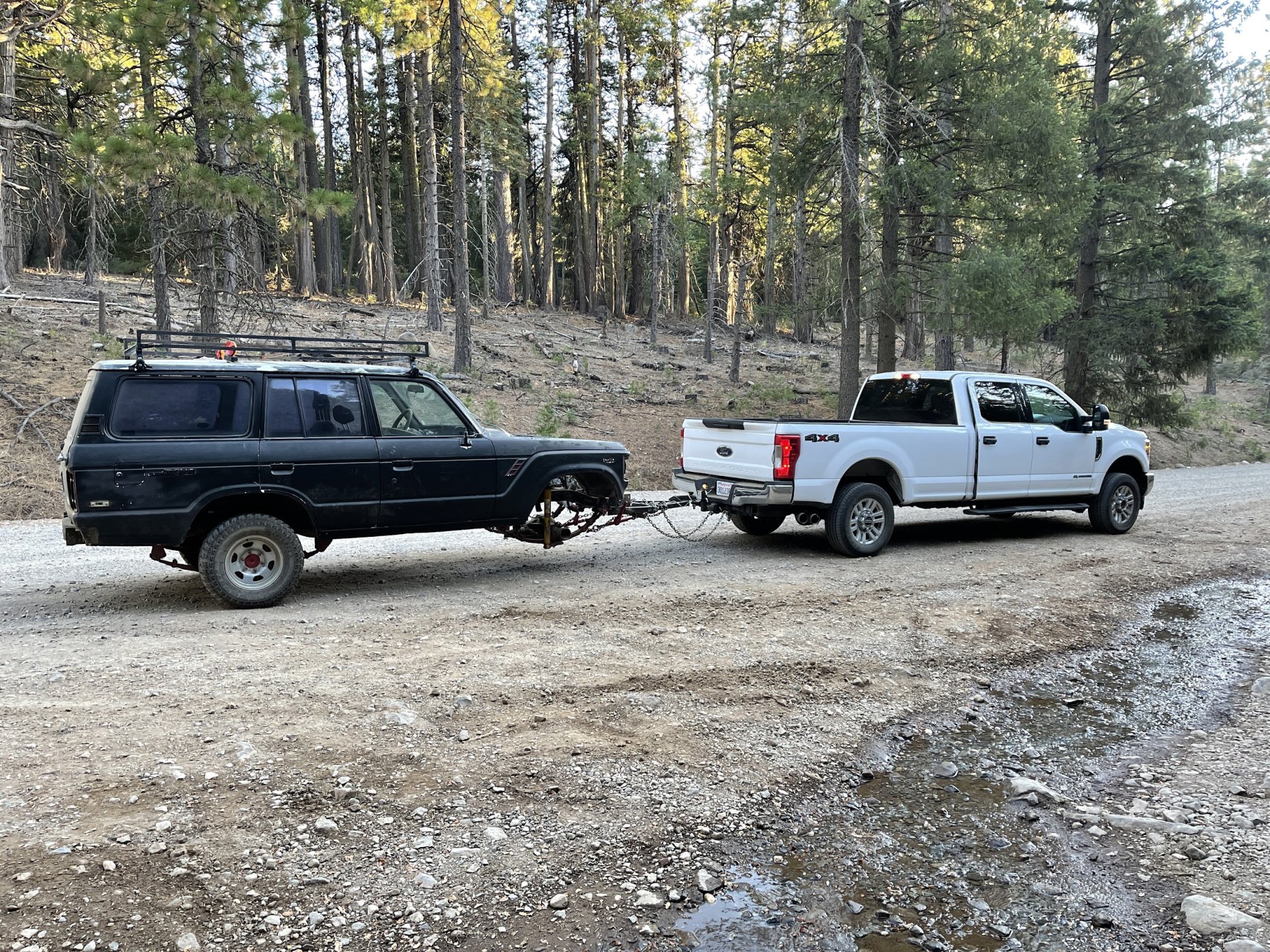 I stopped a few times on the dirt road to reset the chains and binders until it rode level, and refilled my water bottle (and my dogs water bowl) at a local spring.

The rest of the journey home was uneventful. I was certain that every highway patrolman from Sacramento to San Diego was going to stop me the way I was towing her, but nobody seemed to care. I stopped at some small town outside of Fresno on my way back, but otherwise the drive was fine. I ended up home late Sunday evening, and got her in the garage and the truck returned.

I hadn't posted any of this in the past year becasue this project has been sitting on the backburner until now. I bought a new house just a few months before buying Kaede so I have been distracted by house projects in the meantime.

I also established an instagram account for the build. The handle is @Toyo_Kaede . There is nothing there yet, but there will be as I work on her more. Additionally, my youTube account is Jidosha Joe. Right now there is only videos of the other FJ60 on there, but In time I will post some of Kaede.
M

Here are some more photos of the water spring, towing setup, and of course dog tax. 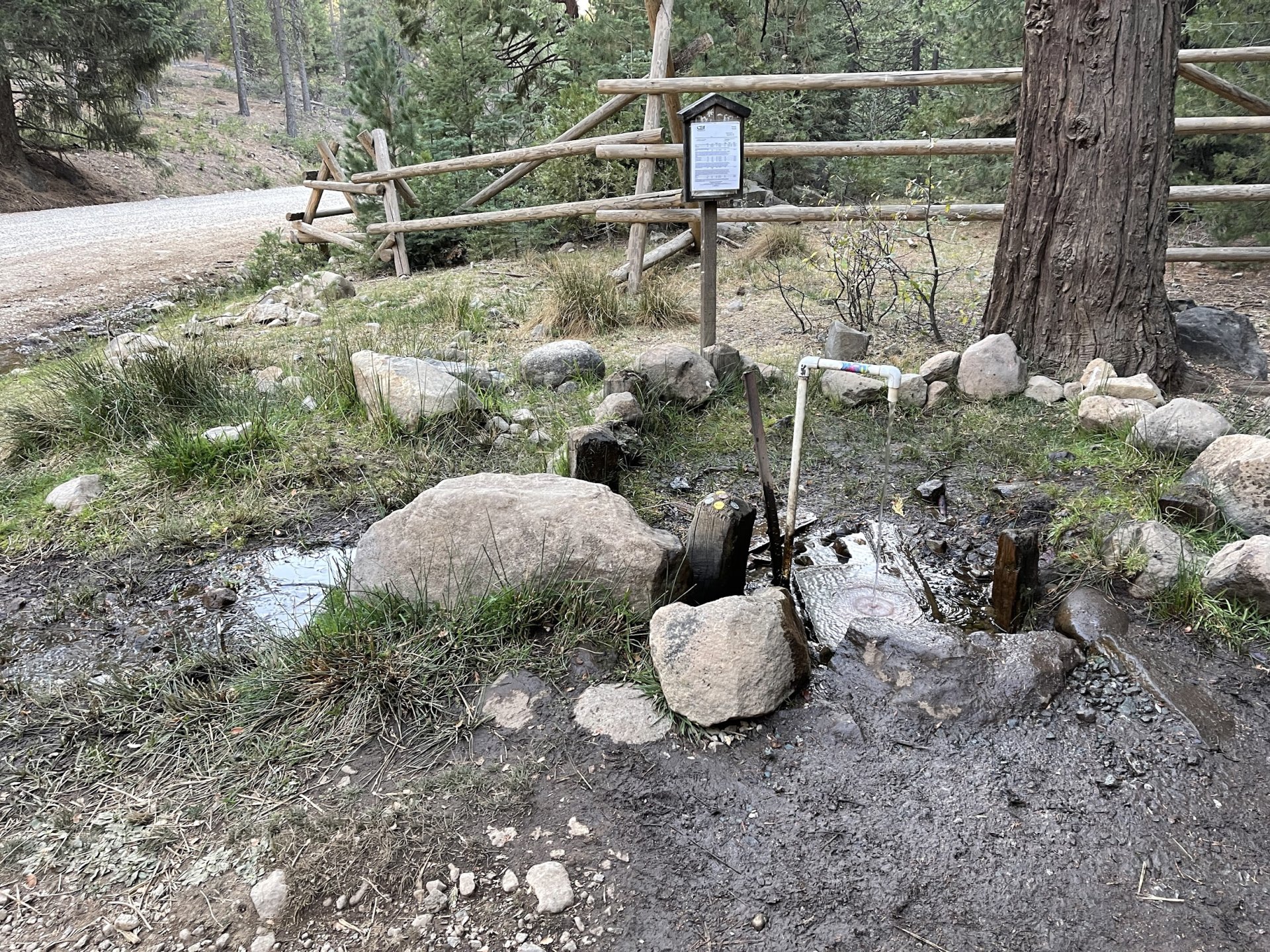 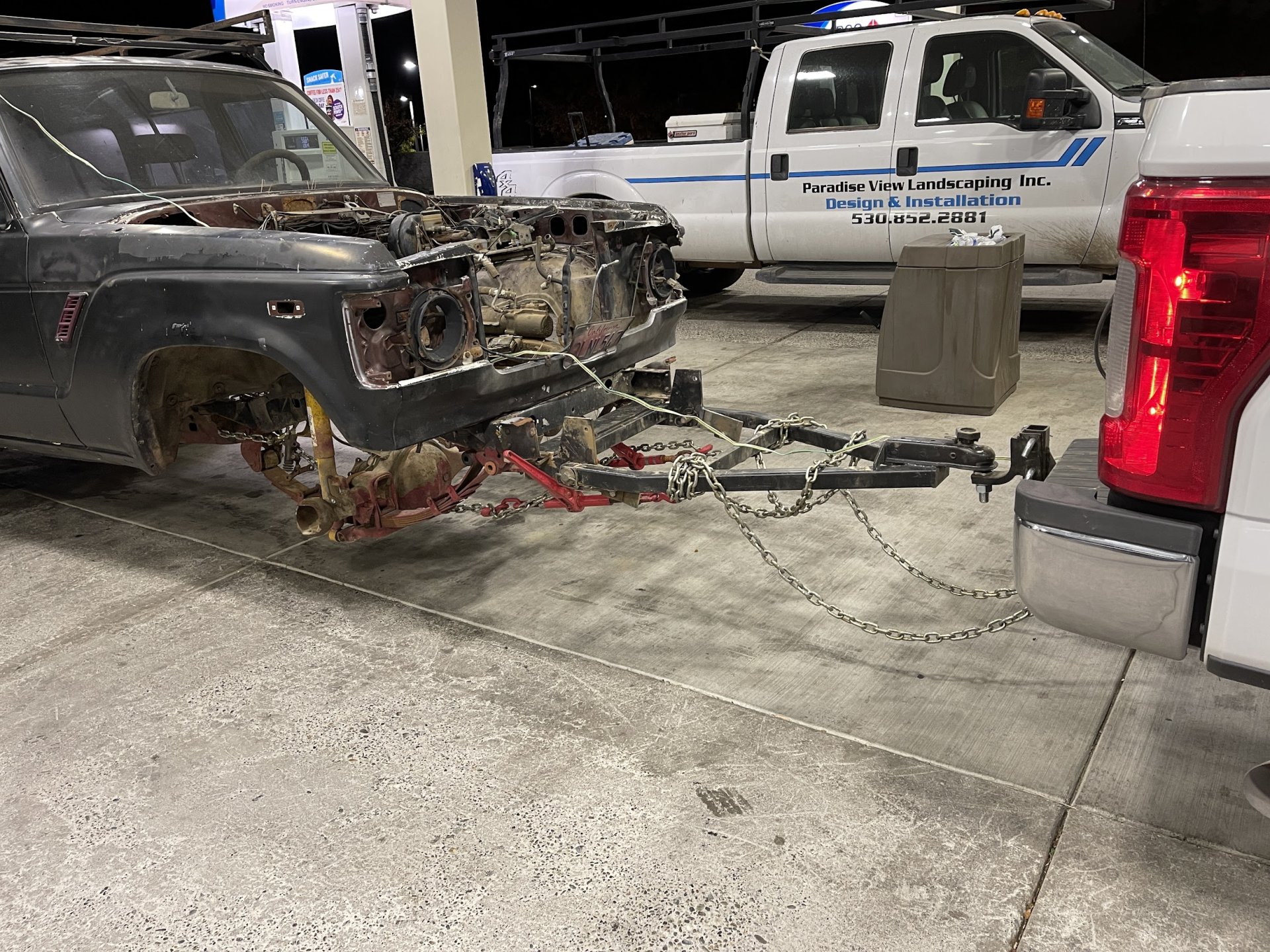 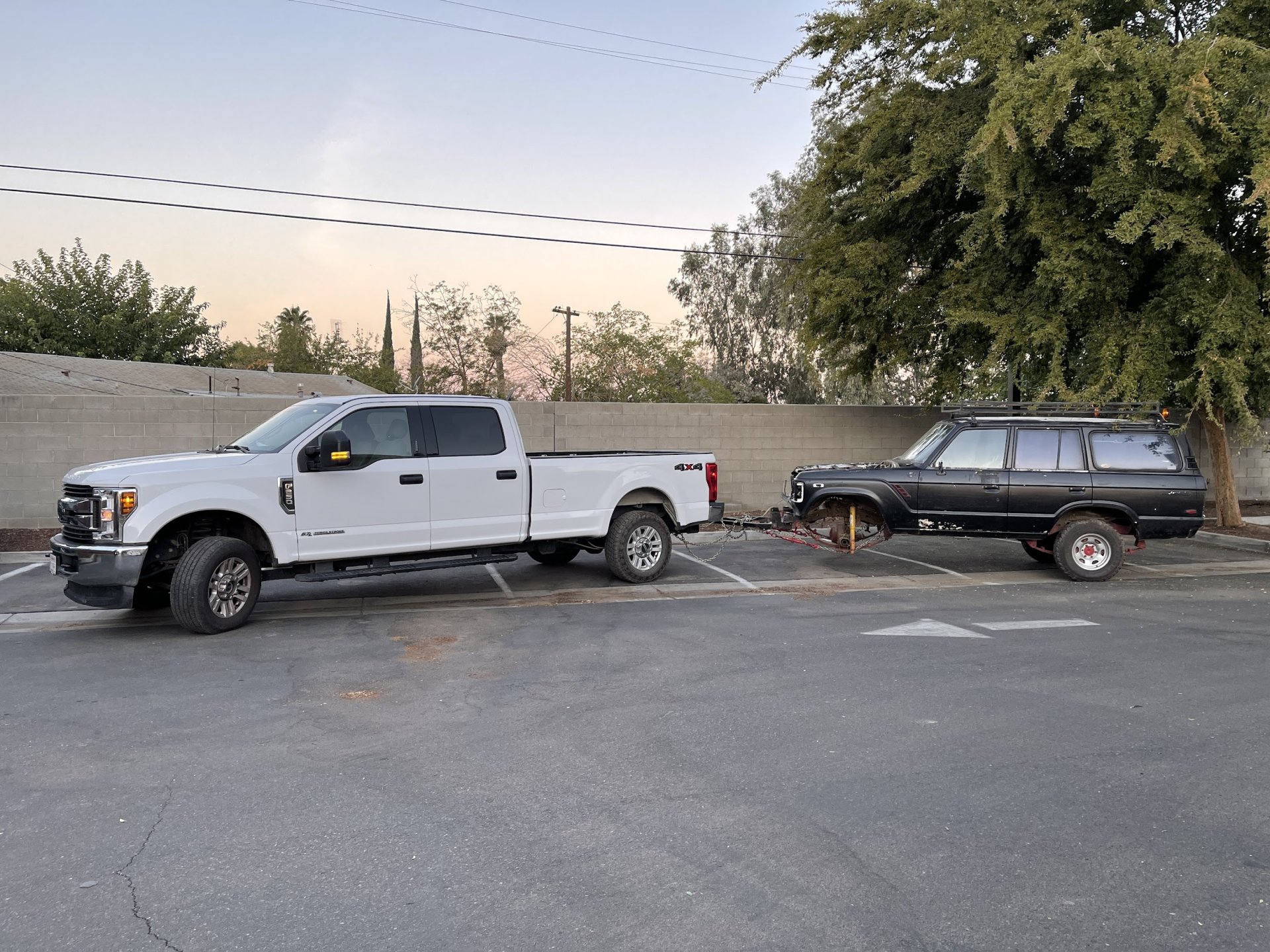 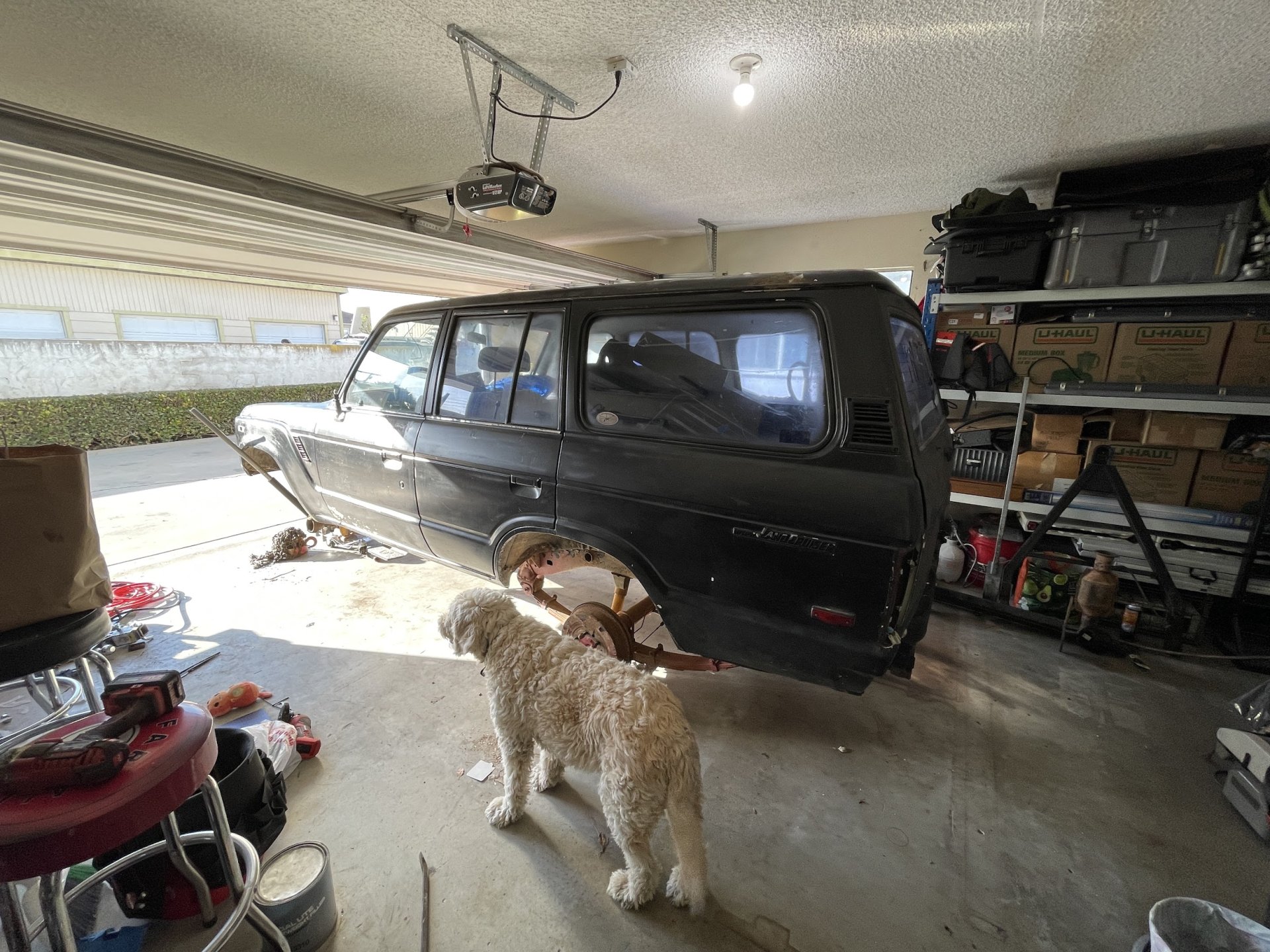 The impetus that got me started on this journey is that I've always wanted an HZJ-75 or HZJ-79, but with how rare those are in the US, I always thought it a far fetched idea.

Fast forward to November of 2020. I was previewing an abandoned property auction and found a few Isuzu diesel engine in a lot amongst other things being sold for scrap. I won the auction for an Isuzu 4BD2TC for $50, and got it running on a pallet at my buddy's work shop. 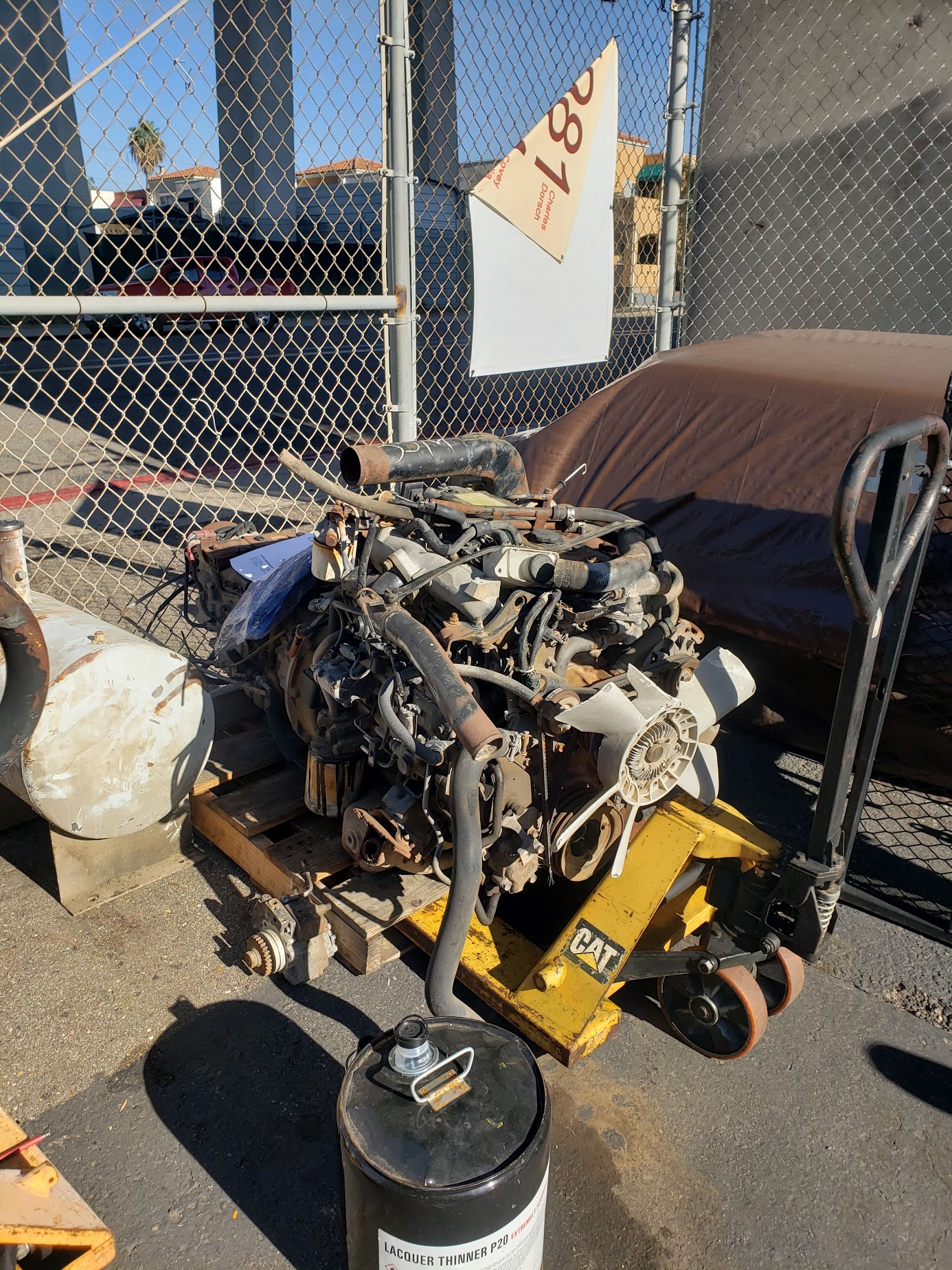 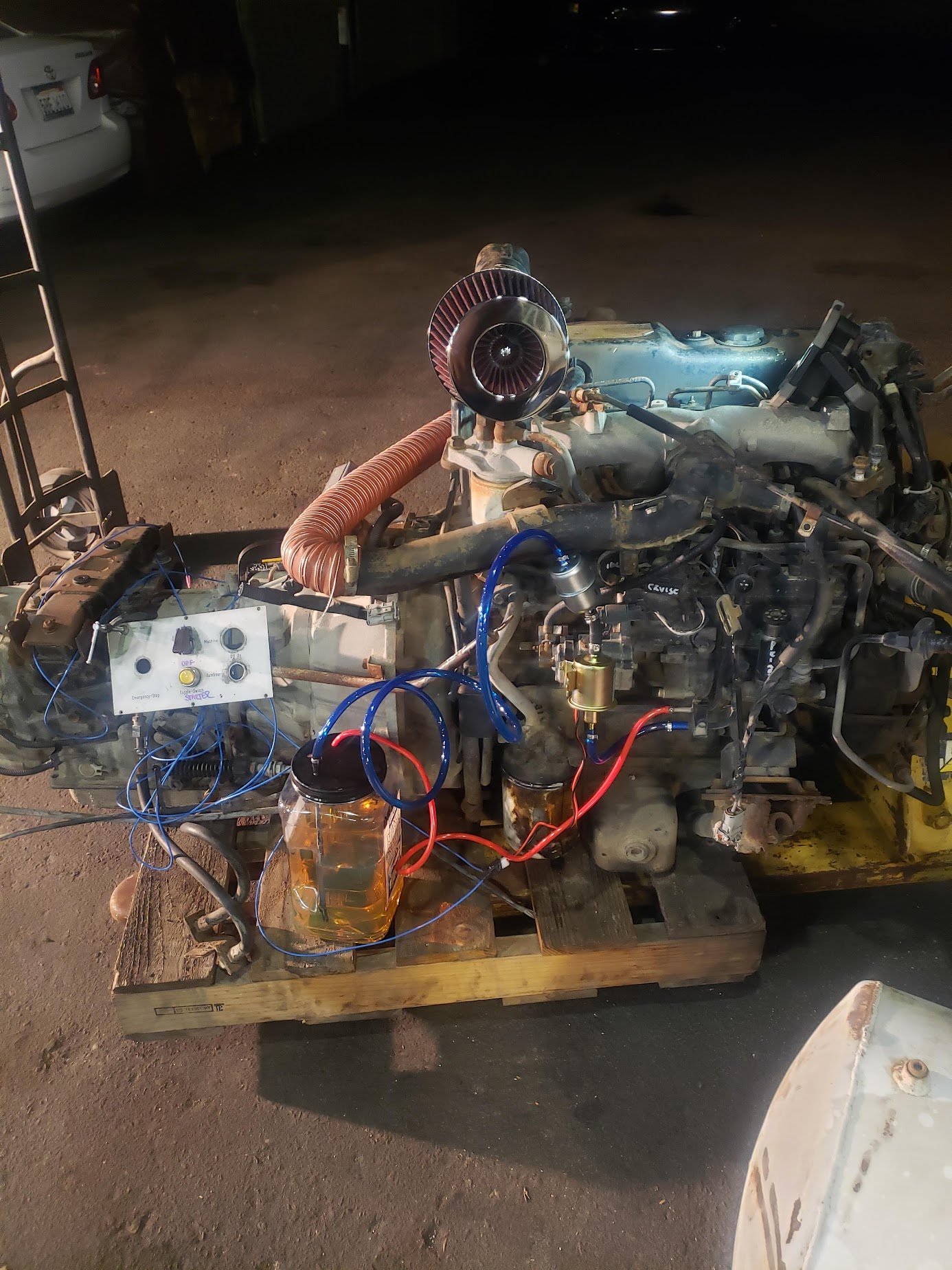 After figuring out that the engine ran, I started the search for a landcruiser and all of the other components I would need.

After researching for a long time I figured out that the best transmission to mate to the 4BD engine would be an NV4500. I found one on facebook marketplace near my grandfather's house in Missouri, and he shipped it to me along with a passenger side NP241C transfer case (and a spare driver side NP241 transfer case). 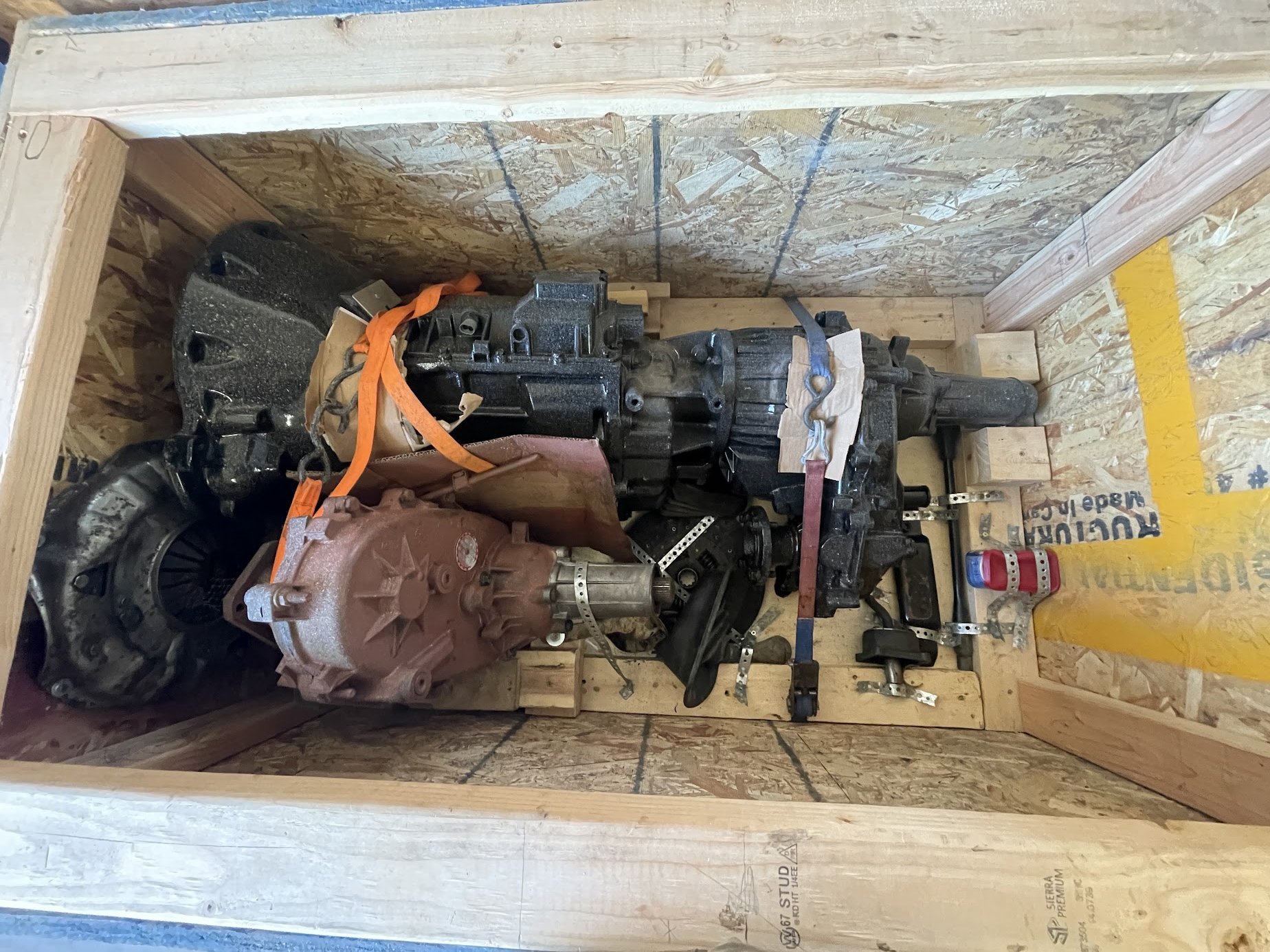 In order to get the NP241C transfer case to mate up with the transmission, I had to take apart both and swap some parts around so that it would work properly with the Dodge transmission 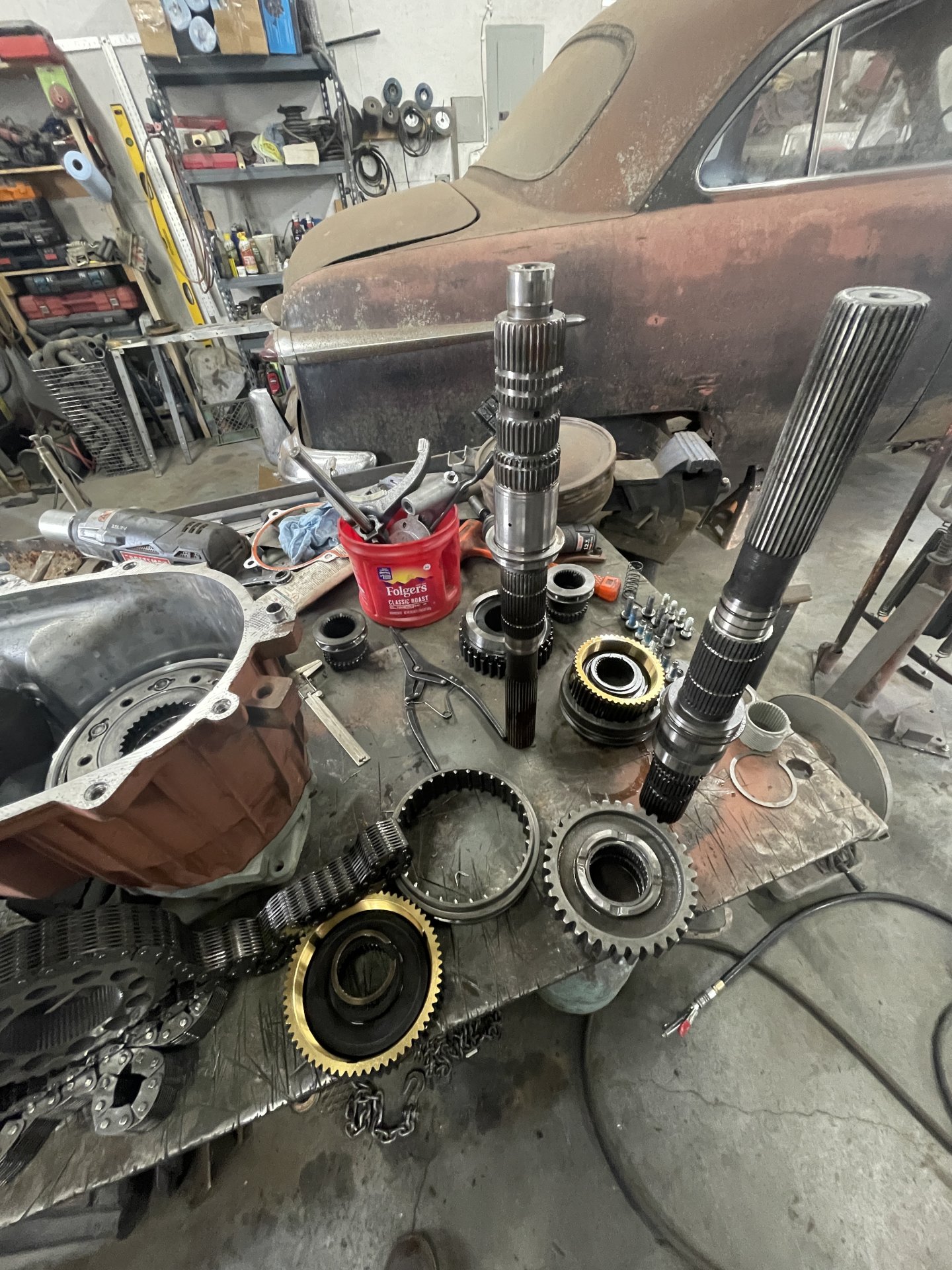 It's the only transmission that I could find a currently manufactured adapter for, and ordered a bellhousing adapter and flywheel from Roamerdrive in Canada. It was a bit spendy, but I didn't want to take all the time to figure out making an adapter myself. 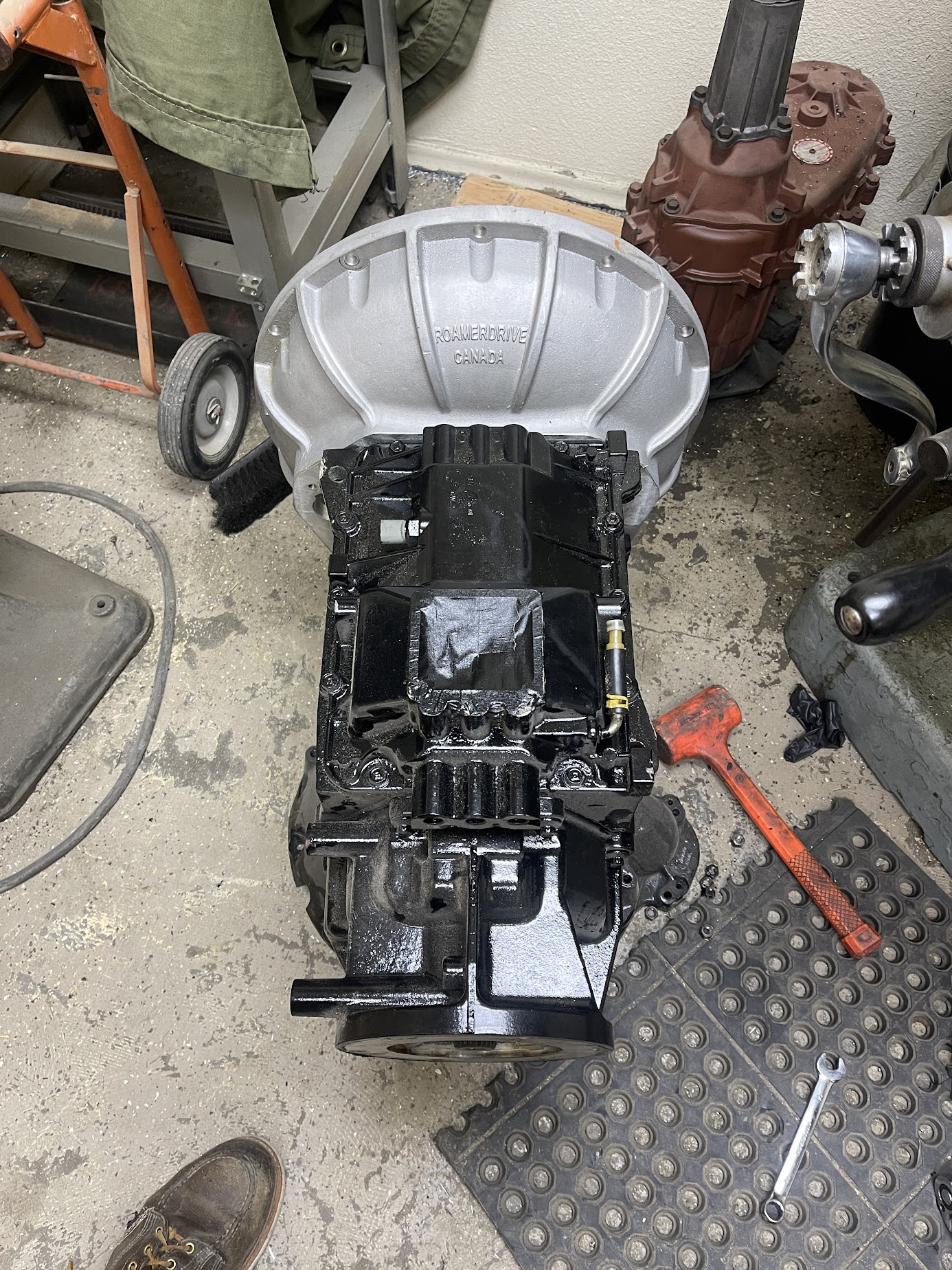 I was ordinally going to order the Chevy tailshaft housing for the NV4500 in order to get the NP241C attached properly (The driver side drop and passenger side drop mounting bolts are clocked different) but then realized that it was incompatible with the dodge output shaft. So instead I had to modify the tailshaft housing and mill my own mounting holes. This required some clearancing of the reinforcements fins. While I know it weakens the casting, it also came out of a 1 ton truck so I figure it aught to still be strong enough 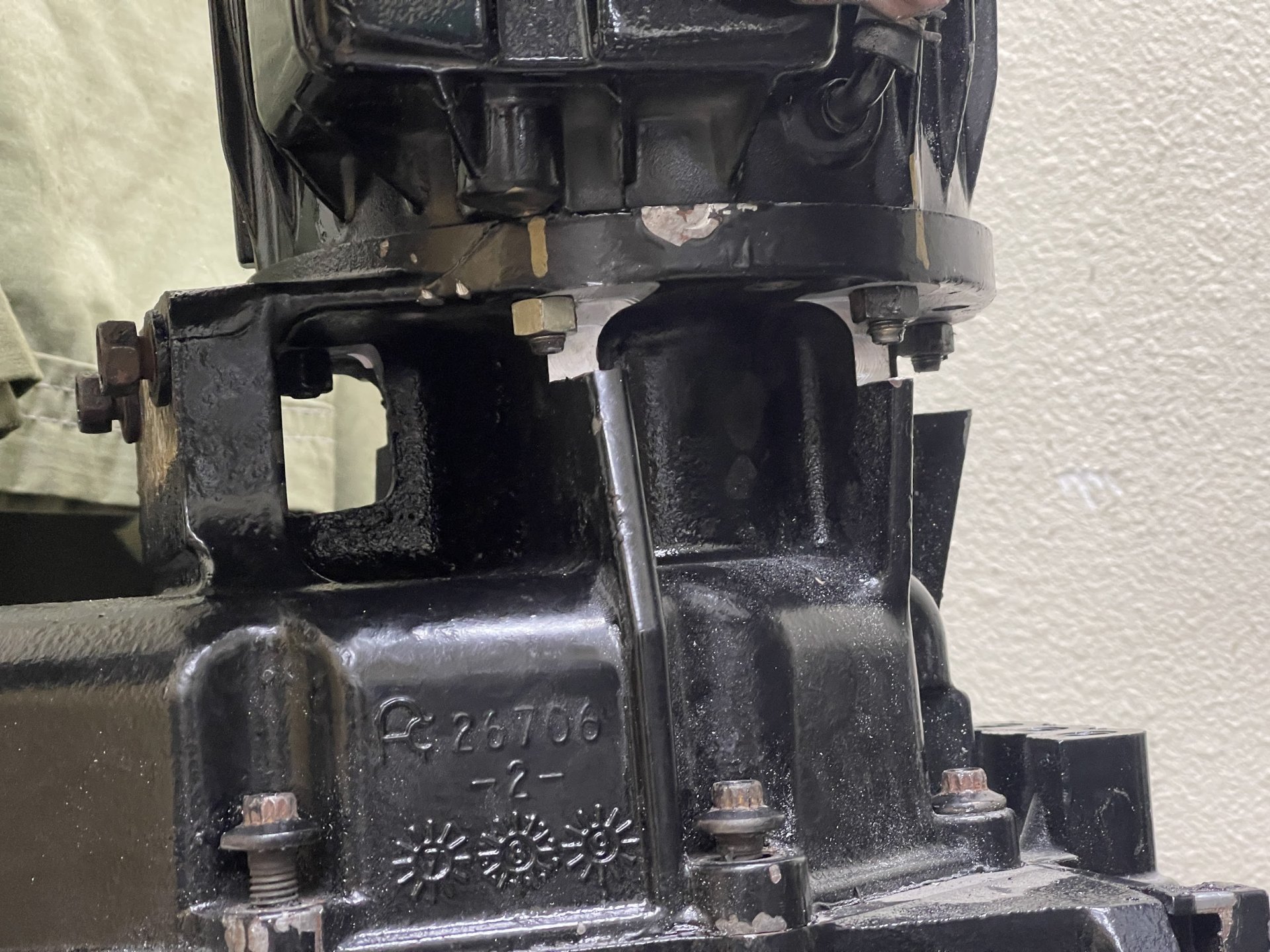