It's been a long summer (1 Viewer)

I brought my white 25 down to Phoenix in May to do a little work on it and found the frame cracked on both sides in front. After trying all summer to find someone close to weld it a local CSC member offered to weld it up (thanks Rhino). I brought my other 25 driver down to Phoenix last fall to install a snow plow. Well I bought two early fj40 hard tops to make a plow truck out of so never did nothing with it. So after a summer with no 25 to run around in the forest with I now have them both up north. The white one went up a week ago. The second one is the one with Torsen diffs in it. I really didn't want to use a towbar to tow it but because of a neighbor builting a fence between the garages I needed to get it moved now. I pulled the rear driveline which is something I usually don't do. But because I'm not happy with the way the pinion is set up in the rear diff(can't find shims) I pulled it. After the 140 mile trip all the bearings were cool to the touch. When I towed it down to Phoenix it showed up here on Mud, including the straps I used to make sure the late model hardtop didn't fly off at highway speeds. So I towed it up last Friday night under the cover of darkness. Now that I running a stock bumper I need to get a winch setup so I can pull people out of their driveways like I did last winter. 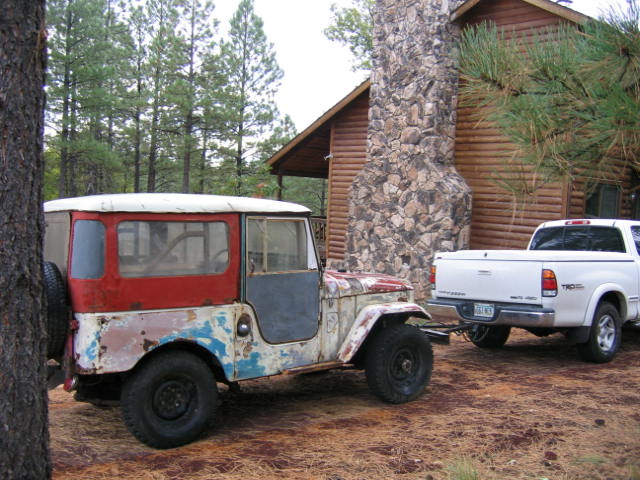 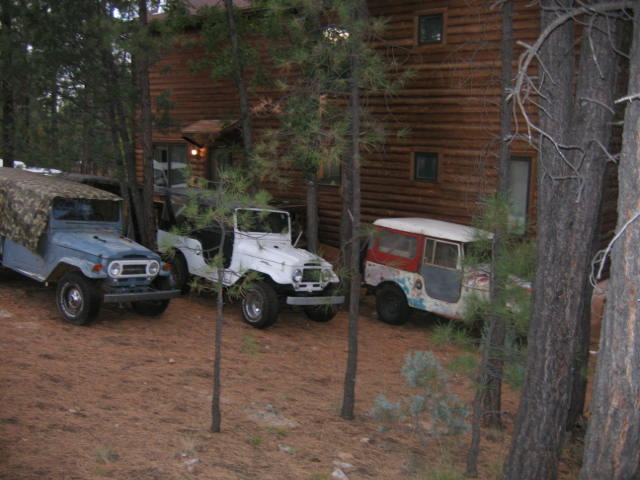 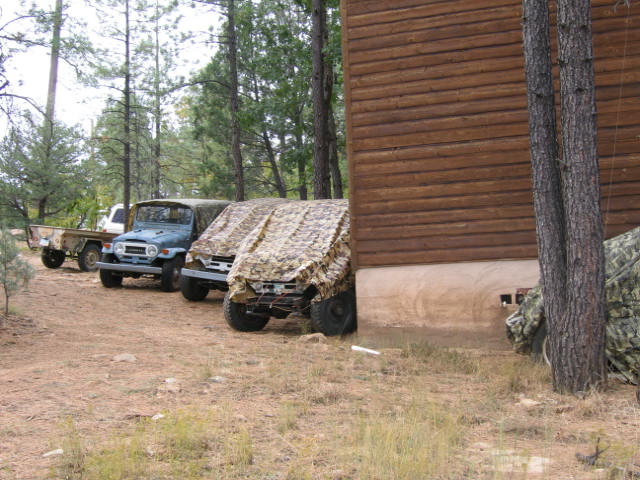 So do you have a plow now? That's one thing the three speed in the 40 is actually good for, plowing snow.

Are the camo covers so that Phil doesnt see them when he's flying overhead?

foxfab said:
Are the camo covers so that Phil doesnt see them when he's flying overhead?


I resemble that remark! I DO keep an eye out from the air, and on occasion have found on the ground what I saw while flying...kinda like geocaching...

And cabins with visible cruisers get special (water) treatment during fires

Living in the Past that house doesnt look like any area in Phoenix that I have been to.

Quote:
Originally Posted by foxfab
Are the camo covers so that Phil doesnt see them when he's flying overhead?

Quote: Cruiser_Nerd
So do you have a plow now? That's one thing the three speed in the 40 is actually good for, plowing snow.

Of course I have a snow plow, I think everybody in Arizona has one I guess the three speed would be OK but I thinking the H41 would be better with a Lock Right in the rear axle.

Quote: LandCruiserPhil Living in the Past that house doesnt look like any area in Phoenix that I have been to.

You need to get out more, the pictures are from one of the new sub divisions in the northern part of the city. Next time your in Flagstaff on the way back you'll see the Phoenix city limit sign a couple miles south of Flagstaff. I think it has to do with the race between Peoria and Phoenix to see who can annex the most.

The camo covers are to keep the neighbors happy there is a home owners association. I got to many cruiser hidden up there.