Is it safe to soak my upper intake in Simple Green to remove carbon?

I see a lot of people balking at the idea of soaking their upper intake in Simple Green, saying that it attacks aluminum. So I did a test, then forgot to post about it. I put a section of 1/8" thick aluminum into a container of undiluted Simple Green on 4/19 at 5:44pm. I used a Scotchbrite disc to knock off any anodization on the back side.

Here it is after a little over three hours: 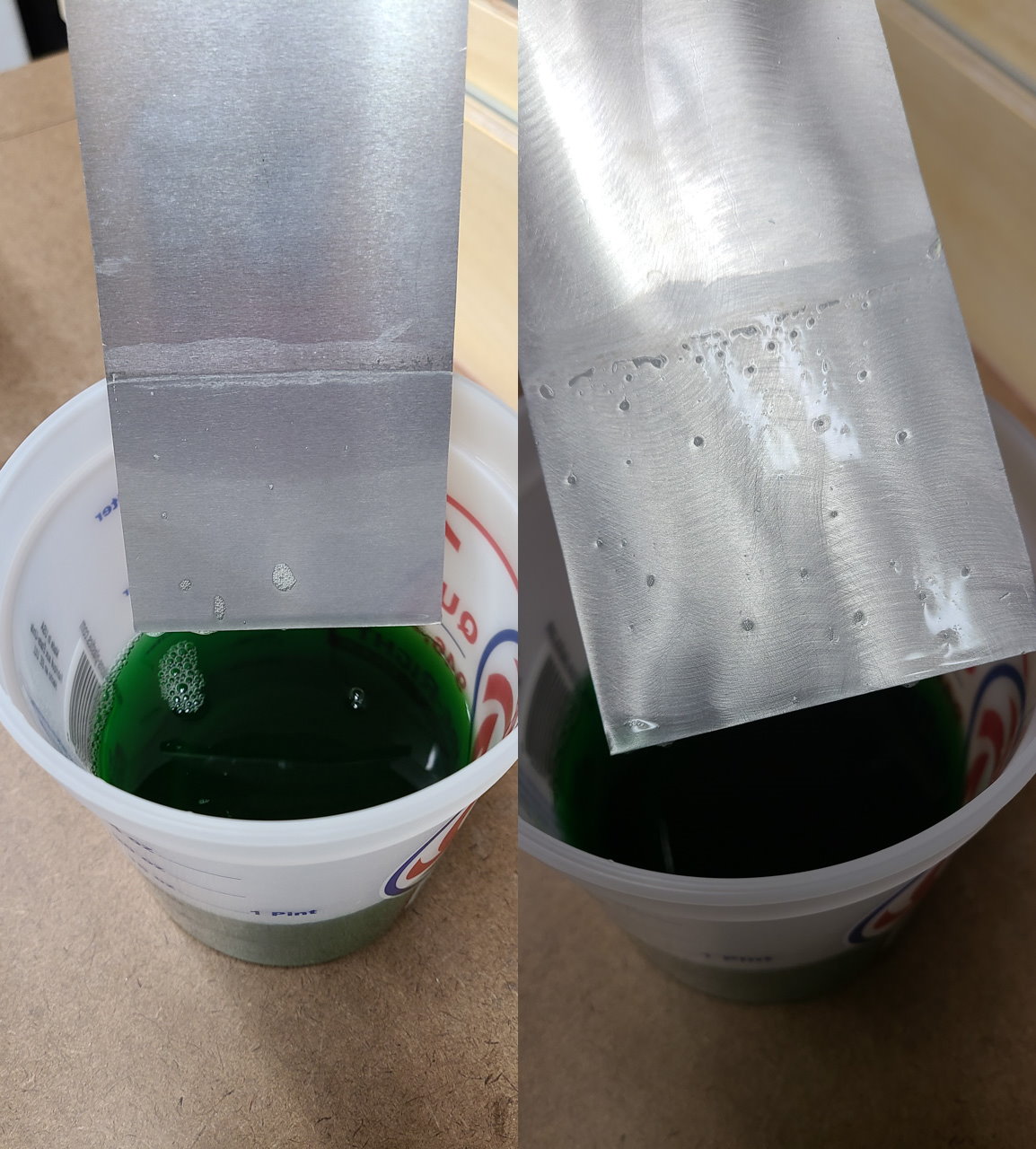 Here it is after around 28 hours: 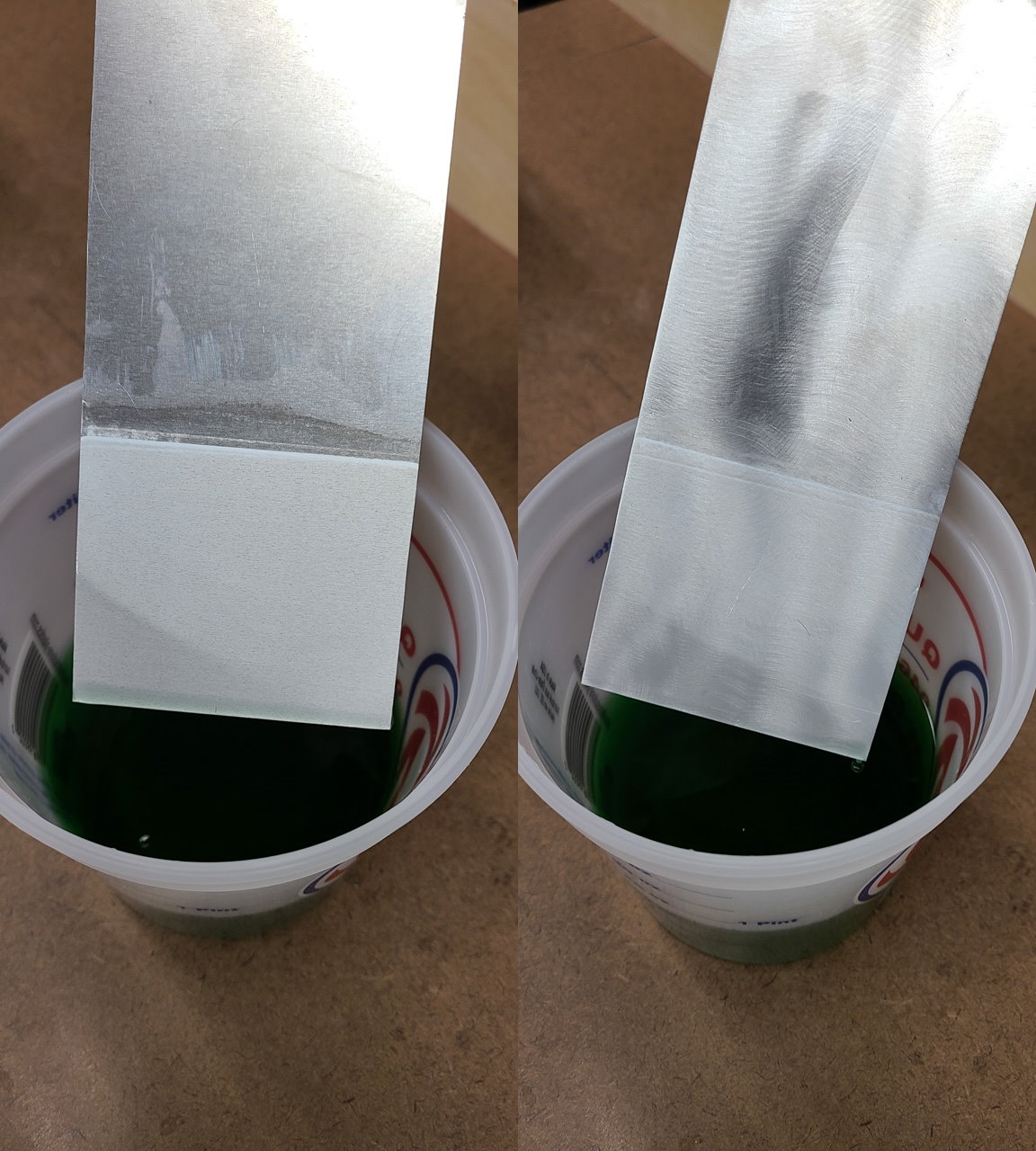 Some discoloration is happening.

Here it is after around 75 hours: 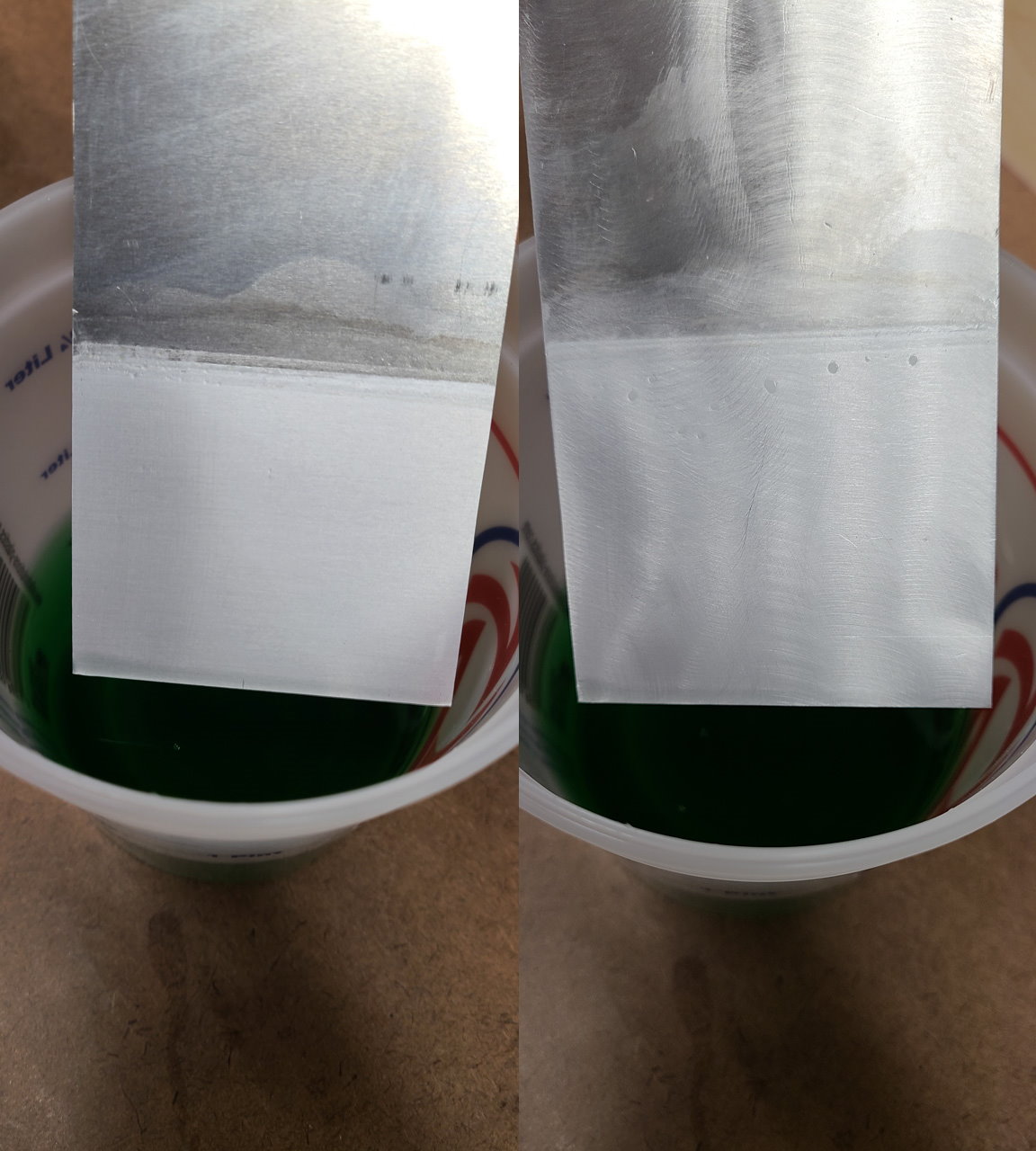 At this point, I ran a Scotch-brite disc down the left side, just to see how deep the discoloration was. It wasn't deep at all and polished right up: 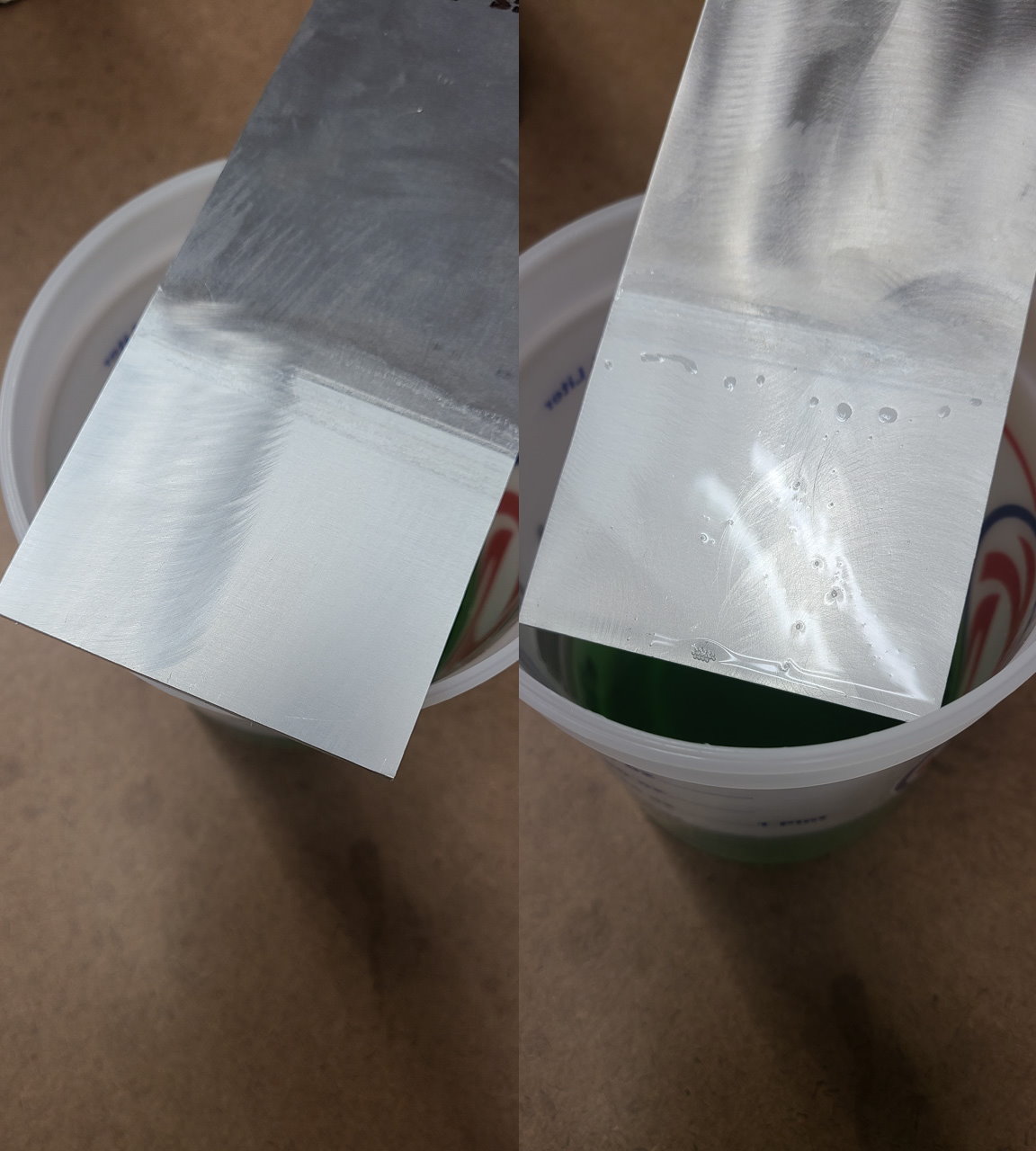 So, will Simple Green discolor your raw, polished aluminum rims? Yes. Will it dissolve or damage your upper intake? No.

Unfortunately, I don't have a 'before' picture, but the entire interior was coated with thick, black carbon and oil similar to what you can see in the lower intake here: 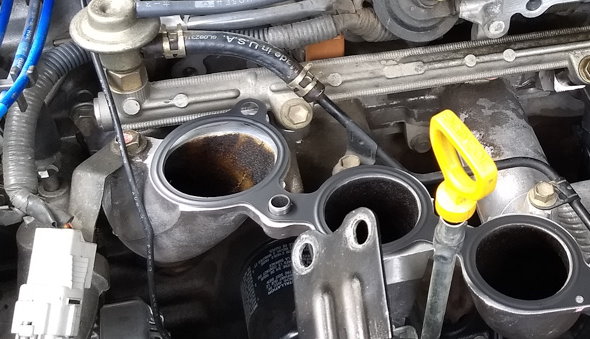 I soaked the upper intake in a tub filled with one gallon of Simple Green, then enough hot water to submerge the intake. It soaked for around four hours, intermittently scrubbing with various nylon brushes and running a bottle brush through the passages. Here are some photos of the result: 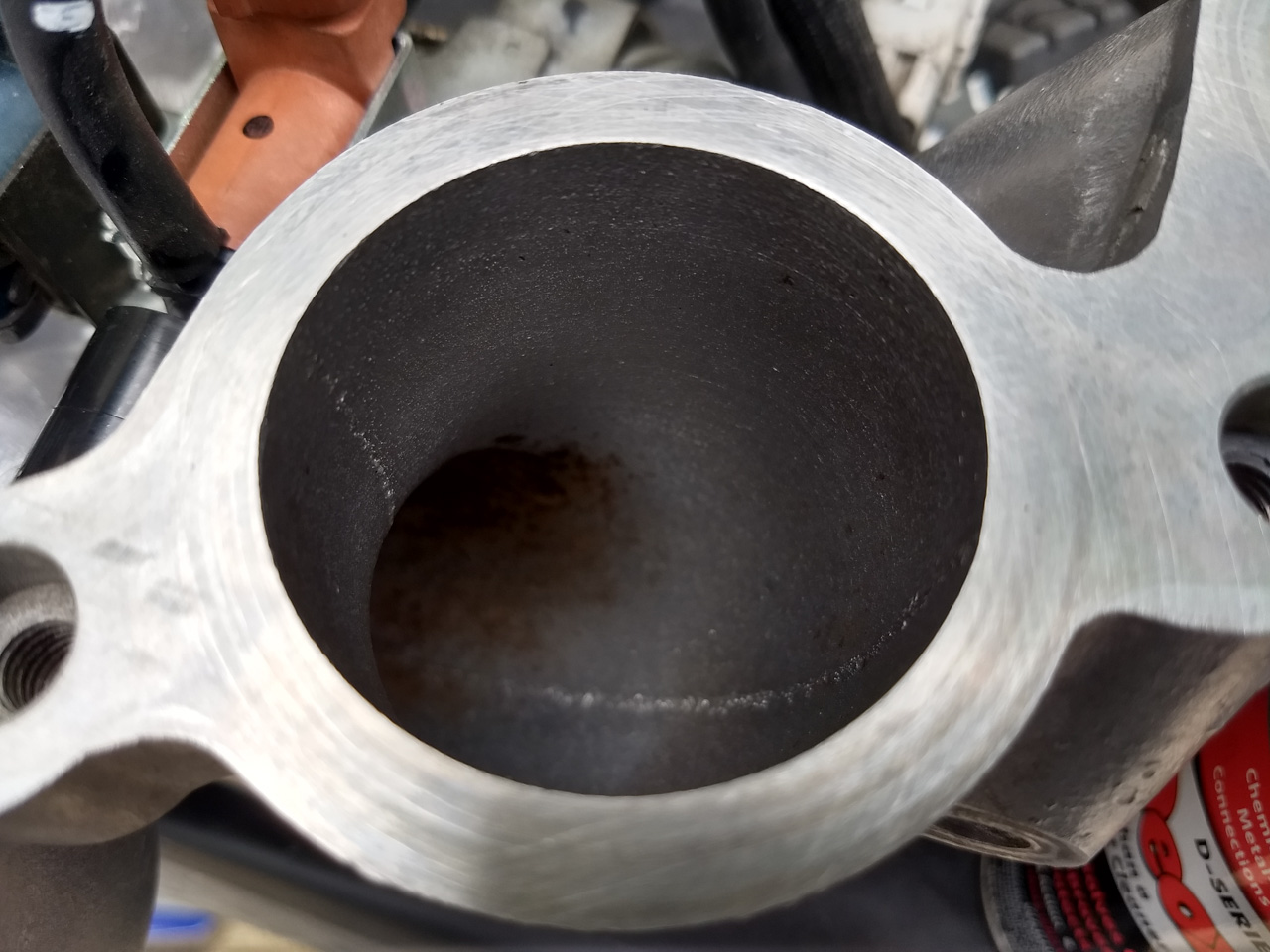 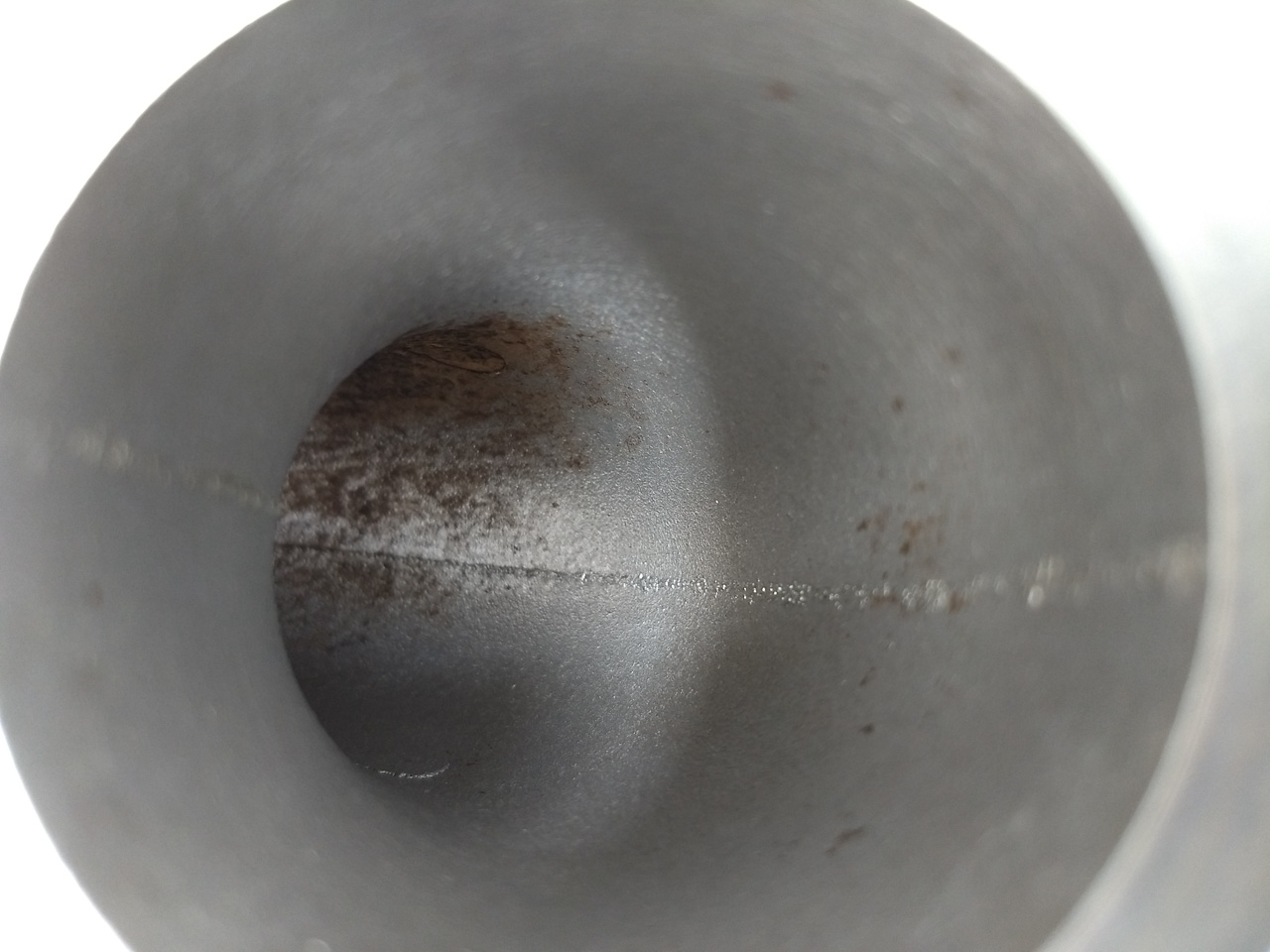 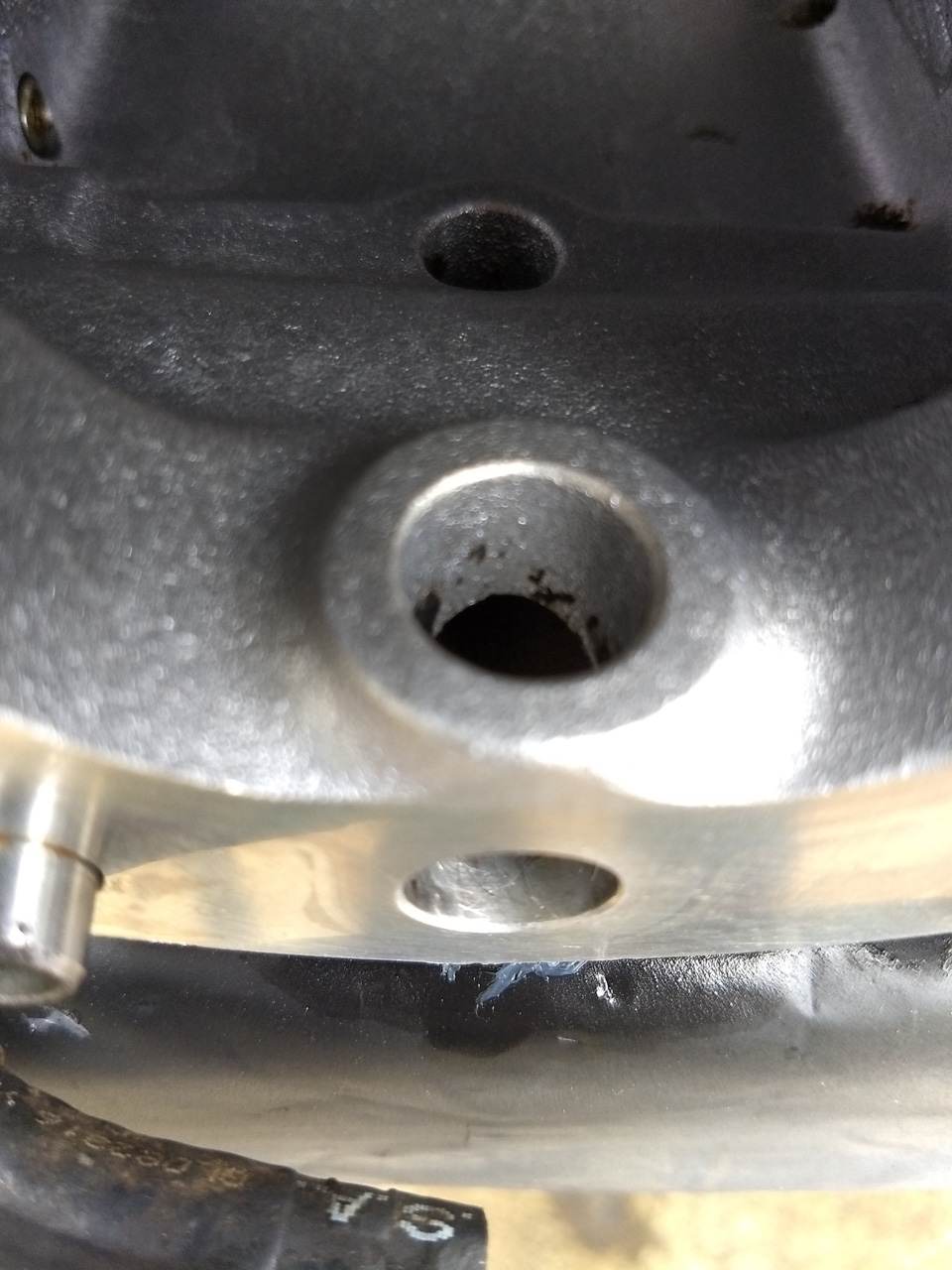 Nearly all the carbon and gunk was cleared, with no detectable damage to the aluminum.

bhsdriller said:
I think the issue at least what I've heard is getting it wet with simple green then letting it dry without rinsing
Click to expand...


I think that's exactly what the issue is, but it's become "Simple Green will dissolve your aluminum parts".

I did the exact same thing one gallon simple and hot water agitated with a fish tank oxygen pump soaked for multiple hours and scrubbed intermittently like you anc had zero issues. It’s a myth
97 Collectors edition 3x locked 259k

I've had problems in the past using caustic degreasers causing corrosion on cast aluminium parts.
If it's too caustic, a cleaner can strip the natural protective oxide layer off aluminium. Once that happens, corrosion occurs rapidly.
Caustic cleaners also contain salts which increases the problem.
Looks like Simple Green is just within the safe pH range for most aluminum, but that range varies for different grades of aluminium. If day use with caution.
If you're seeing a change in the surface, you've probably partially stripped the oxide layer.


What is the Relationship Between Aluminum Oxidation & Corrosion Resistance?​

This surface film is generally stable in a pH range of about 4.5 to 8. The film can stay stable in other cases depending on the environment, for example, nitric acid at pH 0, glacial acetic acid at pH3, or ammonium hydroxide at pH 13. The oxide film can be dissolved in most strong acids and bases, in which case the corrosion of the aluminum will be rapid.
'90 HDJ81 (JDM) 1HD-T, with ct26 supra hybrid turbo Gone :-(
'02 HZJ105 - 2" lift, 35's, 3x locked HD-FTE turbo on HZJ105 project
'93 FZJ80, H151 5speed, mild mannered Daily Driver Aussie-93-fzj80 Base-lining

Okay, so what’s the pH of Simple Green, what’s self-healing, and how can one restore the oxide layer if damaged? 🤔
--
1995 FZJ80
Ongoing project

jaymar said:
Okay, so what’s the pH of Simple Green, what’s self-healing, and how can one restore the oxide layer if damaged? 🤔
Click to expand...


Simple Green data sheet I found shows pH of 8 ( I didn't search the entire product range, YMMV) which is getting toward caustic/alkaline, and at the upper end of what aluminum will tolerate.
IME, cast aluminium is more vulnerable.

You can't repair the natural oxide layer. It happens when aluminum comes through the mill, or when it's cast.
Damage it, it will re-oxidise in its own time which will vary depending on conditions, contamination etc.

Simple Green damages aluminum parts, it's not a myth. It just damaged your parts lightly enough that they are still acceptable to your needs and don't violate the quality requirements of the vehicle. Damage doesn't necessarily mean Catastrophic.
Like gallium on aluminum...https://www.youtube.com/watch?v=z4TVnbuy4Lw
Simple Green makes an Aircraft Grade just for aluminum. The standard stuff is not approved for aluminum, especially aluminum skinned aircraft. Thin sheets, riveted together, creating micro pockets of space for a caustic to sit and soak over time, over multiple washings, over multiple years, slowly eating the aluminum around the rivet...you get the idea.

While the naturally occuring oxide layer helps with corrosion resistance, it's not near as durable as an applied Anodized layer as its only a couple molecules thick and can be easily scraped off or scratched through.
Most decorative anodizing is the coloured or clear hard coat on commercial parts. It's a few tenths (.0002-.0005" (.002mm) ) thick.
For high resistance to corrosion MIL Type 3, Class 2 is used, which is around .001-.002" (0.02-0.05mm) thick and its naturally a dark grey or smutty black. It's thick enough that threads and reamed holes have special tolerance grades applied during manufacturing so mating parts will function after the growth of the anodize layer.
'97 LX450
3X-locked/ARB and Nitro 4.88 gears. Witt's End: York OBA. WKOR 10 deg Sliders. ICON/Delta VS:Stage 1, 3" lift, radius arms, rear panhard lift bracket & front sway-bar extensions. Man A Fre:Rear sway-bar extensions. GIS:DIY skid plate. Tires:Wild Peak AT/3W 285/75 16R. DIY:CDL & pin 7 mod. Front bumper w/ Badlands 12K Winch, 2" rear bump stops, armored LCA's, A pillar handles.

as per the manufacture simple green has a ph of 8.5-9.2, page 2 of the sds https://cdn.simplegreen.com/downloads/SDS_EN-US_SimpleGreenAllPurposeCleaner.pdf
94 red fzj 80, sold with visitation rights
04 corolla, dd
97 honda xr400, 12 husqvarna txc310
You must log in or register to reply here.

Is it safe to drive with locker actuators removed?

Question: How to Remove Sunroof Sunshade

Is my shaft about to explode

D
Last dang bolt to remove the running board brackets!!!!