Hey y'all, new poster here, but long time lurker. This website is a treasure trove of knowledge and I used it extensively in planning for my build, so thank you to all that came before me and answered questions and shared builds.

My build is a 1970 FJ40 with a Tahoe 5.3 and a mini truck PS box . From driving into my buddy's garage with a Chevy 283, to driving out with an EFI 5.3 took just 12 days. Pretty proud of the result and very happy with the power, reliability, and fuel efficiency!


Now, less than 4 weeks from the start of our build, my wife and I are 1,000 miles into a 12,000 mile road trip towing an A frame camper. Thanks for all the help to this point; my wife and I are excited to be a part of the club and hope to share some trip progress as we travel around the states. 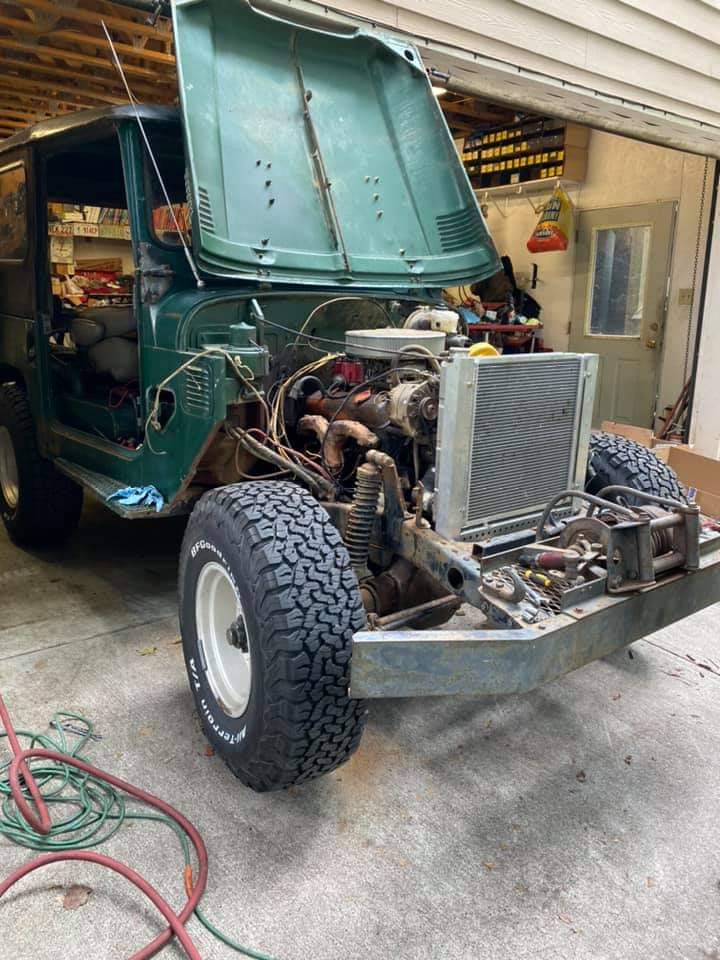 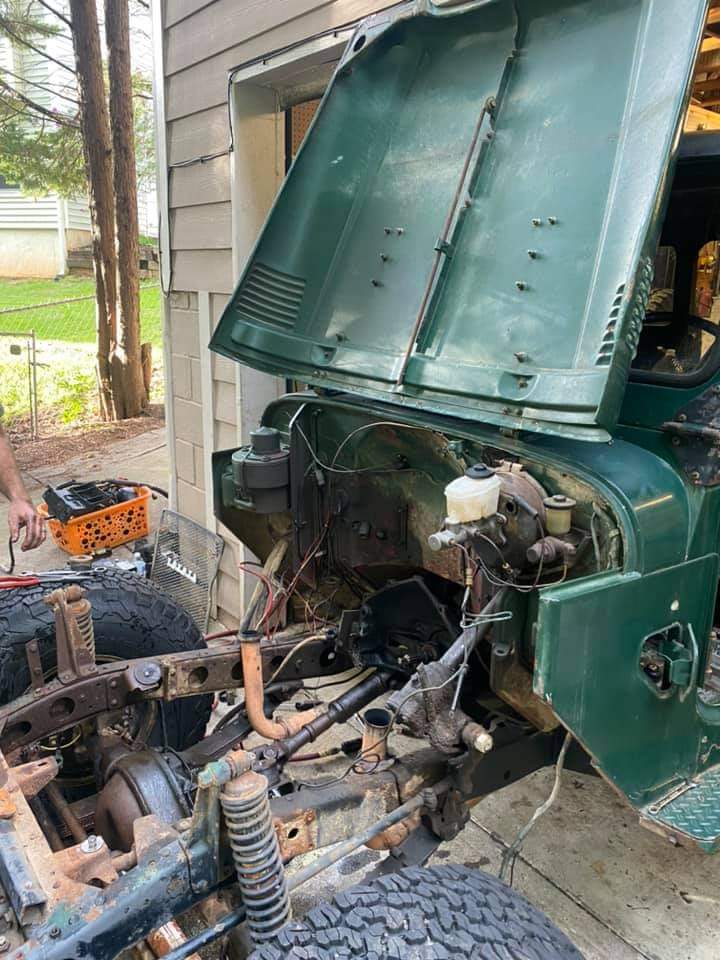 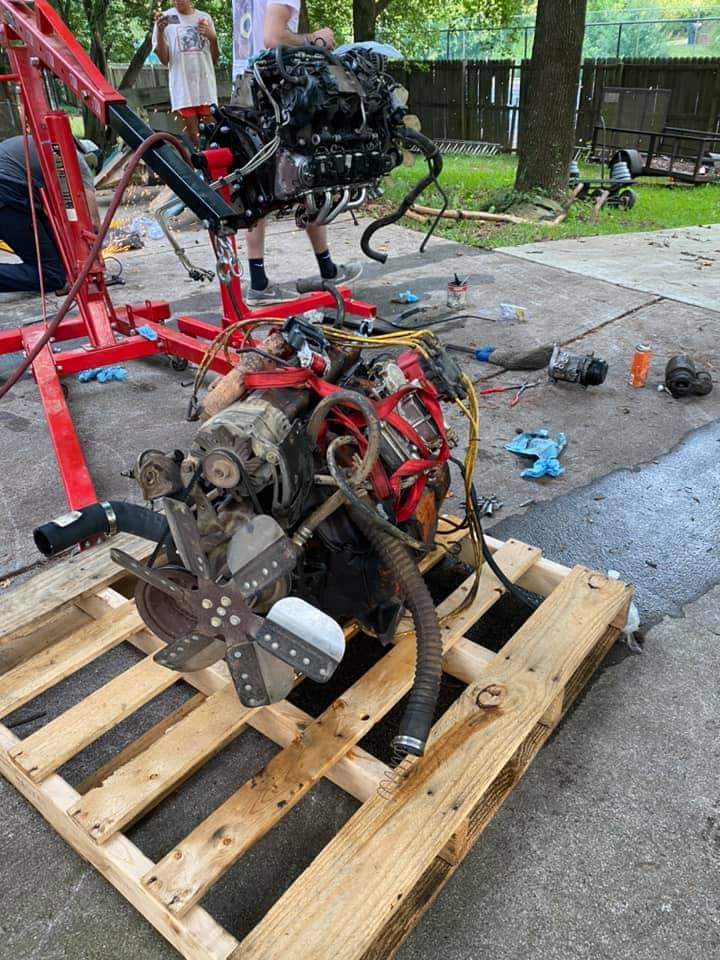 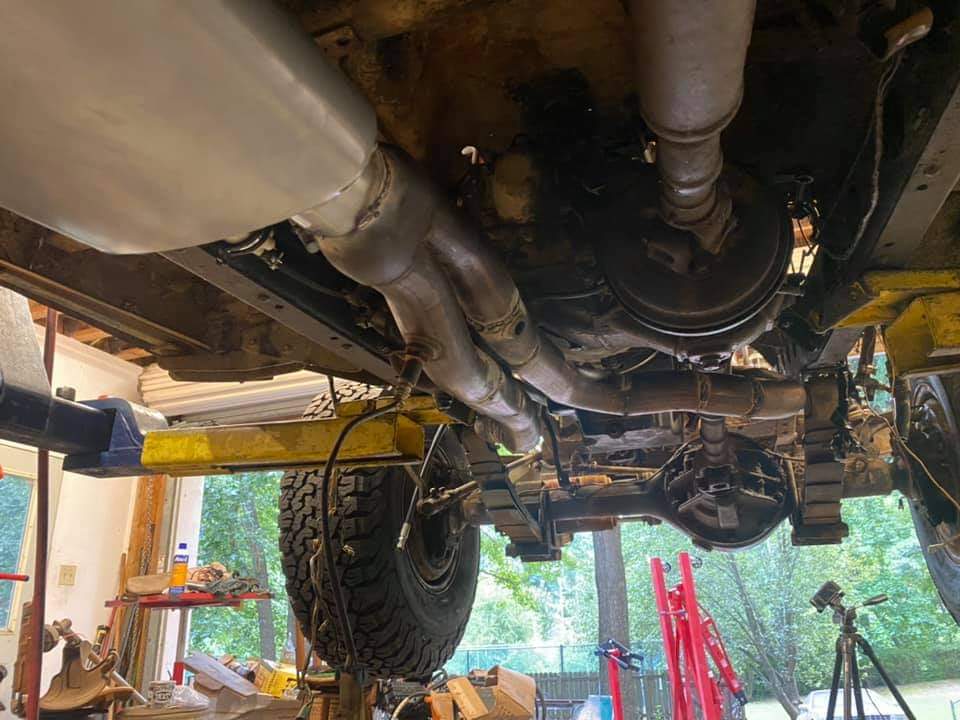 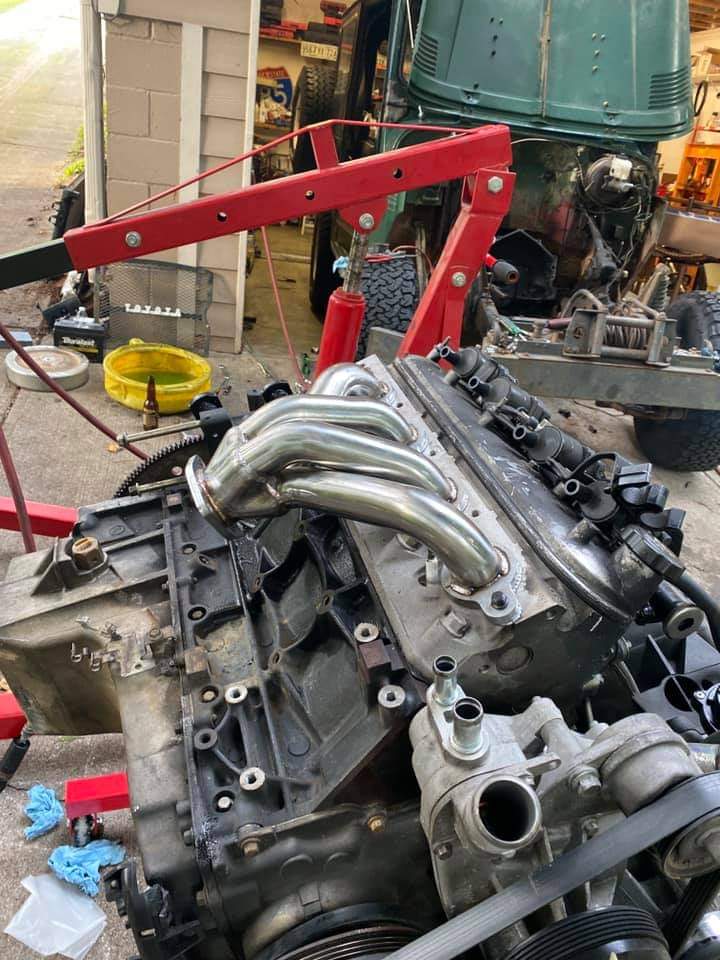 Just as the good Lord intended, we finished the build at 3AM and had to drive it to the gas station, wiring organization be damned. As much as I wanted to leave the ECU hanging onto the fender for dear life, I did go back and clean up the harness and strap the EcU to the inner fender, as well as finalize an intake pipe/air filter arrangment. 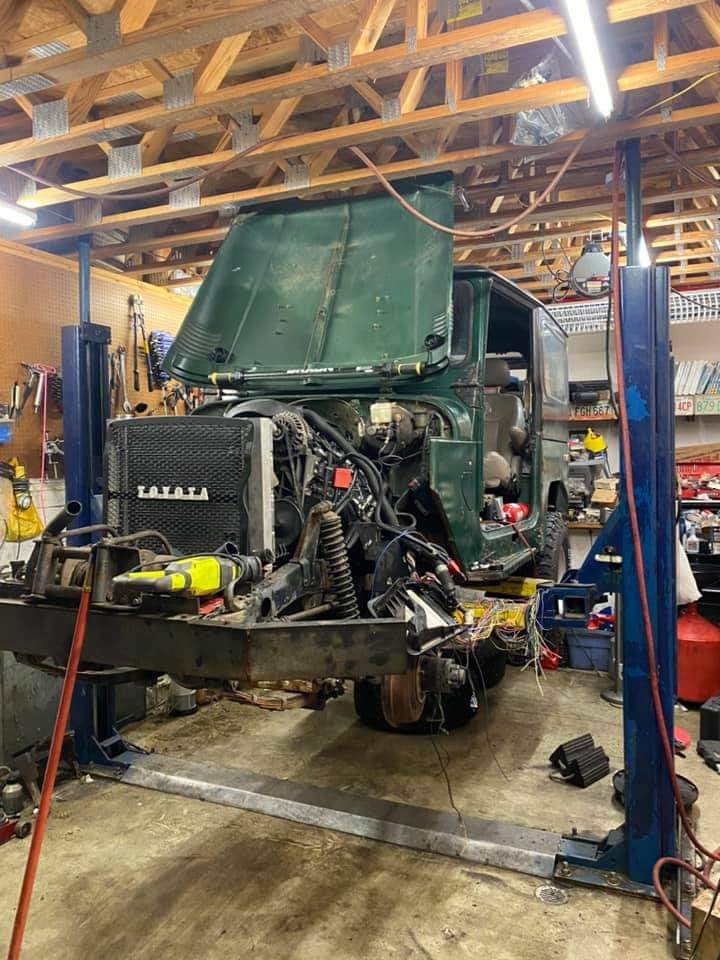 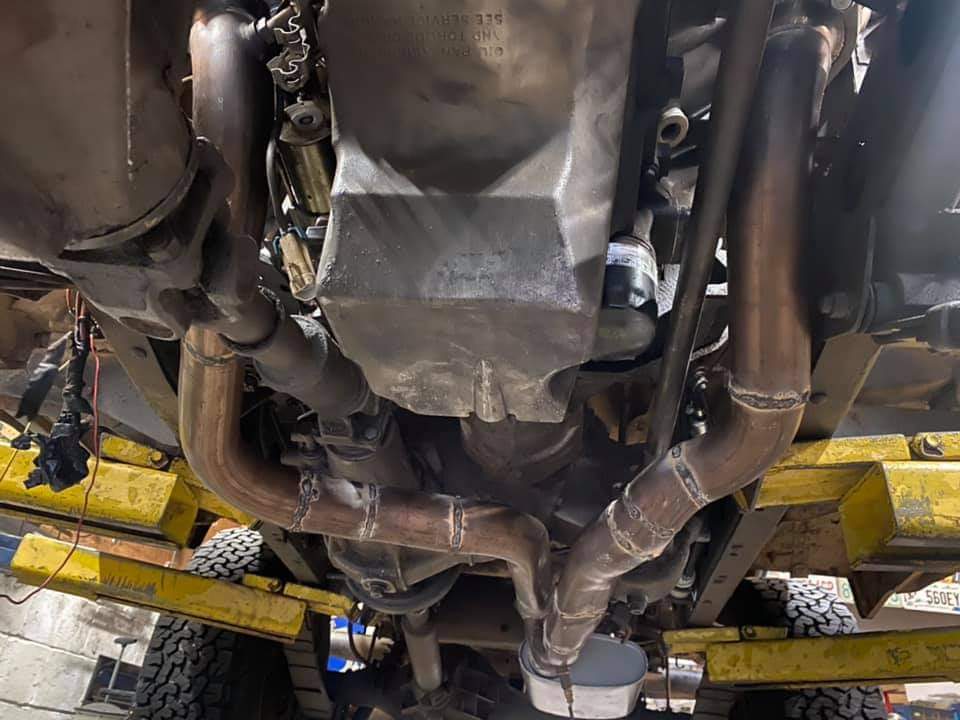 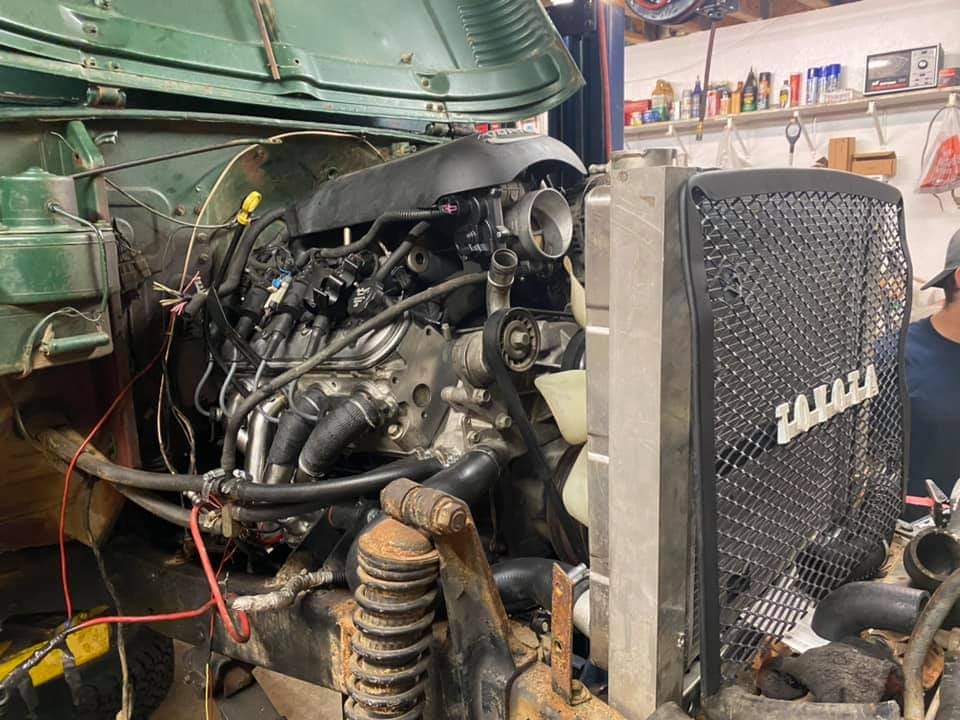 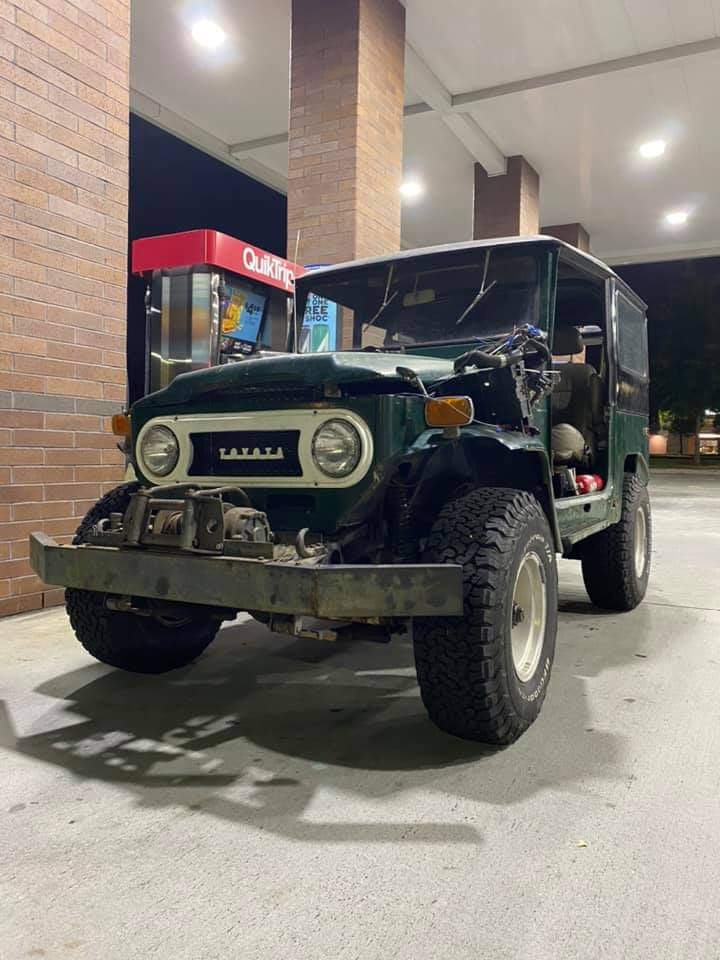 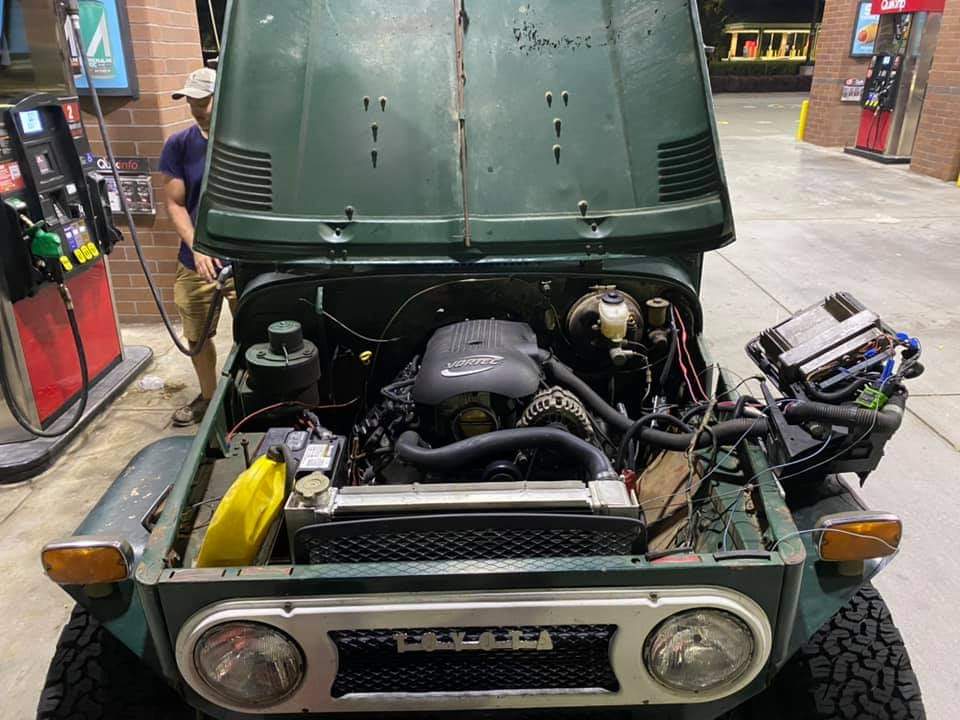 And this is where she sits. 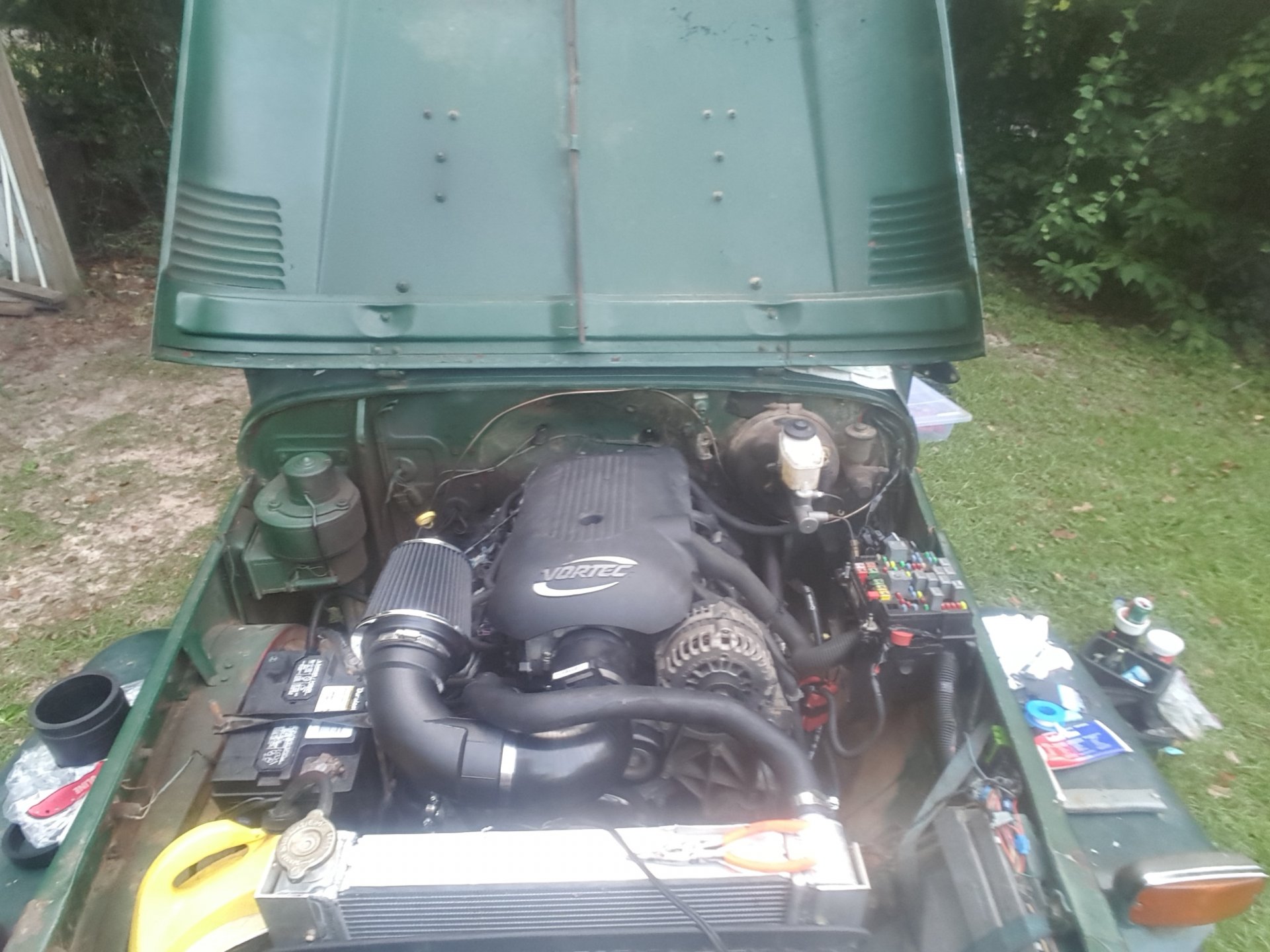 What motor mounts did you use?

Awesome. That's an impressive swap in 12 days...and amazing that you are already into a 12,000 mile journey with it! Congrats!

Pics of the road trip

Good seeing you this afternoon. Would’ve given you more compliments had I known your mechanical prowess

What’s your trip route?
B

4G63t said:
What motor mounts did you use?
Click to expand...

Some cheap Ebay ones, which I welded to the frame, and after doing some climbing in the Baja Motorized area in the Badlands, SD I regret not reinforcing them more. Live and ya learn, I guess. I will be welding in some supports with some rod that I bought and stringing together my 3 12v batteries. I need to get the setup together anyway to repair another, similarly related item.
B

Here are a couple. Will have a ton by the end of it. Just getting to the really pretty stuff out west. 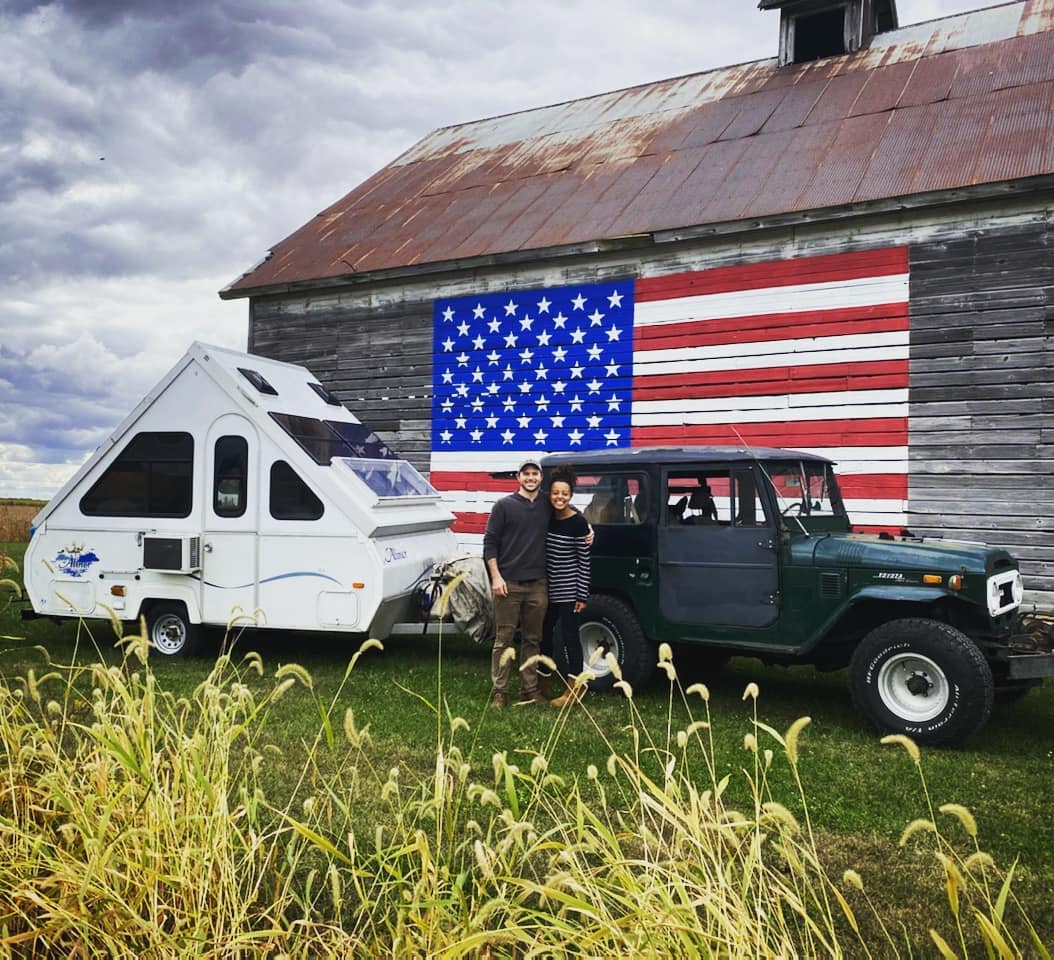 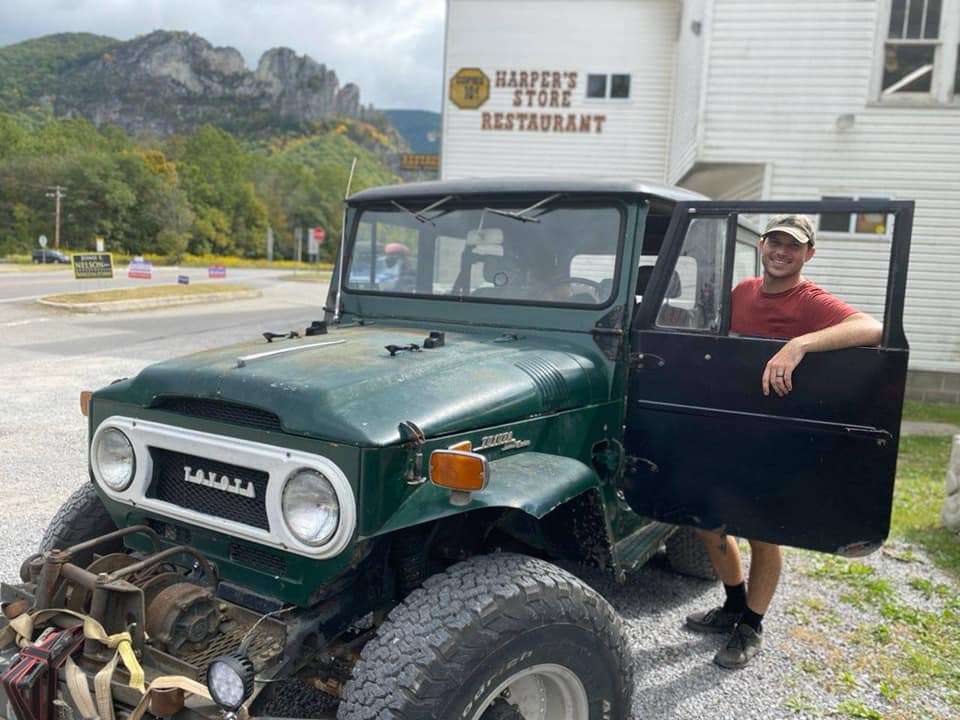 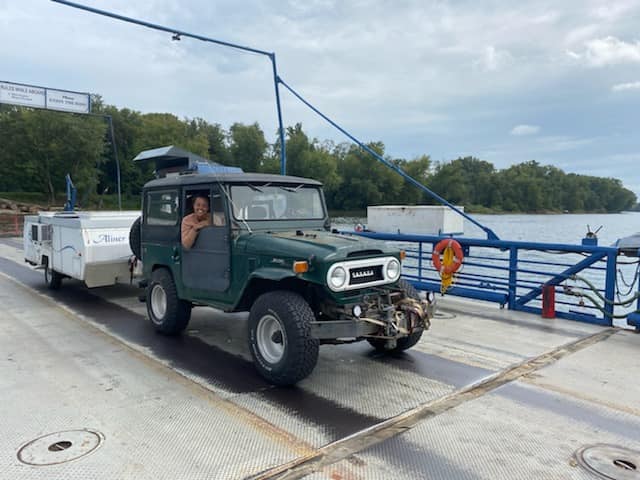 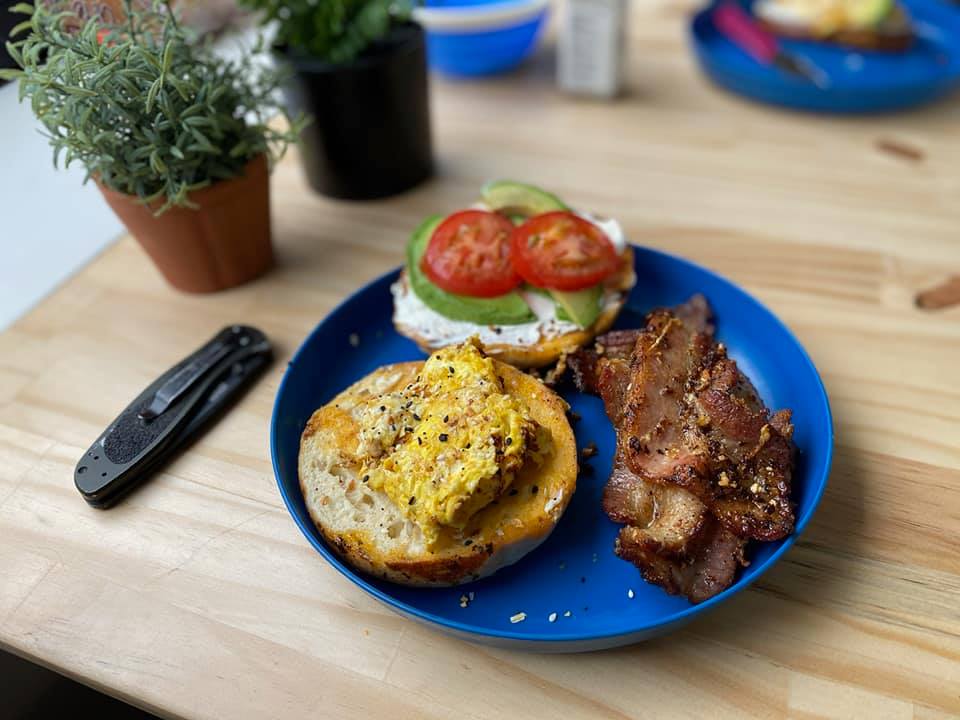 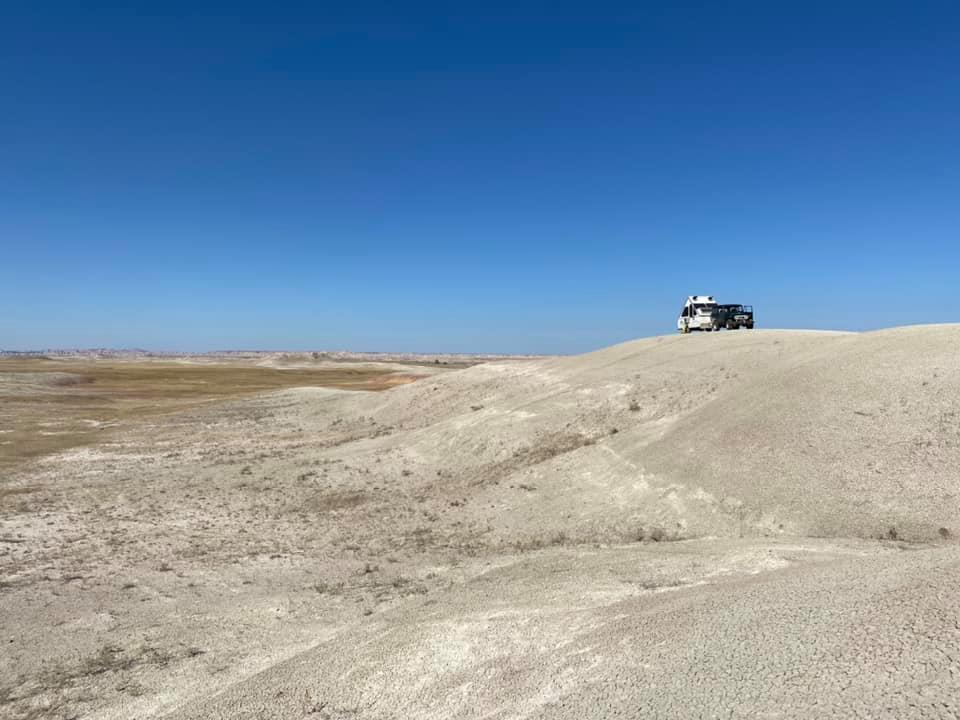 D21FJ60 said:
Good seeing you this afternoon. Would’ve given you more compliments had I known your mechanical prowess

Aww schucks, I'm just a student and practitioner of on the fly, git-r-dun engineering, whether it be mechanical or computer based problems, of which there were many. Nice running into a fellow LC owner!

Welcome from Central Georgia, congratulations on the swap, and I’m jealous of your cross country road trip! I’ll be following along for sure. I was talking to a buddy of mine a couple days ago about doing the same thing as soon as I get mine road ready.

So how does the LS 40 do pulling a trailer? People often ask this question and usually they are steered away from the idea, due to the general dimensions of the truck. Obviously you had the power, but did it feel overwhelmed steering wise?
B

southern son said:
Welcome from Central Georgia, congratulations on the swap, and I’m jealous of your cross country road trip! I’ll be following along for sure. I was talking to a buddy of mine a couple days ago about doing the same thing as soon as I get mine road ready.
Click to expand...

Howdy from the north side! You definitely should. Its quite an adventure to say the least. Bring more tools than you think you'll need! lol
B

archie73 said:
So how does the LS 40 do pulling a trailer? People often ask this question and usually they are steered away from the idea, due to the general dimensions of the truck. Obviously you had the power, but did it feel overwhelmed steering wise?
Click to expand...

Good question. We selected the camper for its relatively light weight, but once initially loaded, I had the weight distributed all wrong. The FJ doors were wrapped up on the nose of the trailer, along with a big floor jack. I hit the highway on the first day out of Atlanta, having pulled it empty at 70+ with the 283, I thought surely I'll have no problem at the same speed with the LS. Boy was I wrong. The first downhill section on 400 caused a 3 lane wide fish tail that was harrowing for my wife and me to say the least. At that point we just stuck to under 60 and back roads all the way to the panhandle in FL and then again across, over to Savannah and Tybee Island. We were so excited to get going on the initial legs of the trip that we just threw everything in and on the camper and hit the road.

I aired the tires up to 38, strapped the floor jack to the front of the truck, and once we put the doors on, during hurricane rain up the coast (that was a fun day), the whole rig was much better balanced and we have had no problems since. I keep it at 55 as much as possible, with the 3 speed it gets about 16-18 MPG towing @ 2200rpm if I do my part staying out of the throttle. I am in love with the LS powerband, but oh how I wish I had gone 4 or 5 speed, alas time was the limiting factor. At 65 it gets more like 13 MPG, so its prudent for our fuel budget to chill on back roads, plus the scenery is better!

The brakes still leave a little something to be desired, but it has all new wheel cylinders in the front and is fine for the speeds we maintain. There is no way I would pull anything taller or heavier, but this setup is about perfect for our needs.
B

Ocho77 said:
Awesome. That's an impressive swap in 12 days...and amazing that you are already into a 12,000 mile journey with it! Congrats!
Click to expand...

Thanks man, during the planning phases I originally budgeted 4 days(I vastly over estimated myself) for the build and on day 2 we were looking good. We had the 283 out and the frame prepped for the new block by the end of day 1. Day 2 saw the initial mock up of the engine. The trans shaft slipped right into the clutch and the bell housing lined up so we had it bolted, but still suspended on the lift in no time. I made cardboard templates to design the motor mounts, cut the steel to shape and had the engine completely mounted by night 2.

The Y pipe took a full day to fab, having never built one before, and using only a Tahoe Y- pipe, an angle grinder, and a little mig. Surprisingly enough I used every inch of the old Y pipe, just in an entirely different configuration, to route around the PTO and front driveshafts, and route neatly through the space in the transfer case. Getting the collector in a place to meet up with the 2 header pipes was a frustrating and precise ordeal, but I am very happy with the finished product.

The support systems obviously ended up being the most tedious. To use the P/S pump from the LS we had a local CAT shop make us a hydraulic line to mate with the Mini Truck box. I had to pin and weld a U joint to the input of the gear box to then mate with the shortened steering shaft. I cut up a polyurethane bushing to fit between the now modified steering shaft and column for smooth steering inputs and no wiggle of the shaft in the column.

The fuel system uses an MSD inline pump, a 100 micron pre-pump filter and a 10 micron post-pump filter routed using a return style system on the original Tahoe rail. The pump is wired directly to the Tahoe fuse box, so that it primes on key turn and is controlled by the PCM.

The wiring was fun. It took a bunch of research to determine what of the Tahoe harness I needed to keep and which to trash. Eventually I will go back and make my own fuse box to further neaten up the engine bay, but with the time alotted and the fact I pulled the whole harness from the Tahoe, I just used the fuse box and a bunch of wiring diagrams to figure out what needed to go where.

I maintained the drive by wire system of the Tahoe, so the gas pedal assembly is from the Tahoe, along with a Throttle module mounted on the fender near the firewall.

Once I had it all wired, it would start, but not run. Obviously the VATS(Vehicle anti theft system) was to blame and this is where I moved to the laptop. I am using a bluetooth OBD LINkX dongle to read and write the PCM, run my diagnostics, and read my digital gauges, all from my phone on the dash or laptop. For PC software I used PCMHammer, a freeware reading and writing software and TunerPro to decipher the binary of the PCM and modify settings. Once I disabled the VATS, deleted the rear O2s, and reuploaded the tune, it started up and idled but would not rev over 1500. This was at midnight, and the neighbors were sure to make their displeasure known.

The Tunerpro program is phenomenal and vast in its abilities. After pouring over hundreds of settings I determined the safety parameters were preventing the engine from going over 1500, because the ECU was looking for input from an auto transmission that didn't exist. I found they were all set to limit the revs to 1500, so I took every one and moved it to 6500. PAY DIRT.

With the 2.5" header pipes, to a 3" collector, 1 2 chamber muffler, and a 4" tip, the damn thing revs like a corvette. And yeah that's when we strapped the ECU to the fender and ripped out of the driveway at 3AM...

The total time was 12 days, but only 8 working days. Huge thanks to my buddy for letting me use his garage with a lift for the build. I definitely owe much of the speed of the build to the fact that I had access to a fantastic home shop and a buddy with a heart of gold that stuck it out with me for multiple 14 hours days.
Last edited: Oct 10, 2020
B

Here are some more pictures of our setup. My wife stepped on something in the Missouri River (we think, there's no obvious puncture or wound to speak of) and has an infection that has us in the hospital for a couple days, hence the time for me to sit down and write this all out. Sorry if I'm long winded, hopefully the pictures make up for the blocks of text


For the dogs to be comfortable while riding, and to provide more usable storage, we built up a platform across the rear tub with marine grade plywood and marine carpet, topped with a 4" foam mattress and a sheet. Under the platform we have a tub of spare stuff, along with a 12v compressor, road flares, extra straps, etc.

The interior of the truck is clearly a 50 year old farm truck, albeit with some captains chairs I snagged from a Caravan for $40. They were like new when I got them, but a summer of top off driving took its toll on the material. Oh well, they're still comfy and have arm rests. 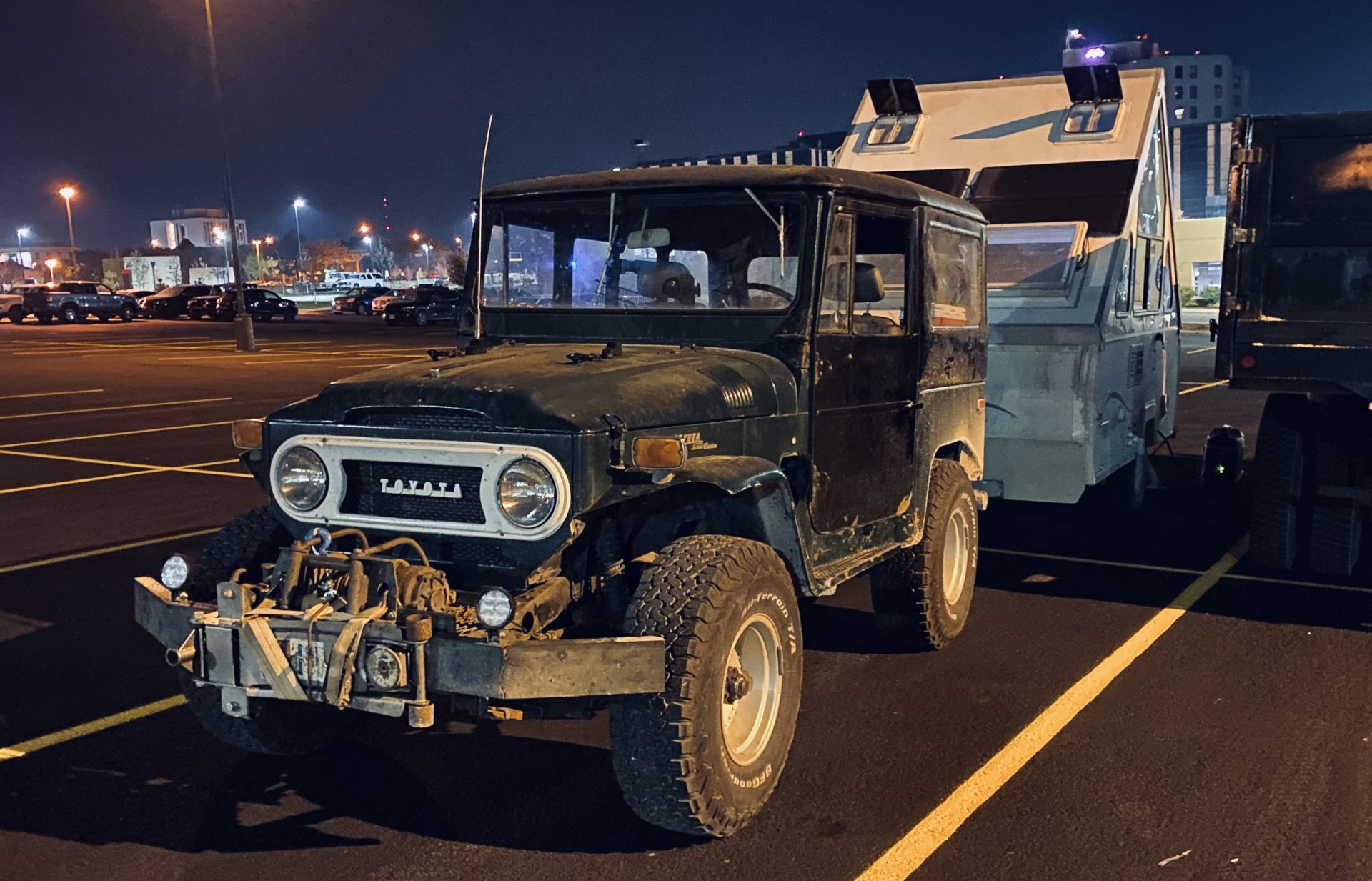 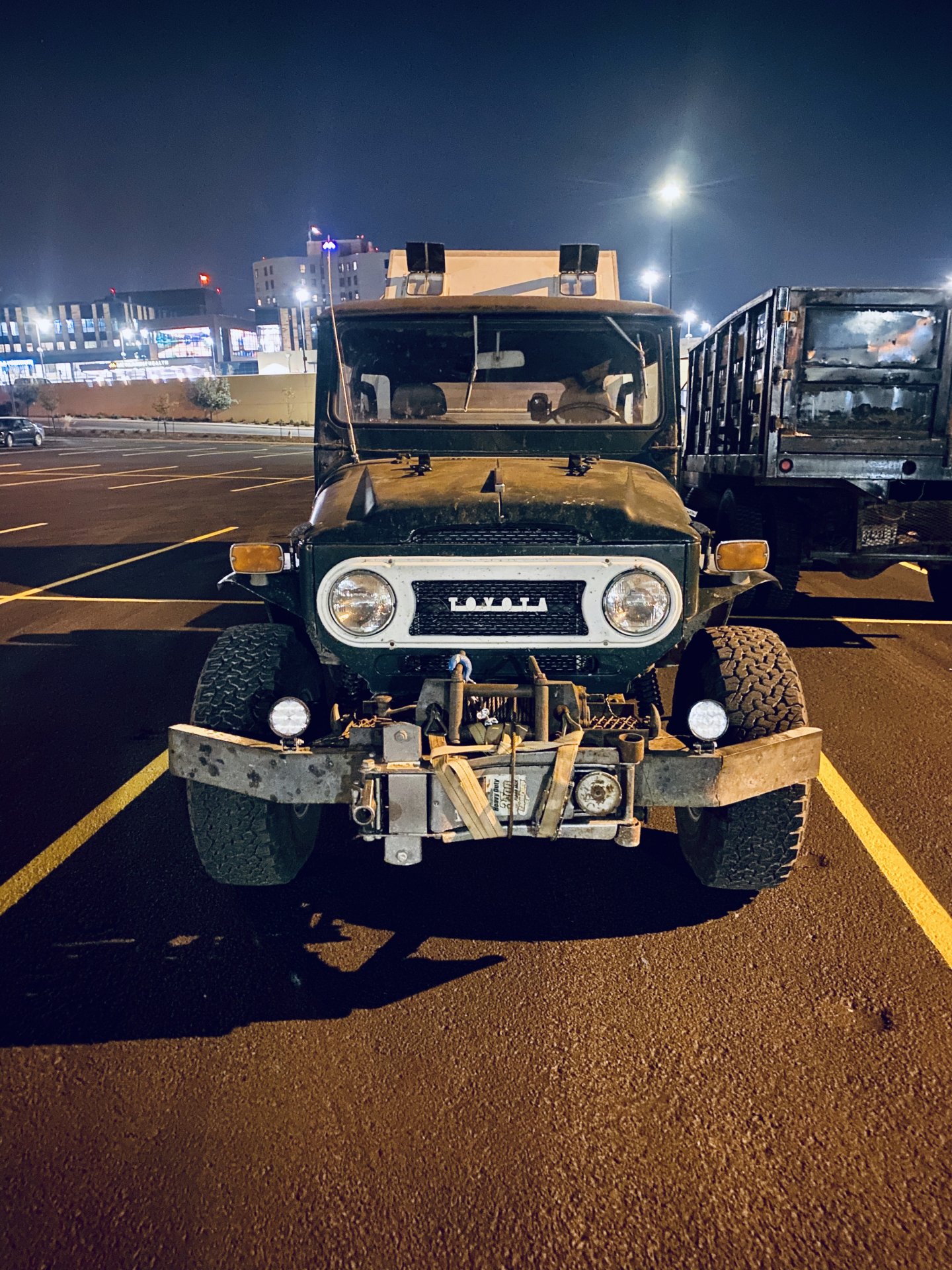 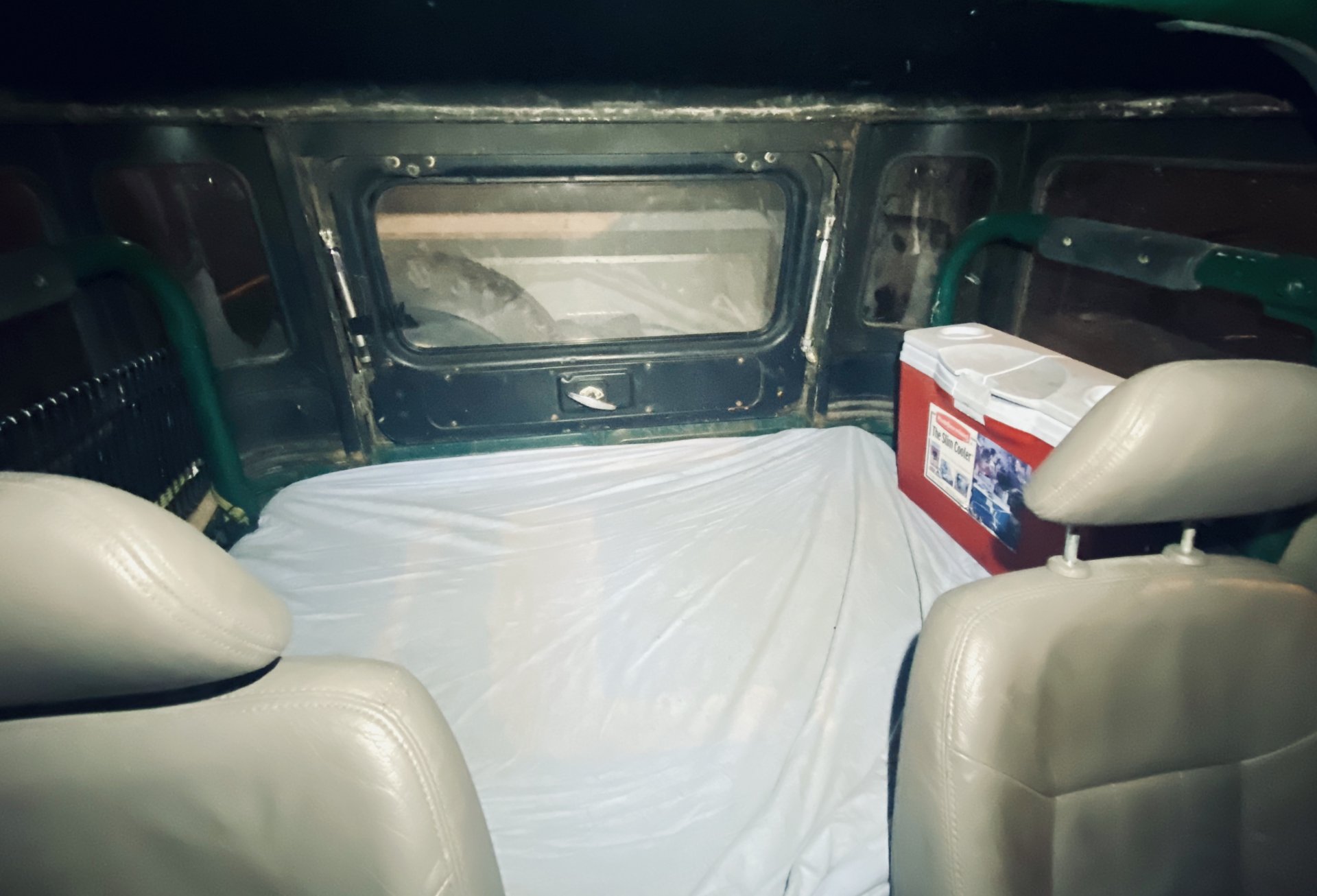 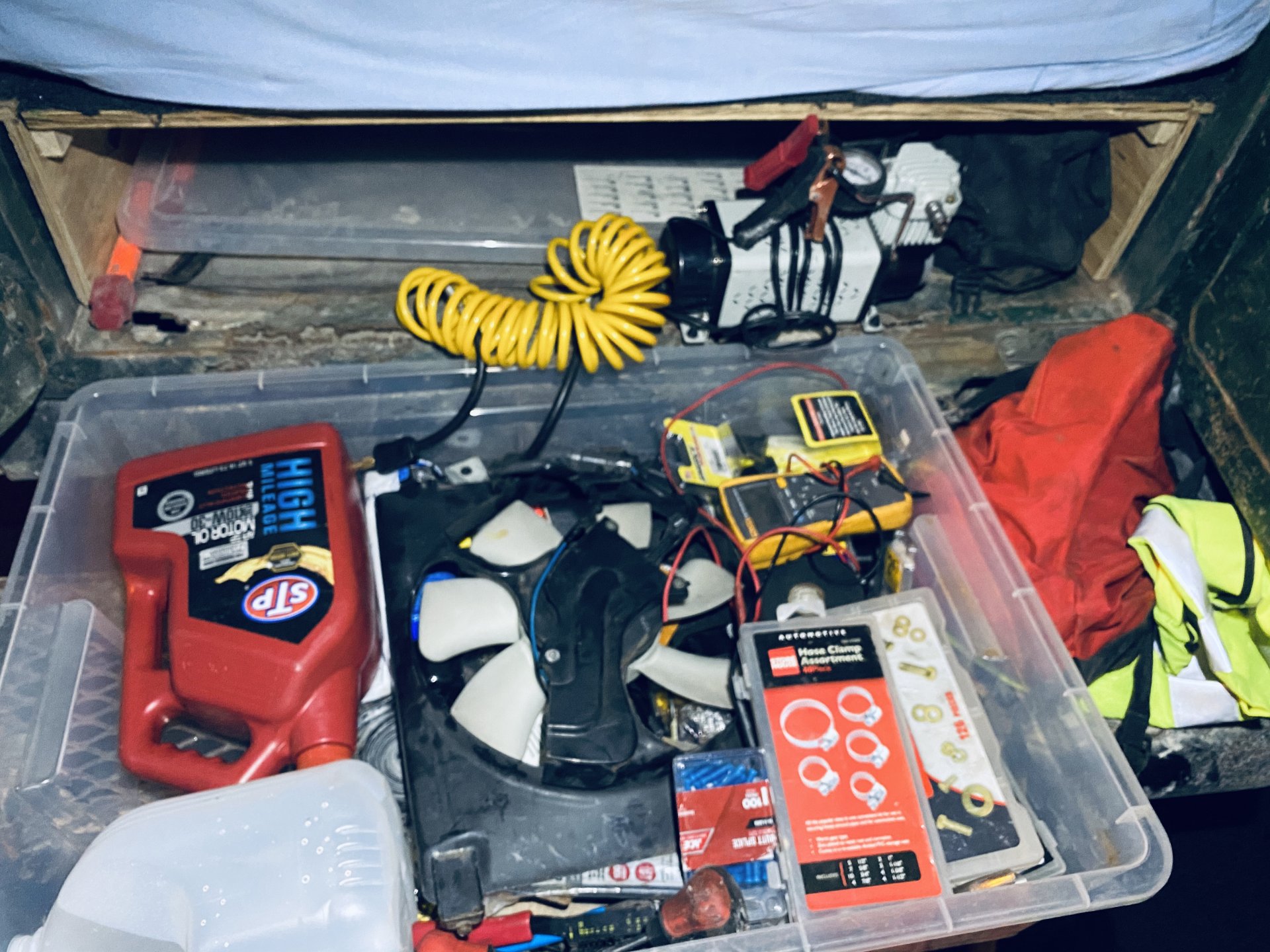 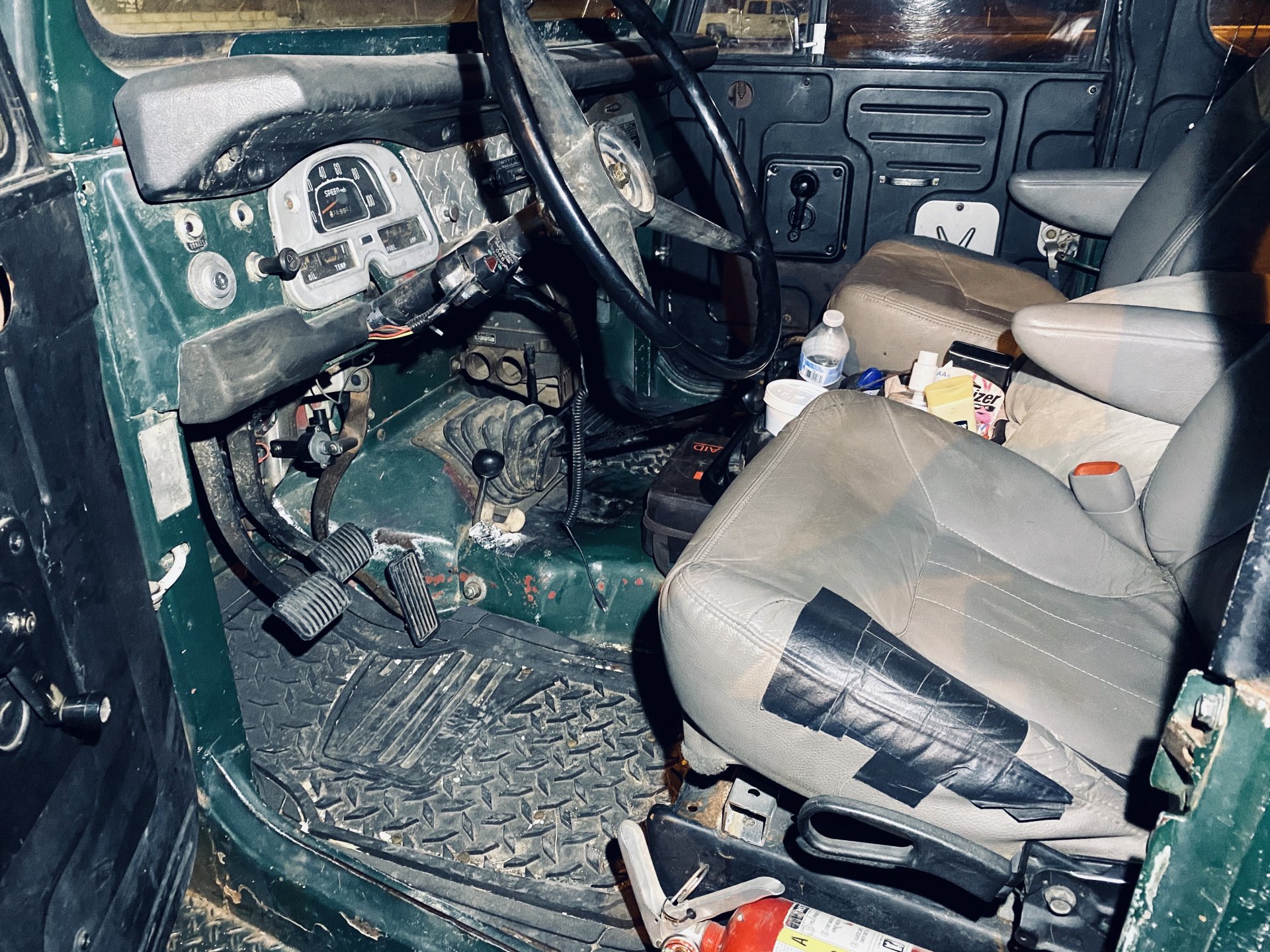 Yesterday at 9:40 AM
Living in the Past

Yesterday at 8:47 AM
Hugh Heifer