After a little over a month of browsing for solution here and other forums, troubleshooting and throwing some parts at it I had to create a post to get new set of eyes and ideas on my issue.

About a month ago my 1999 LC has been showing the ABS light when only when I turn (low speed ~10-15mph) and disable ABS for the rest of the drive. Upon restarting the vehicle the light goes away until said conditions are met again.

My 1st thought was: Wheel speed sensor dirty or bad, loose wiring of some sort. I have ohm all sensor and were within spec (1.7k if I recall) still doubting and the sensor kit being available and not that expensive I install 4 new sensors, same issue. When removing the sensor the front driver one was a little dirty, but the new one is still clean after 1 week.

For testing I when to a gravel area where I could slam the break and make the ABS system trigger and see if it would fail and light up. The ABS just did it's job, no issues, no noise. After doing circles to trigger the light then testing the ABS breaking in the gravel, ABS does not come on. So when turning and having the ABS light come on, it only disables the ABS, nothing else brake related.

Pedal feels the same as the past 35k miles.

I have a spare master cylinder unit with repair kit, that will be my next variable to attack.

Another note, I've developed the "2-3k rpm jerk" not sure if there's a correct term for that one, when the fuel pump starts failing, those 2 issues (fuel pump and ABS light) have starting happening at the same time. I also have a full fuel pump unit on it's way and should be on the list after the master cylinder.

If any of you had that issue, or you have any other ideas on what it could be, please let me know.

Really, with the master cylinder it's more the ABS module attach to it I'm trying to replace. I know there is another ABS module under the dash, but I don't know how those can fail and what the symptoms are.

Well, that was it. I'll keep this updated as I eliminate or find the source of the problem.

Wouldn't an ECU issue be permanent ?

I had a similar issue year ago. My left front sensor was intermittently throwing a code.
I tried to replace the sensor and broke it trying to remove it, took the wheel off to do a full repack, replace seals and surprise. The seal behind the knuckle let mud in and the surface where the sensor reads was caked in mud.
I would check that first at it threw codes exactly as you describe with yours, low speeds, turning and intermittent.
The gap between teeth's where full off mud 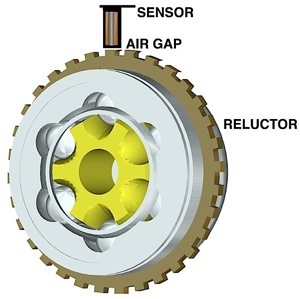 I'll definitely look that up. Thanks for the idea.
You must log in or register to reply here.

ABS Dash Light is On