Just finished the installation of a new window lift motor and regulator, left rear door, FZJ80. The entire process has been posted up in the past so just hitting a few high points FWIW

It's not super difficult and there's a lot of words that most people may not want to read (you might once you dig into this job ). Just sharing a few tips I ran across while doing this job. I'll add some photos.

Removal of the door panel is fairly straighforward, key point is to ensure all the plastic rivets are removed. Don't tug gorrila style on the door card to remove it, otherwise you may cause damage to the door panel which is (now) 25 year old, often water damaged, masonite (pressed wood and glue) along with plastic parts attached. Use a proper auto upholstery tool to pop the rivets out and take your time, IMHO.

To replace the regulator or window lift motor IMHO they both should be removed together, some people apparently have just replaced the motor in place but in that situation you aren't able to fully inspect/clean/lube the regulator. FWIW

Best to have the window glass in the full up position before you start if possible.

Use a good tape to hold the glass up before you remove the regulator, run a few strips up over and down both sides of the glass. I used Gorilla clear tape and left it on awhile (days) in the hot sun so getting the adhesive off the glass was a real pain. I just didn't want to drop the glass, but maybe
painter's tape would have worked just as well (as long as it doesn't rain, but it did).

There are four short 10mm bolts (90080-11224) that need to be removed after disconnecting the power harness to the motor. The vapor barrier does not have to come completely off to remove those bolts, I cut a small slit in the plastic above each bolt and removed the bolts through that hole. When you put it back together you can patch those small holes with clear vinyl tape. The rear section of the vapor barrier does need to be peeled open to get access to the regulator and motor. Extra Butyl rubber rope can be used to stick the vapor barrier back on, or if there's still enough original butyl rubber remaining something like Gorilla clear vinyl tape can be used to go around the edges.

Once the four bolts are removed the regulator and motor slide out the large access hole.

A new OEM regulator comes with some grease on the regulator plate and the plastic wheel, I added more. The FSM says to use MP grease. I used some OEM body grease (the expensive stuff) along with a touch of a Moly based grease for the motor pinion gear and regulator teeth. Toyota does not use Moly (black) grease IMO possibly because it will make a holy mess if you get it on any interior parts and will never come out of fabrics, carpet, etc, so be careful if you do use a Moly MP grease. I used the OEM Body grease (yellow stuff) for the plastic wheel and lift channel.

If you are installing a new window lift motor you can reuse the original hex lobular screws (90080-14057) which are self tapping if there's already a hole (there is). However I went ahead and tapped the holes (5mm x 0.8mm) at least part way down then (I used) a Low Strength Purple thread locker (personal preference, not required).

Reason I did this is I didn't want the glass to stop moving before it was fully closed, if that makes sense. If there's a more scientific way to do this IDK.

Obviously, there is no regulator spring to worry about for the rear doors.

So before I reinstalled the regulator/motor I first connected the new motor to the power harness, turned the ignition key to ON, then ran the motor through it's full arc a few times (regulator sitting on the rear seat over a clean rag).

Before I installed the regulator/motor assembly I ensured that the glass was still in the full up position (it had sagged since it was first taped up).

Once the assembly was inside the door cavity I slid the plastic wheel into the lift channel (it can hang there a minute IMO if you're gentle and have to reach for a bolt/tool). Then started to install the bolts loosely, front right bolt first then wiggle wiggle wiggle the regulator to line up the other bolt holes and install the remaining bolts loosely one at a time (see photos).


Photo below shows the first bolt (front right) partially hidden by the vapor barrier (click twice and look closely). This first bolt was loosely installed which allowed the regulator to pivot while lining up the other bolt holes: 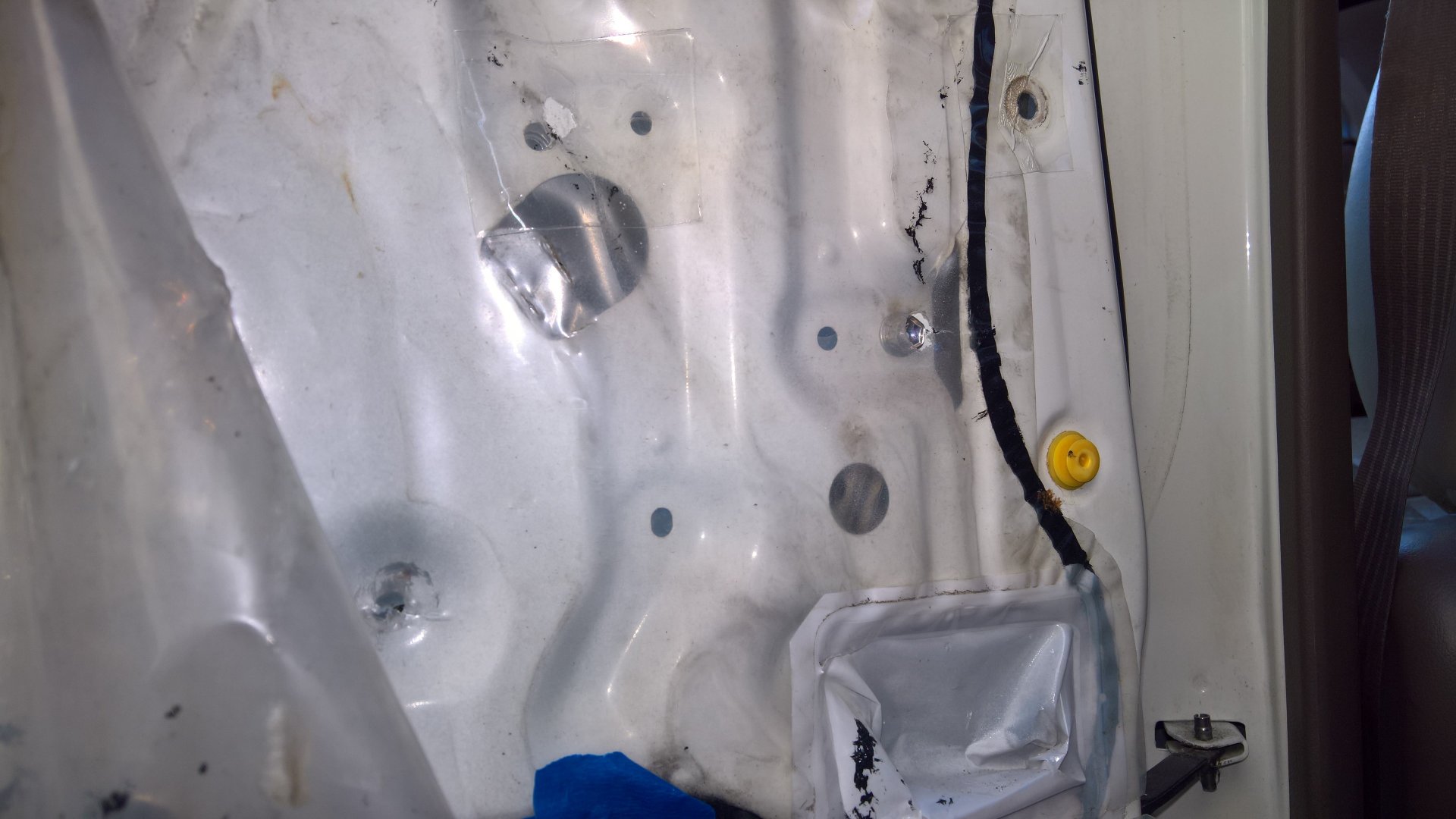 Before fully tightening down the four 10mm bolts I ran the glass up and down a few times to let things settle, then final torquing of the bolts and then final recheck of the glass movement full up and full down. I decided to use new bolts (90080-11224) as the original (attached) lock washers might be a bit weak after 25 years. 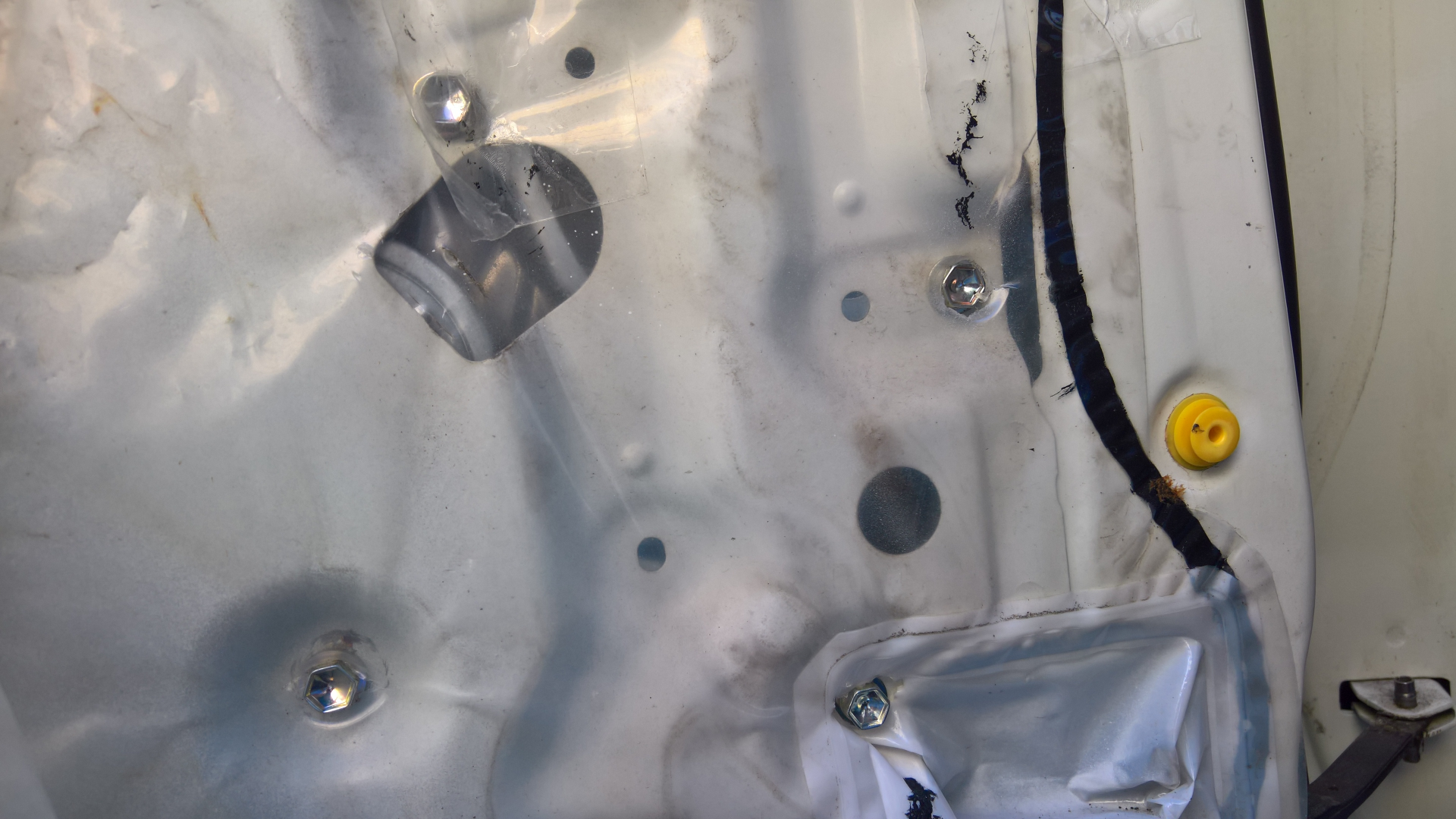 In the photo below note the position of the regulator arm wheel in the lift channel, the photo was taken when the wheel was at it's maximum rearward position in the channel (window glass about half way down).

NOTE: The glass and lift channel were however fully up (out of sight) when the regulator wheel was slid into the channel. This is done by feel mostly. The photo below was taken after the bolts holding the regulator to the door had been installed and tightened down 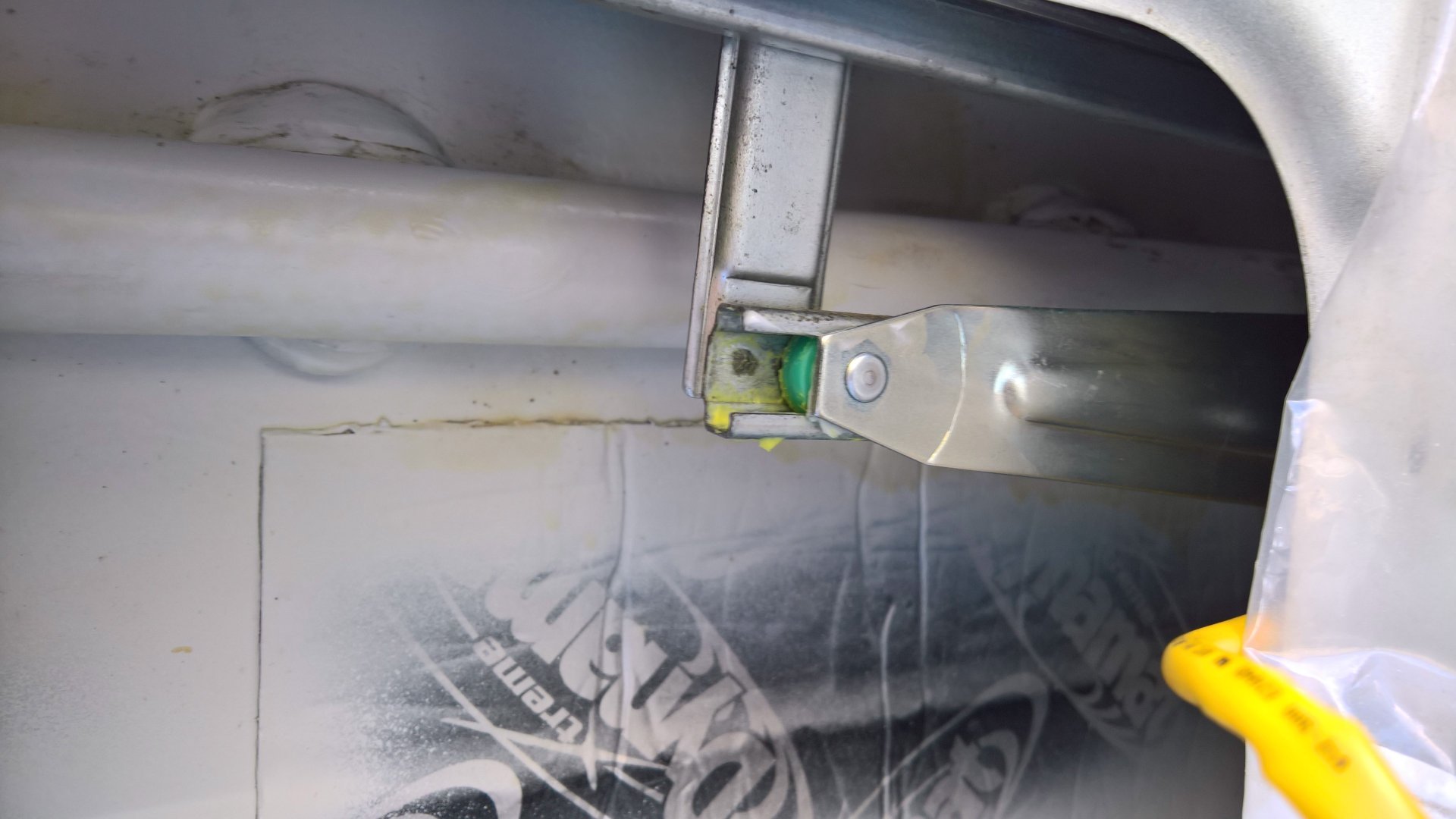 Note that in order to attach the last hex screw (T-25 Torx/star bit) the arm of the regulator must be repositioned by hooking the motor up to the power harness then with the ignition key turned to ON and using the door window switch to move the arm out of the way to install the last screw. The hole in the arm does not line up with any of the screws.

I used Low Strength Purple thread locker on these screws; not required but
FWIW it's the correct thread locker for small fasteners going into aluminum (if you use anything). I use it mostly as a thread sealer to prevent corrosion
in the threads over the next 25 years before it has to come out again. 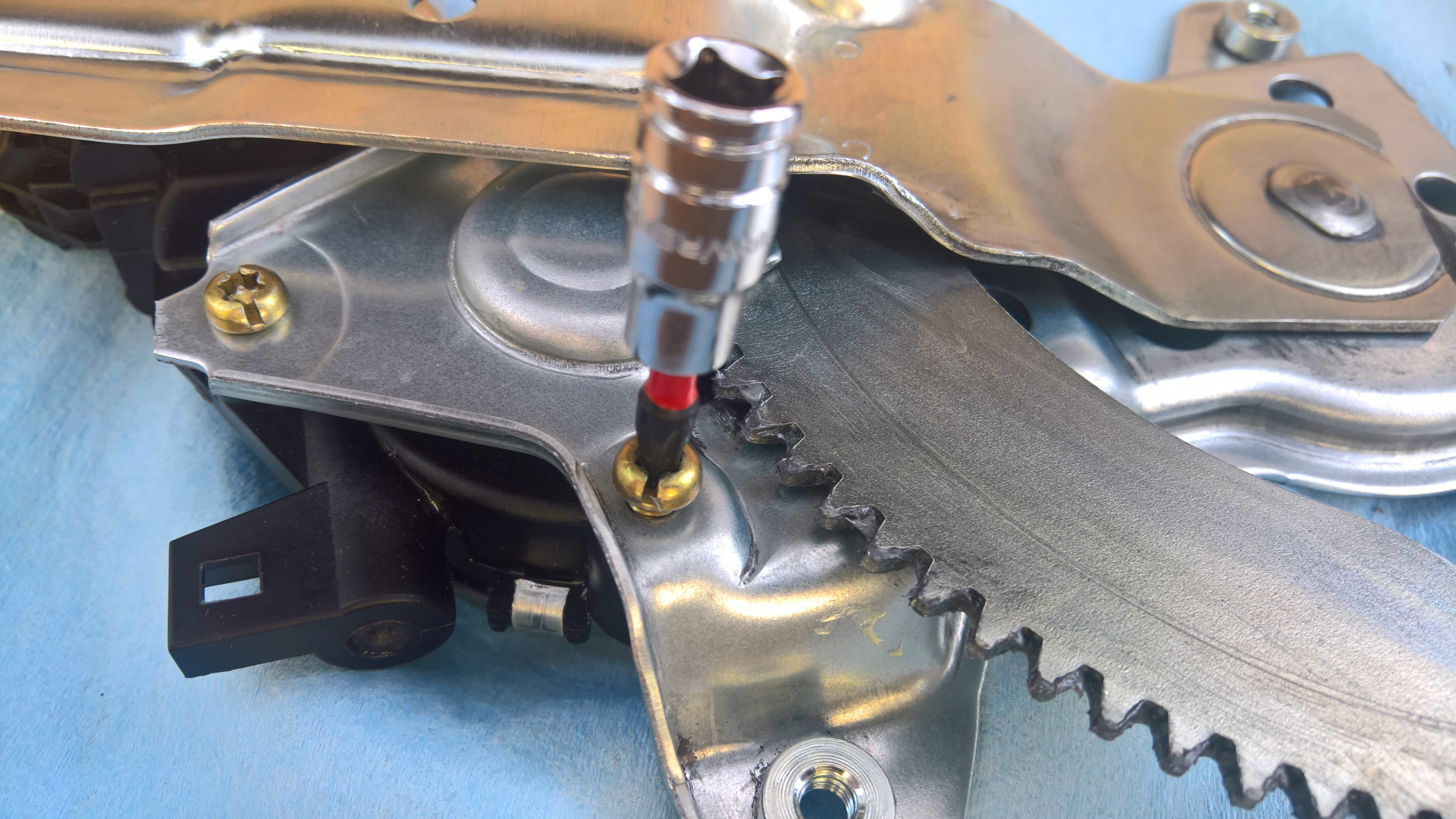 The next photo is looking down from above at the partially open left rear door and rear seat. The motor has been hooked back up to the power harness to move the regulator arm. 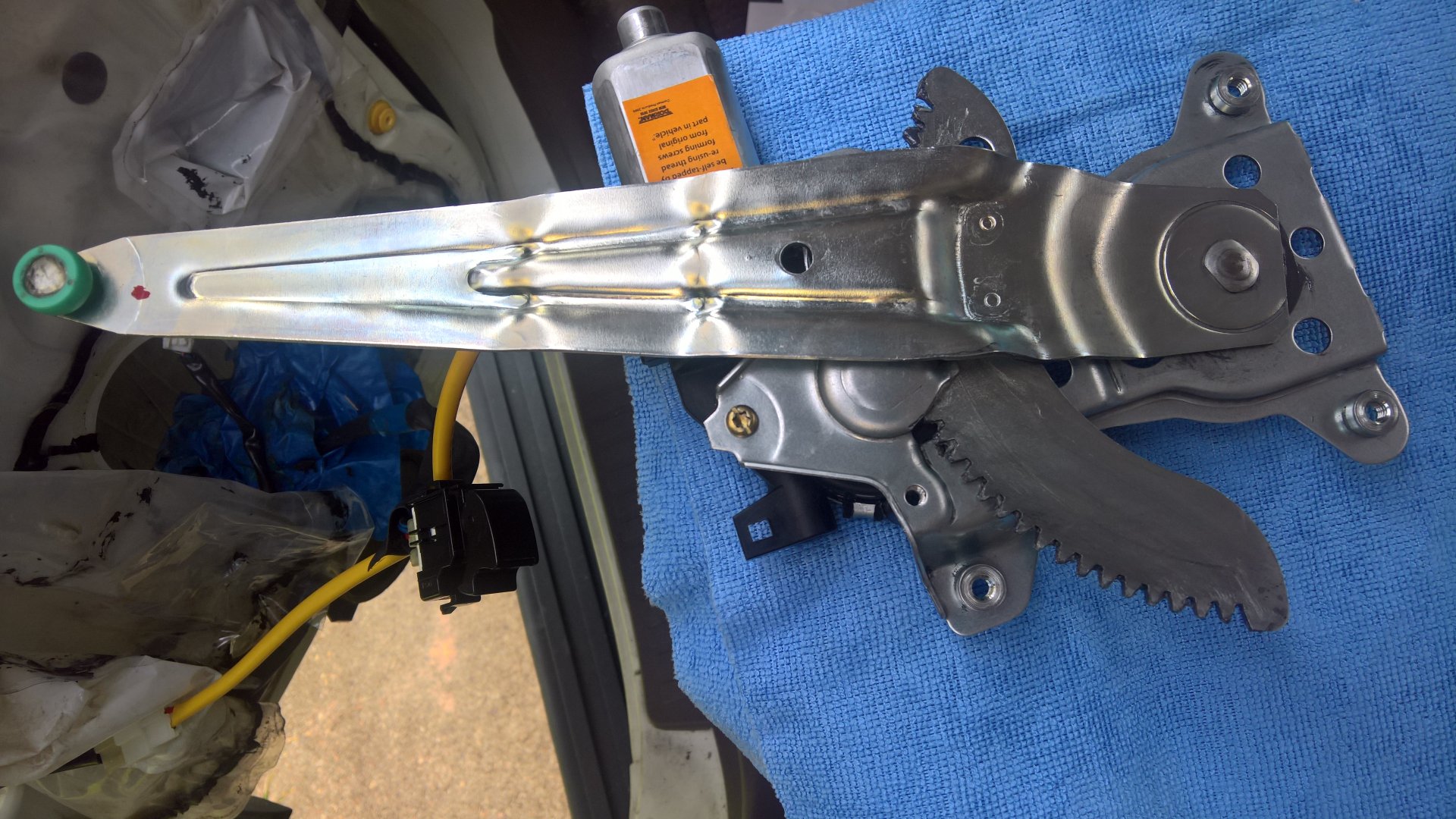 Installed a new rubber glass run in this rear door with the glass in place.

The rubber can be pushed down the channels with the glass in place, lube the rubber with something slick (not thick), and don't leave the rubber out in the sun before you start.

After removing the old rubber I cleaned the channel, not very dirty in my situation. First coated the channel with 3M Cavity wax idea being to decrease the chance for future rust under the rubber (read on).

Dropped the glass to a few inches above full closed, started the rubber down the channels on both sides (longer leg of the rubber goes to the rear). Lubed the rubber (front and back 360') and the channel itself with UV Guard Vinyl/rubber protectant (because I had it laying around) but I'm sure anything slick will work. It did take time, pushing an inch at a time. It became obvious that the 3M Cavity Wax I had applied earlier to the channels (to decrease future rust) likely made it more difficult than it would have been otherwise but then the UV Guard protectant sprayed into the channels helped reverse that.

Once I got the rubber in as far as it would go (about 2/3 down) on the rear channel I then raised the glass all the way up, then reached in (door panel removed) and grabbed the end of the rubber on the rear side and pulled it down. Didn't have to pull the front side down from below, it went all the way down with some persistence and persuasion.

One thing that made it a bit more difficult was that I had left the rubber outside in the sun (95"F) for maybe an hour (while I was inside cooling off) after coating it with the UV protectant and the rubber got very soft. I'm sure it would have gone down the channels easier/quicker if I had left the rubber glass run in the air conditioned house before taking it outside to install.

Note the orientation of the rubber "lips" of the glass run, the fatter side goes on the inside of the glass/vehicle (sorry, photo is slightly out of focus): 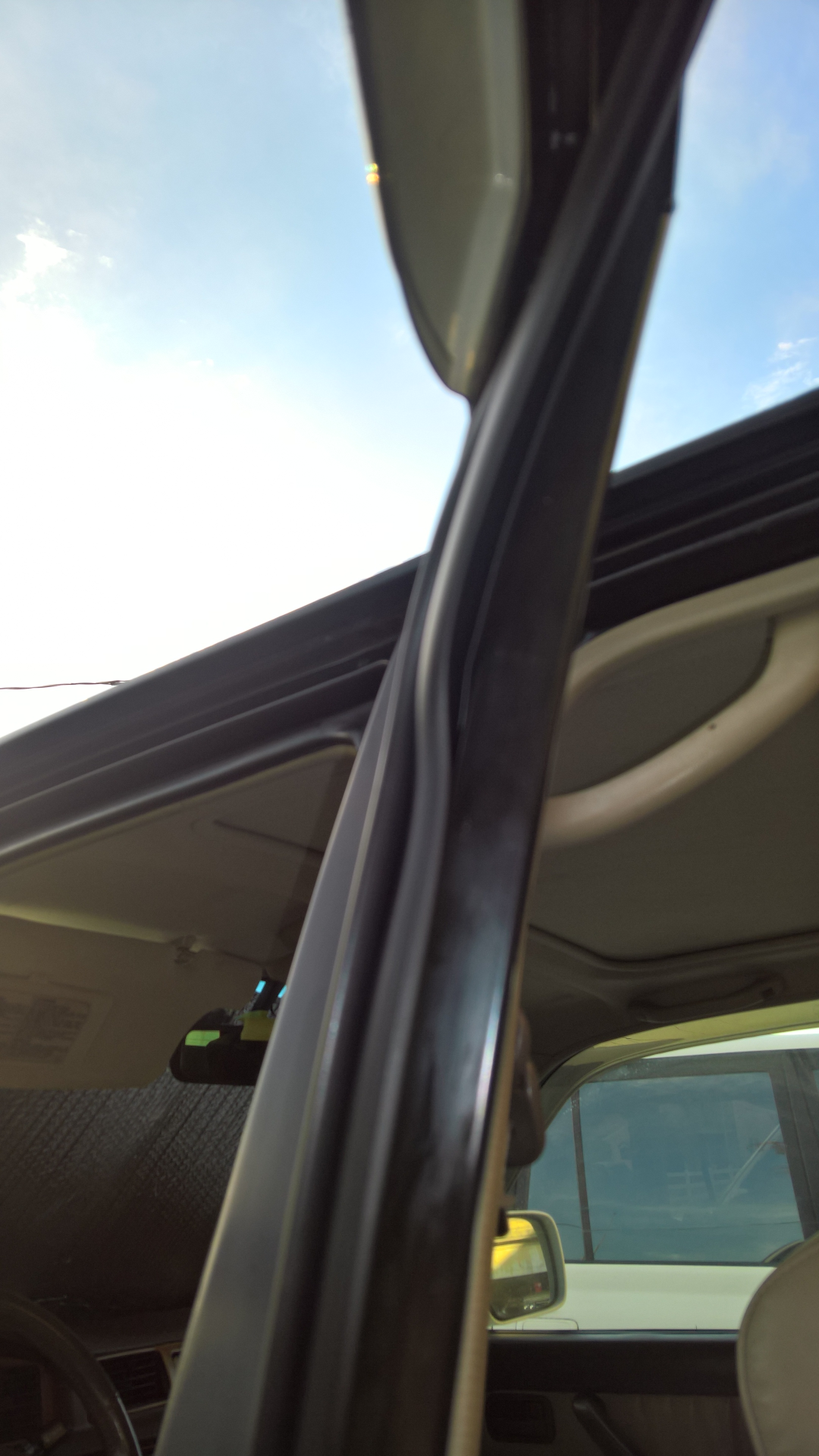 This photo gives an idea of how floppy the rubber got from the heat: 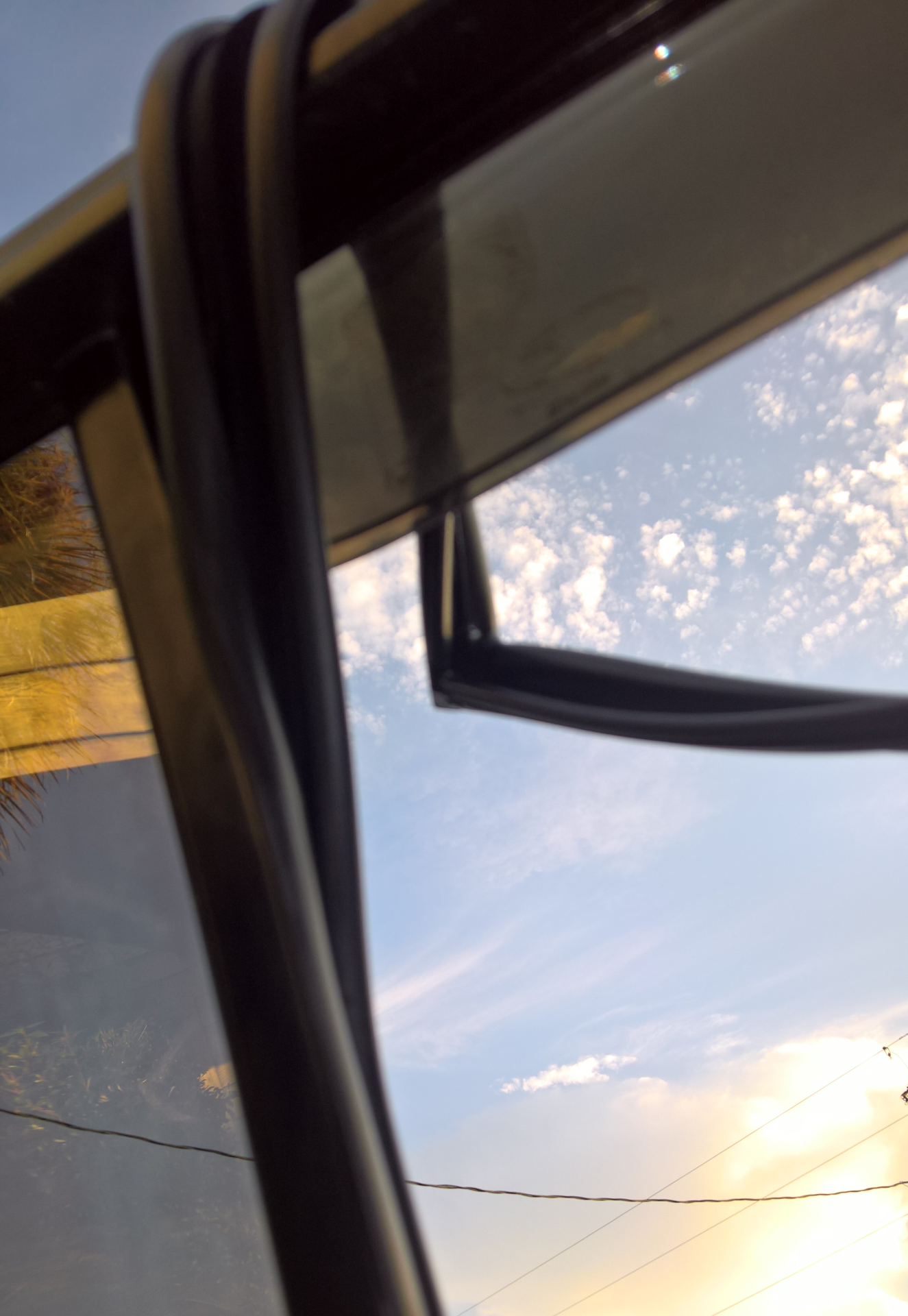 Last photo shows the rear leg of the rubber pulled down the channel, I then pushed it back up a bit. The door panel/card does not have to be removed if the rubber slides down the channel. I had just installed the regulator and motor so it was already open: 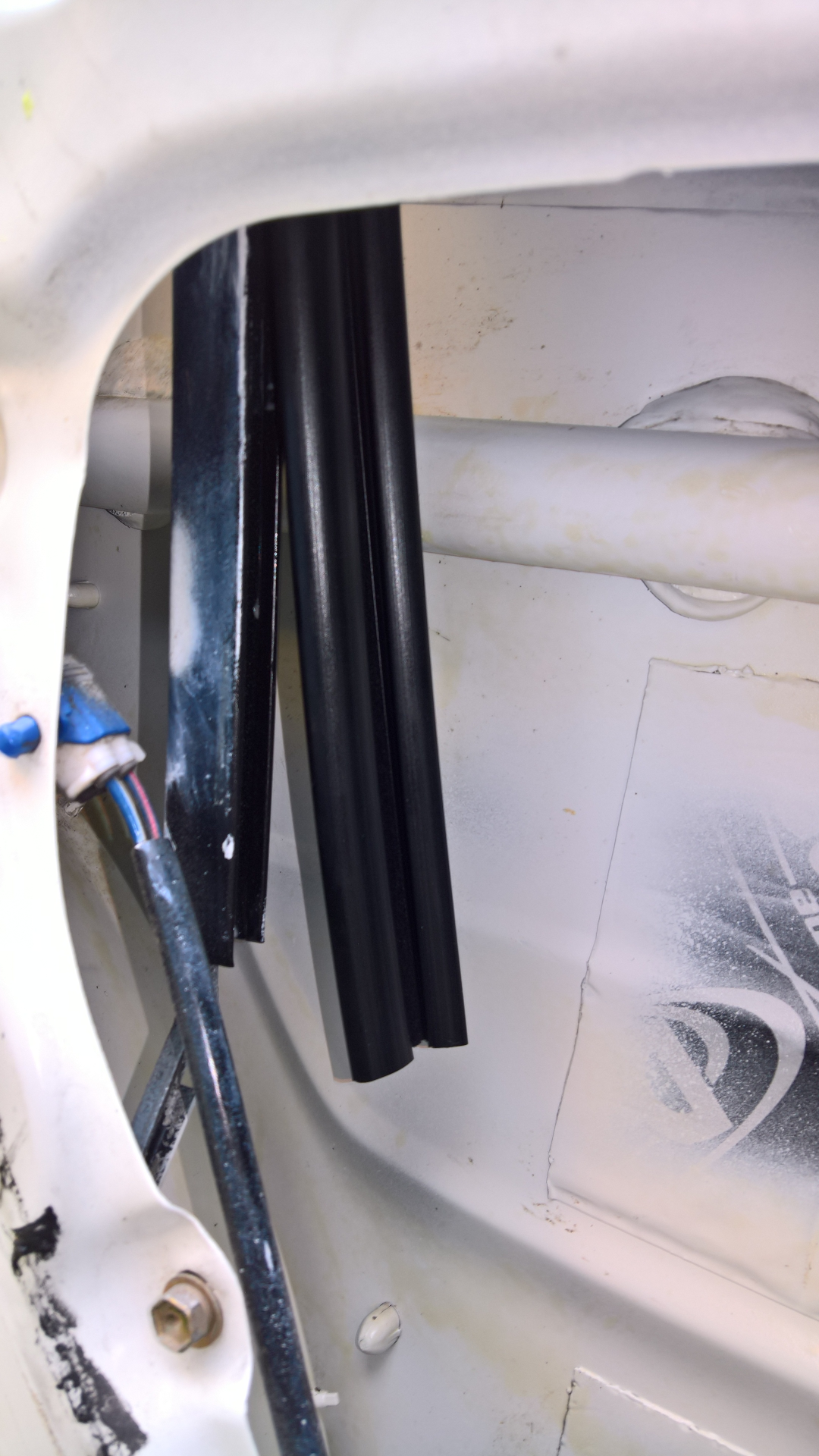 Note in the photo above the tan/yellowish streaks on the interior of the door cavity; that's 3M Cavity wax I sprayed on after cleaning, priming, painting, adding lumps of Butyl rubber over the original foam adhesive between the crash bar and outer door skin, and adding sound dampening material. FWIW
Last edited: Aug 8, 2022
1995 FZJ-80 Locked (US spec)
1996 FZJ-80 Locked (US spec)
1997 FZJ-80 (US spec)
You must log in or register to reply here.