In with old AM-FM

Years ago I stashed away a Toyota radio out of a 60 I found in a yard. When my aftermarket stereo died recently, I couldn't find a new radio to fit so I dusted off this old one and slipped it in.

It didn't have a lot of power but the tuner section was pulling in stations like no other radio had done before. Great for me since I listen to a lot of AM while driving.

I decided to invest a few dollars into it and had it tuned up adding a pre-amp out stage and an AUX-in so I could connect it to my iPod. I added a cheap mini-amp and wow, this brick in the wall of junk radios turned out to another cool part of my 40.

Only problem is, I was much younger and less patient when I originally found the radio so I never took the time to look through the 60 to find the radio face plate or the knobs.

I wonder if anyone on the board has a radio face plate for a 40 or perhaps the knobs for the radio they wouldn't mind selling. Or, even suggestions on other Toyota models with matching face plates/knobs that I could more easily source.

ps. I'll admit it's strange to be putting in an old AM-FM radio when everyone else has DVD/GPS units but, what can I say, I like the simplicity of it and how well it works as a radio. 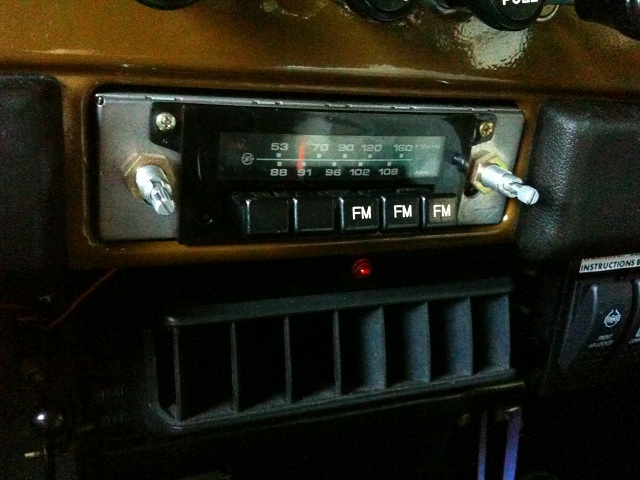 That's a great idea. It will look great when you find plate and knobs. Where did you have the upgrades done?
M

Its funny I took our out years ago when I upgraded but I held on to the radios, glad I did. How did you add on the auxs? Thanks, MIke
Mike Hanson

I had the tuning/mods done at a local electronics repair shop in Sacramento, CA -- called Ray's.

They also have some add on kit that ties an AUX in line to the input stage.

They replaced the bulbs and lubbed the buttons so it really works like new.

Ah, the gold old days -- limited to just 2 AM stations and 3 FM ones. As it turns out that's all I need.

Hope I can find the faceplate/knobs somewhere.

I have no idea on how they did it, (I am not very teck smart on radios...I actually did 4 or 5 years in my CJ7 daily driver with no radio at all...and never missed it) but love the idea of the AUX input...this would work for MP3, or CD correct?

Now I am looking for a 60 'Toyota' radio to do something similar...

B
Introduction - Meet the "Old Girl"