My SM420 has a plate and serial much like Pin_Head's only my date tag has spaces between characters and a one digit final number, it reads "D 2 8" Now I know the D-2 means it was cast on the 2nd of April, but how do I interpret the single 8? It looks like the screw next to the eight may have smashed over the final number if there was a 2 digit number, but then it would no longer be an SM420 cause they quit makin them in '67. It does look exactly like Pin Head's judging from his pics.
Does Napa carry the seal thats inside the nose cone of the input shaft? It wasn't included in my gasket kit, nor do I think its included in the rebuild Kit from Stick Only Transmissions, judging from Pin Head's description of the kit. Any info is welcome! Thanks in advance.
'74 FJ40

Well now I'm not sure that it is an SM420, the drivers side does not look like the one pictured in Charlie's writeup, whereas the passenger side with the serials looks exactly the same. It also has a reverse light switch, which would indicate that it was a '67 model, or someone had retrofitted it. However, the input gear is the correct spline count, the nose cone looks like an SM420 one, and the bolt pattern on the rear appears to line up correctly with the SG adapter. I counted gear ratio roughly in first, coming out at around 6.25-6.75, not 7. Its hard to determine if first is synchronized or not with the transmission on the floor and not having time to take off the top cover. When I asked my mechanic how old the truck was, he said he would be suprised if it was as new as '67, but the insides of the tranny look/feel new (other than the normal fine shavings on the magnet). It was bolted to a 6 cylinder, and I doubt they have been putting many I-6's in recent tow trucks. We'll see. Anyone have any pics of an SM465? Oh yeah its about 12 inches long, I thought 420's were supposed to be about 10.5" ???
'74 FJ40 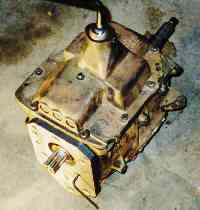 http://www.off-road.com/jeep/tech/convtrans/gm/gmsm420id.html
Everything you need...yours doesn't look like a 420 to me...
TornadoAlleyCruisers
TLCA President Emeritus
T

Hey, you got no pasenger side bulge! Is it a New Process? np435 was used mostly in Fords but also in a few GM and Dodge trucks. 6.7:1 granny.
The garage is no place to park an automobile. (TLCA-14131)

Yeah the passenger side bulge is what clued me in. I think it may be a SM465. DAMNIT!! This was my last hope, I tried every other junkyard in the phone book.
'74 FJ40
T

Well the easy difference between 420 and 465 is the location of reverse:

The 465 is a tough sob. Nothing wrong with it other than a slightly higher low gear. But I guess that would force you into a spud shaft type adaptor rather than the plate adaptor. Bummer.

The wrecking yard here has a bunch of old Chev pickups with 420s in them. Want me to mail you one?
The garage is no place to park an automobile. (TLCA-14131)

Yeah I have a 465, its reverse is right and down. i like the spring thing it has that prevents you from shifting into R unless you really mean too. Well now I have to decide if I will drop in this excelent condition 465 and sell my 420 adapters to buy a 465 adapter or make money on the 465 (I got a steal) and continue my search for a 420. The 465 does shift reaaalllly smoothly so I'm beginning to lean towards it since my 40 is a DD, but its gonna cost me.
What would you do?
'74 FJ40
T

I have limited experience, but here are a couple of considerations.

(+) 465 parts are more readily available, at least here in Montana. And the 420s are older and maybe more likely to need bearings and synchros.

(-) The spud shaft type adaptor for the 465 is ~5 extra inches that you will have to deal with. Might mean a real short rear driveshaft. A hassle unless you move the engine forward. But that's maybe not an option for the stock 6. Are you keeping the 6?

(+) Lots of rock crawler folks out there so it might be easy to sell the hardware you don't need.

(-) You usually can't sell for what you paid, so the new adaptor is going to hurt. I don't know if you need a different bell housing adaptor or not.

(+ or -) Since you almost stole the 465 you can think of the extra expense of using it as instant karma! Or just that sometimes you eat the bear and sometimes the bear eats you. Might be about a wash in the long run.

So that's, let's see, uh, 2 pluses, 2 minuses, and uh well 1 ambiguous. That averages out to uh well uh hmmm looks like yeah no maybe hmmm well let's see I think I'm yes well it appears I'm a fence sitter. Just like usual! Sorry about that.
The garage is no place to park an automobile. (TLCA-14131)

Thanks for the thoughts theo, right now I'm leaning towards keeping what appears to be a 465 (I have its bellhousing too), and if I or anyone I know ever does a v8 conversion, it would be a great tranny to use. I'm still on the hunt for a 420, unless this turns out to be a mystery in between transition 465-420. ??? Thanks guys. Did they make 465's in the 1980's? If so this would be a 465 from the 80's that was transplanted into a older tow truck with a PTO fitted to it. Never heard of that but anything's possible.
'74 FJ40

Even though it doesn't say 465 anywhere on it, I think thats what it is. Must have been retrofitted cause the truck it came off of was very old. Is a complete SM465 tranny in excelent condition + non-aluminum(too dirty to tell if its steel or cast Iron) bellhousing (I was gonna just throw the tranny in, doesn't need synchros, bearings or seals.) worth $150? Because if its worth less than that I will return it, if not just hang on to it, who knows when Hammerhead might finally talk me into doing a 350 convo. ???
'74 FJ40
J

You can get a plate adapter for your 465 from Classic Crusiers in Salida CO. I have one waiting to go in my 40 but no $$ for drive lines right now. I opened mine and replaced the bearings and bushings- one HD puppy.

if bell is half it is cast, never seen a factory steel chevy bell, alum or cast.
if bell is whole, it is alum. Some of the early cast have mounts built in them, and are indexed for a 420, if this looks like yours check your index on your trans to see if it is 420 size or 465 size? this matters if you replace and or need parts later.

PTOs are a yes.

driving a 420 v 465 there is little difference between them, both pretty slow gear to gear.

A good shifter from a 465 brings up to $75, seems they break easy. I have only broken one.

420 are not as popular as the 465 here but seen a few go by, into the shed.LOL
CONTACT ME VIA EMAIL, click me

TONS FOR SALE <<<CLICK ME
"everyone has different experiences and different opinions"
My posts "greatly based on my observations and opinions" and "TO EACH HIS OWN"
You must log in or register to reply here.