Help with placing fair price on my rig? (1 Viewer)

I think it's time for my rig and I to part ways. I don't want to rip off the potential buyer so I figured you guys would know best!
It's not the right fit for me. In almost every application I used it for; there was some issue. Whether it was just too big, too high off the ground, too loud. The list goes on. Sad part is I do actually like it. A lot.. But I don't have the space to keep it and will be getting an awd sedan which realistically is all I need for all seasons. I camp and mountain bike in the spring and summer; but a roof rack solves that problem...

Anyway... The mods are in my sig line. It has 238k miles. I replaced the trans with one that has 150k miles on it. Replaced the trans fluid again 2 weeks ago just to do it. Brakes have been redone; fuel pump replaced and rewired; remote starter with lock/unlock. New radio for iphone compatibility. All fluids changed. It does drip oil from somewhere but it's not bad. The power steering pump leaks. I'll probably get it fixed before I let it go. It's reliable; just not right for me...
Though it does have an exhaust leak; but it's not all that loud for me to care about.
It landed in a ditch a few months ago so the drivers side fender needs to be replaced. The rear hatch is replaced, but it's black so it doesn't match. I was going to repaint it mid spring/summer but I dont think I'll keep it that long so the price mus reflect that.
I'll add real time photos this evening when I get home.

What would be a fair price to list it for


edit: here are some photos as is sits right now 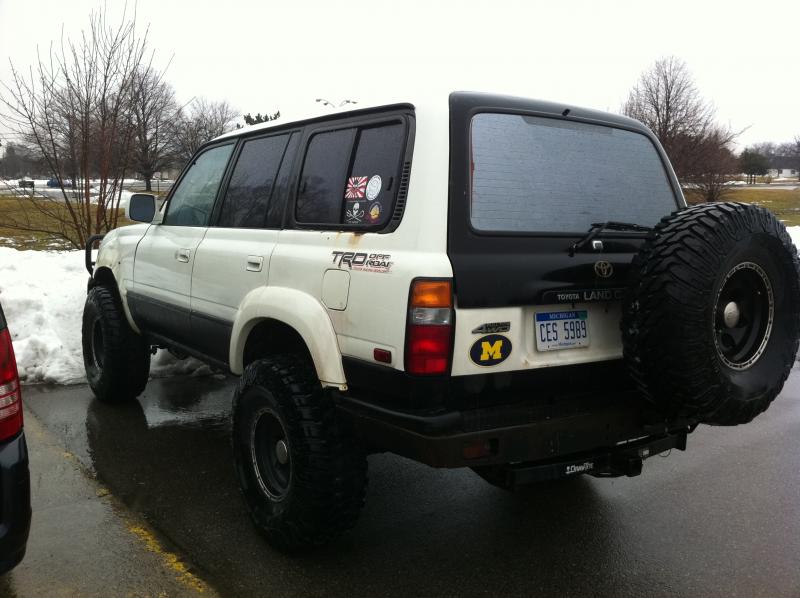 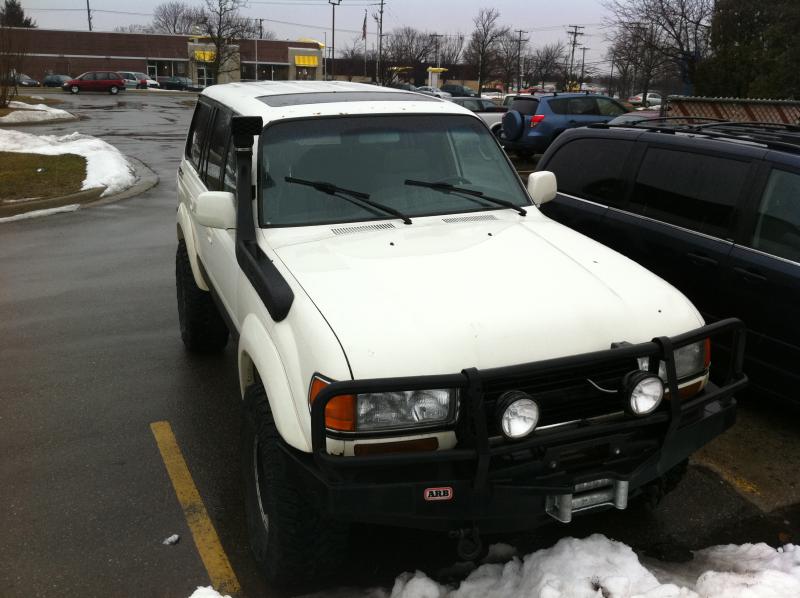 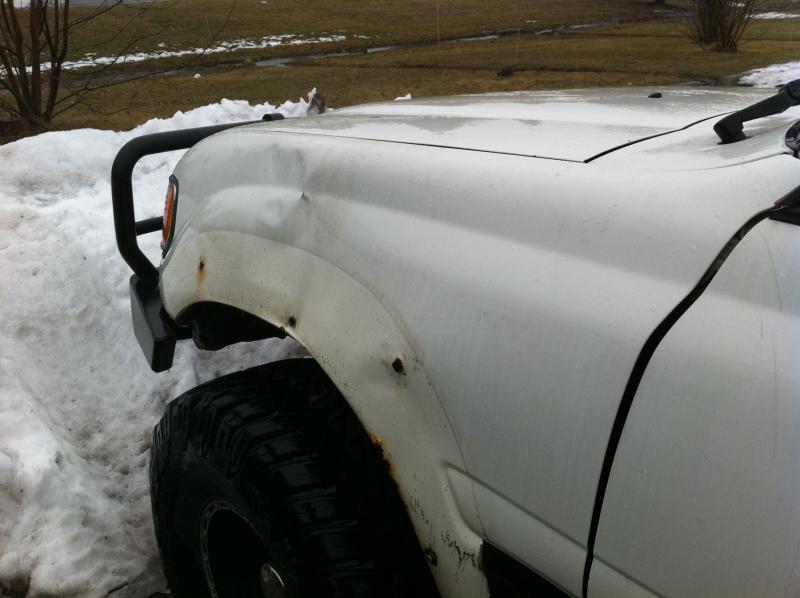 I'd agree with that as an asking price. To a potential buyer, John Q Public, NOT John Q. Toyota-lover, there are many strikes against it being a good purchase.

1) Little issue going on the Middle East, causing rapid pump-$ increase would scare a lot of folks off of buying something that gets s*** fuel econ-

2) Body damage, and two-toner one-owner syndrome. That is a car with body parts from another car that are the wrong color.

But it also sounds like it's got some stuff going for it too. I would never worry about ripping anyone off. Just list it for what you feel it's worth...see what happens and go from there.

You can always lower your $$$, but it's much harder to raise it, after it's listed

Whoa...that sig line has some spendy stuff in it. You might wanna part off some of the easy to get off items, then sell it. I know I'd be interested in the bumper, and could provide a replacement bumper.

Really hard to recoup the cost of stuff like that on re-sale!
V

couple more pics of outside. inside is gray and in decent shape...nothing special or abnormal.. 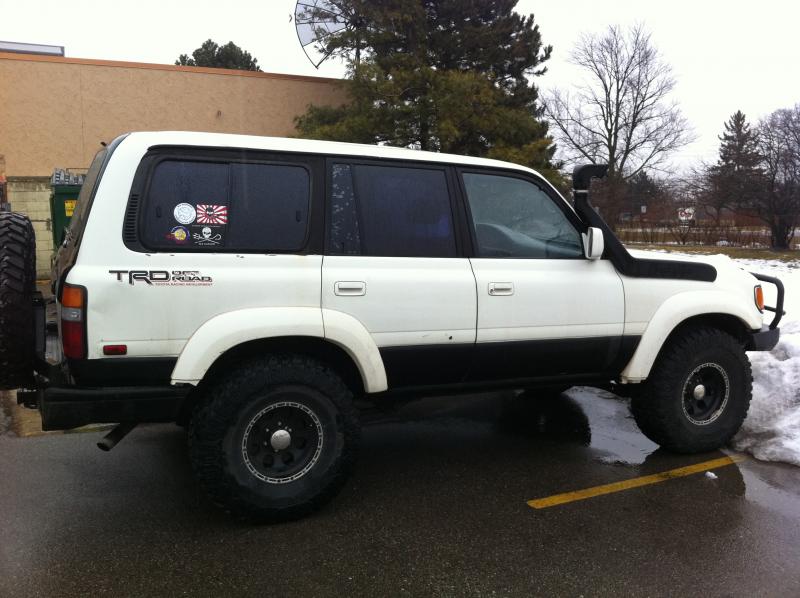 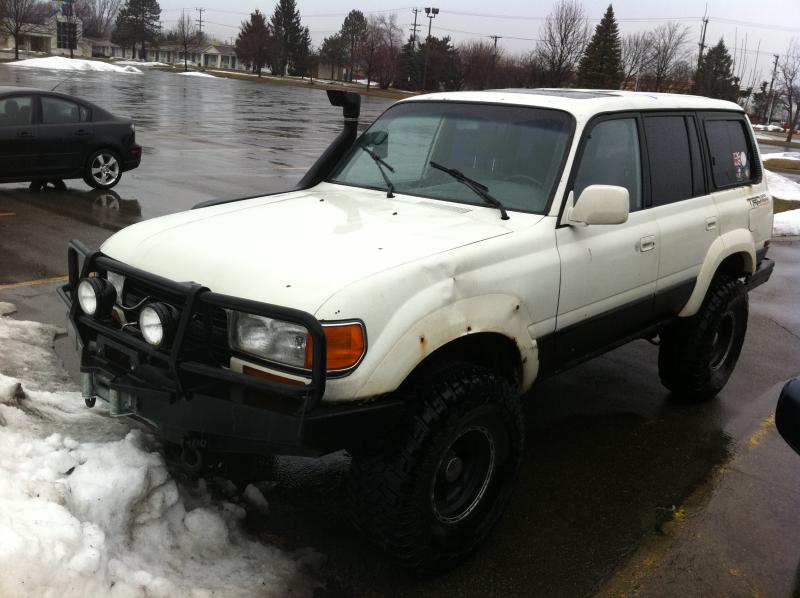 From an appearance standpoint the black hatch kind of works!
P

You'd probably do better selling the bumpers and winch separately.

If you parted it you would make alot more than 3k.
But that is alot of work.

if you were near NC i'd give you three RIGHT NOW

If I were in your shoes I'd part out the $ items and then sell it for 2-3K. The ARB, Tires/wheels, TJM and maybe snorkel would be easy money that would get you a lot more in the classifieds here than if they stay on the rig. Just my .02

drive to NC, ill buy your flight home and give you 3k..

Yeah. Where are you? I'd be interested in the f/r bumpers too!
V

Im located in Ann Arbor, Michigan.
Also, i dont want to sound like a douche, but 3k seems like a ripoff on my end. i dont know, maybe im insane and i think its worth more than it really is; my friend bought a 93 toyota corolla for 3k...i was thinking under 5, but not 3... lol.

Uncle Grumpy said:
It'd be worth more if you got rid of that Michigan sticker

YOU BITE YOUR TONGUE!

Vasir said:
Im located in Ann Arbor, Michigan.
Also, i dont want to sound like a douche, but 3k seems like a ripoff on my end. i dont know, maybe im insane and i think its worth more than it really is; my friend bought a 93 toyota corolla for 3k...i was thinking under 5, but not 3... lol.
Click to expand...

The problem is the rust, rust under the rear window, what looks like rust in the front fenders, and I'm guessing the rear hatch was replaced because of rust. I imagine the frame and axles are pretty rusted too. You can get CA and AZ trucks for with no rust for 5K.
V

freshspecbluegt said:
I don't want to sound harsh but......

The problem is the rust, rust under the rear window, what looks like rust in the front fenders, and I'm guessing the rear hatch was replaced because of rust. I imagine the frame and axles are pretty rusted too. You can get CA and AZ trucks for with no rust for 5K.
Click to expand...

the prev owner started going at it with a orbital and took the paint to the metal. there is rust. but not like some rust you'd see here. part of the reason i was going to have it repainted before my mishaps with the fender; and rear door was because of the attacking with the sander under the rear windows. the rear door was replaced because to backed into a tree branch..
but fair enough arguement accepted.

I am kinda rust phobic, but I think you are in the right. If you sell it as is, and don't take any parts off, at a minimum $4000. This is not a mint truck, and you know that, but if you are not in a hurry to sell it, you will find the right buyer that will appreciate what you have. Fix the few little leaks, and sell it to a true cruiser lover!

Fix the leaks and keep it b/c you will regret not having it!!!
You must log in or register to reply here.

S
Right Hand Drive in US