Help! She died today and won't turn over -UPDATE it's a spun bearing (1 Viewer)

A little update. I got the 77 2F from Mark over to Empire for the rebuild. Gonna be a few months probably but I feel really good about what they'll do, assuming the engine is in good order when they break it down. I'm definitely gonna have some questions about the oil cooler system, and what I need to source as that gets closer to done. Also creating a list of all the things I need to source to make this 2f go in, which I'll post for everyone to review at some point.

As for the old F, went through the oil pump and it was in great shape. I also got the .25mm bigger bearings in from Houston but they were too big. Didn't even fit between the block and the crank. Looks like the crank hasn't ever been machined. Maybe the 70k original miles is real after all? Either way I, went back to the same place and sourced some standard size bearings and they were pretty much the same size as what I pulled out. Tired to get em in today and hit a pretty major snag. literally...

The top part goes in and spins exactly half way around and then hits a hard stop. Seems like there's a piece of metal hanging down in the top arch on the block above the crank and it catches the bearing. Fabbed up a plastic tool with a notch to grab the oil hole on the bearing and tried to tap it a bit to see if it would go. No go. Pulled it out and I can see there's a pretty good size metal obstruction that's not gonna let the bearing slide all the way around. It made a little mark on the bearing's leading edge, which maybe I'll post a pic of.

Seems like the only way to get that cleaned up is with the crank out of the way, unless you all have some super creative solution. .Probably more than I want to take on for this temporary band aid fix. Think I'll focus my efforts on sourcing what I need for the swap and start prepping everything I can now. Maybe even start pulling this thing now, unless any of you know what I'm dealing with and have an easier fix. Sort of a bummer as I was hoping to get it running again in the interim without pulling the F, but at least I have the final solution in progress now.

Yank it. Prep for the 2f

Cgn1976 said:
The top part goes in and spins exactly half way around and then hits a hard stop.
Click to expand... 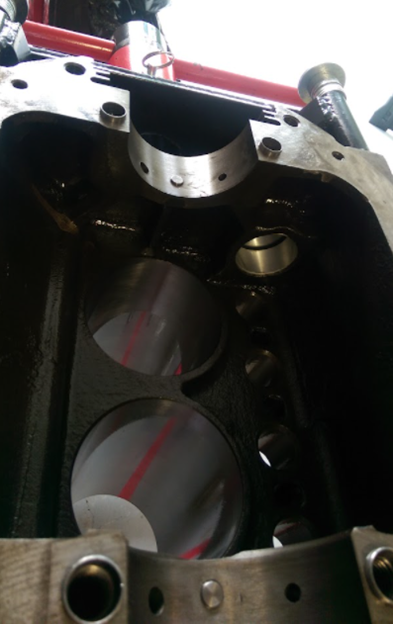 Question, you were able to get the old, upper half of the main bearing out? I do not understand how - unless it was just completely mangled from having spun...

Question, you were able to get the old, upper half of the main bearing out? I do not understand how - unless it was just completely mangled from having spun...
Click to expand...

Thanks for the pics MudDauber. That's 100% what it is. I was able to get the top one out. It scraped as it came around and is dented from the dowel a bit, but It's out. What I don't understand is how anyone is able to slide bearings in around the crank with those dowels on all four crank bearing locations. Seems like the only way to get those in is with the crank out.

Like I said, At this point, I'm moving towards the 2F install, so I'm gonna start the tear down and pull of this one. Maybe I'll tackle the bearings once I get it out, or I might just put this engine out there as is an let somebody else redo it.
Last edited: Nov 1, 2021
You must log in or register to reply here.

Tailgate overhaul in a 73’

For Sale 3 Pigs in Shelbyville, Tennessee (not mine)